Just when you think you’re pretty quick, someone quicker sends a wake-up call to prove you wrong. When this happens, some slip into denial, others step up their game.

For Duck Fuson, unshakable confidence in the capable S30 Datsun 240Z he used to own would eventually come into question during his first on-ramp encounter against a Porsche 911S. That loss opened his eyes to the venerable stallion from Stuttgart. But rather than fight this foe, it's sometimes better to join them. He quickly sold off his Z car and began a new life with Porsches. 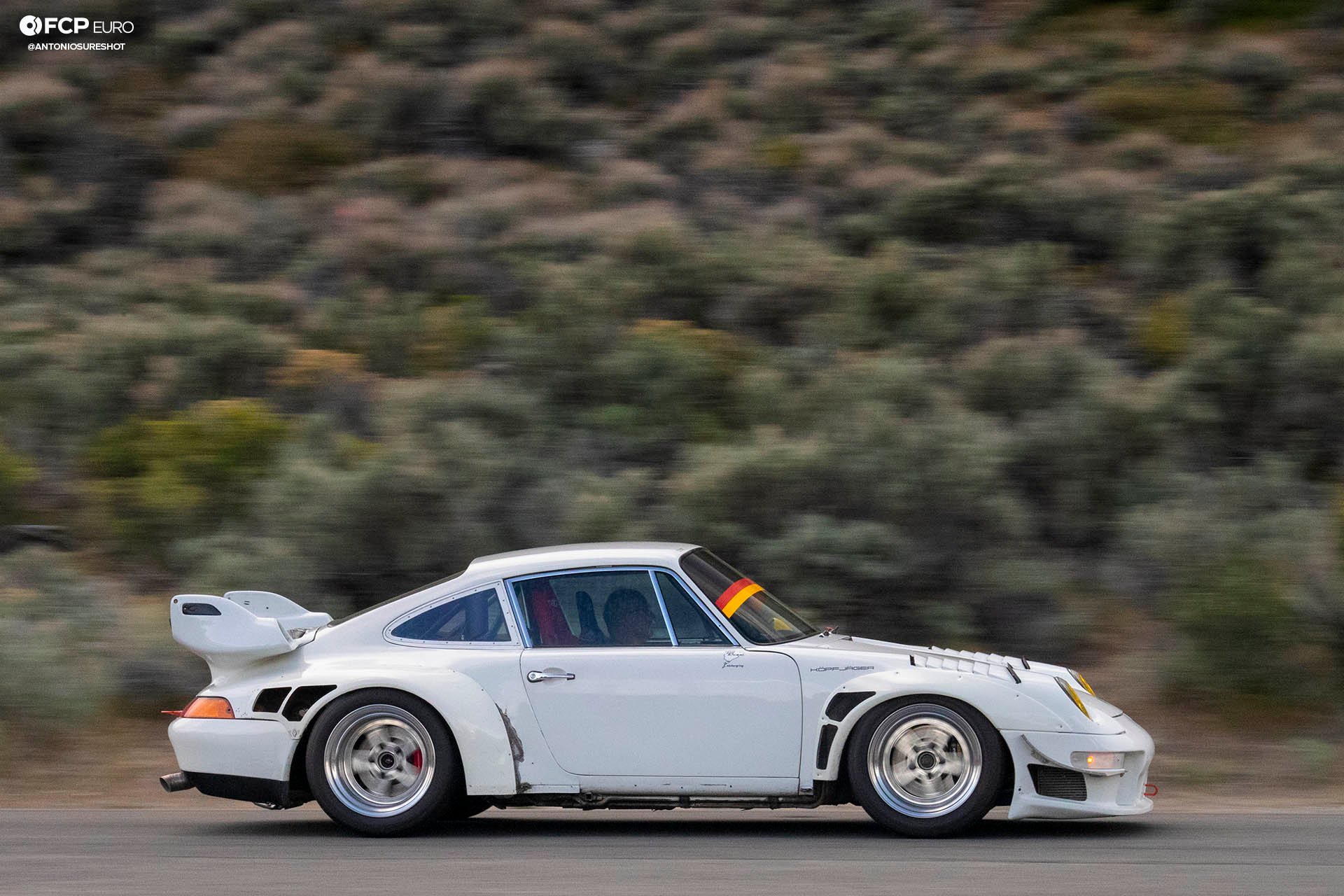 His first Porsche, a 1969 911E, had an upgraded 2.5-liter engine and mild suspension upgrades. He made the regretful decision to let it go to pursue a short-lived interest in motorcycles. He got over his bike phase and set out to undo his mistake when he discovered the machine you see here, a 1974 Porsche 911 (G chassis). Not one to repeat an egregious error, Duck has owned this 911 since 1983. Over the course of more than 35 years, this machine has gone through a progressive metamorphosis that evolved with the competition. 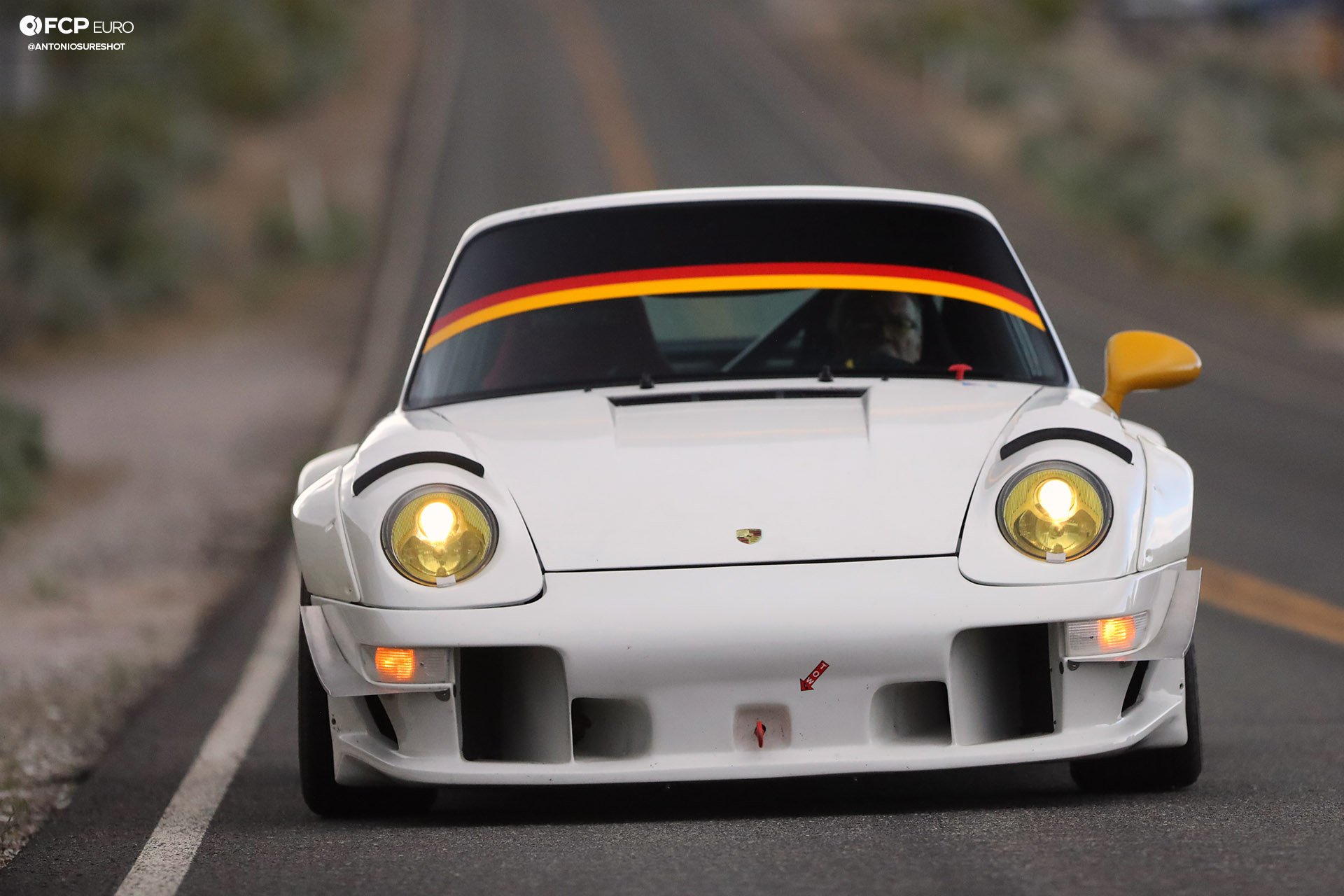 Racer in the know

If you understand the man, you’ll understand the machine. Complacency leads to irrelevance for a competitor, which is why true champions constantly push themselves to improve to stay on top of their game. A real grassroots racer, Duck performs much of the work on his Porsche at home. He constantly looks at ways that his 911 could be improved upon to keep up with and surpass the competition. When upgrades are beyond his means, he turned to experts to ensure the job gets done properly. But that doesn’t mean he is uninformed about what he pays for. On the contrary, he knows exactly what’s been done and how it helps his build improve. 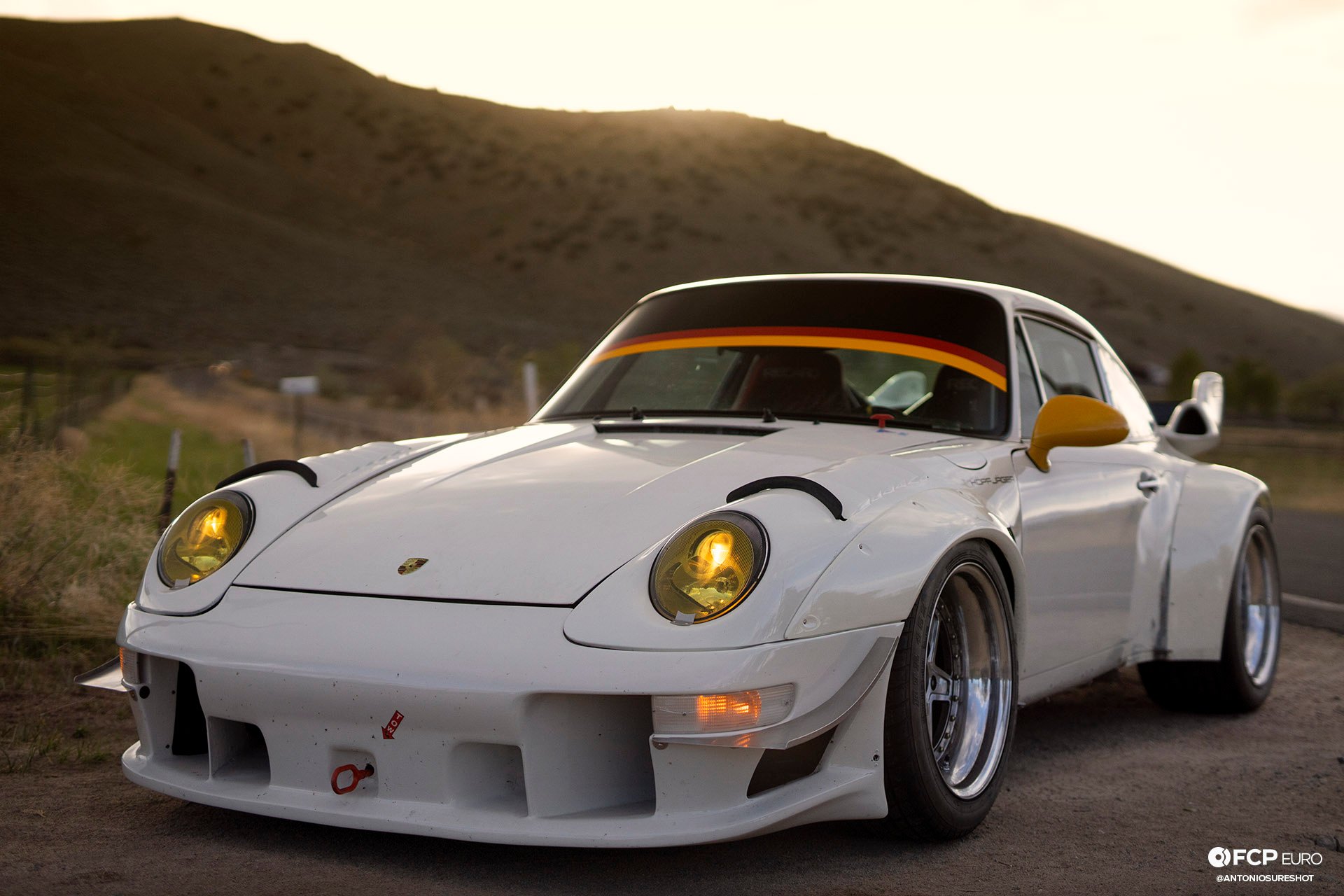 No one could have imagined the steep ramp of popularity that air-cooled Porsches would enjoy. Like most cars, the older 911s would slide down the depreciation curve before hitting the classic stage at 25 years on. When Duck began working on his 911, it was only a nine-year-old car and had not yet bottomed out. People still modified them heavily, and changing the aesthetics was one of the most popular ways to give an older chassis a newer look. During this era, it was relatively popular to make cosmetic modifications to a classic 911, so Duck gave it a facelift. 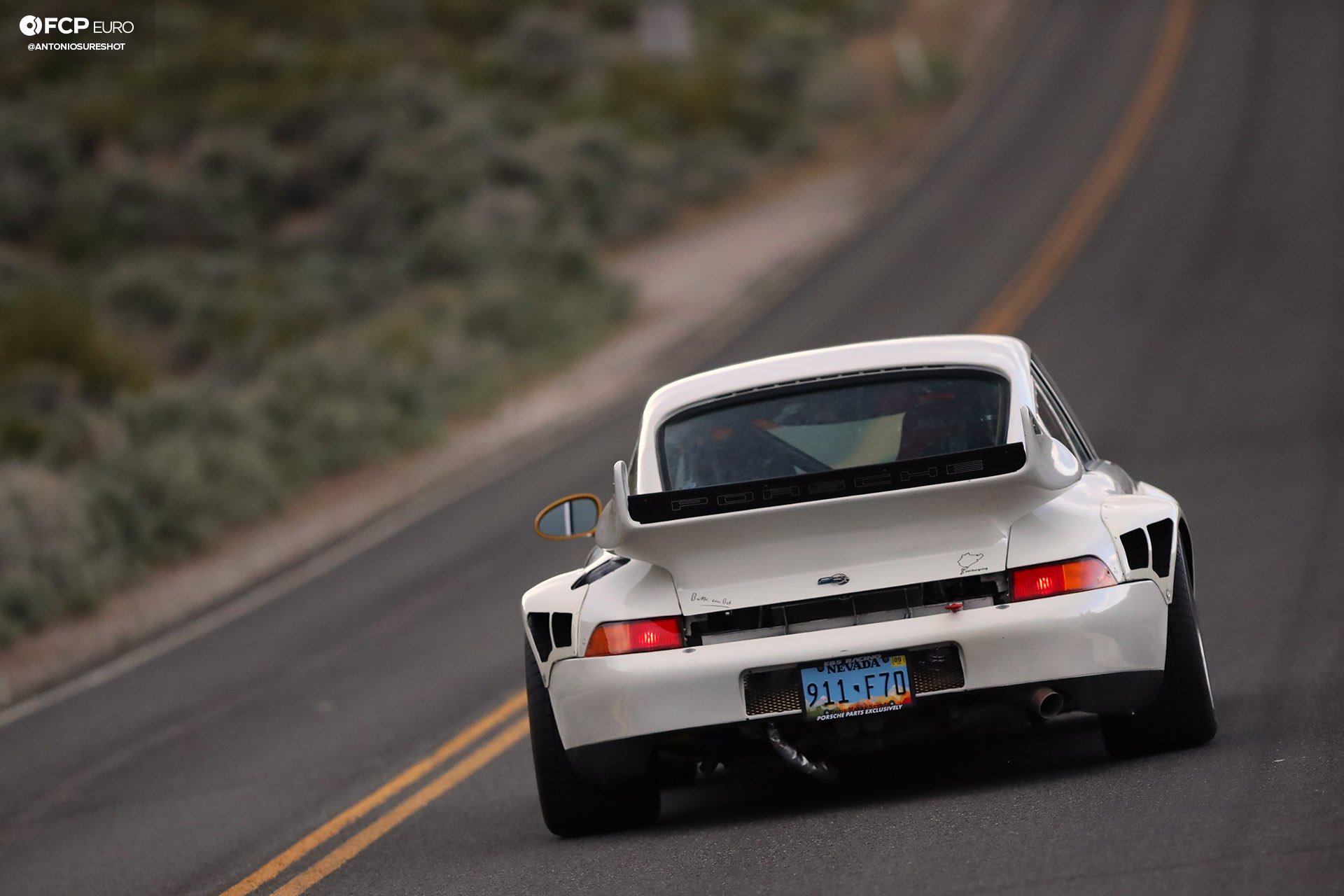 He selected the Getty Design kit, which swells the narrow G chassis with over fenders and a more aggressive 993 fascia, along with broad haunches by way of Getty Design’s rear over-fender kit. This was the “Rauh Welt” kit of that time. Although he removed it at the time of this photo shoot, a GT Racing wing usually mounts to the Getty Design GT engine cover to provide even greater downforce over the drive wheels. 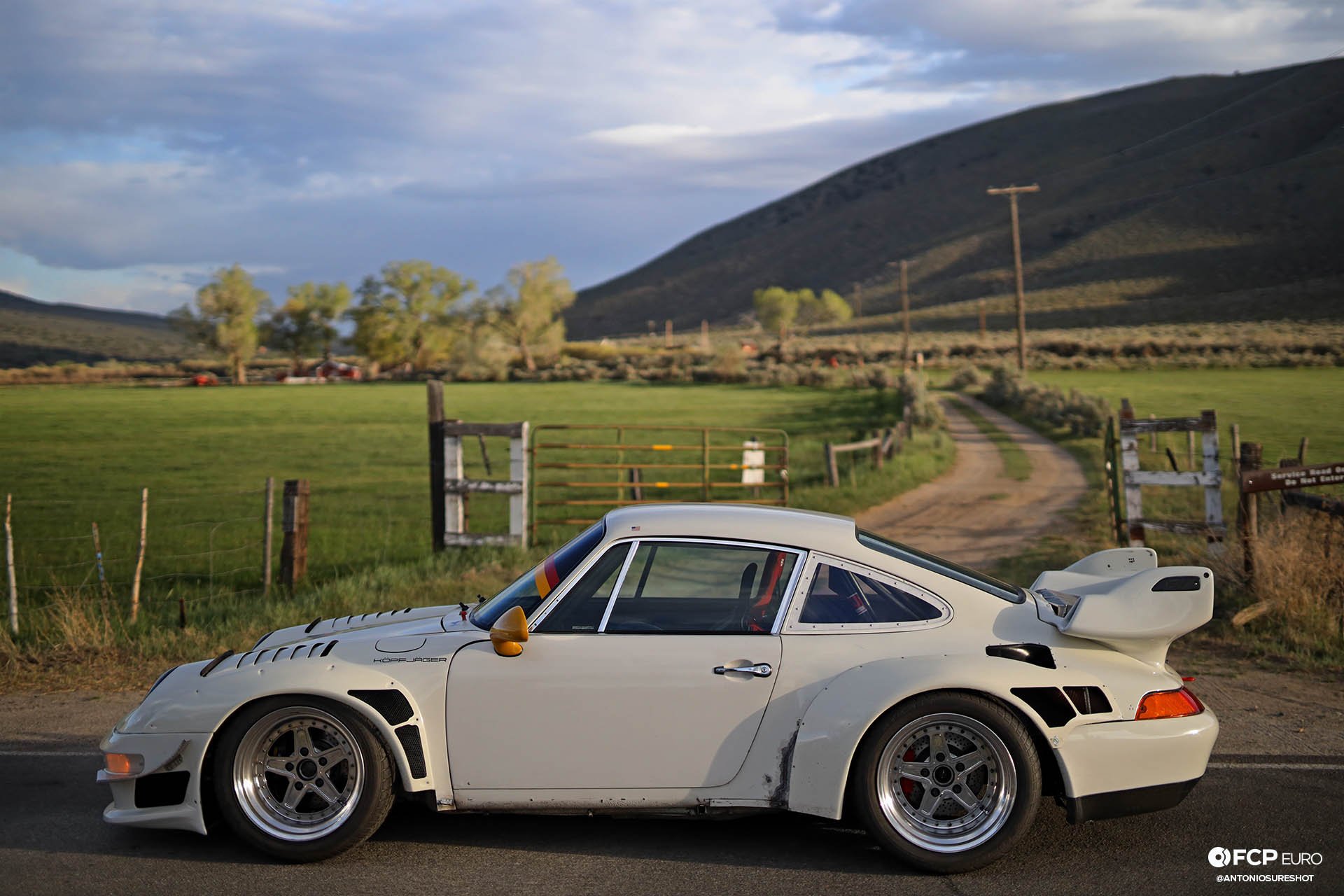 Lending his personal touch to the aerodynamics, he cut vents and fashioned his own louvers into the fenders, placed a NACA duct into the quarter panel to feed cool air to the turbocharger, and made sheet metal side skirts for track usage to help maintain a vacuum under the chassis for optimal downforce. (Since we were driving the car on the street for this photo shoot, Duck decided to remove the skirts for road clearance.) 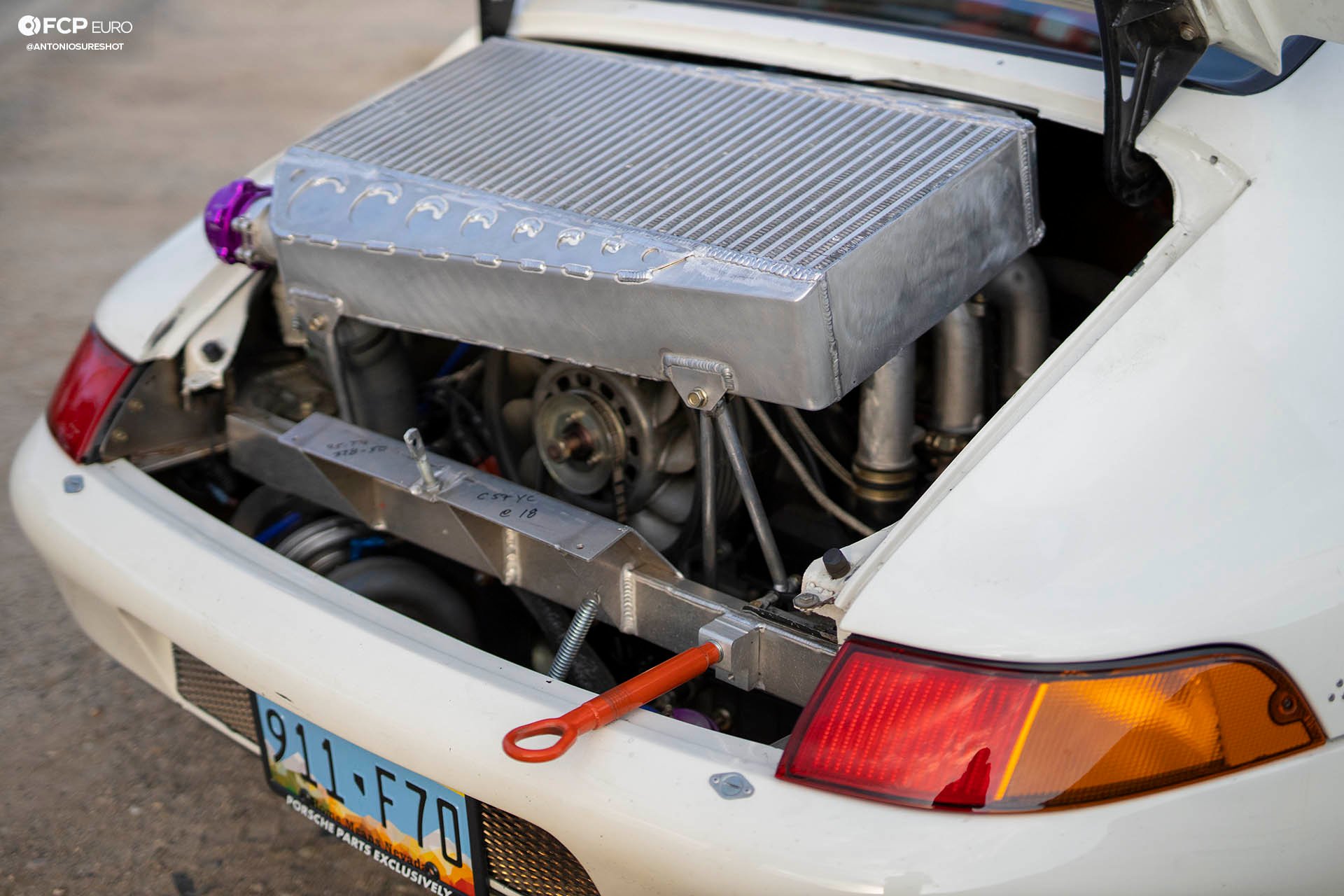 Improving the aesthetics of the 911 addressed only one facet of this gem. The driveline also experienced a significant overhaul. The stock 2.7-liter engine was retired in favor of a more contemporary, air-cooled 3.6-liter M64 engine sourced from a 993 chassis. This engine gave Duck’s 911 a much higher performance ceiling, especially since it had been fortified with JE Pistons in anticipation of forced induction. With the help of an Innovative turbocharger, the engine produced 500 horsepower. With this setup, Duck competed in NASA, SCCA and at various hill climb events. He collected an impressive array of accolades along with the notoriety that comes with capturing podiums. However, even at 500 horsepower, he felt the need for more output to stay competitive.

More Motor for the Mountain

The powertrain was dropped from the chassis and sent to Reno Rennsport to be upgraded. In the hands of Mat Lawrence, a transformation began. After stripping the engine down to its basic components, the cylinders were upgraded to accommodate a set of factory Porsche GT2-spec Mahle pistons in a 102mm bore. Crower connecting rods link the new pistons to the factory crank, yielding an enlarged displacement of 3.8 liters. To improve the volumetric efficiency of the engine, EBS Racing’s mild turbo camshafts lift the valvetrain, composed of EBS Racing valves, springs, and titanium retainers. These components work together to deliver a more usable torque curve. 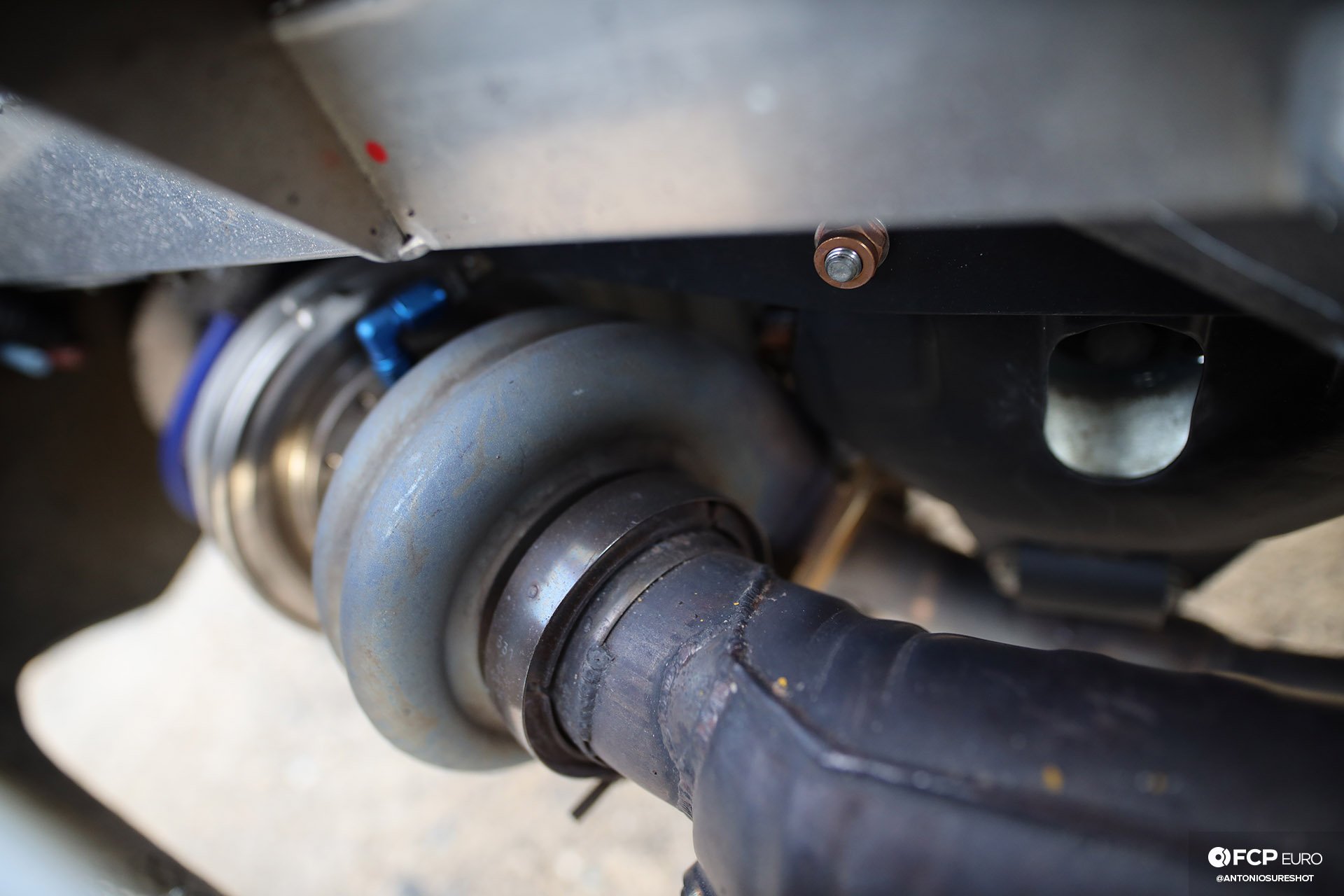 With a more capable engine in place, upgrading the forced induction system proved a must. Duck scrapped the old 67mm journal bearing turbo in favor of a modern BorgWarner EFR 9180 turbocharger. This EFR turbo relies on a dual ceramic ball bearing center housing rotating assembly and a twin-scroll turbine for more efficient spool up. BorgWarner manufactures the EFR turbine wheel from a bespoke alloy called Gamma-Ti, which has a higher heat capacity than traditional Inconel material. The compressor wheel features more efficient aerodynamics and is CNC-machined from a billet of aluminum. In order to mate the EFR 9180 turbo to the exhaust manifold, Duck modified the manifold with a divided flange in order to accommodate the quick-spooling turbocharger. 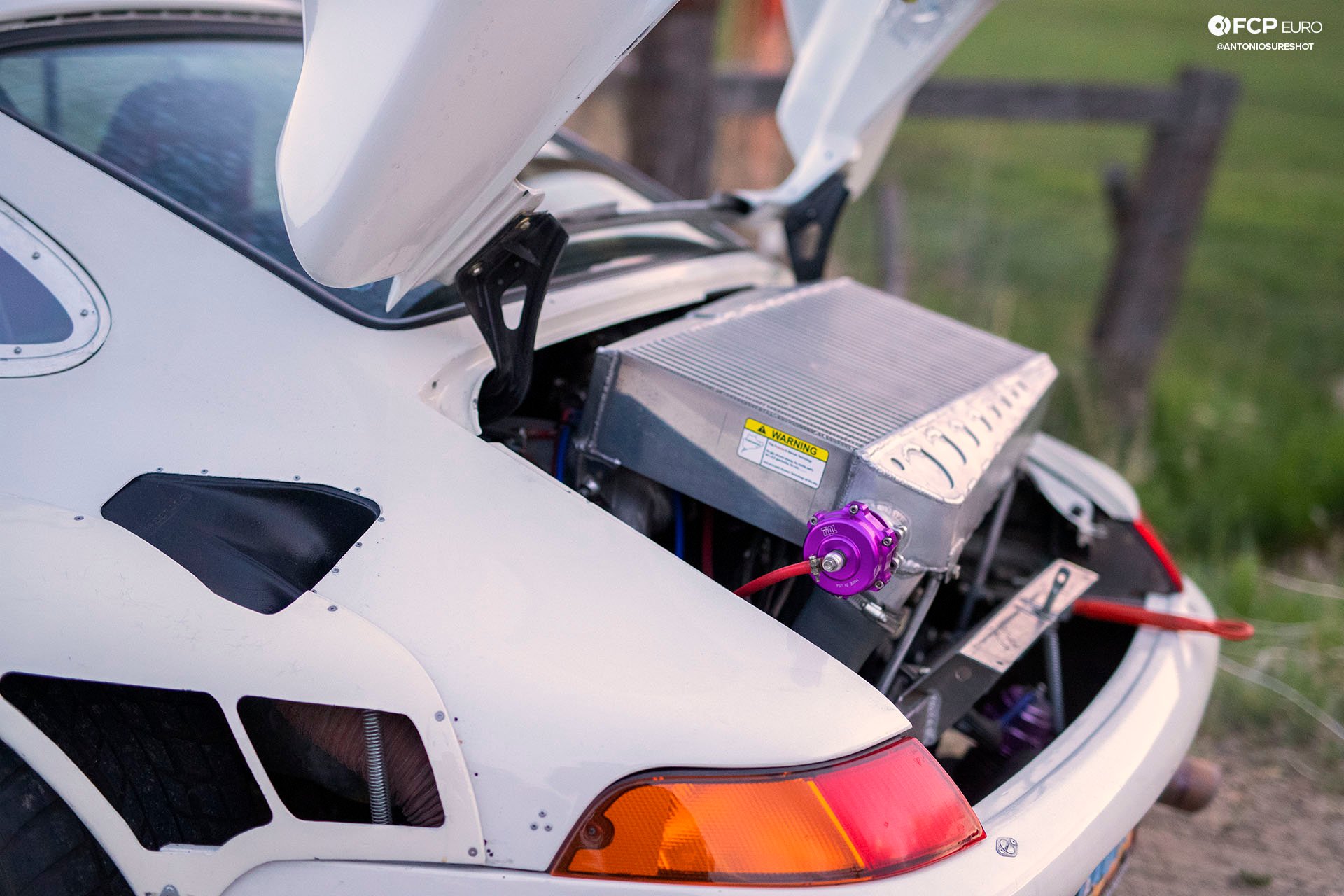 With new intercooler piping joining the EFR’s compressor discharge to the custom end tank of the massive Spearco intercooler, it was ready for engine management tuning. Back at Reno Rennsport, Mat got behind the keyboard and calibrated the Haltech F9A engine management system. At a peak boost of 1.1 BAR (16psi), the 911 put down 800 horsepower and over 600 lb-ft of torque to the wheels. 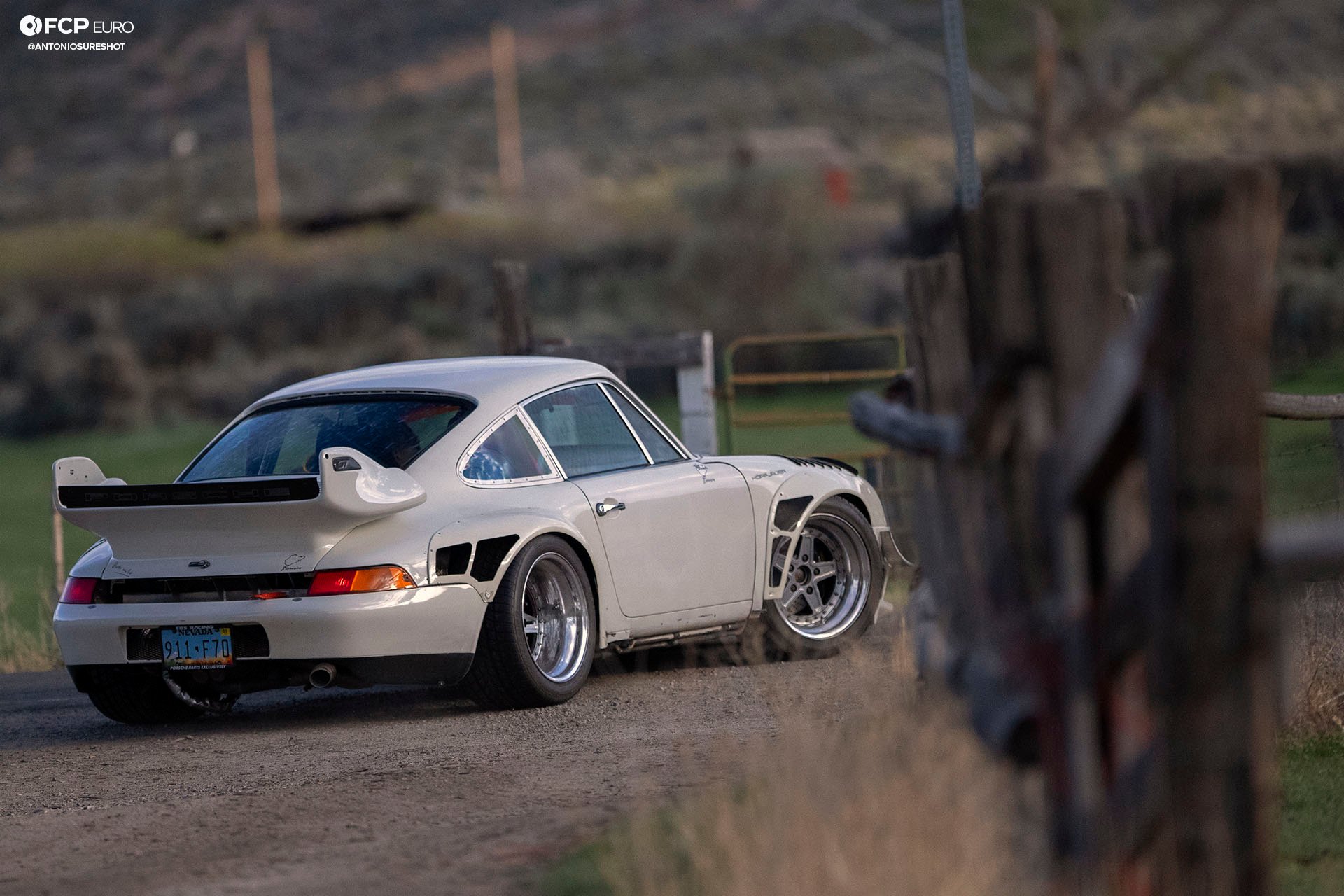 For the track, Duck runs a new set of HRE Wheels with Toyo R888R tires, but for this photo shoot, we didn't have access to a racetrack. Instead, we asked him to drive on loose dirt and gravel filled backroads in the Carson City, NV area, so we mounted up his older, spare set of Bogart wheels. 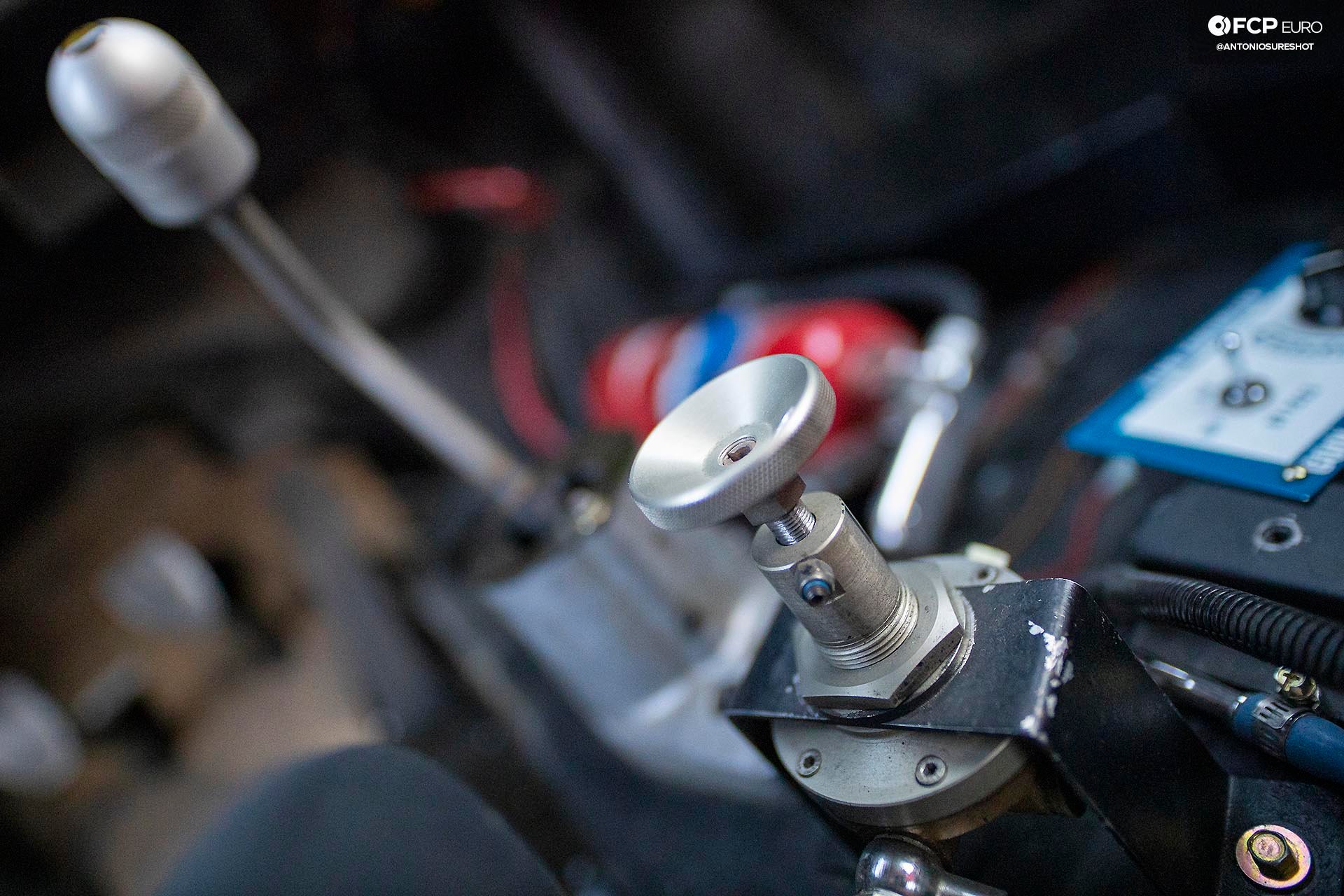 To dial down the boost to around 600 horsepower, an old school manual boost controller from a Porsche 935 takes its place within easy reach of the driver’s seat. Duck noted, “The car is more manageable at the lower boost setting, but if I see someone getting closer in my rear view mirror, I give that boost control a turn to keep them off my bumper.” 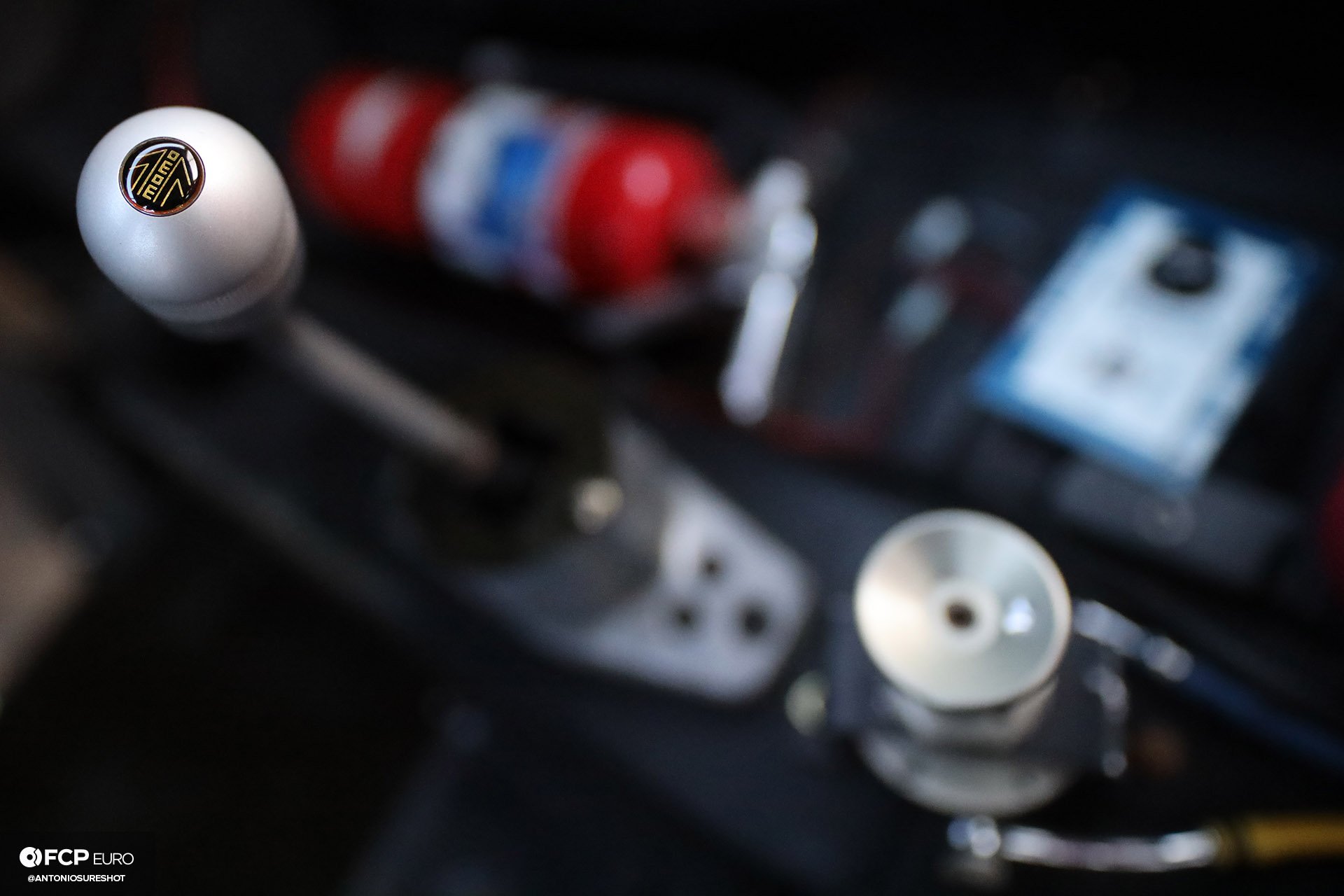 Just in front of the legendary 935 boost controller is one of the most driver-intimate parts of the vehicle, the Porsche 930 gear shifter, with an aluminum Momo DTM shift knob sitting on top. 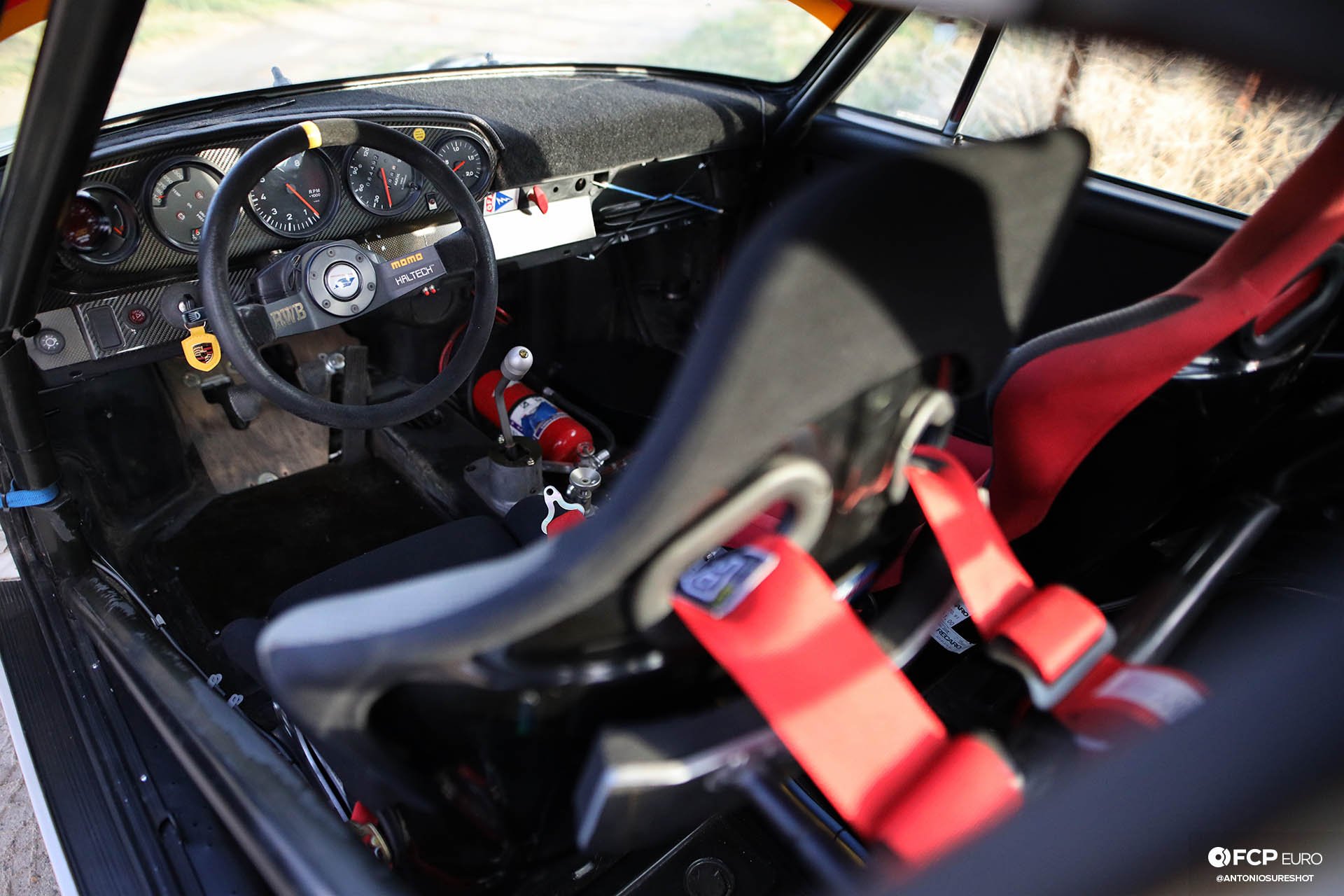 Behind a well-used suede Momo steering wheel sits a carbon fiber dash, which was a factory dealer option for the 993 Porsche. Duck rotated some of his VDO gauges so he could see them better at a glance from behind the steering wheel. 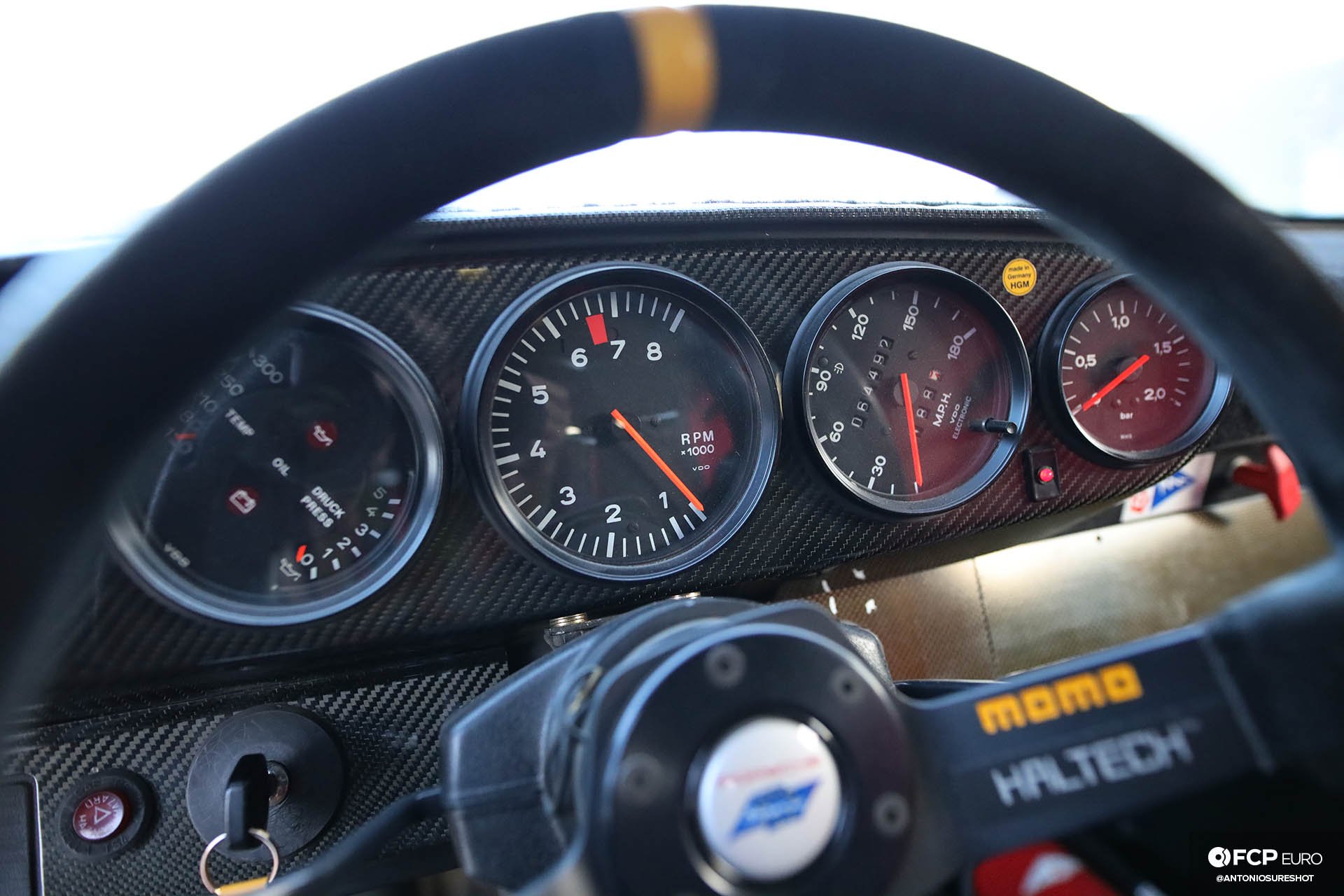 On the left side sits the oil temp and oil pressure gauge, and to the right are the boost gauge and speedometer, which is rotated so he can clearly see 65 mph, so he makes sure he's not going over the speed limit when driving the car on the street. When your 911 has this much power, it's effortless to go fast while cruising, and not realize you're doing 80 or 120 mph.

Right in the middle of the dash, the factory VDO tach has been modified by North Hollywood speedometer, so that the redline on the tach would be raised to reflect his engine's performance. However, now that Duck has a new motor in the car, he says he needs to send the tach back to get redone again. The redline is even higher now, with a max rpm of 8000 thanks to a new set of Crower rods and all-new valvetrain. 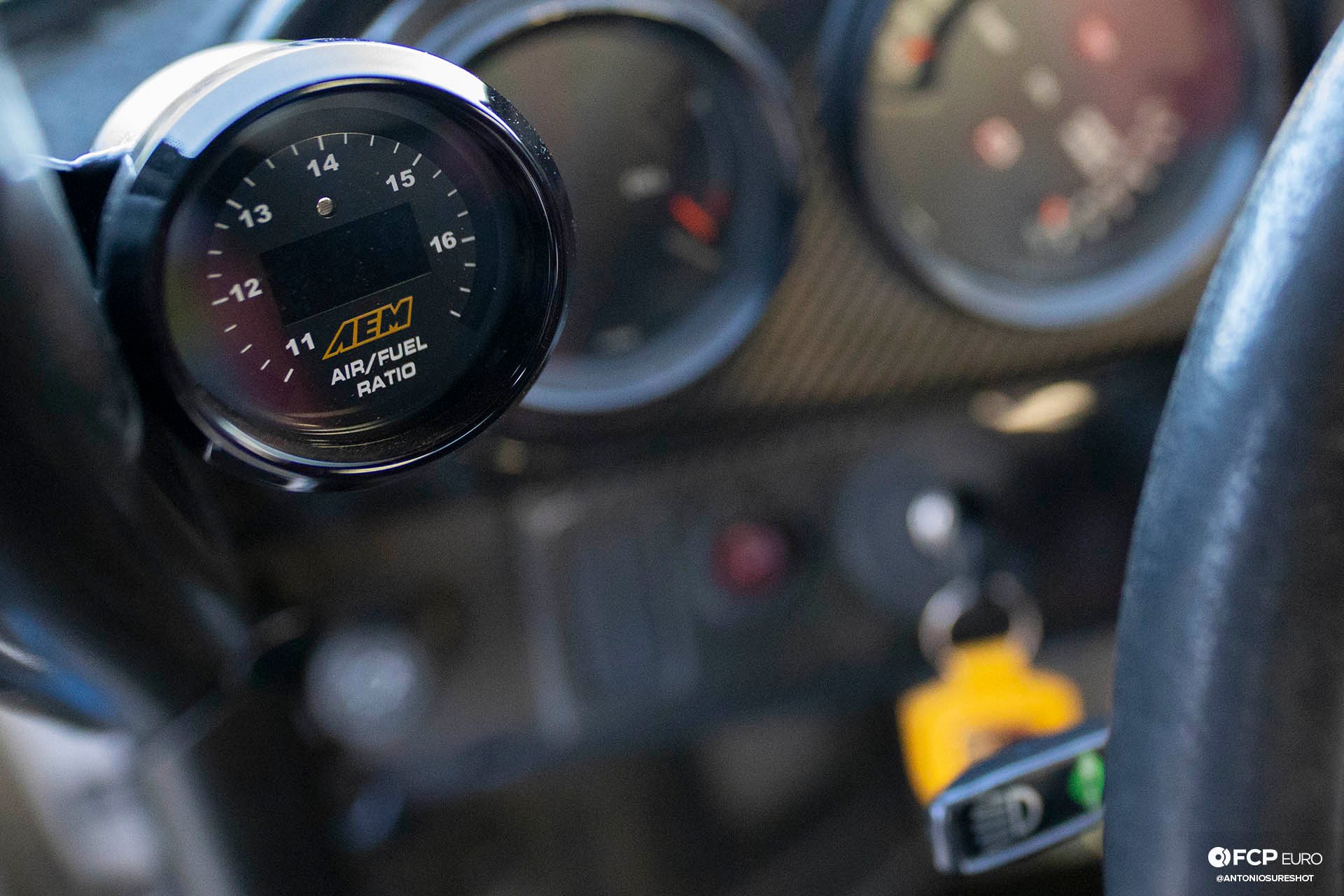 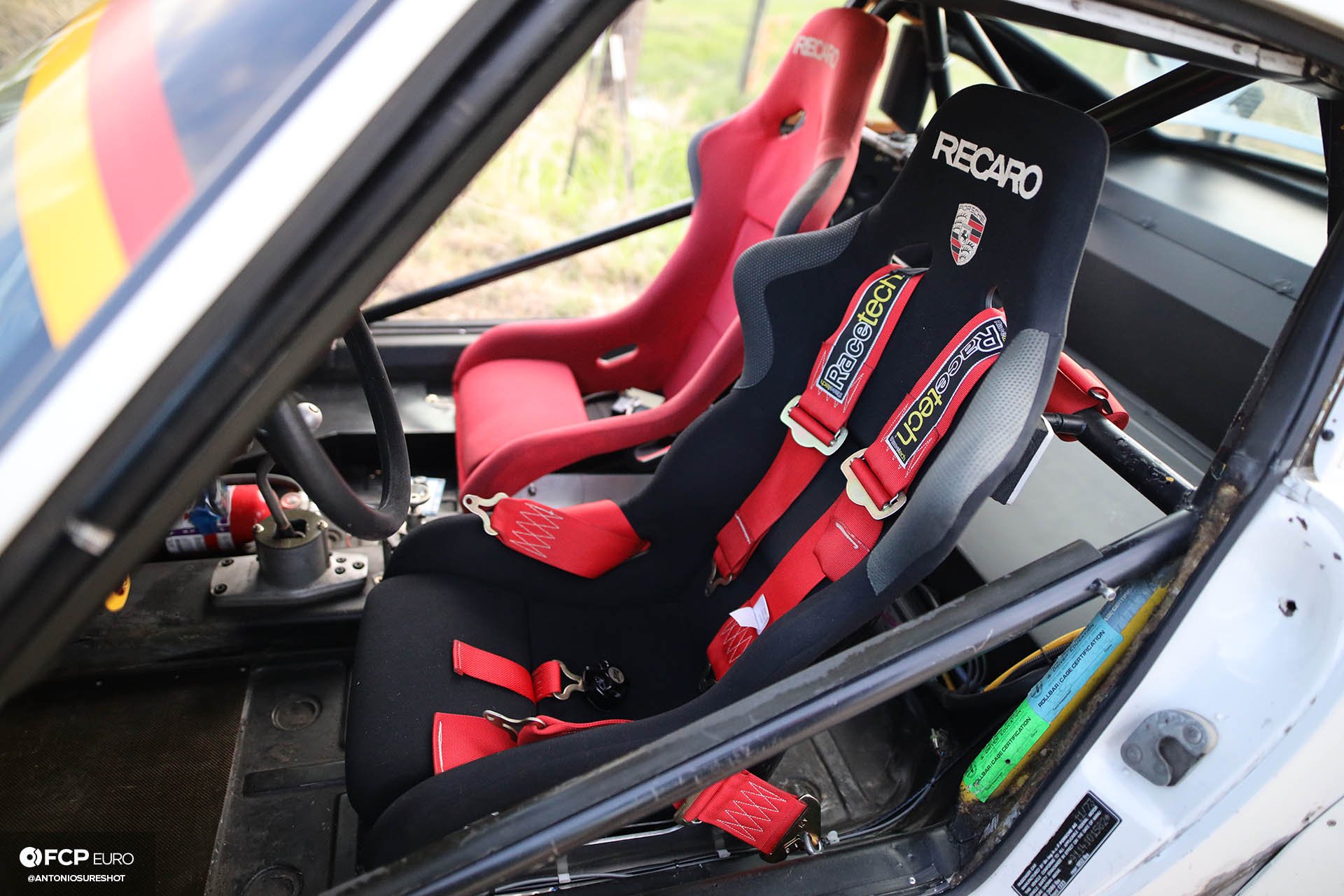 To keep himself firmly planted in the car, Duck installed a Recaro SPG bucket seat for the street. When he goes to the track, he swaps out the Recaro for a Racetech carbon kevlar race seat with head restraints. For further safety on the track, Duck welded up his rollcage with DOM tubing to comply with the SCCA and NASA rulebook. 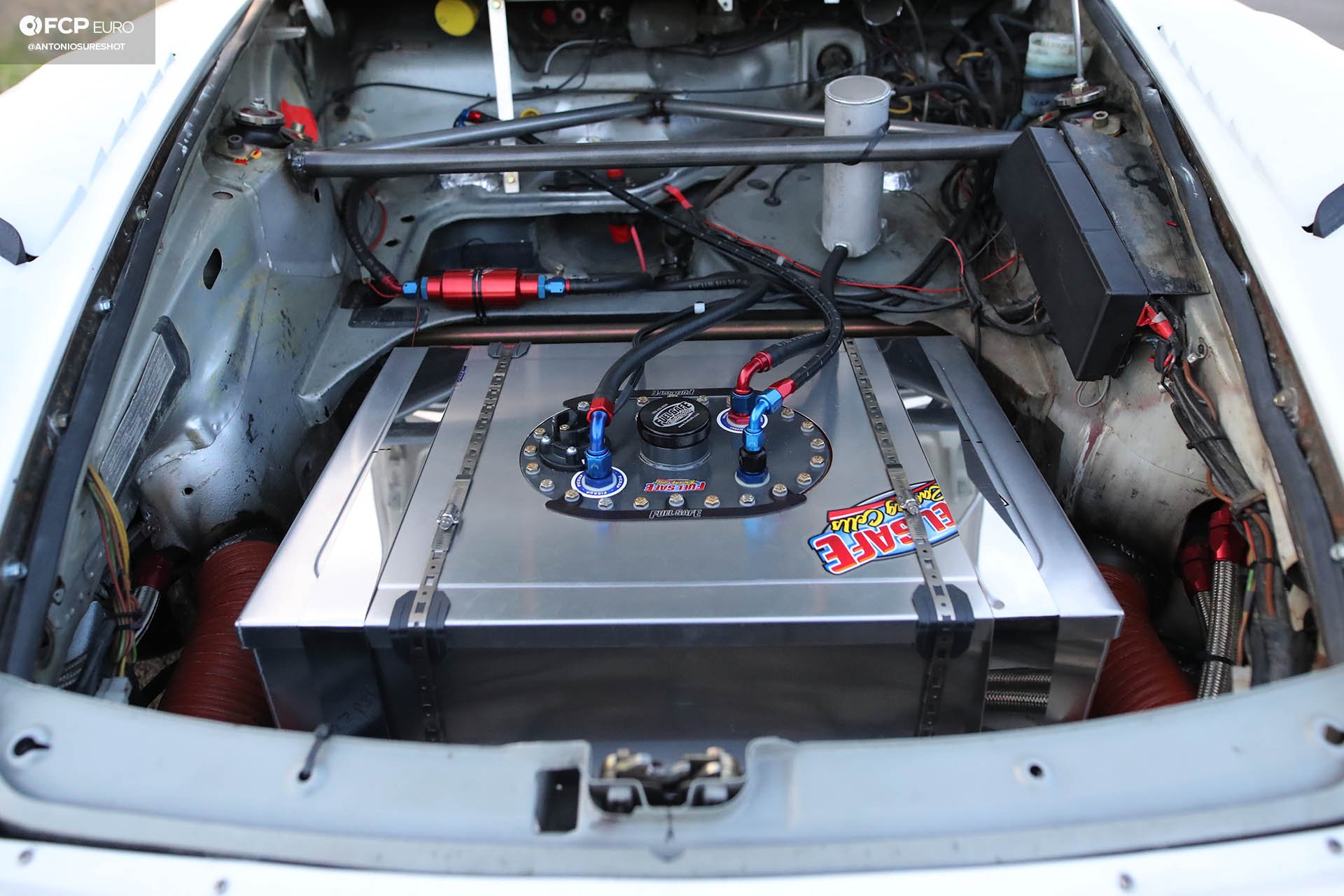 Up front, Duck improved the car by installing a Fuelsafe fuel cell with an Aeromotive external in-line fuel pump and a breather can. The old factory gas tank from Porsche is just spot welded stamped steel, and he wanted a more modern solution to his fueling needs. On both sides of the car, stainless steel braided lines with -12 AN fittings sit right up next to the inner fender aprons. These run to the dual oil coolers on both sides of the car. 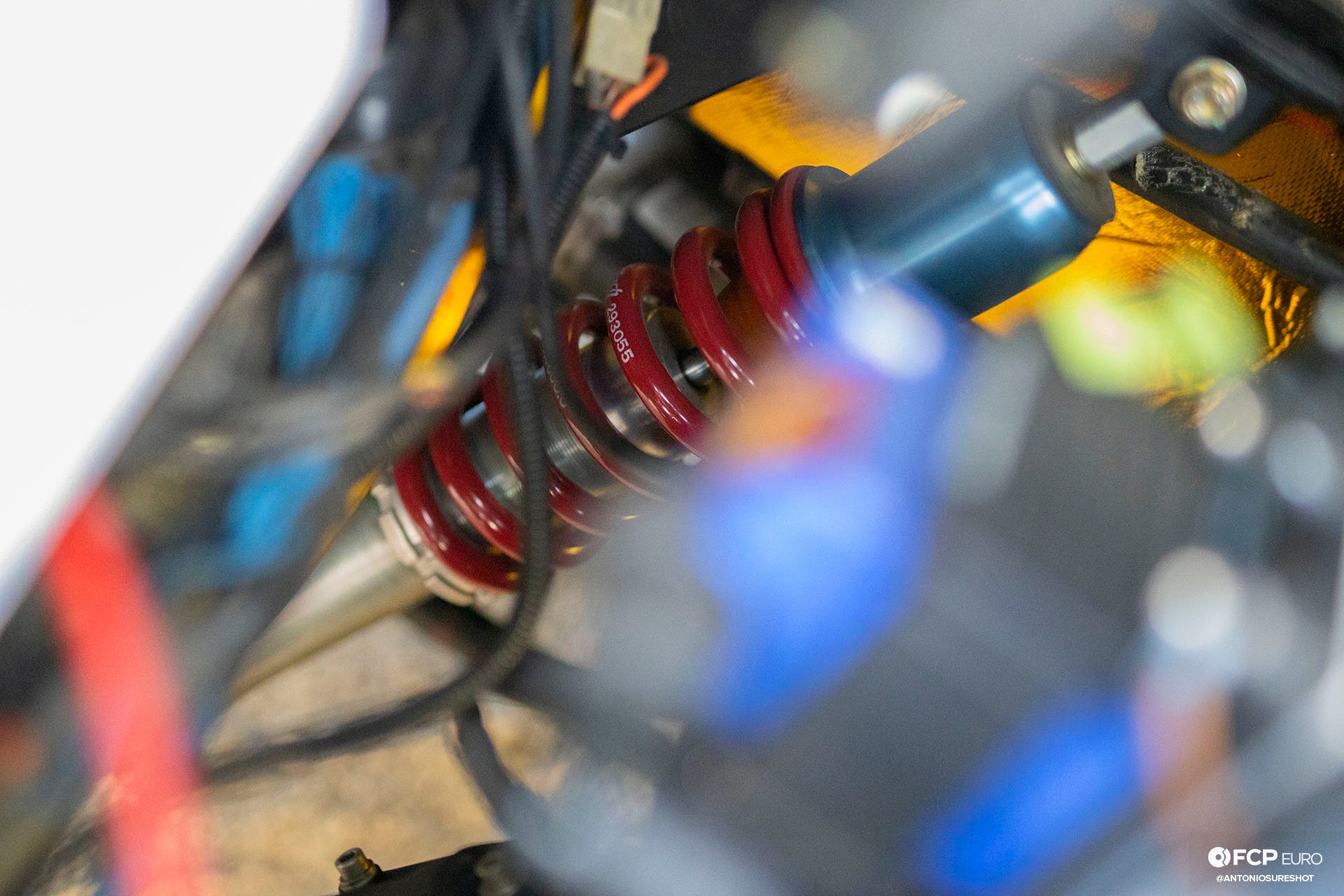 Keeping Tires on the Tarmac

Every car can benefit from improved traction and handling traits. With more than four times the horsepower than this 911 had started with, every bit of traction and handling that could be uncovered would be essential. Duck modified the suspension pick up points by nearly three inches before installing EBS Racing custom control arms and spring plates that he fabricated by himself. This corrects for bump steer and ensures that the suspension still has a full range of motion despite being lowered on Bilstein Racing Porsche 934 dampers and Eibach springs. This improved suspension absorbs the bumps and undulations in the road surface while keeping the rubber pressed firmly to the tarmac. 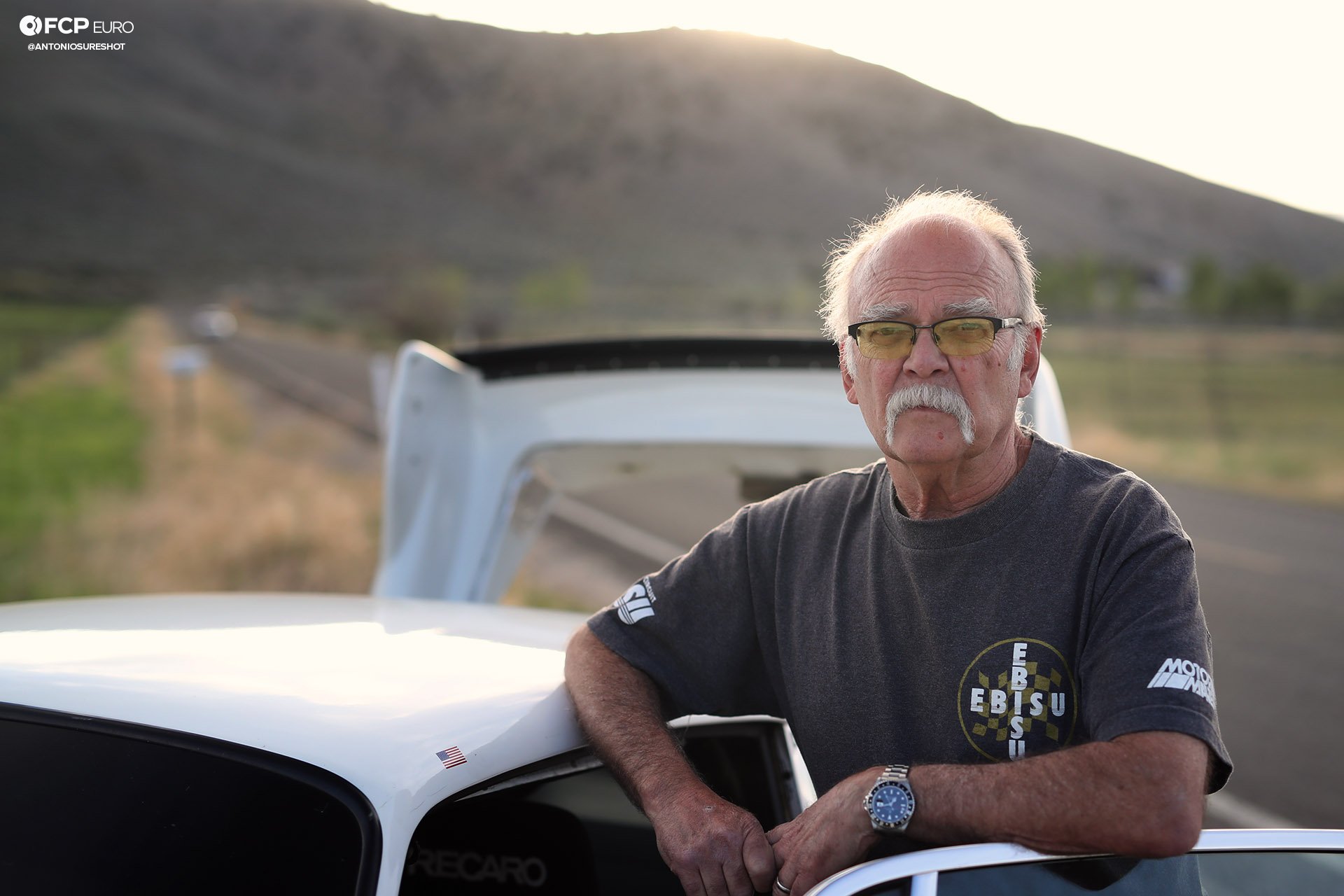 Proof on the Podium

So far, this 911 is clearly a competitor with the makings of a champion. But what accolades has this man and machine captured in the last three decades? With graciousness and a "to-the-point" demeanor, Duck commented, “At the first NASA event at Fernley Raceway, I took first-place in my very first race. At the last Virginia City Hill Climb, I was the first loser with a time of 3:15. Over the years, I’ve also managed a few first place finishes in the GT1 class at NASA and Porsche Club events.” He doesn’t claim to be a god on wheels, but he certainly has some driving talent to pilot this 911, and some victories to back it up. 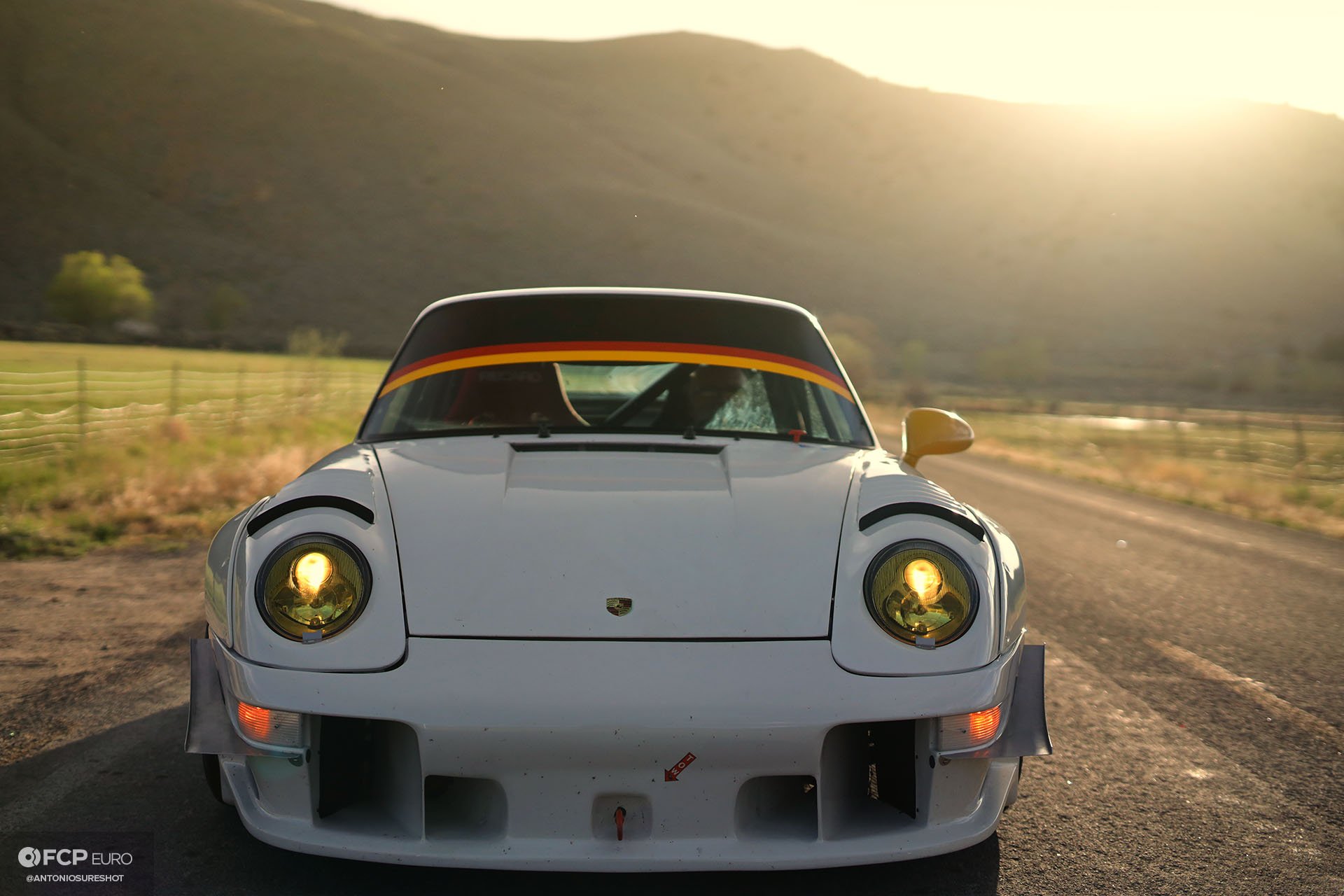 When asked if this 911’s 35-plus year evolution had reached its pinnacle, Duck replied as champions would, “This car will never really be finished. It’s always evolving, changing, and improving.” With a 70's body, a 1990's look, and millennium technology, this Porsche transcends generations and does not appear the slightest bit out of place. Always preparing for the next road race or hill climb, watch for this racer and his Porsche at a competitive venue. Just don’t expect to overtake him; it won’t be easy.

If you like this Porsche, you can find additional Porsche-related content at porsche.fcpeuro.com, as well as more build features like this one, here. If there's anything specific you would like to see, or if you have any questions/comments, leave them in the comments section below.