As an icon for the late air-cooled crowd, the Porsche 911 RSR was the car that racing enthusiasts associated with radical widebodies before all the Rauh-Welt Begriff (RWB) Porsches began popping up on the internet. Jay Jayasiri’s 1996 Porsche 911 Carrera streetcar is his own homage to that design.

It seems like every time you turn around, there’s another new Rauh-Welt widebody Porsche popping up somewhere. Don’t take that the wrong way⁠—we have a great appreciation for the time and dedication that Nakai-San from RWB takes with these builds.

Aerospace engineer and doctorate student Jay Jayasiri chose to go a different route with his own 1996 Porsche 911 Carrera, though. 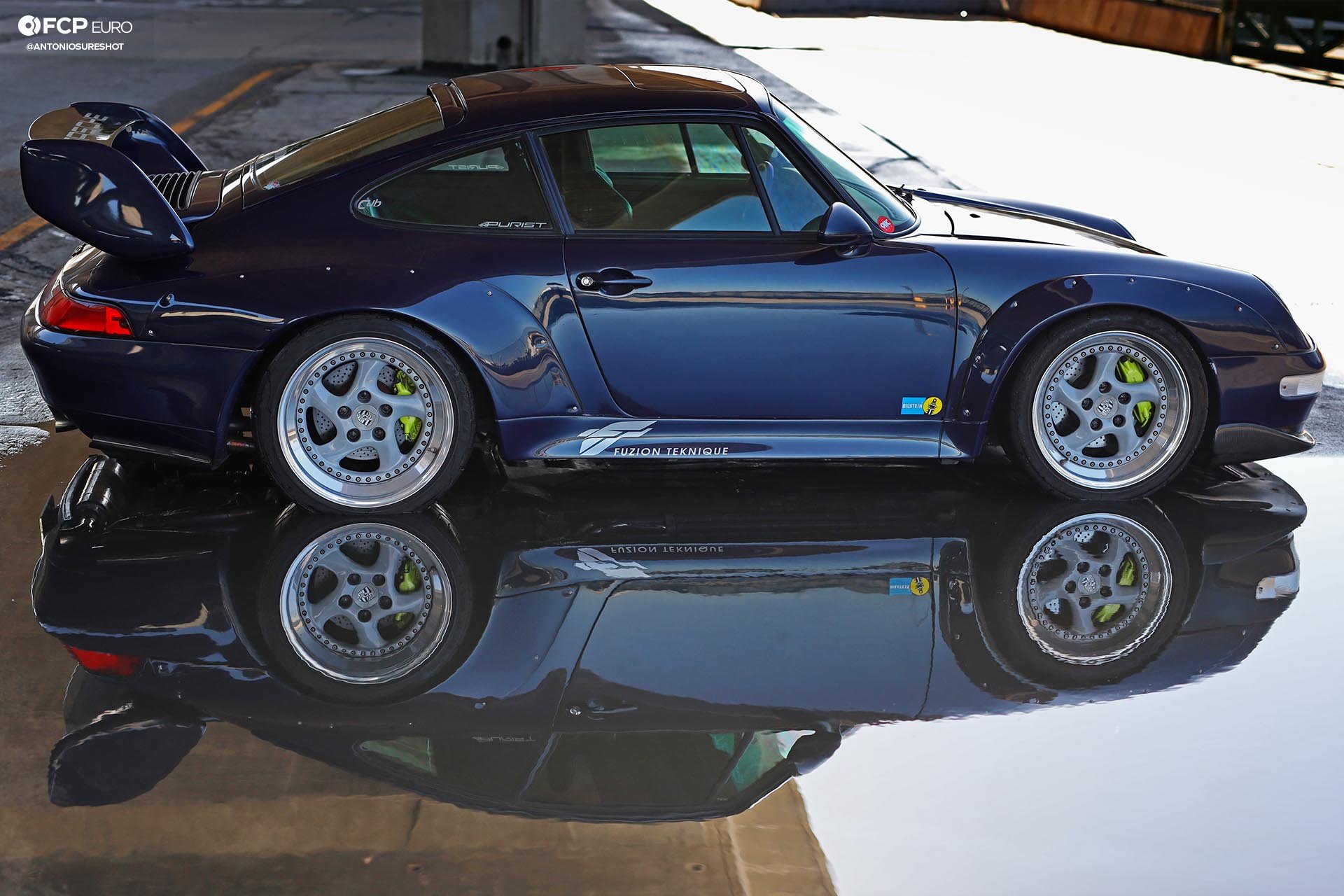 “The power needed to justify the kit and the whole RWB driving experience with the massive amount of bump steer was not for me,” Jayasiri explained. The bump steer issue comes whenever the tie-rods arc changes from the arc of the front lower control arms. When you lift or lower a vehicle, you change the normal travel arc of both the control arms and tie rods. You can see this as the tie rods will be at a different angle compared to the control arms at rest. In the case of an over-lowered Porsche without a bump steer kit and it's behind the centerline of the axle location, bump (the up travel) will force the wheel to toe-in while droop (the down travel) will force the wheel to toe-out.

This is because as the control arm moves up, the tie rod effectively shortens and lengthens during travel. This pushes and pulls on the wheel carrier, as mentioned above. The solution to fix this is to either change to an RS wheel carrier since the RS is lower than a standard 911 or, if that doesn’t fix it or you really slam it down, use a bump steer correction kit that usually consists of a set of adjustable outer tie rods. These allow you to lower the inner tie rod to match the resting angle of your control arms by using a longer stud, a toe arm sleeve, and spacers to position the outer tie rod to level the inner tie rod to the control arm.

Jay uses a set of Rennline front tie rods with bump steer correctable outer links. It uses the method mentioned above with spacers to move the outer rod up and down to level the inner rod. He also matches that with a set of Carrera RS wheel carriers. 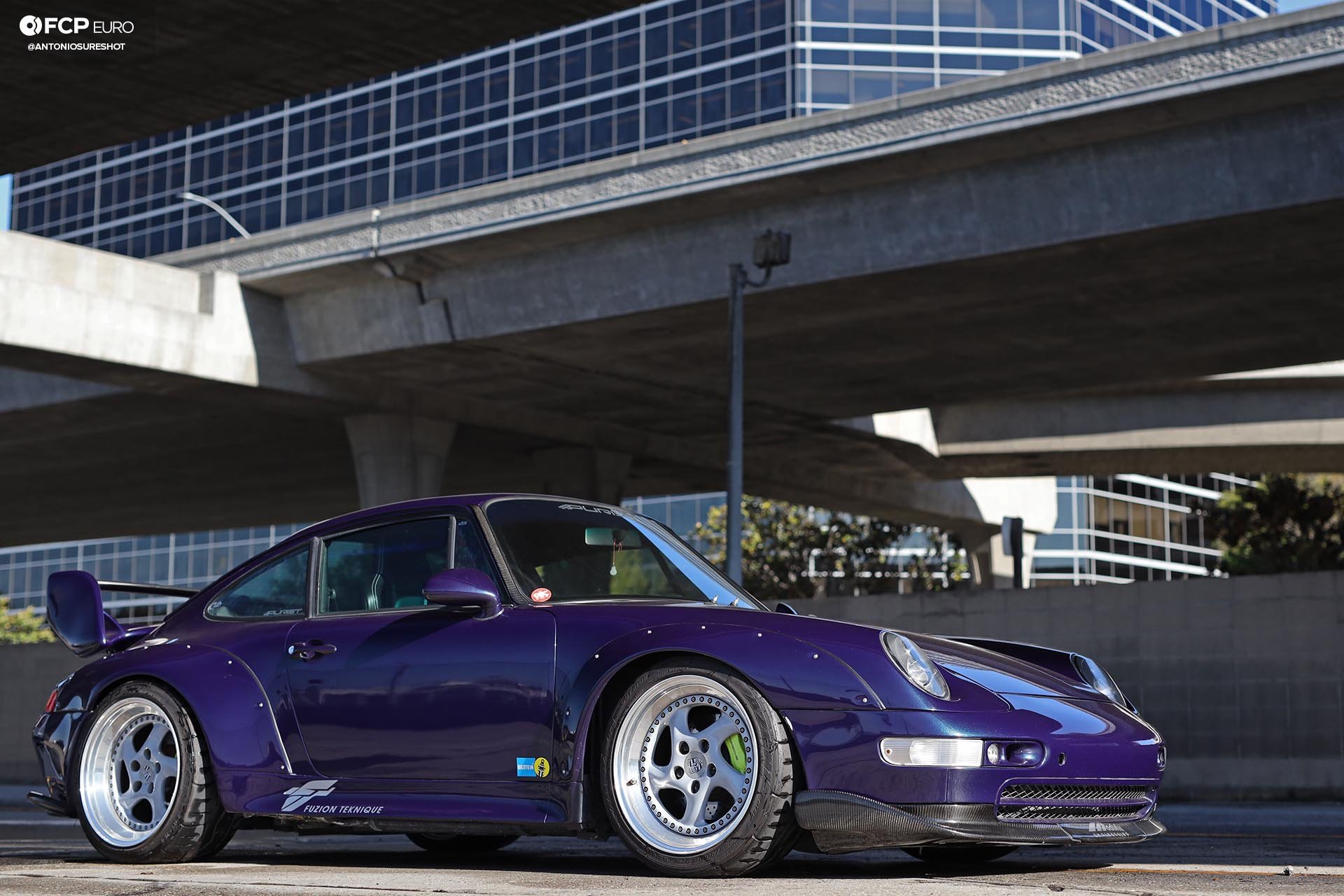 So, instead of that RWB inspiration, he looked to what Porsche already did, which was the RSR. What is an RSR, though? If you’re not a Porschephile, you’re probably confused and can’t find anything on a Porsche 911 RSR except for race cars. That’s because the RSRs are the customer race car versions of their homologation models. 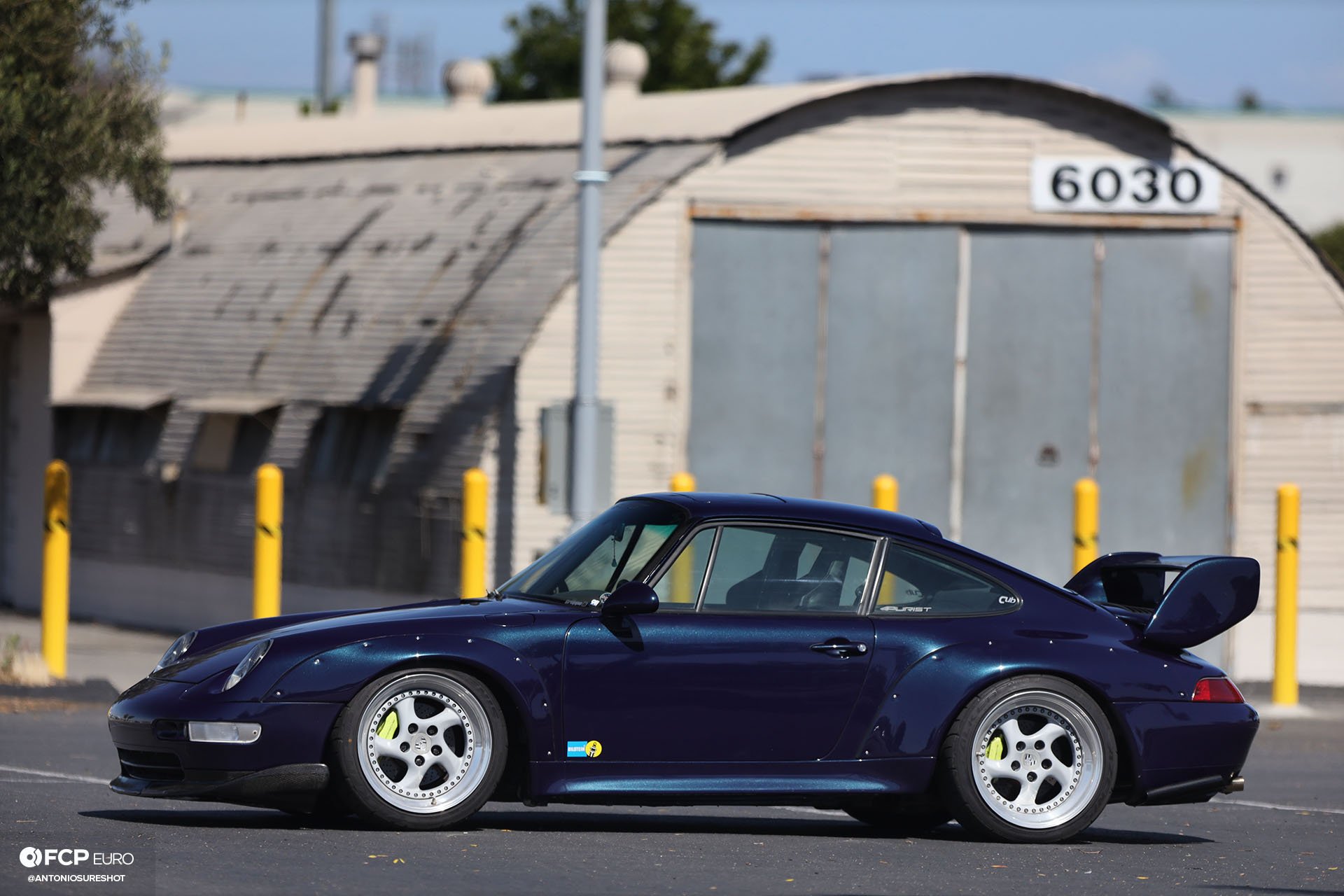 The RSRs were built for racing only and were intended for that purpose going all the way back to the original RSR, the 1973 Carrera RSR for FIA Group 4 racing of that era. Because of their high-horsepower, racing roots, these Porsches have always been the widest cars from the Stuttgart builders. Every RSR was also a Porsche customer race car save for the GT1 (Yes, the crazy mid-engine version) and GT2 Porsches during the 993 era. Officially, at least according to Porsche’s history, the RSR wouldn’t return until the 996 era and remained for customer cars until the 991 model, where Porsche adopted the name for all their race cars, not just customer cars, and continue to do so to this day.

Unlike RSR versions, there were road-going versions of GT2s built. This was done to meet the homologation requirement for FIA GT2 events including the 24 Hours of Le Mans. The Porsche 993 911 GT was the first one and was essentially a rear-wheel-drive version of the 993 Turbo with fender extensions for wider front and rear tires. However, from 1996 to 1998, there were 45 993 Cup cars with the naturally aspirated 3.8-liter that were designated RSR. These were solely made to compete in a few racing series around the world that didn’t follow the FIA GT2 requirements on homologation. 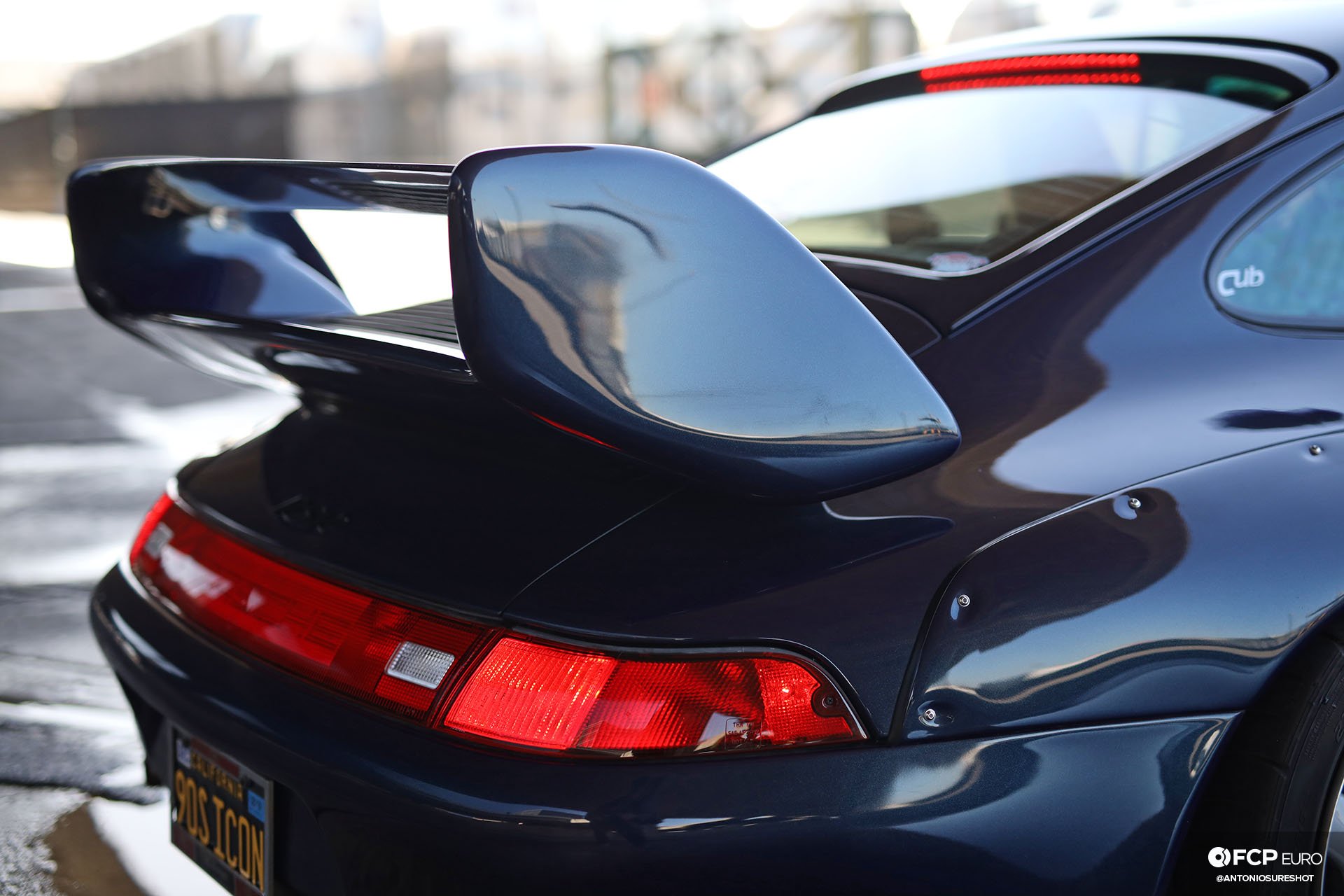 They also depart from RSR tradition by not being the widest 911 Porsche offered. These cars featured narrowbodies with GT2 fender flares as well as rocker panels and the Carrera RS Clubsport wing.

Some people probably don’t realize that a normal 993 911 Carrera and a 993 911 Turbo are different width bodies, too. The rear wheel arches are 60mm (2 3/4-inches) wider on the Turbo than the Carrera (standard) body. The GT2s were wider than the turbo, front and rear and used exposed bolt fender flares until the GT2 Evo in which the front flares are smooth. 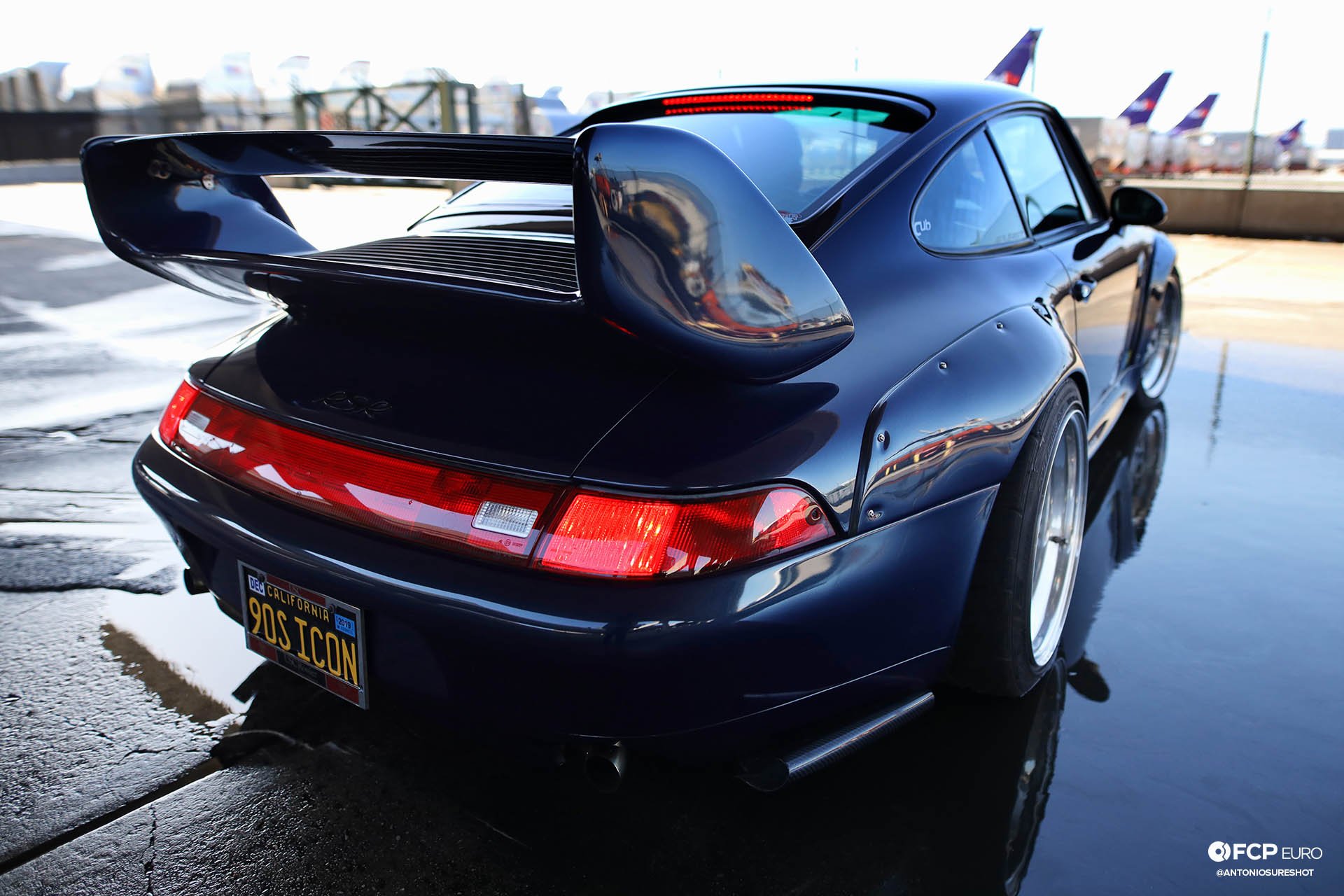 Unlike the GT or GT2, there wasn't a road legal version of that RSR. Not only are these race cars some of the rarest of the 993 family, but they are also considered the final evolution of the air-cooled, naturally aspirated Porsche 911. However, its that narrow body with GT2 flares that makes this such a wild looking car and one many road legal Carrera owners try to replicate.

To match the look of that very rare 993 RSR, Jay used these Getty Design GT2 fender flares. They add 50mm (2-inches) to the rear quarters and 38mm (1 1/2-inches) over the Turbo body, so the gain is more modest on the narrower Carrera. However, this matches the RSR and makes for a factory look over the RWB fenders. 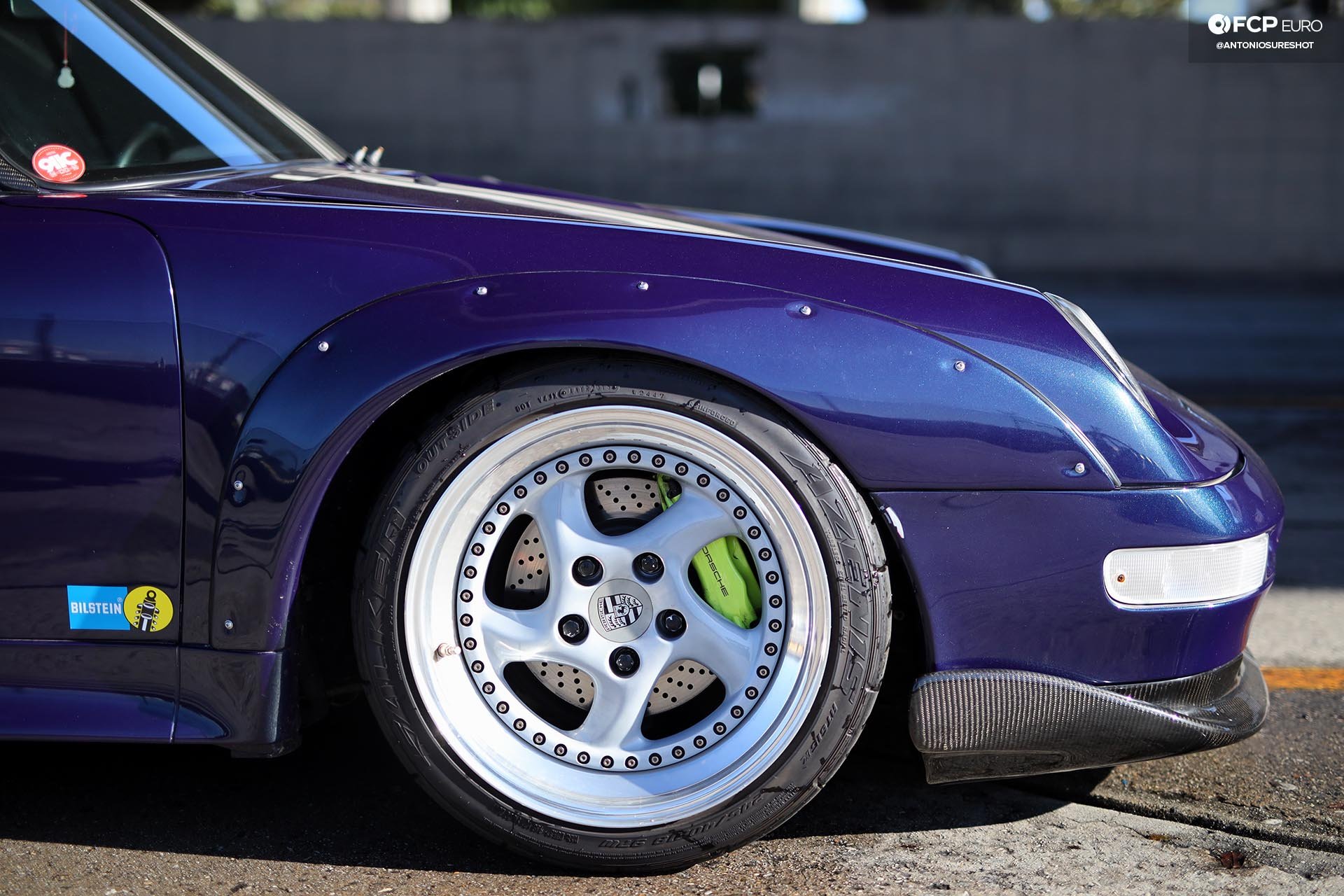 Even with these flares, Jay needed to cut away the factory sheet metal to fit the Harmann 18x9.5 and 18x11.5 wheels. These are fitted with a set of Falken Azenis RT615K tires in 265/35R18 front and 315/30R18 rear. Under those Harmanns are Porsche OEM calipers but painted in Krypton Green Pearl with Yellow flakes. The brake lines have been changed to stainless steel braided versions to reduce the compliance that rubber versions have under brake pressure while Stoptech Brake Pads help reduce the distance to get to a stop. 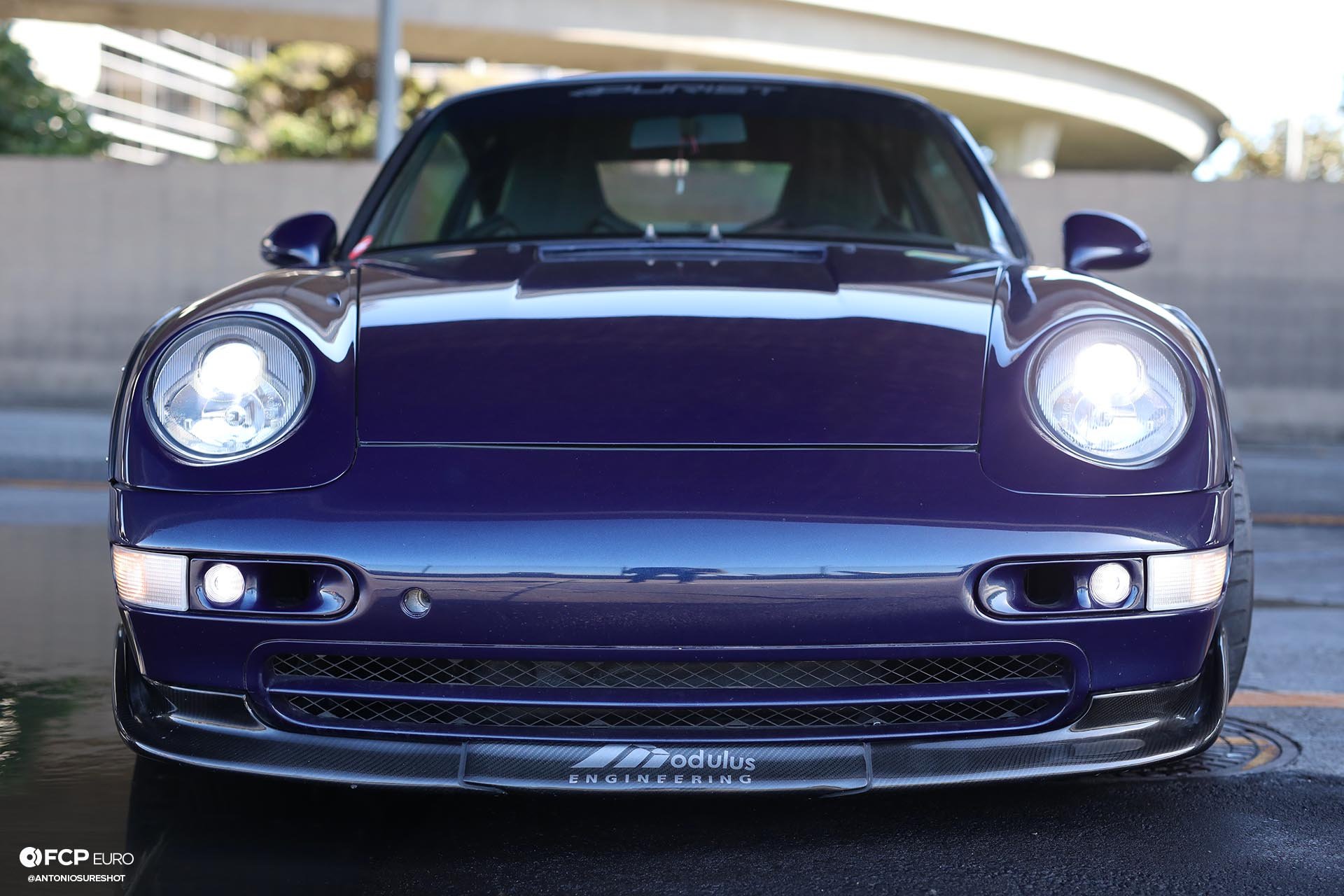 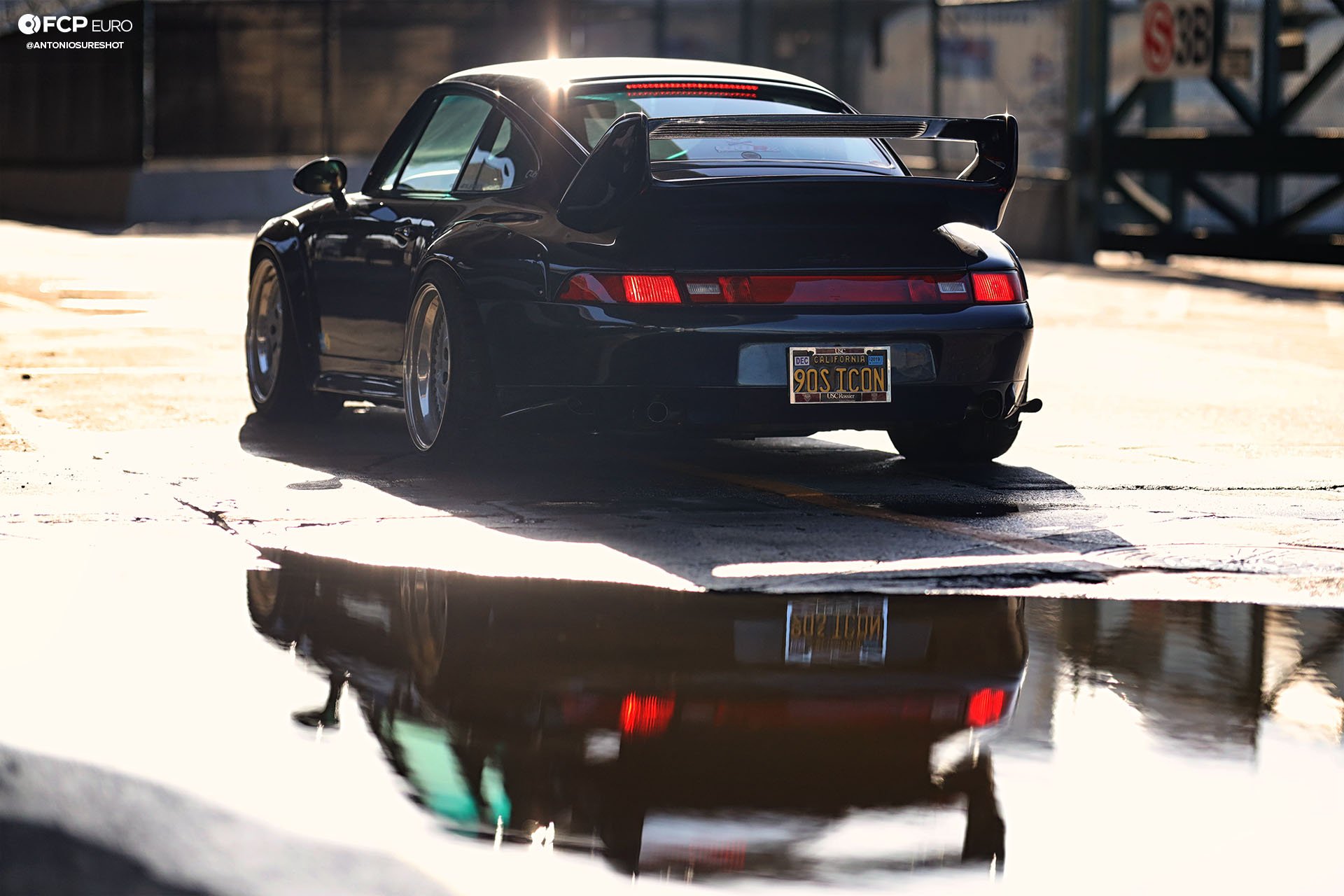 In the back, the bumperettes are gone as well. That wing is an OEM Turnwald Carrera RS Clubsport wing, which is noted for having functional turbo inlets in the wing struts and like what was used on the 993 911 GT. 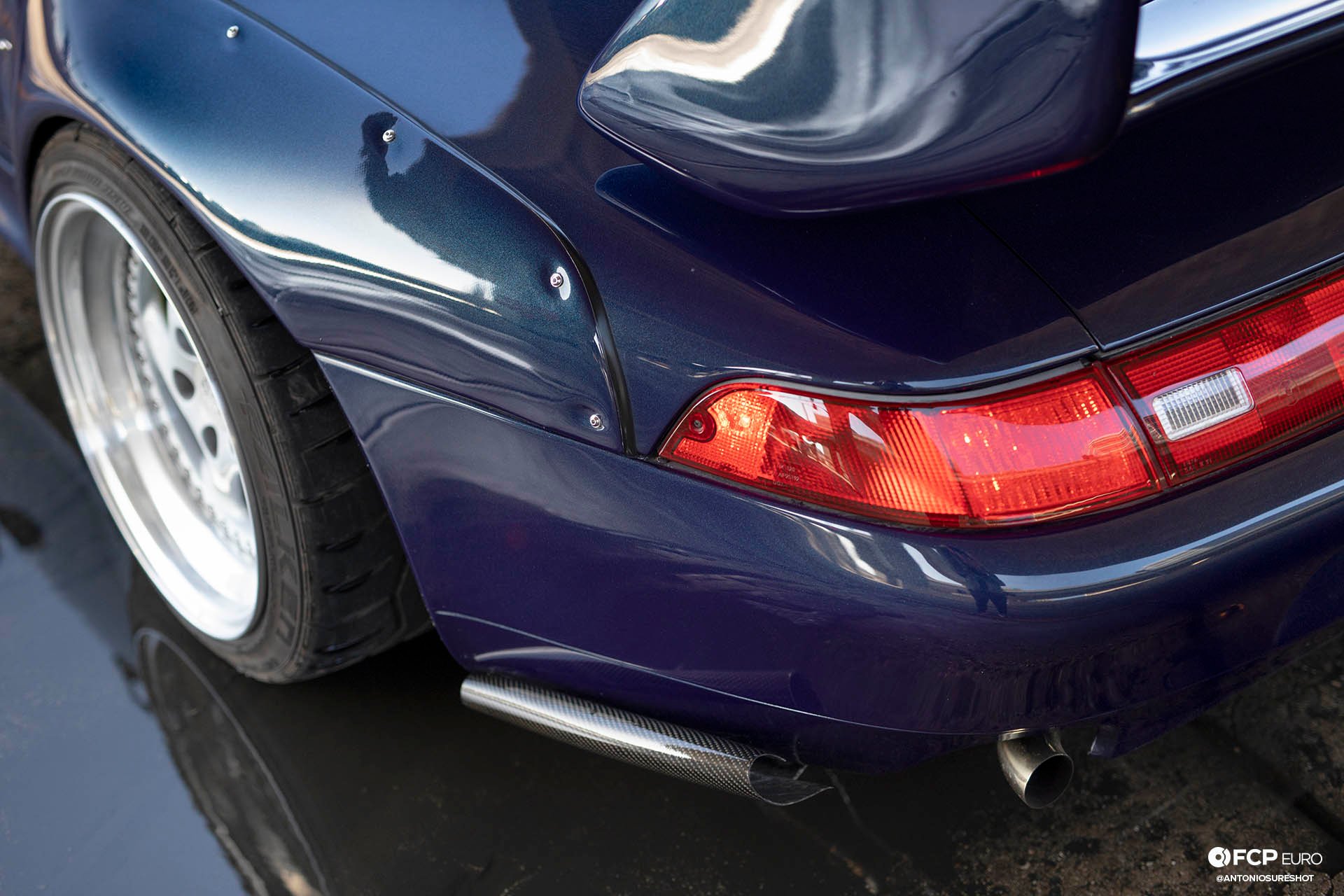 If those carbon fiber rear bumper extensions look strangely familiar, that’s because they are modeled after the RE Amemiya rear diffusion spats from an FD3S Mazda RX7. The entire car is painted in a dark blue metallic, which wasn’t far off the original color of Jay’s 993. 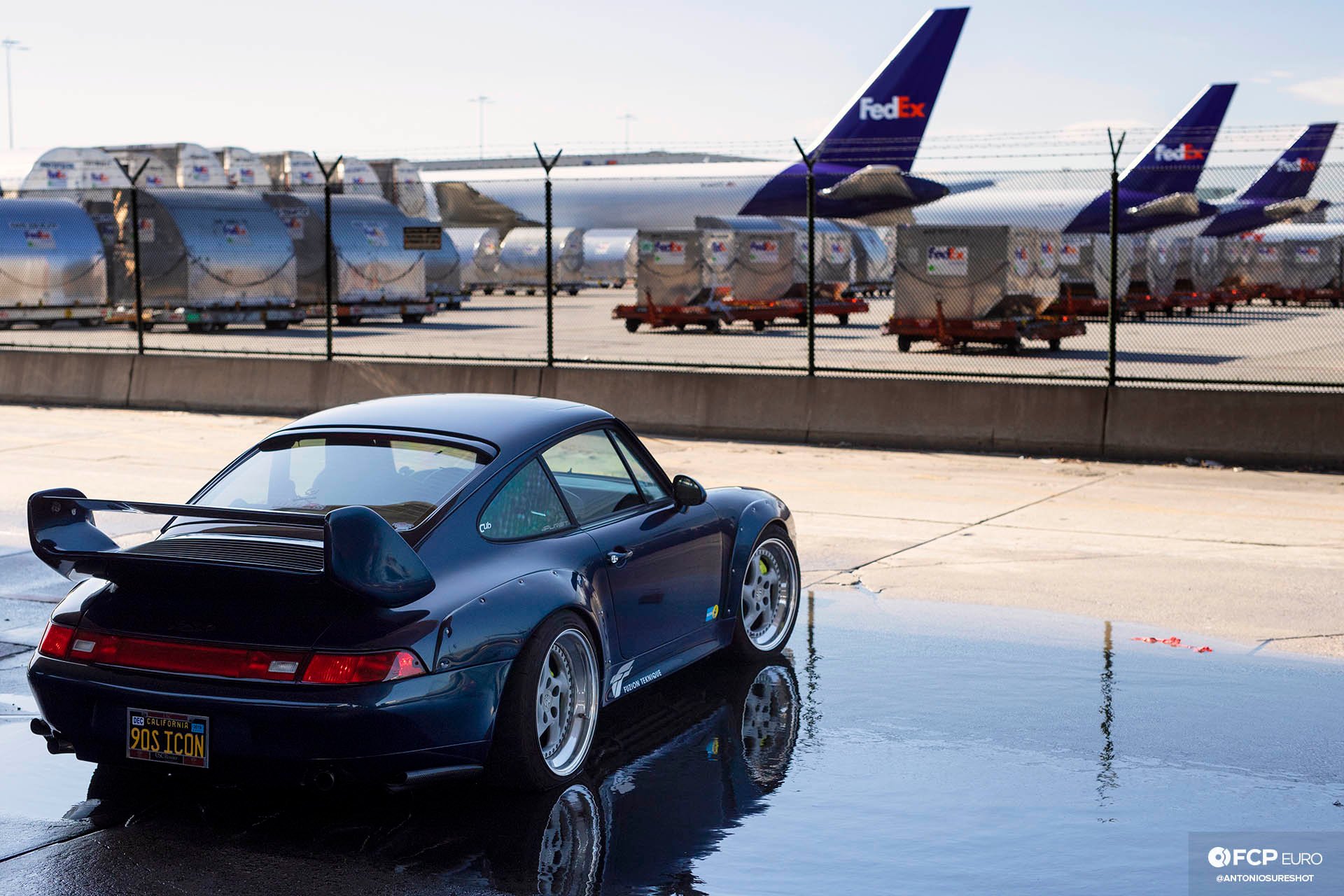 Of course, if you’re going to look like a modern RSR, then you need to handle like one, too and Jayasiri is no stranger to the track. To get the stance and proper damping, a set of Bilstein PSS10 Coilovers are used on all four corners. The rear features a set of Rennline Droplinks attached to the H&R Rear Anti-Roll Bar. It also uses a set of Rennline toe arms to keep the rear tires pointed in the right direction at his ride height.

The front uses an OEM Porsche anti-roll bar from the M030 sport chassis, which was only used on the Carrera S and Carrera 4S. This bar is thicker than the standard Carrera, so it offers more roll resistance over it. Walrod poly bushings and Polyurethane transmission mount reduce the compliance of rubber bushings without the harshness of solid metal versions. 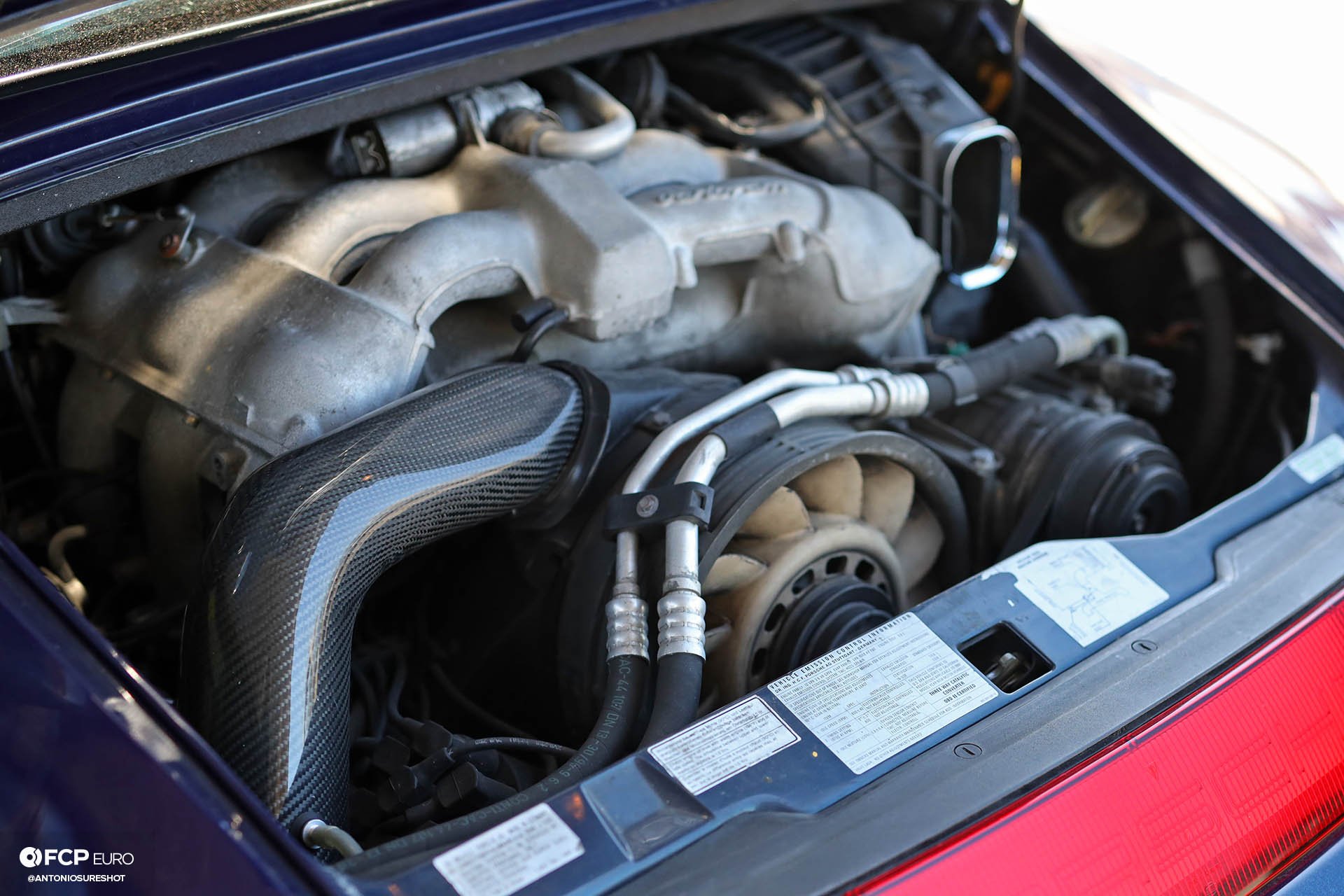 The engine is currently stock internally, but it uses a Fabspeed RSR Exhaust to get that awesome exhaust note, and a Porsche Motorsound airbox gives you a louder intake noise when you step on the accelerator pedal. A set of Porsche Carrera Clubsport RS engine mounts keep the flat-six from rocking about while a Clubsport RS clutch and flywheel send power to the transaxle. The Modulus Engineering Carbon Fiber heater delete kit removes the heater piping that leads to the interior. 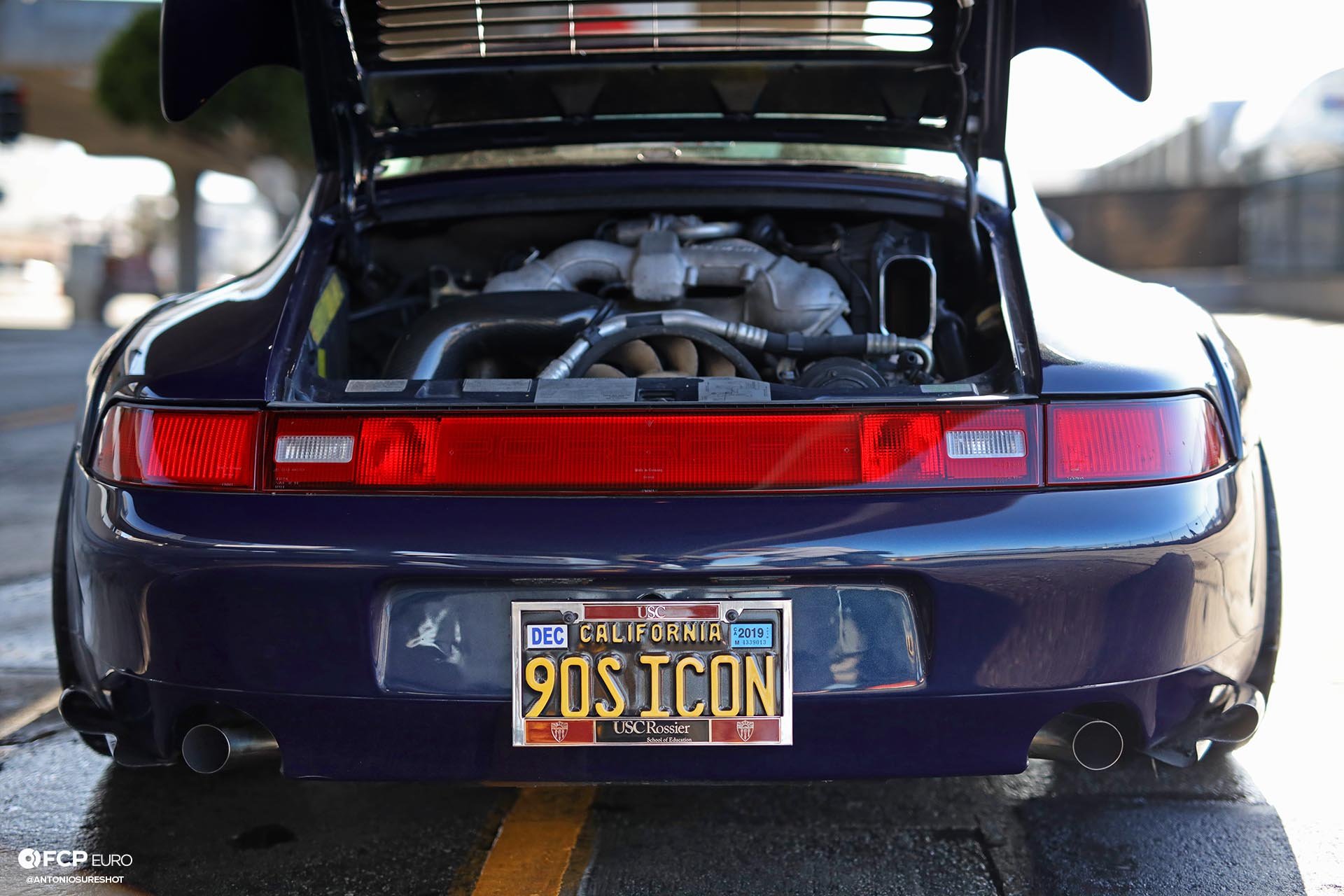 Remember, this is an air-cooled engine, and there is no water to use in a heater core. Engine heat captured from the heads and sent down pipes made into the frame. Another problem of being air cooled is that heat and age can eventually lead to the insulation pad falling into the engine. A 911 pad keeper prevents that from happening and really cleans up the look of the Porsche engine bay. Eventually, Jay will install a TPC Supercharger and intercooler to add about one-hundred extra horsepower. While this gets away from what the original RSR was, you can’t argue with more power. 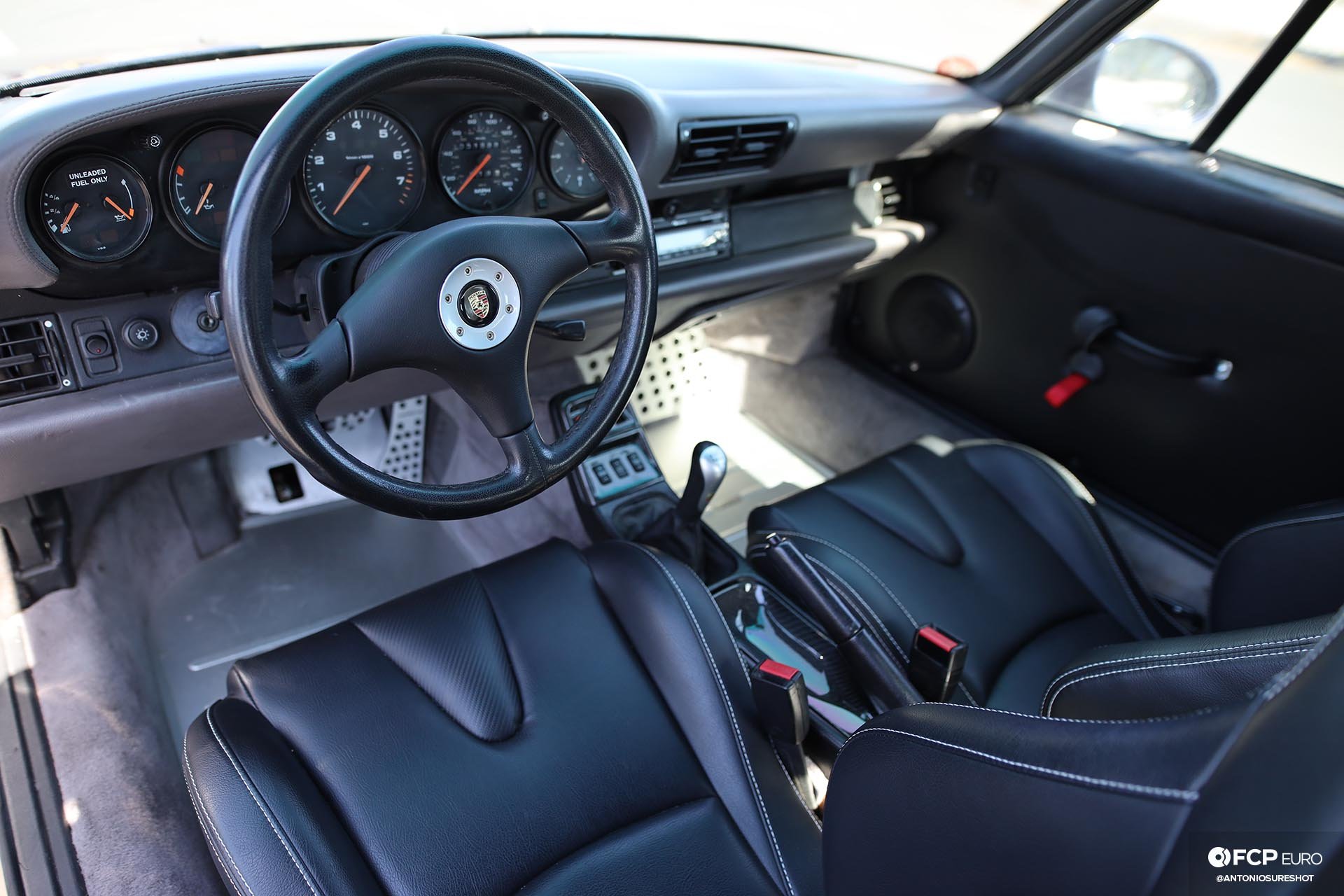 Inside, Jay’s RSR tribute is close to what you’d potentially see in a road going RSR. Well, if Porsche had built one, anyway. A pair of reclining bucket seats give comfort on long drives but still offer some driver and passenger retention. The RS Clubsport door panels, shift knob, and steering wheel gives a factory race car touch. 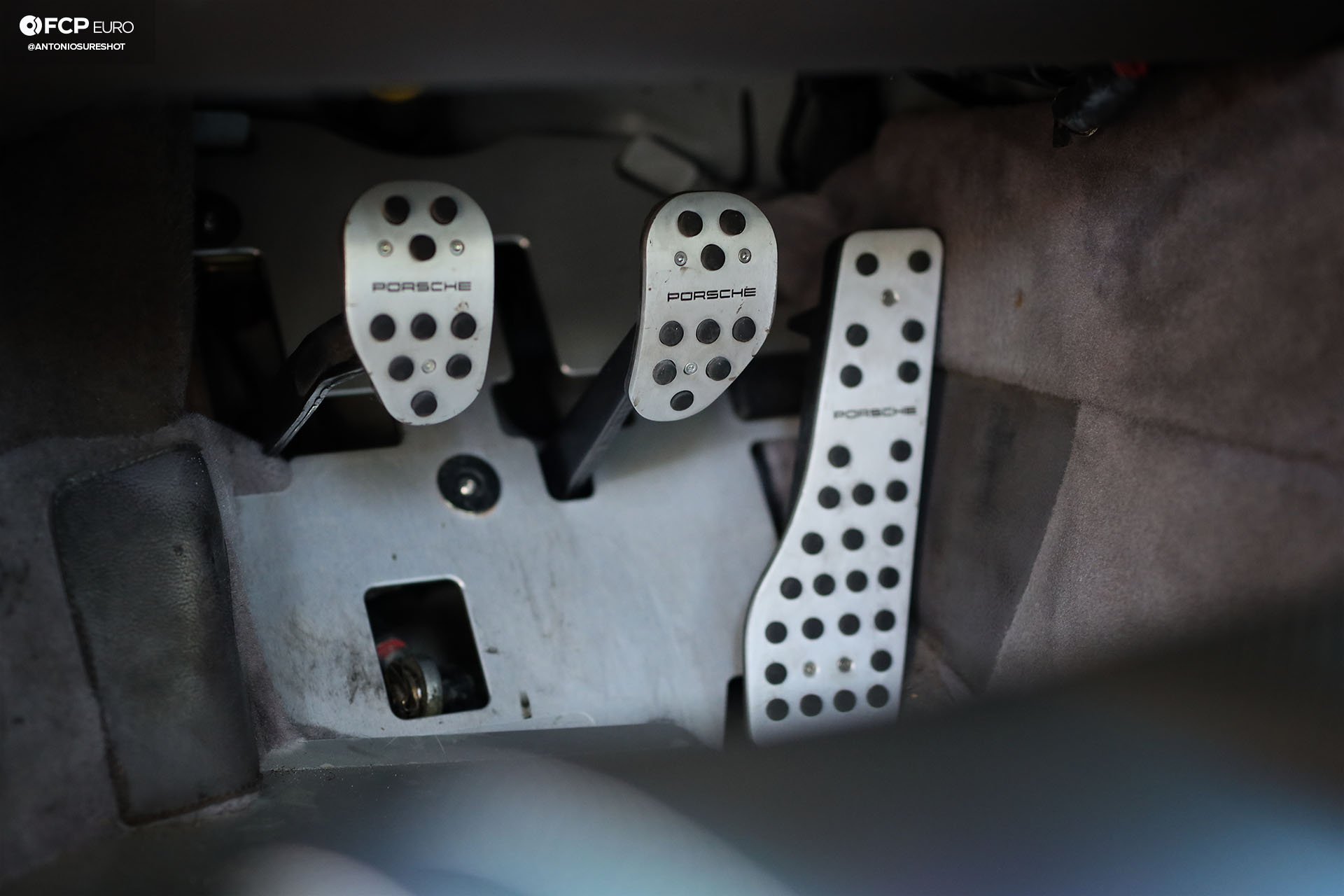 A set of floormats, kickpanels, scuff plates, and pedals from Rennline give the interior some additional race car flavor. The rear seat was removed and will help prepare the car for the DAS rollbar he’s going to install soon along with a brand new OE Porsche black carpet set. 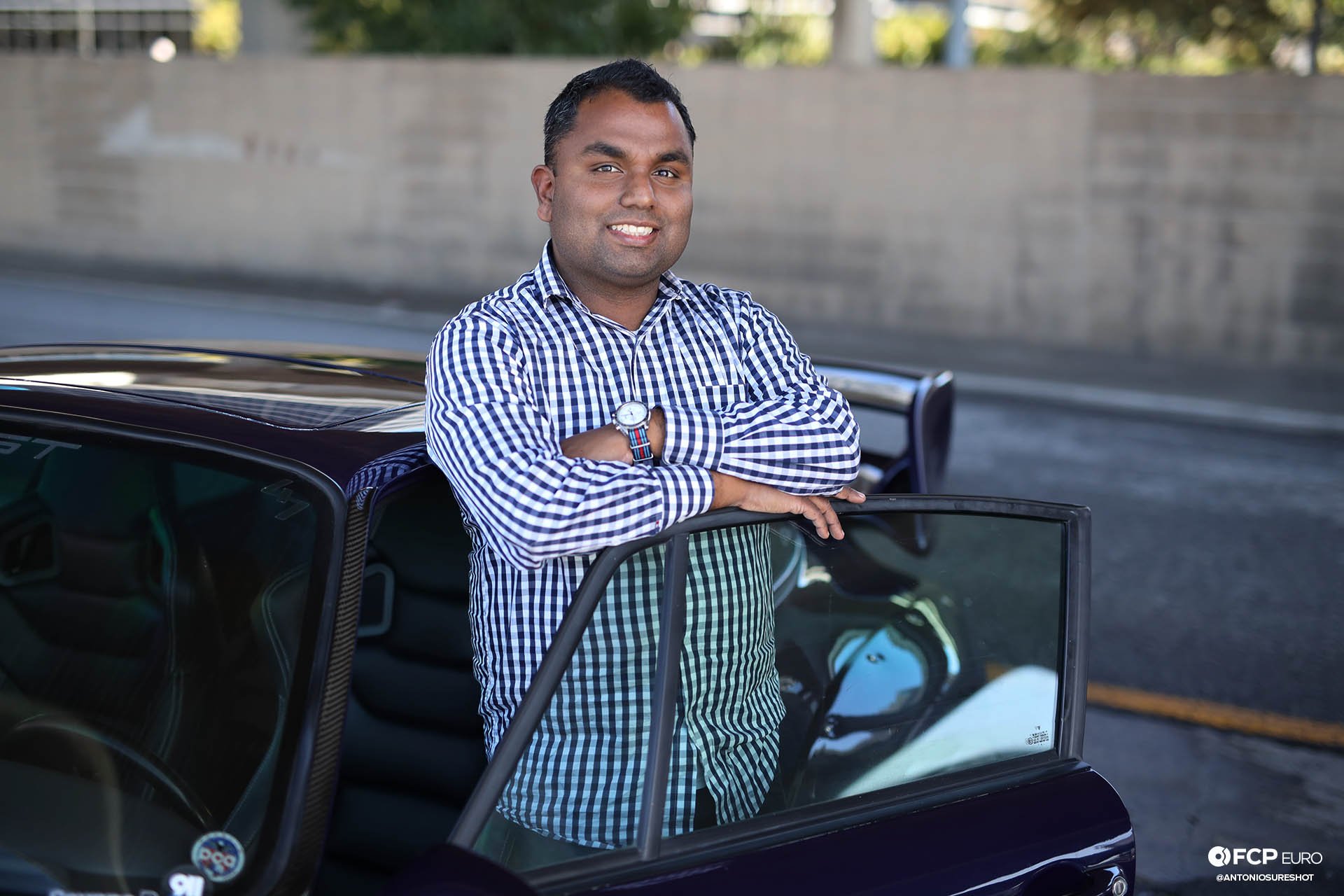 What started as a dream as a young boy that turned into a college graduation present to himself, Jay Jayasiri’s 993 is getting closer to the resto-mod desire he wanted. It’s no RWB or Sunburst Japan creation, but it is one with Porsche OEM dignity and a bit of rare history behind the design. No matter what, this 1996 Porsche 911 Carrera is shaping up to be something people will desire even as he continues to drive it.

If you like this 993, you can find additional Porsche content at porsche.fcpeuro.com, as well as more build features like this one, here. If there's anything specific you would like to see, or if you have any questions/comments, leave them in the comments section below. 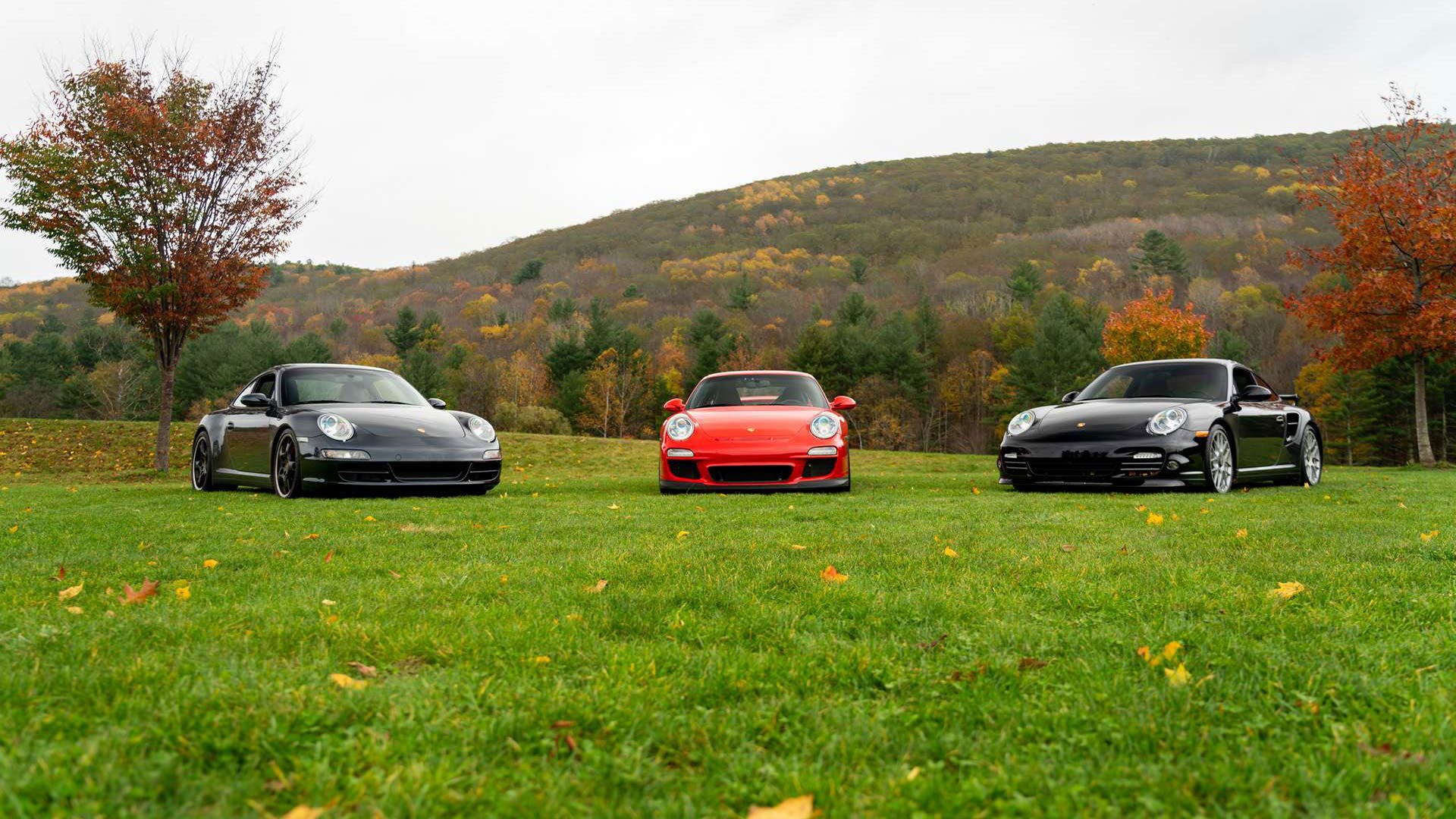