Our April AER race at Watkins Glen was cut short when the engine went "boom" and stopped running at about 100 mph through the esses.  Many hours of "what the hell happened" later, we discovered that one of the rod bearings had failed, causing the rod to overheat and eventually snap in half.  We have spent days diagnosing, searching for a new donor, and I recently spent about 36 hours over Memorial Day weekend building our new M20B27.

During that period, one has plenty of time to reflect on what went wrong and how it could have been prevented.  For the parents out there, would you agree having a car that is broken is akin to having a child that is sick? It's always on your mind and you can't stop thinking about it until they are better.

In my case, I know that a common failure in M20's is a rod bearing failure from oil starvation which can occur in high-G left hand turns when the oil runs away from the oil pump for a few seconds.   Before the Watkins Glen race, in anticipation of running a season with AER, I installed a Crank Scraper from Yother Motorsport.  It is supposed to maintain oil pressure, keep the oil from creeping up the right side of the block in left-handers, and may gain a few HP by freeing up the crank a bit from sloshing oil.  Well, it did it's part!  Oil pressure stayed above 50 psi in all turns.

The quality of oil is important for proper lubrication as well.  Redline Oil has a fantastic reputation in the racing community, so we decided to run 20w-50 in the engine and used MTL in the transmission and rear diff.  If it can withstand the rigors of racing, think of how well it would do in your daily! 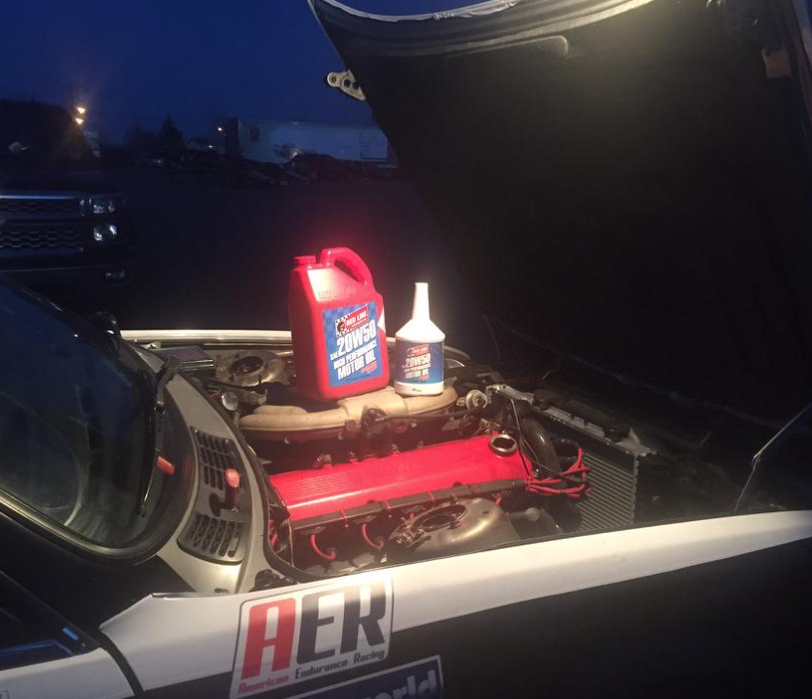 After reading this post, I also ordered a few Blackstone Labs oil sample kits so I could take a sample after the first race, and we did just that.  Here is the report - 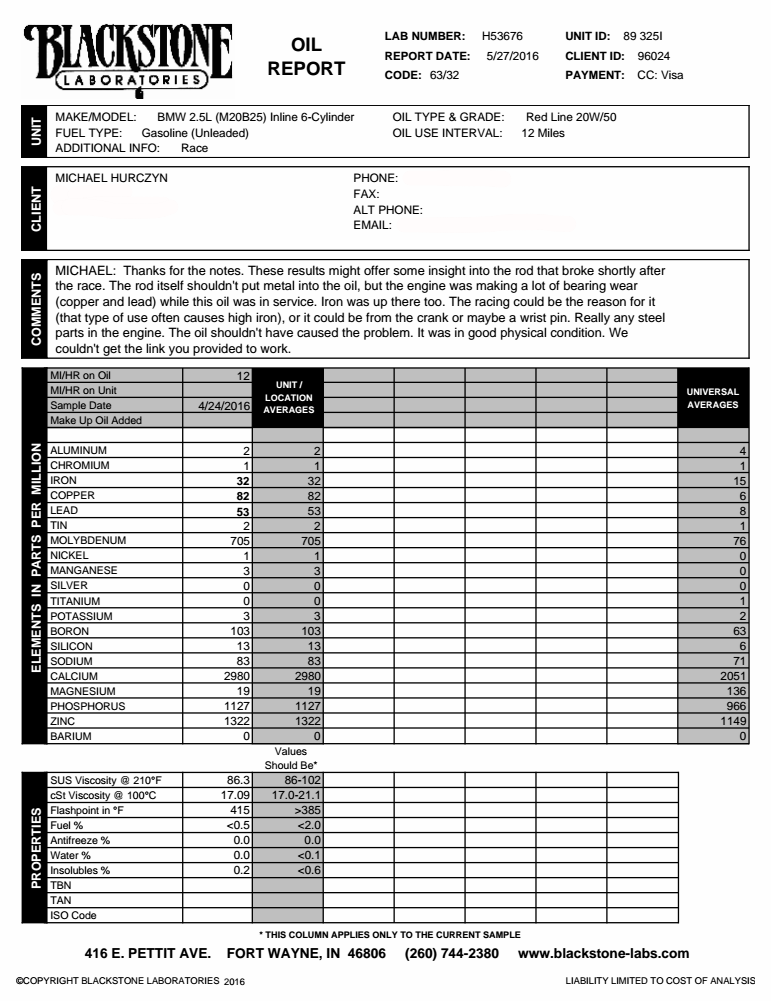 What I was hoping to write about was that the oil analysis came back and the oil was in such good shape, that we could have run another 100 hours on it.  Well, that may have been the case sine they indicated that the oil was in good shape after about 12 hours of extreme conditions.  However, the presence of copper in the oil is a sure indication the the bearings are on their way out.

Here is what the bearing that failed looked like: 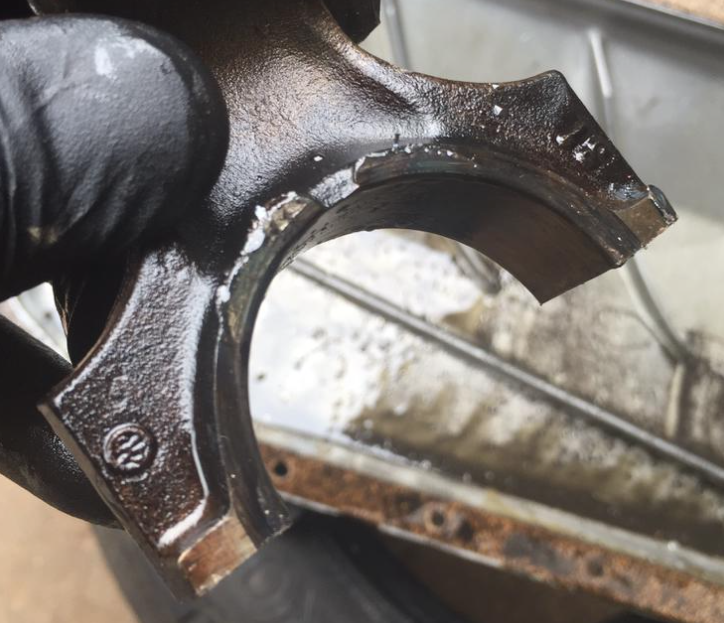 It essentially melted itself to the rod,  and the rest ended up in the oil pan: 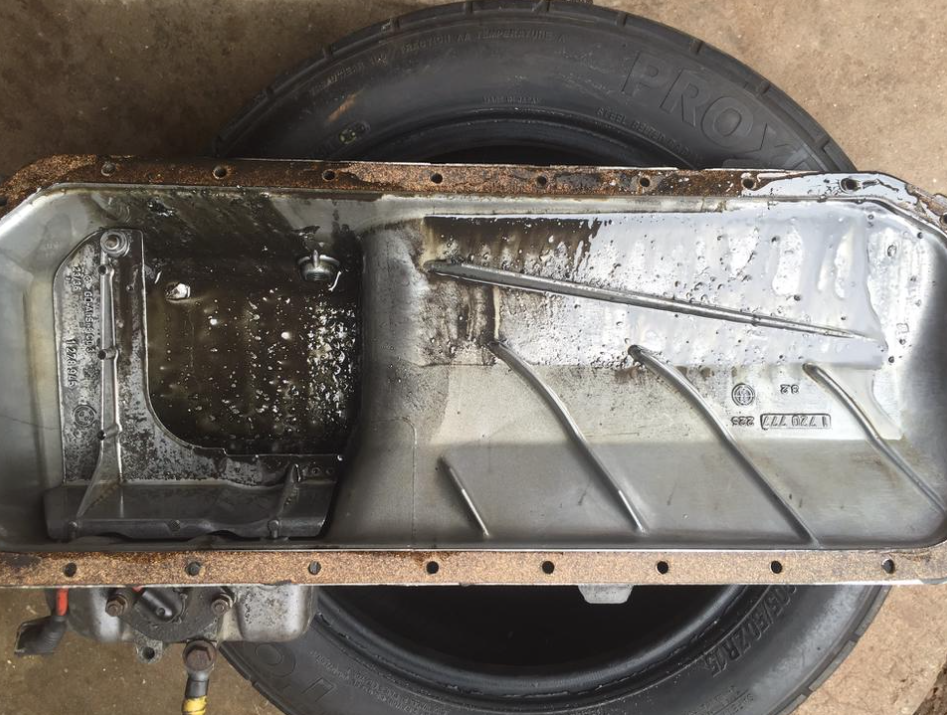 The bearing on cylinder number 5 doesn't look so good either: 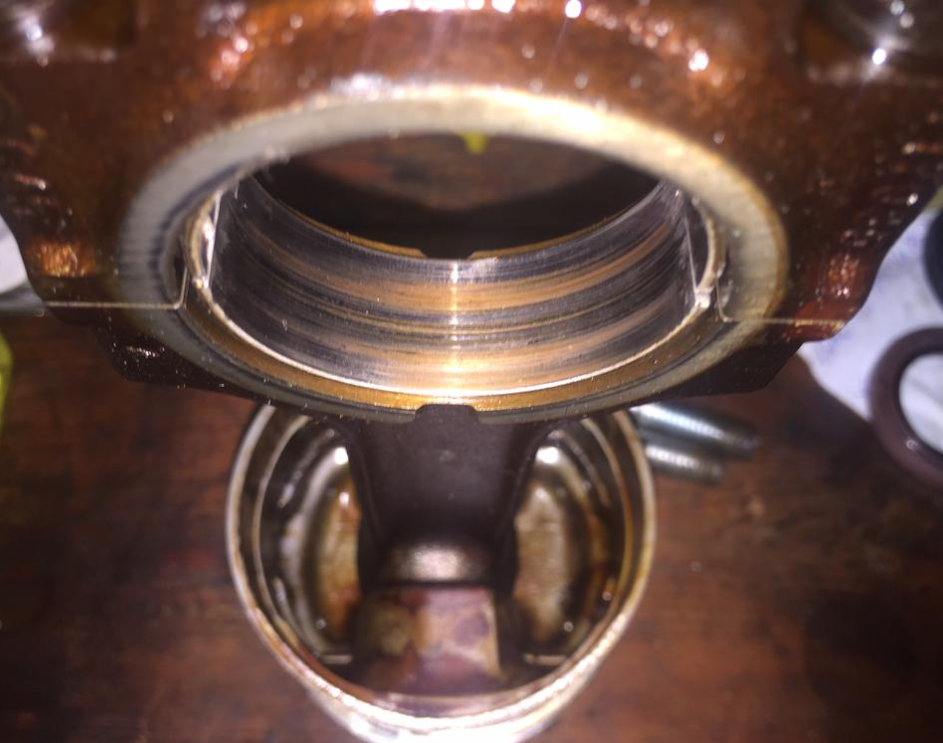 So, what could I have done differently?  Knowing the large presence of copper could have prompted pulling the motor and changing the bearings.  It would have been a lot easier that doing all this.

Moving forward, I will continue to use Redline 20w50 in the car.  It may cost slightly more, but it is cheaper than rebuilding the engine!  Oh, and I will be pulling an oil sample after every race! Spending $28 to understand the health of your engine is money well spent if you plan on keeping your car running.

Looking forward to our next race at Palmer Motorsports Park June 17-19.  If you are in the area and would like to come say 'hi', or possibly crew for the race team, post a comment below and I will reach out to you.