I'm babysitting a friend's Audi A6 2.8 this week and was recently greeted with the car overheating while traveling a short distance.

A quick underhood inspection revealed a less than perfect situation under the hood. The most notable was a cracked and worn looking expansion tank, a fan that seemed to be freewheeling that was easily stopped by dropping a soft cloth in its path of rotation and a lower radiator hose that was fairly oil saturated (oil saturated hoses tend to fail quickly and without warning, so don't ignore those pesky oil leaks). A full cooling system overhaul is in the works for this car, however today's focus is on the fan clutch replacement.

The clutch may disengage allowing the fan to slip 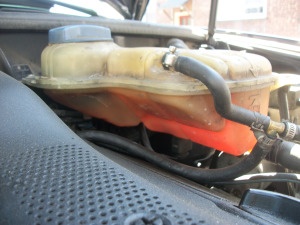 The purpose of the fan is to allow the appropriate volume of air to circulate through the radiator and is part of the system that keeps the engine at the correct operating temperature. As the engine operates under a variety of conditions the demand for cooling airflow changes and it is the job of the clutch mechanism to manage that demand. Under low load, highway cruising the clutch may remain inactive and the fan "slips" on its bearing and spins gently. Under higher load conditions such as stop and go driving, towing, or driving with A/C, the clutch will lock up and the fan will rotate at the same speed as the pulley it is attached to. When the clutch is inactive it does not use engine power which increases the engine's efficiency.

The following tools are needed:

The replacement fan clutch I used is a Behr unit, which is the OEM part for this application.

IMPORTANT
**The large nut that is affixed to the clutch is left hand threaded, this is opposite of the norm**

While bracing the pulley you need to loosen the nut by turning the wrench clockwise. Once the nut is removed, there is sufficient space to wiggle the entire assembly out of the engine bay. 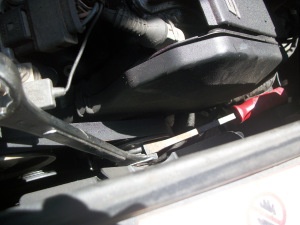 In this instance I did not have a pulley holder available so I used my shortest prybar and wedged it against the framehorn to prevent the pulley from moving.

Swapping out the clutch is a simple affair of removing four 8mm allen fasteners and tapping the fan once or twice to release it from the clutch. Make sure that your allen socket is firmly seated in the head so that you do not strip the head of the screw. 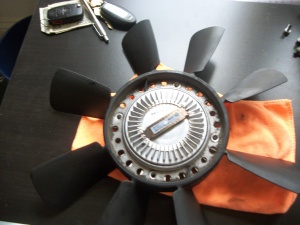 Attaching the new assembly is literally the reverse of removal. Even in the A6's extremely tight engine bay, this is a simple job that can be completed in a half hour.