This widebody 1971 BMW 2002 tii Touring is a pure racing-inspired BMW from the 1970s, and you’re not going to find another one that looks anything like it.

People building street-legal replicas of their favorite racing machines isn’t a new thing. Even as early as the 1960s, enthusiasts have taken their favorite motorsports disciplines as inspiration for their own road car builds. It’s just emissions standards that make it difficult to recreate the powerplants of those amazing machines.

Take Alexander Echeverri’s 1971 BMW 2002 tii Touring for example. He purchased it and imported it straight from Germany in 2013. During its time in its motherland long before Alex’s ownership, the car's original body shape was modified to look like one of the competition cars from the Deutschen Rennsport-Meisterschaft Racing Championship in Germany (abbreviated as DRM). The DRM was an FIA-sanctioned touring car series where a team called GS-Tuning raced in the T2.0 class.

Alex’s 2002 Touring also predates emissions, so an engine just as incredible as the one in the GS-Tuning car–or even more so–could be installed under that hood.

Obviously, the original owner of this 2002 tii Touring in Germany wanted to recreate the GS-Tuning look. At the same time, that owner didn’t just slap all the parts on and call it done. The work done to it prior to Alex’s ownership is second to none. The widened flares are molded into the front bodywork like they were made by BMW. The rally-style lights are a new addition that Alex upgraded to after his purchase in 2013, along with the front air dam and splitter combo. 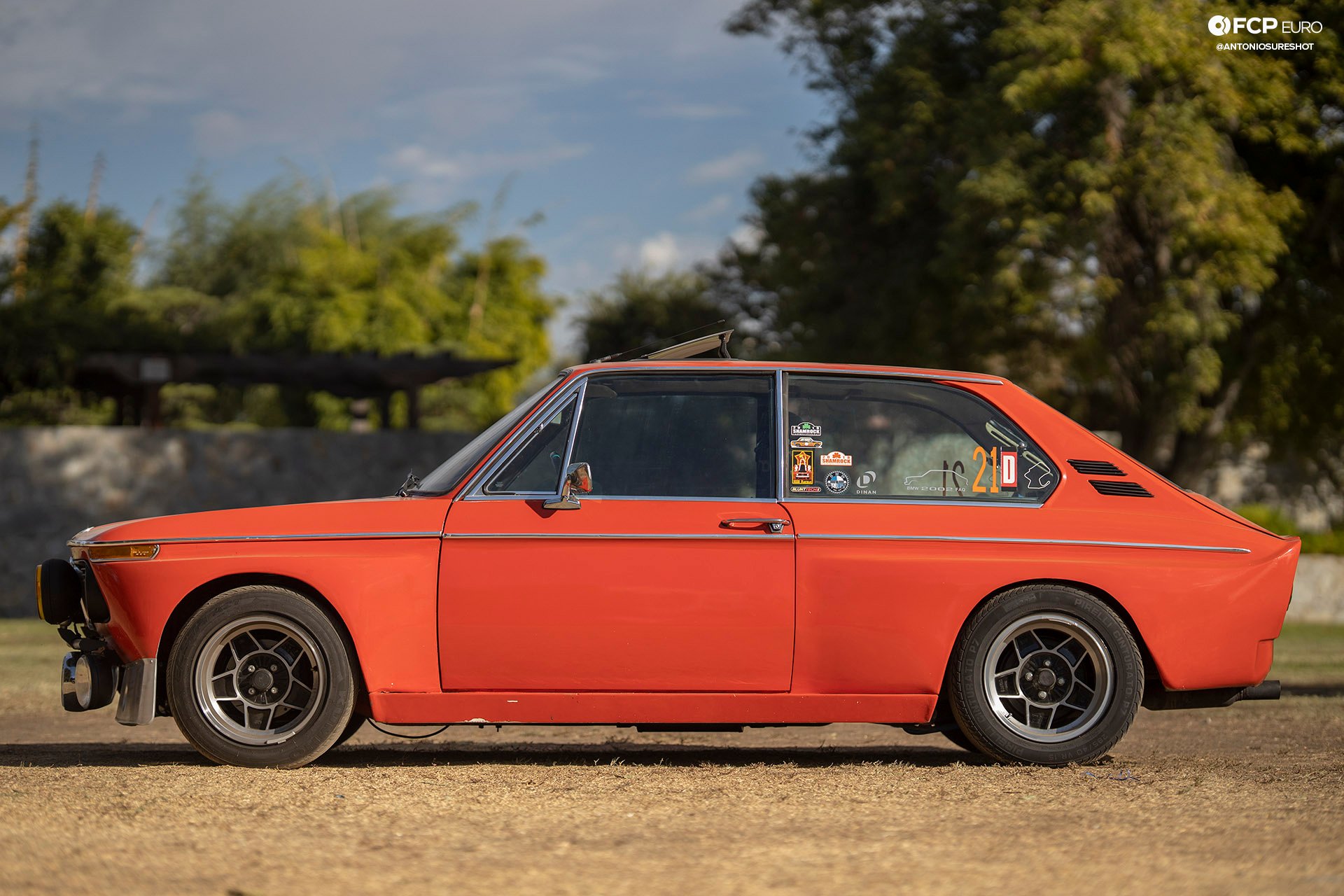 From the side, you can see more of that beautiful bodywork. The rear flares are molded into the shape of the rear hatch lip. The addition of the subtle side skirts not only help the entire widened body flow like OEM, but also help give the car a much lower look. This side view also gives you a chance to appreciate the unique profile of the touring hatchback version of the “02 series” body. 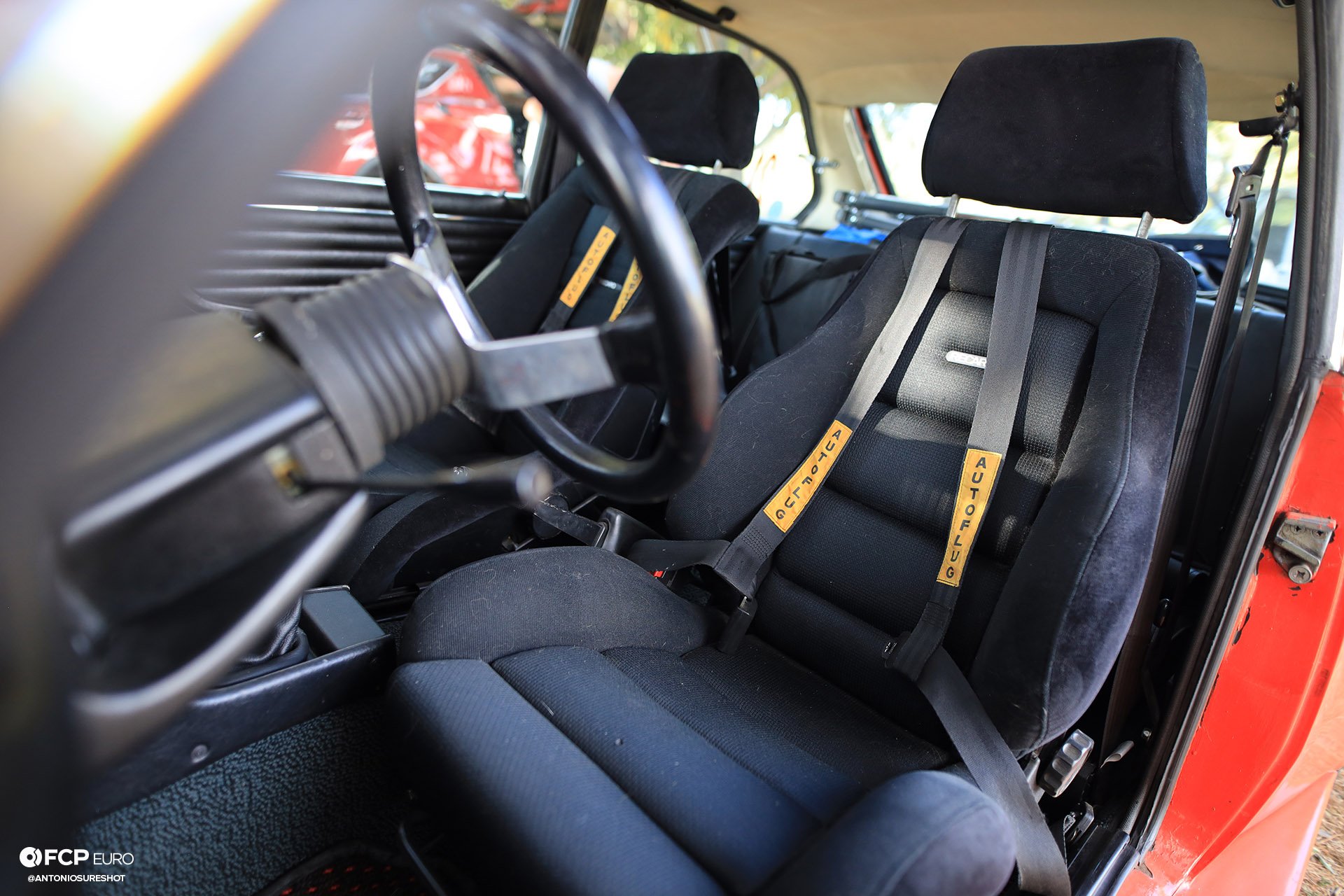 Inside, a set of vintage Autoflug four-point belts give you security in concert with the reclining Recaro seats. For daily driving, the original three-point harnesses remain. 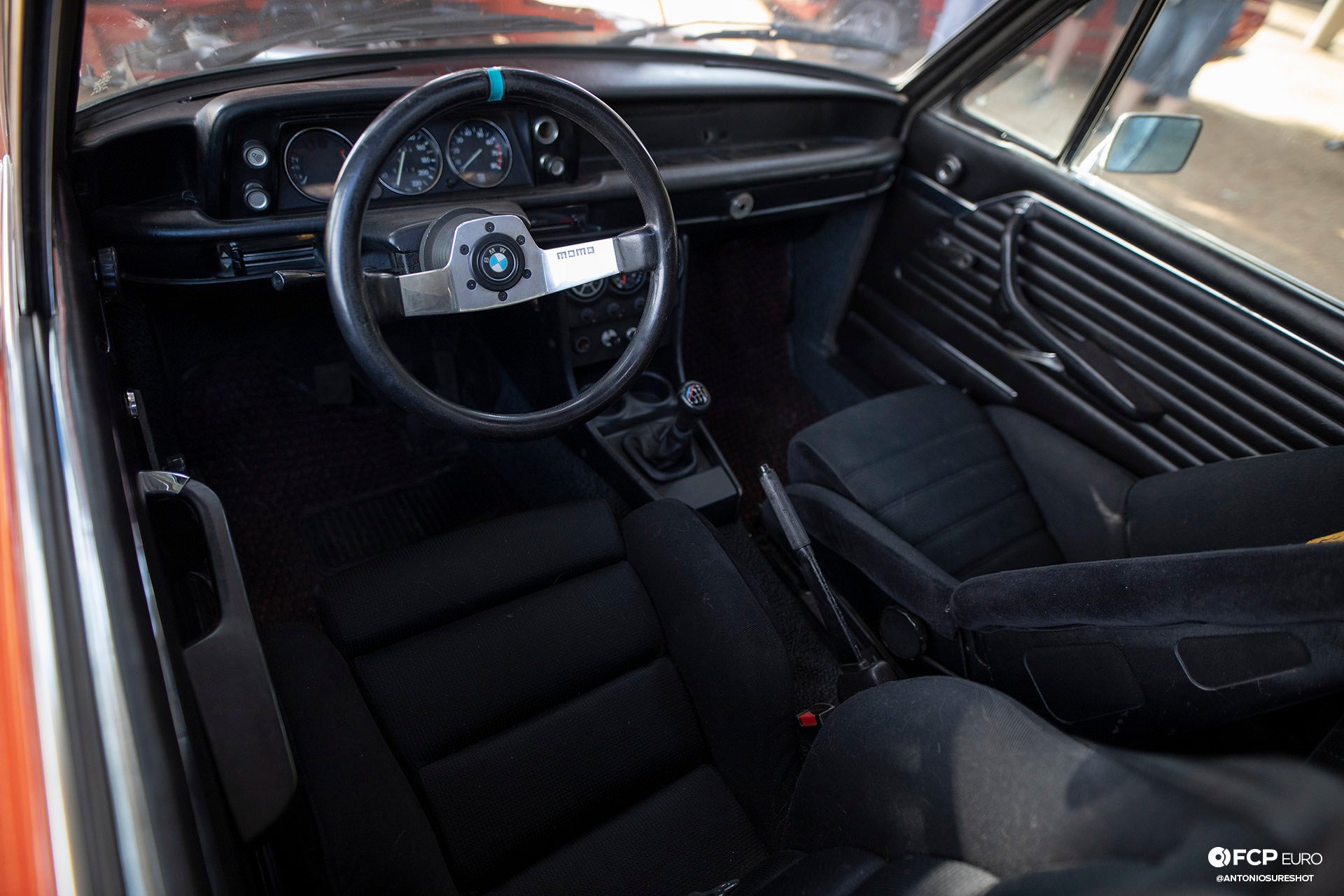 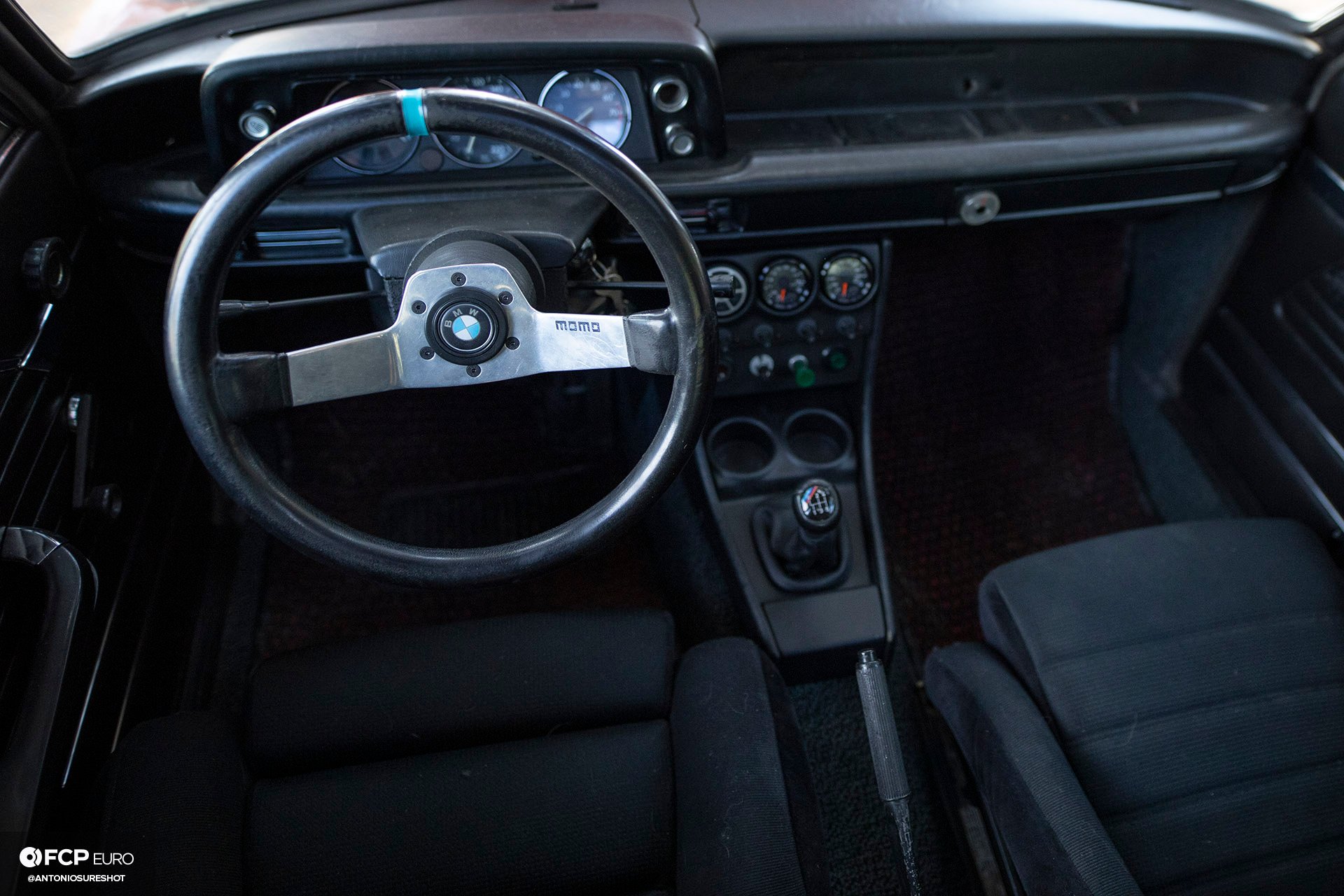 Even as an added part, the Momo steering wheel fits in with the rest of the car. The black rim and polished metal spokes match the trim. The BMW horn button would have made it a rather subtle addition, but the Momo logo lets you know it’s not a factory part. 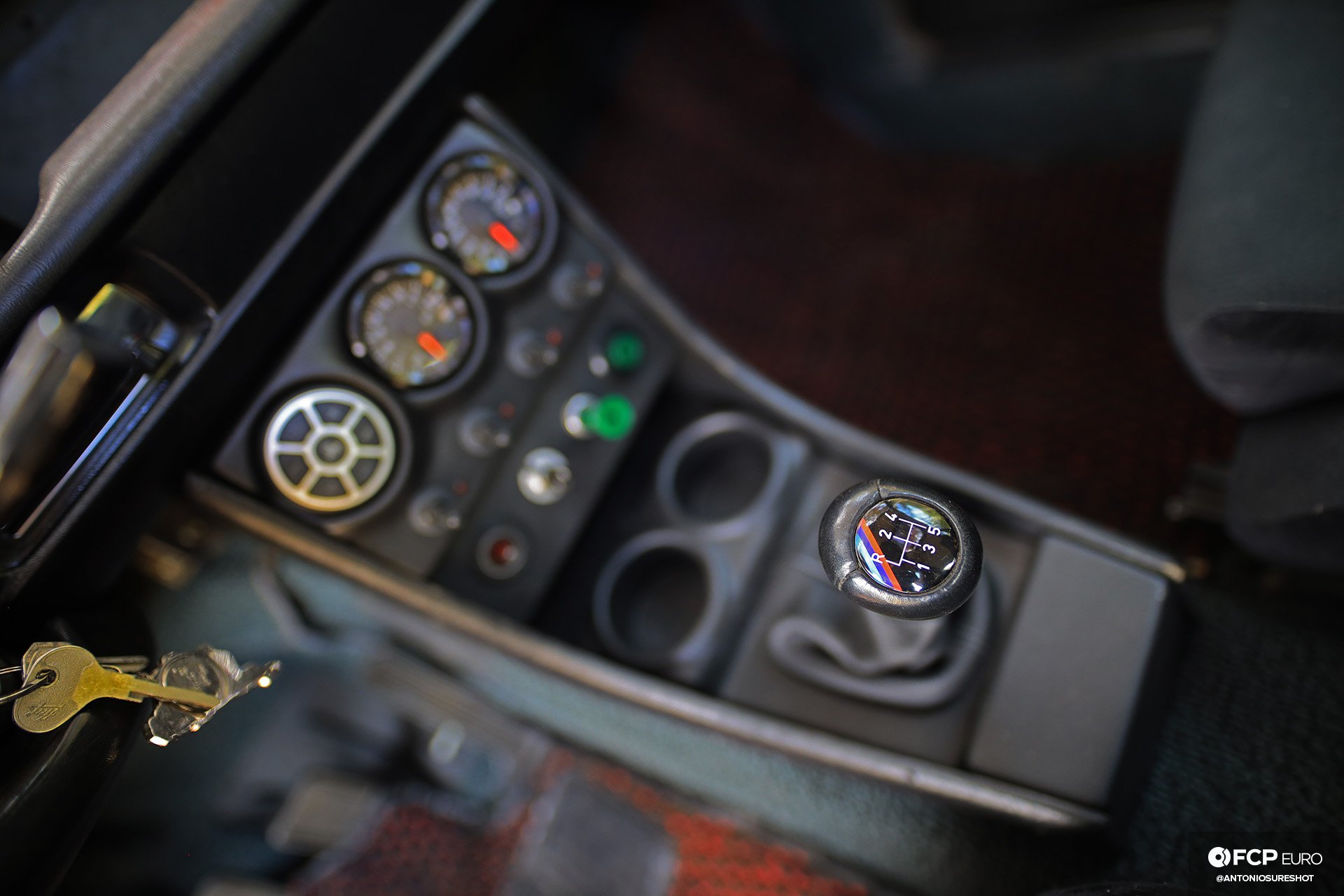 The BMW M-sport inspired shifter also gives you a reminder of this classic car’s dogleg gearbox. First gear is over and down rather than over and up. However, it is a close-ratio gearbox and allows this engine to get up to speed quickly. The E30 M3 clutch gives the entire shifting process a more modern feel at stops and between gears. 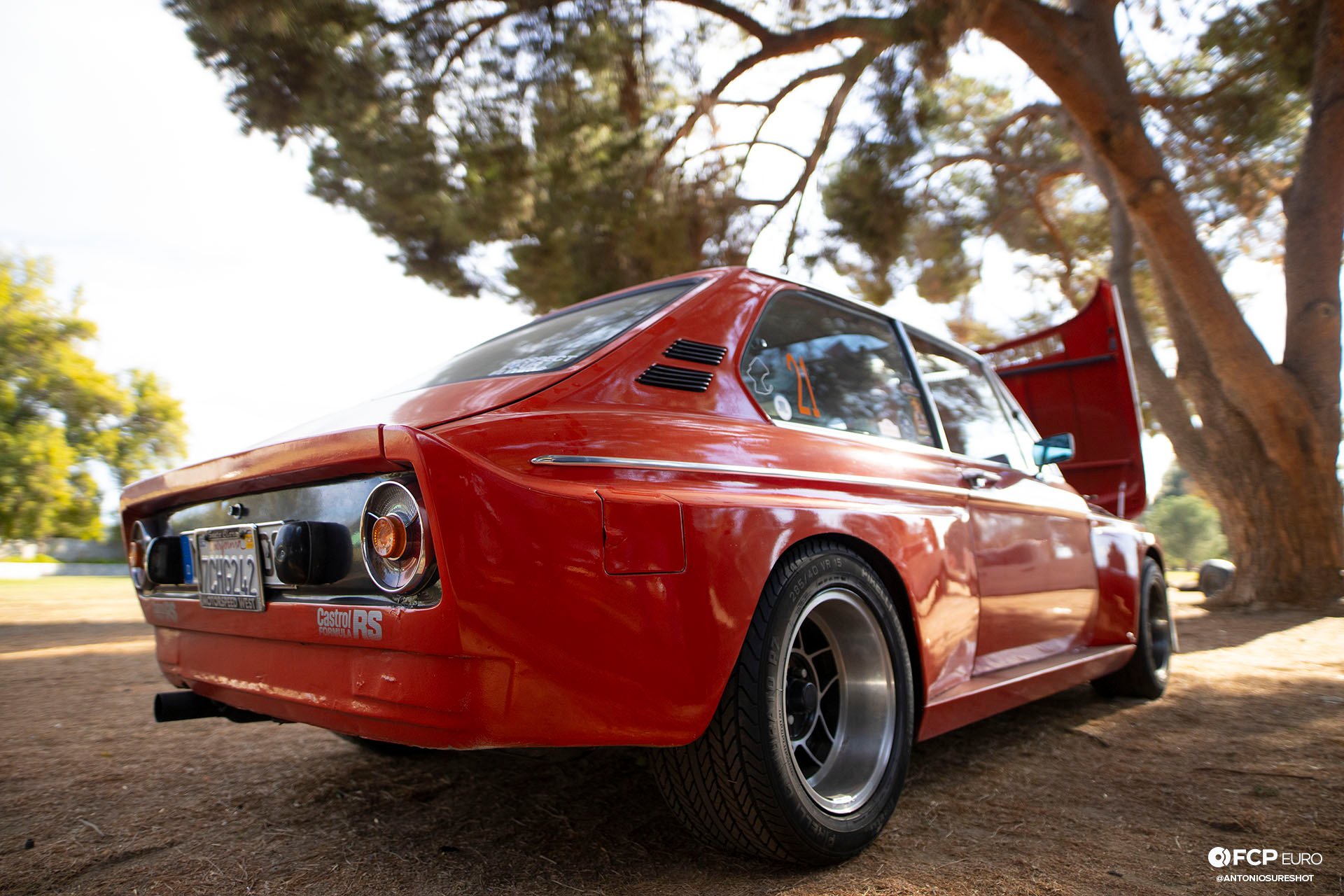 Heading back to the exterior, we get to see more of that amazing bodywork with the fuel door. The original 2002 fuel access is a simple, twist-off metal gas cap that’s exposed to the elements. Here, the German owner incorporated a fuel door that was reformed to the shape of the boxy flare. It would have been easier to have cut a hole in the fender flare, but it would look out of place compared to this custom solution. 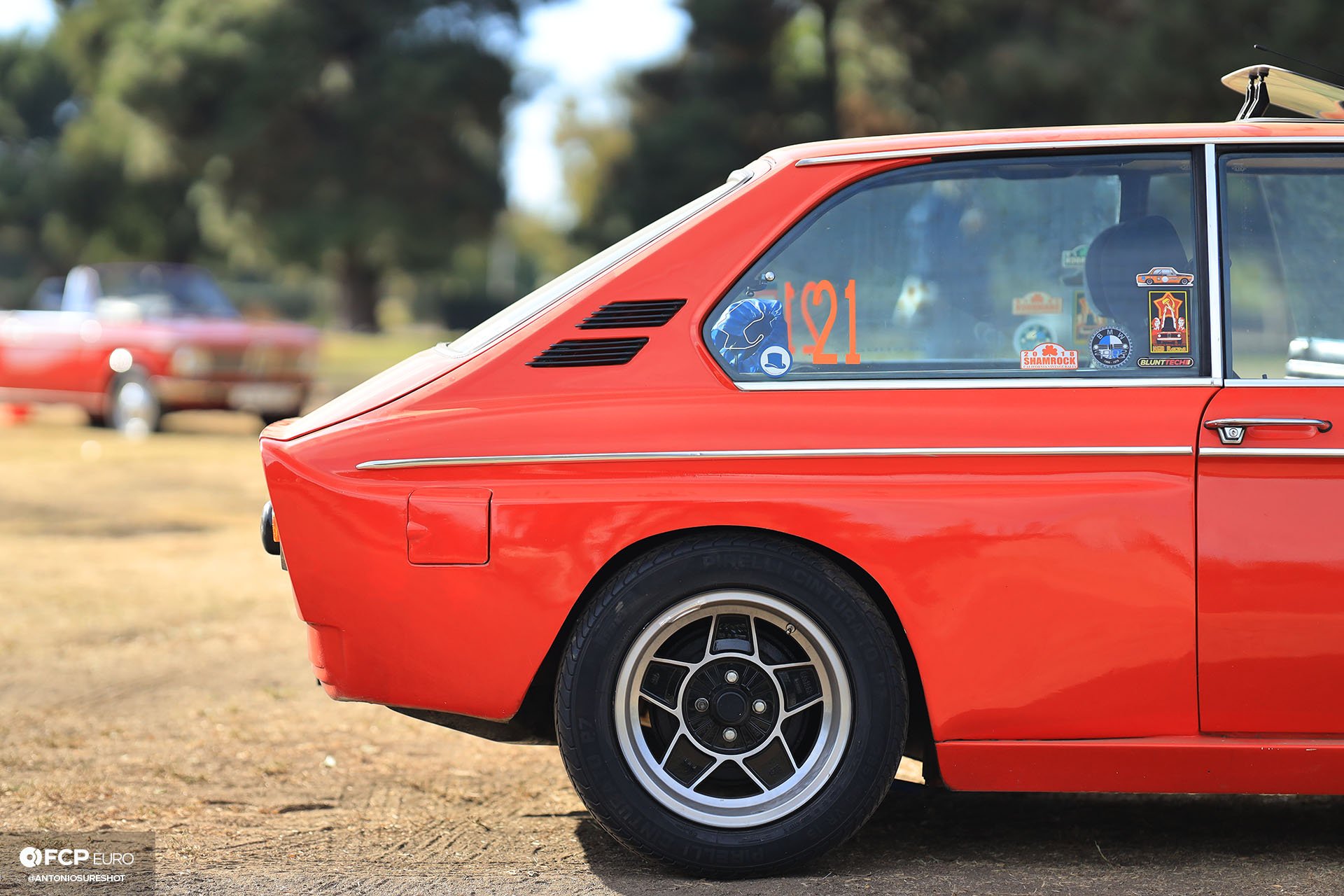 Since the body was widened, it allowed for aggressive wheels and tires, just like the GS-Tuning race cars. In this case, it is a set of ATS Classic 15x9 wheels with a set of vintage Pirelli Cinturato P7 tires wrapping around them. The fronts are 225/50R15 while the rears are 285/40R15. Since there is more rubber available to the pavement during acceleration, the 4.10:1 ratio limited-slip differential could be set more aggressively in its clutch locking. 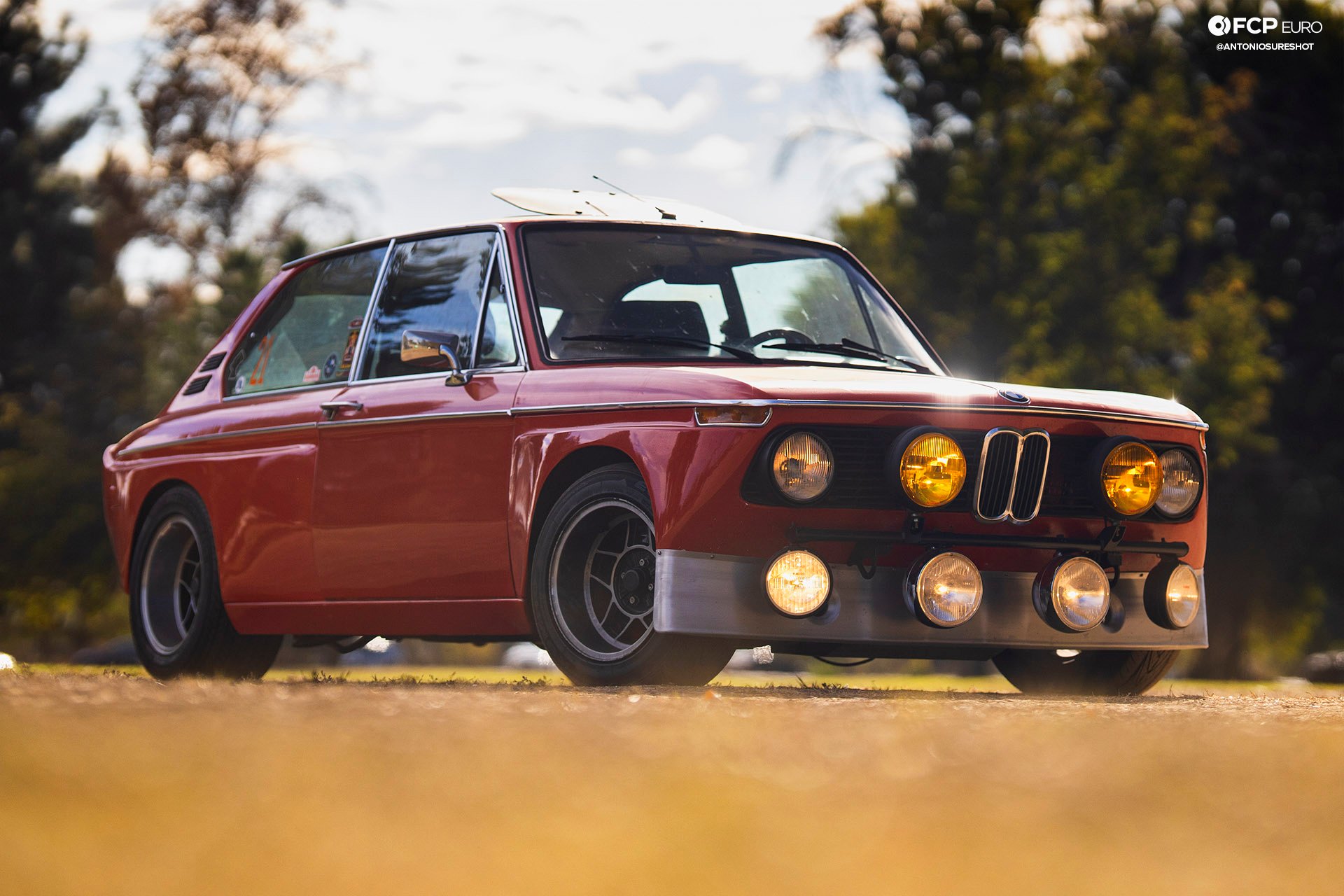 The suspension is straight from the 1970s using a set of Bilstein rear shocks mounted upside down. This trick was used by many race teams (like Alpina) at the time, but it required the shocks to be made that way. Doing this allowed the heavier shock body to be mounted to the body of the car rather than to the suspension. The reason for this design was to reduce unsprung mass at the control arms. The fronts are a set of Alpina adjustable coilover struts. Alex also added a set of adjustable 23mm Ireland Engineering sway bars to further reduce body roll during cornering. 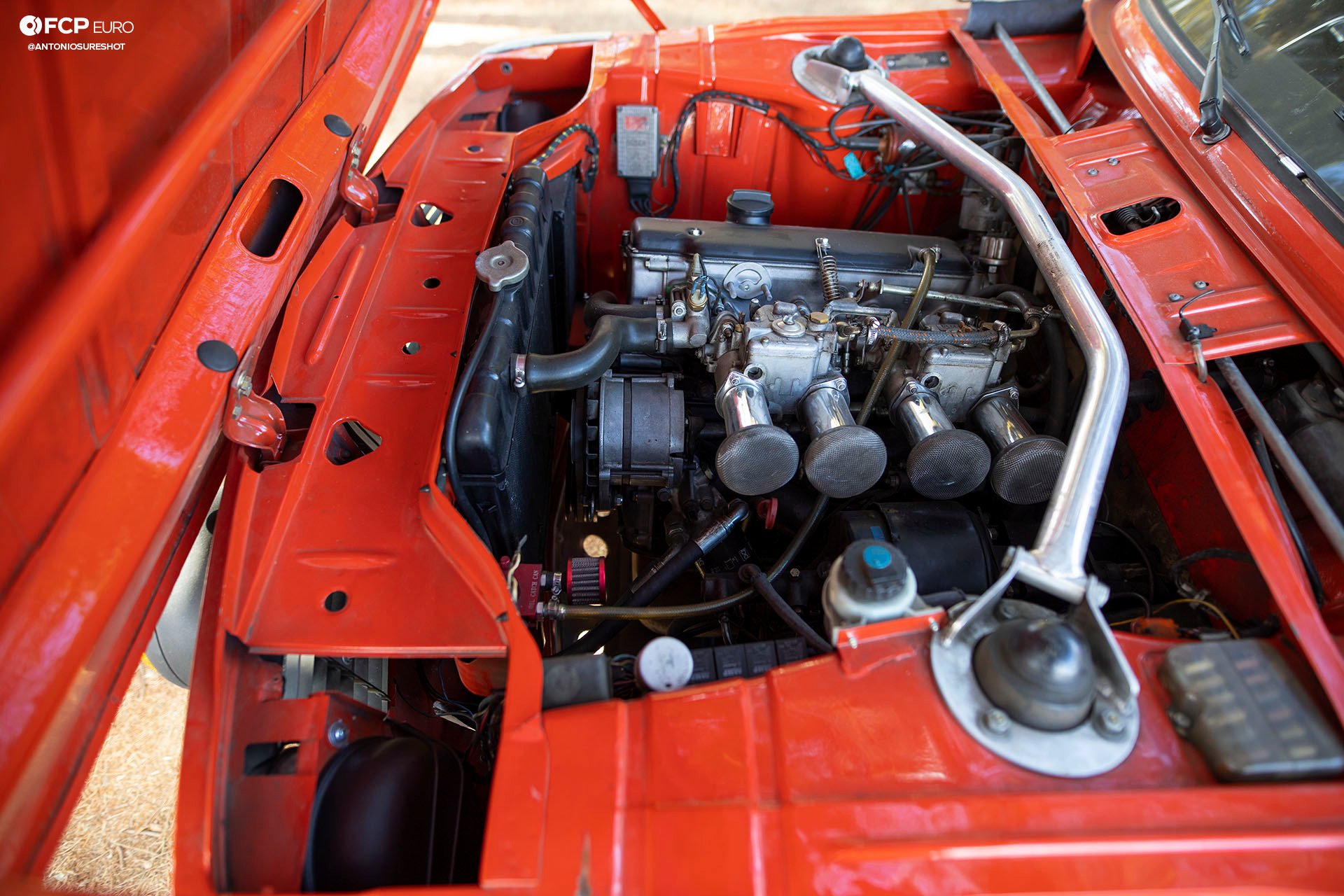 Earlier, we mentioned that the GS-Tuning 2002 ti used a Formula 2 two-liter engine, but the engine under Alex’s 2002 is not quite that extreme. That doesn’t make it any less extravagant though. What you’re looking at here is a hybrid engine build. It has the block of an S14B23 from an E30 M3 with the cylinder head from a 2002. The reason it’s able to do this is because the S14 block is based off of the M10, the original engine design used in the “02 series” chassis. In this hybrid configuration, the S14’s displacement goes up from 2302cc to 2333cc. 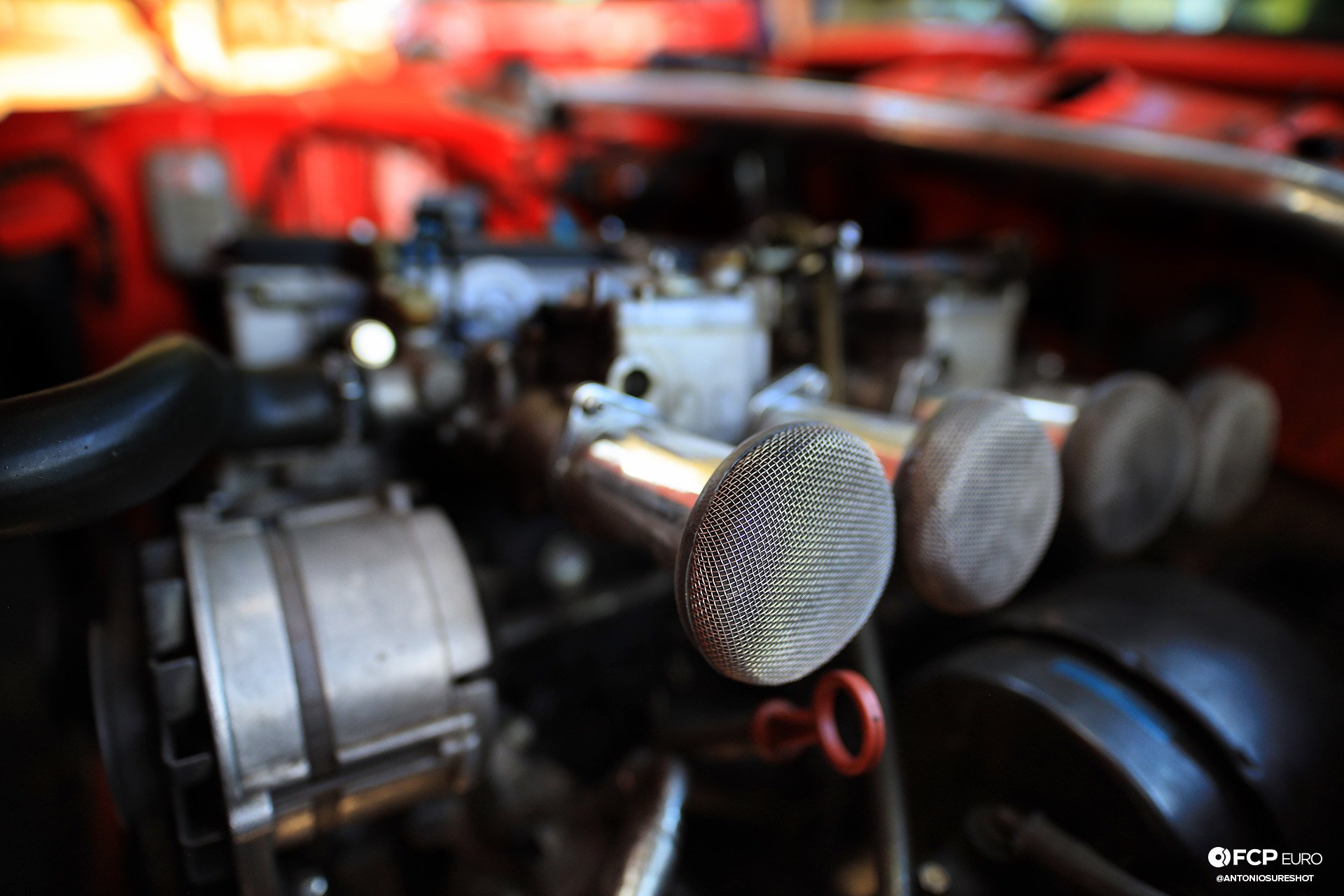 This also means it goes from a modern, fuel-injection intake to a carburetor intake with a pair of Weber 45 DCOE side-draft carburetors with microphone-like filters over the long intake trumpets. 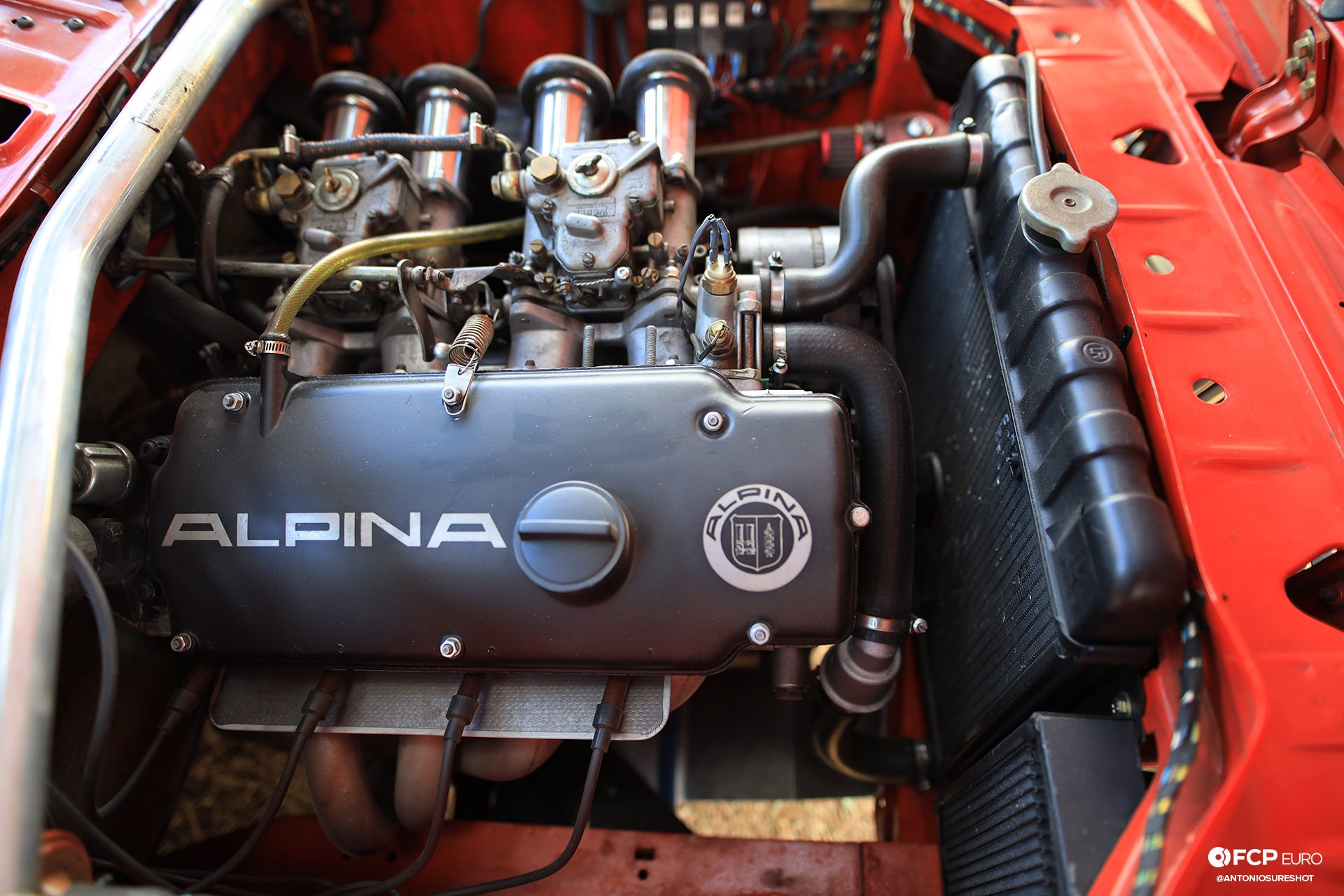 It also converts the S14 engine from a dual overhead camshaft to a single overhead camshaft, as the Alpina headcover gives away. Inside the engine, a Schrick 304-degree camshaft with 10.7mm of lift on both the exhaust and intake valves was installed. This means it’s designed for high rpm top-end performance rather than low-end grunt. 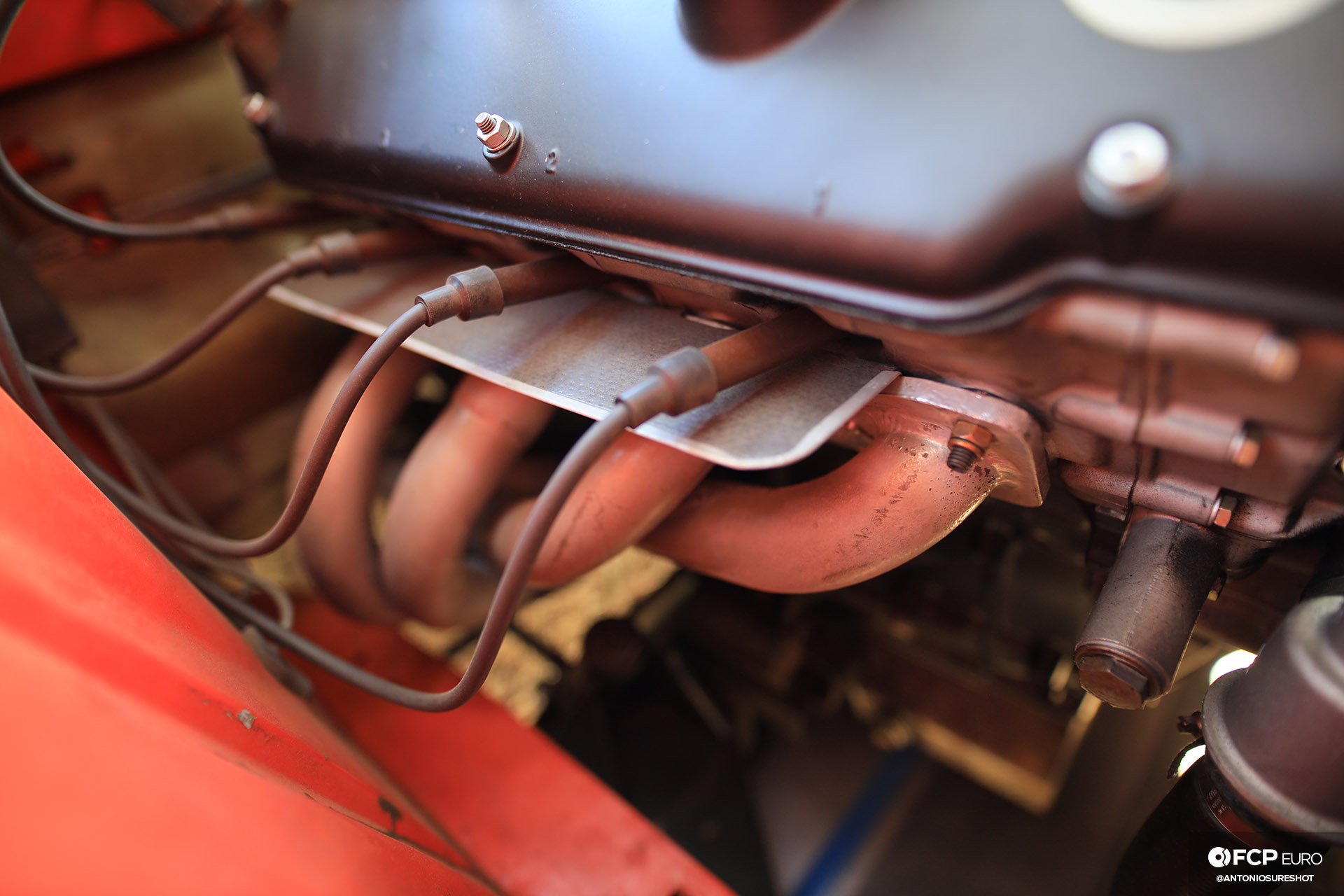 That high, 7800-RPM redline with the addition of the Alpina header gives this Touring an exhaust note straight out of Hockenheim in the 1970s. 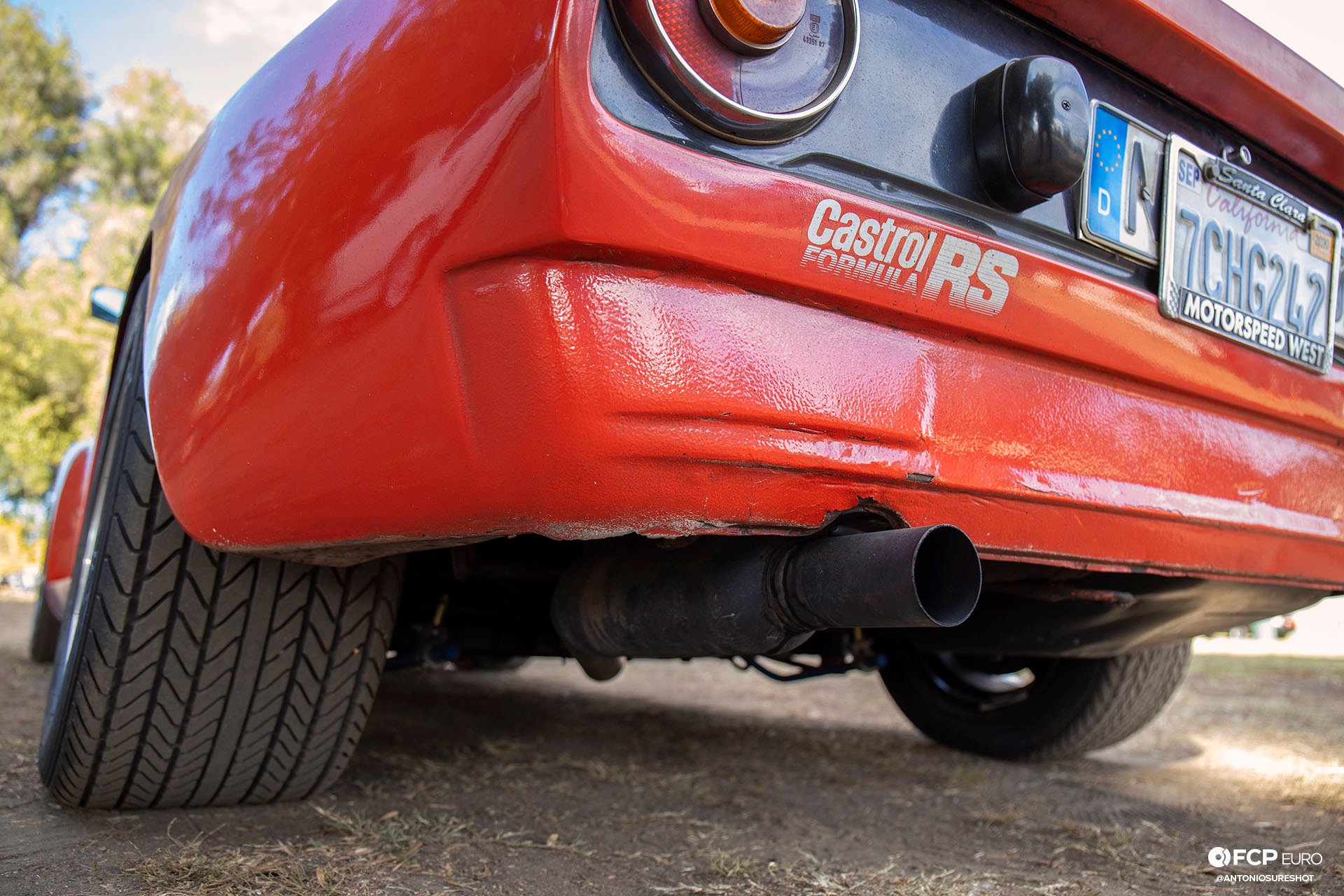 That is a particular sound that most racing enthusiasts probably wouldn’t even recognize today unless they were there in the old glory days of the 1970s–except possibly at a vintage race in Europe where that type of engine might be found. 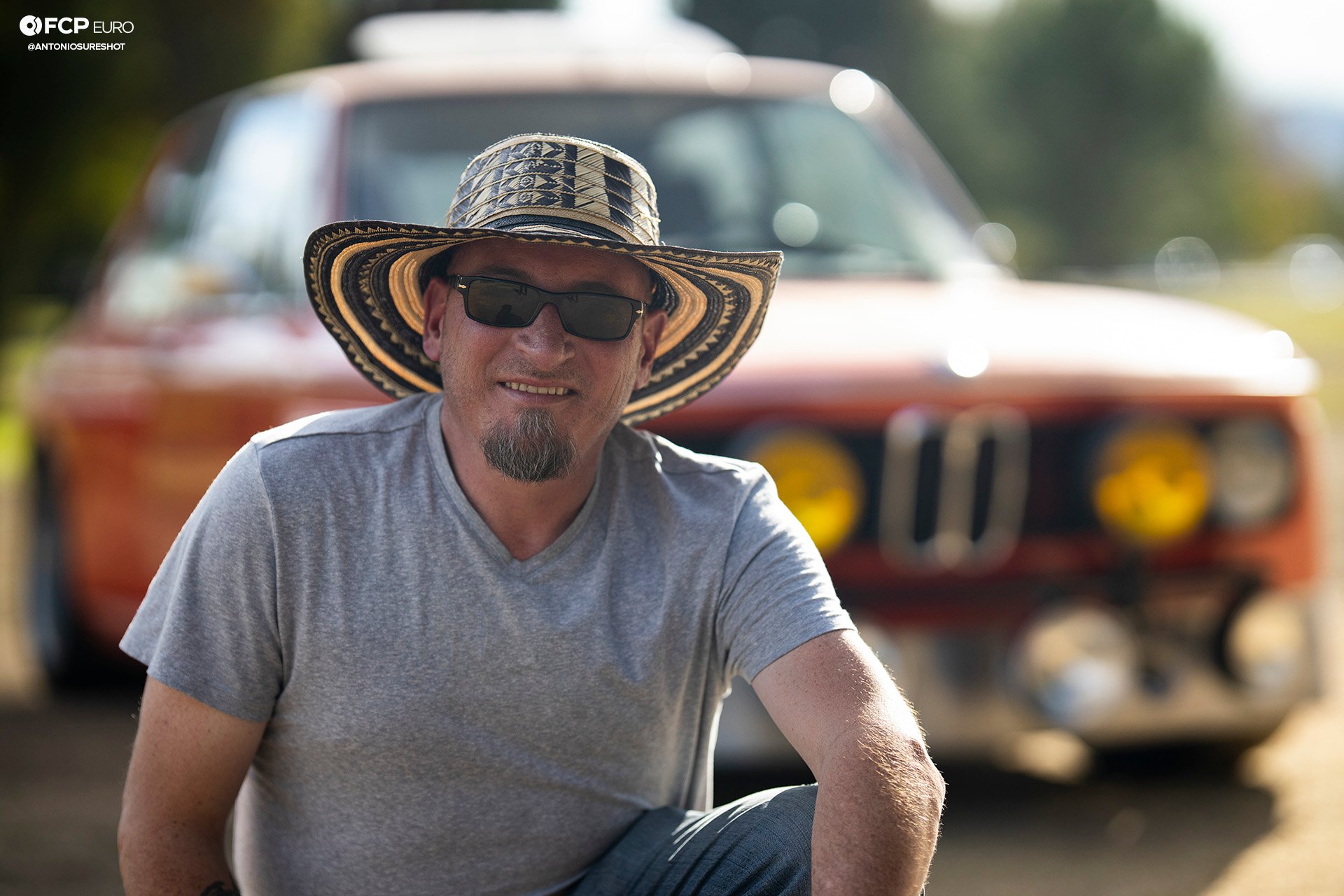 “What sets it apart besides being a Touring version of the BMW 2002 tii,” says Alex, “is that body kit and a lot of upgrades. My plan is to keep it as is, since it is a time capsule from the 1970s.” 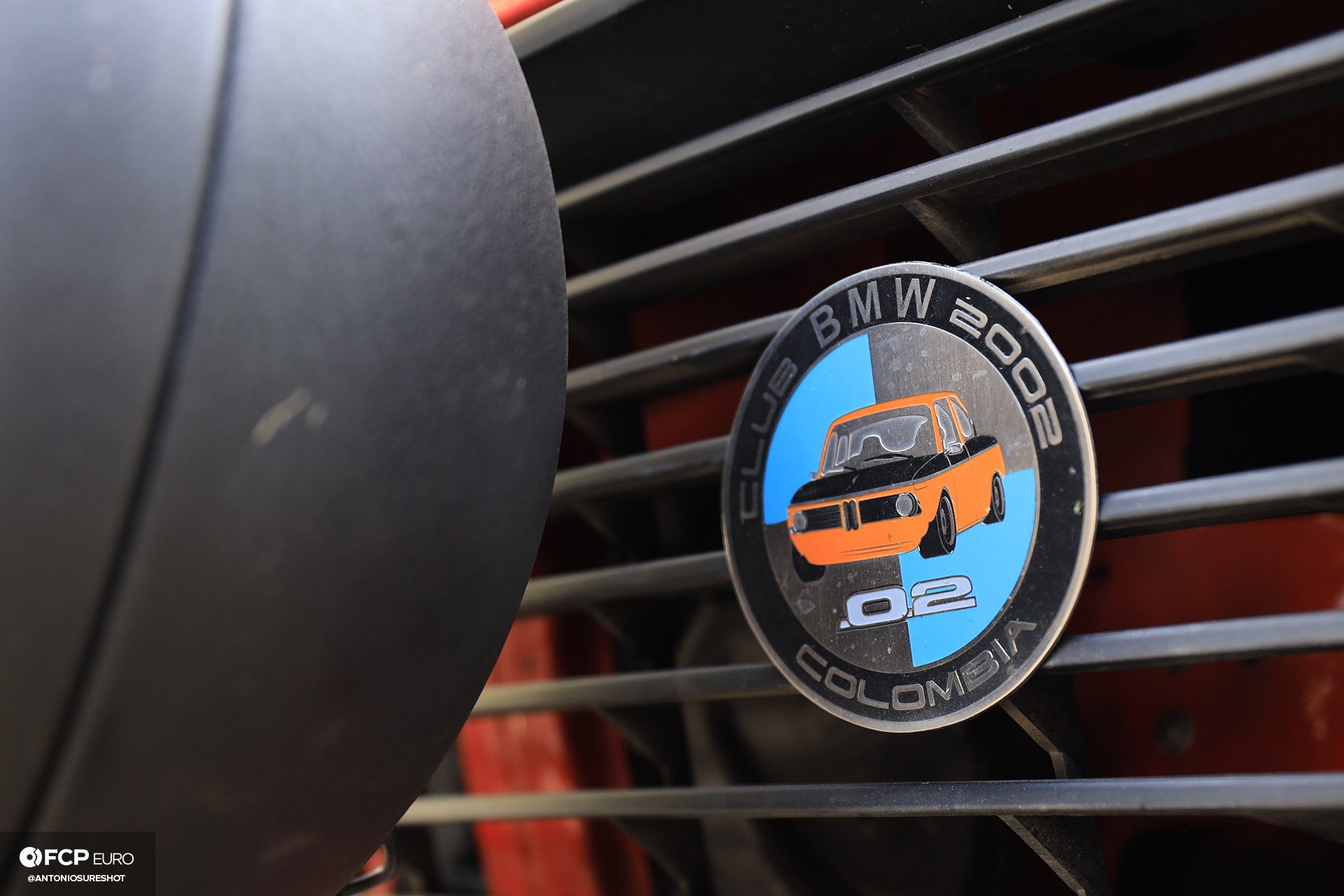 Much like his 2002 tii Touring, Alex is an import himself as he was born in Colombia. In the area where he lived and developed his love of the automobile, the BMW “02 chassis” was very popular. 1602s, 1802s, and–the best of them all–the 2002 ti and tii were all around him. He carries that influence beyond the car but also with this Colombia BMW 2002 Club badge on the grille of his Touring.

Since the car is a time capsule to Alex, there won’t be much he will be doing with it in the future. “The car is so much fun as is,” he says, “I will keep it this way for as long as I can. Maybe I'll upgrade the suspension some more and possibly install a set of individual throttle bodies, but that would be it.” 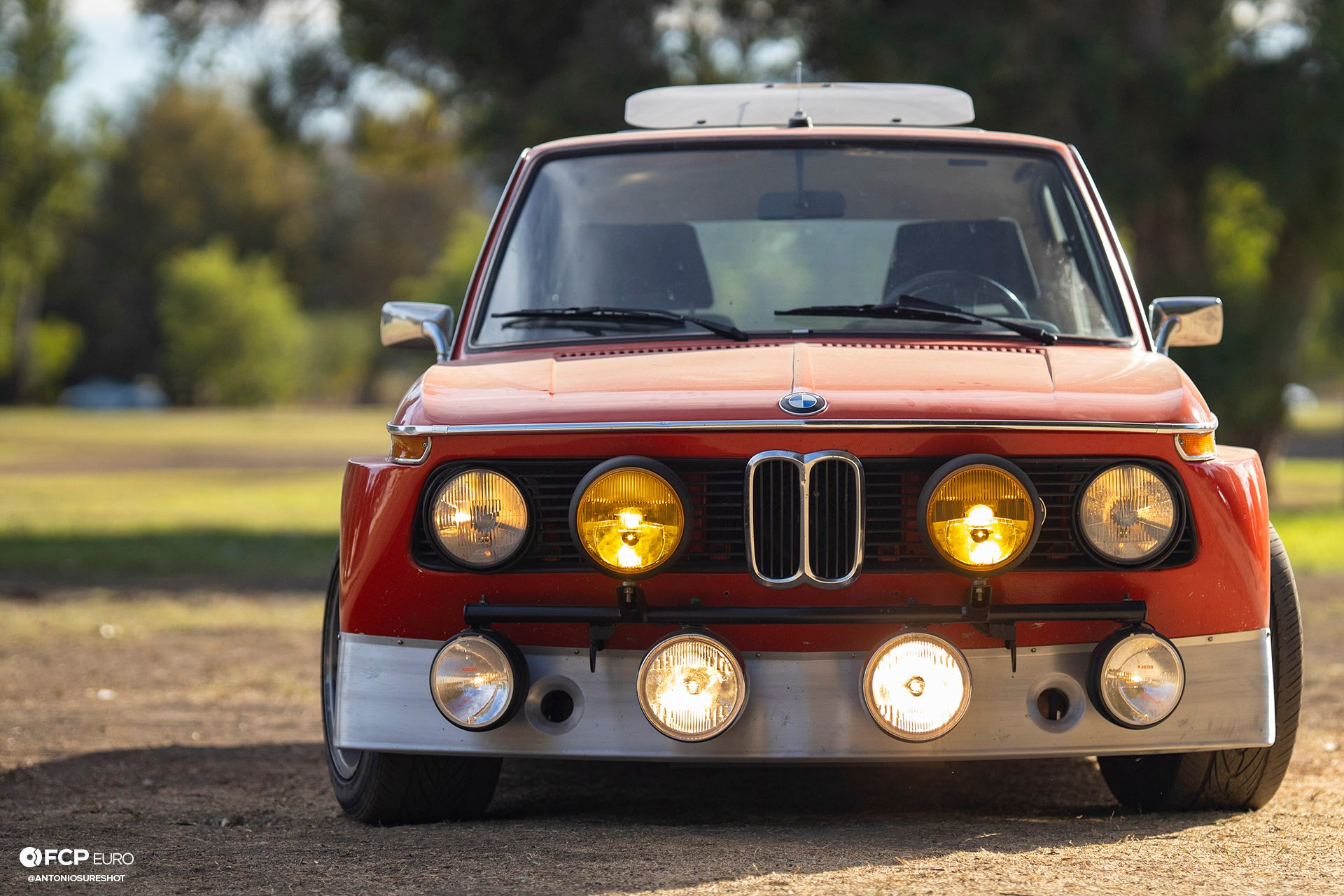 With the way emissions controls are in this day and age, it’s hard to make true, street-legal replicas of the race cars many of those born after 1980 grew up with. There are many of us who long to create a streetable version of a DTM-specification E30 M3 or an FIA Super Touring-specification E36. Oh sure, in certain states you could get away with it, since not all states have emissions testing. However, that’s only if you don’t bother your local constables. Those cars would be in no way truly legal if caught with their racing-designed engines.

Instead, we must look at older cars, those that predate emissions standards before 1974. Cars like Alex’s 1971 BMW 2002 tii Touring and its Deutschen Rennsport-Meisterschaft-inspired design from the 1970s. It not only gives us an amazing car to drool over but one that gives us a hint as to how things were done at that time. It makes us reflect on what we do now and potentially gives us the motivation to create something just as crazy today, even with the bother of modern legal limitations. Then again, you can put it on a trailer to get around the street-legal problem but where’s the fun in that?

If you like this BMW 2002, you can find additional BMW-related content at bmw.fcpeuro.com, as well as more build features like this one, here. If there's anything specific you would like to see, or if you have any questions/comments, leave them in the comments section below.