From the outside, this ultra-clean E32 BMW 750iL may look average. However, this AC Schnitzer-equipped sedan packs a complete six-speed manual swap.

While later iterations of BMW’s venerable seven-series sedans tend to steal the spotlight in terms of popularity, old-school examples, like Jordan Baker’s E32 AC Schnitzer-equipped BMW 750iL, still hold a special place in our hearts. It’s true what they say; “Classics never go out of style,” and Jordan’s 750iL is no exception.

An affection for BMWs runs in the Baker family. Jordan’s brother, Kameron Baker, is the proud owner of an AC Schnitzer-equipped E38 BMW 750iL and a turbocharged E30 BMW 325i as well.

Jordan’s love for BMWs began with his first car, an E32 BMW 740i. He instantly fell in love with the car after lightly modifying it, but unfortunately like most first-love stories, all good things must come to an end. Jordan was rear ended in his 740i and the car was left totaled.

He then purchased a non-running E32 BMW 750iL for $400 early last year and after some severely needed maintenance using OEM replacement parts from FCP Euro, he finally got his ballin’ on a budget E32 750iL in running order. That’s when Jordan decided to build what he calls the perfect seven-series sedan as a daily driver. 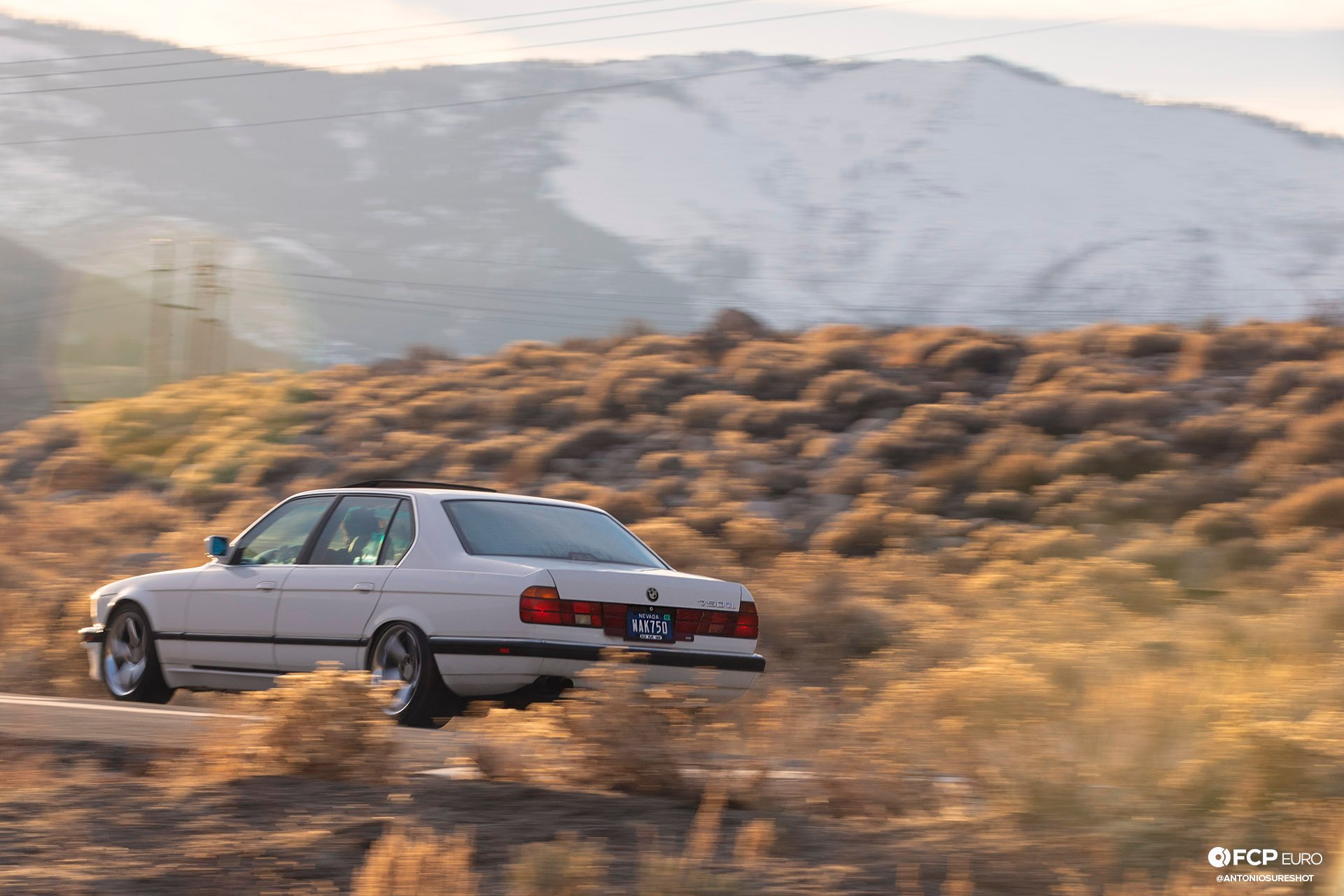 To pull a page out of Alexander Graham Bell’s book, “When one door closes, another opens.” After owning the aforementioned V8-powered E32 740i, Jordan was exciting about upgrading to a 750iL for many reasons. What appealed to him most about the full-size luxury sedan was its long wheelbase and throaty V12 engine; two attributes that only the 750iL could offer in the complete lineup of second-generation seven-series sedans. 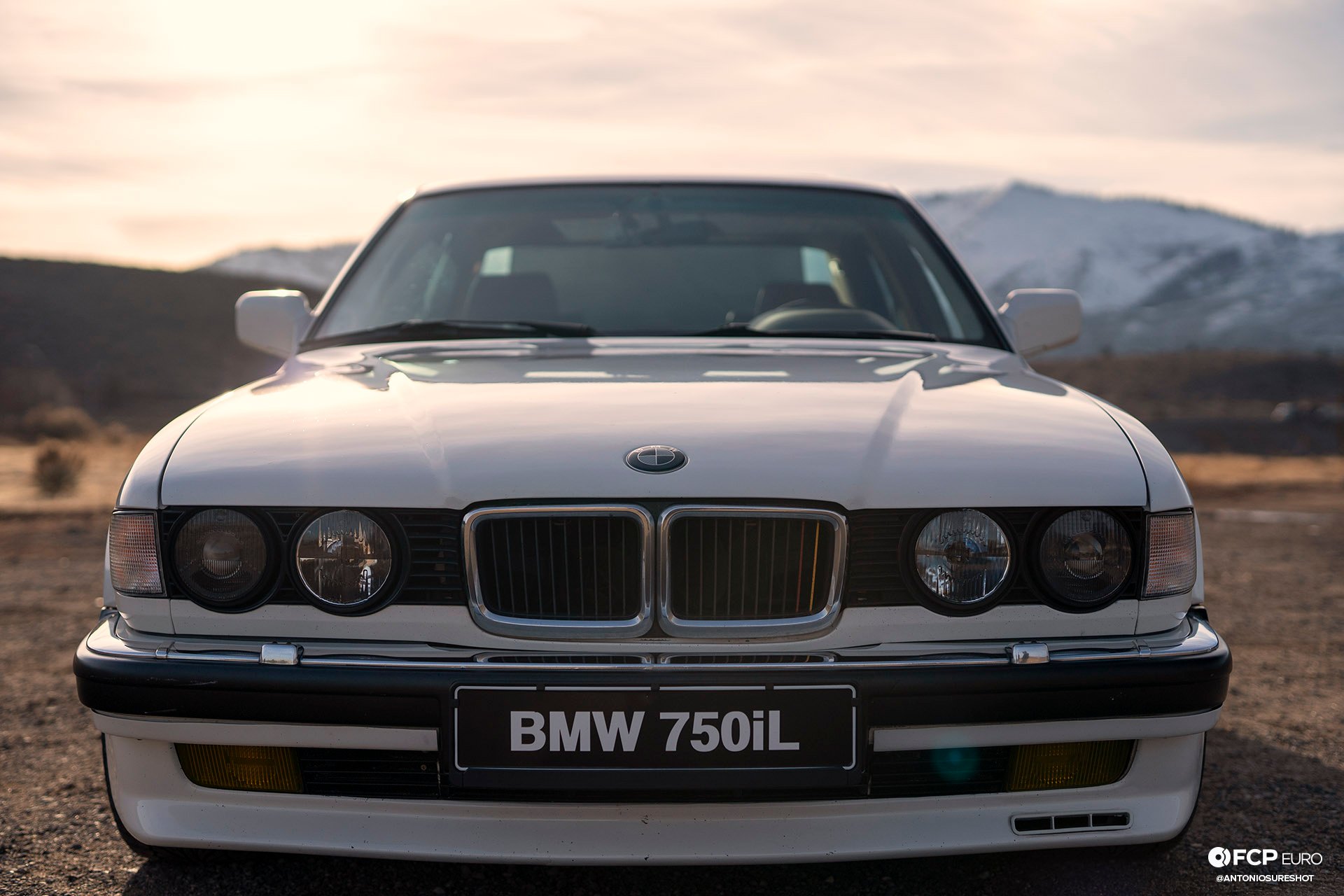 Fans of the seven-series sedan will know that the second-generation was widely considered one of the most technologically advanced luxury cars of its day. It's even said that the E32 seven-series set the standard for luxury cars as a whole in the 1990s. 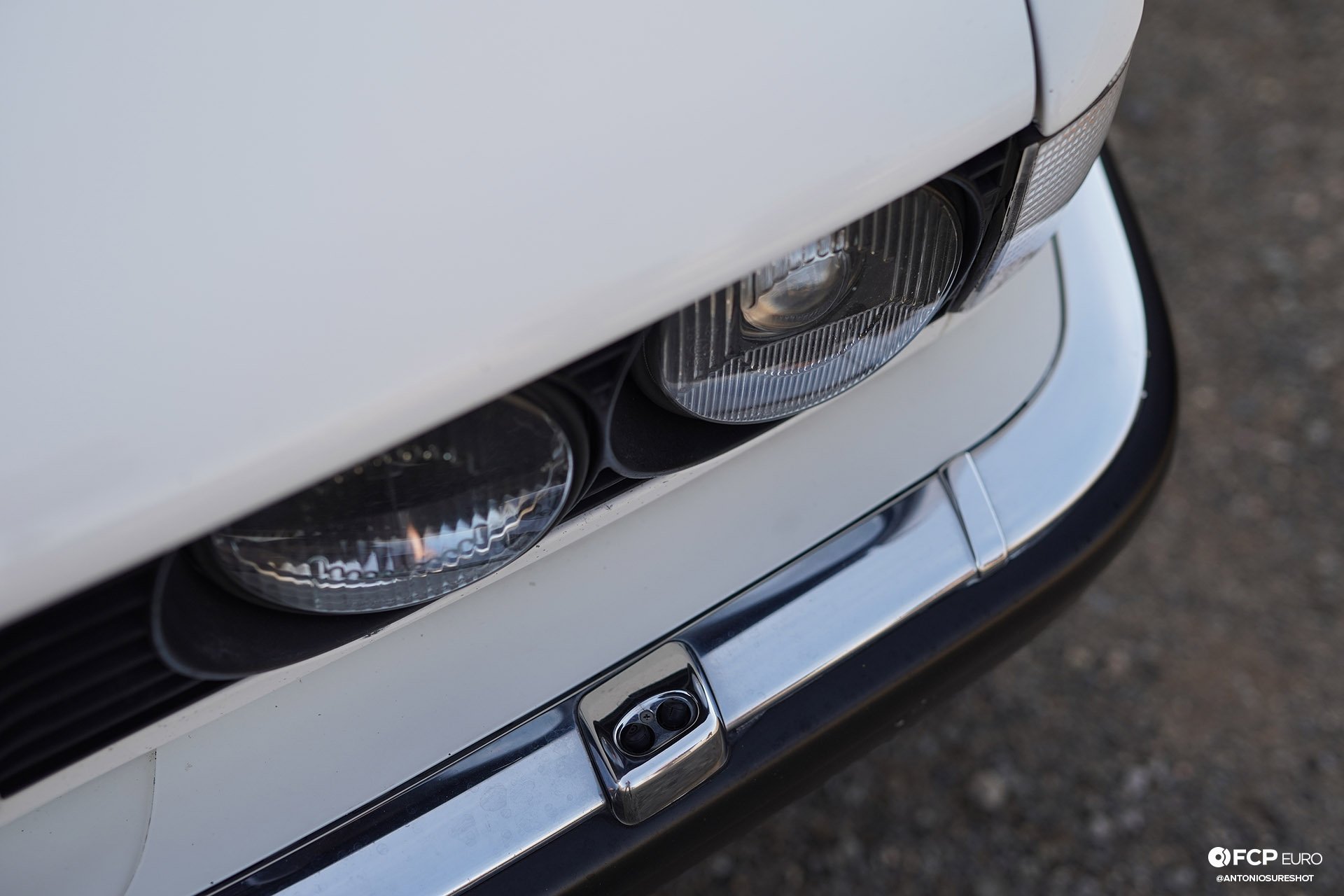 Upon further inspection, you might notice the hood doesn't line up perfectly with the rest of the vehicle when viewed from above. However, when Jordan purchased his 750iL, it didn't even have a hood.

Speaking of advancements in technology from the Reagan era, peep the ultra-cool washers for the headlights. Certainly a relic from the past by today’s standards, but very cool nonetheless. 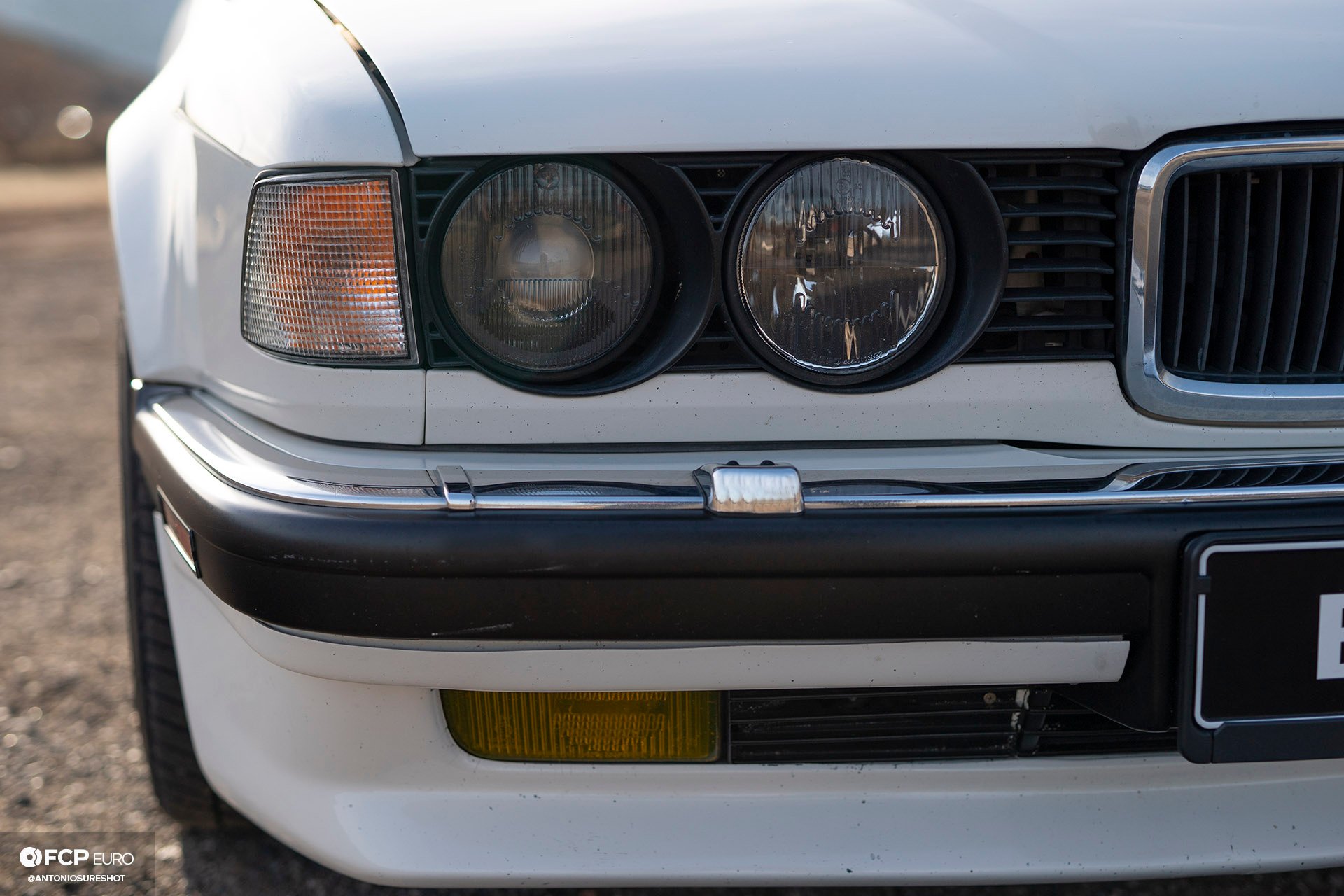 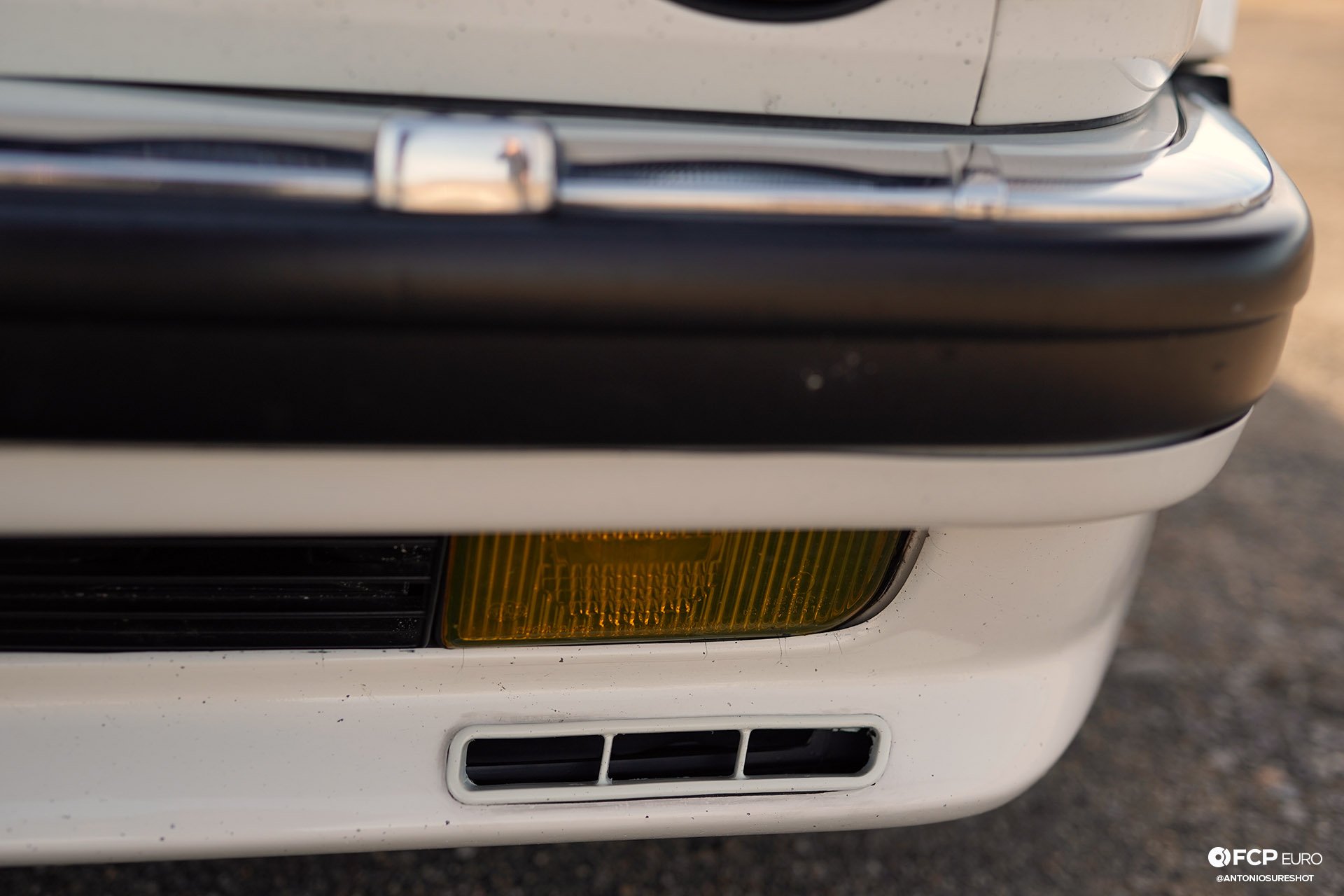 A custom vent cut into the AC Schnitzer front lip provides fresh ambient air to aid the 750iL’s breathing in addition to the amber fog lights.

Two things should immediately jump out at you right now if you’re a fan of second-generation seven-series sedans. First, check out the coveted Nardi wood grain steering wheel—a must for virtually any old-school BMW build. Second, why does that transmission shifter look so funny? Wait, that’s a manual transmission? We thought the 750iL only came with an automatic transmission… 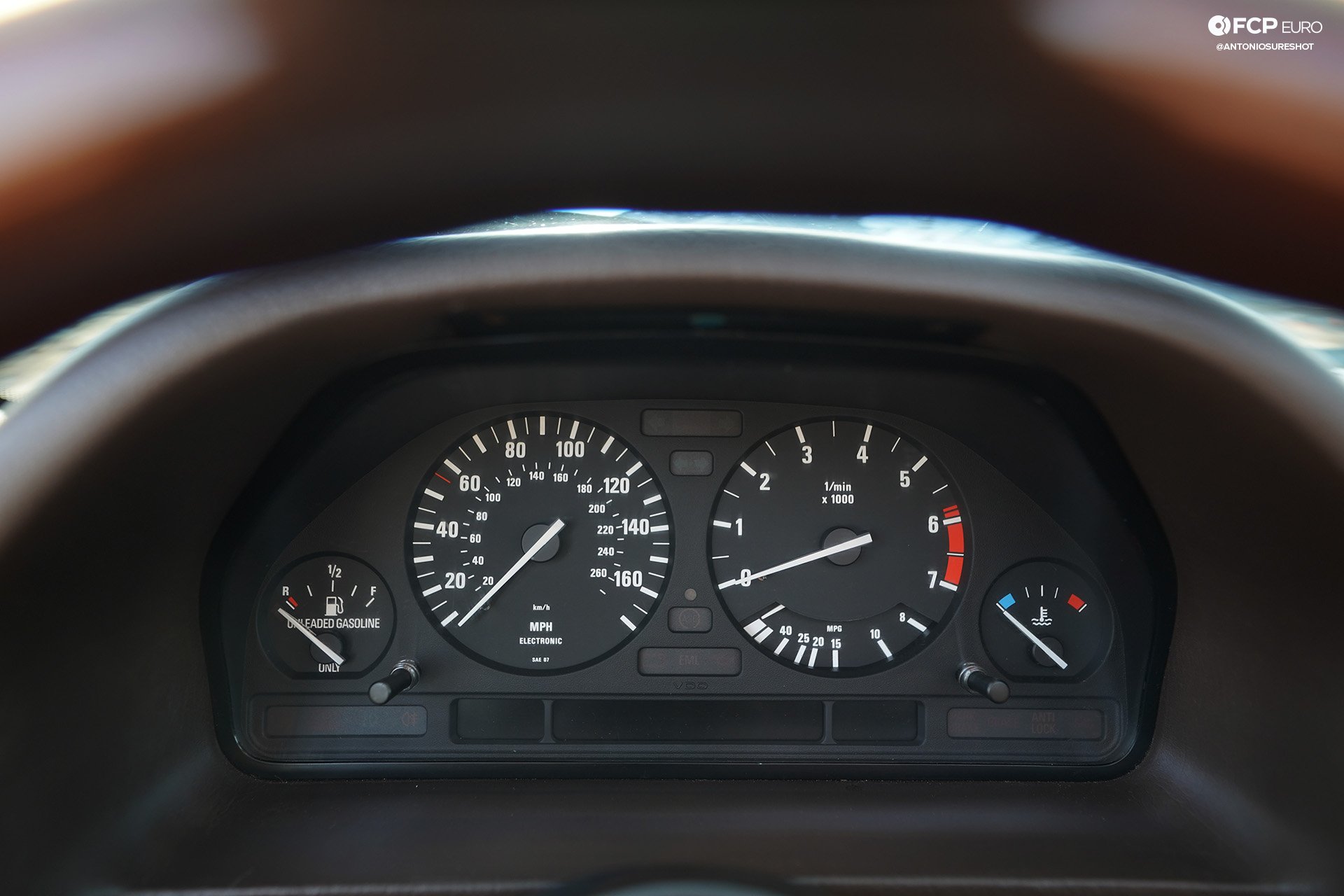 For a car that featured vastly futuristic advancements in technology, a simple, easy to comprehend gauge cluster using analog dials was truly appreciated. In our opinion, one thing that should never be cluttered is the gauge cluster, and for good reason. After all, it’s how you communicate with the ultimate driving machine, isn’t it? 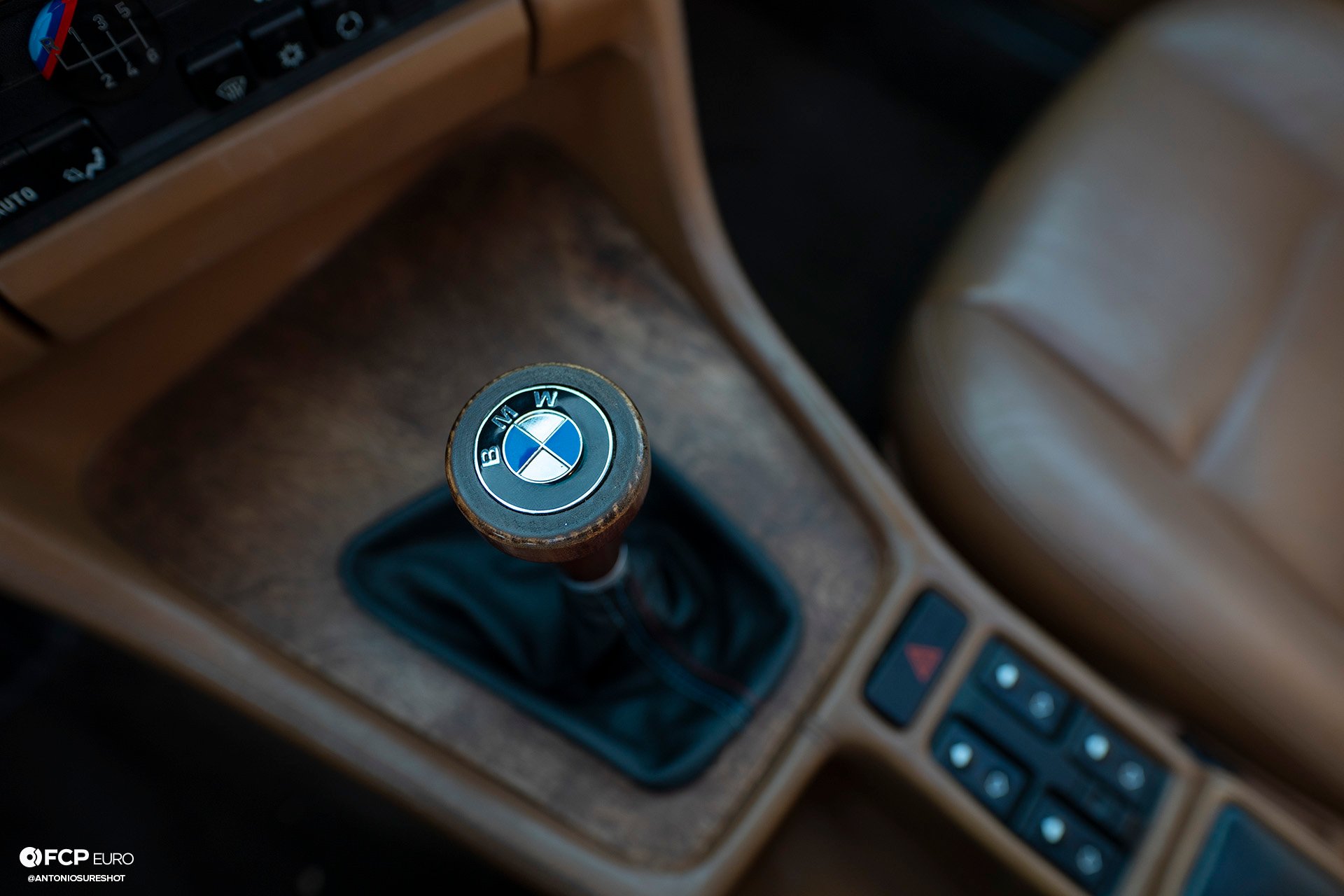 So, how exactly did a six-speed manual transmission find its way into Jordan’s E32 750iL, a car that was originally only offered with an automatic transmission?

Funny you should ask. Jordan says the original plan was to keep the car stock, though after a few tasteful modifications, he realized he had grown extremely tired of the slushbox four-speed automatic transmission.

"I was originally going to just fix the car and sell it, but after driving it, I decided to keep it," Jordan explained.

"The more I drove the car, the more I enjoyed it. I got to the point where I realized that this car would be perfect for me if it had a manual transmission instead of the sluggish four-speed automatic one. I looked online to see if others had done this and could not find any one. Despite this, I did my research and was determined to have a six-speed manual swapped 750iL."

Jordan opted for a Getrag 420G six-speed manual transmission which was used as an OEM transmission solution for BMW. The new transmission relies on a Clutchmasters FX250 clutch and PMC lightweight flywheel to transfer power to rearend.

The E32 750iL offered an abundance of standard features for the time, such as heated front seats, electronically adjustable front seats and a full leather interior, just to name a few. Jordan’s interior features wood-finished trim paired with a quite-rare brown leather interior. The color reminds us of those butterscotch candies your grandmother gave you as a kid, and we’re not mad about it. 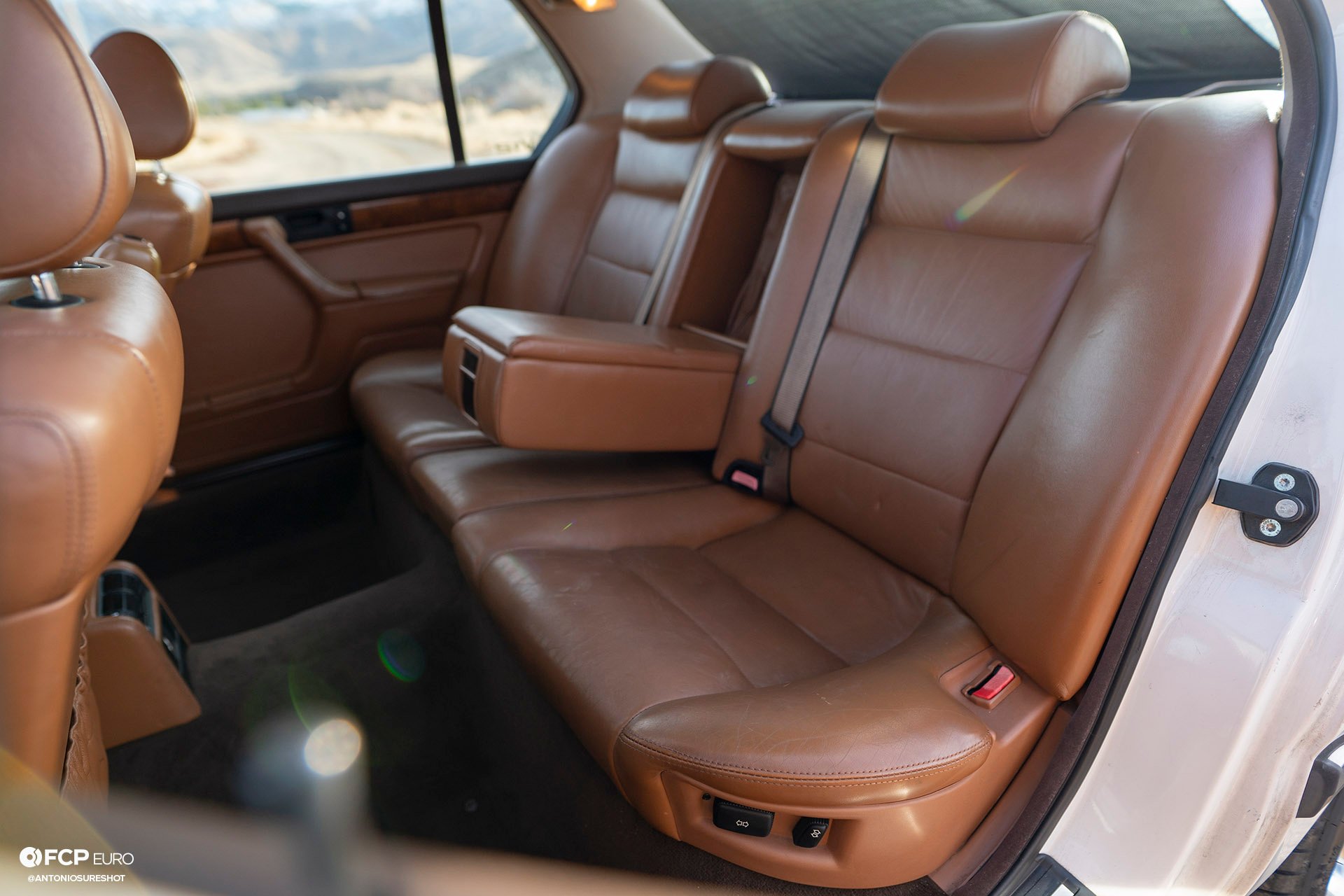 For its time, this car just continues to impress us. See those buttons located on the bottom of the rear seats? They allow for electronic rear-seat adjustment and heating, standard on all 750iL models from the factory. Another fun fact about the car—the radio controls for rear passengers were exclusive to the 750iL only. 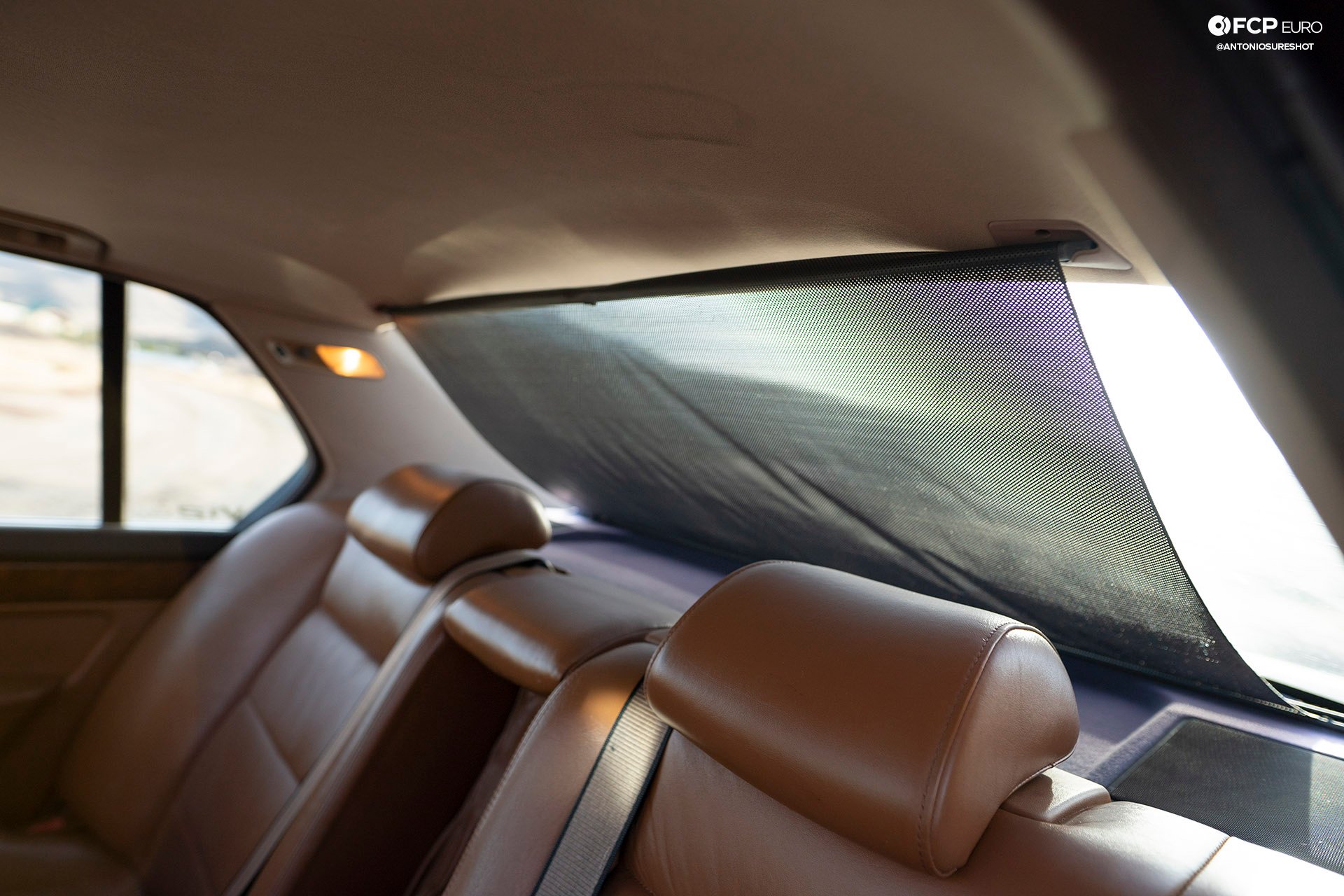 A rear window shade not only protects rear passengers from sun exposure on hot and sunny days, but also adds a little extra flare that ultra-clean VIP cars are known for. Sometimes, form and function can coexist. Who knew? 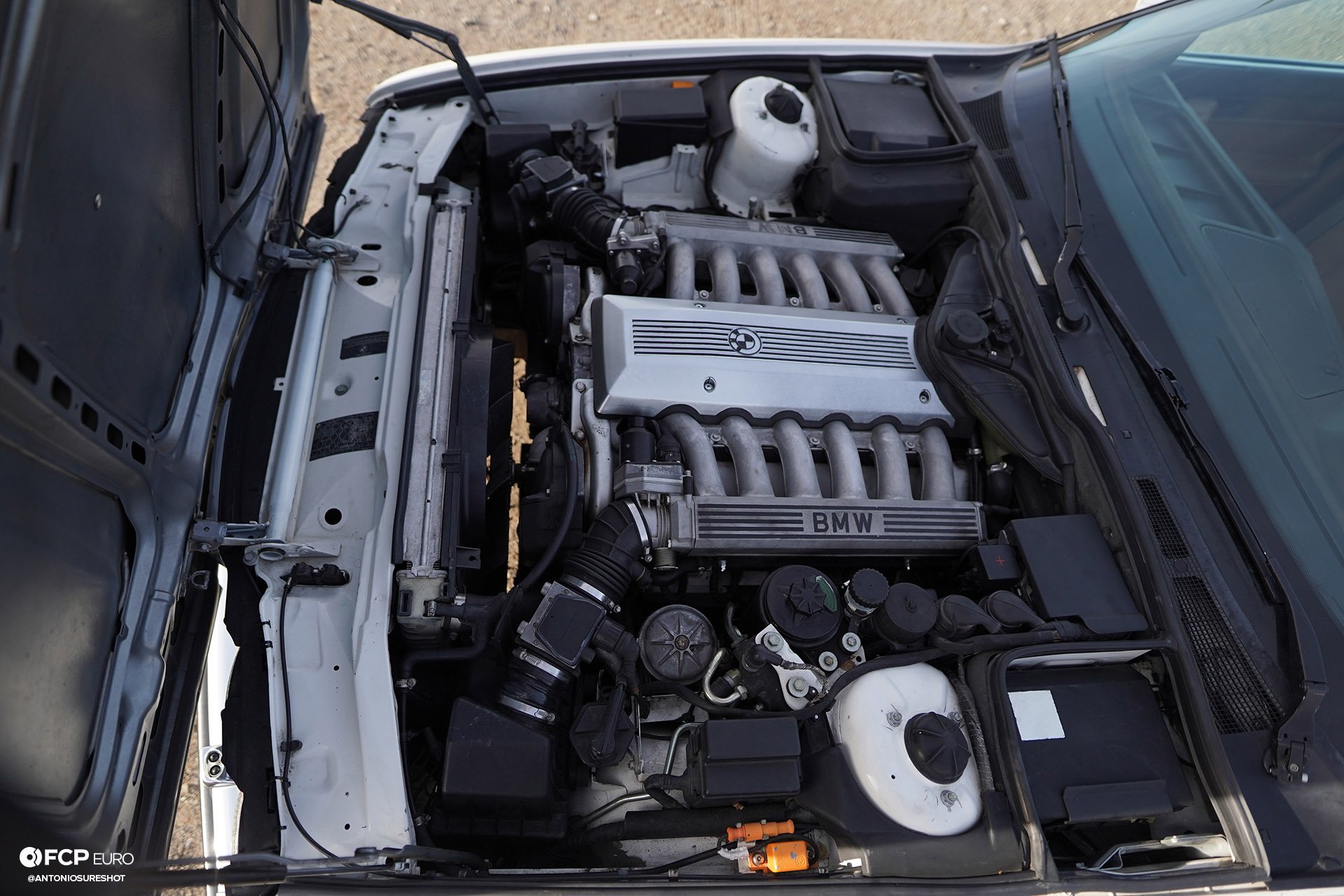 Ah, the infamous BMW M70 V12 engine. There were many firsts for BMW when it came to the 750iL. For starters, not only was it the company’s first ever long-wheelbase platform; it was also the first car BMW ever sold with a V12 engine under its hood. For that reason, the 750iL was also the first ever (you’re probably noticing a pattern here) BMW to offer an early form of traction control dubbed Automatic Stability Control (ASC).

The M70 played a key role in paving the way for future V12 offerings found in later BMW models as well. The M70 SOHC 24-valve V12 engine produced a respectable-for-the-time 300 horsepower and 332 lb-ft of torque, and Jordan says, it’s plenty of power to move his 4,000lb luxury sedan around town and on the occasional spirited driving session, thanks to the newfound six-speed manual transmission, a Wokke chipset, and a tune. 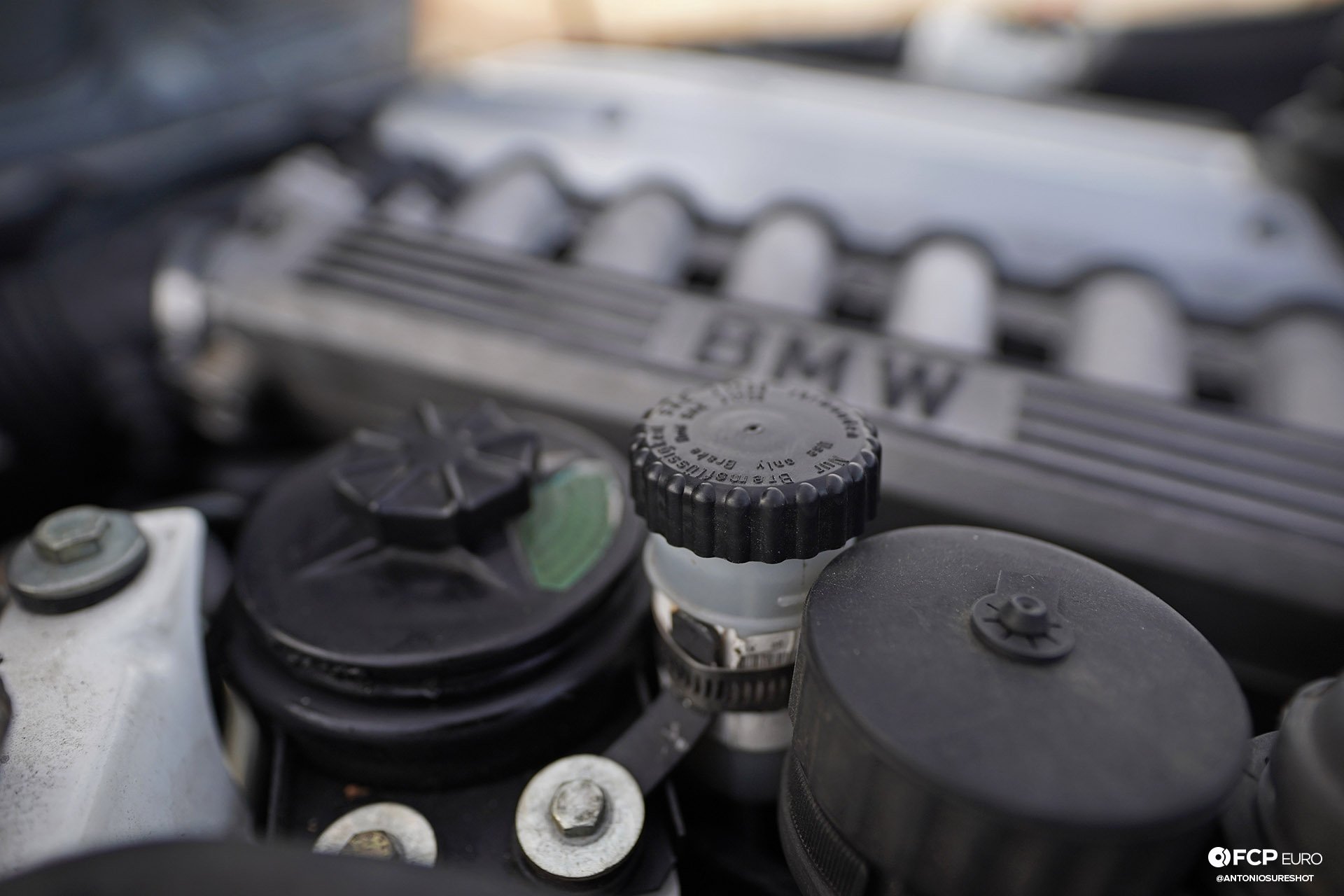 In a sea of fluid reservoirs under the hood of Jordan’s 750iL, one particular component, quite literally, sticks out above the rest. That part would be the now necessary clutch master cylinder fluid reservoir which uses brake fluid pressurized through a feed line to hydraulically actuate the clutch assembly.

Like all of the other OEM components Jordan has purchased, the all-new clutch master cylinder came from FCP Euro as well.

Jordan says the swap entailed a ton of custom work in order to make the six-speed manual conversion possible, as he doesn't own a fancy shop or have tons of money.

"Much of the work done was out in the cold with just my brother and I. Many things had to be modified, fabricated, and redone until right," he shared.

"I don't baby the car, and it is exposed to all sorts of elements. The fact that I was able to finish this car in a timely manner and daily drive it like I intended to do so is incredible. To build something I enjoy and drive everyday was worth all the struggling and money invested into the project." 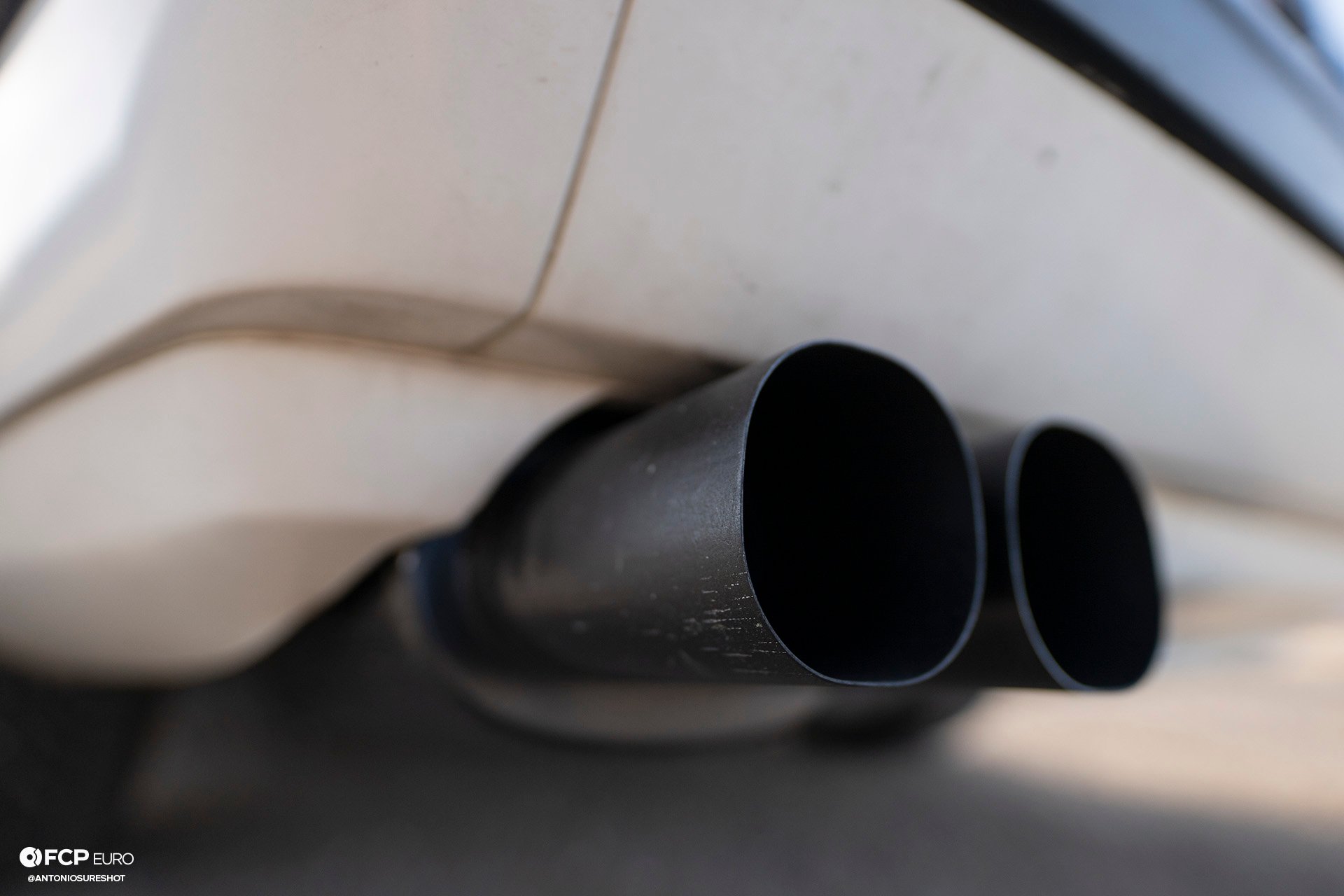 Jordan opted for a custom high-flow exhaust to really open up the throatiness of the factory V12.

Another fun fact: Square tips are one way to visually identify that this is a 750iL, as the lower seven-series sedans do not come with square tips. 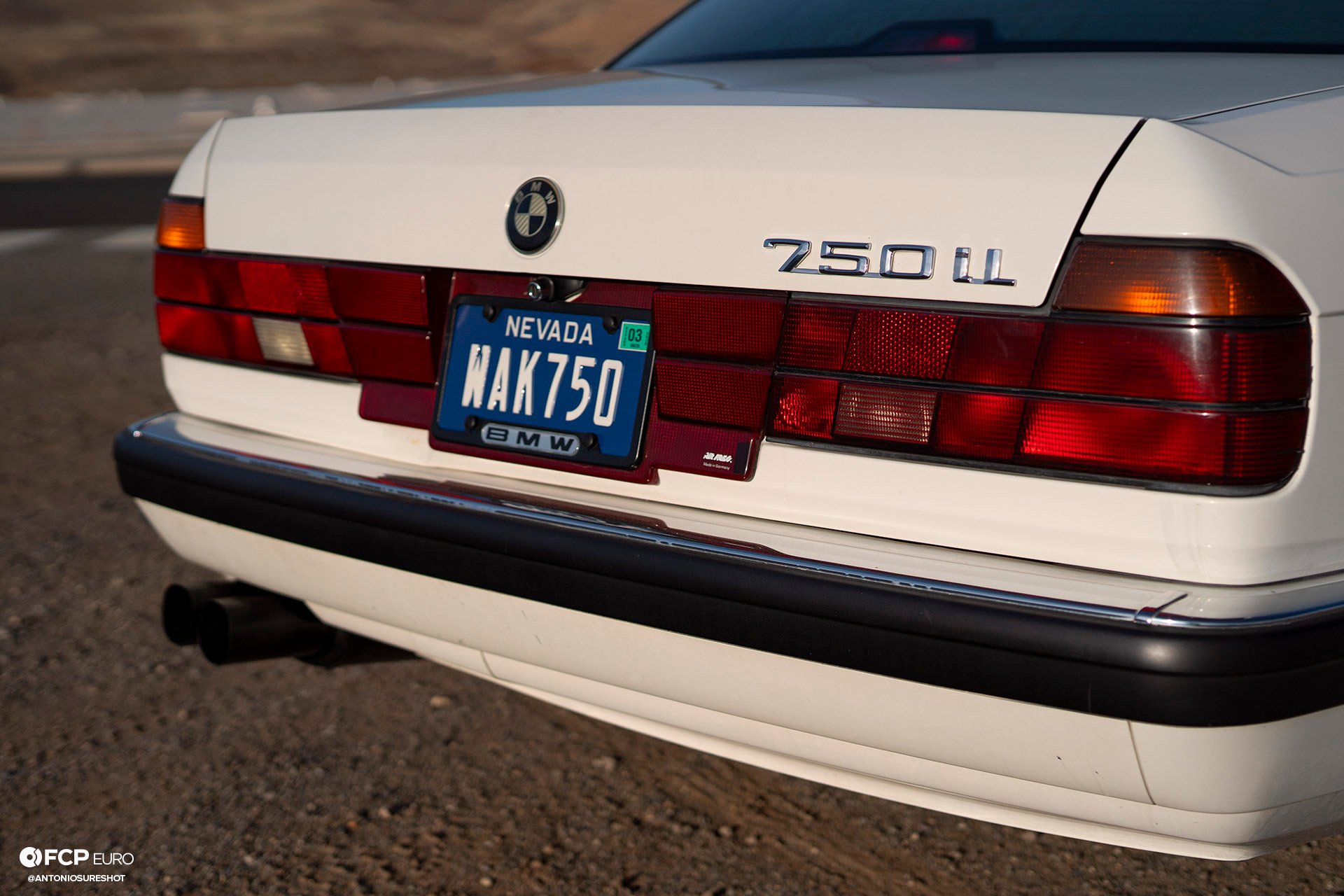 Notice anything different about Jordan's 750iL? You should. For starters, all U.S. seven-series sedans featured a painted body-panel behind the license plate. Jordan’s, however, is rocking a super rare heckblende by Airpress. And yes, it's the period correct one made in Germany.

For the second-generation seven-series, BMW introduces the first L-shaped tail lights on the E32. The tail lights were designed with safety in mind for following traffic.

It’s obvious Jordan is a loyal fan of BMWs as evident by his manual-swapped 750iL in addition to his previous 740i.

"It's very rare in America to see anyone really modify an E32, especially the 750iL," he enthused.

"Many people go for a sportier chassis such as an E30 or E34. But to have a long wheelbase V12-powered luxury sedan that rips through gears and is a blast to drive has been a dream come true. This car never existed in manual, so the fact that I've created something you can't just buy is what I like most about it."

The stance comes together thanks to H&R Sport lowering springs, Bilstein Sport shocks and M-Tech swaybars; a gold-standard combination for any well-handling BMW, no doubt.

Don’t mind the blown tail light bulb in the photo; Jordan has informed us that he just ordered a new one from FCP Euro.

What was originally destined for a quick return on investment has blossomed into what could potentially be the world's first manual transmission swapped 750iL. As Jordan continued to drive the car, he quickly realized the potential the platform had, and was determined to have a manual-swapped 750iL, no matter the cost. Jordan is eager to continue perfecting the car even further with plans of a heavy restoration in order to make the car as clean as possible.

For a car that originally set him back $400, we'd say Jordan's 750iL has transformed into one incredible ride. Keep on rockin' in the free world, Jordan. 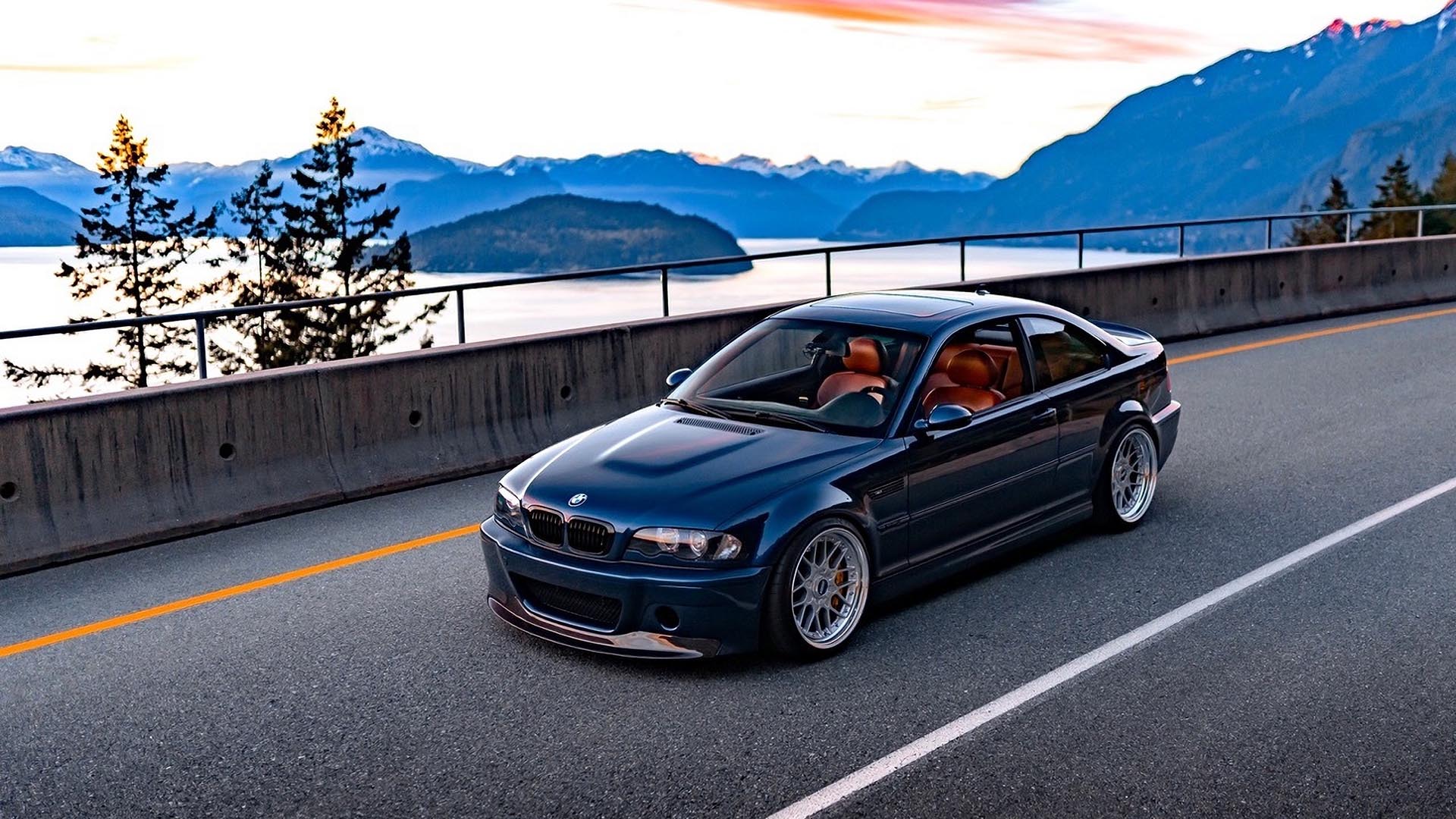 Buying a BMW E30 is an exciting experience. They’re light, quick, fun, and timelessly styled. If you get one that’s in good shape, and you take care of it, they’re also reliable. 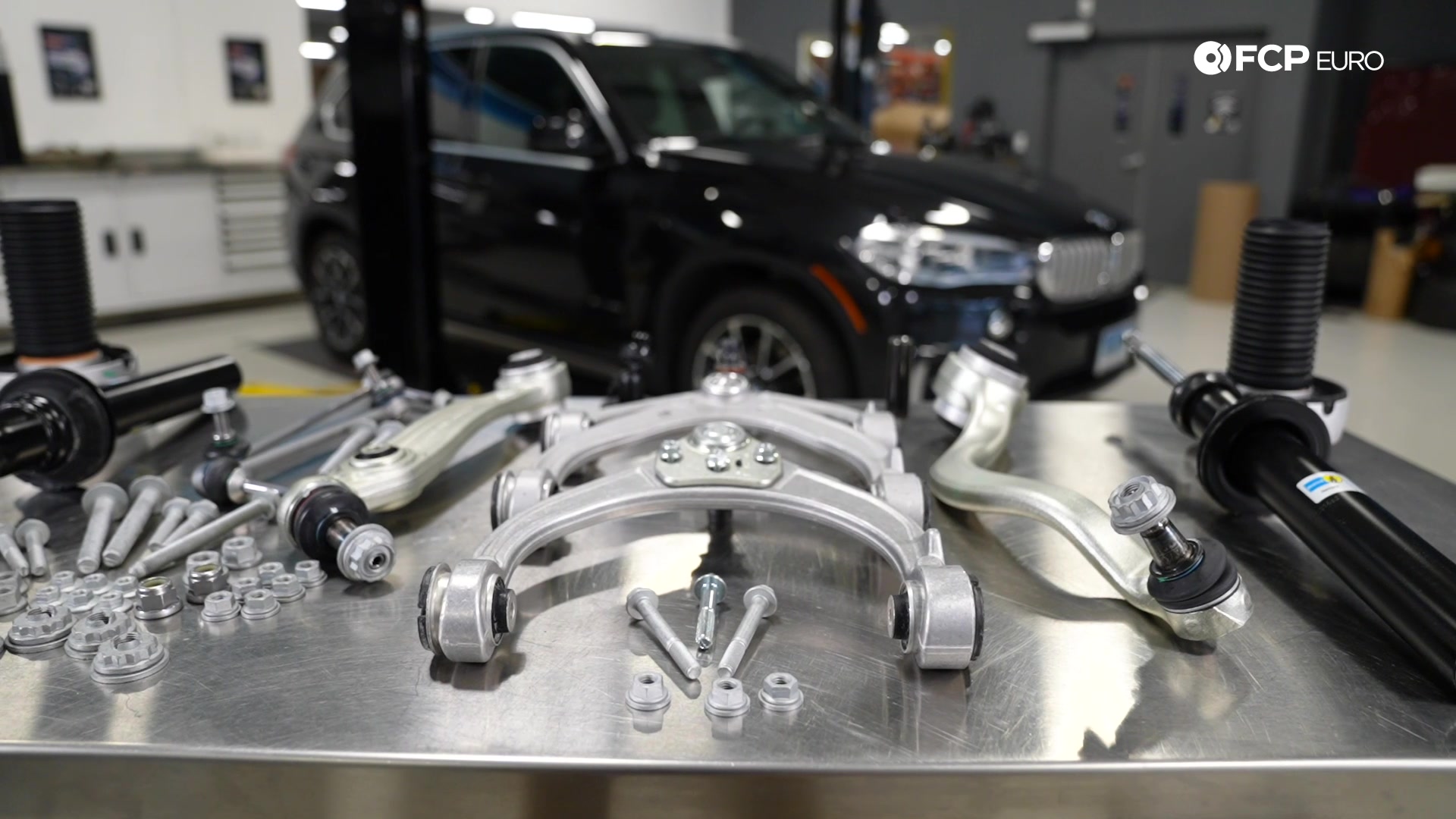 The BMW X5 & X6 F15 & F16 came with a multitude of suspension & brake options. Deciphering what they are & what they do isn't easy, so we've broken it down for you.