Abnormal vibrations while shifting and accelerating could be the sign of failing engine mounts. Failed engine mounts can result in much more than just vibrations - they often allow the engine to twist and contact other things in the engine bay, resulting in either broken cooling system components or pinched electrical wires. In severe cases transmission case damage can occur since the transmission will flex and twist with the engine. When experiencing the symptoms of failed motor mounts it's best to replace them as soon as possible, it's too cheap of a repair to put off.

While it's recommended to replace the original rubber mounts every 50,000 miles anyways, some of us need visual proof. If you open the hood and look low on both sides of the engine you'll notice a metal link with a spacer at the end; this spacer is the engine mount. Take a good look at the spacer with a flashlight, if you notice any cracking happening on the body of the spacer or if it appears to be squished it needs replacing.

That is all there is to it. It's much too simple of a replacement to put off; putting it off can only result in the damage of other parts and sloppy driving manners. 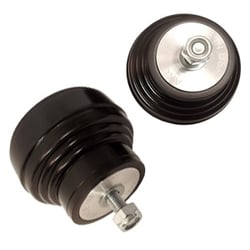 There are plenty of aftermarket mounts available for the more performance-minded enthusiast. However, there are some things to consider first. The stock engine mounts use a soft rubber material that absorb some of the vibrations induced from idling and general operation of the engine. The use of this material ensures that a minimal amount of these vibrations are transferred through the chassis.

Performance engine mounts can be made from a few different materials, the most popular being polyurethane and aluminum. When you switch to these performance based mounts you gain the performance aspect of the mount, but lose some of the characteristics that make it functional on a daily basis. What does this mean to the consumer? When switching to a harder material, rather than absorbing vibrations, it will transfer more of the vibrations of the engine to the whole vehicle. Using a harder material fixes some issues you would encounter in a racing situation, such as a slight reduction in power and immediacy from movement on the rubber mounts. Also, getting rid of drivetrain slop can prevent shifting failure because it reduces or eliminates driveline movement. But, switching to a hard polyurethane or aluminum solid mount can literally shake your bones. If your car never sees more than normal city driving conditions, I recommend staying with OE replacement mounts. 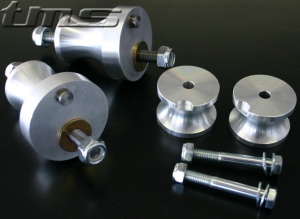