This BMW E39 M5 oozes performance done the right way. The first step for Martin Gonzales, VP of MotoIQ, was to get this 2003 BMW M5 and begin modding to turn it up from a ten to an eleven.

First, a disclaimer. My journalist beginnings started at MotoIQ, where I worked with Martin back in 2011. Since then, I have gone on to work with other publications and even start my own. I can say with pride that I’m thankful of Martin, Mike Kojima, and Jeff Naeyaert as they gave me the chance to start this journey into automotive journalism and content creation and it’s an honor to be able to write about their BMW E39 M5 project car. At least as it sits right now. 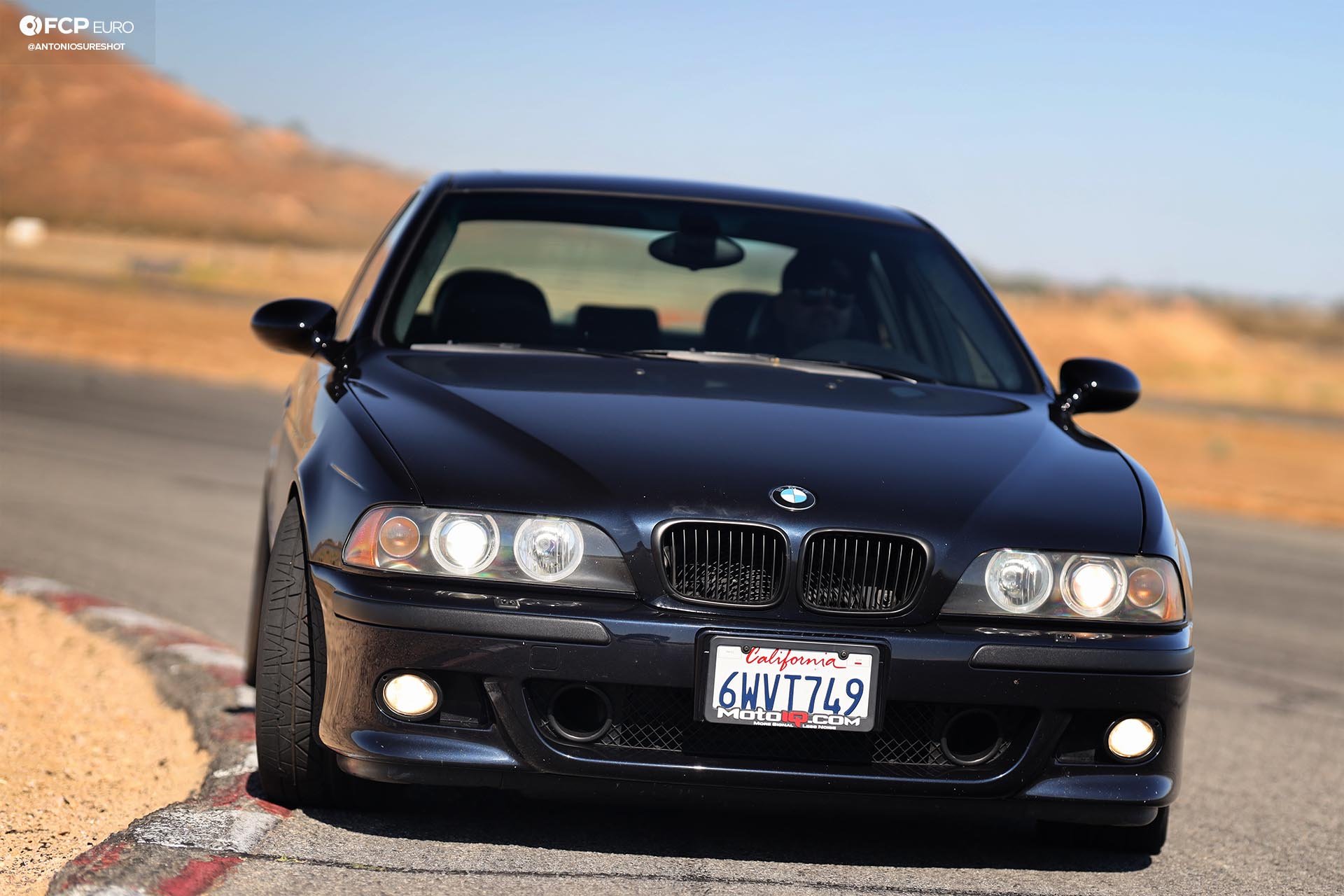 Back in February of 2014, Martin was touring a performance shop owned by Daniel Wennerberg with his publication and found a beautiful 2003 BMW E39 M5 sitting on one of his lifts. It turns out Daniel had originally purchased this car to replace another E39 he had, just that version was a wagon, and he wanted a performance car. Unfortunately for Daniel–and fortunately for Martin–Daniel’s wife was adamantly against this M5 as she saw it as “another gas guzzling” vehicle. A drive to lunch and a few calls later, Martin purchased this car from Daniel and “Project E39 M5” was born. 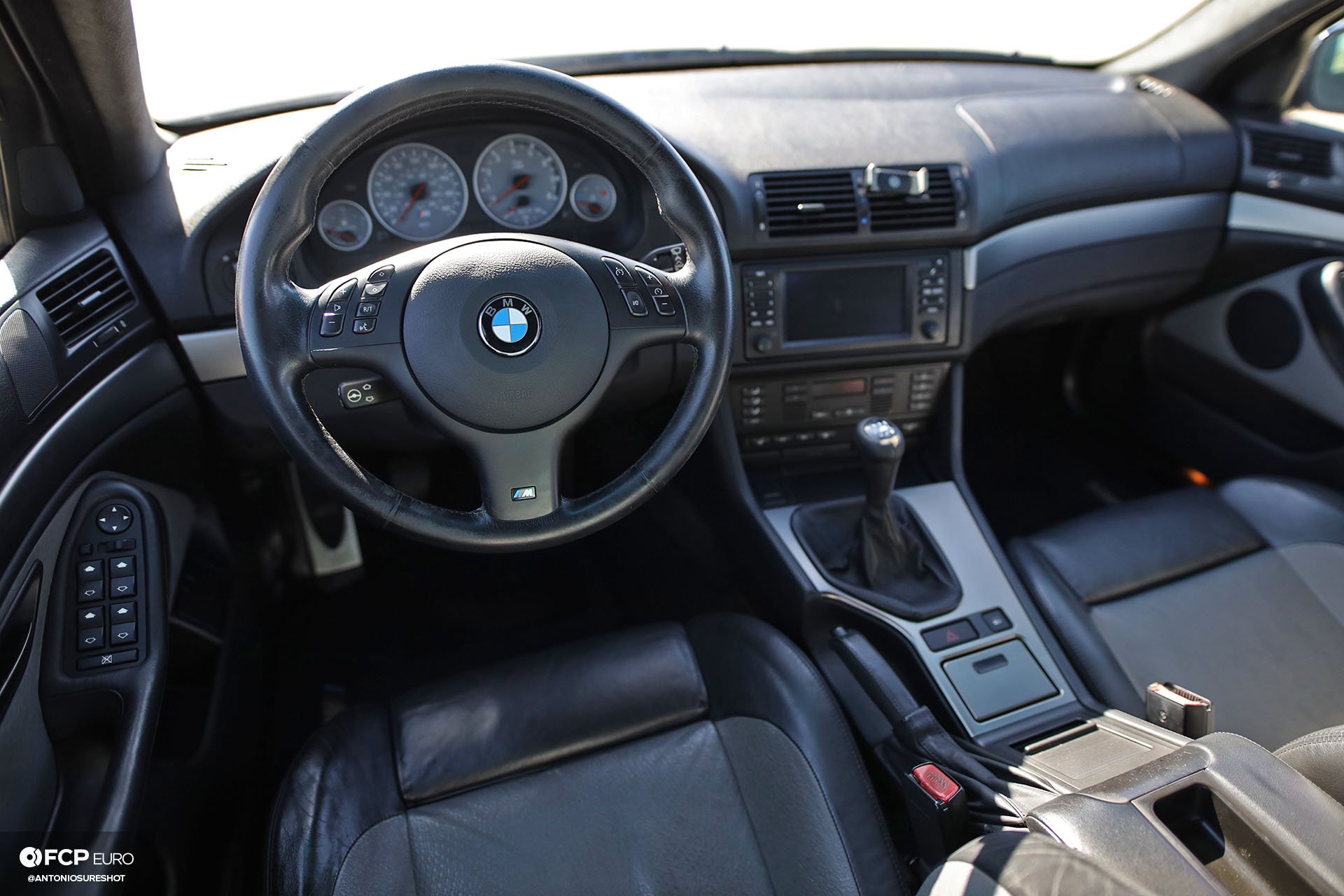 What makes this car perfect in the eyes of Martin was that it was a driver’s car first before being a luxury car. “You would be hard pressed to find another sedan with the balance of performance, styling, luxury, and practicality of the E39 M5,” he explains. 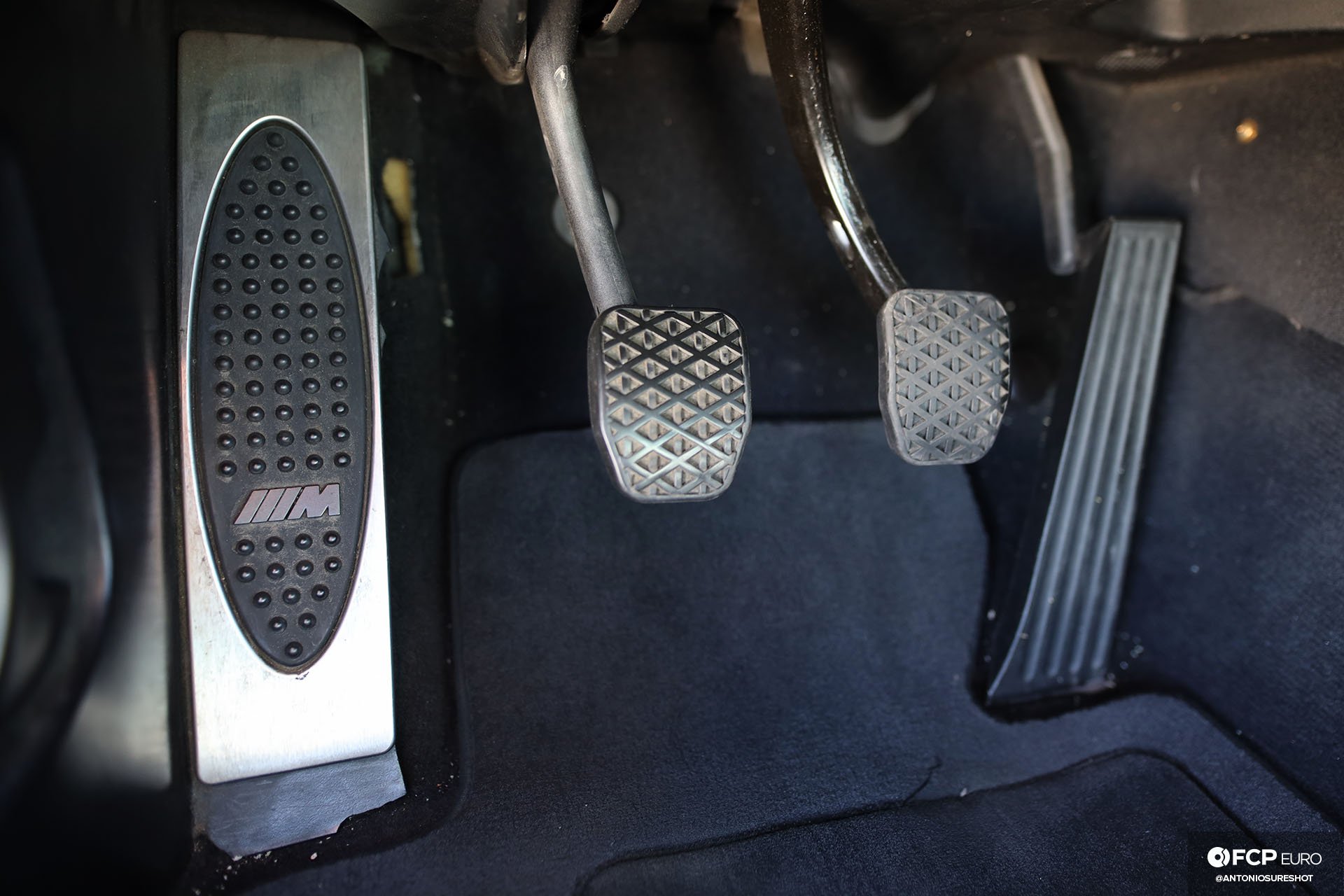 As you can tell from the three pedals in this sporty sedan, “it is a driver’s car without a bunch of electronic aids. The DSC button actually works and turns off all traction control." Martin continues to explain, "This thing has cup holders just so BMW could say it had them because they are completely useless. You don’t drink or eat anything while you’re in this car. It is meant to be driven.” 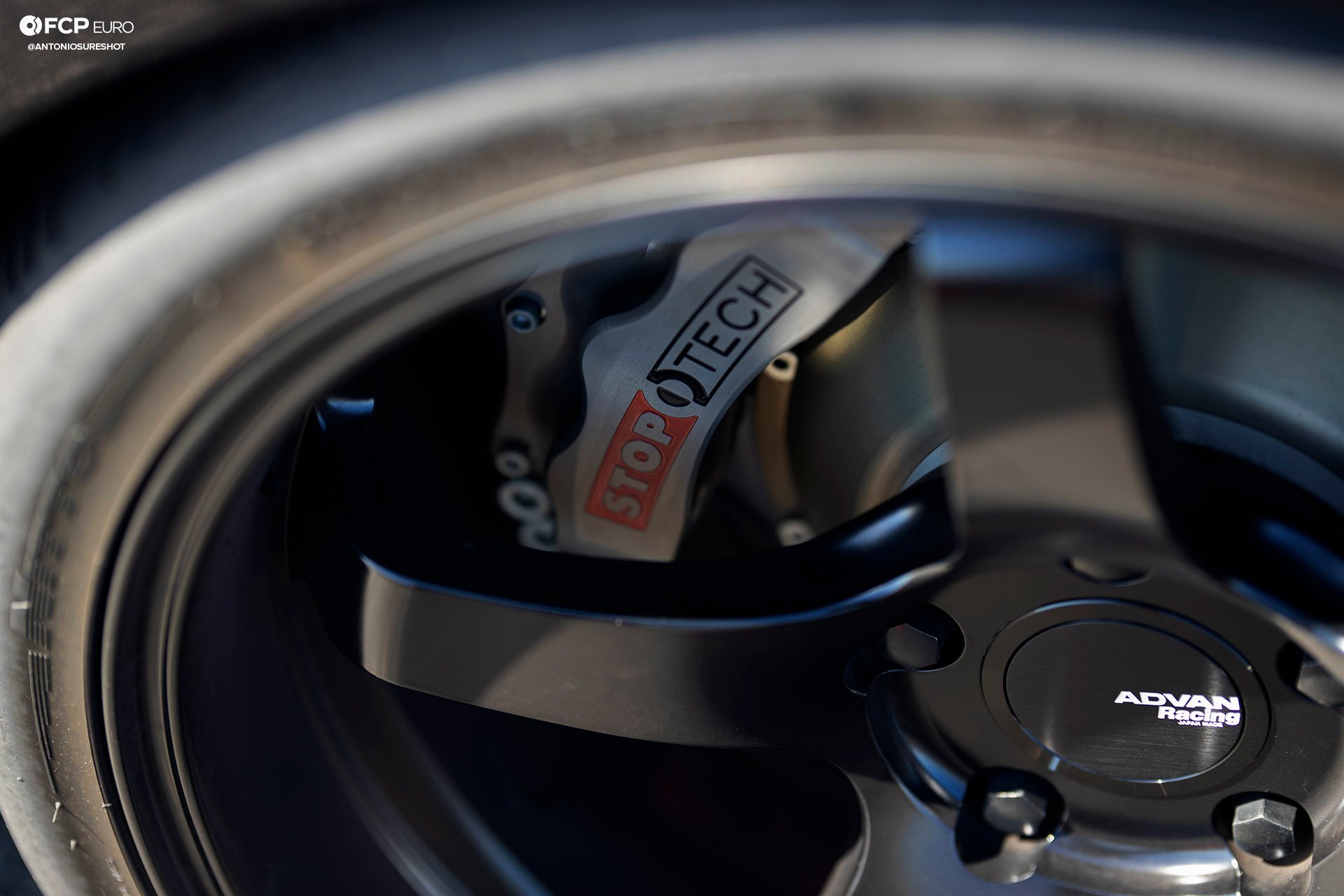 Reading that, you know that upgrades stared immediately, and the first parts changed out were the brakes. After a spirited pace up a 40-mile winding section of Highway 18 to Bear Mountain, he noticed brake fade and rotor shimmy. Inititially, they used StopTech’s Sport brake kit but have since upgraded to their Trophy Kit. This is a big-brake kit that includes the six-piston ST60 caliper for the front while the rear is a four-piston ST40 caliper.

The rotors are a two-piece design called the AeroRotors, which allows for some weight reduction by using a 7075-alloy aluminum rotor hat and an iron alloy, slotted-face rotor. This switch netted about 8-pounds under the stock BMW rotors, each, while also gaining 10mm in outside diameter (345mm x 32mm is the stock size while the AeroRotors here are 355mm x 32mm) for the front. For the rear, the gain was 28mm in diameter, 12mm in thickness, and only a 4.5-pound weight gain. If the entire rear rotor was this size but cast iron, it would be far heavier. What’s also convenient is that the rear rotor hats retain the drum for the parking brake, making this a significant upgrade without losing an important OEM part.

These are also a floating design and have about 0.012-inch of movement between the hat and rotor. This allows the rotors to remain flat, transmit less noise, and allow braking components to last longer. This movement also allows the rotors to center better with the fixed-mount caliper design of the ST60/ST40 calipers. For a reduction in compliance by the stock rubber brake hoses, a set of stainless steel StopTech SS lines was included in the Trophy Kit.

These guys also work closely with KW Suspension, and this means that the BMW M5 was upgraded to the Variant 3 coilovers. The V3s feature individual rebound and compression damping as well as ride-height adjustability. This allowed Martin to dial in how firm the ride is while also allowing for better corner weight balance, better weight transfer while accelerating and braking and changing settings to suit track conditions when he goes out to a track day. Yes, this car is put through its paces while still being a luxury car and is part of what separates Martin's from most other M5s. 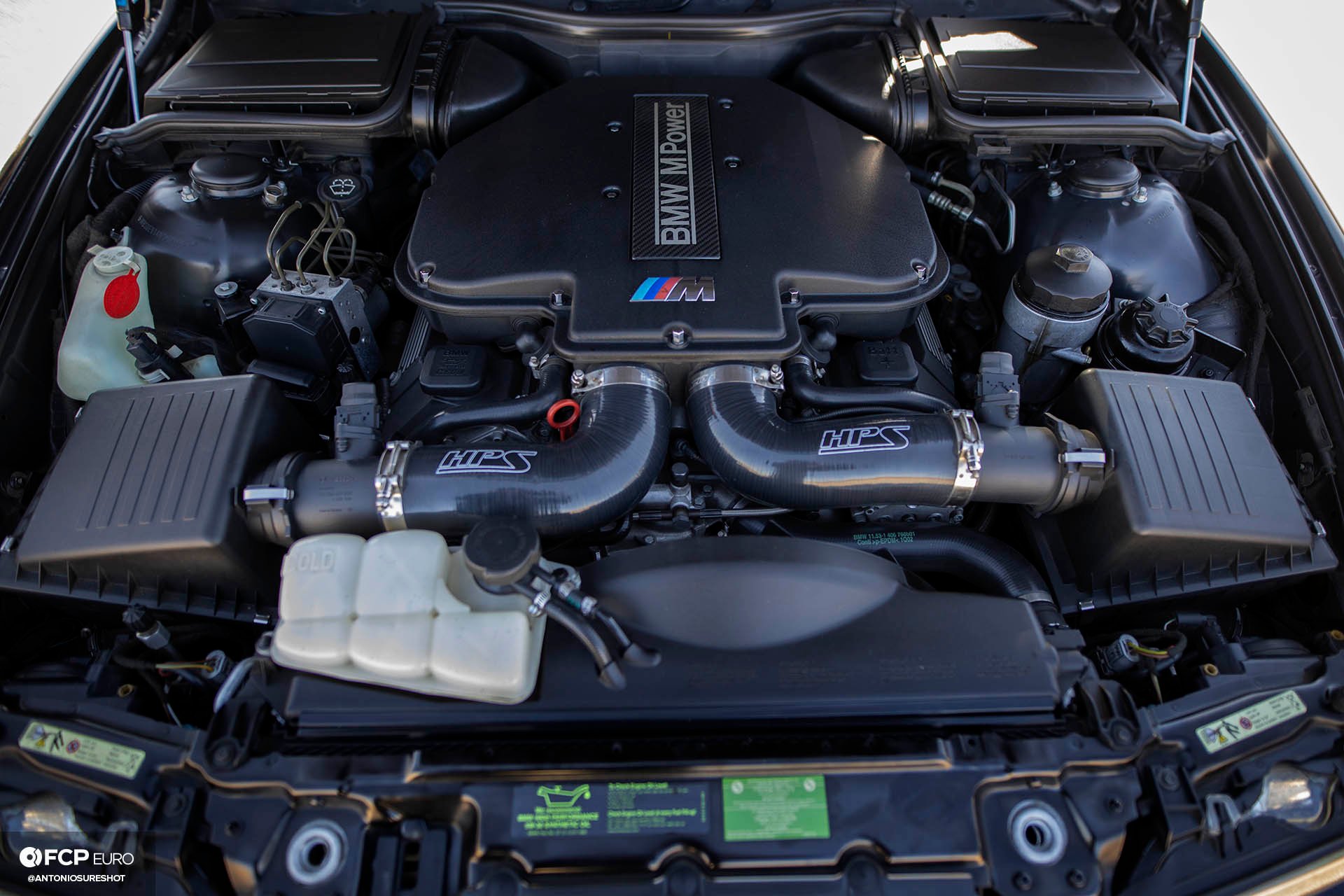 The engine is still the S62 it was equipped with from the factory. However, with the aid of some HPS Performance intake elbows, a K&N drop-in filter, a Deatschwerks DW300 fuel pump, and Corsa Performance’s Cat-Back Exhaust Kit with Black Pro-Series Tips, it works and sounds better than it did from the factory. The biggest help is that the Mass Air Flow (MAF) sensor and air filter boxes don’t get heat soaked as bad as stock.

This reduces power loss due to hard driving and repetitive dyno runs. This also means that, despite its age and mileage, the 4.9-liter V8 pumps out 303-horsepower at 6600-RPM and 282 lb-ft of torque at 3800-RPM to the wheels on California’s weak 91-octane fuel on their Superflow dyno. Yes, the original S62 was rated to 394-horsepower, but this is a crank rating that doesn’t take drivetrain losses into account nor age and engine wear. The fact Martin’s engine is putting out 303-horsepower with external parts, no internal work, and 16-years and 146-thousand-miles of use is impressive. 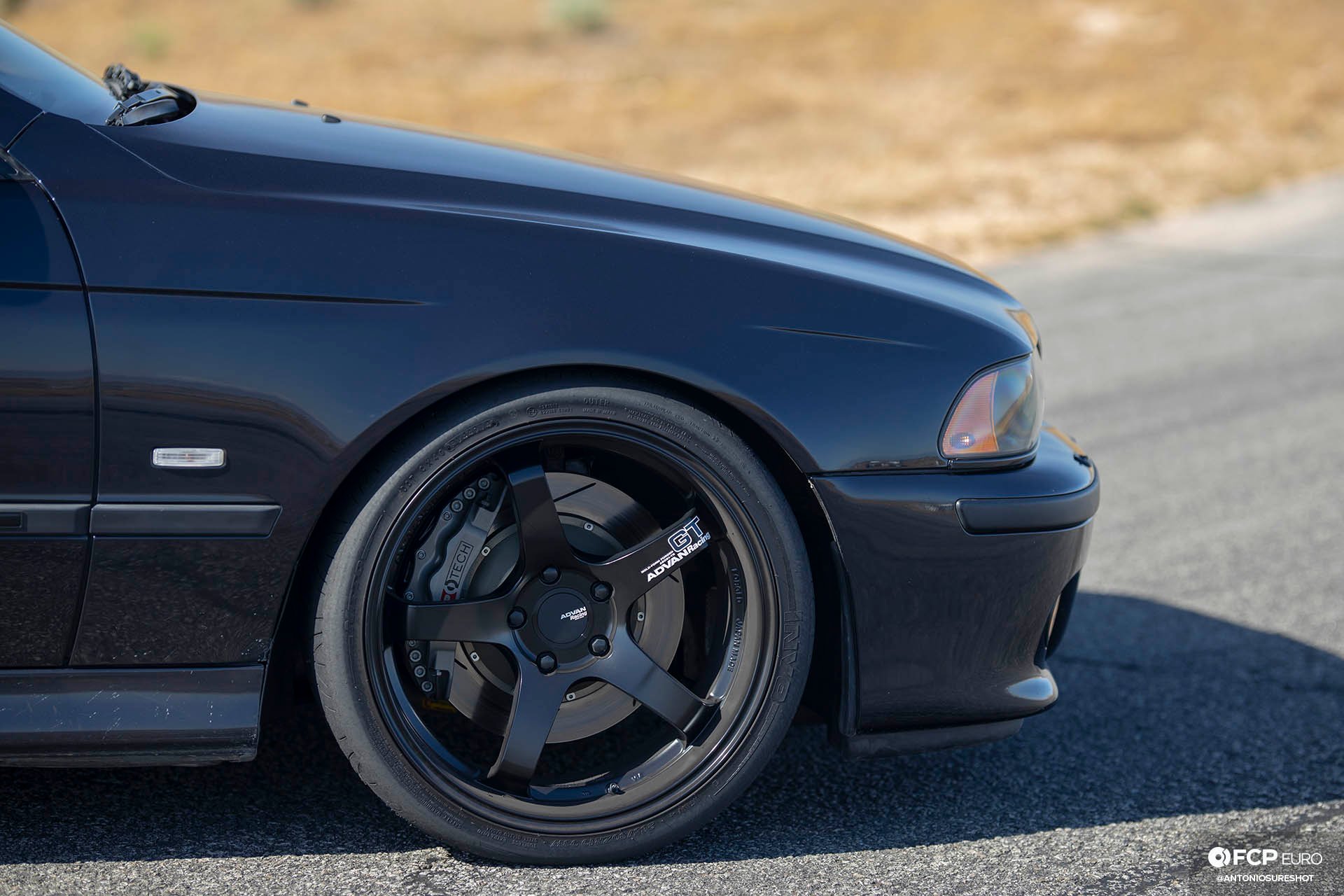 This combined with the Trophy brake kit also netted 17.5-pounds per front and 2.5-pounds per rear corner weight over the stock BMW wheels. Yes, this setup is lighter despite the Trophy rear kit being heavier than the OEM brakes. Also, this reduces rotational and unsprung weight, which means there are larger effective gains outside of overall vehicle weight. 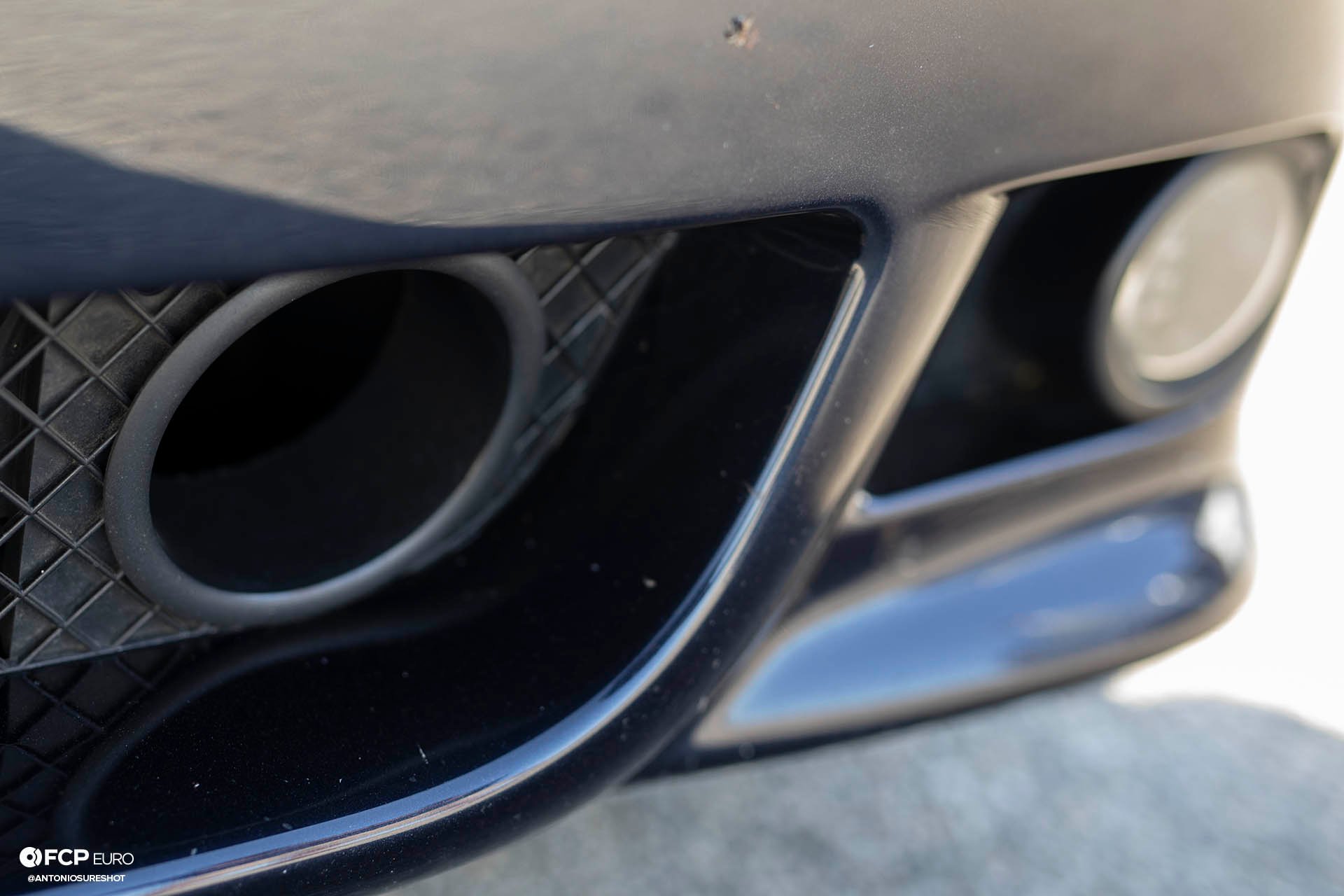 While the guys over at MotoIQ aren’t typically of the car show going type, they don’t slack on some aesthetics, provided it adds some additional functionality or just suits their style. The front grilles have been changed to black versions over the flashy chrome. The lower bumper grille is made by Slimbones and adds a pair of duct holes, to which a set of OE BMW 540i brake ducts and inner fender liners were also added. This forces cooler air from the front bumper to lead to the OE metal ducts that lead to the brake rotors. It was also part of the first upgrades done to the M5 when Martin installed the initial StopTech sport kit.

Nothing flashy but also nothing hacked to gain performance on Martin’s E39 M5. It’s a clean, relatively unassuming car that puts its gains where it counts. Though, that’s not entirely the end of the build. “After shaking the car down on track, we’ve been able to identify a few areas that need improvements, such as roll control, power steering cooling, and general engine cooling improvements.” 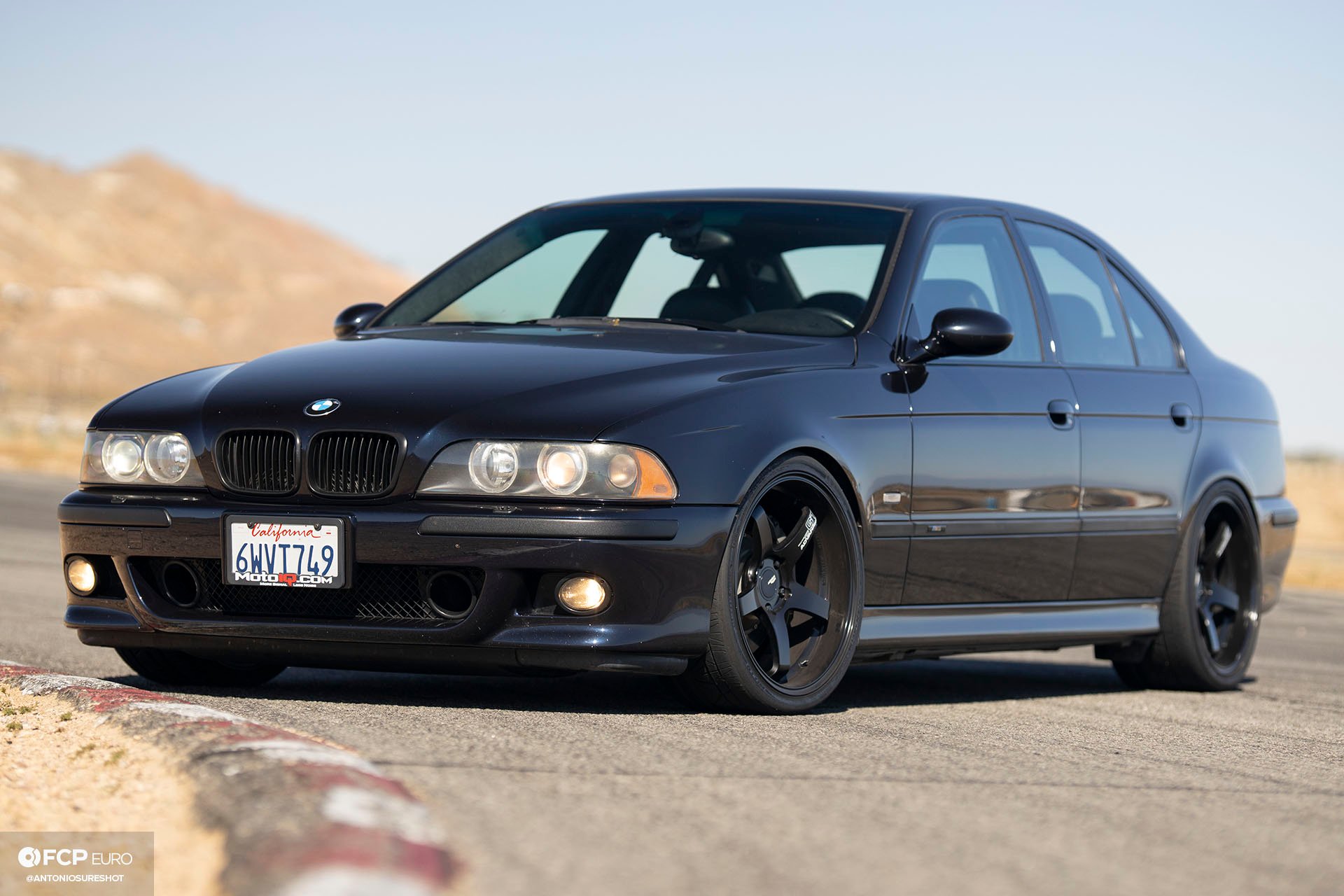 Most of the parts you see will remain but will be upgraded as power increases, too. Even so, Martin is rather happy with the performance so far, “The E39 M5 is a very heavy car,” says Martin, “This tremendous weight puts a heavy demand on the suspension and brakes. We’ve been able to daily drive the car with complete comfort and beat it up on the track with no changes to the set-up. This says a lot about the KW and StopTech components!” 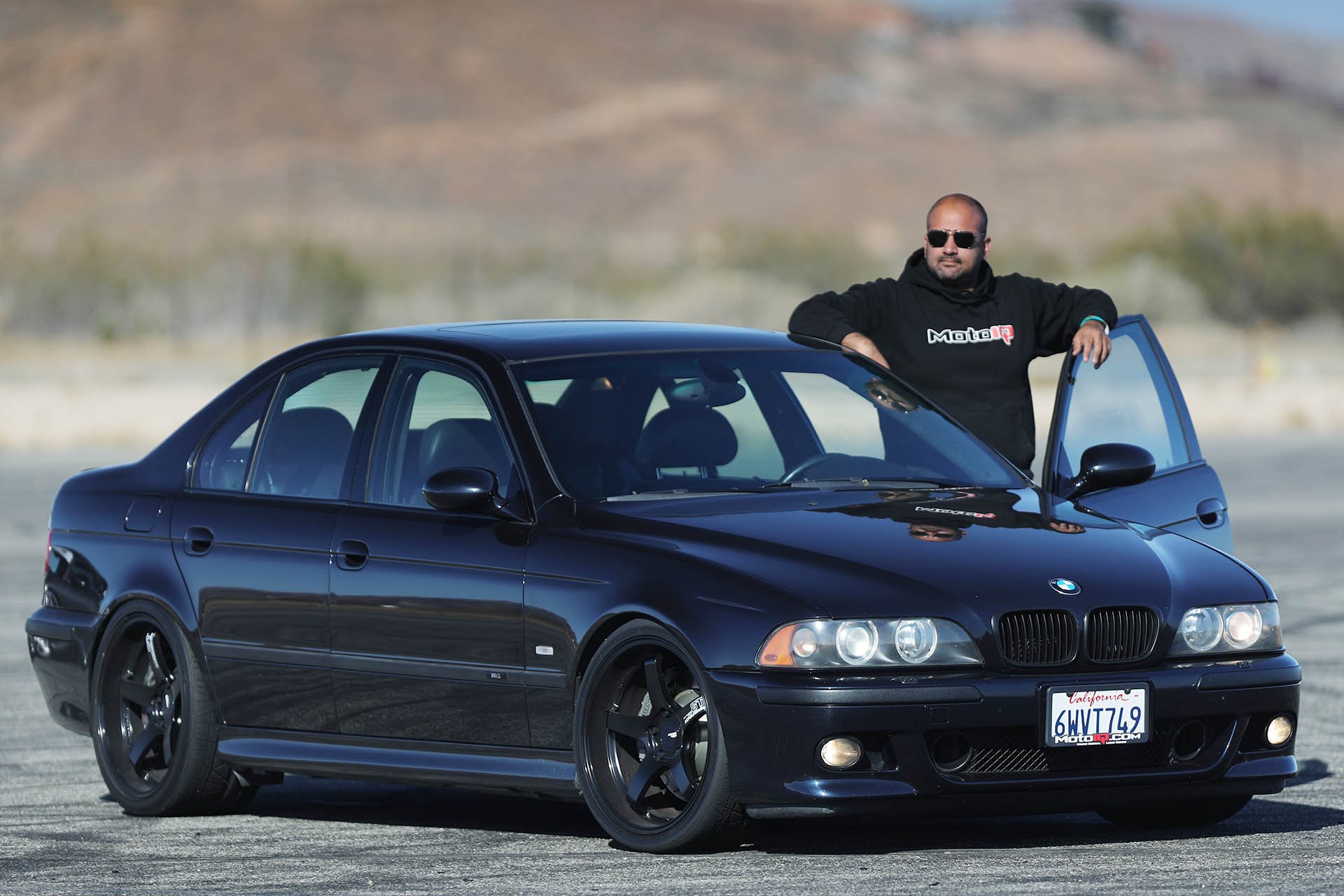 “We’ve outfitted the BMW E39 M5 with a few go-fast goodies already on our pursuit of making the ultimate performance sedan more ultimate-er.” Martin concludes, “We started with the basics and addressed controlling the two-tons of car by adding a set KW V3s and a StopTech Trophy kit on all four corners... it was known from the very beginning that it would become a project car for MotoIQ. Which means the goal would be to turn the performance up to 11!”

This means you will see more of this car in the future on their website. If you want to keep up with it, follow this link that will lead you to every article on this car and future articles on it.

If you like Martin's BMW E39 M5, you can find additional BMW-related content at bmw.fcpeuro.com, as well as more build features like this one, here. If there's anything specific you would like to see, or if you have any questions/comments, leave them in the comments section below.