Clean Diesel is Better Than Gas And Here's Why

One of the newest automotive concepts on the market is clean diesel. It's being used by Volkswagen, Audi, Mercedes, BMW, and even Chevrolet. It provides all the power and fuel economy a driver could ever want, while being cleaner than a comparable gas engine. So how do they do it?

The four stroke cycle of a diesel engine is similar to a gas engine, but no spark plugs

To understand how they make a diesel cleaner, we must first understand how a diesel engine works. In a gas engine, a spark ignites the fuel at a certain point of the rotation of the engine. Engine speed is controlled by air intake, fuel injection quantity and timing, and ignition timing. In a diesel engine, there is no ignition control by a spark – the glow plugs are only for cold starts. The fuel and air are compressed at such high pressures that they spontaneously combust, pushing the pistons down. Engine speed is mostly controlled by fuel injection timing and quantity. The high compression ratios (over 20:1) help heat the compressed air on its own enough to burn the fuel. 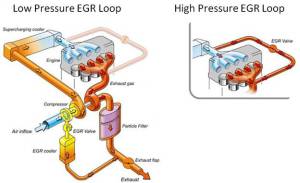 An EGR system on a TDI. Exhaust gases are fed directly back into the intake with fresh air when the butterfly valve closes in the exhaust

In a gas engine, emissions are controlled by catalytic converters, fuel/air ratios, and fuel vapor recovery systems. In a diesel, it's almost entirely done by exhaust after-treatment. There are multiple catalytic converters, and an EGR system that runs at a very high duty cycle, to completely burn all the energy left in the exhaust.

The major feature of newer diesels is the diesel exhaust fluid treatment. Essentially, urea is sprayed onto a catalytic converter with the exhaust, and through a series of chemical reactions, emissions are reduced dramatically. This system requires a topping off of the fluid (Volkswagen and Audi call it AdBlue) when needed, or an engine restart will be blocked.

Diesel exhaust is not just noxious gases like a gas engine. There is also a large amount of particulate matter, or soot, that comes out the tailpipe. The diesel particulate filter, or DPF, helps capture these particles, trapping them in a honeycomb style tube, similar to a catalytic converter. When the engine is hot, the soot is burned, and released as gases. The DPF is self cleaning, and cleans itself during long drive cycles, without any indications to the driver that it is cleaning itself. 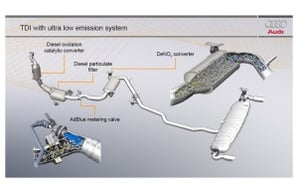 The exhaust system of a clean diesel. Note the particulate filter and AdBlue injector.

All new diesels use direct injection. Unlike a gas engine, diesel injectors are driven off the camshaft, and fuel pressures are much steeper, around 3000 bar. Diesels inject fuel at multiple points, and at different quantities, depending on engine load, EGR cycle, etc. 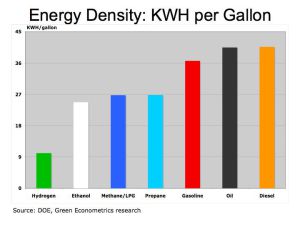 Energy density of common fuels - see how much higher diesel is than anything else?

The reason a diesel car gets such better gas mileage is due to a few things. Firstly, diesel simply contains more energy than gasoline. A gallon of diesel has roughly 13% more energy than a gallon of gasoline. Using higher compression ratios and a constant EGR helps to squeeze out every bit of energy in diesel, resulting in better gas mileage. The use of turbochargers also helps increase the efficiency of a diesel engine, without hurting the gas mileage as would happen in a gas engine.

When people ask me what their next car should be, I always tell them to buy a diesel. A properly maintained diesel will last almost forever, the higher cost of fuel is offset by the increased fuel economy, and resale value is phenomenal when compared to the gas-powered equivalent. Diesel is no longer a four letter word in America, and I am expecting to see a massive influx of diesels in the next decade.