It’s not often you find a modified BMW E28 in the wild. This 1986 535i caught our attention with its manual transmission, deep offset BBS wheels, and M60B40 V8 swap.

“I really wasn’t in the market for another car,” said Jeremy Whittle, owner of this handsome looking E28, “but I wanted to revisit the E28 chassis.” His first E28 build was a Euro 525e that also featured an engine swap, but he sold it in 2014. Jeremy always missed owning an E28, so he decided to purchase this 535i in late 2018 from a friend of his. 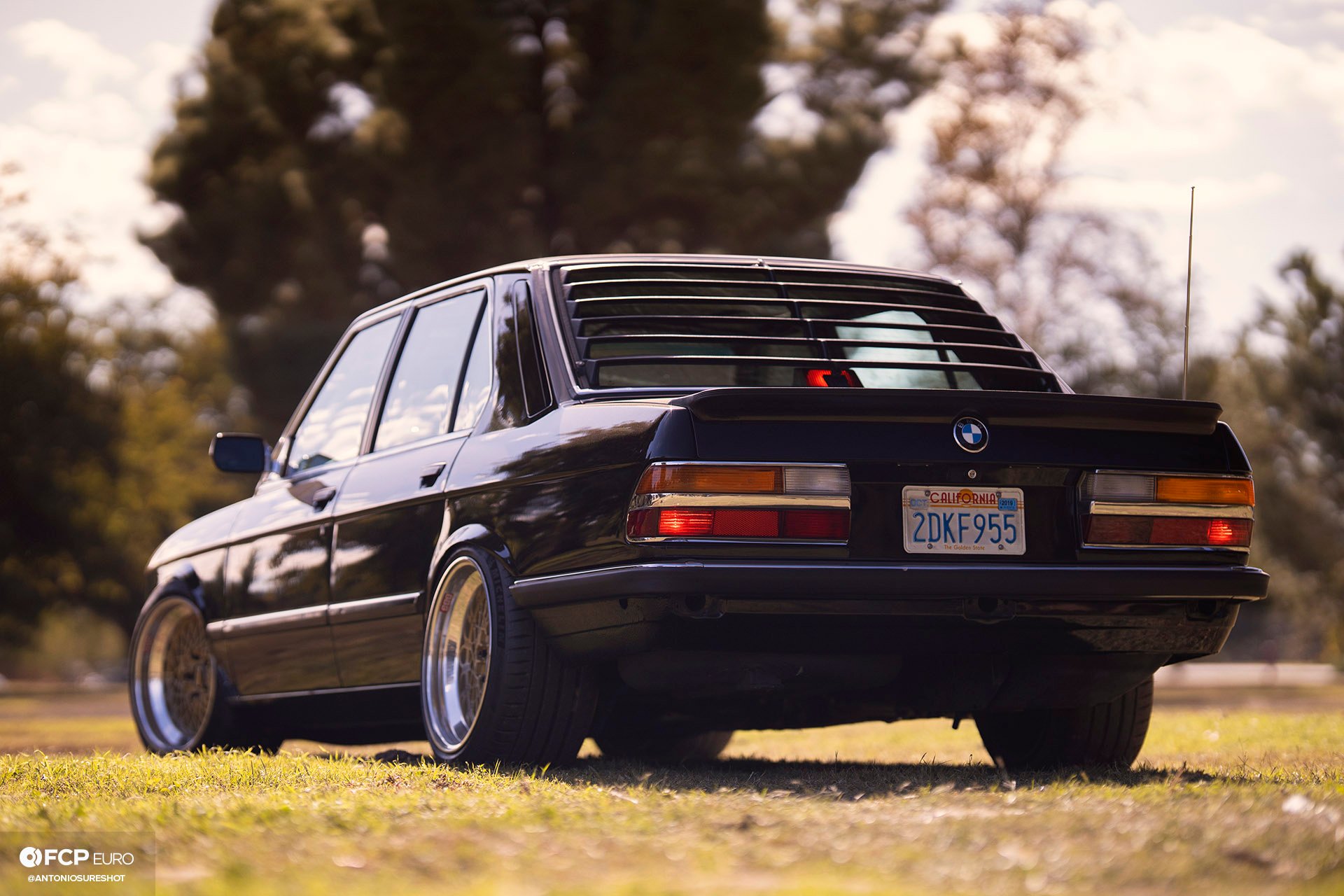 The car sat a good bit lower and rode a lot harder when Jeremy initially purchased it. While he probably would have enjoyed it when he was younger, Jeremy isn’t into scraping on road reflectors anymore. He purchased a set of taller springs that also allowed him to use a softer spring rate. It uses 450-lbs/inch in the front and 400-lbs/inch in the rear. “I tend to drive my cars hard,” Jeremy said, “It’s important to me that they perform at least as good as they look.” 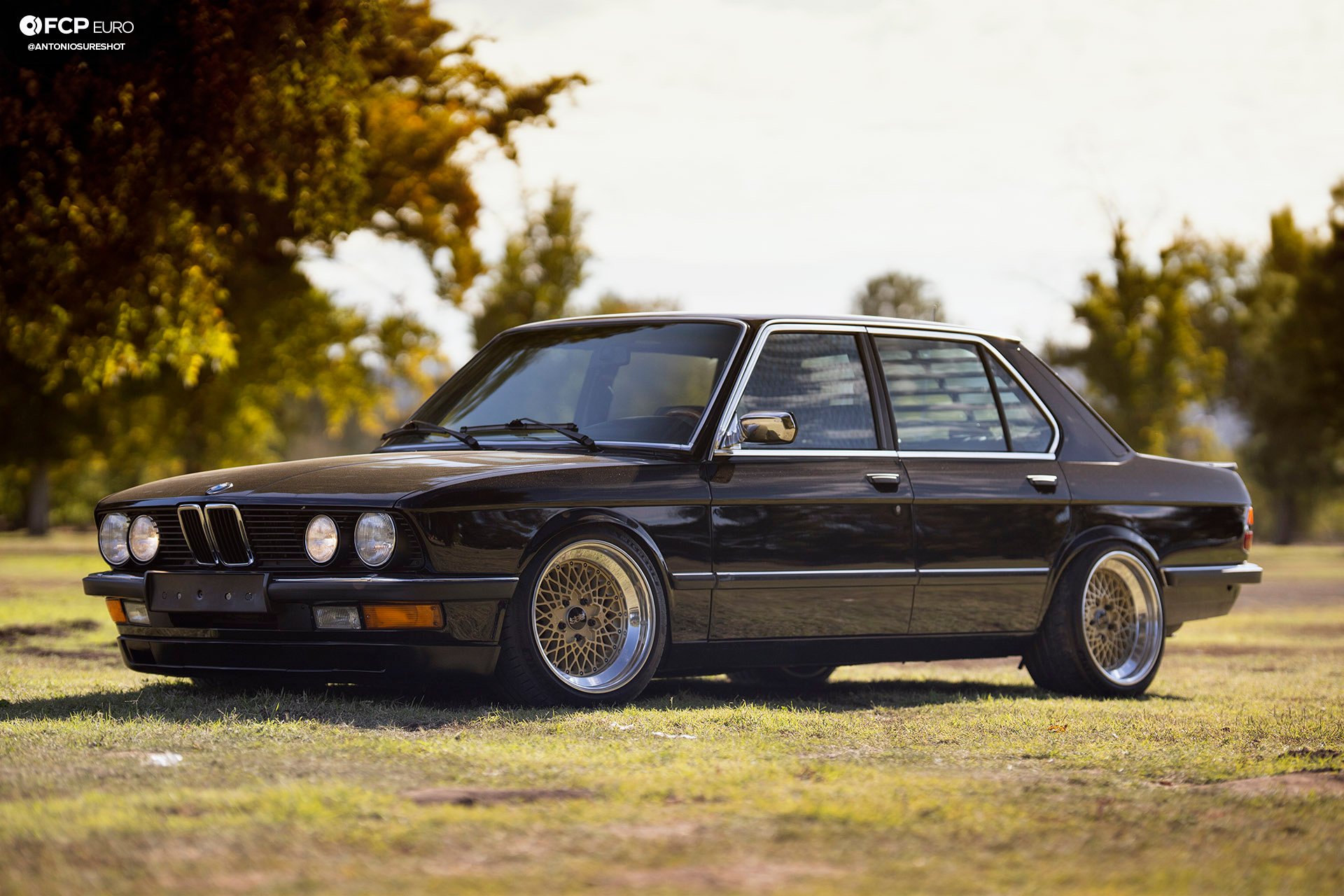 Instead of removing all of the factory chrome, Jeremy kept it, along with the conversion to the European front and rear bumpers. We'll talk about that a little further down. 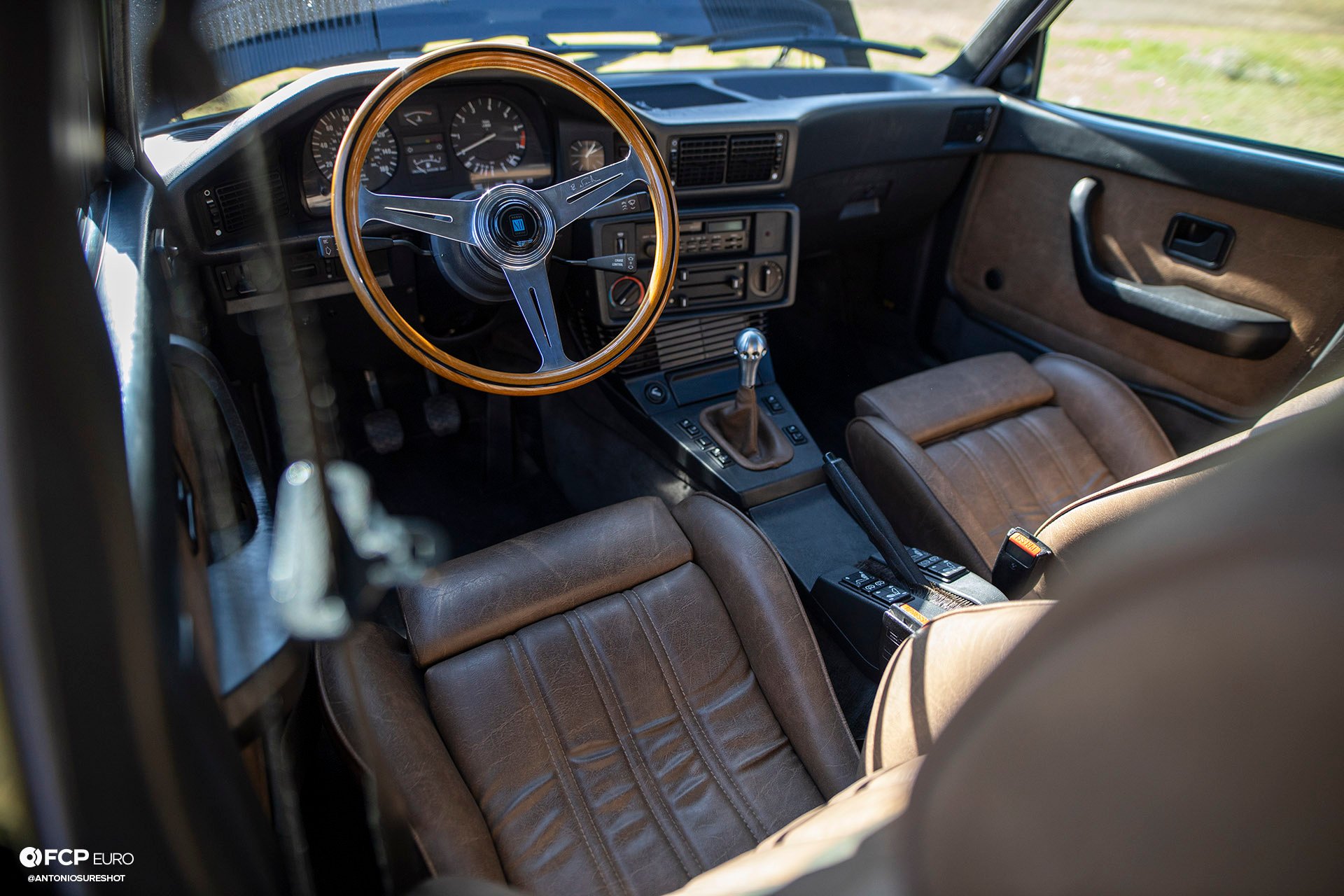 Inside, you’ll find some amazing leather-work done to the interior, including the inserts of the door cards. Everything done has given this 535i an upper class feel, like it was a 7-series. That’s because the Brown Buffalo leather was an option on the E23 7-series and the M6 of the same era as the E28. 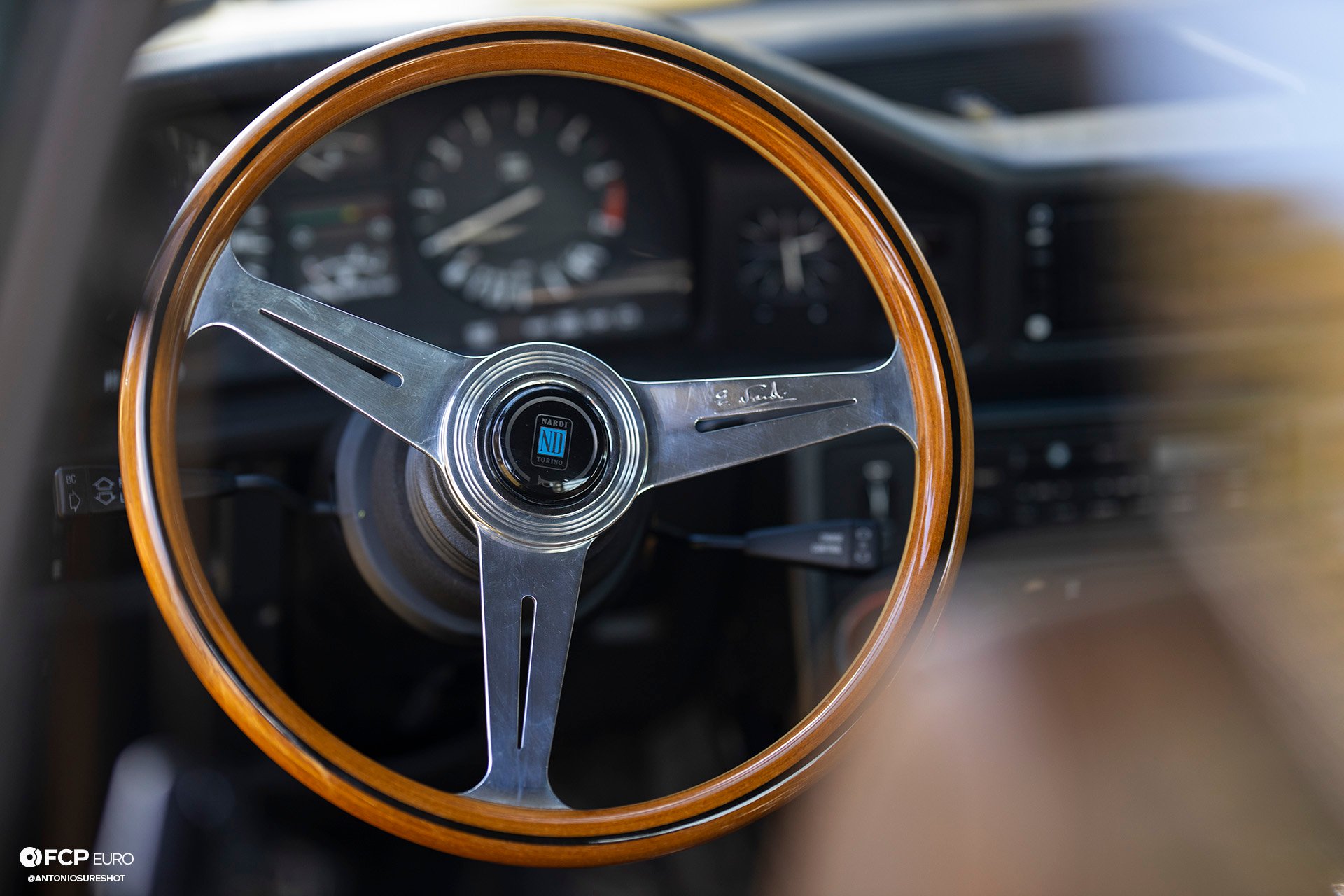 The Nardi Classic steering wheel is a staple of vintage and neo-classic cars, but this particular 360mm wooden wheel has a bit of sentimental value for Jeremy too. “My girlfriend Alie bought this as a gift for my birthday, and I had it on my previous E28 eight years ago,” he explained, “I held onto it when I sold that car, and now it’s made its way back onto this E28.” 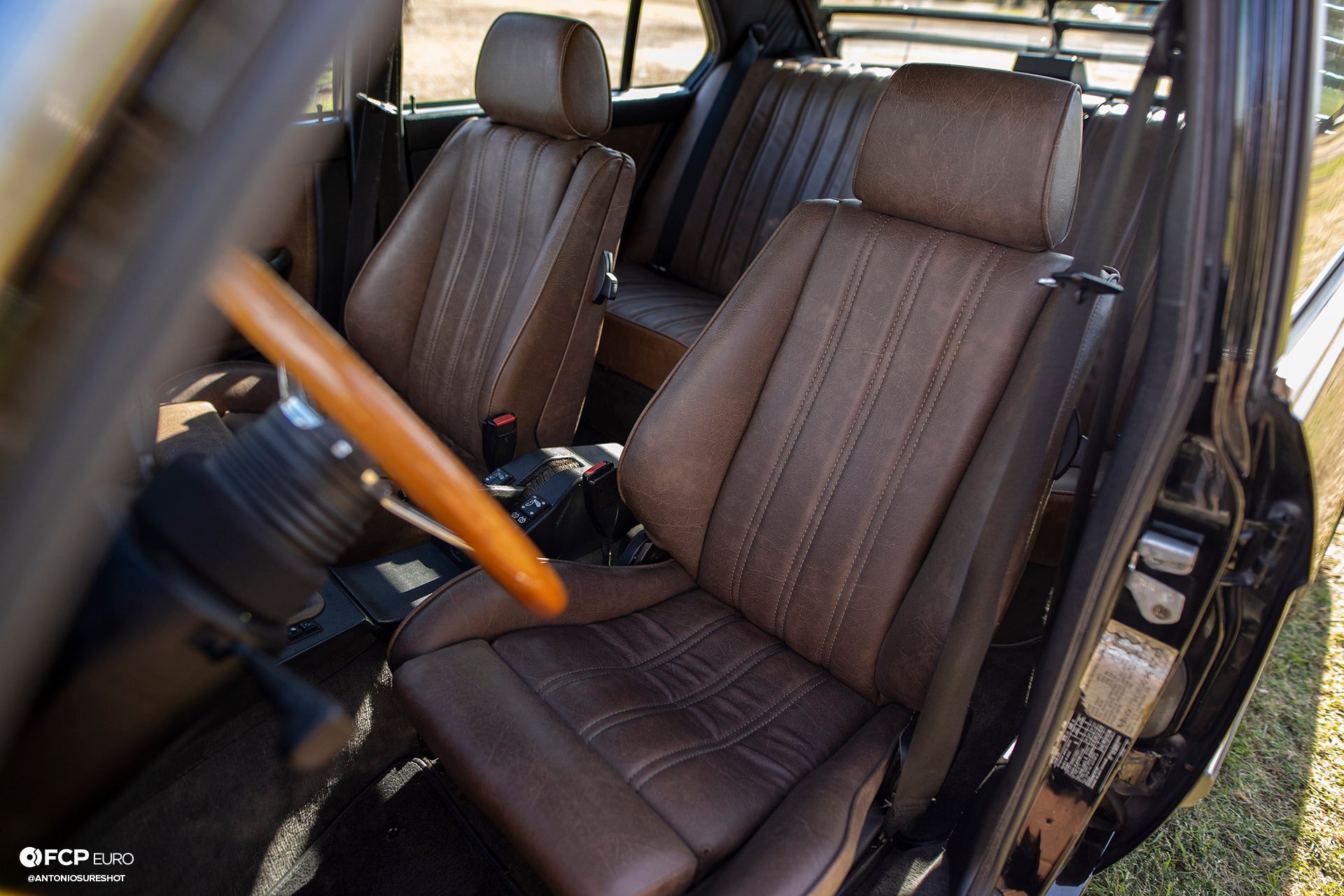 The wooden rim of the wheel just matches so well with the Brown Buffalo leather on the BMW E24 6-series power sport seats. The mix of black, stained wood and deep brown leather just makes this E28 feel more luxurious than it had when it was new. 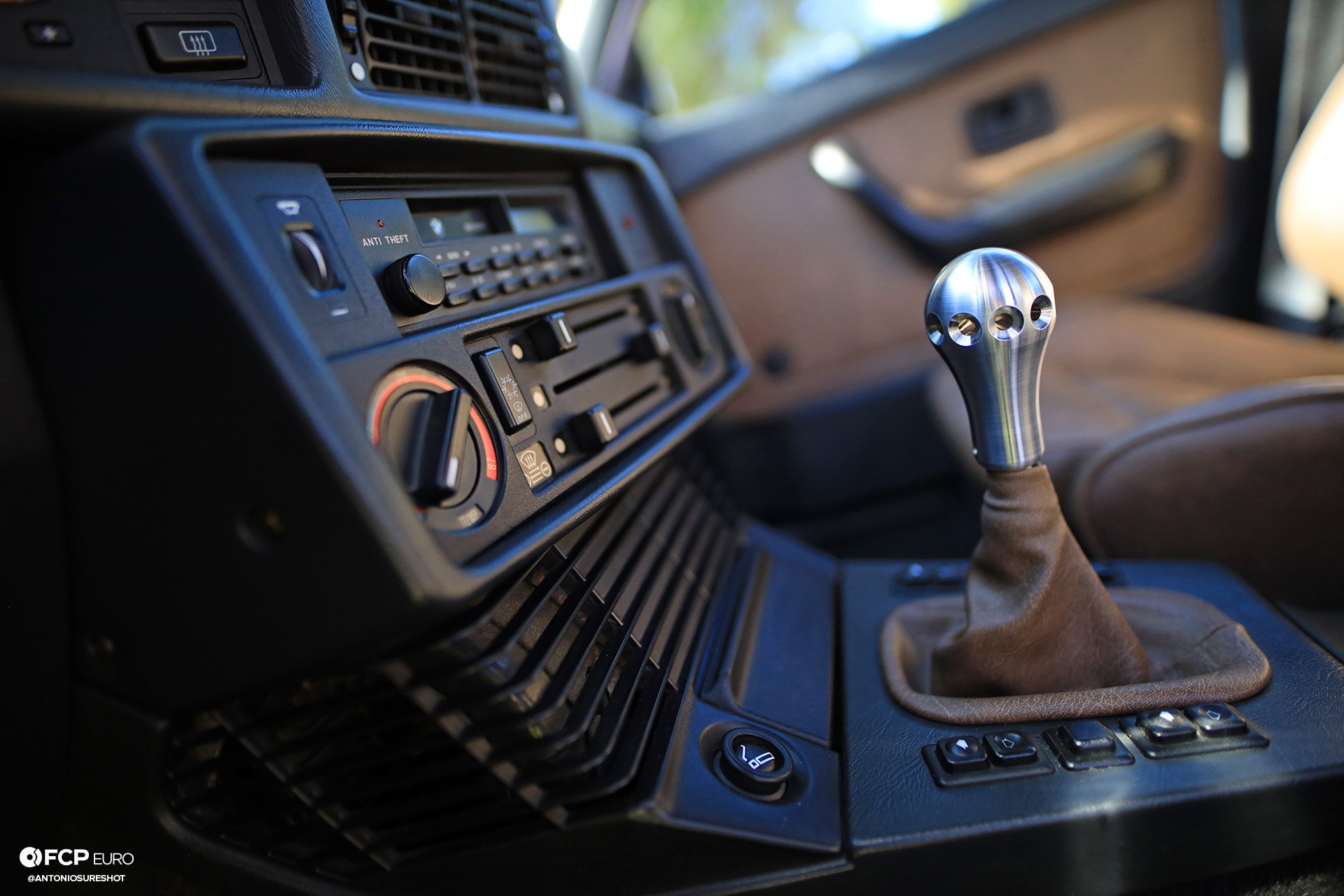 The shifter, though, brings just a touch of contrast, but a touch that isn’t without its place. The Rennstall RSKT 2 aluminum shift knob was made on a CNC machine out of 6061 T-6 material. The holes give it a motorsports look while also reducing some of the weight as you row the gears. 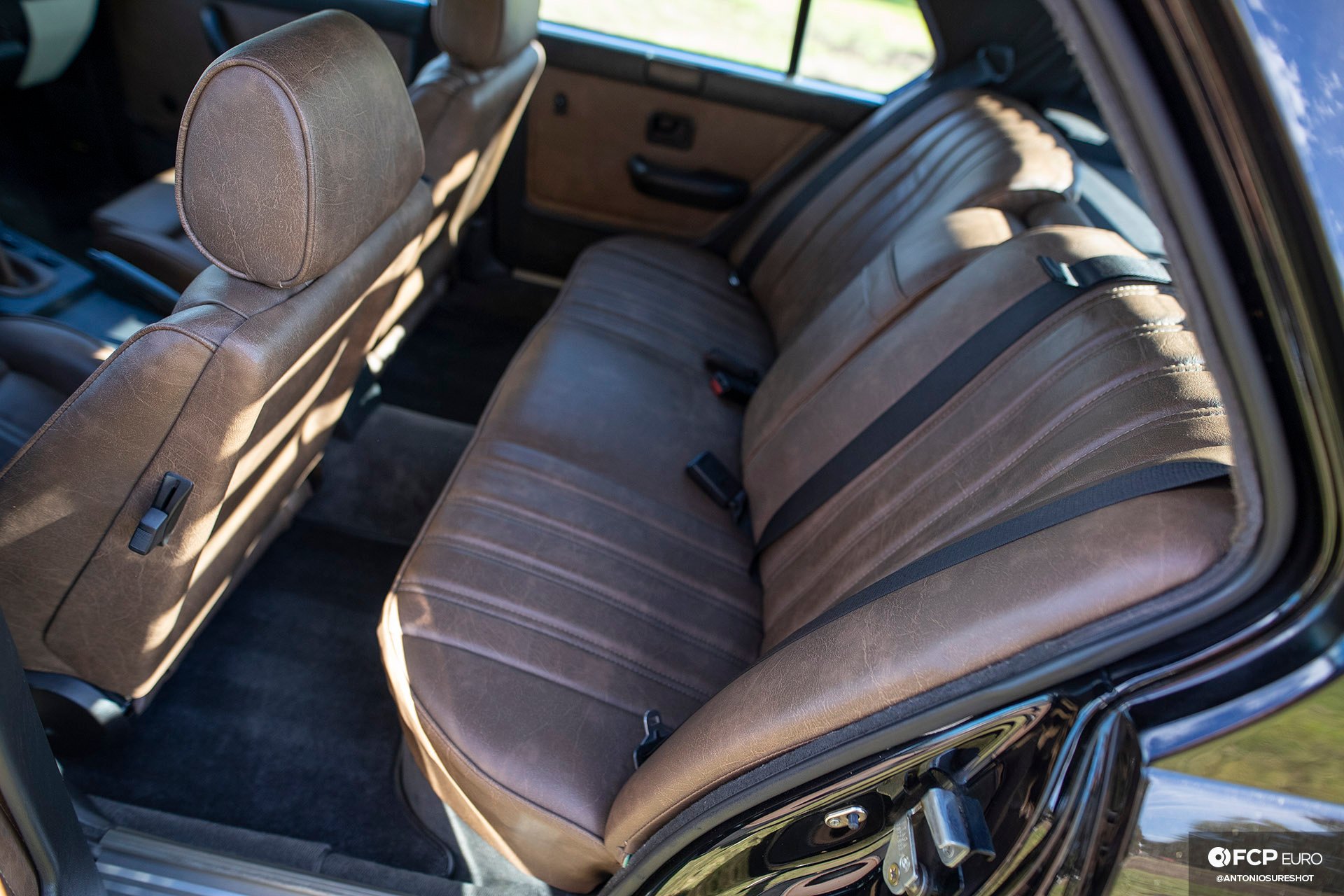 Just as with the front occupants, the rear passengers are treated to Brown Buffalo leather seats as well. Even the armrest center console of the bench seat is fully wrapped in this hide. 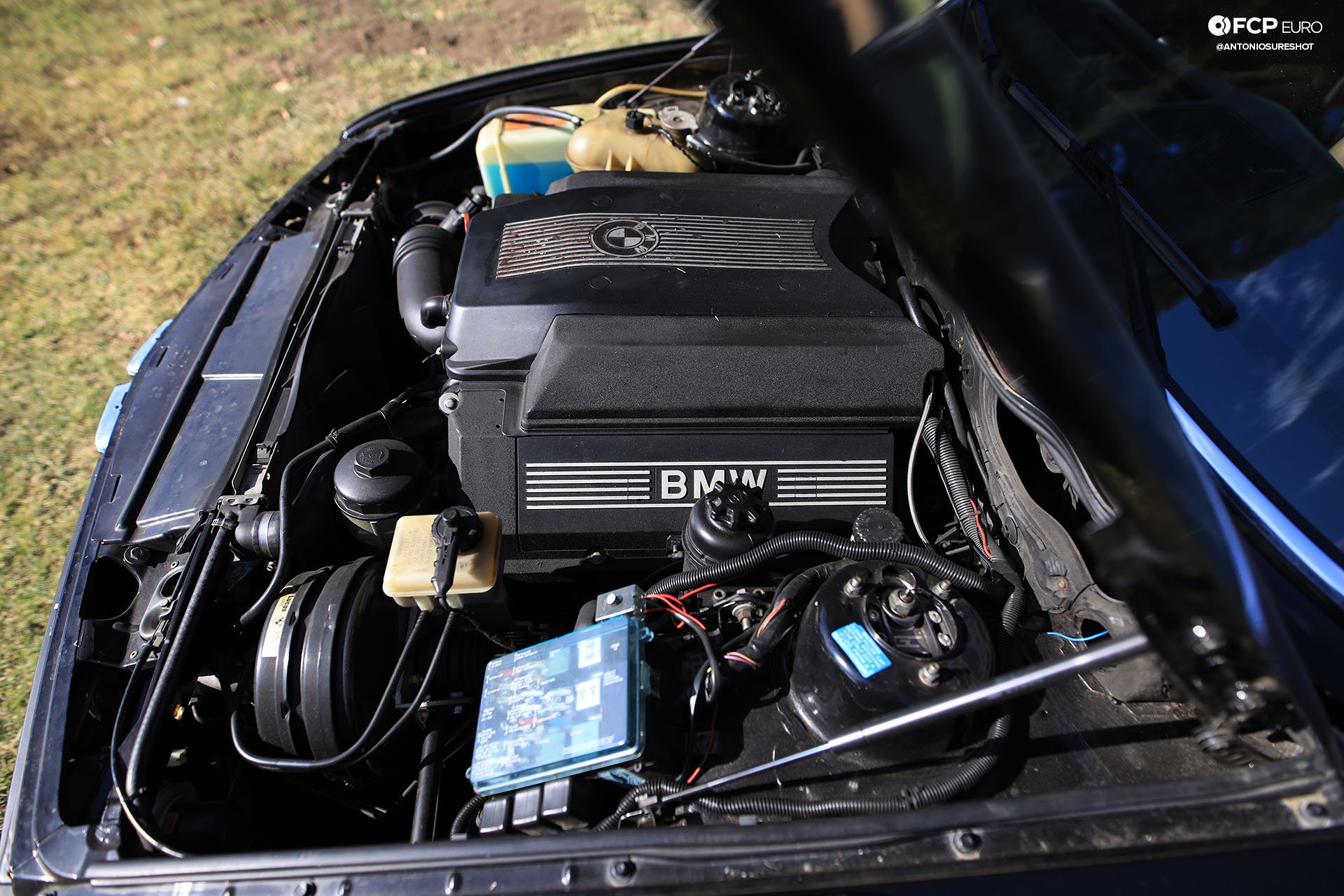 It did require some parts to be located to some very interesting areas. For example, Jeremy moved the brake booster from the firewall to where the stock airbox used to be. That also required the brake fluid reservoir to move from the top of the master cylinder to a remote location, which is why you see it behind the booster.

If you’re wondering how that entire setup works, there is a rod that goes from the original master cylinder location to the new location. This transfers the motion from the pedal to the booster so that it still can operate properly. This type of relocation isn’t seen much in the European car modification world.

Relocating the brake booster has been done many times in off-road and hot rod applications. Doing it this way will still allow the use of a vacuum-assist brake booster. With the hood closed and driving it around, you don’t quite feel the difference. 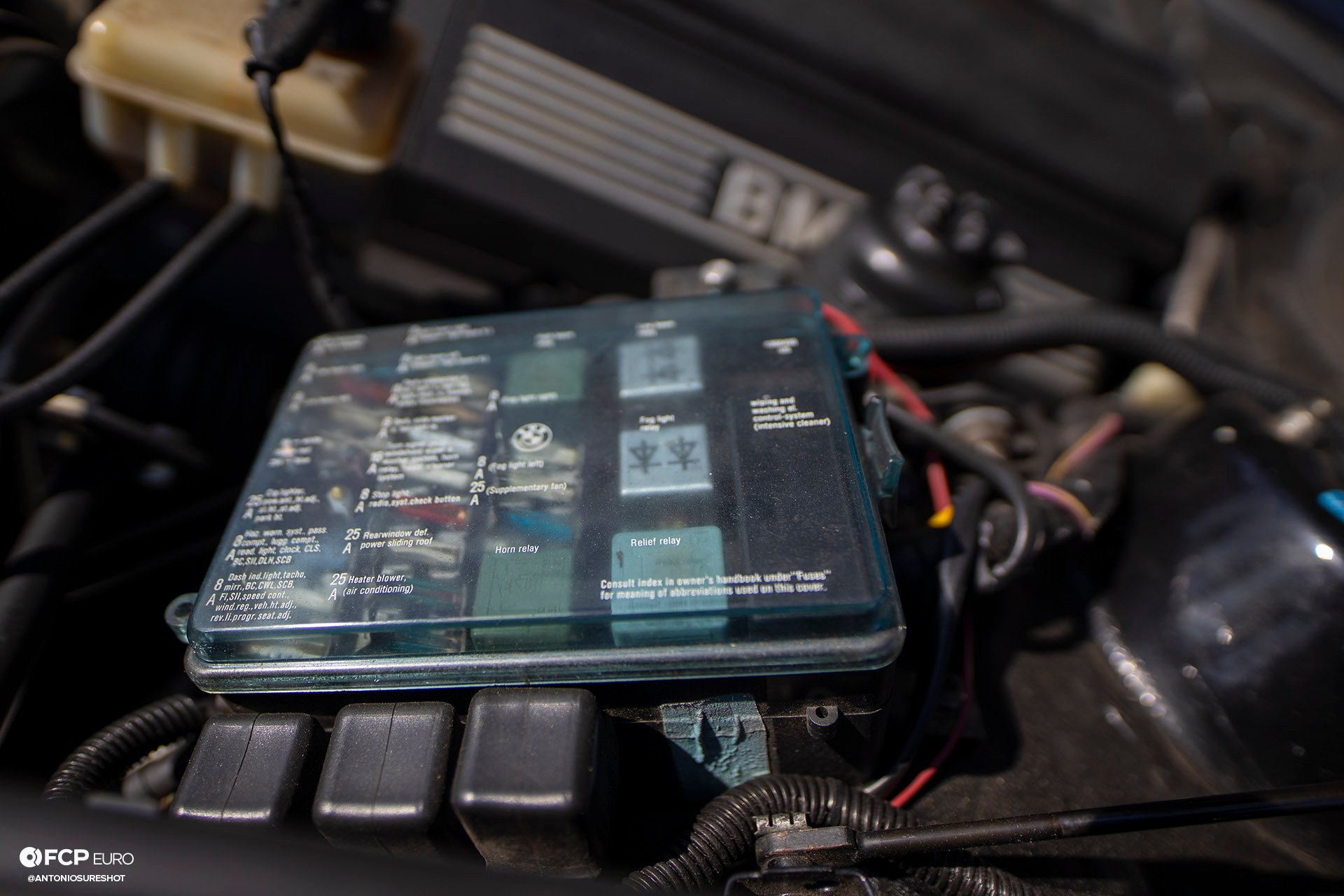 The BMW under hood relay and fuse box remains in its stock location as well as being reused for the swap. 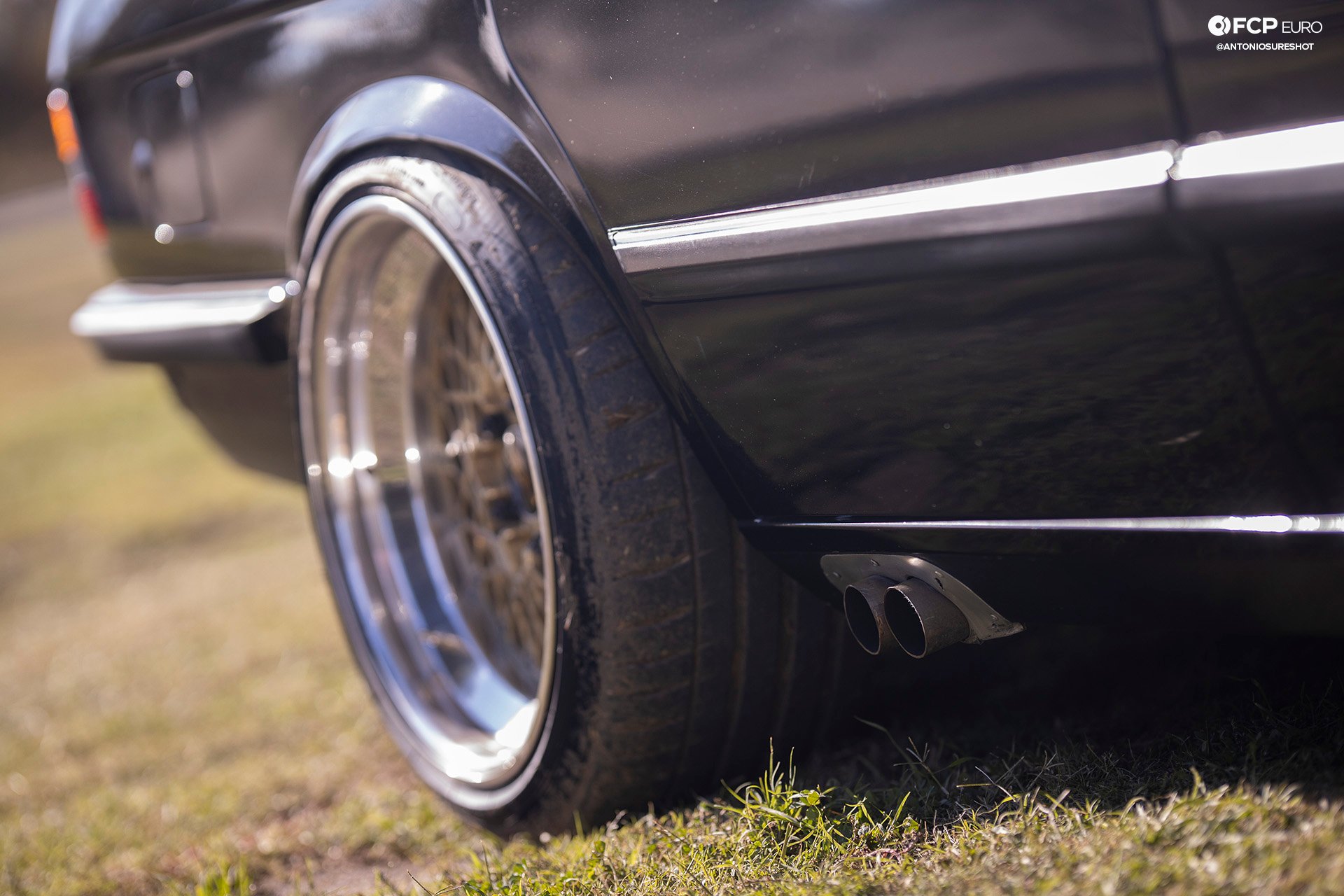 The exhaust no longer goes all the way to the rear of the E28, but instead comes out the passenger side rocker panel. It has a custom cutout and metal fill just to facilitate this design. You can also see just how low the car still sits over the BBS wheels. 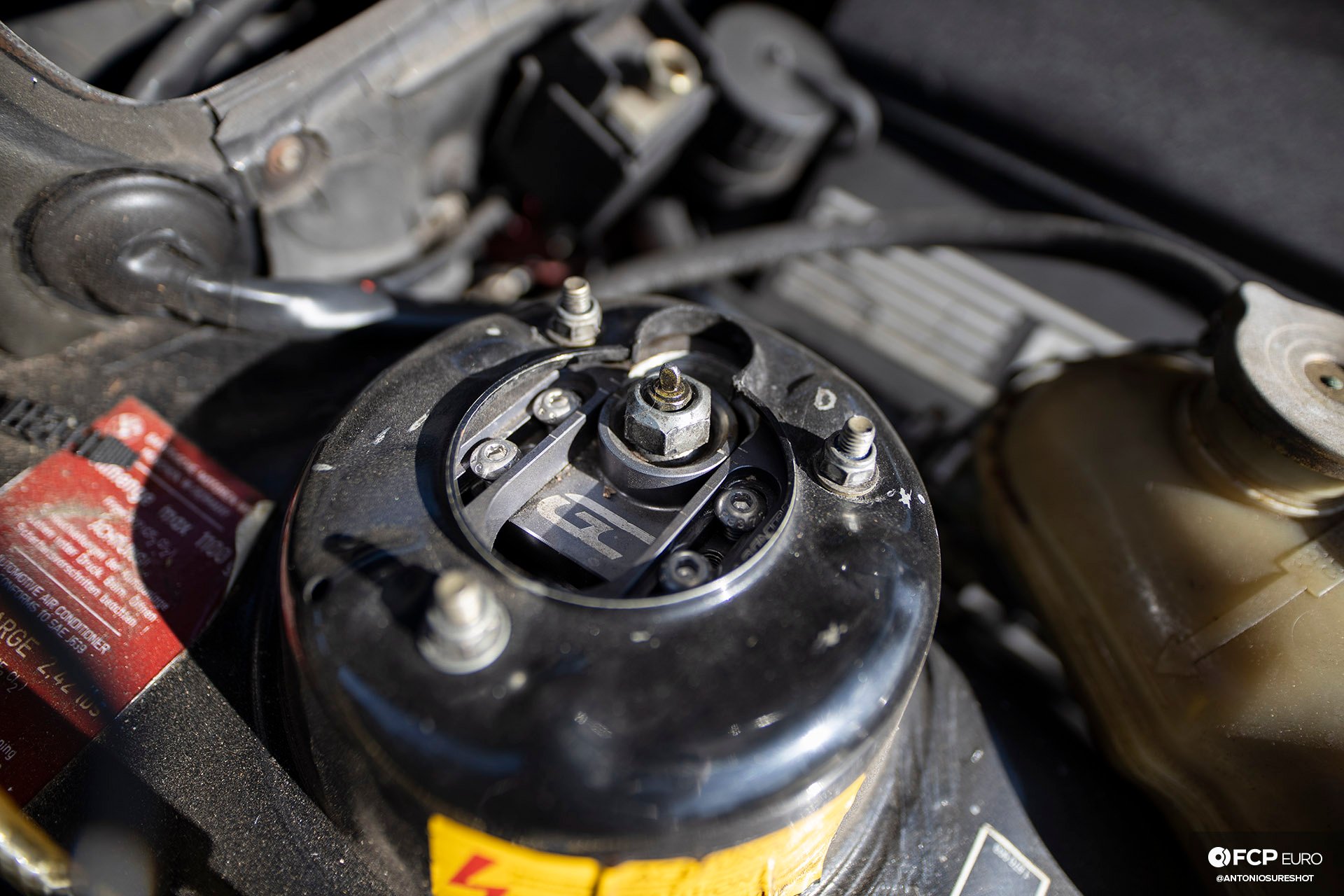 Ground Control Camber plates also give you hints as to how this stance and wheel fitment are achieved. A careful eye will also notice that the previous owner notched the towers. Even though Jeremy doesn't use such an extreme camber setting, the previous owner did a great job considering these notches look nearly factory-like in their execution. 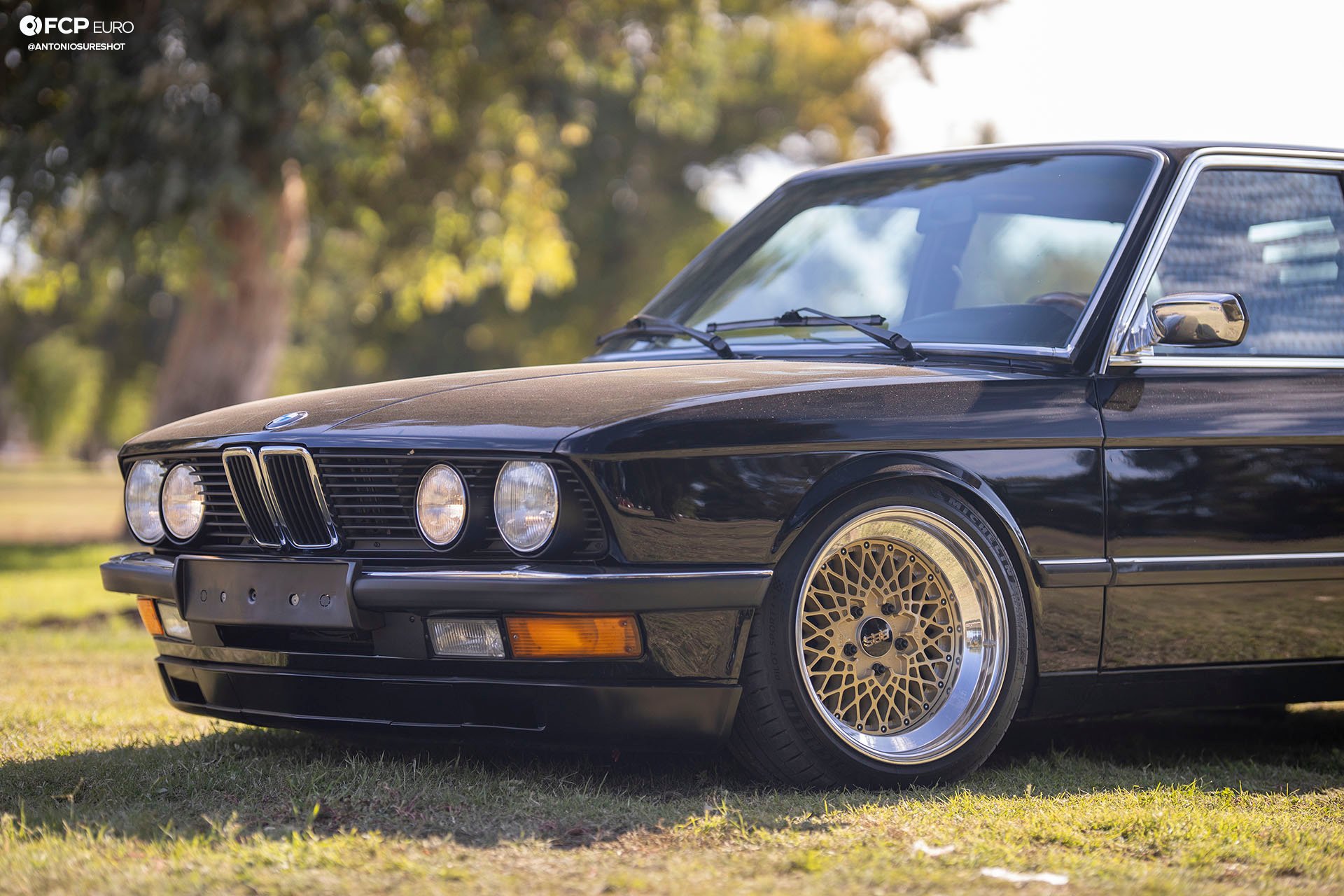 The BBS E50 wheels are massive at 17x10 all around with 245/40R17 Michelin Pilot Sport 4S tires. These wheels were custom ordered with magnesium faces and an offset that allows for a four-inch wheel lip.

Even at its low height, the car isn’t cambered out in the front like you would expect. This is due to using a custom front subframe, custom adjustable lower control arms and Ground Control adjustable camber plates. This allows Jeremy to correct the alignment of the suspension for the height it sits at. Additional room is gained for the 10-inch wide wheels by using the Ground Control coilovers. They are a much smaller diameter spring than the much larger stock BMW strut design. 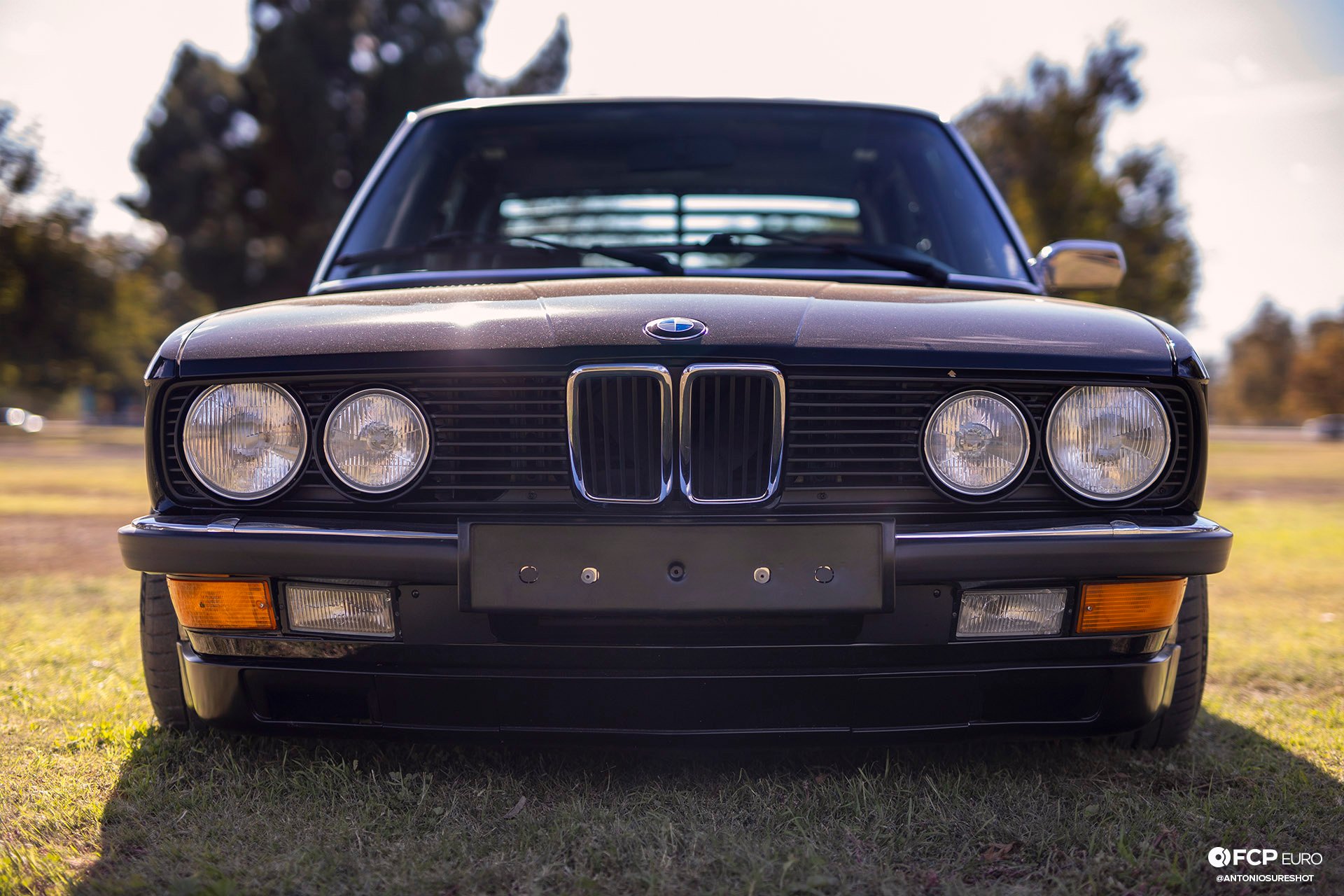 Here in the US, the BMW E28 had headlights that were the same size. However, in Europe, their E28 got larger outer lights that also allowed for far better lighting performance. Fortunately, the upgrade is bolt-on and only requires a bit of wiring to make it work. Jeremy went even further by also getting the European bumpers and the front valance to match the European headlights. The crown jewel of the entire package is that very rare front lip. It comes from the M5 and it just completes the performance look of Jeremy’s E28. 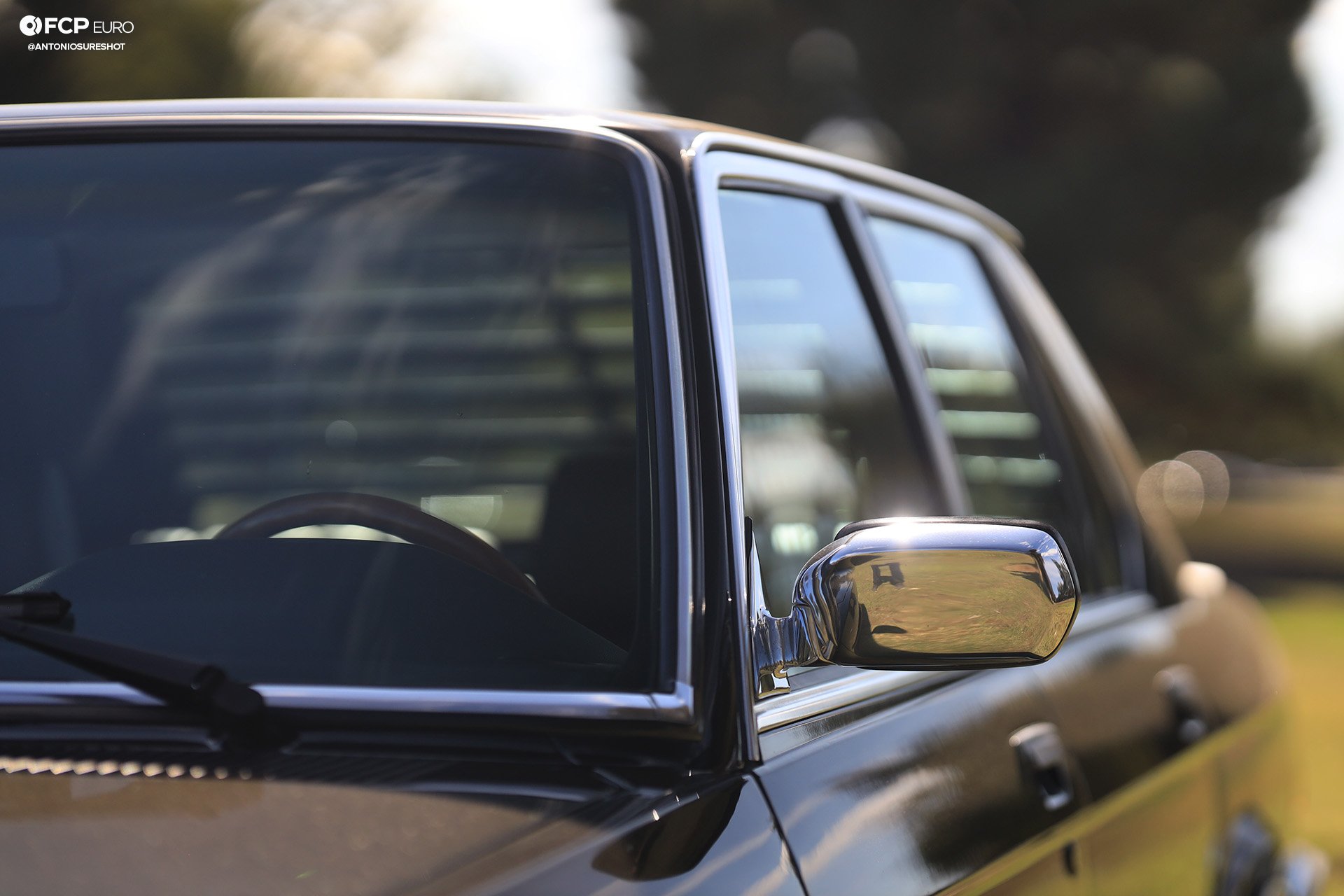 The chrome trim of the widows and bumpers highlight the looks of the car. That being said, you might notice that Jeremy’s car only has one outside mirror in chrome. This comes from the E12, the previous generation 5-series before the E28. It only had a single outside mirror. 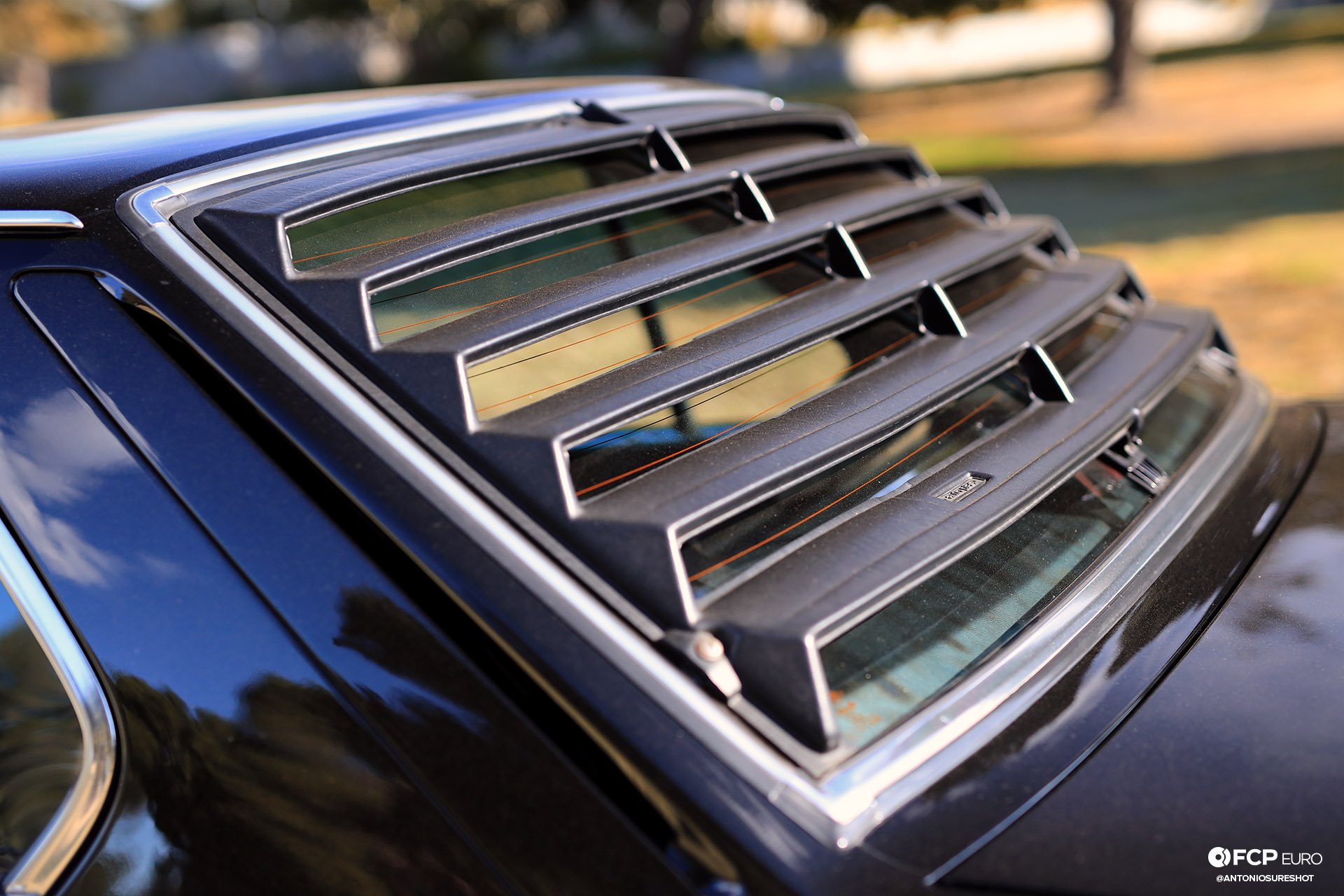 These are rare vintage Auto-Plas rear louvers, which provide a bit of shade for the rear of the car. This incredibly rare set of louvers is also great for reducing the interior heat by blocking some of that Southern California sun. It gives the E28 some classic looks with some real old-school parts. 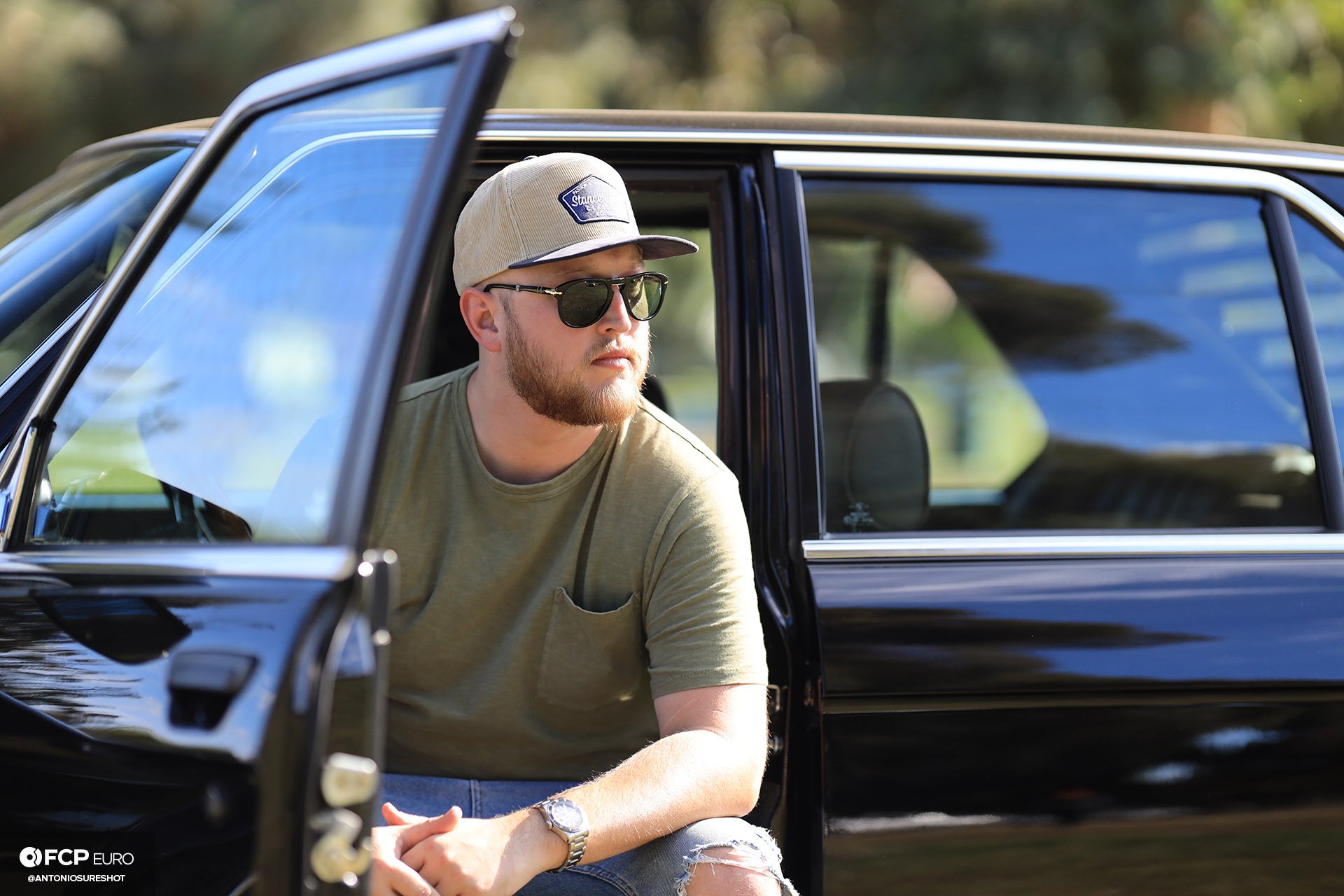 “I started acquiring parts for the Euro bumper swap as soon as I bought the car,” Jeremy explained about the trials and tribulations of E28 ownership, “that’s because these parts can be hard to find as they are no longer available as new or reproduction.”

“The M60 V8 swap was one I had entertained in the past,” said Jeremy, “I think it fits in and transformed this E28 into a European muscle car. It has quickly become one of my favorite parts of the car. Hard to argue with the torque and growl it makes.” 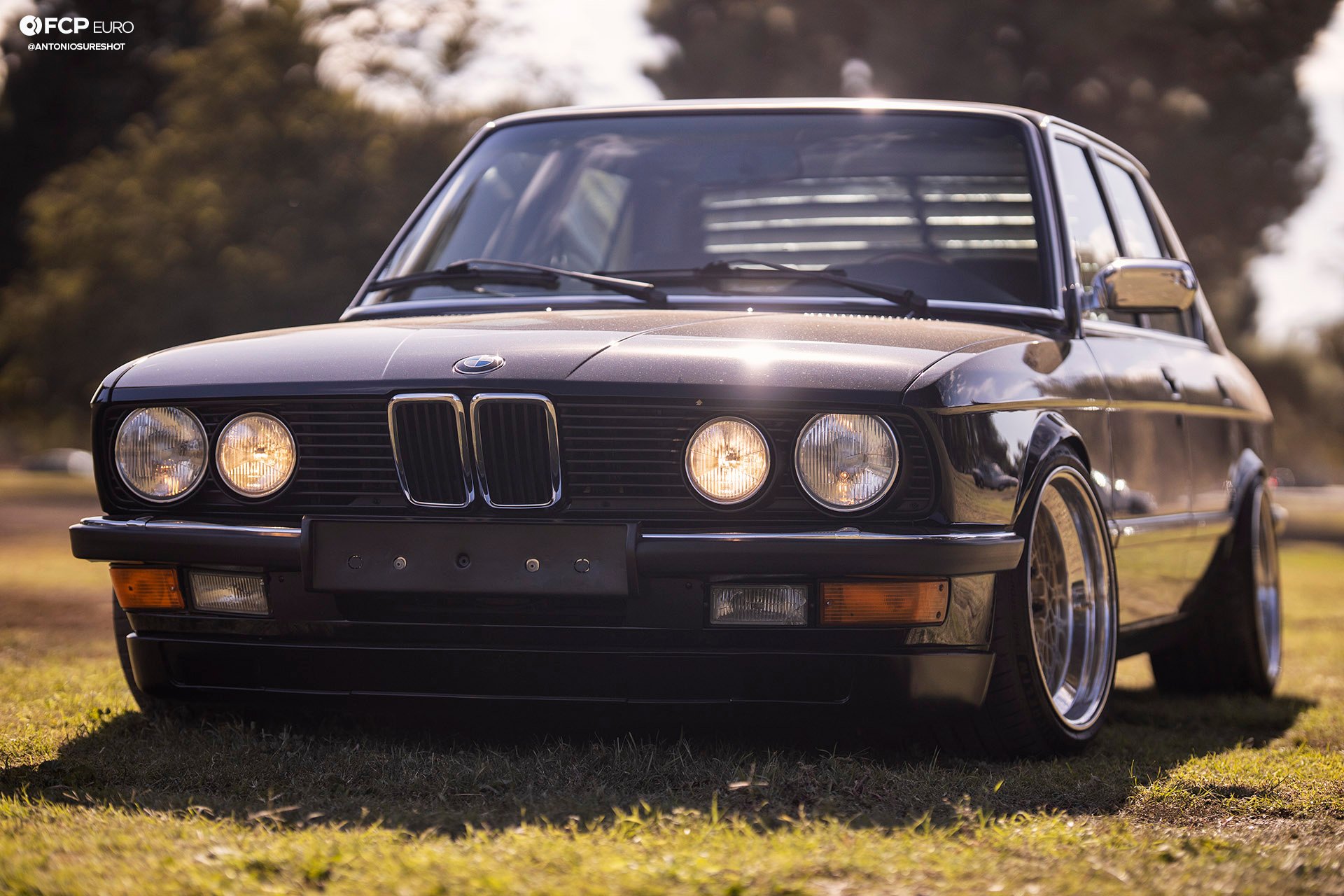 “European muscle car,” as Jeremy describes it, is probably the best description of this E28. From its gorgeous interior, stance, and V8 power, it’s not hard to think of that genre of automobiles. Even the relocation of parts to facilitate the V8 swap calls back to hot-rodders fitting giant engines into tiny engine bays like the 1932 Ford or even the Shelby Cobra. If there was a picture that needed to go with a description of a European hot rod, this 535i would be the perfect choice. It has got the looks and, more importantly, it’s got the V8.

If you like this BMW E28, you can find additional BMW-related content at bmw.fcpeuro.com, as well as more build features like this one, here. If there's anything specific you would like to see, or if you have any questions/comments, leave them in the comments section below.