You always remember your first. This oft-repeated phrase can be applied to many things in life, some of which are best left out of most forms of public discourse. But when it comes to first cars, automotive enthusiasts can universally and enthusiastically discuss the merits, or lack thereof more often than not, of their first set of wheels.

From family hand-me-downs to whatever inexpensive beater we can scrape together pennies to purchase, first cars are rarely our dream cars. It’s probably for the best for most of us, because taste, an aptitude for choosing the right modifications, and a sense of our own mortality are usually missing at a younger age. Being stuck with the old family minivan both keeps us alive, and our first projects from looking like something best left on the cutting room floor of a Fast and Furious movie production. 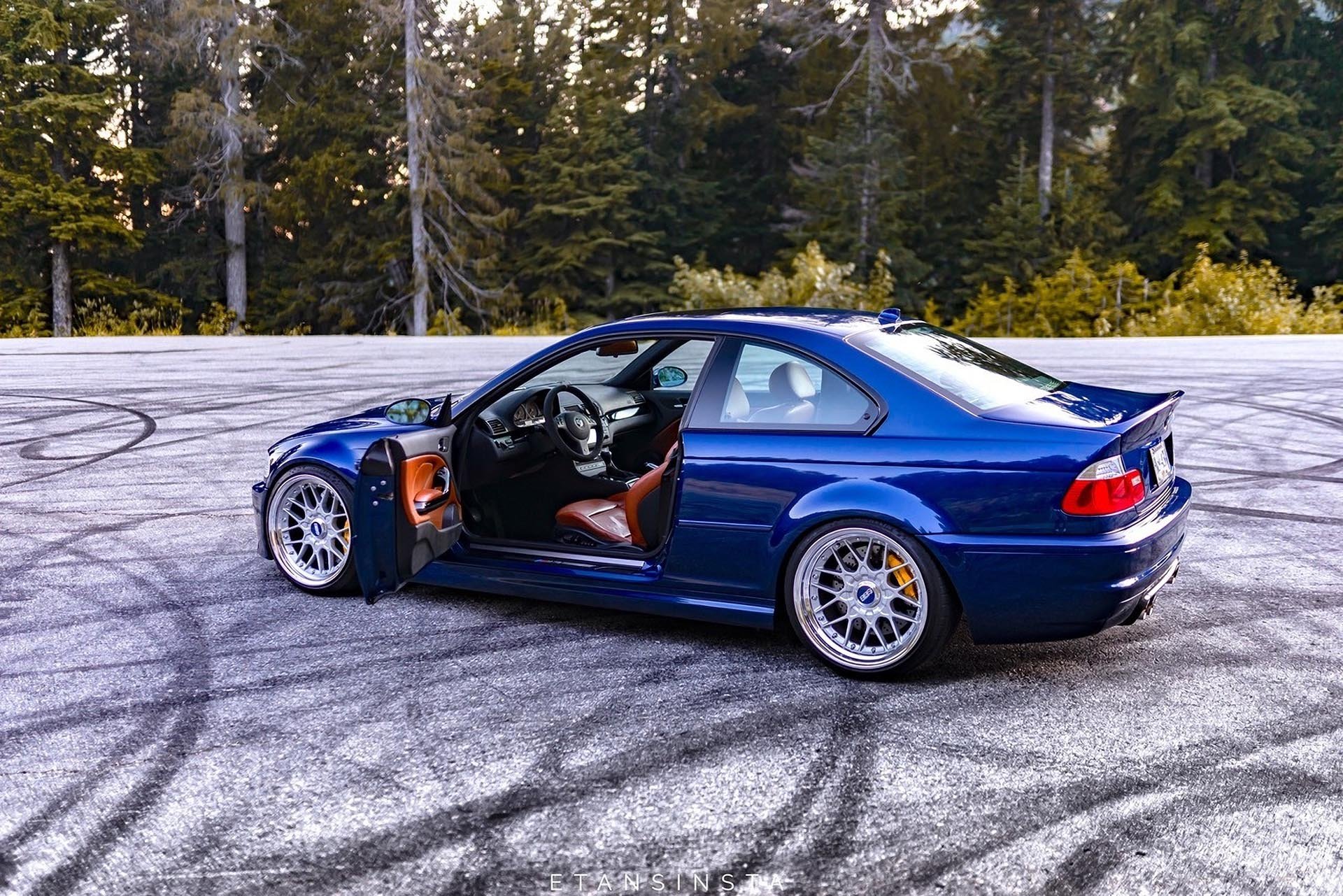 Pouya Bahrami, the owner of this near-perfect Mystic Blue BMW E46 M3 and winner of our very first #FCPEUROMADNESS competition, wrecks the curve in all regards when it comes to first cars. Believe it or not, this beautiful M3 is his first stab at automobile ownership. Unlike many of us, Pouya had both the vision and the patience to wait and find the right car.

“Ever since I was 12, I always liked the E46 M3. Originally, I fell in love with the Laguna Seca Blue poster car and knew I wanted one,” Pouya began. “Since my family didn't need to drive often, I was able to use the family car when needed, and I waited and waited until I could afford an E46 M3.”

After nearly purchasing a few fixer-uppers or SMG examples that Pouya knew he would end up manual-swapping, he located this 2004 6-speed manual. Finished in Mystic Blue, it was found for sale on M3Forum with a fairly well-documented history.

“I bought the car sight unseen, and it arrived in a bit rougher state than I expected,” he said. “However,  the Brembo brakes which were retrofitted back in 04/05 were rebuilt recently and in great shape. Blue has always been one of my top choices for the M3, and I knew I wanted it with the Cinnamon interior, so I bought a full set off of my friend Anthony.” 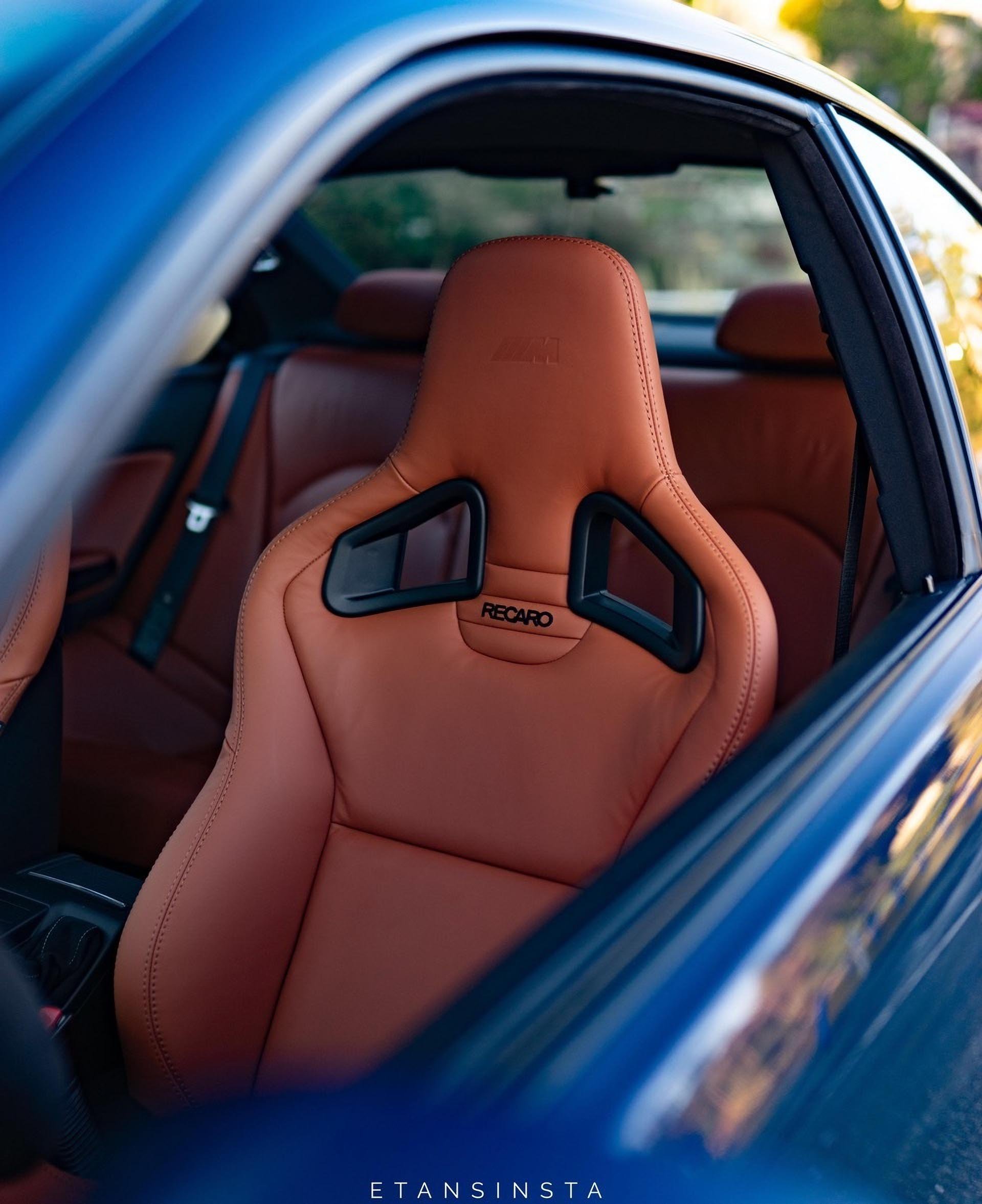 The aforementioned Cinnamon interior is a perfect contrast to the deep blue paint, the centerpiece of which is undoubtedly the custom-covered Recaro Sportster CS seats. A recent change which Pouya rates as his favorite part of the car, for the time being anyway.

“I was very fortunate to have ordered one of the last few sets of the Recaro CS as they are now discontinued,” Pouya continued. “I bought the seats with plans to get them redone, and worked with AMX Performance to have the custom leather reupholstery done. He sent me the covers from Poland, and I installed them myself. It was about 4 hours a seat but well worth it.” 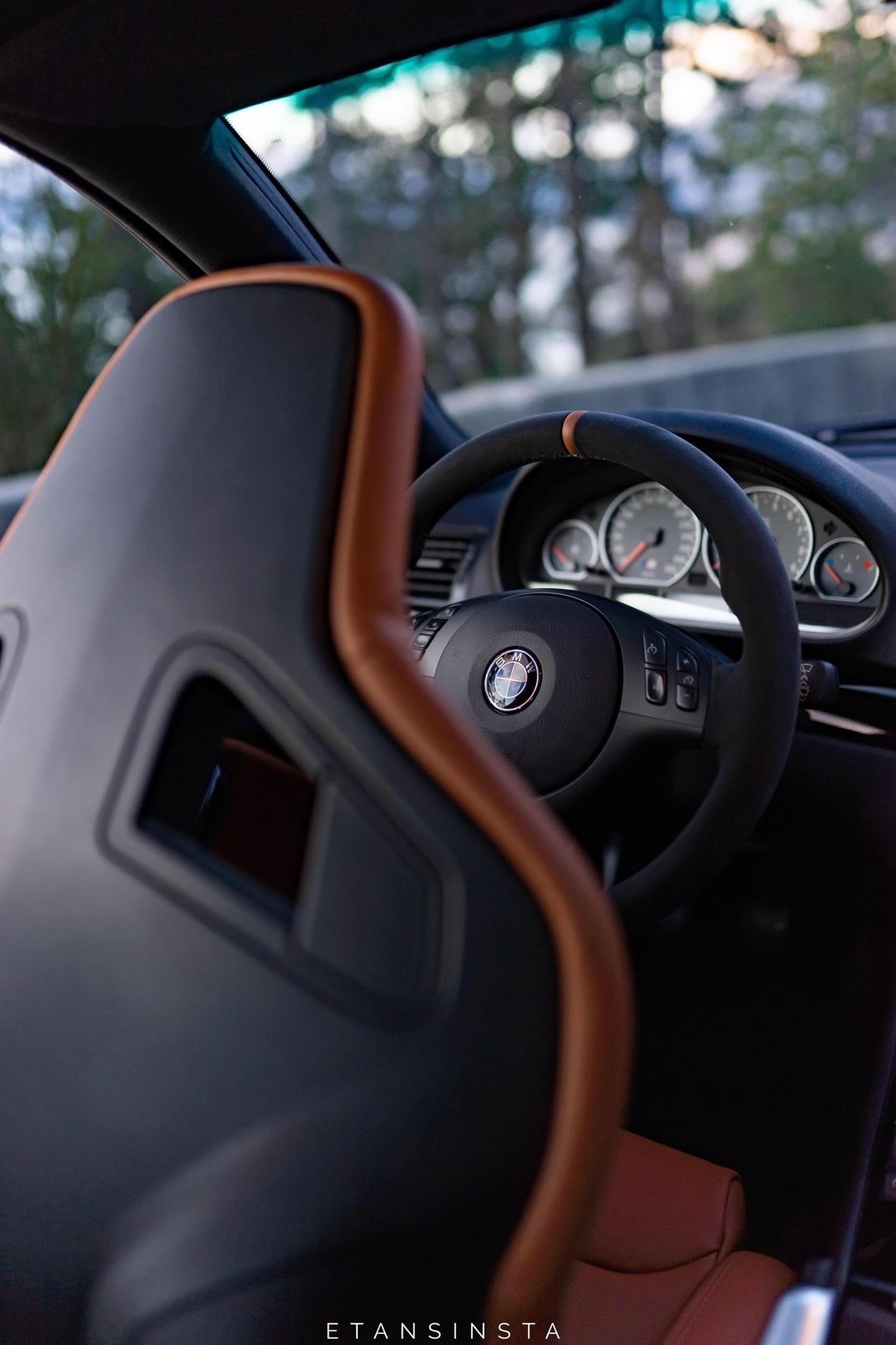 A handful of OEM+ and small custom touches take the interior look just far enough from stock to be something special, but nothing is overdone or impractical. Form and function combined are the North Star that Pouya used to keep his project on course as it progressed. 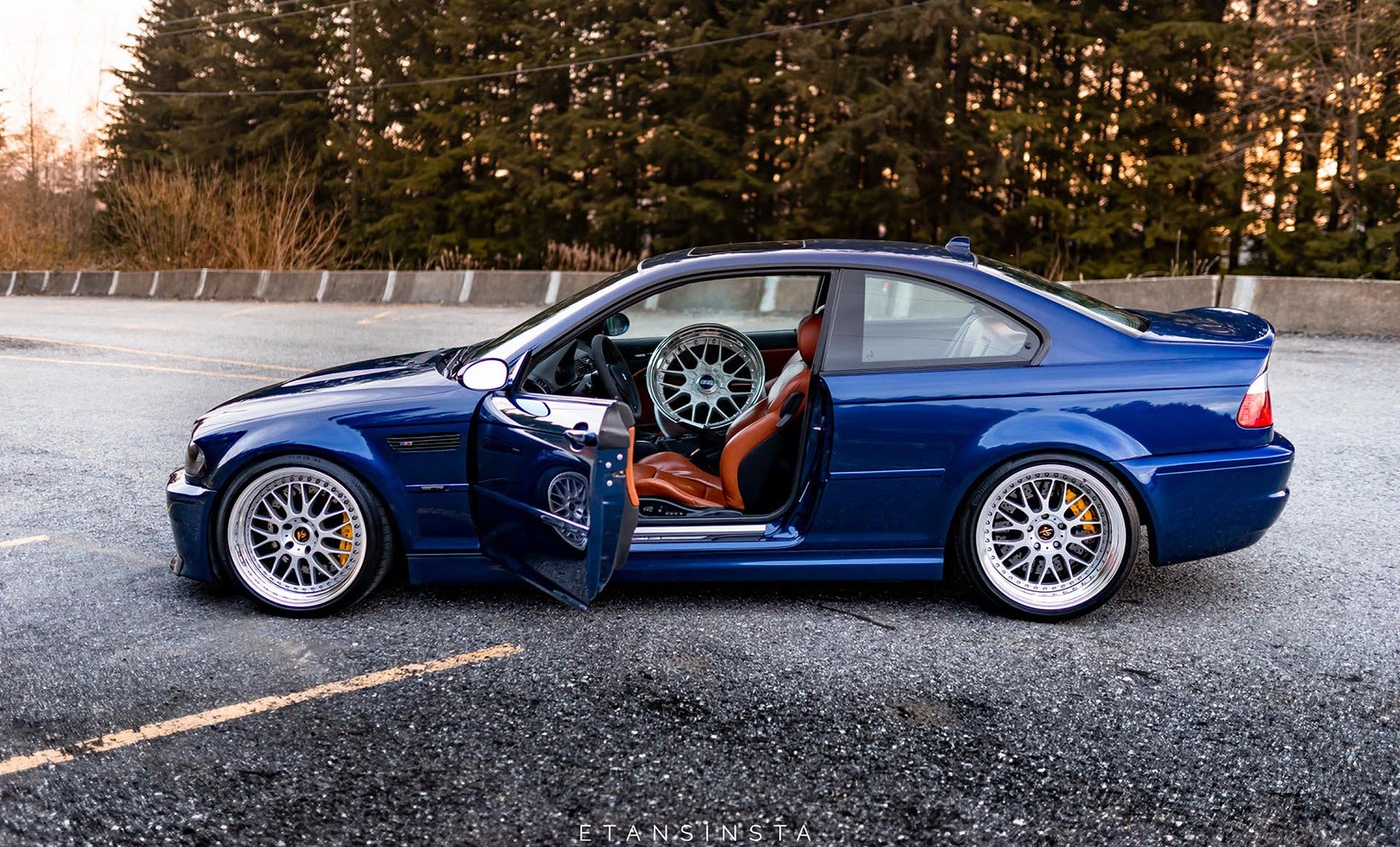 “I've always liked my cars to be functional yet sporty,” he said. “Throughout my ownership, I never wanted the car to get to a point where I can't take it on a casual trip to the store, a road trip, or a spirited drive. That's why I haven't gotten rid of the back seats or done a cage. I don't see a point unless you're actually going to track the car.” 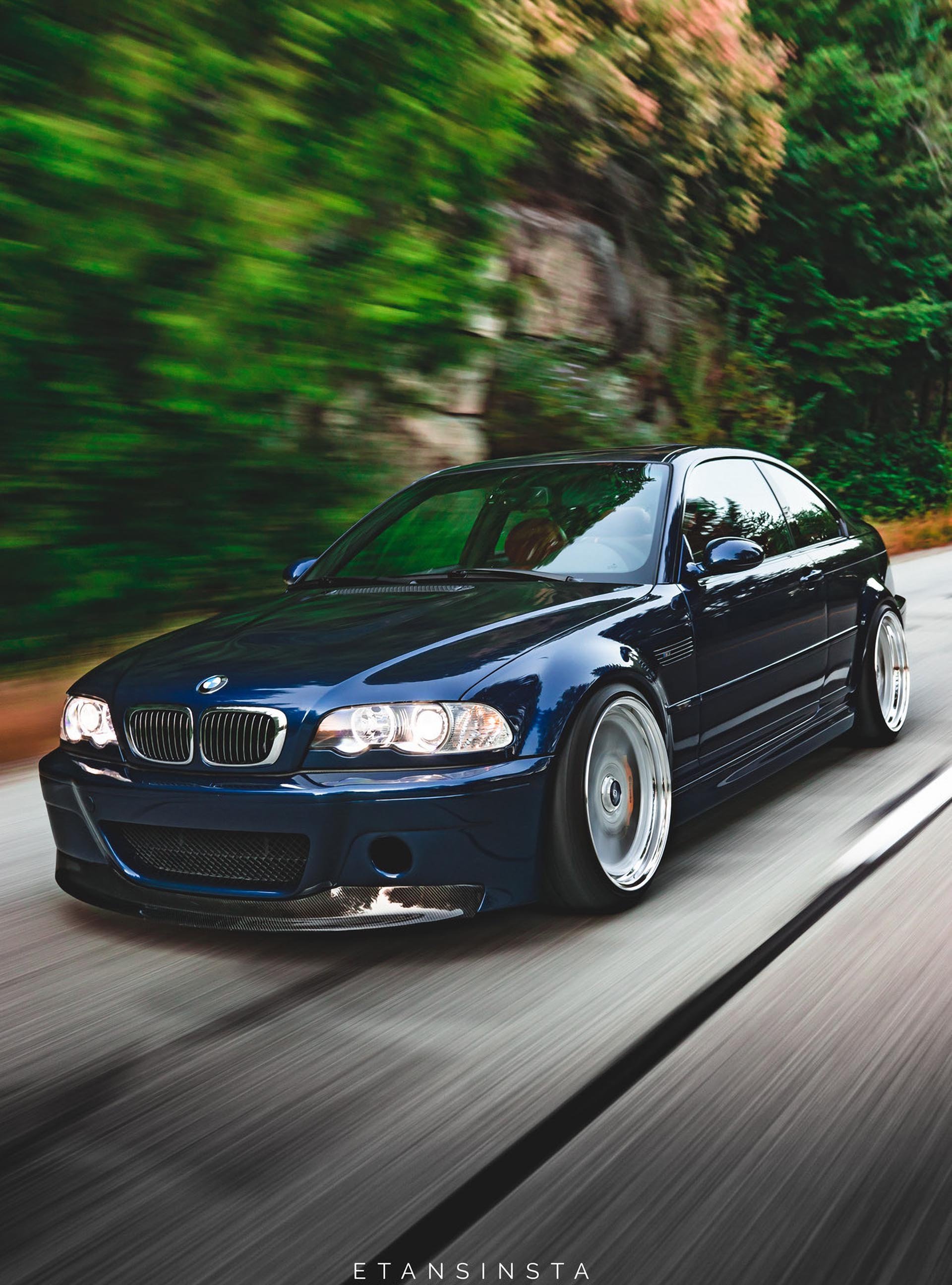 Form and function may have been the guiding light for most of Pouya’s changes, but that’s not to say he got right on the first try every time. Multiple sets of wheels were fitted before settling on the awesome 19” BBS RSII wheels currently adorning the M3. Those big 3-piece BBS wheels measure a sizable 10” wide in the front and 11” wide in the rear, and are wrapped in Michelin Pilot Super Sport rubber sized 245/35 and 275/30, respectively. The 4-piston Brembo GT brakes, donated from a Ferrari F40 up front and a Lotus in the rear, peek from behind the polished spokes.

Pouya’s M3 is sitting perfectly over the BBS wheels thanks to a set of Fortune Auto 500 series coilovers, with a radial bearing upgrade and camber plates. Additional parts from Rogue Engineering, Garagistic, and Turner Motorsports round out the suspension modifications and keep Pouya’s M3 handling as sharp as it looks.

BMW M cars are a tricky bunch to modify when it comes to bodywork. The aftermarket rarely bests the offerings from BMW’s own stylists and engineers. Pouya has kept the external changes limited, with a BMW CSL front bumper and one-piece lip, CSL trunk, CSL diffuser, matte black side gills and markers, shaved rear fenders, and a set of Khoalty angel eyes the total extent of the external visual changes. 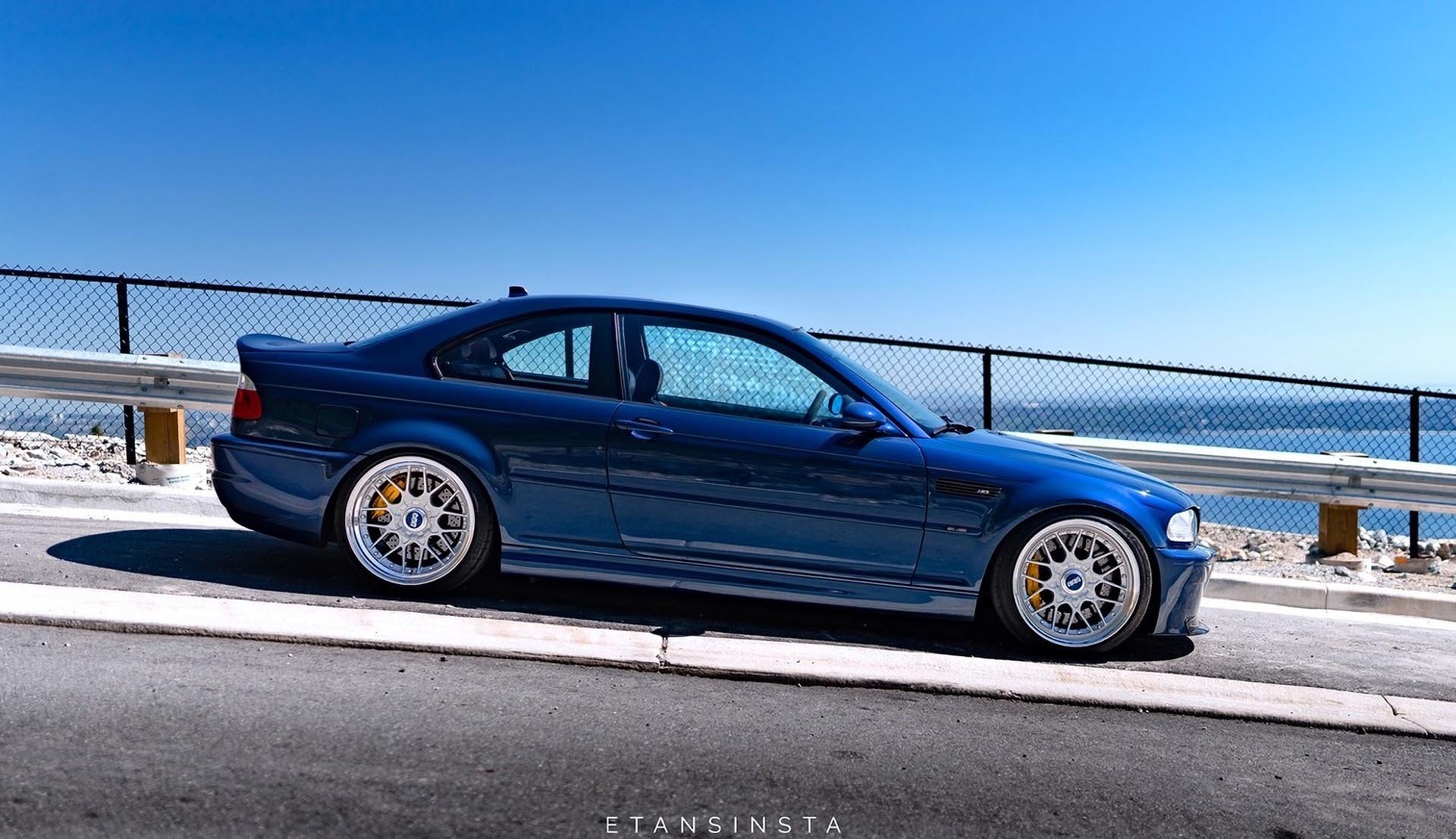 While he was addressing the external concerns, Pouya took the opportunity to replace the majority of the rubber seals, gaskets, and trim. Any body panels showing their age were repainted before the entire car was professionally detailed and ceramic coated. This allows Pouya to spend his time enjoying his M3 on a drive or hanging out with friends on the weekends, rather than spending that time in the garage polishing.

“I detailed the car myself once, and after 16 hours, I never tried it again!” he laughed... “No more polishing for me, not for a long time.”

As this is an M3, it would be neglectful to focus so much on ‘show’ and not treat the S54 to a little bit of ‘go.’ When looking under the hood, your eyes are immediately drawn to the carbon fiber Karbonius CSL Airbox. A Kassel Performance CSL Baseline tune was further refined with custom changes and an 8200rpm redline, while exhaust gases flow through a combination of OEM European, US, and aftermarket exhaust components. Pouya has gone through no fewer than seven configurations before settling on what he believes is the best sound from the high-revving straight-six. 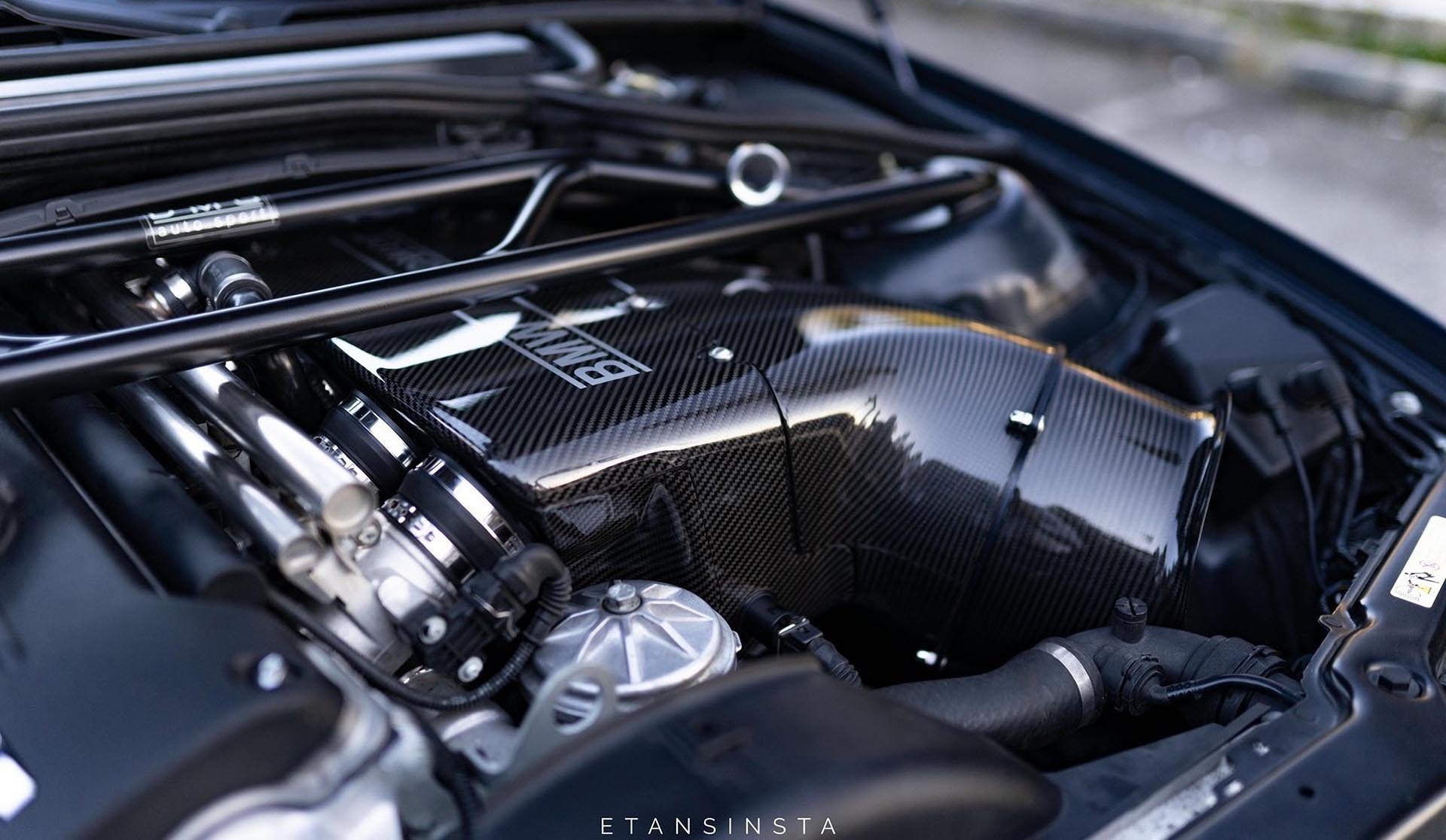 “The car has the perfect balance of a tolerable daily driver, and the exotic sound of the S54 when you’re at wide-open throttle,” he enthused.

Usually when the subject of first cars comes up with a group of enthusiasts, there will be at least a few who will lament selling and moving on. Pouya has no plans to do this  anytime soon. 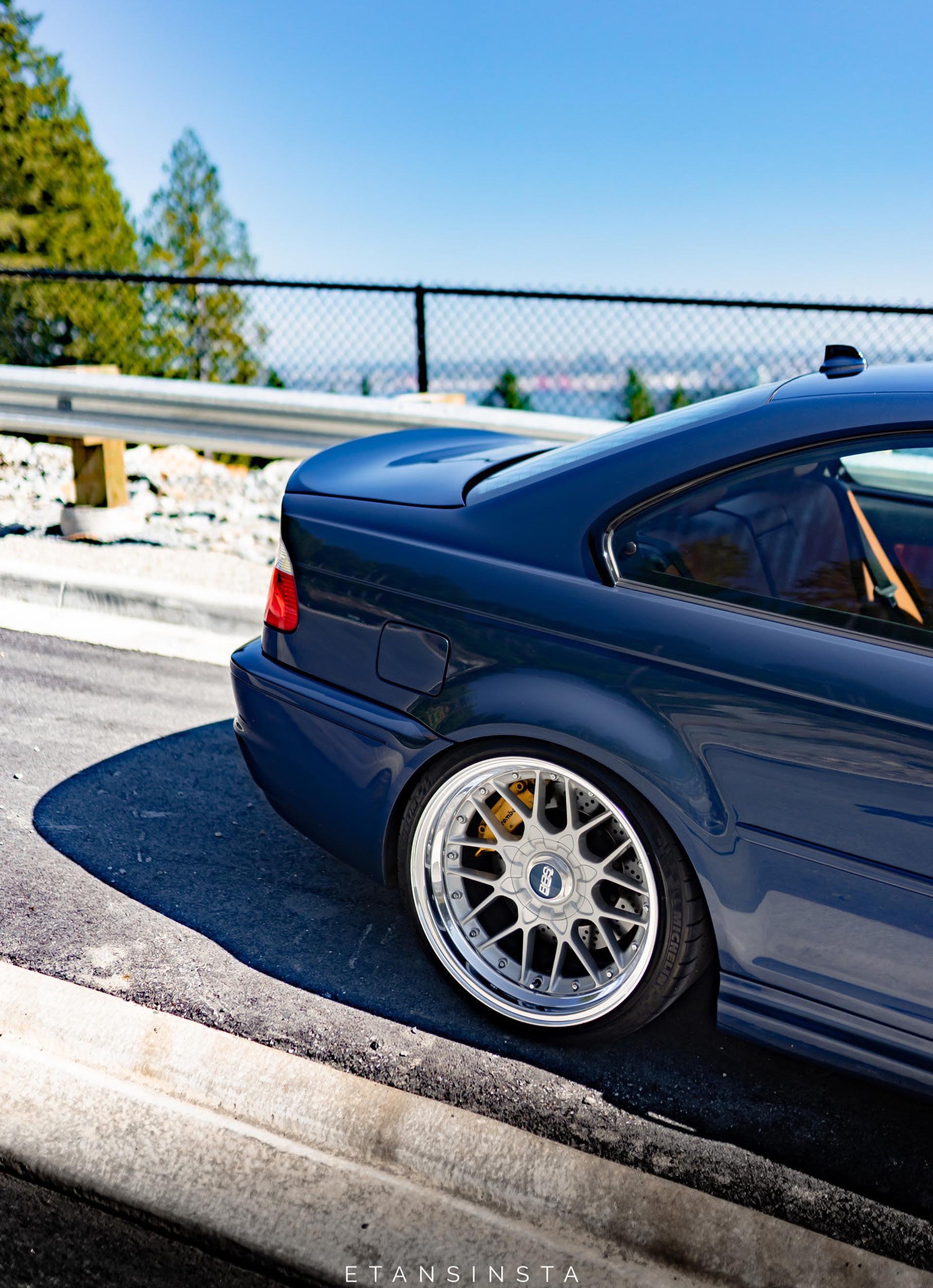 “I hear from many who end up regretting it. I've spent so much time wrenching on this car that I can't justify it,” he said. “I’ve been very fortunate to work on the car myself throughout the entire ownership, especially with the helping hands of my close friends Josh, Ken, Andrew, and Kenny. And I can always count on my friend Ethan for taking fantastic photos. Once you’ve spent the hours that I have, working on a car like this, it would be hard for you to let go.” 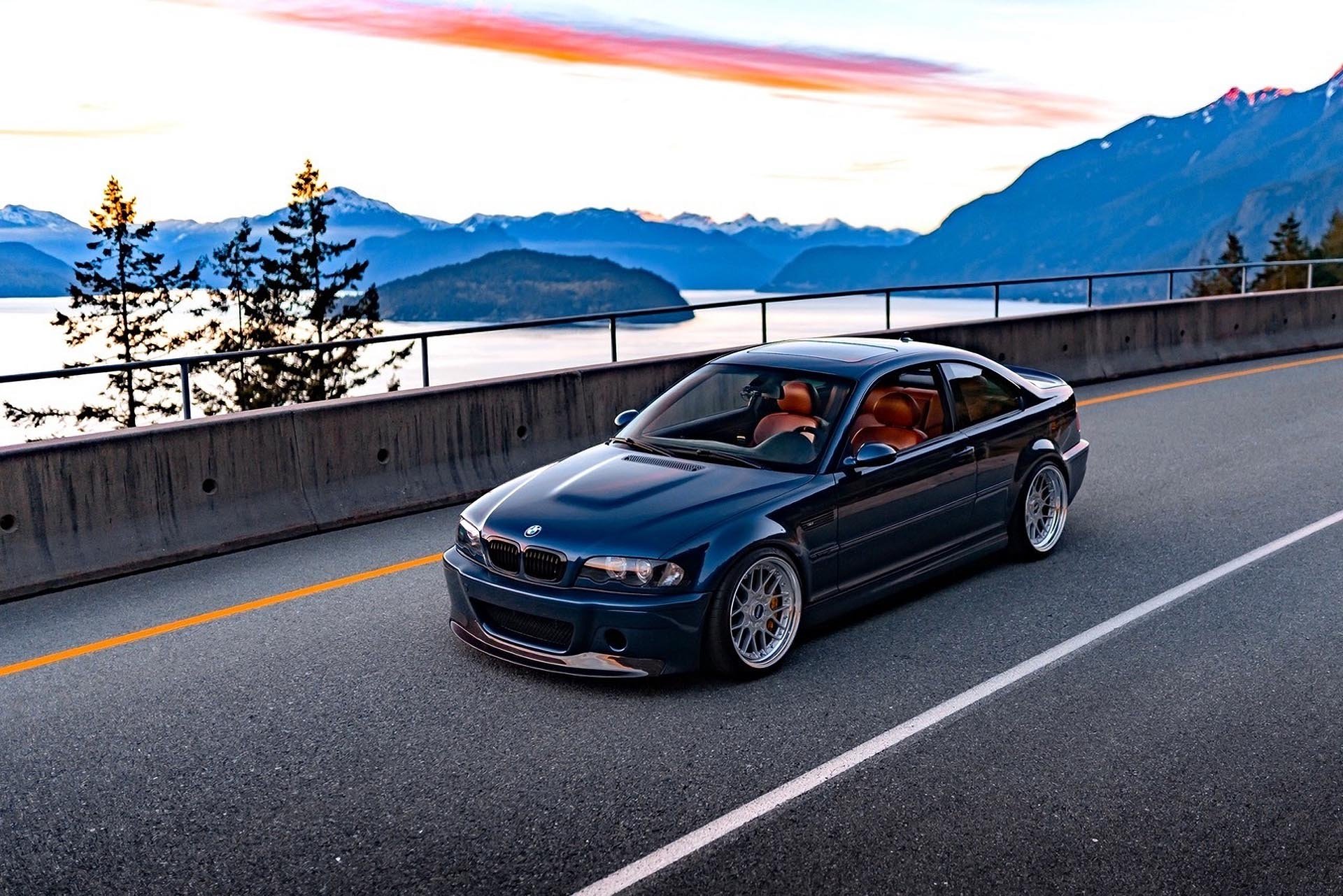 Luckily for Pouya, he has a couple of additional S54-powered Ms standing by to whet his appetite for new adventures when the desire strikes, including a second more track-focused Carbon Black E46 M3 and low mileage Z4M Coupe. He’s not done with the Mystic Blue M3 either and has a few small services planned now that it has hit the 75,000-mile mark. These include a ZHP yellow tag steering rack, Vanos rebuild, and rod bearing replacement. 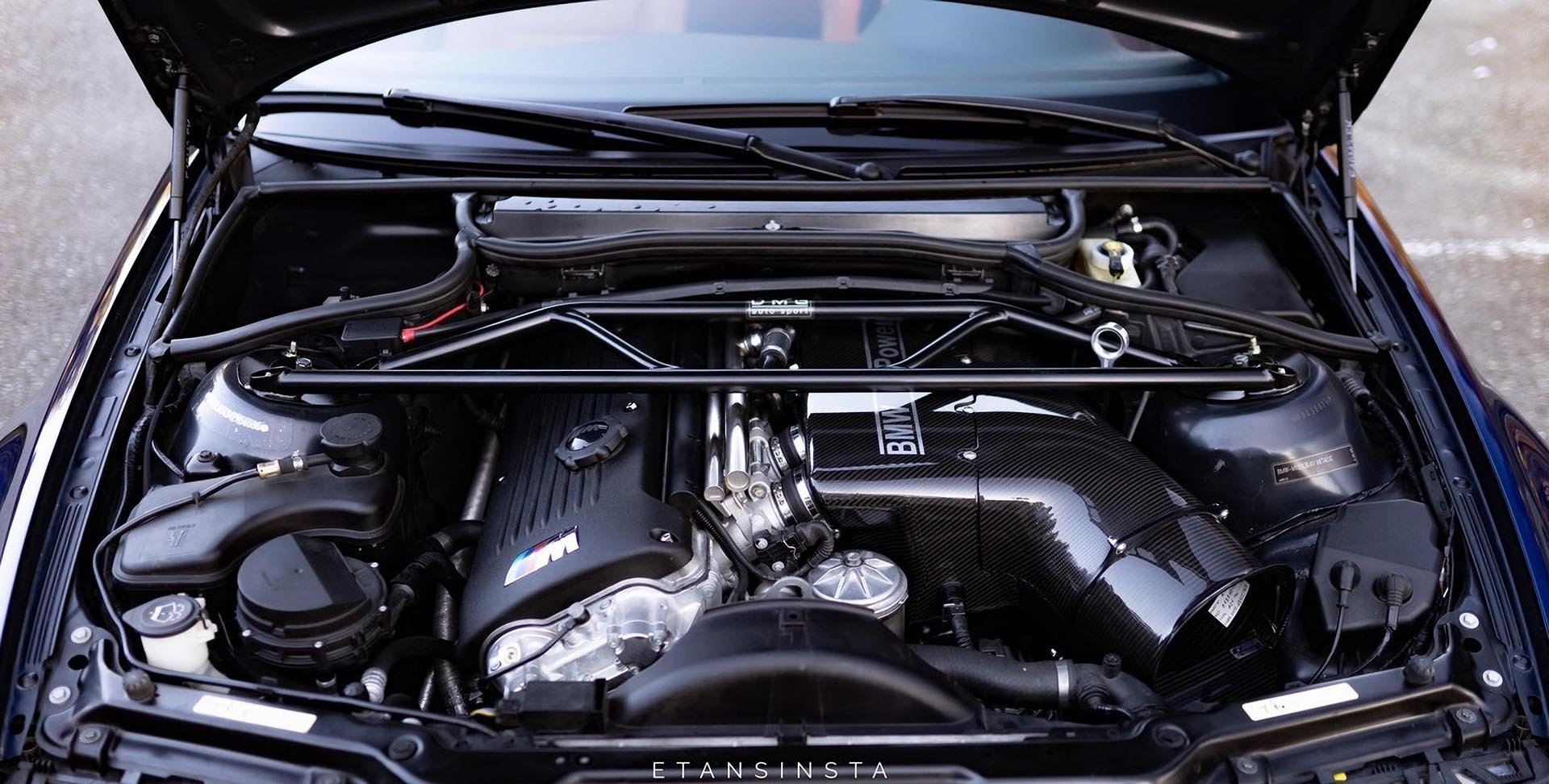 “FCP Euro has been a crucial part of this car’s transformation and restoration,” Pouya said. “I know I can always rely on the FCP Euro team to help me find the parts I need, and the lifetime warranty is no joke.”

“It was an amazing feeling winning #FCPEUROMADNESS,” he concluded. “Every round, I was nervous and anxious at the beginning because I was down, and as the day went on, the ratings went up to give me the lead. I'm very grateful to those who voted for me and appreciate the kind words I received.” 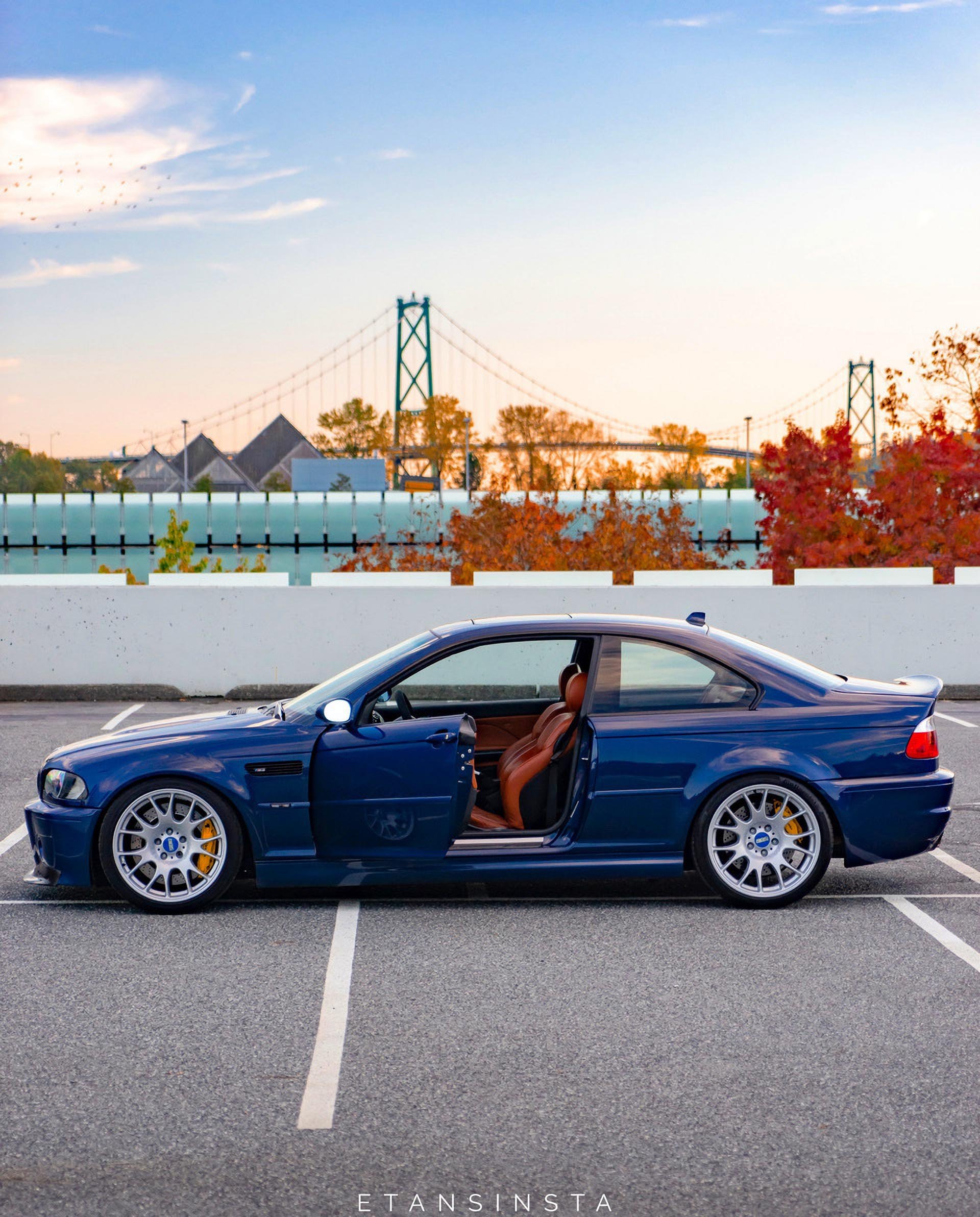 We send our thanks to Pouya and our customers like him from around the world who submitted entries for #FCPEUROMADNESS. It may be the first contest of its kind from FCP Euro, but it certainly won’t be the last. Getting to know our customers better and seeing the projects they’re working on helps motivate us to continue to strive to be the best—and perhaps more importantly motivates us to keep working on our cars. Whether it’s your first or fifteenth, they are always special. 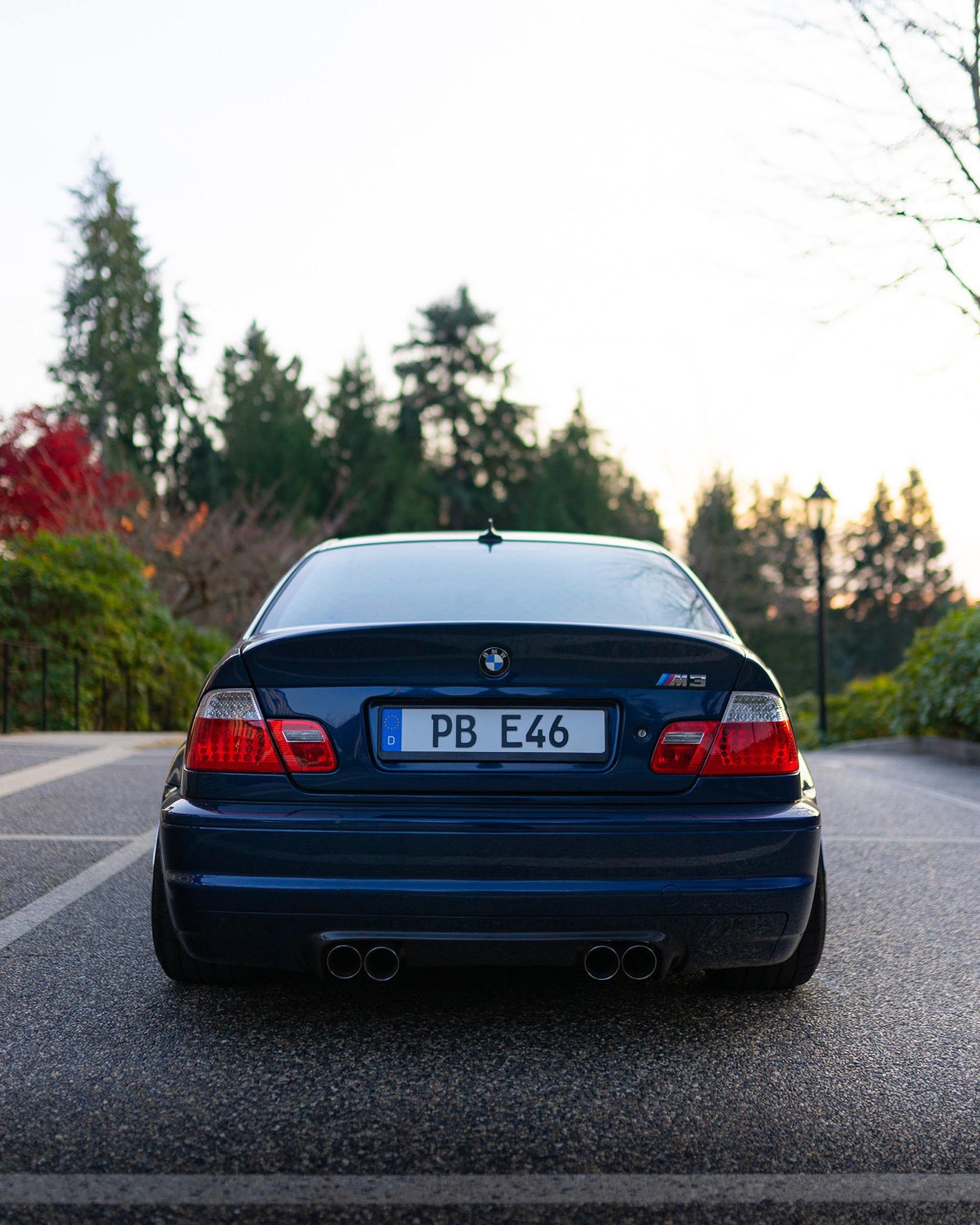 If you want to read more BMW features like this one, you can find them on our BMW hub at bmw.fcpeuro.com. 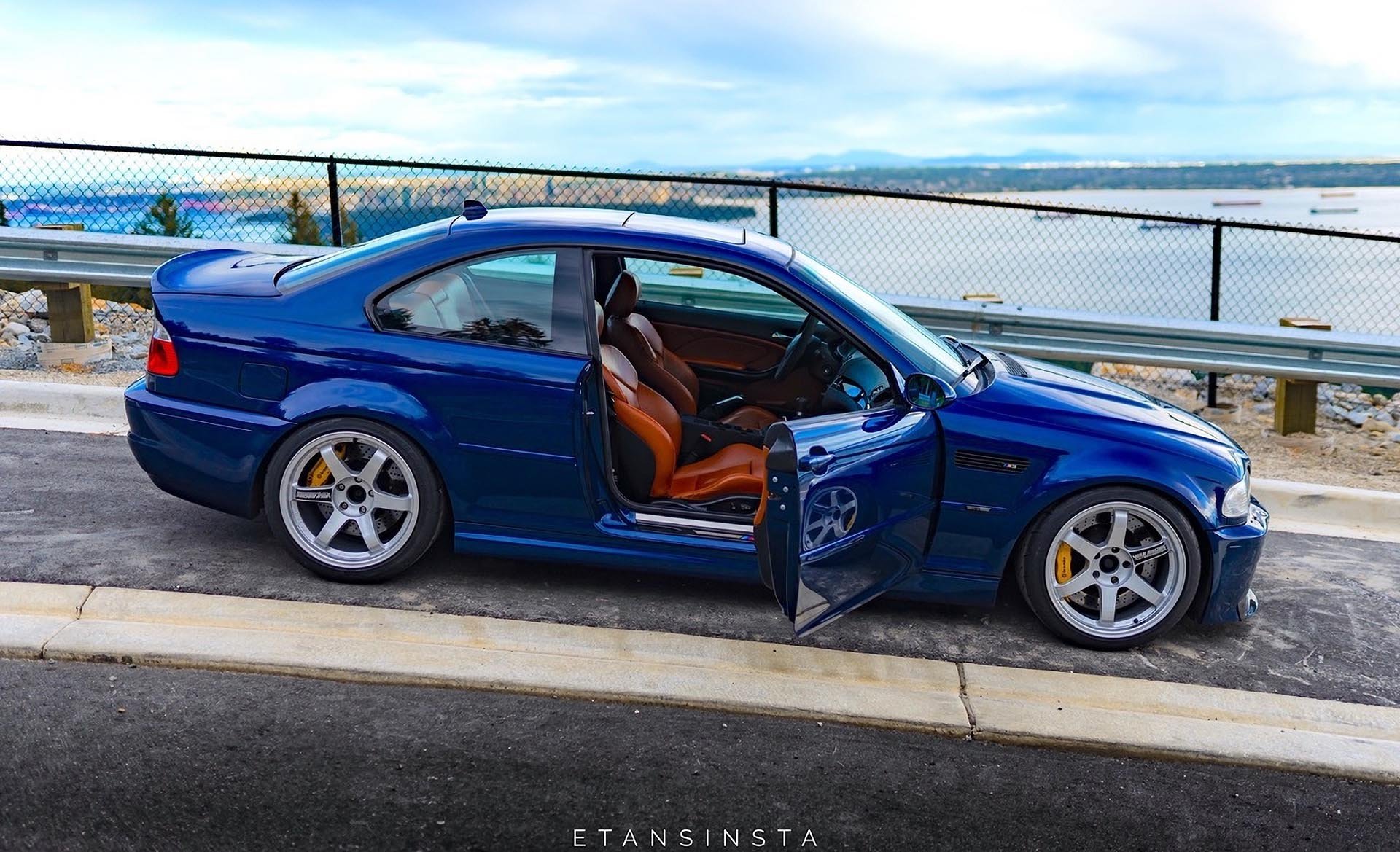 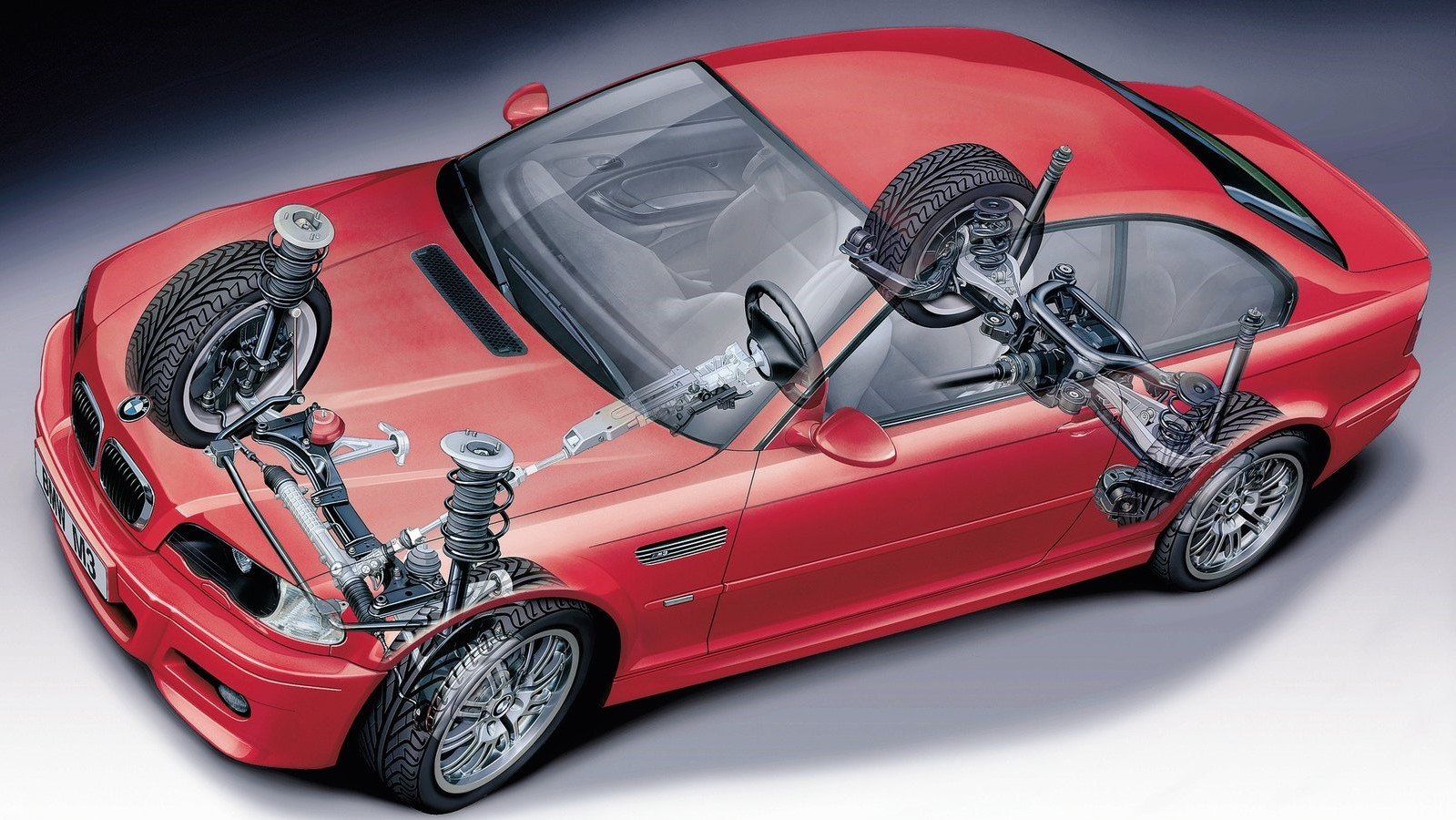 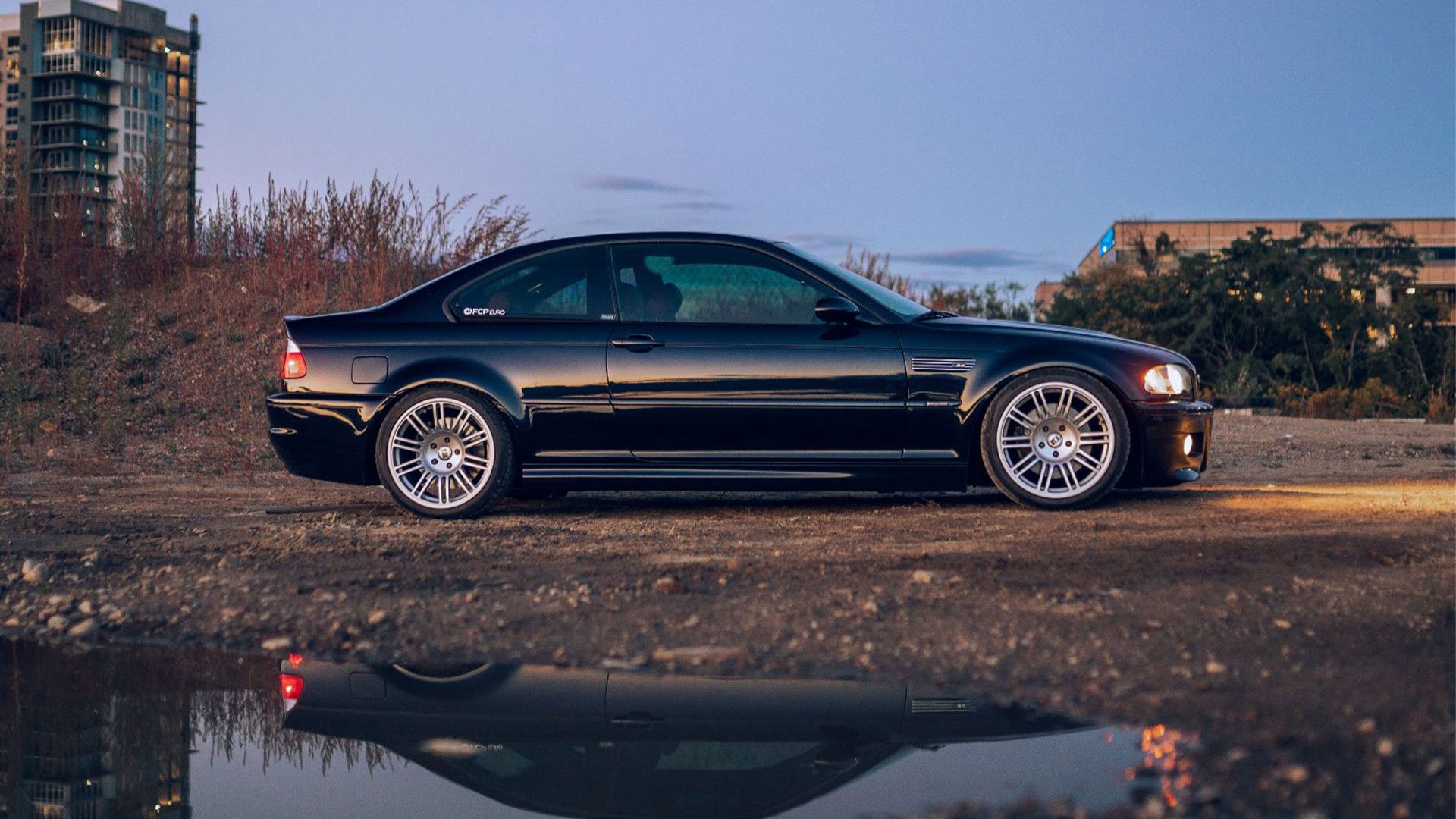 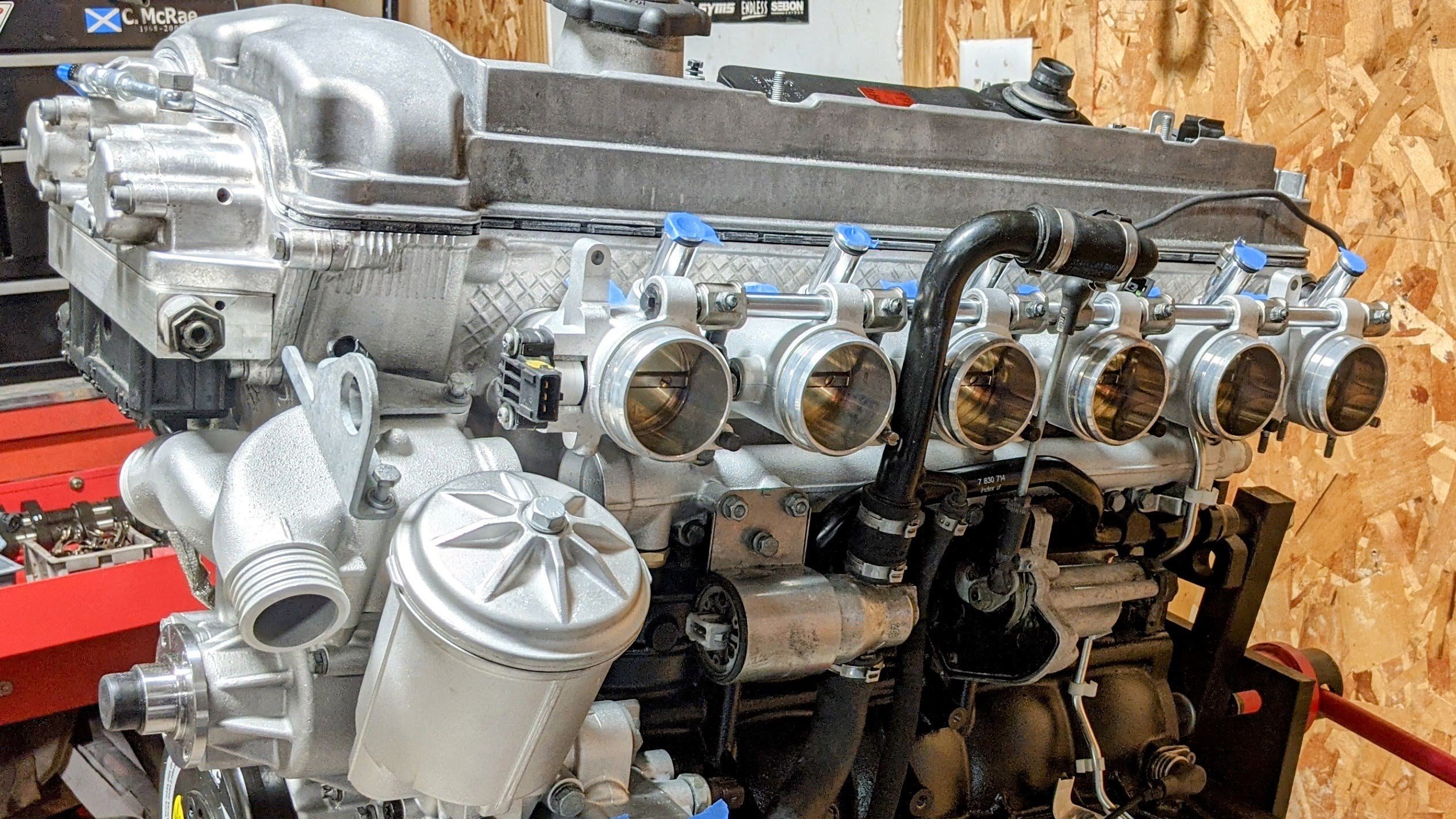