It’s great to catch a build as it’s happening and admire its direction. With this BMW E30 318i sedan, we can’t help but admire its garage-built roots.

At first, Dustin Heffington didn’t want us to feature his E30 sedan because it wasn’t ready yet in his eyes, but we just had to present this attention grabbing car to our readers. It’s far more than just a slammed and cambered out E30. Much of the work you see here has been done by Dustin himself in his garage. “What I feel sets my 318i apart from others is that I have personally done all the fabrication,” he admits, “and I feel I’ve executed it exceptionally for my first time doing anything like it.” 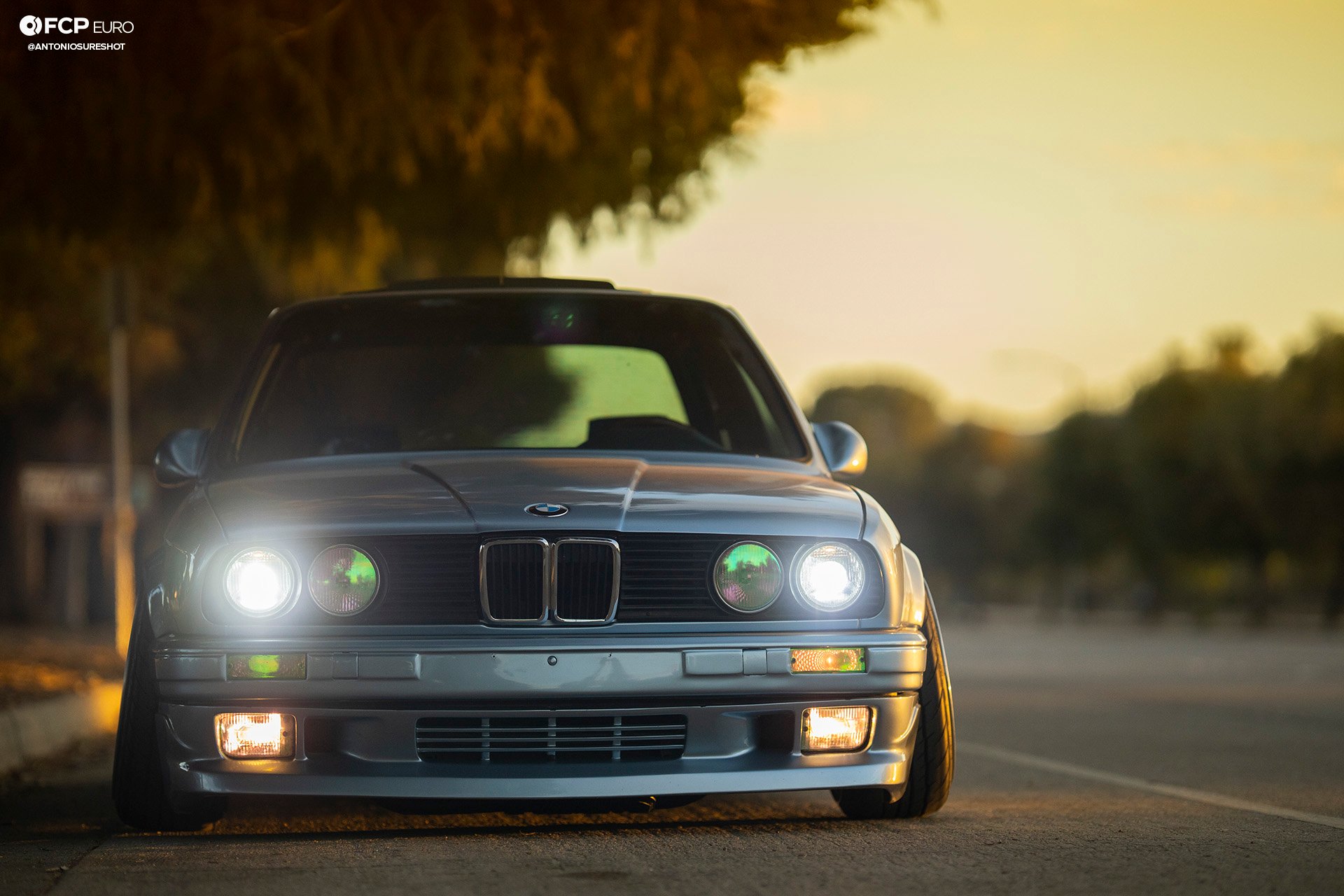 You certainly can’t fault him for being proud of his own work. Dustin’s E30 gets its stance with a set of Broadway static coilovers with 18kg/mm rate springs in the front and 24kg/mm in the rear.

The camber is then set using their adjustable top hats with the addition of a set of E46 front lower control arms. These arms allow for even more negative camber while also running a smaller wheel offset. Inside those control arm rear carriers are Condor Speed Shop ultra-high-molecular-weight (UHMW) polyethylene offset bushings. These UHMW bushings not only work with the E46 arms but allow even more camber and caster adjustment by rotating them in the carrier. 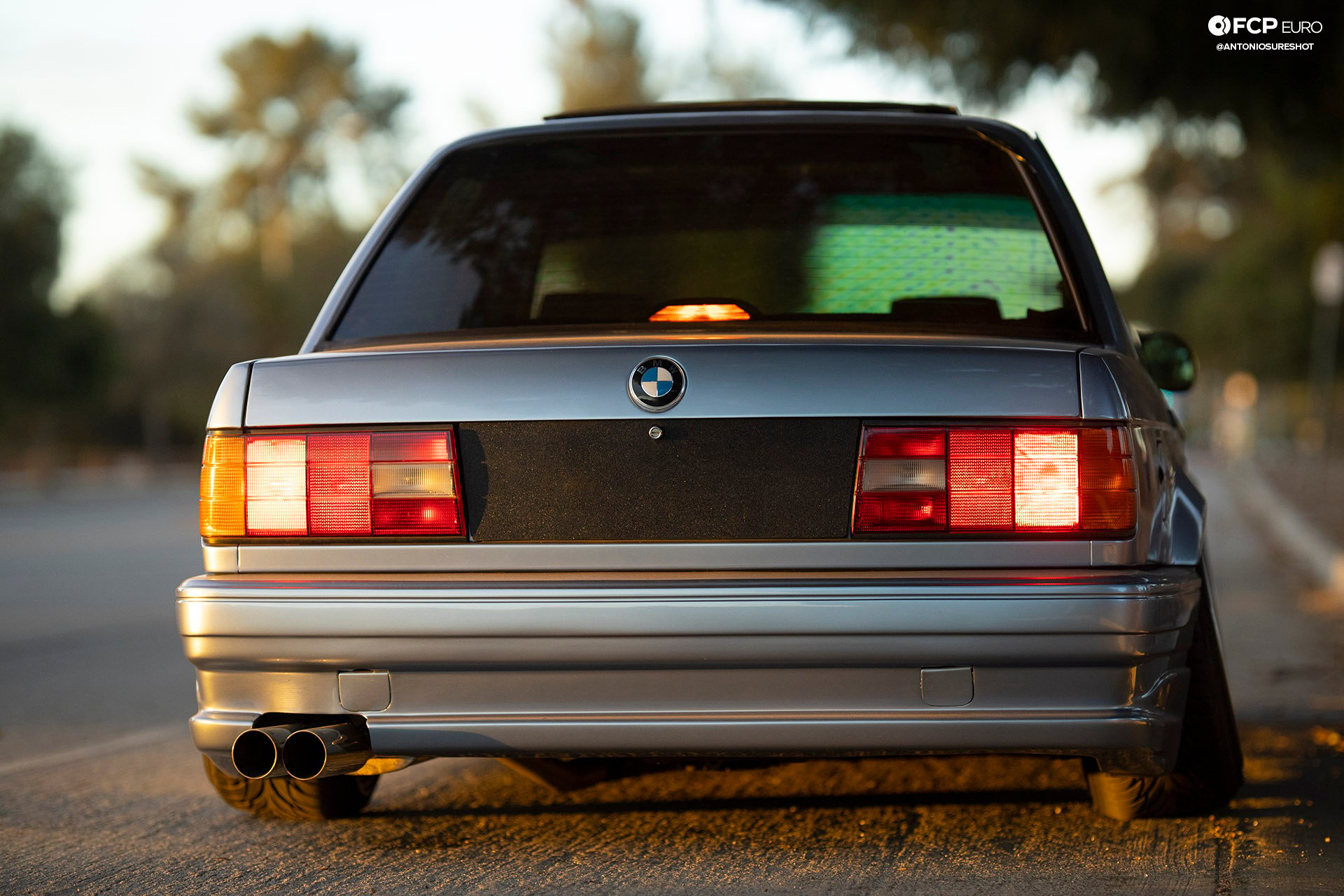 For the rear, a set of Garagistic rear polyurethane subframe and trailing arm bushings stiffen up the suspension movements. To achieve the car's camber settings, a Garagistic camber and toe kit was installed. These brackets are welded on the rear subframe and allow for more adjustment than the stock design allows. Even as a street-driven car, Dustin went with a BMW Z3 limited-slip differential for proper forward traction. 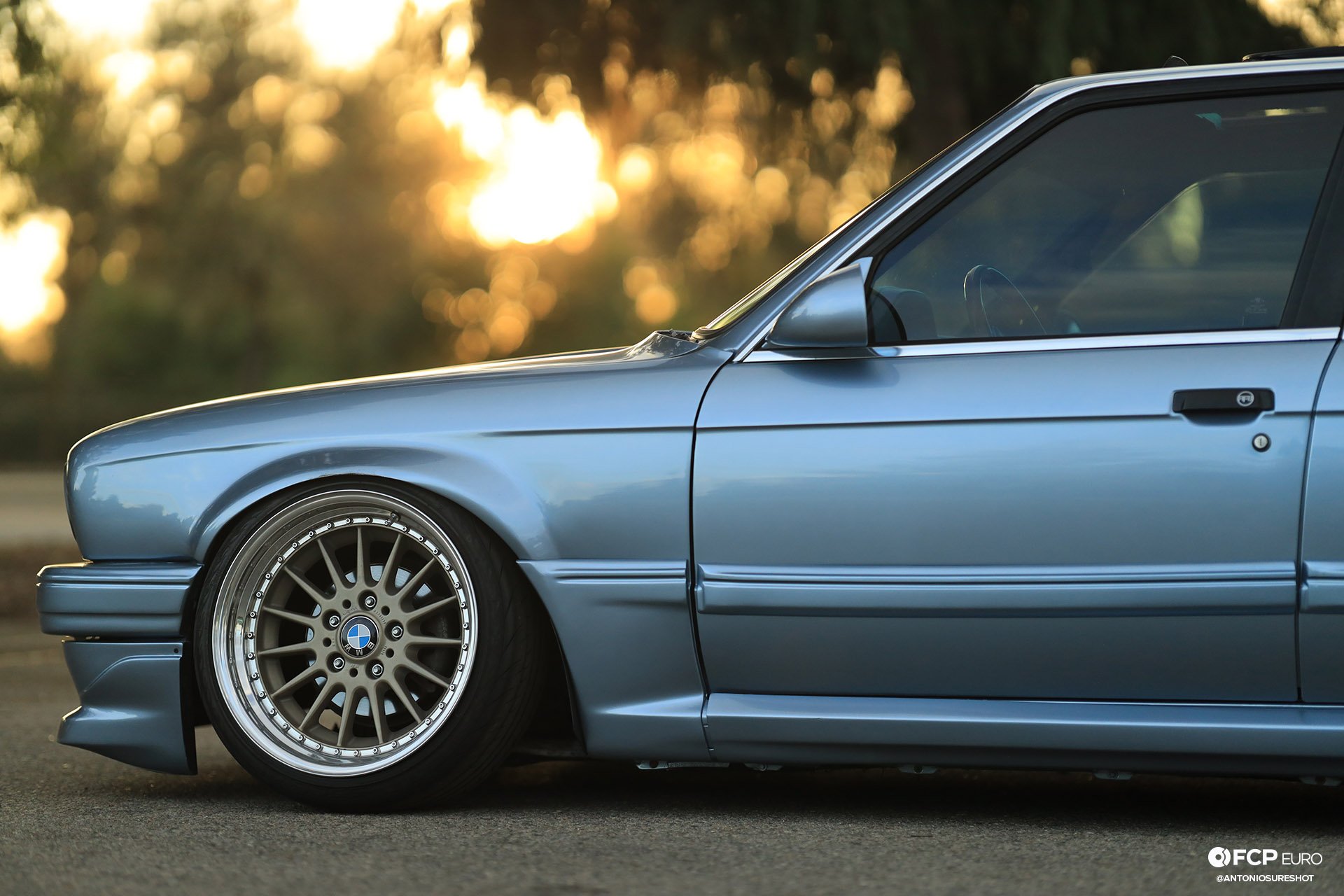 Here are a few of the most interesting details about the car. If you’re an E30 aftermarket accessory nut, you might notice that the car has a complete, real, and very rare Pfeba kit. The front lip, side skirts, and bumper skirt are all there, painted in BMW Liquid Blue Metallic. It’s also a very clean and sedated kit, which is why it’s worth the grab if you can even find it.

One detail that many people may overlook is that the wheel arches are not from an E30, but from an E38 instead. However, they have been blended in with the E30 bodywork and the Pfeba kit so well, it’s very hard to notice the difference. “I was originally going with the E46 M3 fender arch but I wasn’t happy with it,” said Dustin, “So I went with the 7-series arches instead.” 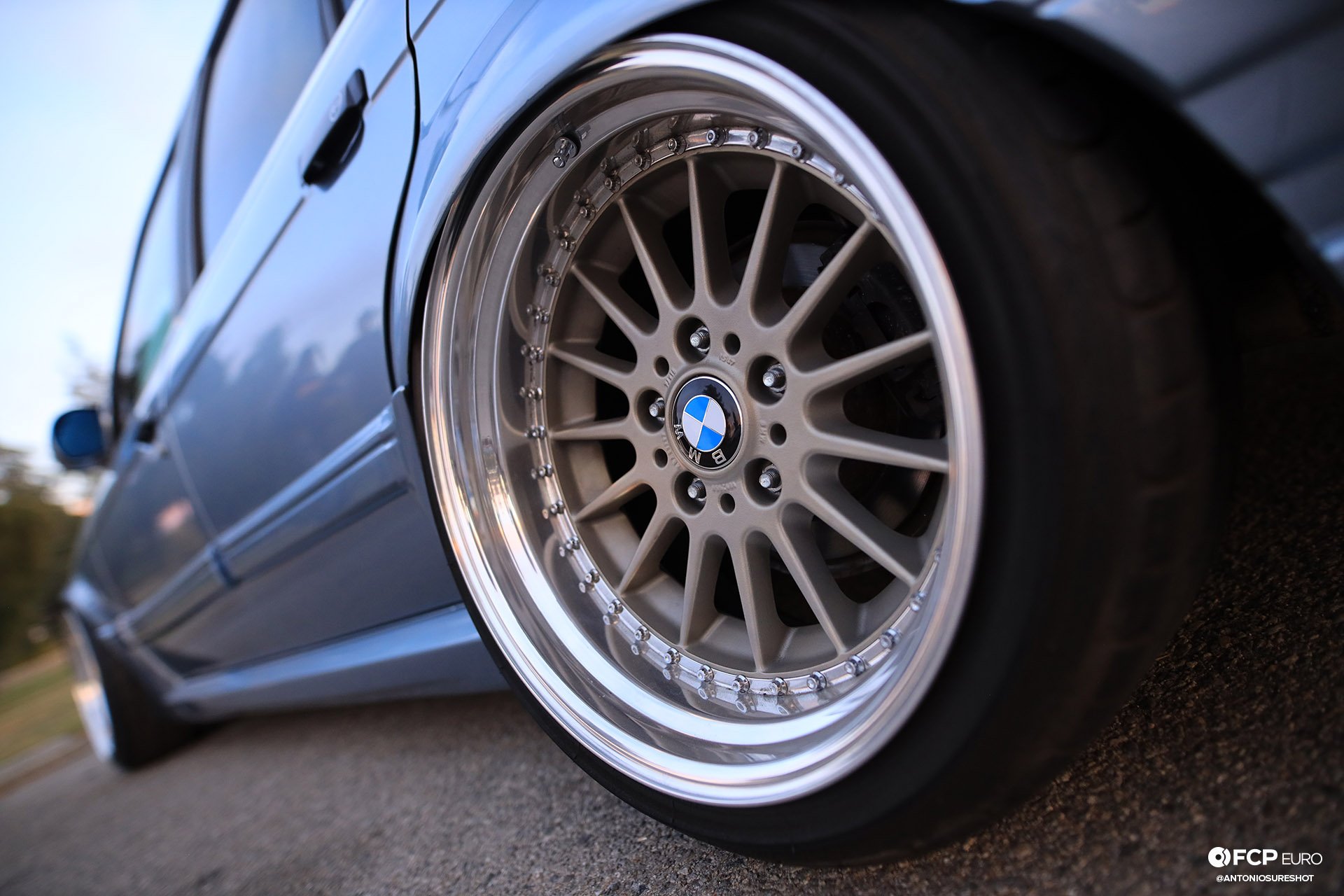 The wheels are a custom set of three-piece wheels that you are not going to find anywhere else. Dustin had these made by a shop in Romania using a factory BMW Style 32 rim from an E36 as the wheel face. From there, they were machined to accept the inner and outer wheel barrels to create a 17x9 -8 front wheel and a 17x10 -10 in the rear. They were then swathed in Federal 595 tires sized in 195/40R17 front and 215/40R17 in the rear. 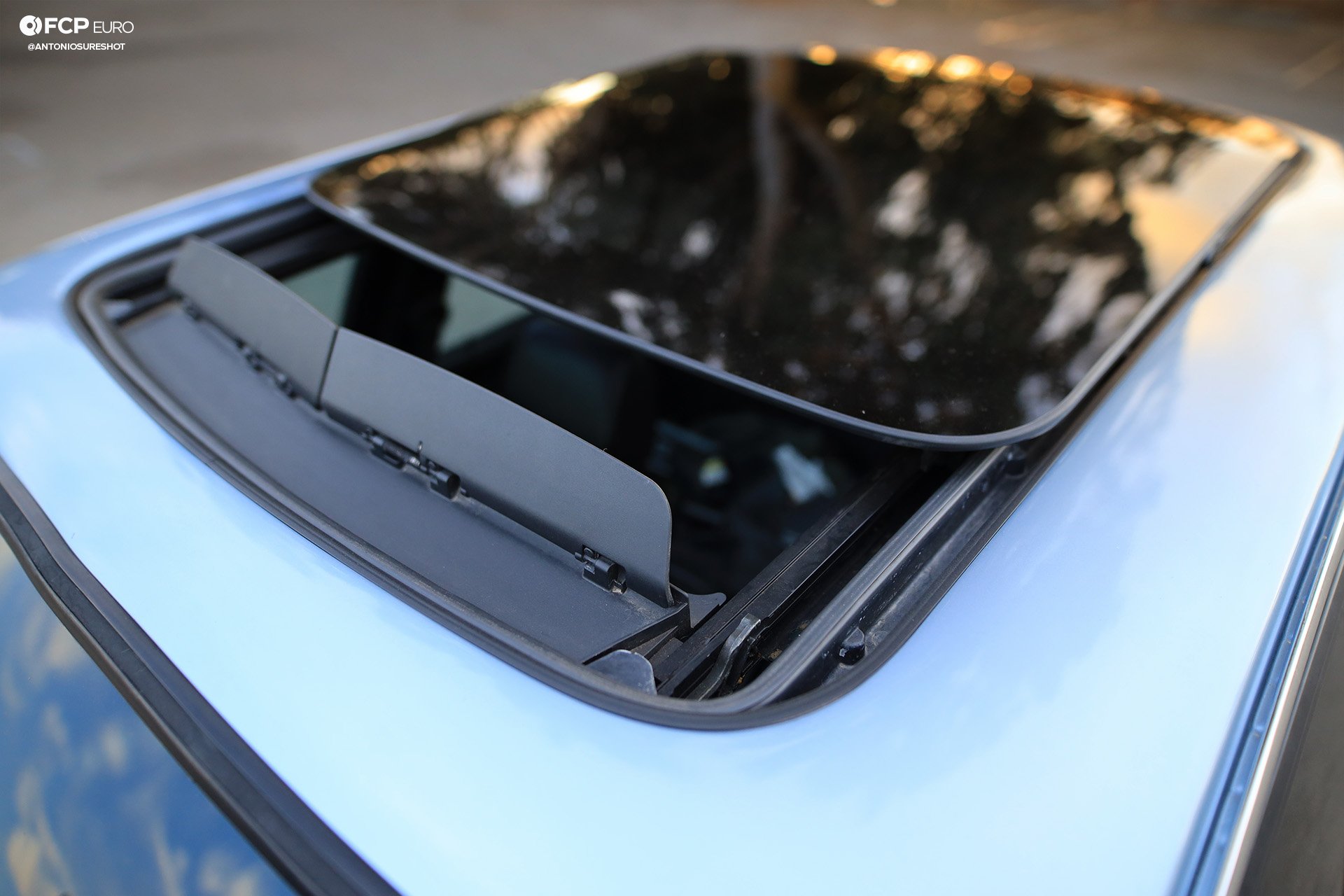 As impressive as the arches and custom-made three-piece wheels are, they pale in comparison to this. Dustin took the panoramic sunroof from a Mini Cooper and grafted it onto the roof of this E30 sedan. From the mechanisms to the gaskets to the windbreaker, it’s a fully functional panoramic roof and the only one we know of in the world. “That day was the scariest part of my life,” said Dustin, “I decided to take a grinder and cut my entire roof out of my favorite car for the panoramic roof, not knowing if it was going to fit or not.”

“I measured it a million times,” he admitted, “but still, the moment I did it, I realized that I had to make this work or buy another E30.” Not only did he make it work, but it also ended up looking like a factory installation. It still needs a headliner, but that is already in the planning stage as we write this story. 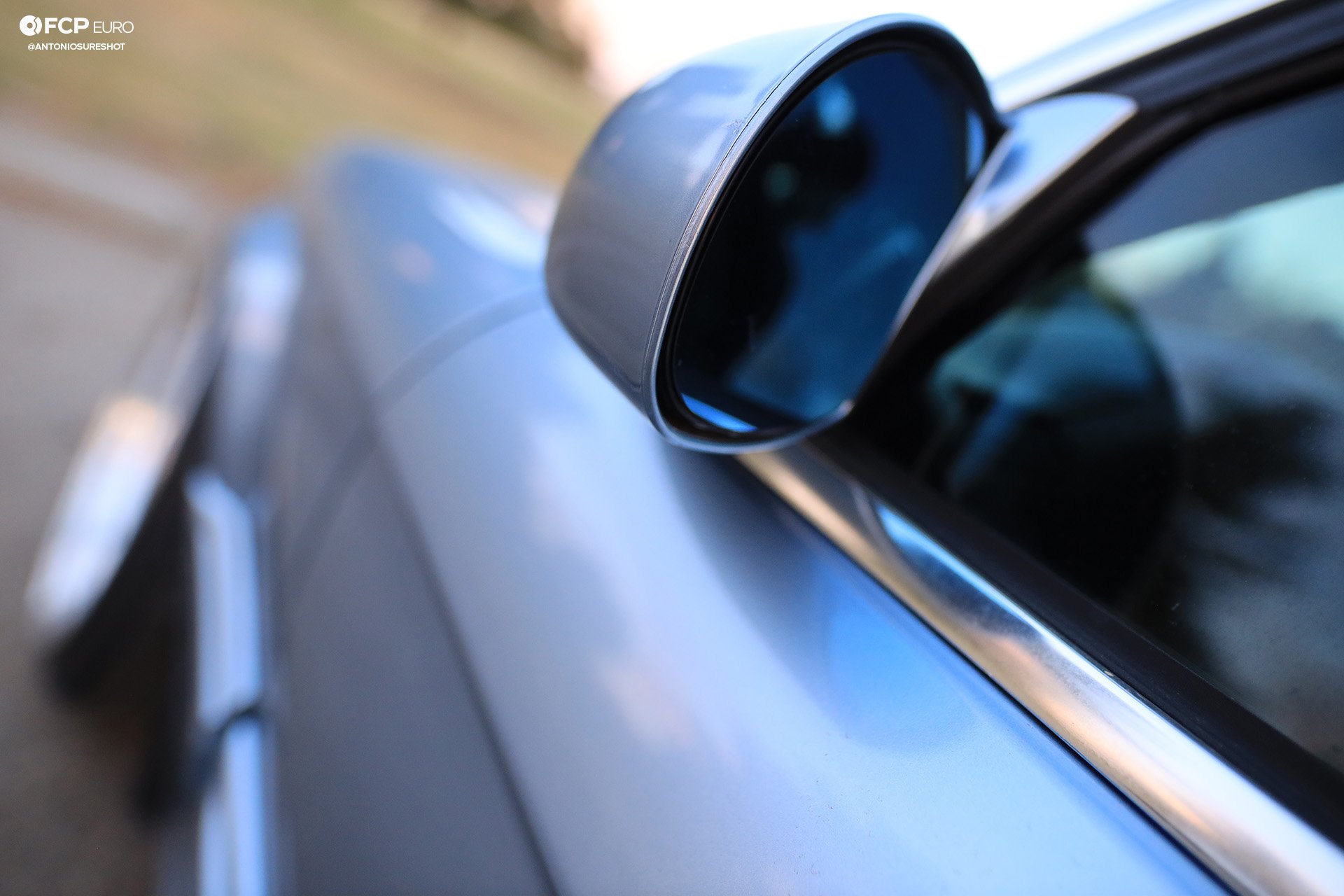 The mirrors are a set of DTM-style parts he picked up from a random online purchase. What makes them interesting is that they are a two-piece design. 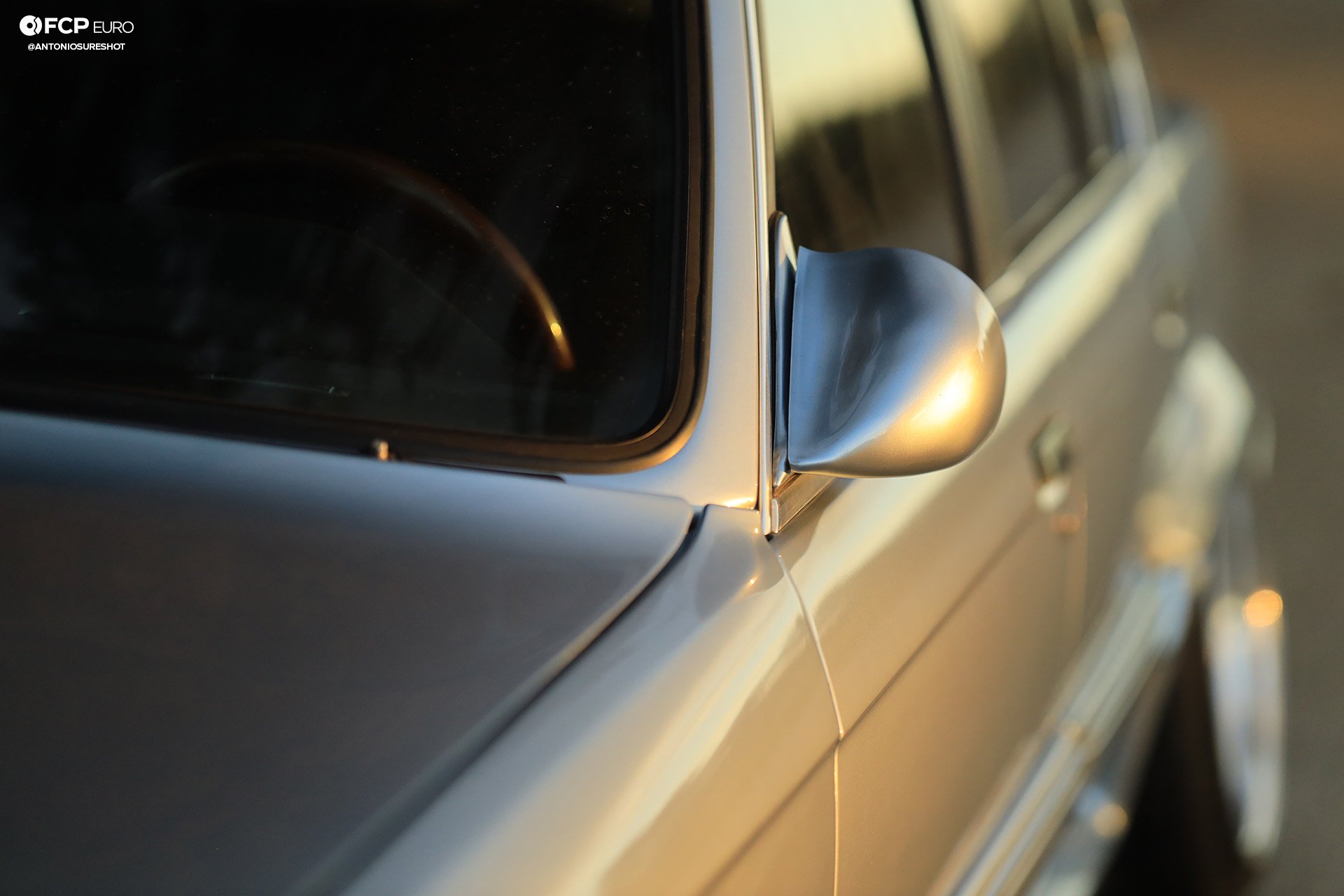 The first piece bolts to the door frame while the rest of the mirror assembly attaches to that. 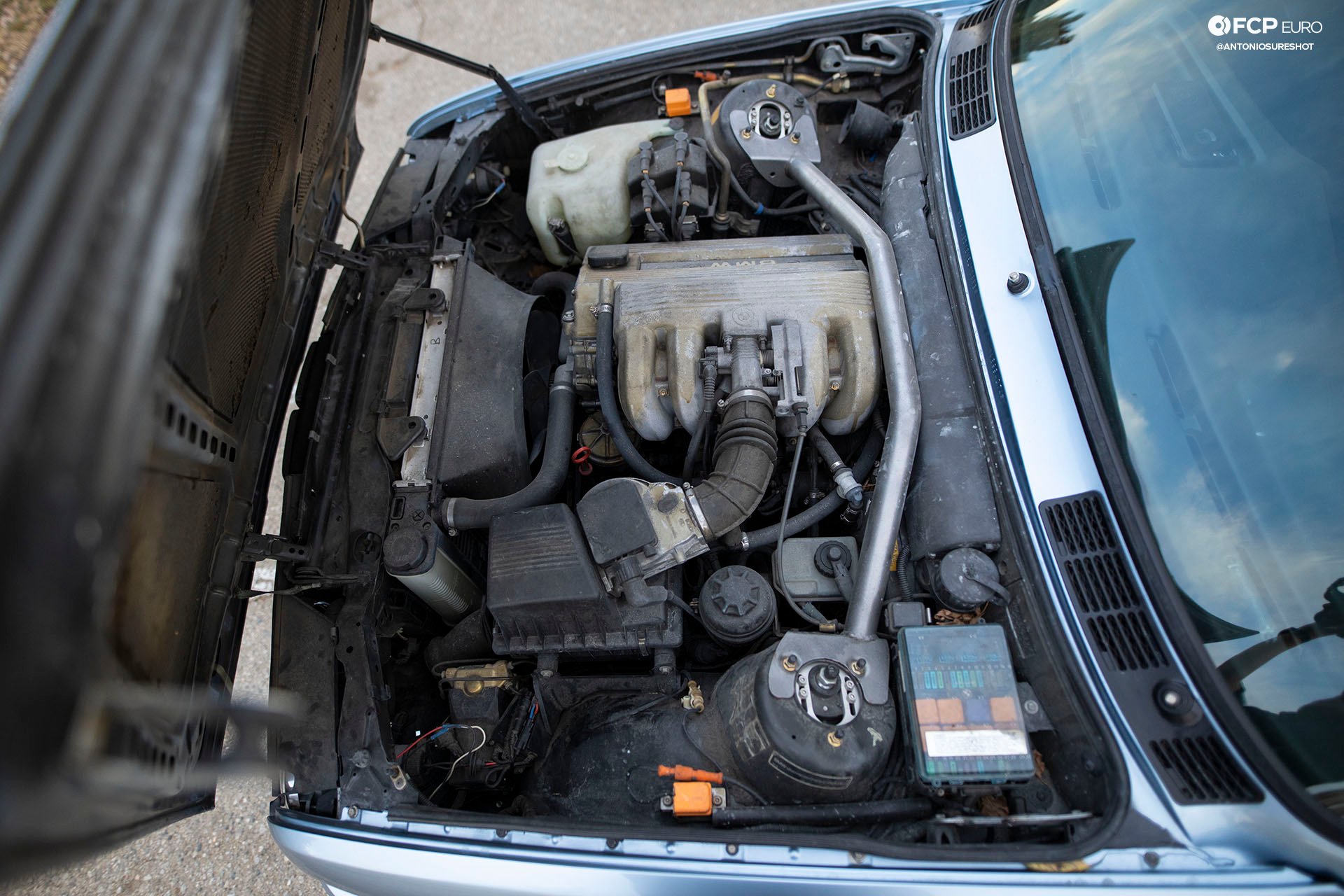 Under the hood, you’ll find the original M42 engine with no work done to it (yet). Many people are quick to get rid of this 1.8-liter as everyone wants the M20 or any of BMW’s other selections of inline-6 powerplants. However, this engine is great for a daily driver and it was the base of the S42B20 – the racing variant used in the BMW 320 Super Tourenwagen Cup. It would be great to see one of these built up to similar specifications, but it would require some head work to get it to Super Tourenwagen Cup level. 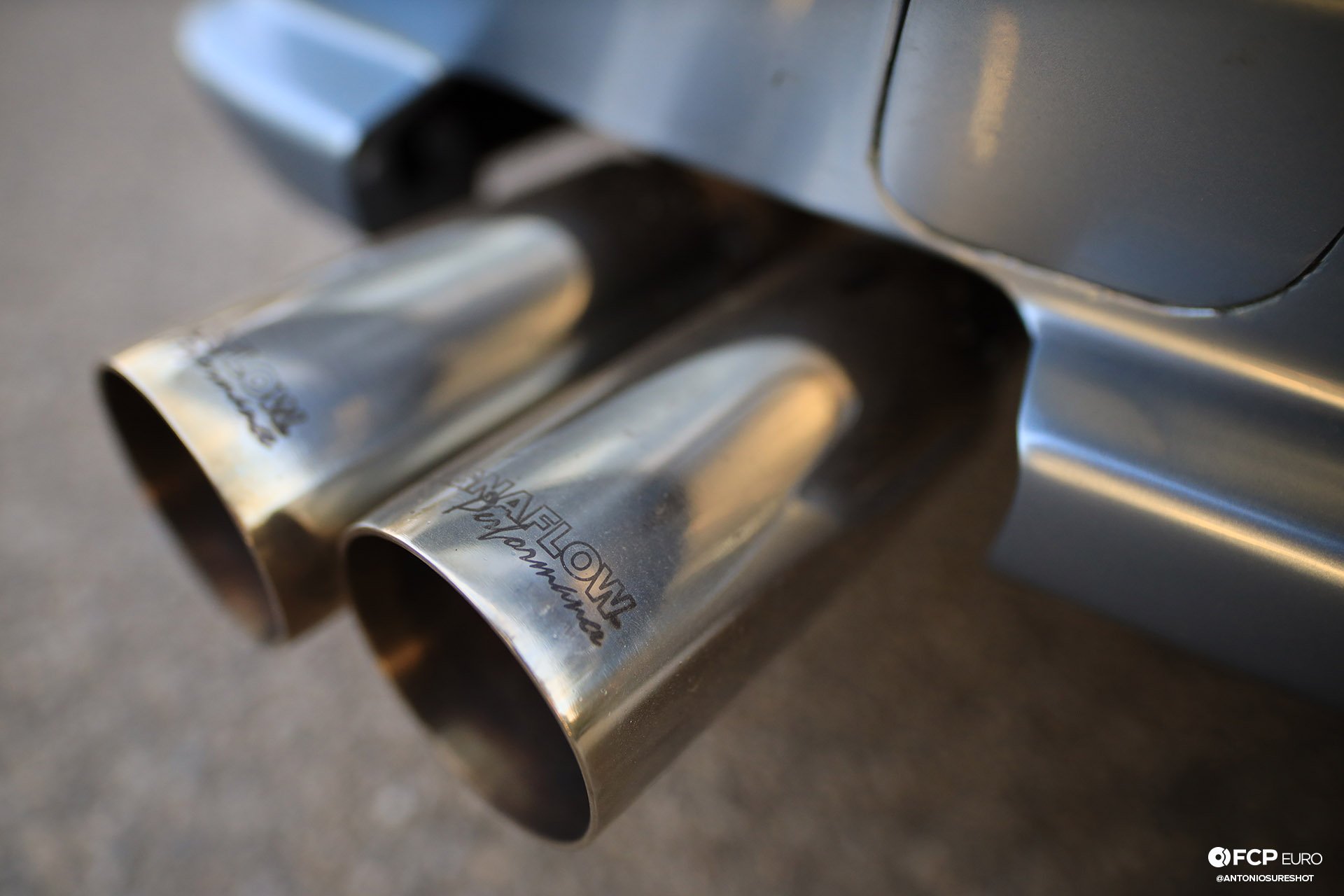 This leads out to a Magnaflow Performance muffler with dual stainless tips, helping improve the sound of the 1.8-liter engine, while grabbing attention as it sticks out of the rear bumper. 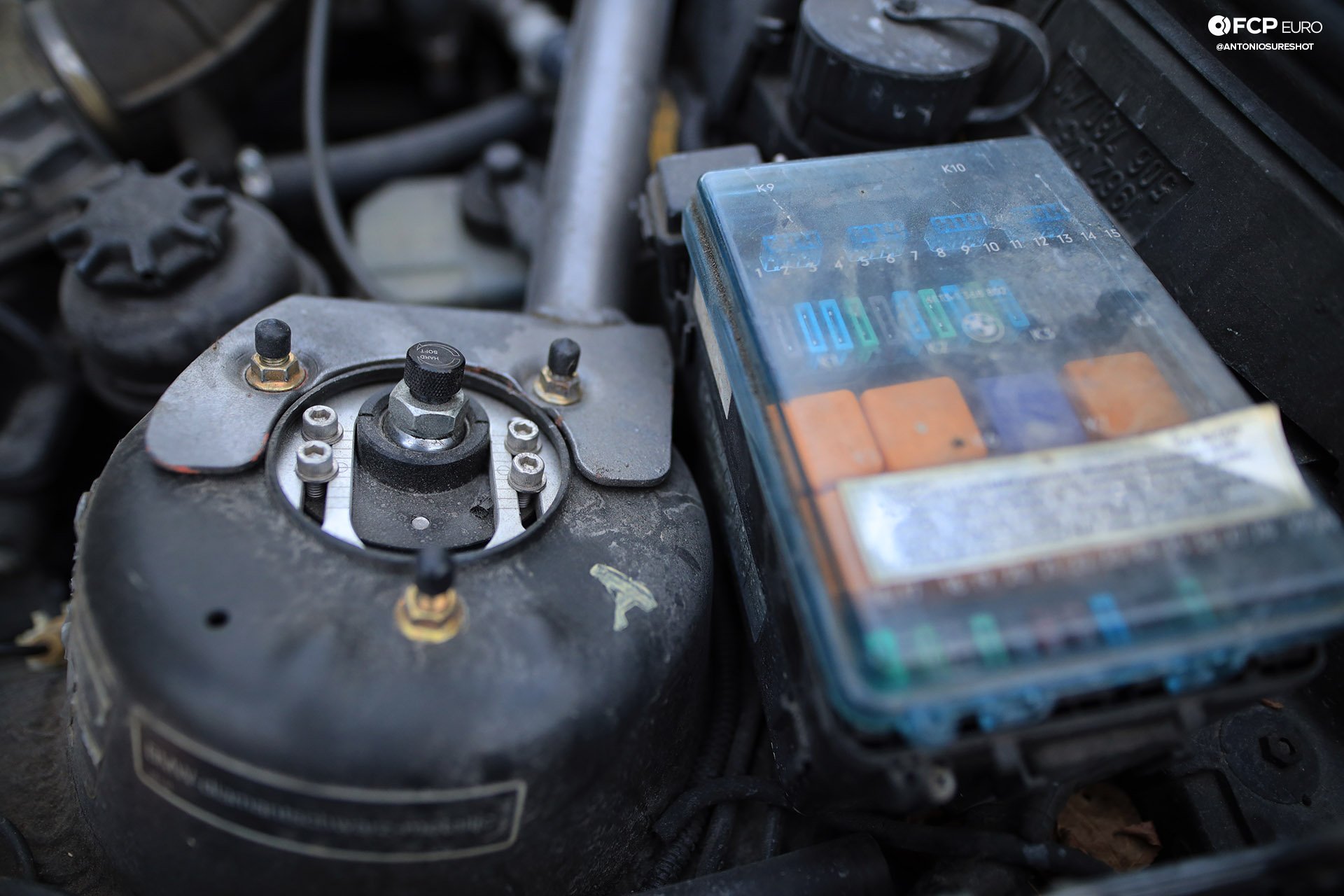 Both the front strut towers and rear shock towers are tied together with Garagistic Tower Bars. You can also see the adjustable strut mounts of the Broadway coilovers. 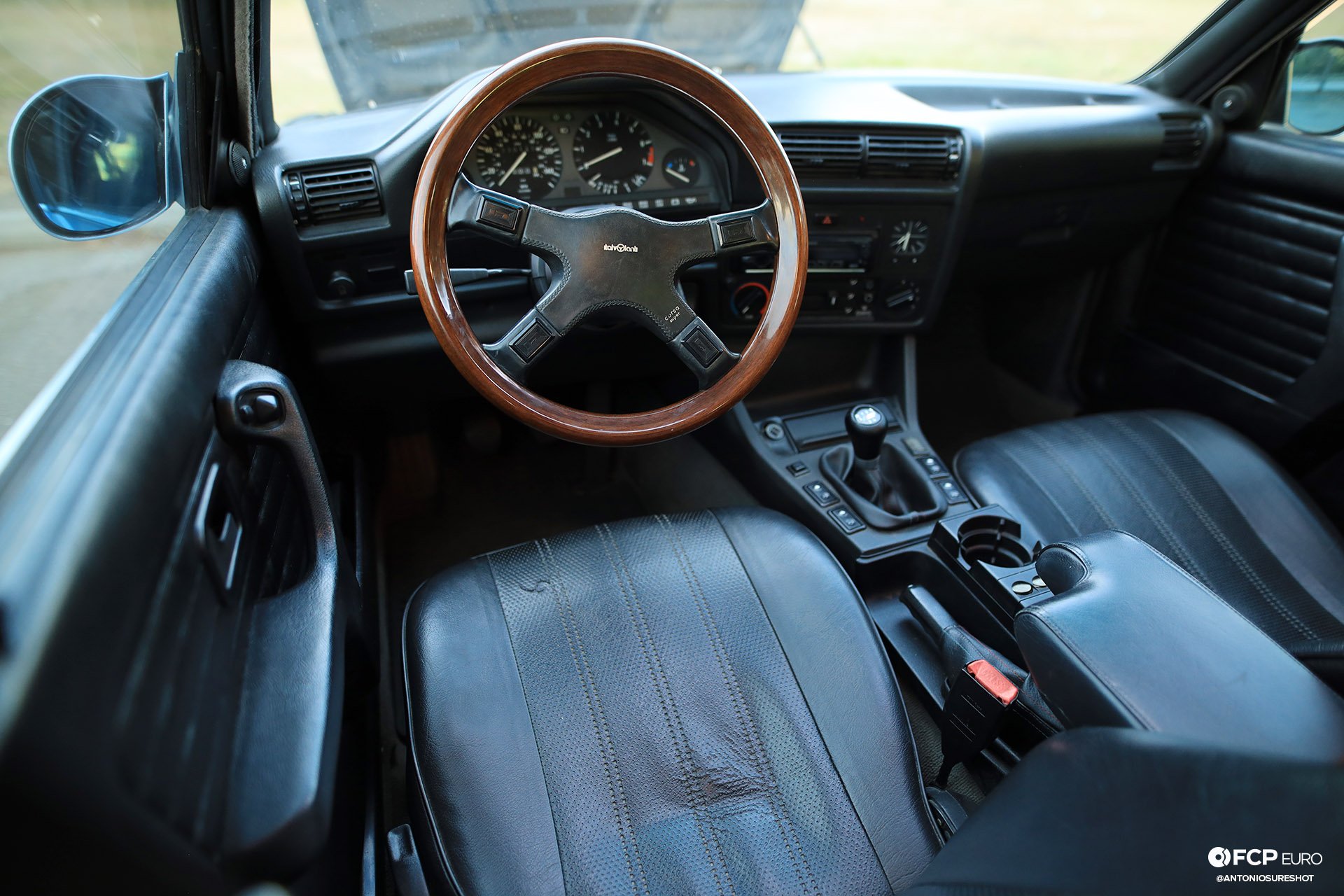 Much of the interior is still stock, including the comfort seats, but there are some interesting touches here. First is that Italvolante four-spoke wood grain steering wheel. It’s attached to the steering shaft by a quick release hub that is color-matched to the Style 32 wheel faces. A Kenwood head unit sends musical signals to a Zapco amplifier. Once those signals are boosted, they come out as sound through a set of JL speakers residing in the doors. 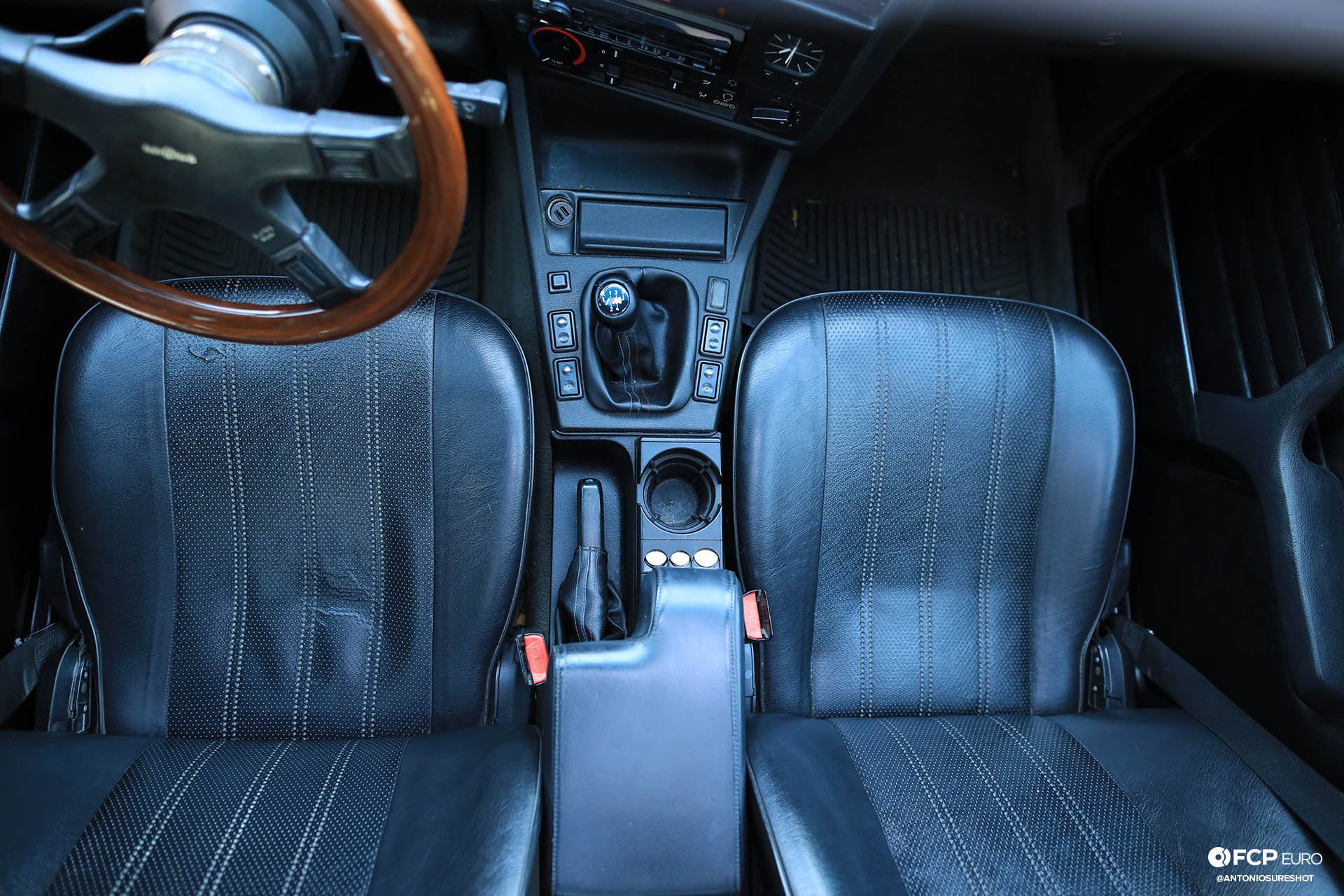 Thanks to the panoramic roof, we can point out that the center console isn’t from an E30. It is sourced out of a BMW E36 and even came with its window switches. It also gives the driver and front passenger a real center armrest rather than nothing at all. It also gives you a real cup holder rather than adapting a set to work with the front well pocket under the HVAC controls. Again, fits in rather well and looks like it was done that way from the factory. Even the shifter location is correct. 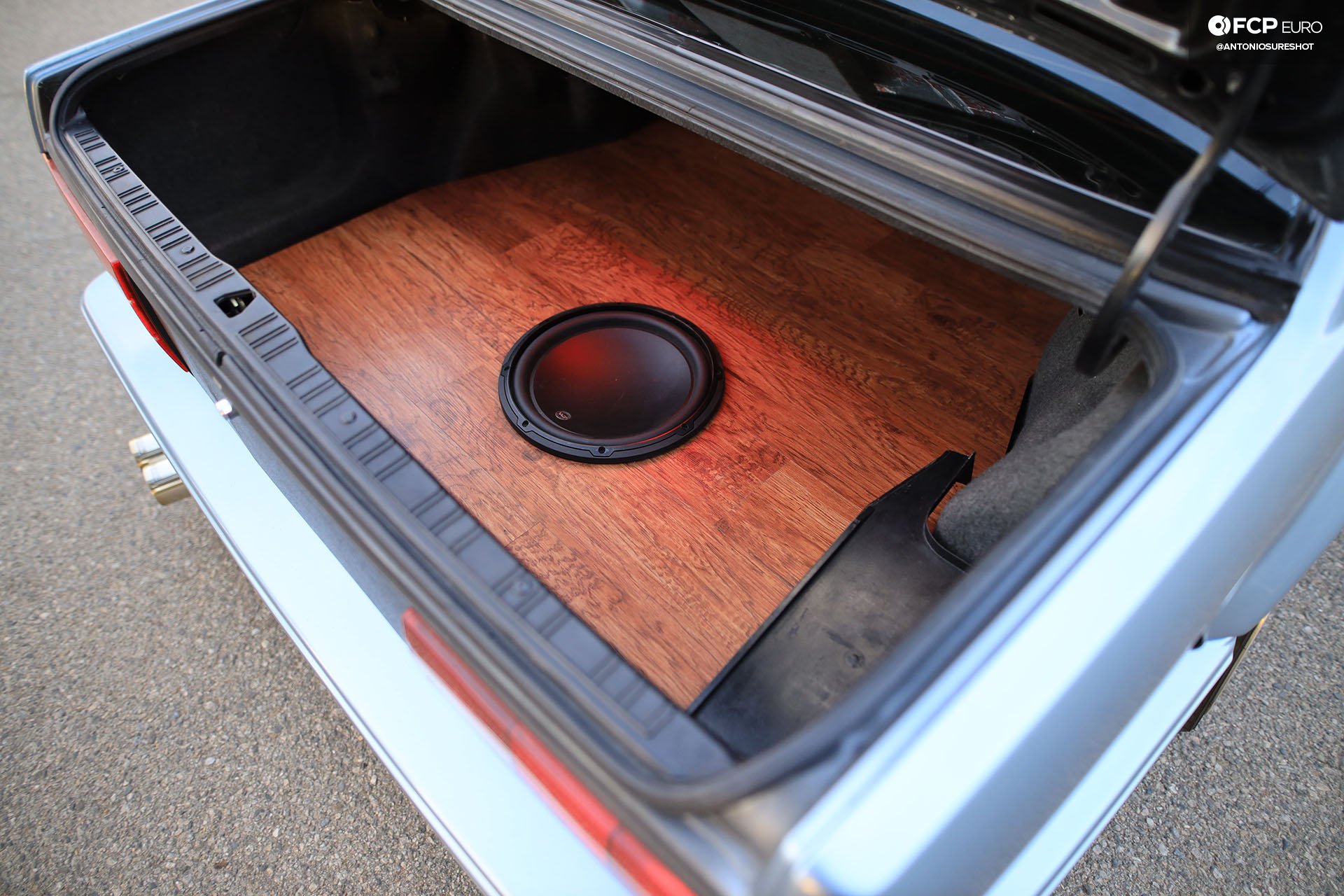 In the trunk, you’ll find that carpet is gone and in its place is wood paneling. This gives the JL Audio W3 12-inch subwoofer a place to live, but it doesn’t look cluttered or take up as much trunk space as a subwoofer box or tube would have. 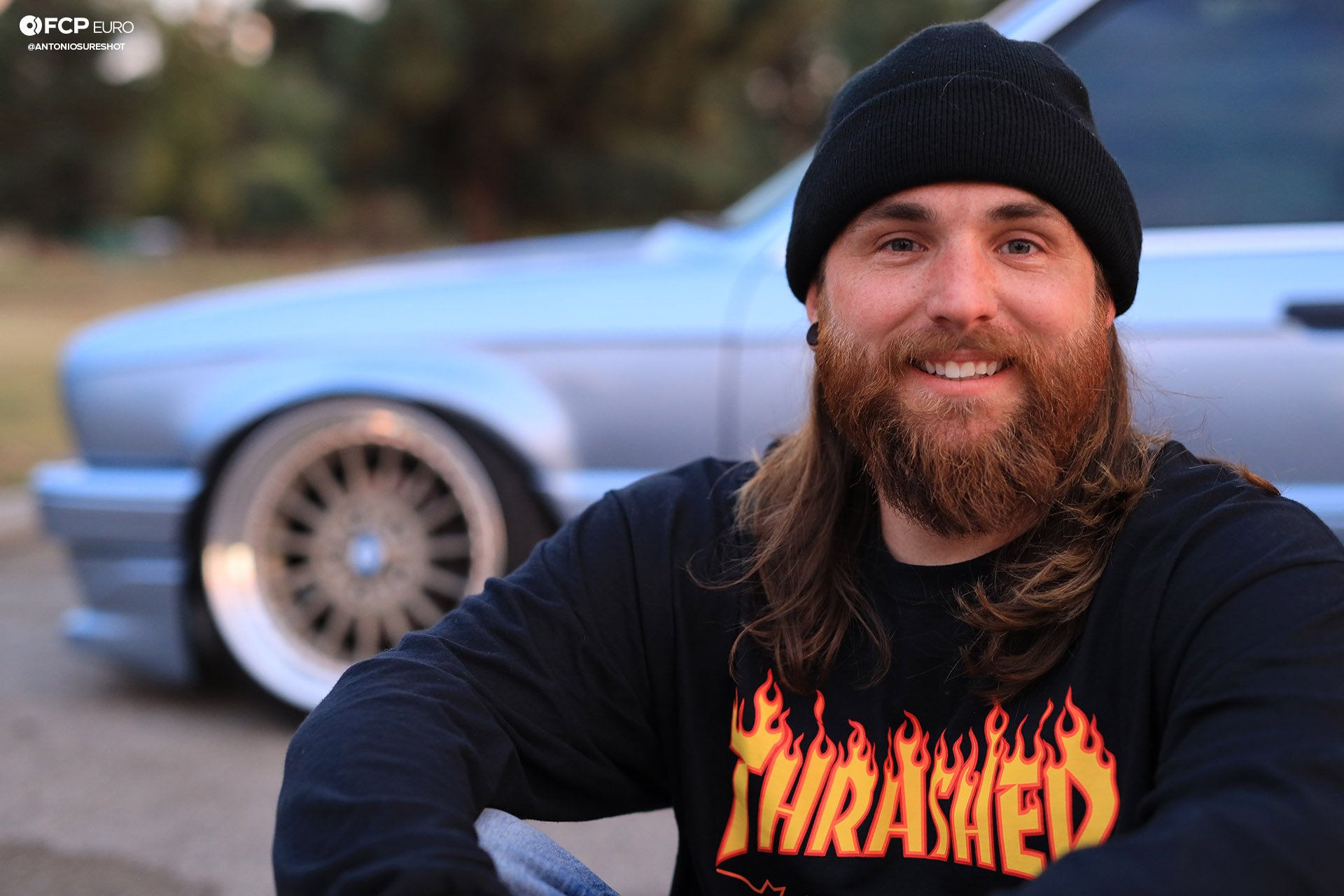 “When I originally bought the car, my goal was to just slam it and put the BMW Style 32 rims on,” said Dustin, “When you have a specific vision for your car, I believe it’s best to do it yourself.” Considering that he did everything except the paint and the three-piece wheels in his garage, we have to say this was well executed. “I had planned this in my head for over ten months, then got it done in one month,” he said, “The moment I saw my car after I got it all back together from the paint shop, I was extremely proud of the outcome.” 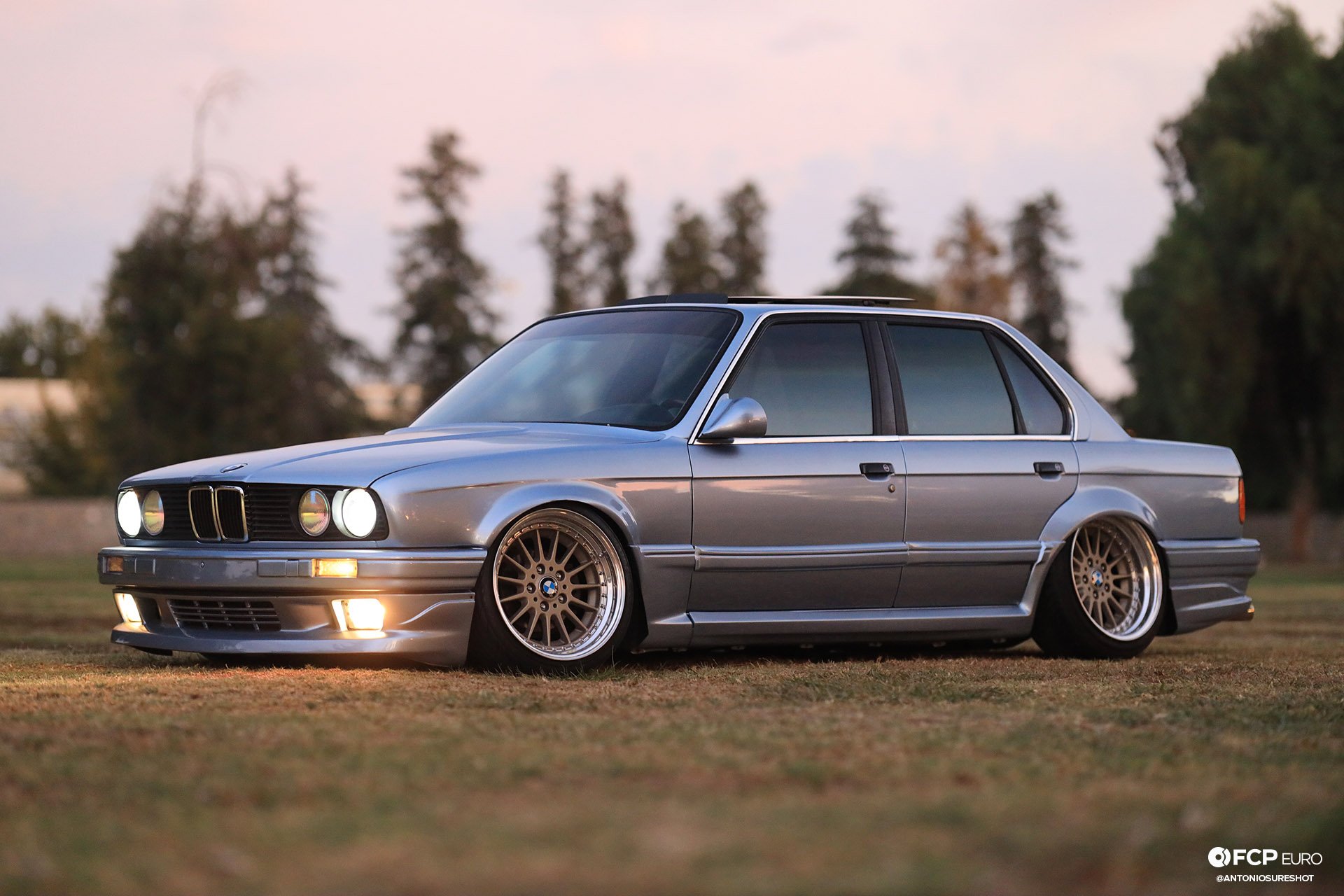 “Anyone can bolt-on aftermarket parts,” says Dustin, “but having an idea that has never been done and the courage to execute it yourself is art to me.” It’s that strong do-it-yourself attitude that made this car happen. “Things may not turn out exactly perfect,” Dustin points out, “but the pride of saying you did something yourself is out of this world.” If anything, being slightly imperfect is a sort of perfection. It adds character and definition to the build. We’re not saying bad welds, off-center parts, or orange peel paint are good. Rather, those touches that allow others to realize that this was handcrafted are beautiful.

Going further, it’s amazing to witness what someone with a passion can do when they do execute a plan well. It’s proof you don’t have to do this for a living. It shows that being able to make a car look like Dustin’s E30 takes more than skill and a shop full of employees. It takes dedication beyond enthusiastic ownership, confidence in what you’ve designed, and implementation without hesitation.

If you like this BMW E30, you can find additional BMW-related content at bmw.fcpeuro.com, as well as more build features like this one, here. If there's anything specific you would like to see, or if you have any questions/comments, leave them in the comments section below.