FCP Euro is at Gingerman raceway for the GRIDLIFE MidWest Festival. There's drifting, time attack, concerts, wheel-to-wheel racing, and even Japanese-inspired Touge battles with our VW GTI TCRs and Honda Civic Type-R TCRs. Here's everything you need to know about what the team is up to and where we'll be throughout the weekend.

I honestly don't know where to begin. This is a long update, quite possibly the lengthiest one I've put together in my time at FCP Euro, and I've still left a bunch out. Simply put, this was the biggest, craziest, jam-packed event FCP Euro has ever attended. Some of the biggest influencers, teams, and more importantly, a massive portion of our customer base now know and understand who FCP Euro is because of this event. This skeleton FCP Euro crew who came into this event not knowing what to expect have overcome weather, mechanical failures, and problem-solved to ensure the event's success. There is so much to mention. Let's start from the beginning, I guess? Yeah. Here we go:

Everyone was at the damp, chilly, track by 7:30am. The drivers, Ben Marouski, Denis Ivanov, Michael Hurczyn, and Nate Vincent all had a meeting at 8am. The content team comprised of Evan Madore, Ethan Roy, and I rigged up Dapper Drift, the Mercedes C300, and the twin GTI TCRs with cameras and audio equipment to prepare for the ridealongs at 9am. Meanwhile, the events team of Ken Whiting, Jess Raison, and Nathan Brown built the partner wall, the event booth, and prepared for the massive hoards of people to come later on in the day. Gareth Foley, our car whisperer, did his usual pomp and circumstance to prepare all five cars for a day of track use. 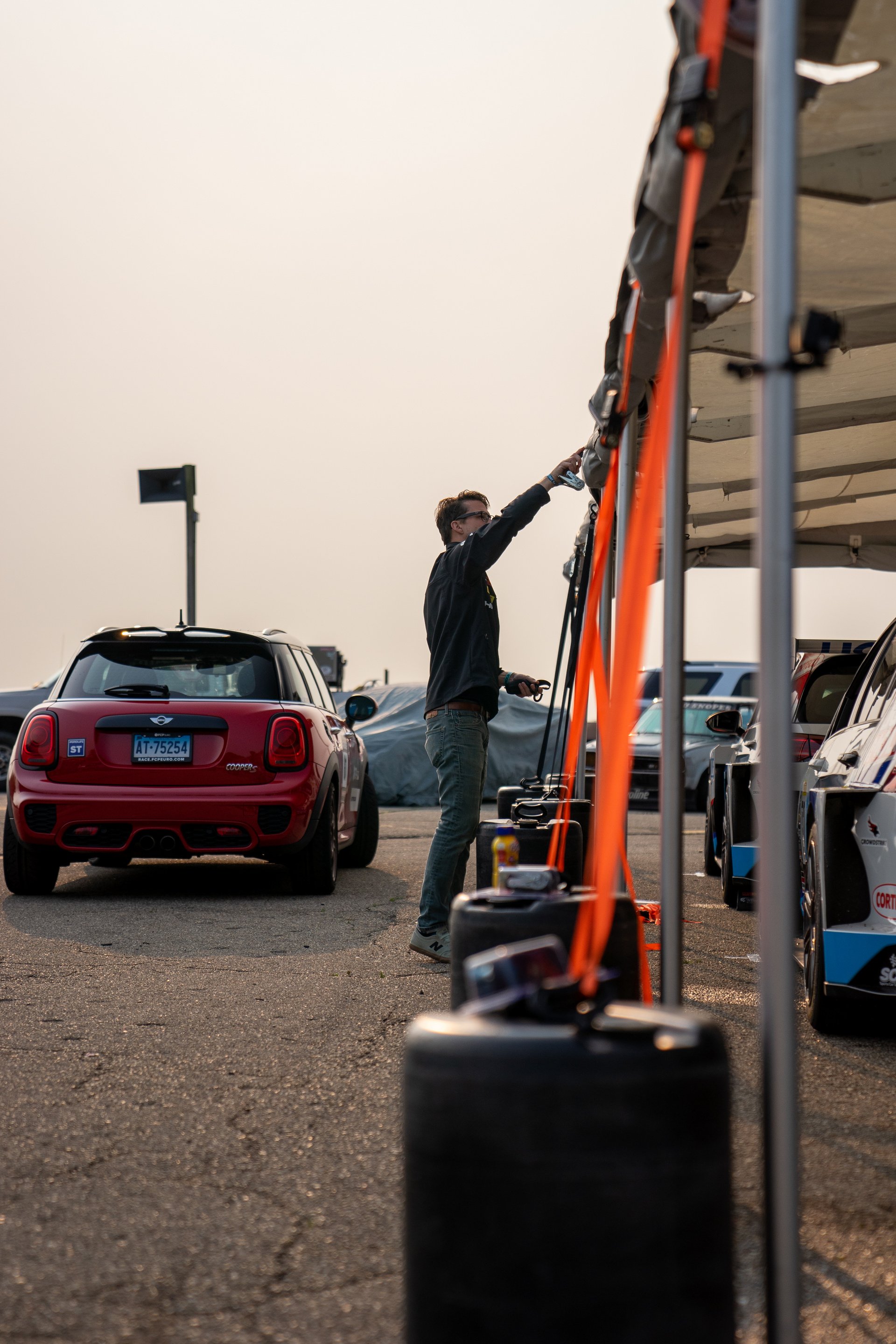 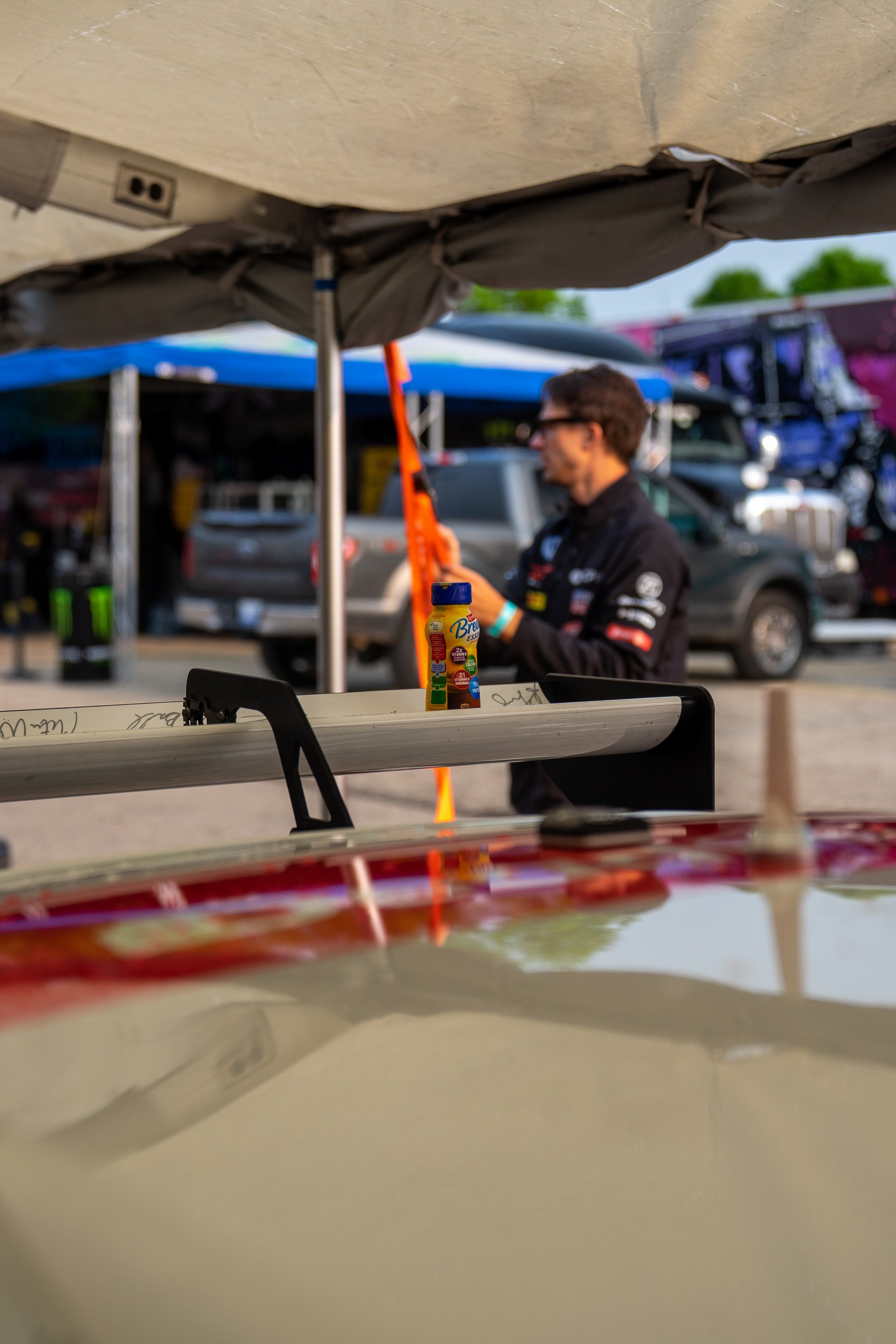 From 9am until 2:30 or so, it was non-stop. The foot traffic to the booth was more than we had ever seen before. We advertised ride-alongs on social media and had to pull back on it because there was so much interest. We had over 50 people get in the cars throughout the day. Michael and Nate would get out of the TCRs and immediately hop into the C300 and MK7 GTI. Denis had lines of people waiting for a chance to ride in the drift pickle. I cannot stress enough how non-stop it was. The interest in the company, the motorsports program, and the general good vibes across the entire event were completely overwhelming. We have never seen anything like this before from an events standpoint. The amount of customers in the paddock who came up to us and were happy to let us know that they just had parts overnighted to the track was unexpected and amazing. 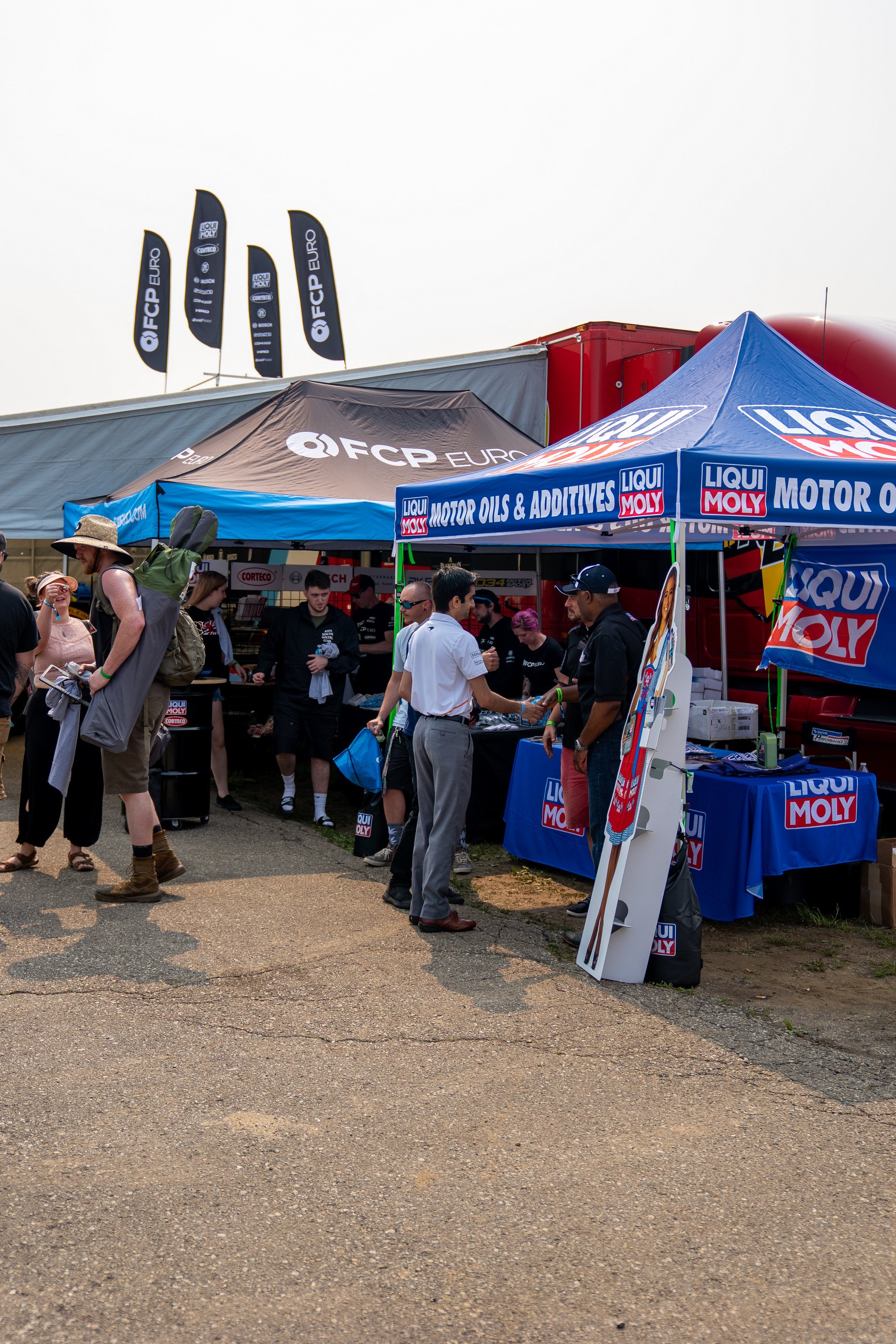 To get an inside look at the theoretical mountain Gareth Foley had to climb on Friday, we typically have 3-5 crew members service our two Volkswagen GTI TCRs during a race weekend. With five cars running, Gareth did all of it. And boy, was he was busy. Dapper drift blew through a set of tires and we hot-swapped them during a session as to not decline any fans interested in participating in a ridealong. The C300 had cooling issues with the radiator fan which was quickly alleviated via clever wiring. The TCRs needed new rubber so Gareth found a trailer with a tire-changer and did it on the spot. The #71 GTI TCR had an exhaust mount come loose nearly melting a small portion of the bumper, saved by a routine nut-and-bolt.

In the case of Dapper Drift, we had an issue that really shouldn't have been one. During a ridealong, Denis went slightly off the track and had to wait until cars passed him safely re-enter the track. During that short amount of time, because the car/brakes were hot, and because there was dry, dead grass underneath it, the grass caught fire and burned the corner of the vehicle. Matt Field, (yes, that Matt Field) spotted the flames, ripped his handbrake, as if he wasn't already, grabbed his fire extinguisher, and ran to help put out the fire. After a short wait, safety workers showed up to make sure everyone was safe and towed the car back to the paddock. From there, Gareth then helped Denis troubleshoot and repair the car throughout the afternoon. There was so much interest in the car that even fans came to help out, some were even professional automotive electricians to help re-wire some of the damaged components.

Since GRIDLIFE brings so many diverse groups of automotive enthusiasts, we happened to be positioned in the paddock right across from Falken Tire and Vaughn Gittin Jr of the drifting fame. These guys know how to draw a crowd and we immediately vibed with their team, their fans, and wound up offering rides to eachother. Michael and Nate rode shotgun with professional drifters Daijiro Yoshihara and Odie Bakchis (check out their instagram follower count) and afterwards, they rode shotgun in the TCRs with Michael and Nate. Both sides had an incredible amount of respect for the cars the teams, the companies, and eachother's programs. The drift guys even admitted (quietly) they like road racing more than drifting itself. I'll admit, it was pretty humbling to have a presence and a program that is in the same paddock as these guys. They're the real deal and are folks I've looked up to throughout my professional career. 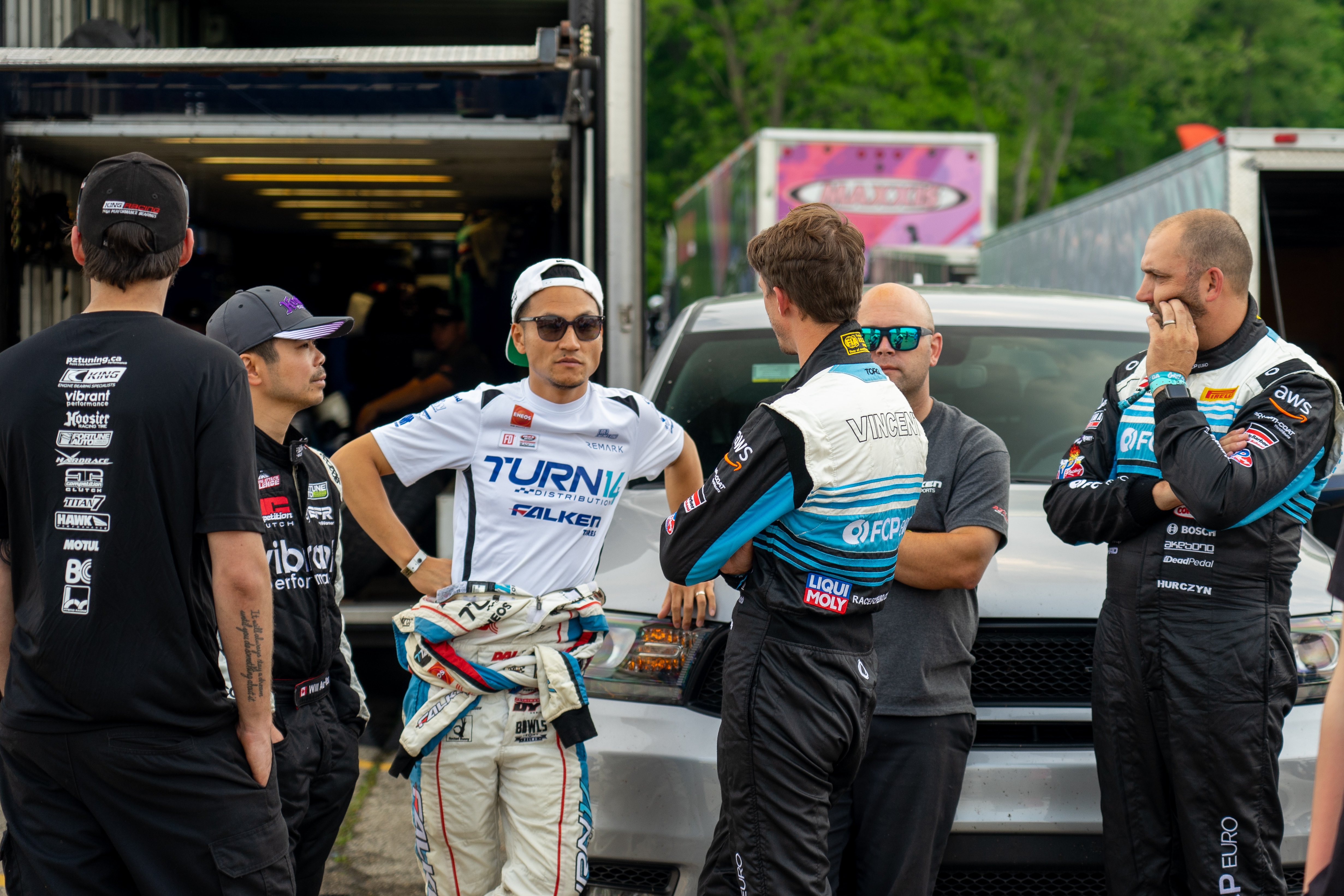 Since GRIDLIFE is a festival and not just a normal motorsports event, there's more to it than just what happens on track. Concerts, car shows, and so much more take place after hours. Because it's such a critical component of the event, the team broke free to attend one of the concerts and was, again, flooded with requests, high-fives, and a general "you guys are awesome" sentiment by those in attendance who knew the company. We had several people especially who came up to Denis and mention how they're rooting for him to get back onto track the next day. Oh, and by the way, our own Matt Spring worked tirelessly back at home throughout all of this to publish the fourth episode of The Paddock on time while simultaneously increasing the production quality (again). Please enjoy it and give him a special shout out if you liked the episode. 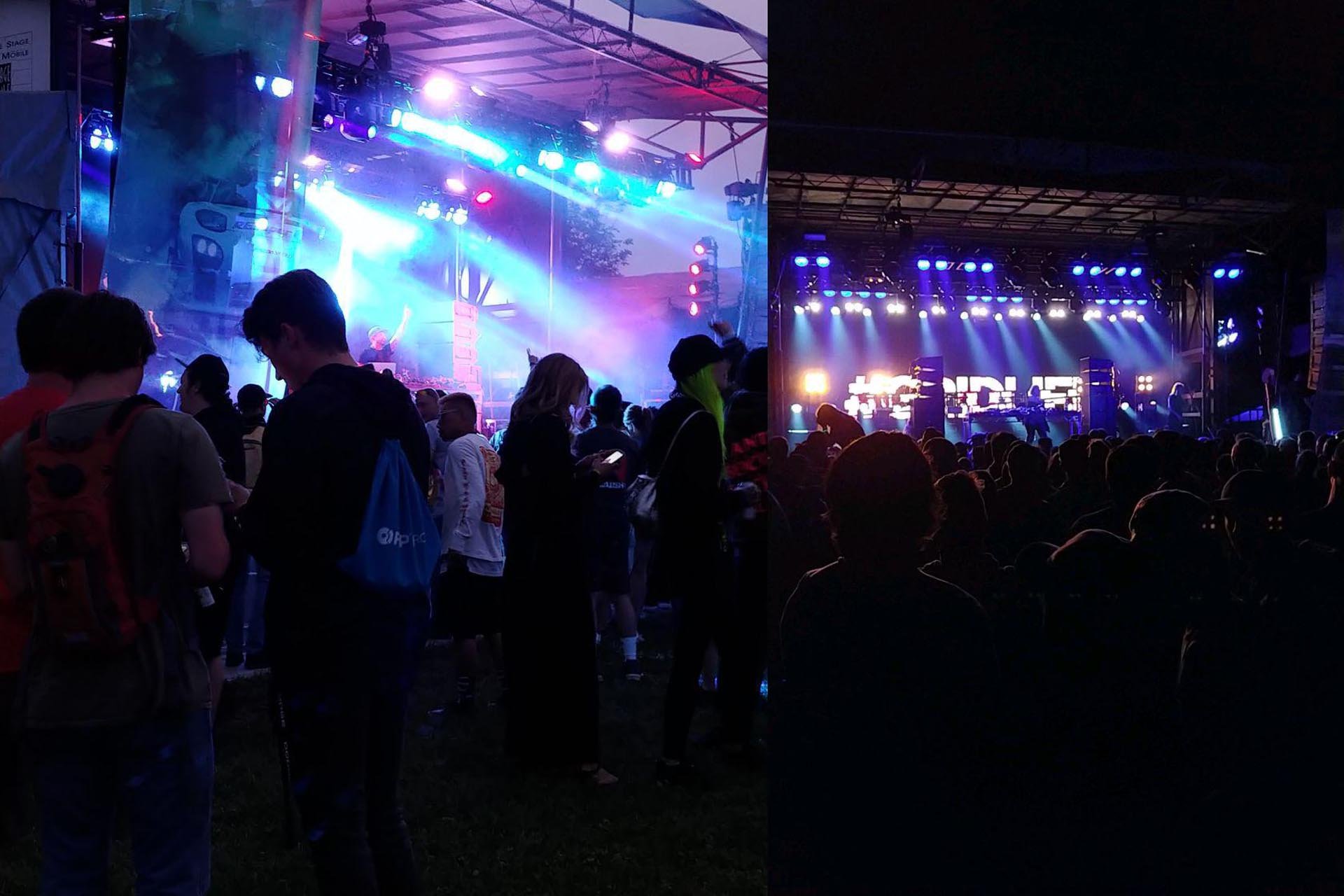 The team arrived at the track at 7am, and I took the opportunity to do a quick livestream of the paddock and somehow timed it so that I started livestreaming at the exact moment a dozen porta-potties in front of me began getting pumped out. Faced with one of the most horrific smells of my life (all captured in the livestream), I tried to move quickly through the paddock and onto other subjects, eventually dying due to low cell service. Mind you, there is great cell service coverage in Grand Rapids, Michigan, but the sheer amount of people at GRIDLIFE quite literally hog the satellites and slow down reception. We couldn't even download a photo let alone do this update due to inadequate internet access. 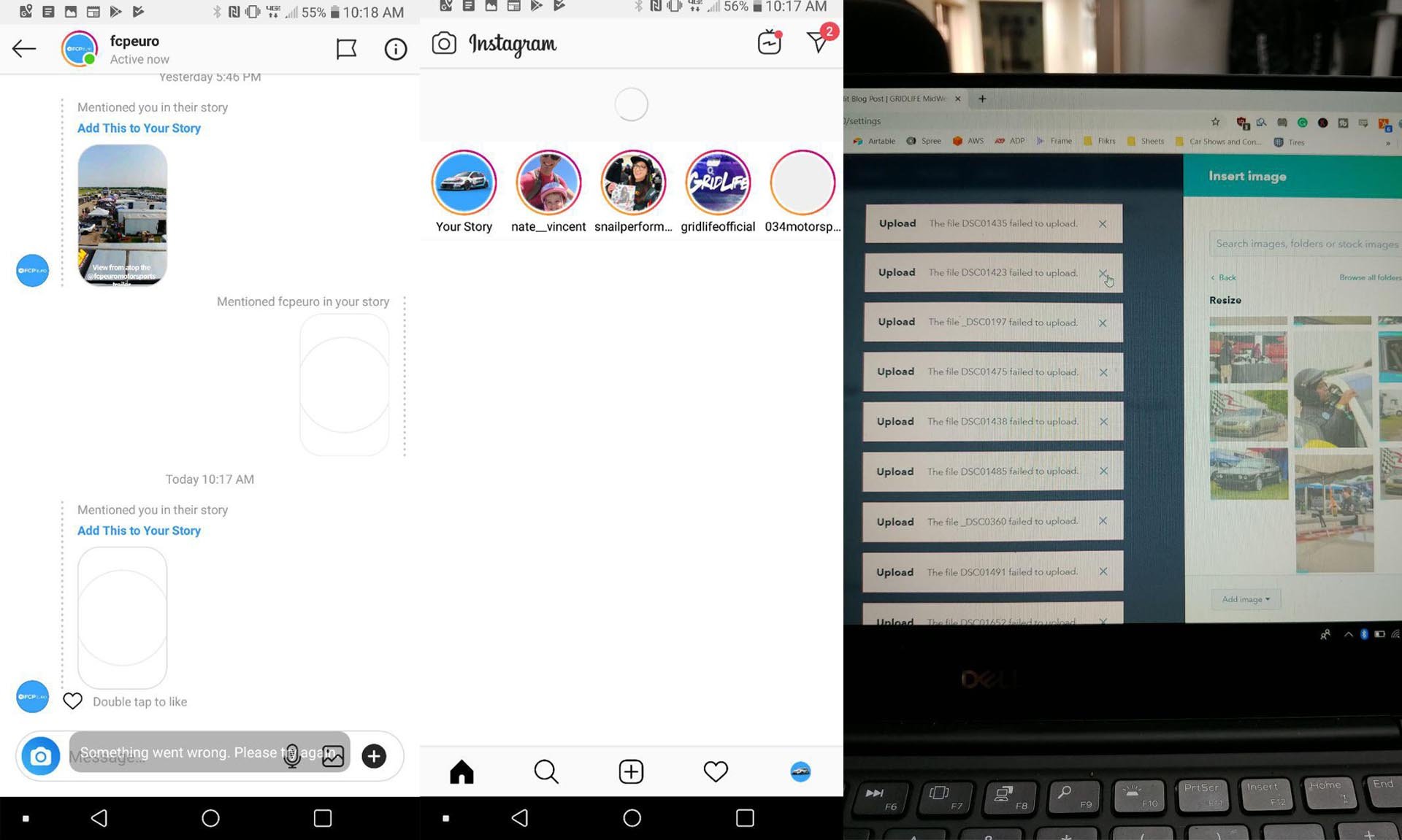 Another highlight of the morning was the same guys from Falken tire that gave Nate and Michael ride alongs the day before were kind enough to do the same for Jess, Evan, Ken, and Nathan. Jess, being a drifting enthusiast herself, was SO HYPED for this opportunity. 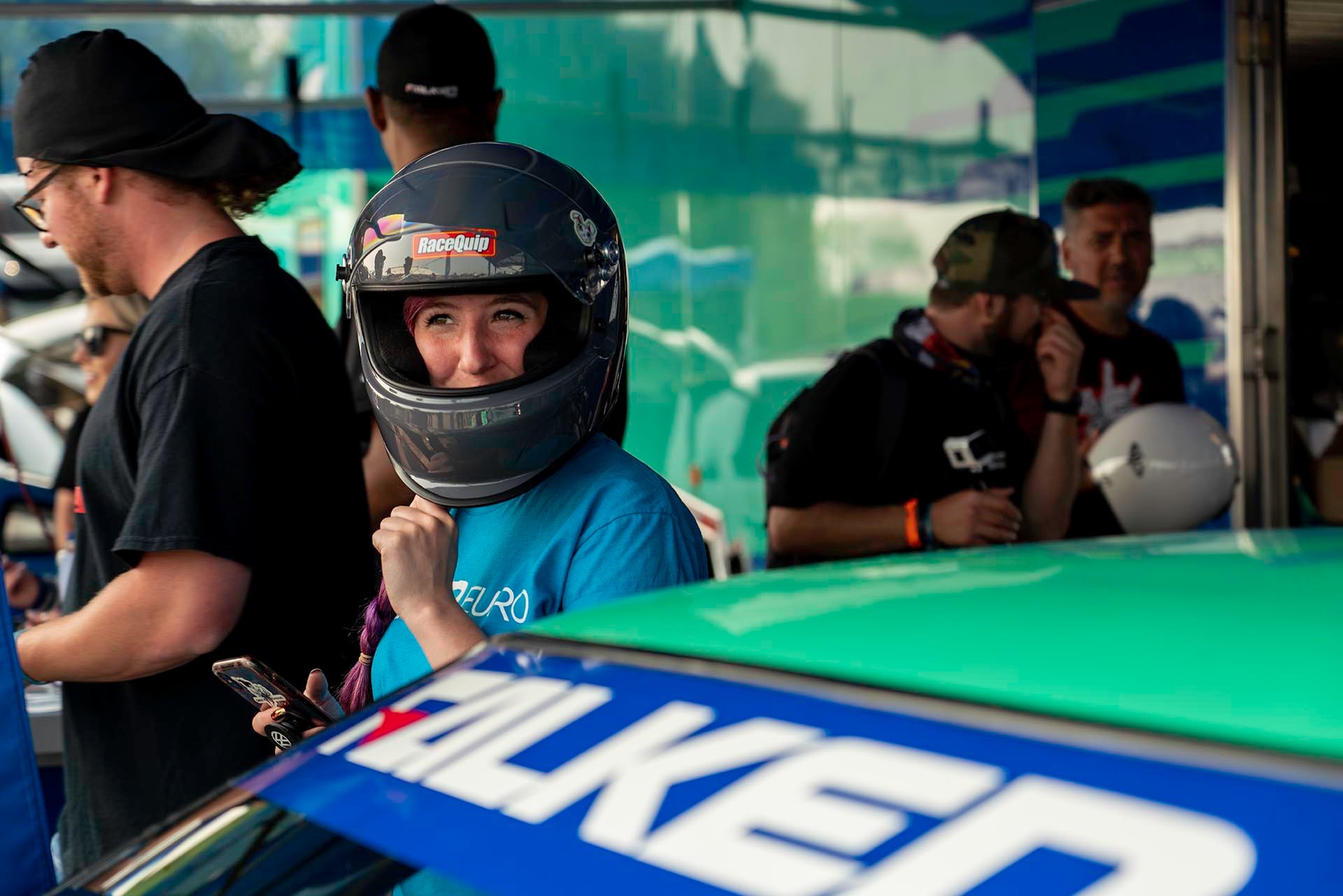 We did another 50+ ridealongs on Saturday. Fifty. Every reaction was the same. "Holy shit" or "that was (redacted) awesome" or "I can't believe these cars can do that" or "can I do it again?" Most people had never been on a race track before. We even had an employee from ECS Tuning come for a ridealong. I saw someone walk into our booth who drives a GTI, take an interest in the TCRs, get signed up for a ridealong, and afterwards said, and I quote, "I will never buy from ECS again. You guys are amazing." The events team of Jess Raison, Ken Whiting, and Nathan Brown did an incredible job bringing people into our paddock, telling them about who we are and what we do. They gave away almost all of the shirts and swag. It was easy to find a limited-edition FCP Euro / GRIDLIFE t-shirt by just walking around the paddock. 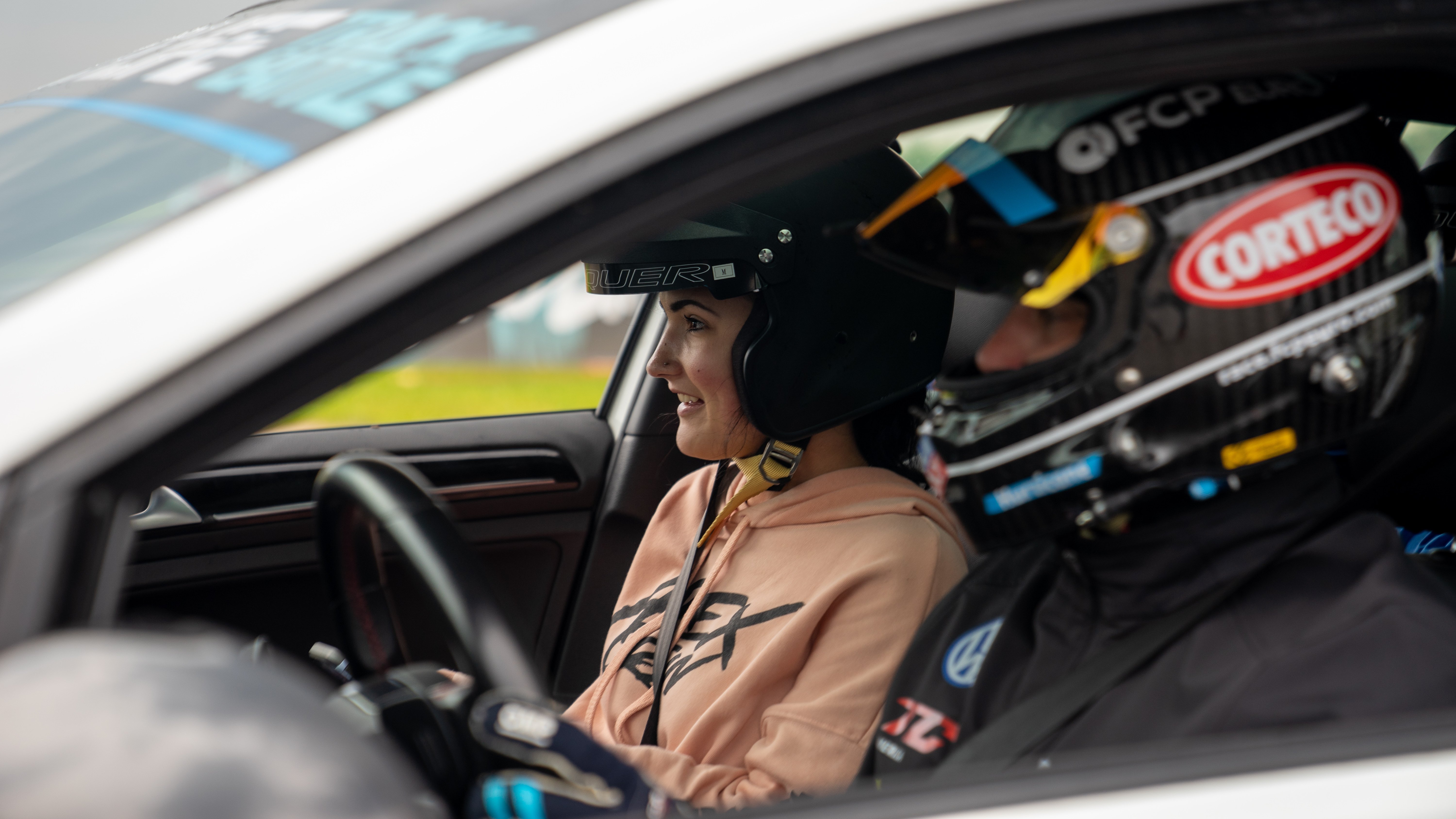 Our very own Ben Marouski deserves a huge amount of credit in the success of this event and partnership. Ben has been participating in GRIDLIFE events for years now, and has a deep understanding of the people, the process, and the connections needed to ensure an event of this magnitude goes off without a hitch. It's because of him we were able to secure a 20-minute session (that turned into a five-minute session due to upcoming inclement weather) with our GTI TCRs and Tom O'Gorman's Honda Civic Type-R TCR for a Japanese-inspired "Touge" battle. We went out right before the drift session, by far the most popular, where we had hundreds of people lined up along the track watching our cars go around with Tom. Also, because GRIDLIFE is so awesome, they livestreamed all of it and gave us huge amounts of airtime. We're still digging into the potential syndication and reach for that livestream and will have a better understanding of it's success after the weekend wraps up (there's more of it happening tomorrow, too). 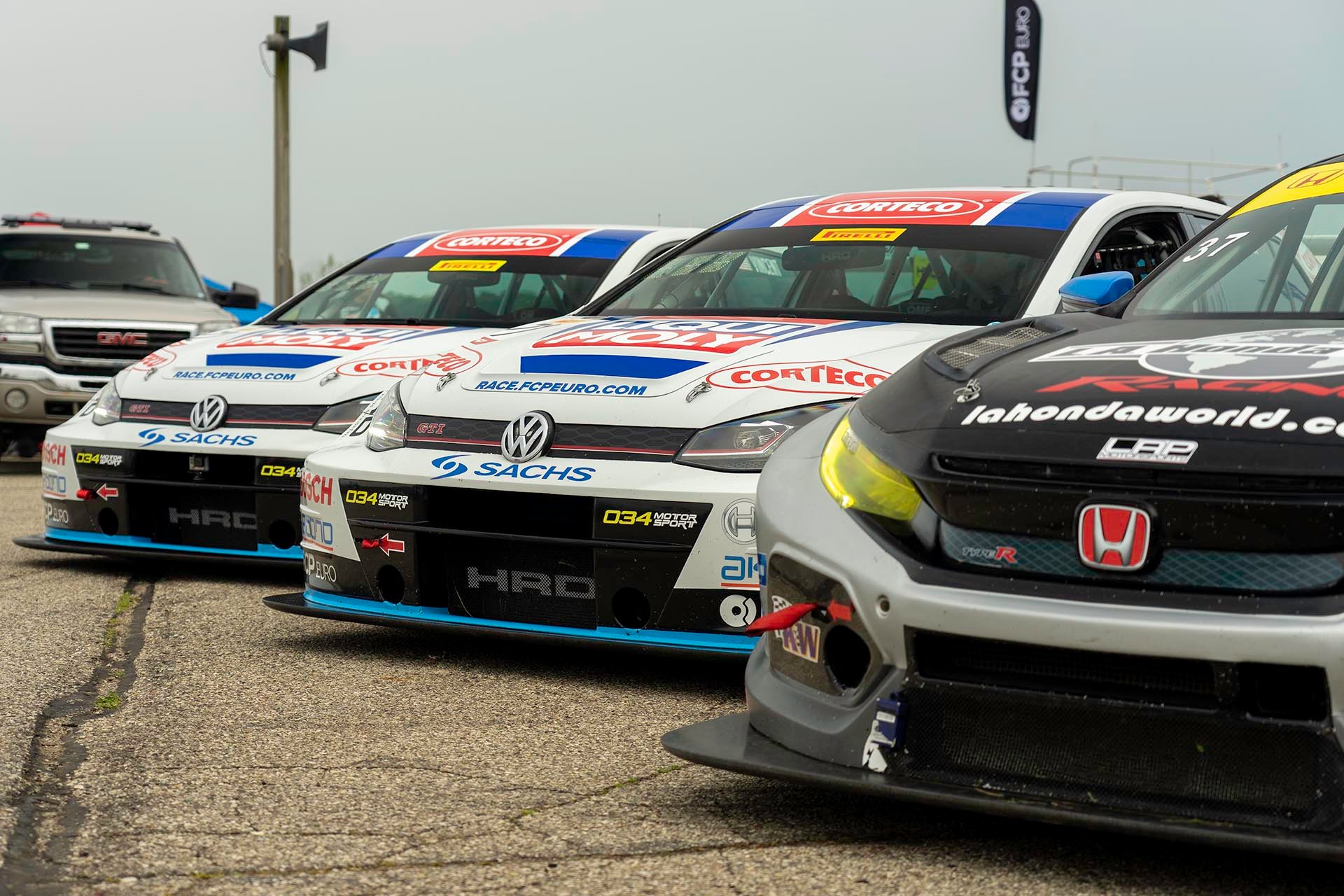 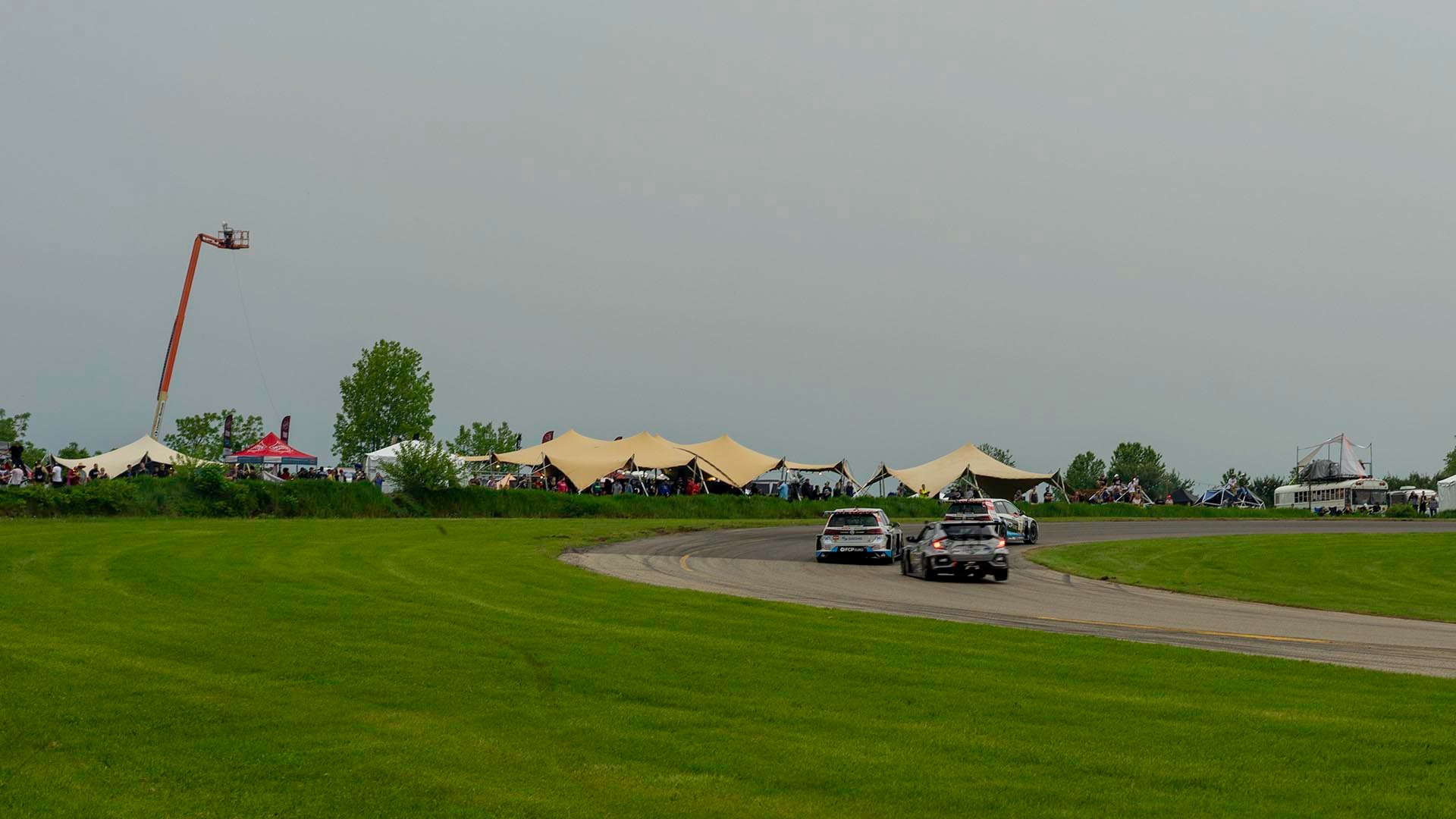 Among the challenges of this weekend, as mentioned in the last post, was weather. Later in the day, we were faced with an absolutely freak storm. A fast-moving cell of weather literally tore through the GRIDLIFE paddock to the point where we had to drop everything we were doing (everyone on the team) and save the tent, the cars, and the equipment from blowing away. I had never seen anything like it before in my life. It's what I would associate with an end-of-the-world type scenario. Just watch this video from Michael and you'll see what I mean.

As for tomorrow, we do it all again. I can't wait to share more about this event with the company, the readers of the blog, and the larger FCP Euro motorsports community. If you want more, be sure to check out the photo gallery from Ethan Roy and Evan Madore, we'll continue to update it throughout the weekend.