FCP Euro is at GingerMan Raceway for the GRIDLIFE MidWest Festival. There's drifting, time attack, concerts, wheel-to-wheel racing, and even Japanese-inspired Touge battles between our VW GTI TCRs and the Honda Civic Type-R TCR. Here's everything you need to know about what the team is up to and where we'll be throughout the weekend.

Those are the numbers for just some of the SWAG that we gave away to the thousands of GRIDLIFE attendees that came through our booth at GRIDLIFE MidWest and it all wrapped up this Sunday. What we can't count were the thousands of smiles, high-fives, and good times that were had from everyone that met us either in the booth or around the track.

Like the days previous, Sunday started bright and early. The word of ride-alongs spread like wildfire around GingerMan Raceway. Even before we rolled in, campers had already started lining up at our booth to sign up for ride-alongs and to get ready for some pre-scheduled 9AM sessions. Set-up was a smoother process on Sunday as the weather cooperated with us, and we consolidated our booth as the supplies of SWAG dwindled. Ken and Jess continued to kill it at the booth, talking about our company while simultaneously becoming the ultimate salespeople. Not only did they not let people walk away empty handed, but they educated those thousands of people on our Lifetime Replacement Guarantee. 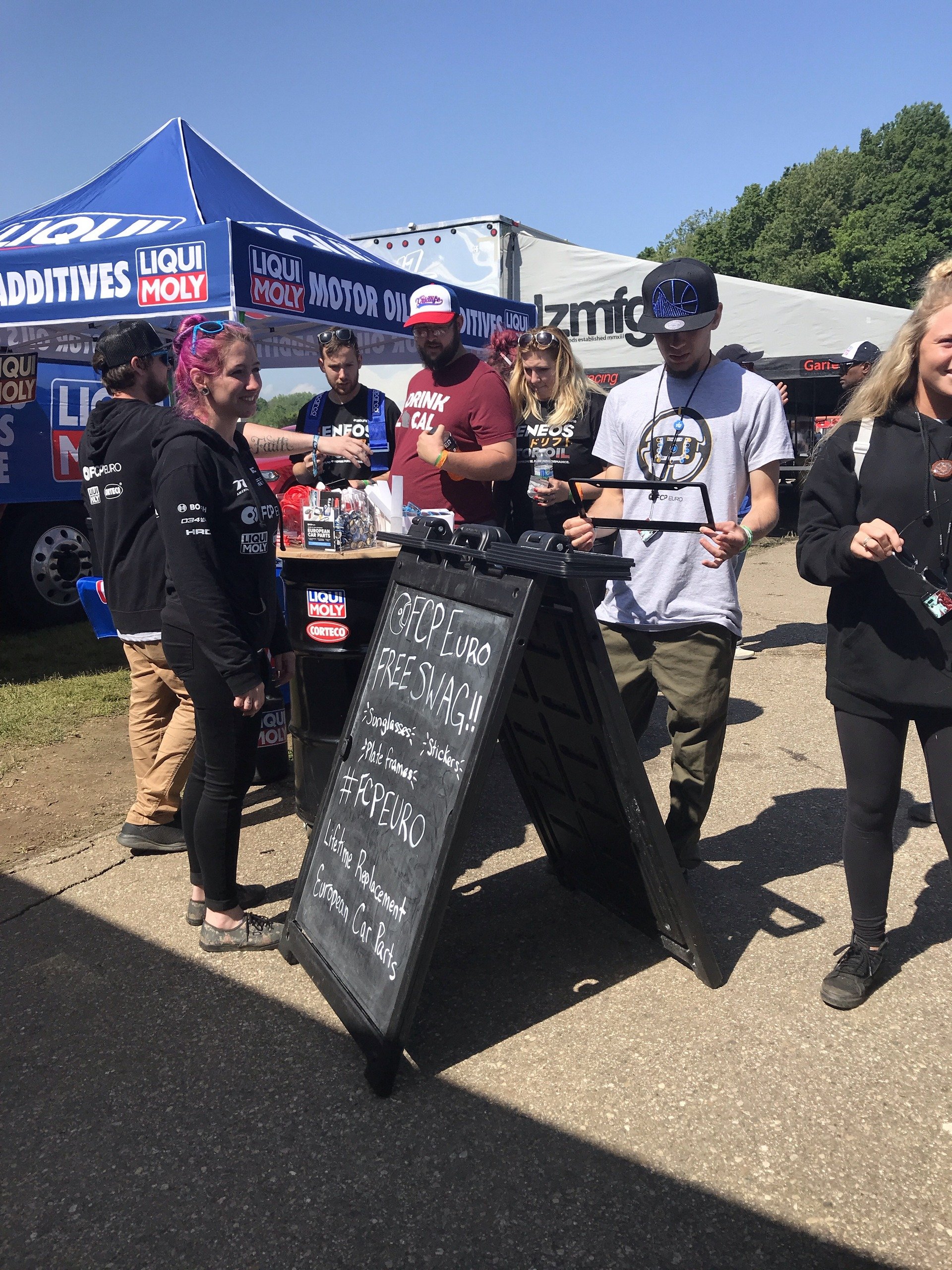 9AM came around, and we already had our Mercedes C300 and MK7 GTI out on track taking as many people as we could out for ride-alongs. Everyone that stopped by couldn't get enough of the cars. By this time, we had it down to a science. Riders were signed in, given a time to come back to the booth, and then brought to stage at the end of pit lane. Ben was fitting helmets, strapping people in, and making sure everyone was set to go out on track. If he had four more hands, he would have been using them as he was sometimes managing seven people, in three cars, all at once.

While everyone was laughing, screaming, giggling, and recording their hot laps around the track, Gareth was back at the booth getting our TCRs lined up for some promised rides. Matt Field, mentioned in the previous post, couldn’t wait to go out for a few laps. We also brought out GRIDLIFE Co-founder/Motorsports Director, Adam Jabaay who seemed to have a walkie-talkie glued to each ear all weekend trying to maintain the track schedule and keep everyone safe and smiling. The whole team at GRIDLIFE were incredibly accommodating throughout the entire weekend and, for the most part, made any request happen. Giving them a ride in the cars was the least we could do.

Just before lunch, I was able to sneak out and shoot some photos of a pristine Volvo V70 that I had lined up weeks prior. Thankfully, he was nice enough to stick around longer than he had planned just to let me shoot it. Expect a full feature piece of his car in the coming weeks. 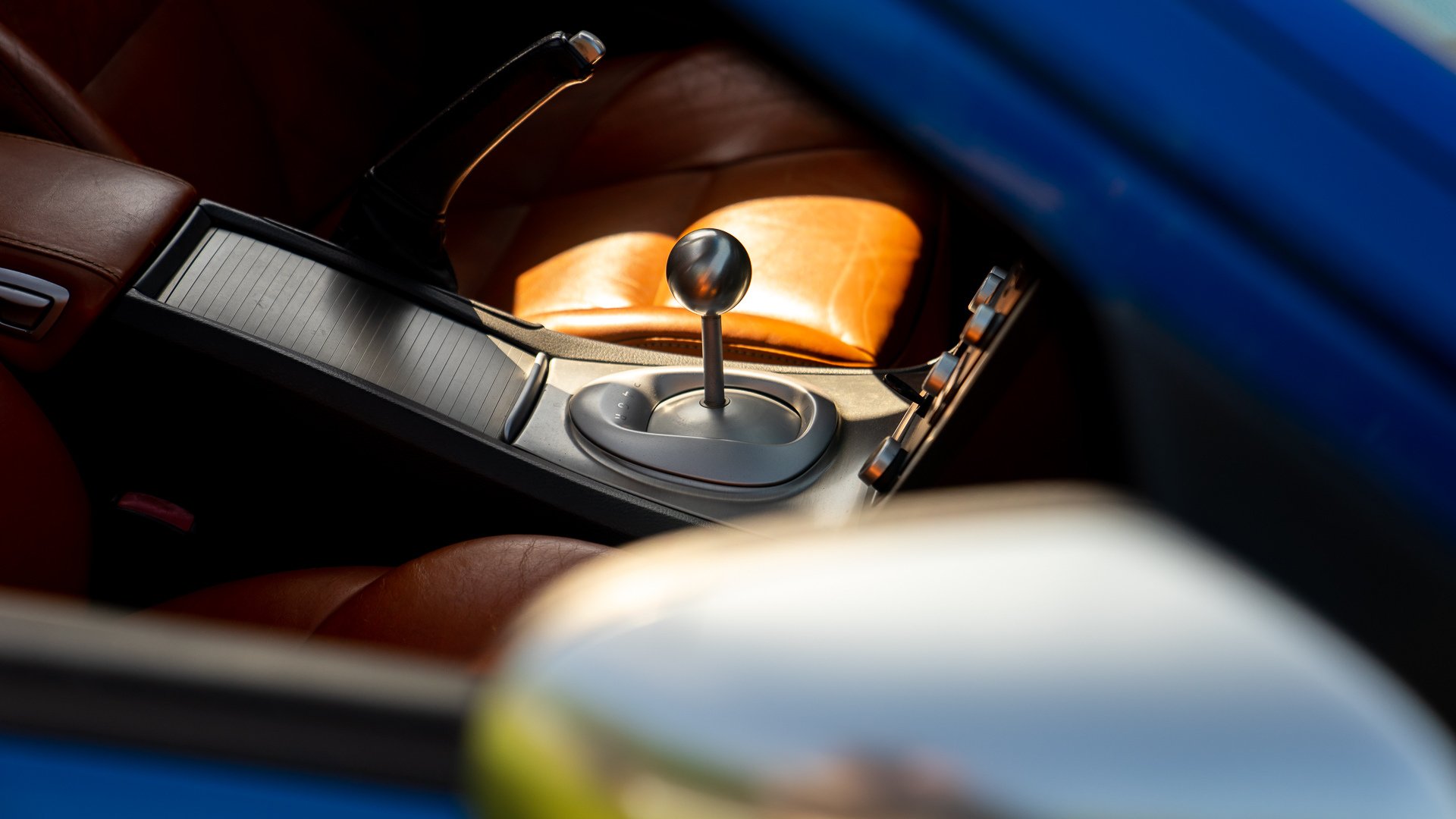 Sunday morning came and went just as fast as the rest of the weekend. After watching Saturday’s GRIDLIFE Touring Cup (GLTC), we all saw the potential for the C300 to run in it. If you didn’t know, GLTC is a wheel-to-wheel series featuring all makes and models of vehicles, with everything from Honda S2000s, to an early 90’s Ford Focus, and even a C4 Corvette. The class is balanced by using strict power-to-weight ratios, tire sizes, and aero regulations. In my opinion, it’s grassroots wheel-to-wheel racing at it’s finest. The sprints are short, (roughly only fifteen minutes) making for action-packed racing that is easy on the car, and if anything should go wrong, allows time to fix/prep for the next race.

Gareth really pulled out all the stops on Sunday, getting the TCRs prepped along with the C300 for the races. I don’t know how the man does it. He made sure everything went off without a hitch.

The time came for Michael to move to grid for race one of two in GLTC. Starting far back in the pack, he battled up through the field. Along the way, there were some heated battles for position as thousands of people watched live from the hillsides, stands surrounding the track, and via the livestream. After a few laps, he and the C300 settled into a comfortable mid-field position where they would finish the race. Mid-field was exactly where the C300 was expected to finish based on power-to-weight and tire sizes. It put on a great show and successfully represented the limited amount of European cars in the field. 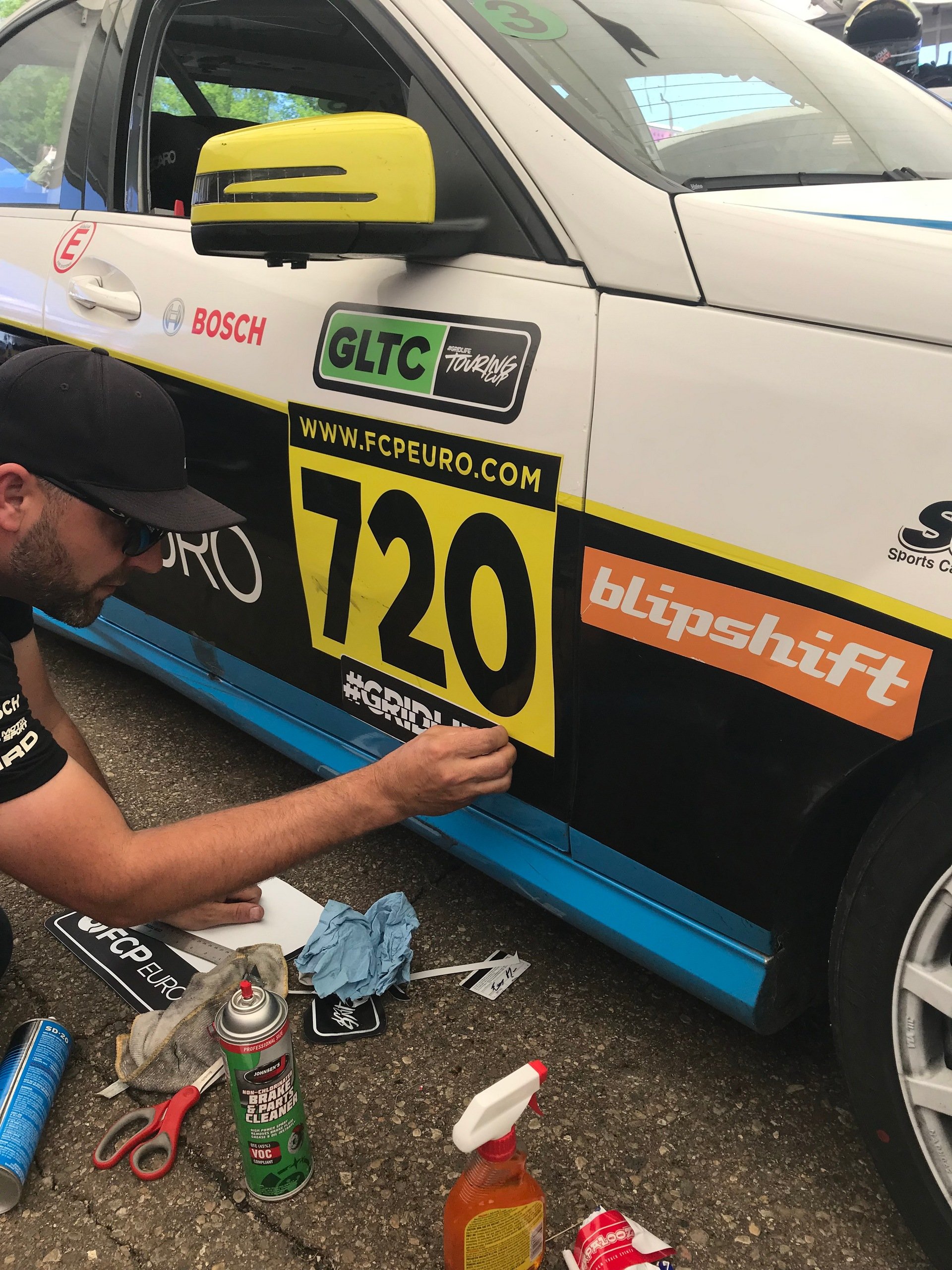 Later in the day, Nate would take Michael’s spot behind the wheel for his attempt to better the finishing position. Starting from dead last, Nate picked off car after car to find himself dead in the middle of the pack of forty. Along the way there were close battles, including a couple three-wide runs through the corners. The livestream coverage was some of the best coverage of any race I’ve seen. Chase-drone footage, corner cameras, tower cameras, and high-quality, knowledgeable announcing pushed it over the top. And, all of this was live on massive screens during the race for the crowds deep into the thousands to see. 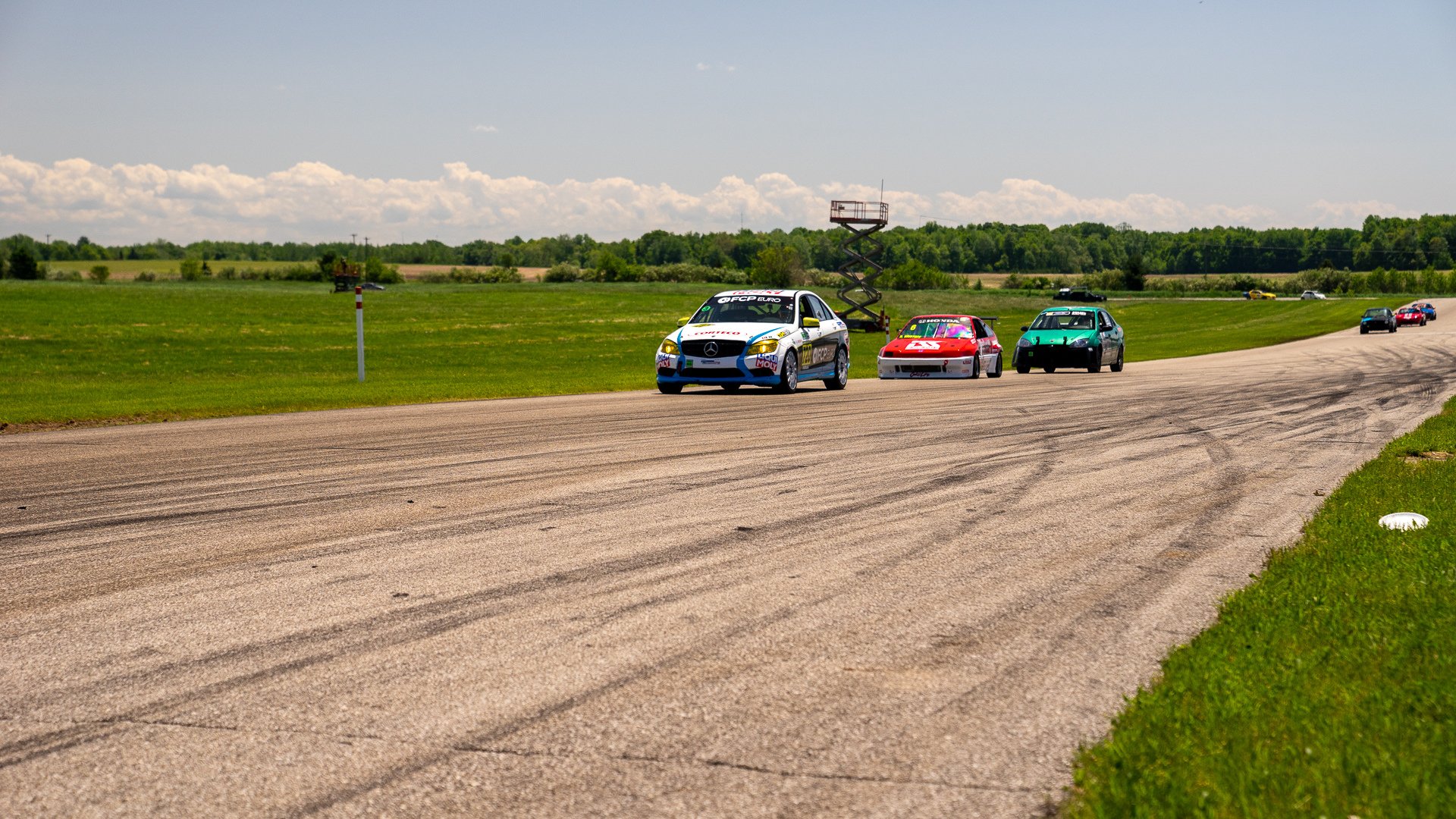 Between those two races, the TCR ride alongs went off without a hitch. Everyone who rode got out with a massive smile on their face and couldn’t believe the amount of grip they had and the control both Nate and Michael had behind the wheel. 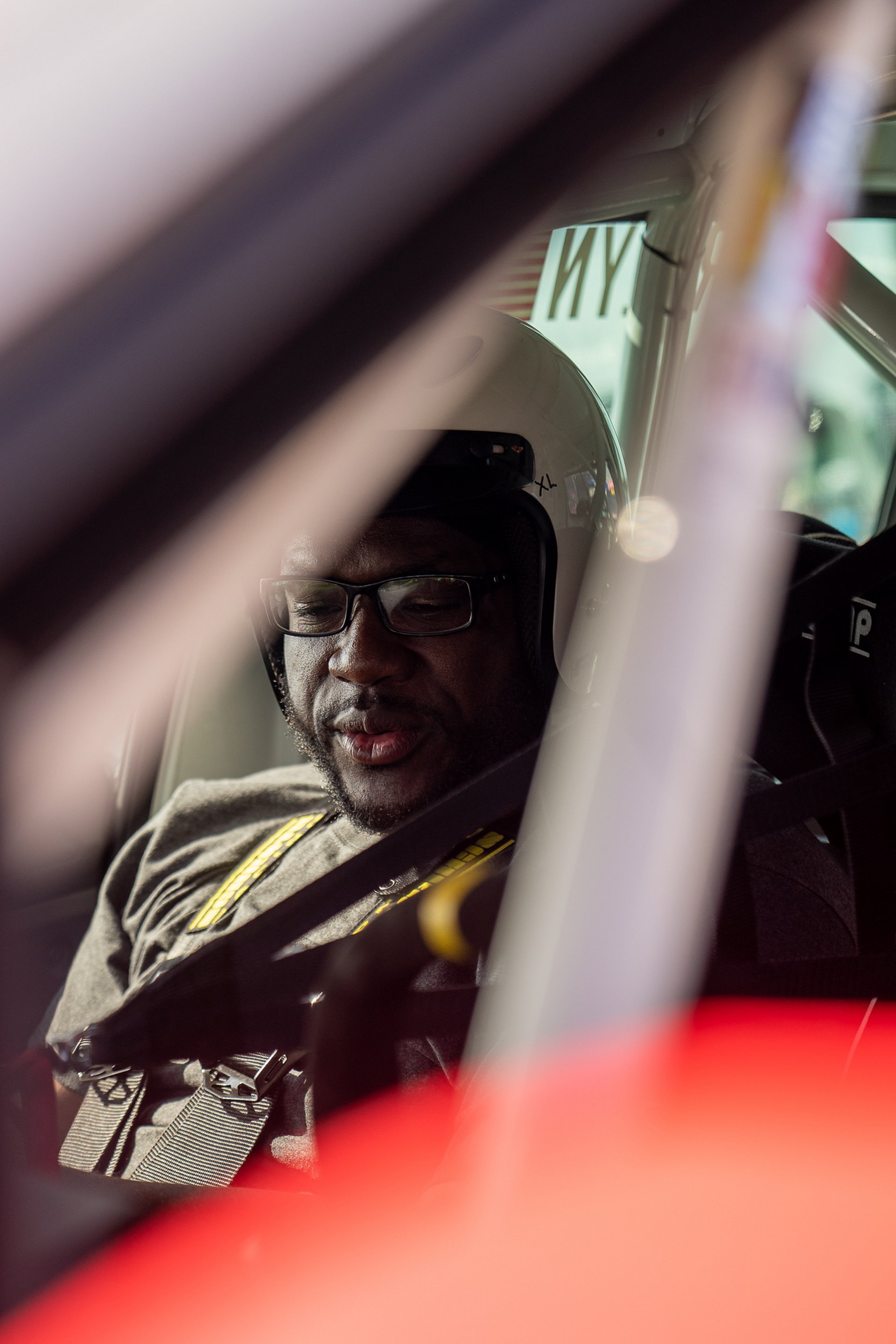 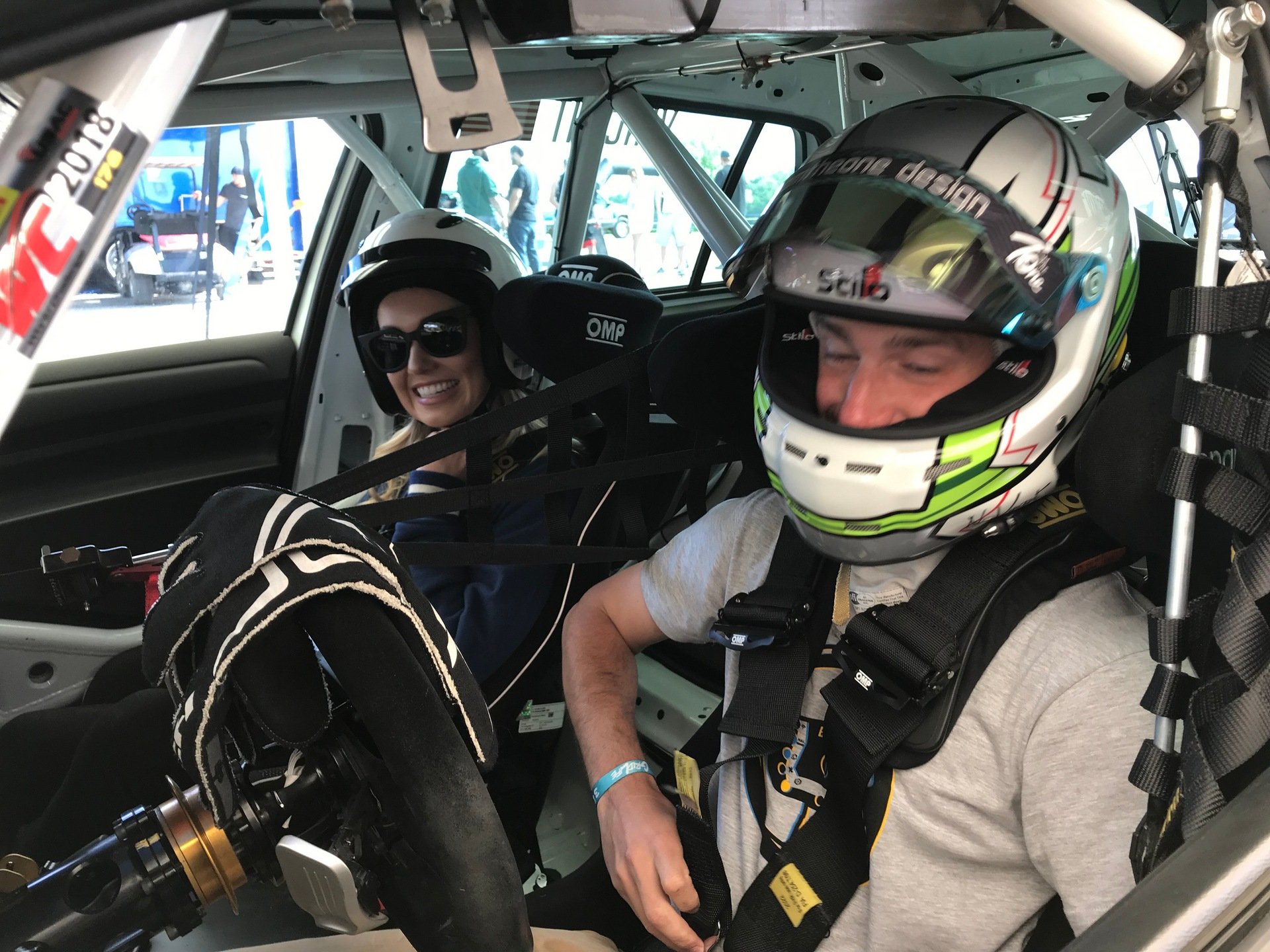 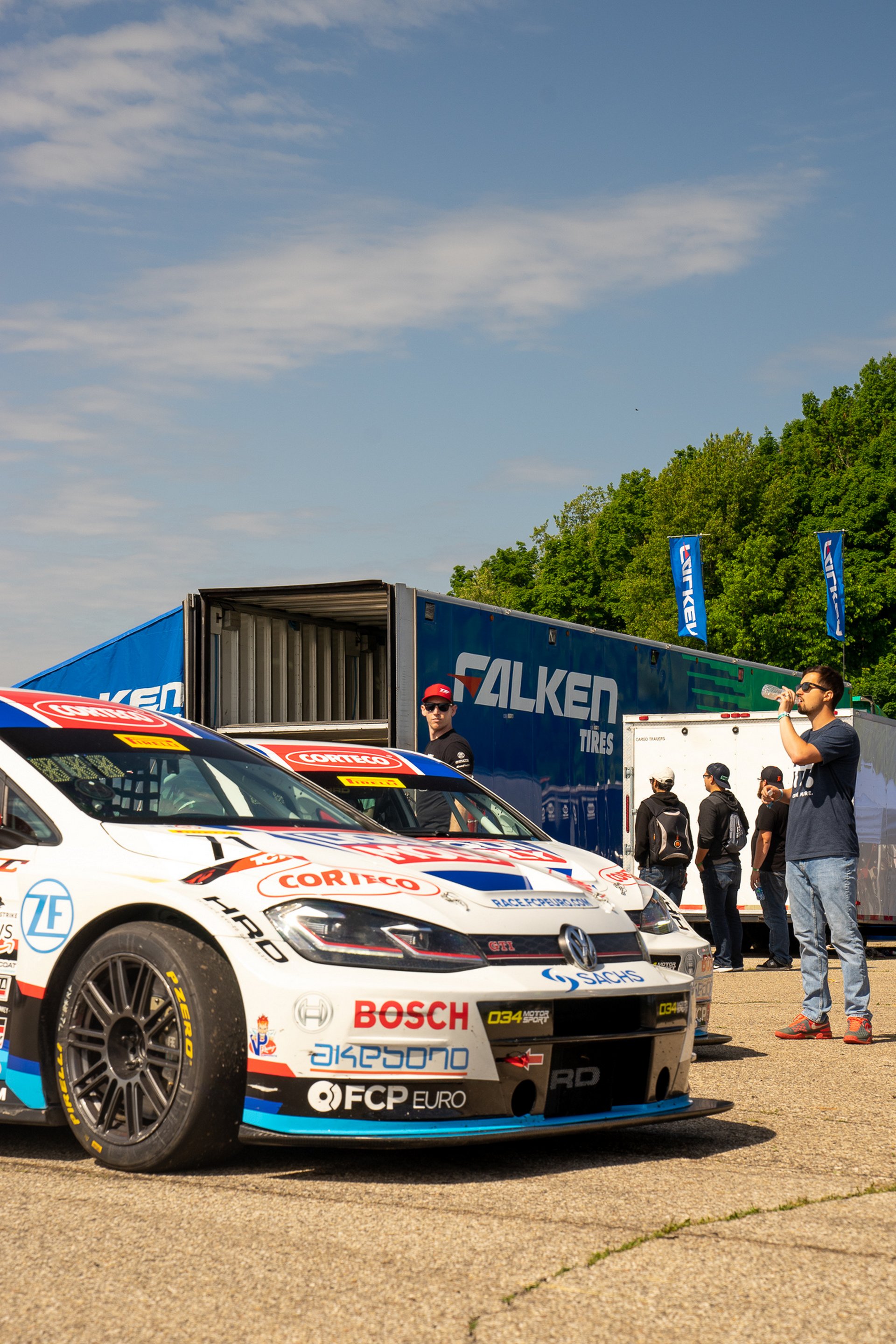 As soon as the cars were done running, tear down commenced. Jess, Ken, and Nathan didn’t have much SWAG to pack away as we were cleaned out. I couldn’t believe how much was taken, and how much of it was actively being worn by spectators at the event throughout the weekend. At any given time anywhere around the track, you'd look and see people wearing our shirts, backpacks, glasses, and even stickered-up cars and scooters. FCP Euro SWAG was basically a disease that spread through GingerMan that everyone caught and embraced.

Tear down and pack up went smoothly only taking a few hours in all. I’m still amazed at how much fits in the HRD trailer and just how tight of a fit the TCRs are in there (my back feels it today). Within half an hour of being packed up, Tiv and Jerry were already on the road with the cars, driving non-stop to Sonoma to make it there on time before the race.

And, just like that, the week was over. After running at 110% all week, while we were relieved to finally be done, it was a little bittersweet. Where else can you spend a weekend surrounded by genuine automotive enthusiasts that are there to simply have a good time in so many different facets of the culture? In my opinion, GRIDLIFE has found the perfect blend, bringing various different communities together in a non-threatening, educational manner. It really just works. We had an equal amount of people requesting ride-alongs in our car that were automotive/racing enthusiasts as there were people who had never been around a race car in their life. 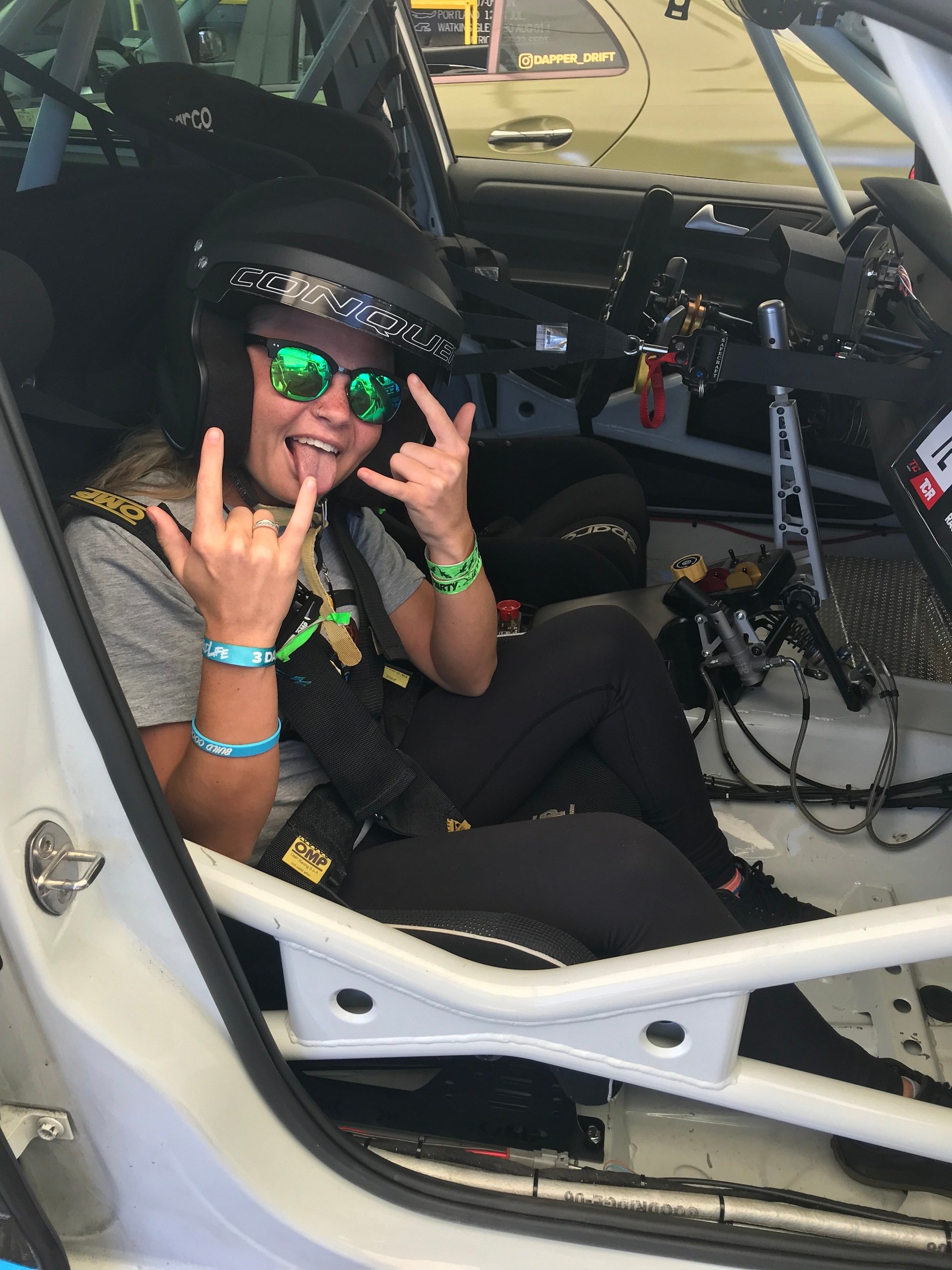 As I write this, I’m sitting on a plane headed to our team’s next stop in Sonoma, California for the next two races of TC America Championship. You can find more about that on both race.fcpeuro.com, as well as our full schedule on events.fcpeuro.com. I’m sure you will be seeing more of our GRIDLIFE content in the coming days and weeks, but If you want more right now, be sure to check out the photo gallery from Ethan Roy and I. And if you want to see even more coverage of the event, check out GRIDLIFE’s Instagram account for the official video (their media team did an amazing job documenting it).

We can't wait for Road Atlanta in August. See you there!