How to Change Fuel Filters in a Diesel Mercedes-Benz (OM61X)

When the OM61X equipped diesel cars were being produced back in the 1970's and 1980's, Mercedes-Benz knew that the diesel fuel available could often be rather dirty - full of particulate matter that could clog and damage the lift and/or injection pump. While less common this can still be the case today, especially at smaller stations that see less traffic from big diesel users such as tractor trailers. Therefore, they developed a very thorough fuel filtration system for the OM61X engines installed in the W123 cars.

Before talking about the design of the system, lets talk first about symptoms that point to clogged fuel filters. The primary symptom of fuel starvation is loss of power. This will be most noticeable first on hills or while trying to merge on to the freeway. You will notice that your diesel engine will not have the spunk it usually has - and if you own one of the earlier non-turbo engines you know this is saying a lot as they don't have a ton of spunk to being with! If left alone, the filters will continue to fill with debris until acceleration at lower RPM and lower load is affected. Eventually, starting the car may become more difficult.

Next, lets cover the basic design of the fuel filtration system. Fuel filtration starts at the gas tank with a fuel screen that sifts out the biggest debris. This part is usually fairly maintenance free and won't be covered any further in this article, though it is good to be aware that it is there - some W123 owners have banged their head against the wall after replacing their other filters only to find their fuel starvation symptoms remain. If this is the case, then it might be time to drain your fuel tank and inspect this screen. Picture below is said screen, having just been pulled out of the fuel tank. 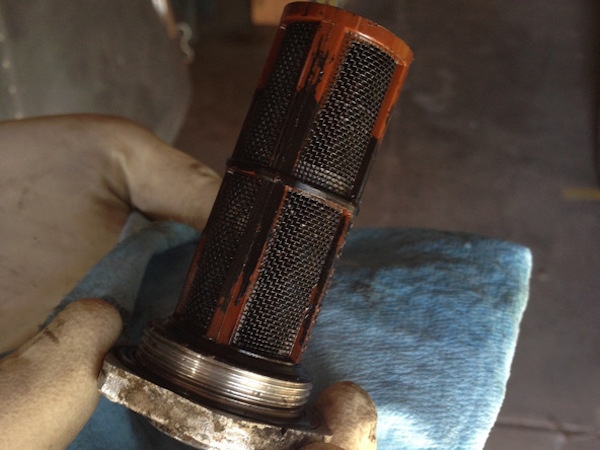 Next up in line is the primary fuel filter, which screens out the next level of particulate matter. This clear plastic filter is designed to allow for visual inspection of the fuel as it travels towards the engine. Picture below is this filter, having been in use for perhaps 10,000 miles with relatively clean fuel. 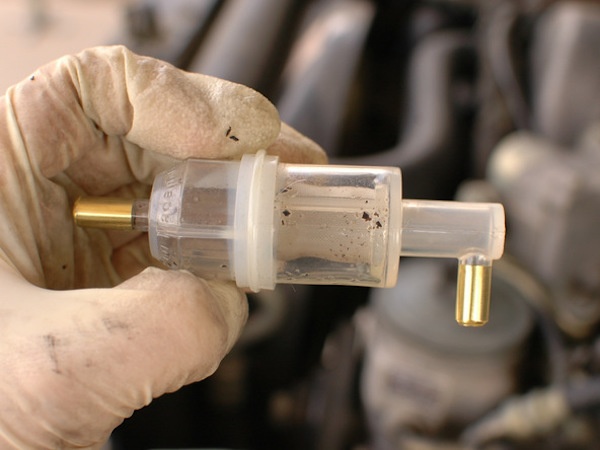 And finally, there is the large secondary fuel filter which is designed to filter out particles measured in microns. This is where the bulk of the filtering activity takes place. As such, this is usually the filter that is the culprit of fuel starvation. 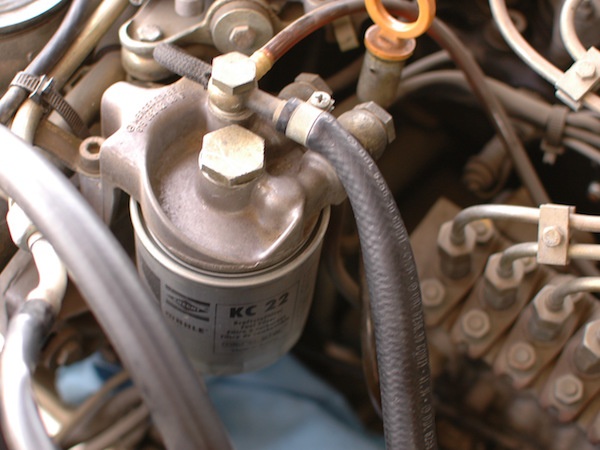 Read on to learn how to replace the primary and secondary filters! I usually replace both at the same time, out of due diligence.

Parts you will need:

Step 1: Start by replacing the primary filter. You will find it down below the fuel and power steering fluid lines, on the driver's/left side of the engine. It is right next to the fuel primer pump, the black plastic plunger seen in this picture just to the left of the filter. 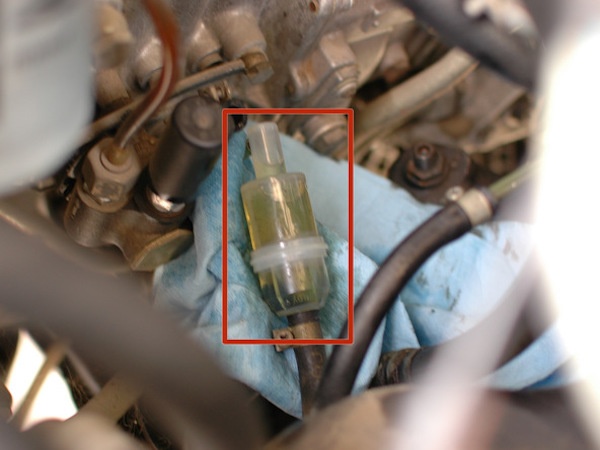 The fuel filter is held in place by two screw clamps. Loosen these clamps, and then pull the lines off the filter. 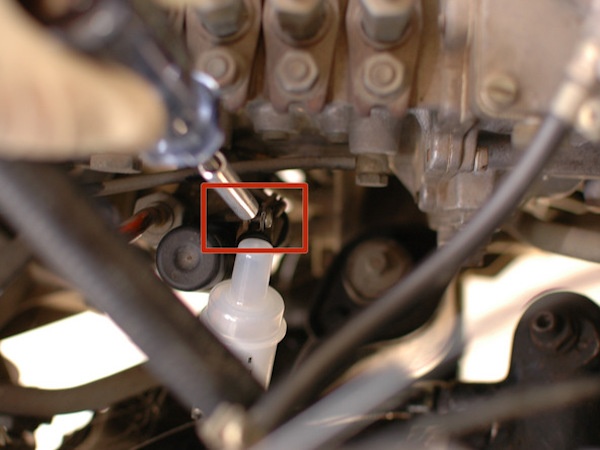 Step 2: Next, begin removing the secondary filter. To do this begin by loosening the large bolt on top of the filter. Early models (approximately pre-1981) tend to have a 22mm bolt in this spot. Later models tend to have a 24mm bolt. You'll have to check yours to know for sure as there was some period of cross over. 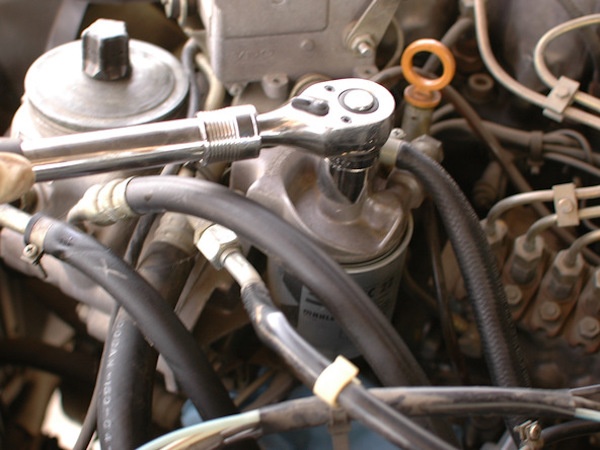 Step 3: As the bolt loosens hold on to the filter 1) to keep it from spinning, which will prevent you from loosening the bolt and 2) to keep it from falling once the bolt comes completely loose. After the bolt is out, carefully maneuver the filter out from between the various fuel and power steering lines until it is clear of the car. Try and keep it level as you move it as it is full of diesel fuel. If you tip it fuel will spill. 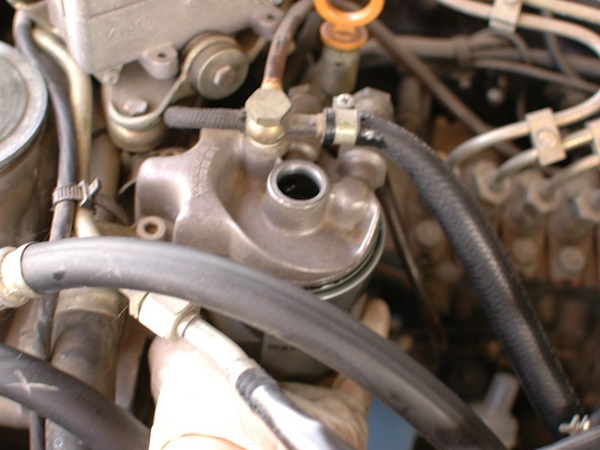 Step 4: Now, go ahead and install the new primary filter. Note that the filter will have an arrow indicating the direction of fuel flow. That arrow should point towards the fuel primer pump. Insert the ends in to the fuel lines and tighten the clamps and you're all done with that filter! 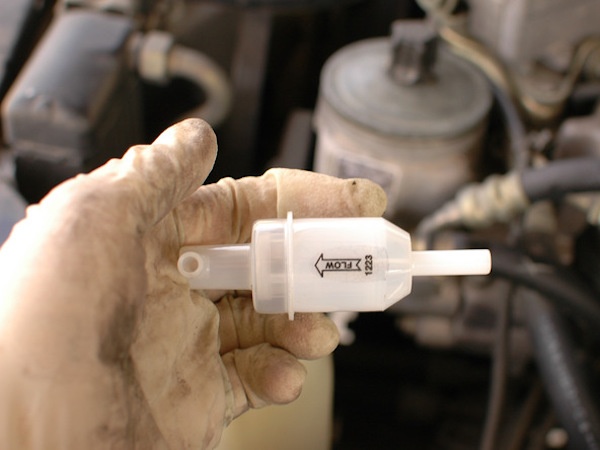 Step 5: Before installing the new secondary filter, replace the o-ring(s) (and if applicable the crush washer) on the filter bolt. 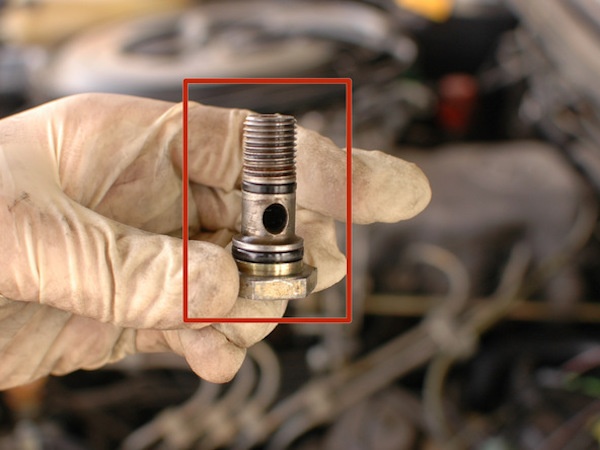 Step 6: Then fill the new filter with some type of fluid that your engine can safely burn. This filter holds a lot of fuel - almost a half quart - so it would take a LOT of priming to empty the air out and fill it with fuel. This saves you from most of that. You can obviously use clean diesel fuel if you have some on hand. Otherwise, you can safely use some clean engine oil, automatic transmission fluid, or vegetable oil. 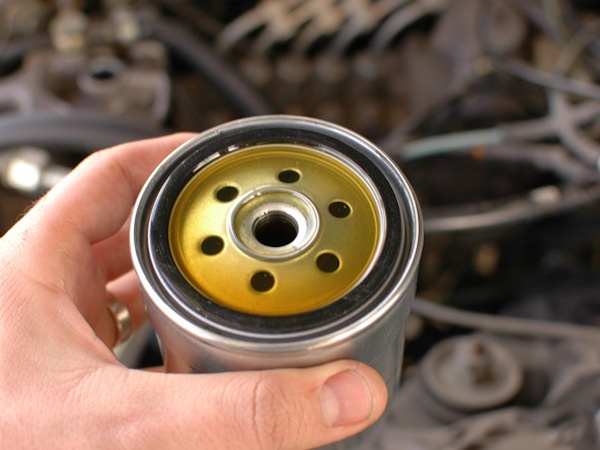 Step 7: Re-install the fuel filter then use the primer pump until you hear the fuel pressure relief valve release. This makes a squeaking noise from the injection pump. 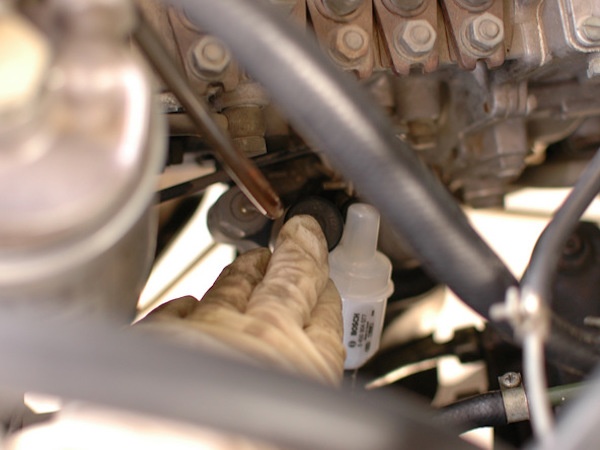 Now you should be able to start the car! If it doesn't start right away, pump the primer some more and try again.

Once the car is running check everywhere for leaks - at the hose clamps on the primary fuel filter, and around the bolt on the secondary. If you find any tighten down the clamps and/or bolt a bit more, clean up the area, and check again until you're car is leak free.

There is no set change interval for these filters. Generally, consider them preventative maintenance that you do once a year, or every other year if you don't drive your old diesel that often. Also keep in mind the fuel starvation symptoms mentioned above, especially if they set in suddenly - if you get a bad tank of diesel from a shady fuel station your car might die on the side of the road as the big secondary filter clogs up rapidly. Consider having a spare set of filters in the trunk, plus the tools to change them on the roadside, to save yourself the inconvenience and expense of a tow!