Choosing A Battery For Your Volvo

There are so many brands and types of Volvo batteries it’s hard to know where to start. You can certainly do a lot more research into the differences between car batteries than I will mention here, but to make it nice and simple, I will pare it down to the basics. There’s three main terms that you need to know about: Cold Cranking Amps, Reserve Capacity, and Voltage. 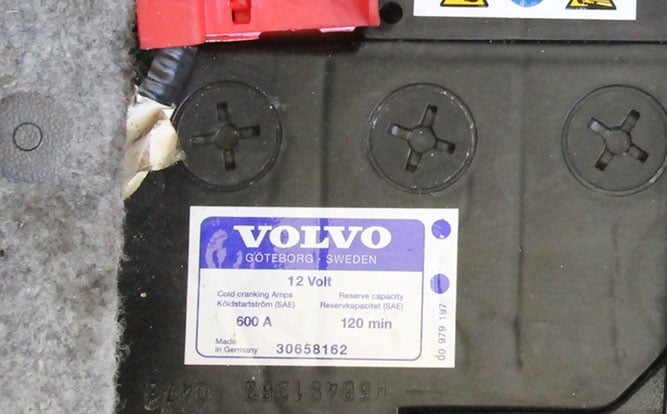 In the world of cars, many enthusiasts will say that “more is better”. In the case of batteries, the higher the cold cranking amps, the better. But how much do you really need? It’s akin to asking how much horsepower you really need. Some will say, there’s never enough, but others will shrug and work with what they need.

Cold cranking Amps is a measure of how much power (or Amps) your battery can deliver while at -18C for 30 seconds while maintaining a minimum of 1.2 volts per cell. Larger engines will generally need more power to start. For example, in a 2008 Volvo S80, the 3.2L I6 engine requires a 12V battery with 520 CCAs. The V8 model will require 800 CCAs. Its simply a case of more power needed in order rotate a greater amount of engine components. Using an 800 CCA battery for a car requiring only 520 CCAs won’t hurt it, but you won’t see any benefits unless you’re in extreme cold environments.

The reserve capacity is defined as the number of minutes a new, fully charged battery will provide 25 Amps of power at 26C while maintaining a minimum of 1.75 volts per cell, without being charged. As with CCA’s this is also a case where higher is better, but more is not necessarily needed.

This number is essentially a safeguard to get you home in case your charging system fails. Additionally, accessories such as security systems or dash cams can slowly drain your battery while the car is off. With that said, if your charging system is working fine, and you're not powering your house through your car battery, you won’t need to worry about increasing reserve capacity beyond what your car came with.

12-Volts. That’s all you need to know. Apart from a very small number of cars, the majority of vehicles on the road today use a 12 Volt battery. There are exceptions that use 24-Volts, but if you’re driving one of these cars, chances are, you’re not shopping on FCP Euro for parts!

As a final note, there are multiple battery sizes. Use an online battery finder to find the correct size for your car. Apart from a simply list of applicable batteries, this will be noted as the “group number”. Group numbers categorize the length, width, height, and placement of the battery terminals. If the group number on your new battery matches your old one, it should fit fine.

You’ll notice that my replacement CCA’s are higher, not because I wanted or needed more, but because this battery had a longer warranty than one with a lower CCA rating. The reserve capacity is slightly lower than OEM, but since my charging system is still top notch, I'll be fine. Always check the entire charging system - such as cables, tie downs or switches - these parts are all readily available and will keep the car original, charged, and safe. 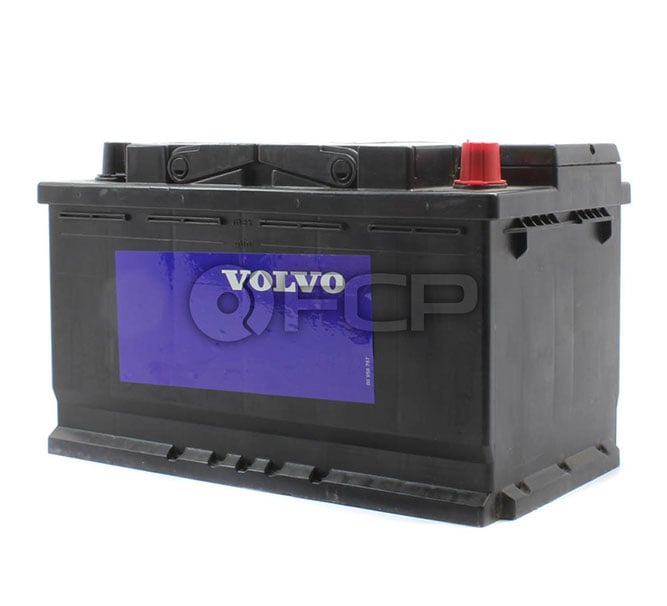 There are two rules of thumb to follow when replacing a car battery:

So what happens if you remove the positive terminal first? Well, if you inadvertently touch a part of the car which connects to the ground of the battery while removing the positive terminal, you’ve just made a connection and bam! You’ve short-circuited the system and you might miss Sunday night football, or worse. If you remove the negative terminal and accidentally touch a part of the car with it, there’s no harm done as there’s no flow of electricity in the first place. For even more safety conscious people, wear a pair of rubber gloves while making this fix.

Steps to replace your Volvo battery:

Step 1: Make sure you have your radio code on hand

For the Volvo S80, the radio is tied to the ECU, so there is no need for a radio code. For many other cars however, be sure you have yours on hand. Removing power to your car will inevitably cause your radio to ask you for the code when it powers on. Without it, bringing your radio back to life will either be very expensive, or... very expensive. You choose.

In older 93-00 P80 vehicles, the radio code might be written on top of the head unit (if you're lucky), or is more likely written on a card in your owner's manual. If not, a Volvo dealer can tell you the code based off of the VIN or the serial numbers on the radio if it is non-original to the vehicle. 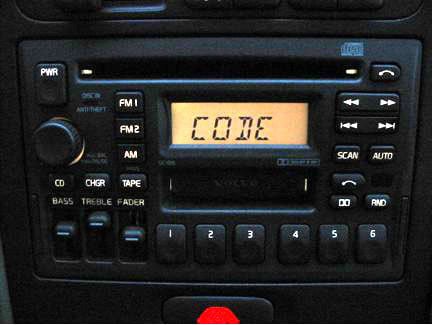 The battery in my 2005 Volvo S80 is located in the trunk. This is great as the battery is kept clean and isolated from any grease and road grime resulting in a pair of clean hands. Use a 10mm wrench to loosen the connection and pull it off. Be sure to place the negative terminal aside so it can’t accidentally touch the positive terminal. 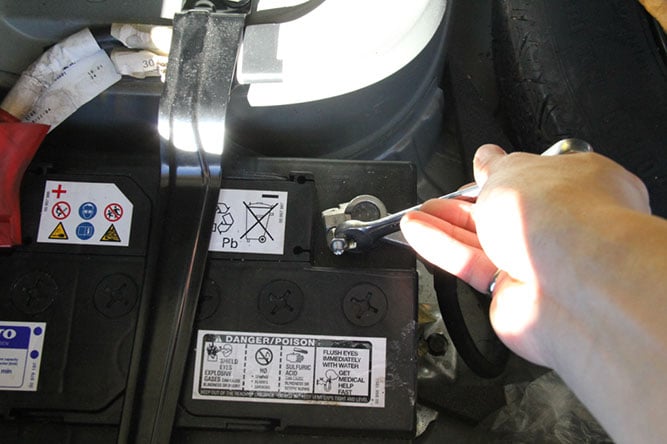 Again, use your 10mm wrench and remove the positive connection. Once the connection is removed, snap the cover of the positive terminal closed to prevent the possibility of a short circuit. 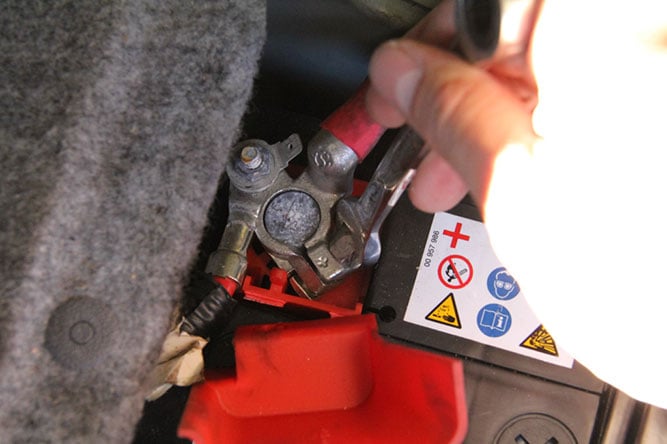 Remove the appropriate brackets, both the lower bracket (12mm) and the upper bracket (13mm). Lift your battery out. To prepare it for recycling, cap the positive terminal. If your new battery has a recycling tag on it, put it on the old battery. 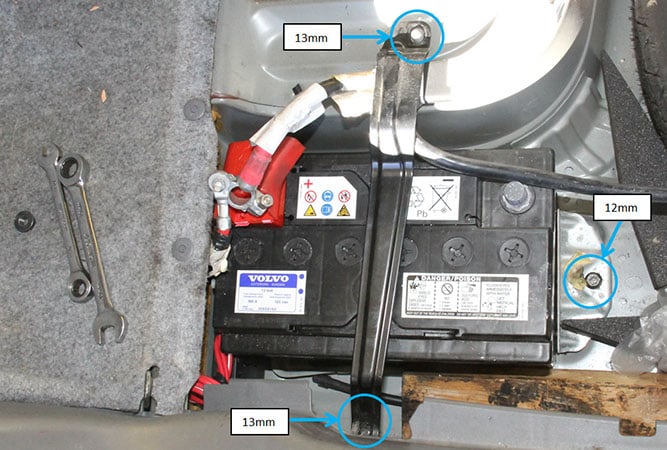 Install your new battery, keeping the covers on both terminals on as you lift it into place. Once you have secured your battery with the brackets, attach the battery wires starting with the Positive first, followed by the negative terminal, removing the appropriate covers just before attaching the battery leads. Don't be afraid if you see a few small sparks as you connect the negative lead.

If your battery has a vent tube, connect it. Usually, if the battery is located in the trunk, there will be a vent hose available. This is very important as gases escaping from your battery can be extremely dangerous if allowed to collect inside the trunk. If it’s under the hood, it may or may not have a vent tube. In the absence vent tubes on your car, simply ensure the battery vents are not obstructed.

*Note: the below picture was taken before I installed the vent tube. You can see it just below the battery, in corrugated plastic sheathing. 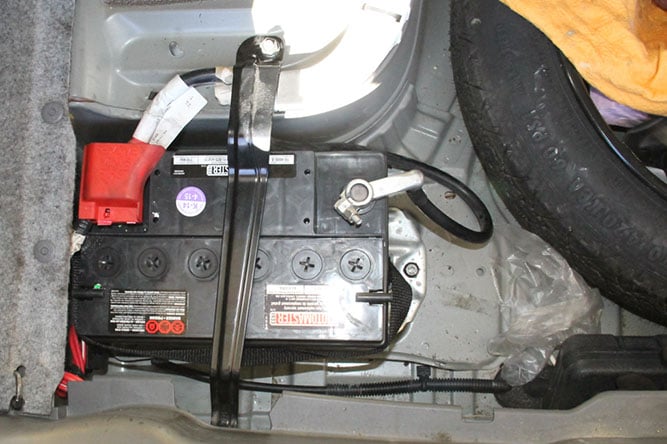 There you have it. A brand new battery installed, ready for some hard starting over an upcoming cold winter season. If you have any questions, leave them in the comments below.