Gareth Foley is our BMW Catalog Manager here at FCP Euro. When he's not spending time during work hours building the BMW Catalog, he's wrenching on our VW GTI TCRs as part of the crew and race team. But, understandably, he has a desire to get behind the wheel of his own track car this season. Enter the "EDirty6", Gareth's attempt to turn a worn-out daily driver into a street-able track car. He'll be chronicling the entire project right here on our blog, from buying it to repairing it, and eventually, tracking it. - Editor

Compression testing is one of the most common procedures for checking the relative health of an engine. After all, engines are air pumps, and without compression, they tend not to work well. If you ever want to know where you stand in terms of the overall health of your engine, a compression check is the first place to start. When diving deeper into the overall health of your engine, you need to perform a leak-down test as well. A compression test determines the relative compression between individual cylinders while a leak-down test determines the sealing ability of the valves, head gasket, and piston rings. 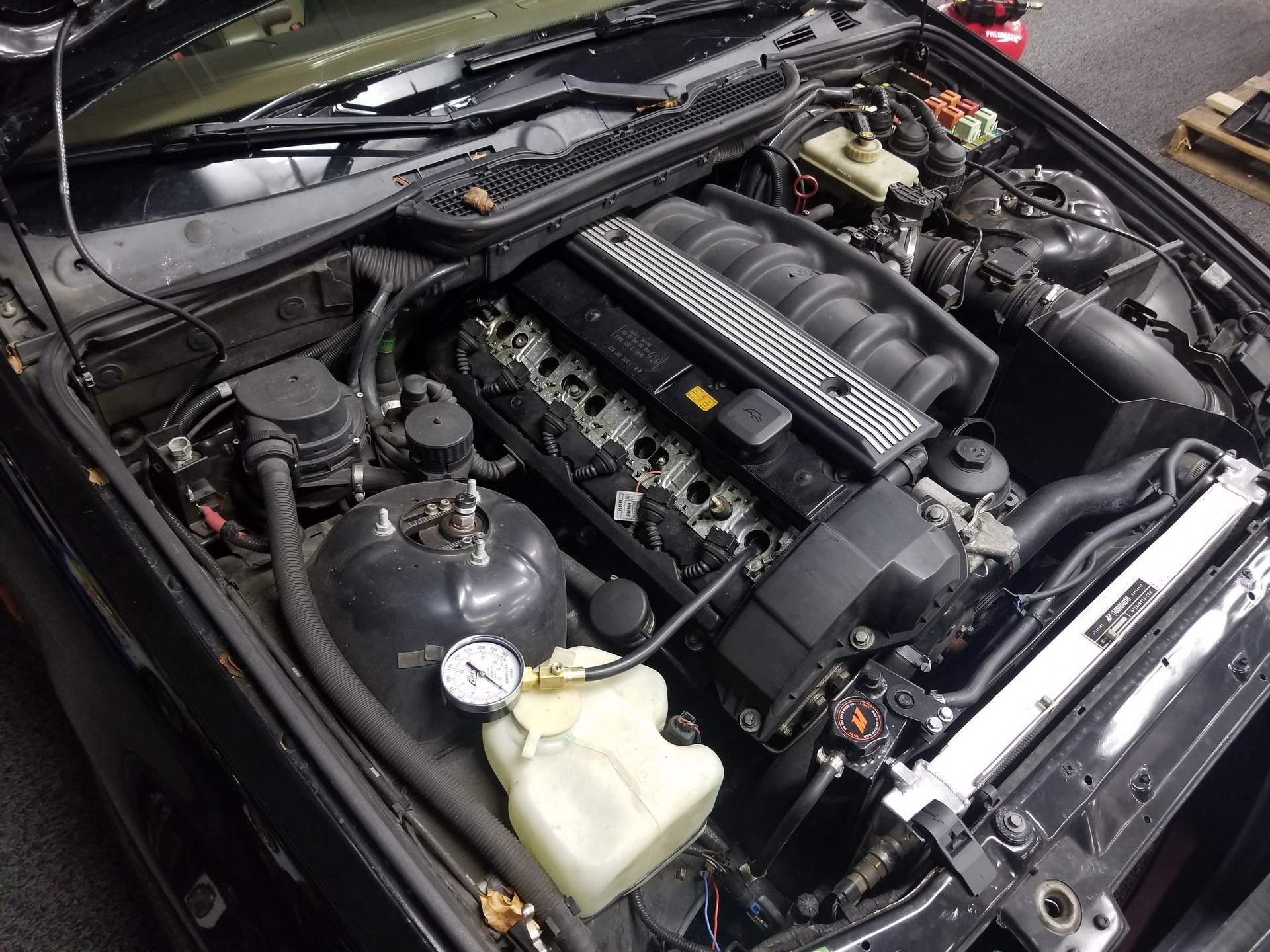 Tools Needed to Perform a Compression and Leak-Down Test:

Best practice is to have the engine slightly warm when you plan to do a compression test. The reason for this is that the piston rings expand when warm. In turn, this gives you a more accurate idea of the compression within each cylinder when the engine is at operating temperatures. Performing a compression test when the engine is cold is generally a less precise approach. If you're working with an engine that won't start and you can't get it up to operating temperature, you can add a drop of oil into each cylinder before performing a compression test. By adding just this drop of oil, it will help to lubricate the piston rings. This is a non-issue if you can run the engine, first.

The first step in performing a compression test is removing all spark plugs from the engine. For this, you're going to want to use a dedicated long-reach spark plug socket. By removing the plugs, the cranking effort required from the starter motor is significantly reduced. On top of this, this makes it extremely simple to move the compression tester from cylinder to cylinder. At this point, it's a great time to have a battery charger hooked up while you're continuously cranking the engine over. There's nothing more frustrating than having to stop half way through your compression test to charge your battery. 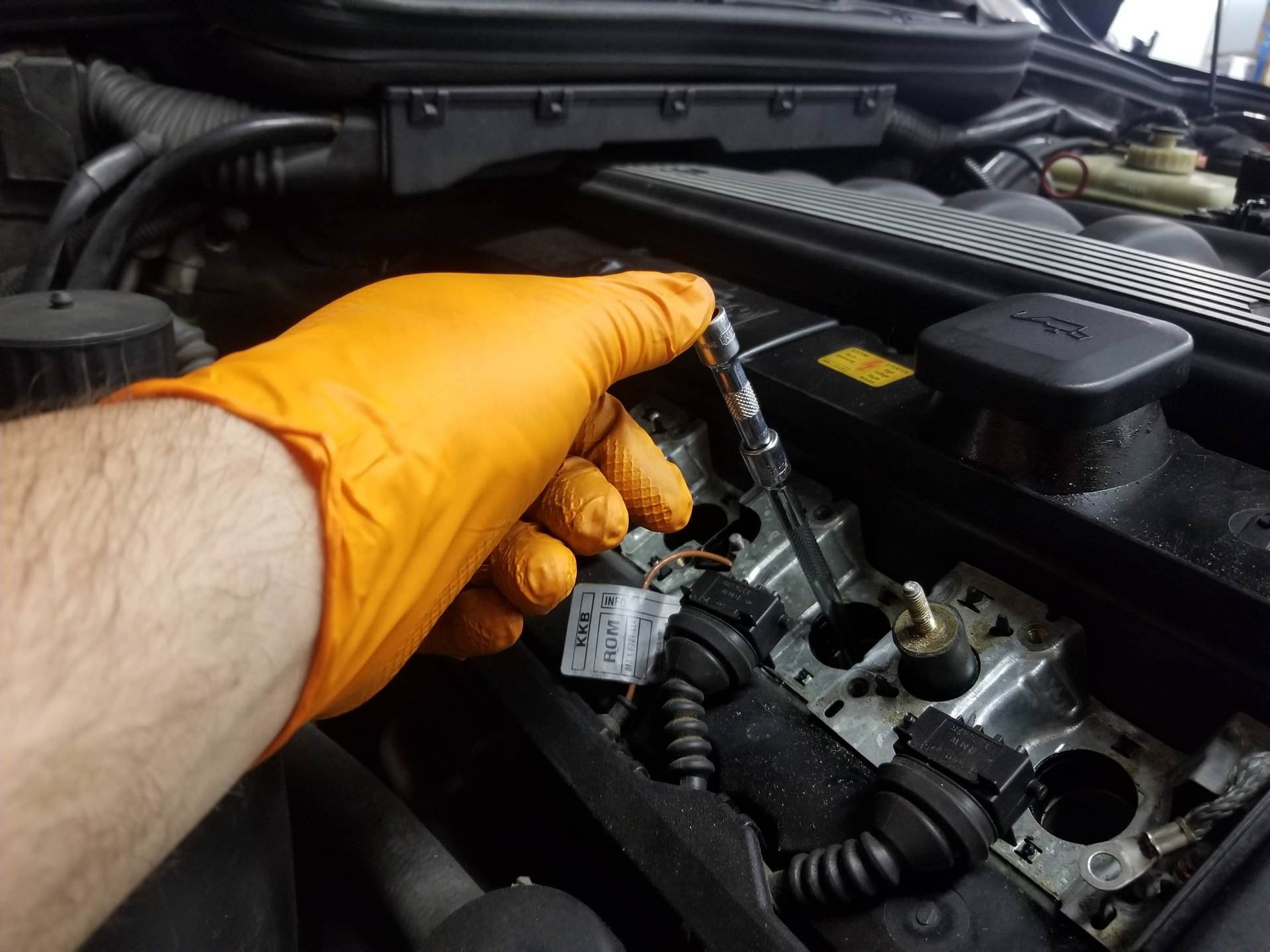 Once the compression gauge is hooked up, crank the engine over a few times. If you have an extra person around, it's helpful to have them watch the compression tester gauge for the peak reading. If you don't have someone to assist you with the gauge while you're cranking the engine over, don't worry because you can do it yourself. Five to six revolutions of the engine are all you will need. Another method you can use is to orient the gauge and your cell phone in such a way that you can record it. Then you have an easy reference that you can go back to later. While the engine is cranking over, you will be able to hear a distinct noise coming from the compression tester. I use this as the cue that the cylinder went through one full revolution.

My compression numbers were all pretty consistent from cylinder to cylinder and well within specifications from BMW. The tests across all six were: 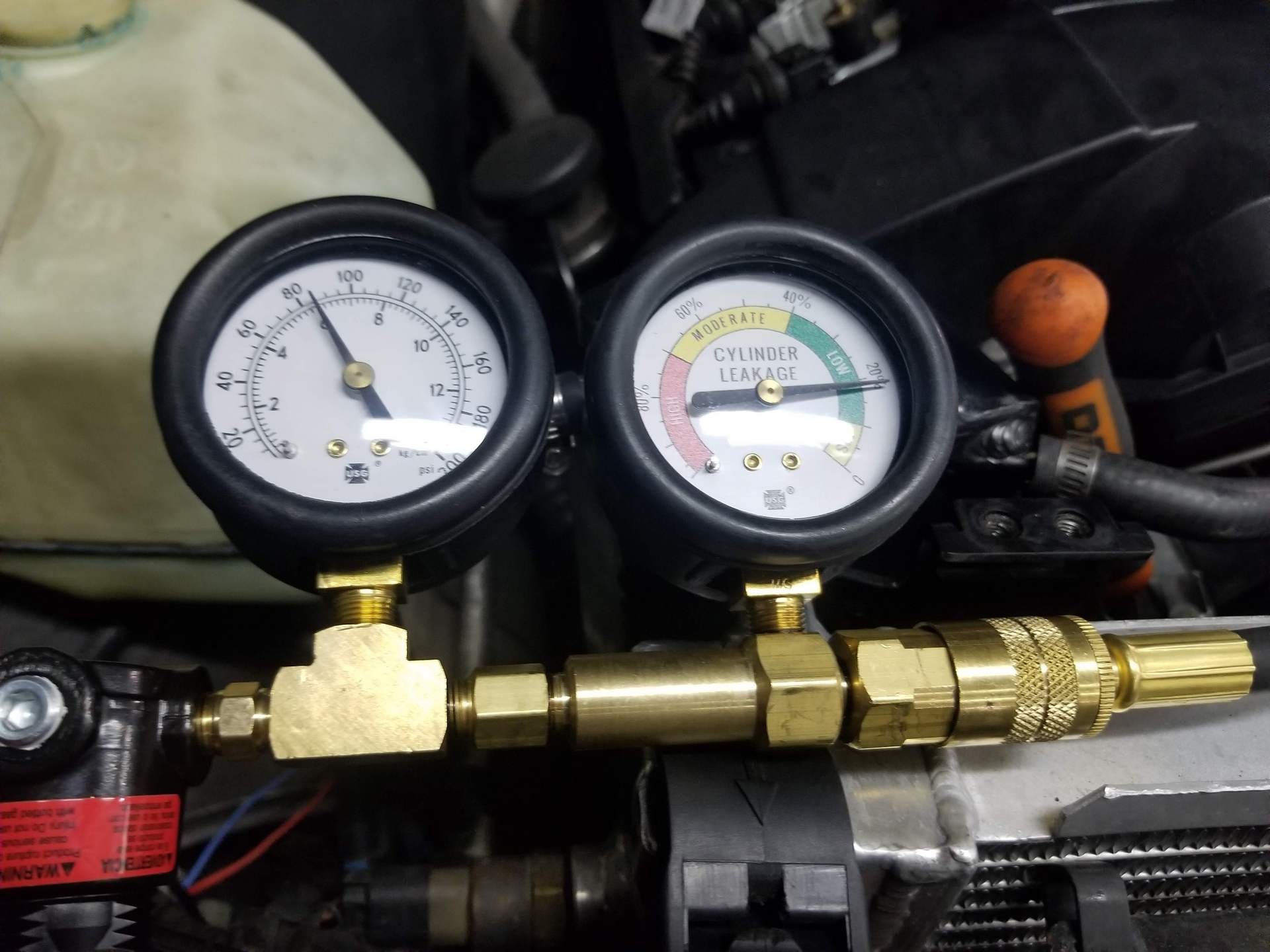 When aligning the engine to TDC, it's easiest to remove the valve cover to see that the cam lobes are off of the lifters. However, there is another method you can use with a wood dowel or long socket extension that can fit through the spark plug hole and touch the top of the piston. Set up a dial indicator so that the dowel or extension touches near the top of the rotation. Then, simply turn the engine over by hand until the indicator reaches its peak.

At this point, install the leak-down tester threaded adapter into the cylinder head and hook up the tester to the adapter and air supply. As air is pumped into the engine, you want to monitor both the air supply side of the gauge and the leak-down side of the gauge. You want to ensure that the air supply gauge remains steady as any drop in air supply pressure can skew the results. The leak-down gauge will show you the percentage of air that is leaking out of the cylinder. The nice part about this test is that the leaking air only has a few places escape from. Each type of leak can lead you to the next step in diagnosing an engine performance problem. Here are a few examples of leaks that you can detect with a leak down tester:

My E36 leak-down test results were pretty strong, and I'm satisfied that the engine is still in good health. It really shouldn't require any major work to bring it back within specifications. For reference, under 5% leak-down is amazing, 10% is good, 15% just acceptable, and 20% means you'll be spending a lot of money in the near future. The exact results of my test were:

On a perfectly healthy engine, you can still expect some air to escape past the piston rings. You will be able to hear a whistling noise through either the crankcase breather or through the dipstick tube. Overall, the leak-down test will give you detailed information to determine the health of your engine and help pinpoint a failure during the diagnostic process. Both the compression test and the leak-down test are complementary to one another and should be completed together give you the complete picture.

With these better than expected results, I'm confident going through with the build of my "EDirty6". If you'd like to keep up with my build, you can do so right here on the blog and by subscribing to our YouTube channel.