Early fuel injected Volkswagens have the most ingenious fuel delivery system I've ever seen. The system worked so well, in fact, that it was used in pretty much everything Volkswagen, Audi, Mercedes, and BMW put out – to name a few manufacturers – for decades. Forty years later, these cars are still on the road, and still deliver good results, both in terms of driveability and fuel economy. The system only has a few major components, and they can all be easily checked, if you have a few basic tools and a good multimeter. 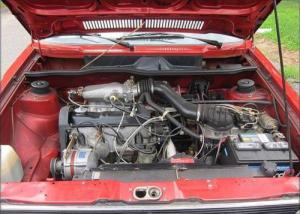 The system I'll be talking about is K-Jetronic, and came in the early water-cooled Volkswagens and Audis, from the late 70s to early 90s. (Audi 80, VW Rabbit, Scirocco, etc.) CIS, or continuous injection system, is a method of fuel injection which is very different from modern cars. Fuel is continuously sprayed, not in short pulses at specific intervals like newer cars. The air intake stream controls the volume of fuel, the coolant temperature dictates when to use oxygen sensor regulation, and the oxygen sensor regulation further controls the volume of fuel. It's a tight system of checks and balances, capable of correcting itself, using only a handful of electronic components.

Air intake leaks are a nuisance on any car, but can be especially problematic for your CIS. On a newer car, air intake is metered by either a mass airflow meter, which reads the mass of the air coming in, or a manifold absolute pressure sensor, which does exactly what it sounds like. Air intake is read, and fuel quantity is calculated through the engine computer. On a CIS engine, the air intake lifts a plunger, and fuel is injected in varying quantities depending on the position of the plunger. Should you have an air intake or vacuum leak, the plunger will not lift fully, and your engine will run lean, or potentially not start, depending on the severity of the vacuum leak. 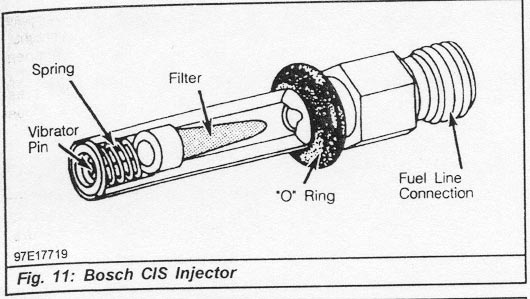 The fuel injectors are under constant pressure, and pretty high pressure at that. If you have an issue with hot starts, after leaving the car for about thirty minutes, your injectors may be at fault. The injectors are designed to hold pressure until the plunger is lifted, and the pressure is increased, causing the injectors to spray out – basically a controlled leak. If your injectors leak, they'll flood the engine, and you'll get a very rough start, which will smooth out after a few seconds.

It should spray a nice cone of gasoline

Checking your injectors is very easy. Get the engine super hot, then shut it off. Pull the intake boot off the fuel distributor, and pull up your injectors. Be careful popping the injectors out, there's plastic all around the engine and fuel under high pressure! Lay all four injectors on your valve cover, with a rag underneath the tips. Hop in the car and turn the key on. If you see drips at the tips of your injectors, they're leaking an need to be replaced. If they're not leaking and you want to check the flow pattern, put a magnet on the plunger plate and lift it up with the key on. Make sure you're in a well-ventilated area, by the way. You'll see the injectors spraying more and more as you lift the plate – watch it carefully. It should look like a nice cone of gasoline coming off the tips. If the spray pattern looks like a garden hose with a thumb over the tip, they should be replaced.

Troubleshooting these systems is very easy. If you don't have a Bentley manual for your car yet, I cannot recommend it highly enough. The Bentley manual is the first and last word on everything you need to know about your car, and using it once to diagnose your own car will more than pay for itself. With a Bentley manual, a basic set of tools, and a multimeter, you can keep your classic car on the road for decades to come.