If you've been paying attention to Volkswagen the last few years, you've surely noticed their gradual shift to direct injection. It offers better fuel economy, more power, and lower emissions than standard port injection. But this technology is so different from the old that not many people know how exactly how it works.

Volkswagen's first gas engine to feature direct injection (FSI) was the BPY 2.0T found in the Mk5 GTI, Mk5 GLI, A3, 06-09 Passat, and countless others. These engines offered no turbo lag, flat torque curves, and ultra low emissions. So how do they do it?

The answer is simple: Super high fuel pressure. In an FSI engine, the fuel pressure at the rail can reach up to 110 bar (1600 PSI), creating a full atomization of the fuel. These cars do not carry that full pressure from the tank though. The first pump, a traditional in tank electric pump, puts out around 4 bar (60 PSI) to the second pump. A special lobe on the end of the camshaft drives the secondary pump to feed the injectors their full pressure. 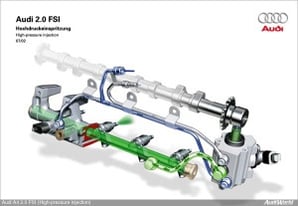 Unlike traditional port injection, in FSI, the injectors are underneath the intake manifold, below the valves, pointed directly into the combustion chamber. They are still solenoids, but they open and close much faster than the old style (.77 milliseconds!). By pointing the fuel directly into the combustion chamber at a ridiculously high pressure, you can more efficiently burn it, increasing power and fuel economy, while reducing emissions from unburned fuel and turbo lag. 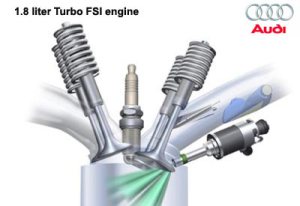 In the Volkswagen and Audi FSI motors, the air can also be manipulated by flaps in the intake manifold. This allows the air to enter at a certain angle and velocity to be able to get the right "swirl" with the fuel on the upstroke of the piston. The computer reads the position of the piston and camshaft and the fuel pressure, and determines when and for how long to spray fuel, and then when to fire the spark plug. All this leads to a reduction of turbo lag and more power with less fuel. 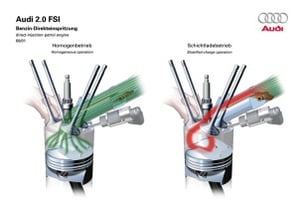 But these great leaps come at a cost. Since the injectors are not on the intake manifold or above the valves, they do not spray the tops of the intake valves to clean and cool them. The end result is carbon buildup. The FSI intake valves run much hotter, and without the detergents in fuel cleaning the tops of them, whatever hydrocarbons are floating around (oil vapor, unburned fuel, exhaust, etc.) stick to the valve stems and to the tops of the valves. When this happens, the valves don't seat properly, and compression is lost, creating a misfire. 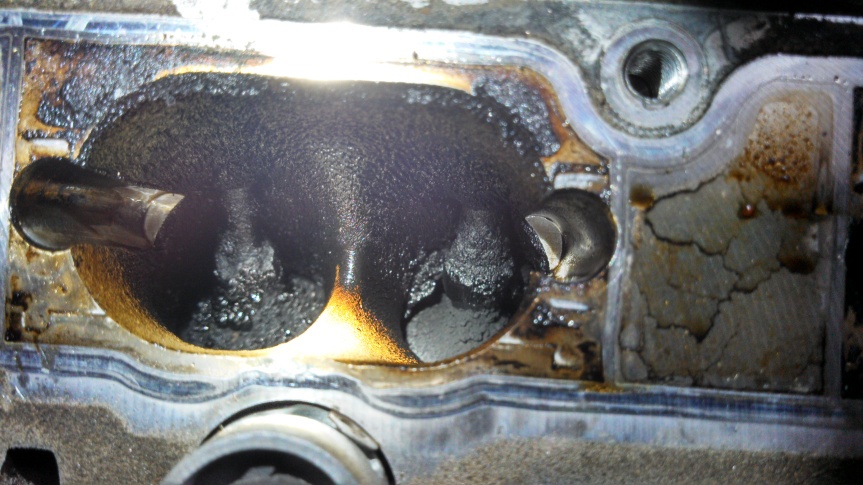 Carbon buildup on the intake valves of an 06 Audi A3

It is not uncommon to see carbon misfires on an older five-valve Audi or Volkswagen, but these have always been able to be cleaned without too much labor. In an FSI motor, the intake needs to be removed, and carbon painfully chipped away for hours, until the valves look clean again. This process is time consuming, expensive, and will happen again 100k or so after the first cleaning.

So, in summary, direct injection is the way of the future. Just like any great technology, it has its bugs, which are being worked out on the newer motors. The FSI motors are certainly a product of emissions regulations, but still offer plenty of fun to the driver.