The diagram shows an example of how an engine responds when under acceleration. 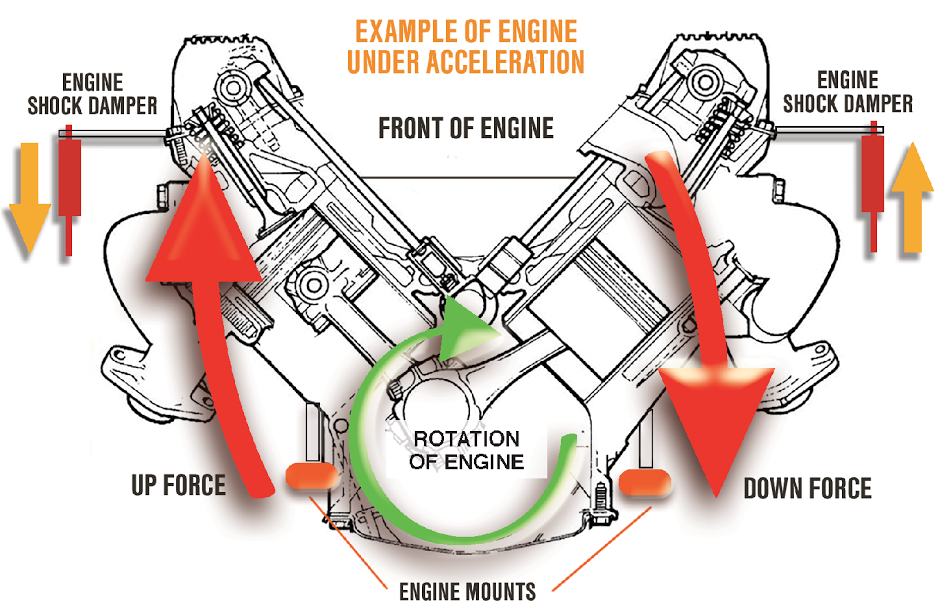 The engine shocks are readily available and should be replaced in the event they are original or have failed. It should be noted that Mercedes varied the location of the dampers on the 450SL over time. A number of models had the torque dampers mounted down lower while the 1975 450SL had them mounted in the general location of the rendering above. In as much, the 450SL engine shock dampers that are available, vary in size as do the necessary mounting hardware kits that vary slightly in design and fitment. Always be sure to confirm you chassis number and whether or not your version is a California or Federal model.

While the engine dampers are generally under little strain, they do kick into action under very hard acceleration. As the engine “rotates”, the engine wants to lift up on one side hence “pressing” down on the other. The dampers control that twisting/lifting motion just as the road shocks control the up and down movement of the wheels.

The engine shocks in my 1975 450SL appear to be original and had no ability to control the engine torque any longer. While it may not seem necessary to replace them, unlike engine mounts (right or left), the damper does control very unwanted movement of the engine and attached transmission. The constant “twisting” of the engine with out functioning engine torque dampers puts undue strain on the engine and transmission mounts and reduces the overall comfort of ones overall driving experience. NOTE: The engine shock dampers do not replace the engine mounts which serve to control vibration, not twisting movement. 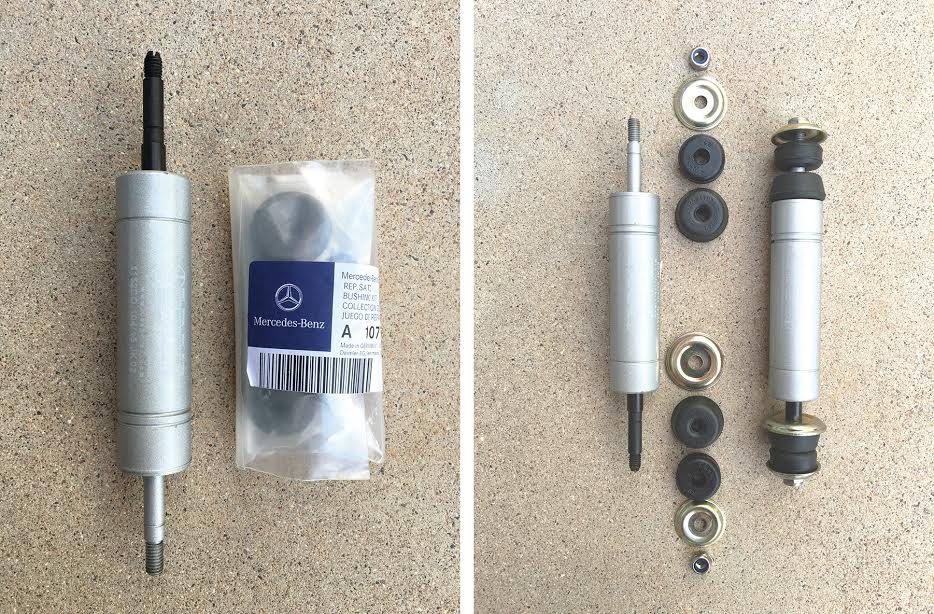 This image show the left side of the 1975 Mercedes-Benz 450SL V8 engine and installed torque damper. The top nut in this image has not been tightened down as of yet. Make sure the nuts are properly tightened to keep the damper from rocking around. 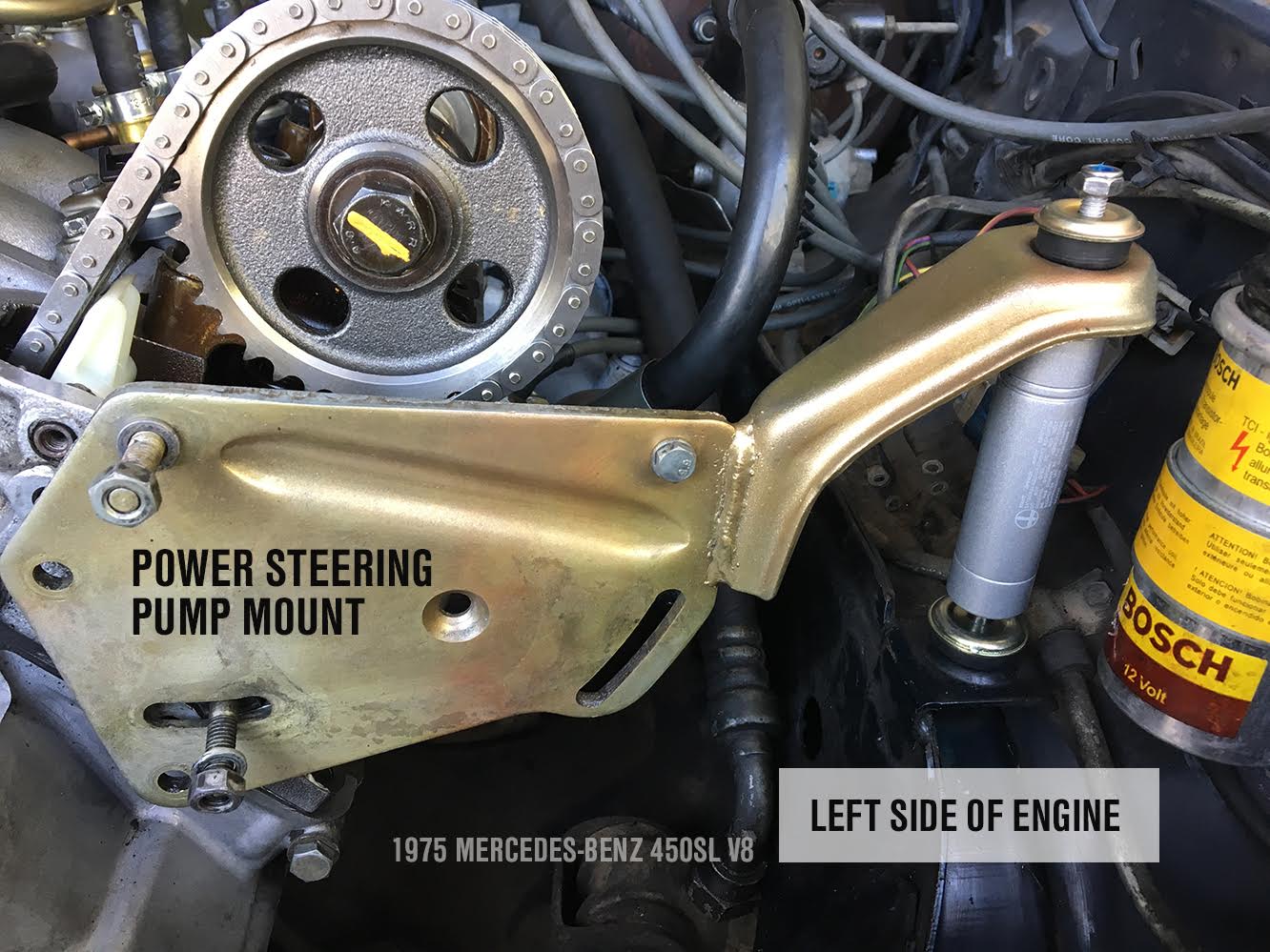 The engine shock damper should be very stable when gently wiggled. It does make it much easier to install the dampers with the mounting brackets removed.

The image below shows the mounting bracket already installed and the option to still install the damper. To do this, gently compress the damper plunger rod just to the stopping points and do not force. REMEMBER: Fit the necessary rubber “buffers” prior to inserting the shock damper. Insert the top end of the damper in to the upper mounting point. If you choose this method, it will be much, much harder to attach the bottom nut. Although it might appear more involved to remove the alternator, it will be time well spent in the end. 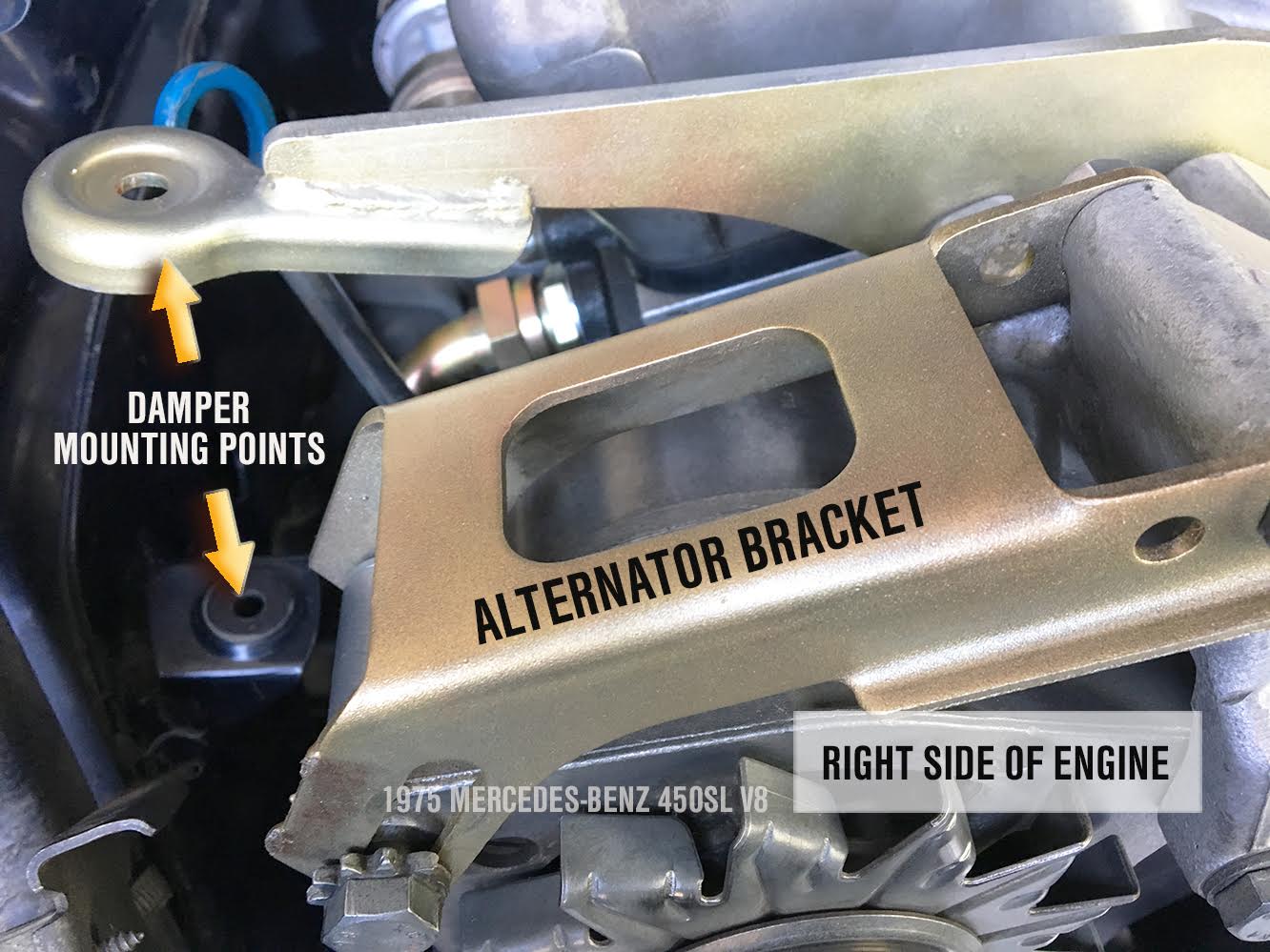 It will also be beneficial to remove the bracket that holds the coolant overflow tank and wiring loom to the starter motor. 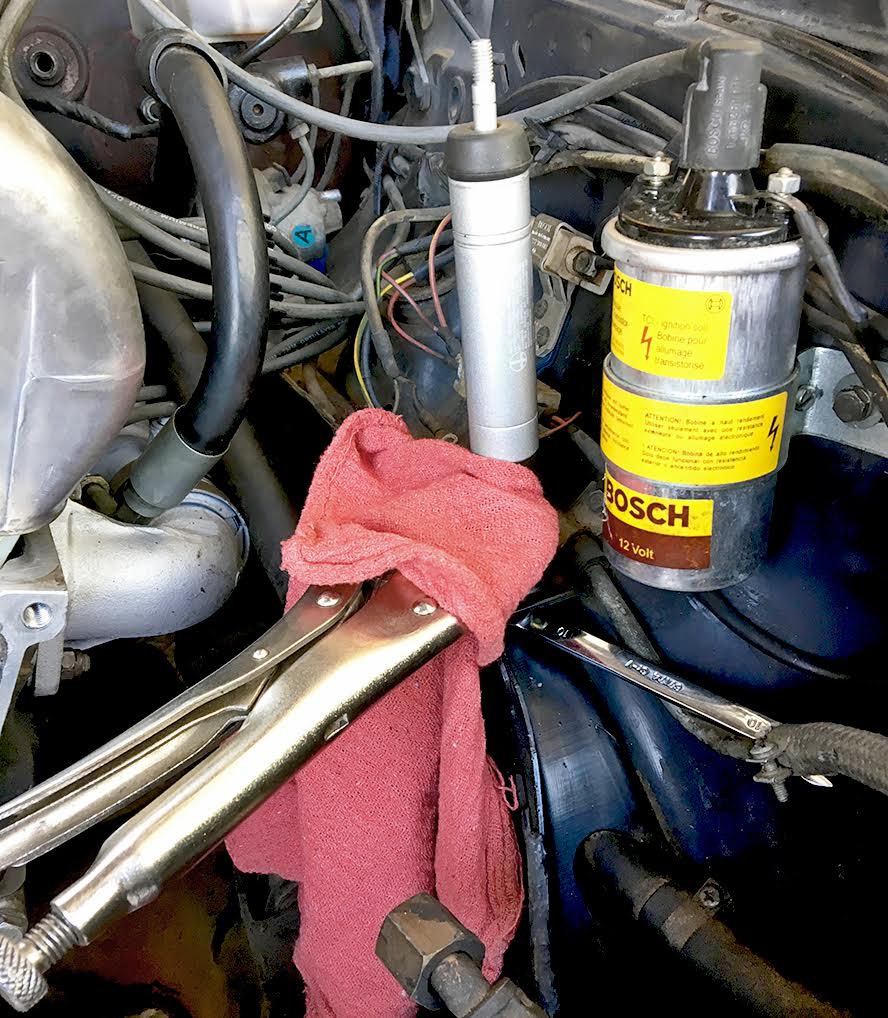 The final image shows the damper installed. Once both engine shock dampers have been securely tightened you are ready to go! 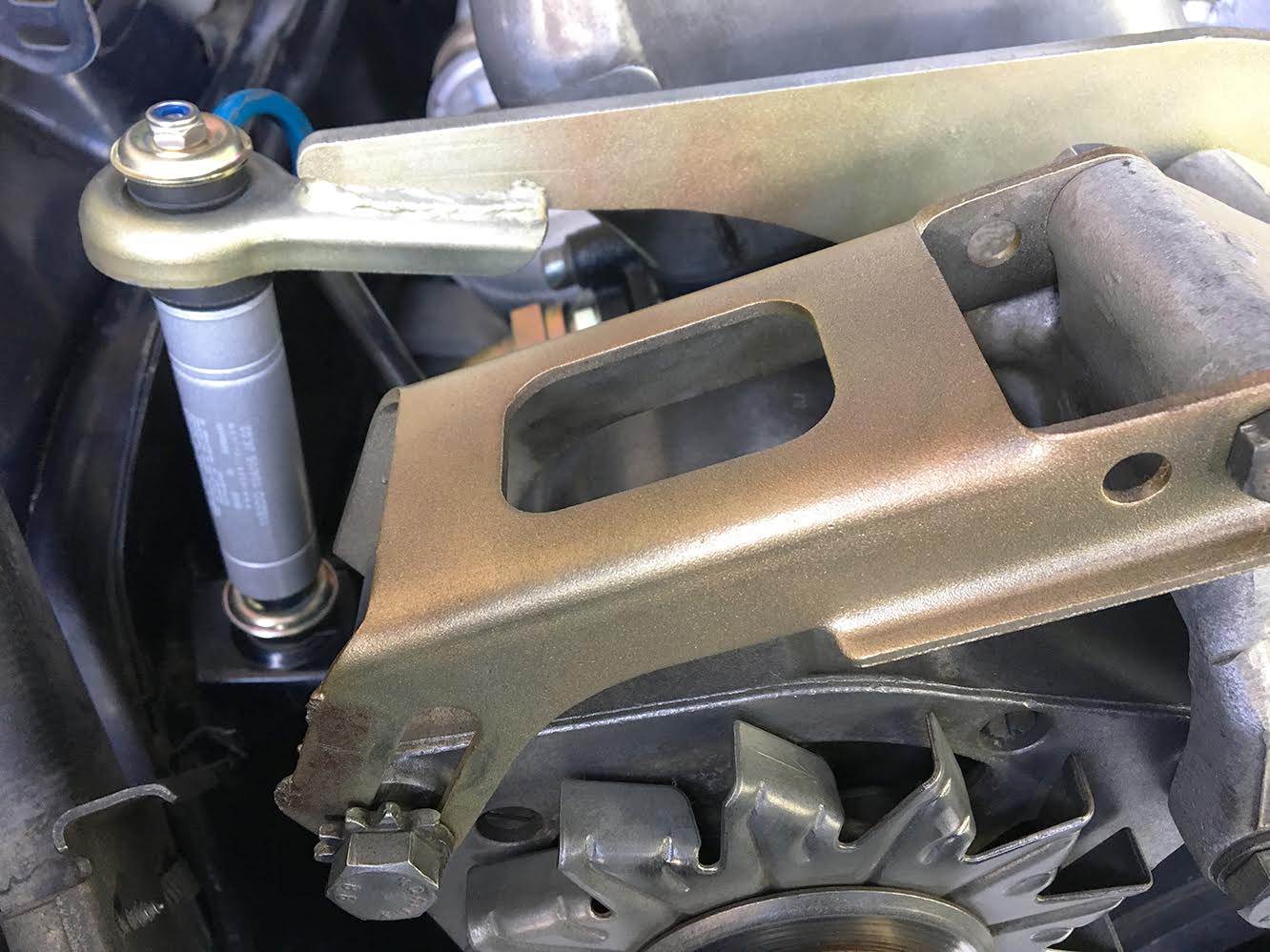 TIP: Be sure all metal mounting surfaces are free of grease and dirt. Petroleum based products and grit will shorten the life of the rubber components that are in contact with them. 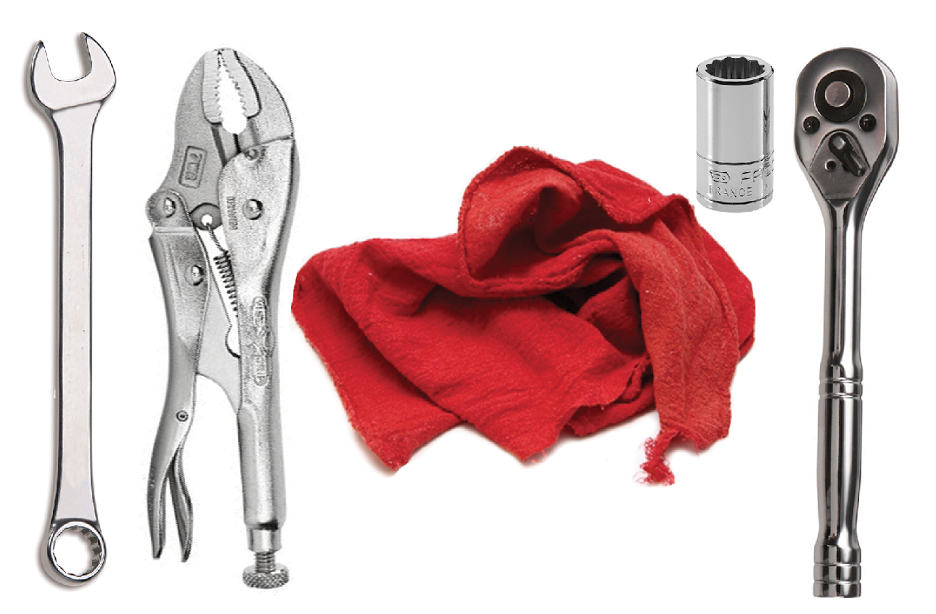