Air-cooled Porsches have been the rage in recent years, but few have as much historical relevance as this 1979 Porsche, chassis code 930 990 0032. Of course, that’s just a bunch of numbers until you look into this racecar’s history. It is one of seven “customer” 935 racecars built by Porsche, and the last one to carry a 930 chassis number. What makes it even more historically relevant is its first owner, Gianpiero Moretti, a man who some regarded more a gentleman racer rather than a professional driver. In case his name doesn’t ring a bell, you’ll probably recognize the name of the company he founded in 1964, Momo.

Moretti’s business success stemmed from his comfortable and highly desirable steering wheel design, which caught the eye of numerous racecar drivers of the era, like Formula 1 driver John Surtees. Moretti’s immense passion for racing along with his company’s brand recognition and popularity made getting behind the wheel to compete in motorsports a wise marketing strategy.

Seeing the trademark red base color adorned with yellow arrow graphics competing on the track cemented Moretti and his brand name into the minds of millions all over the world. 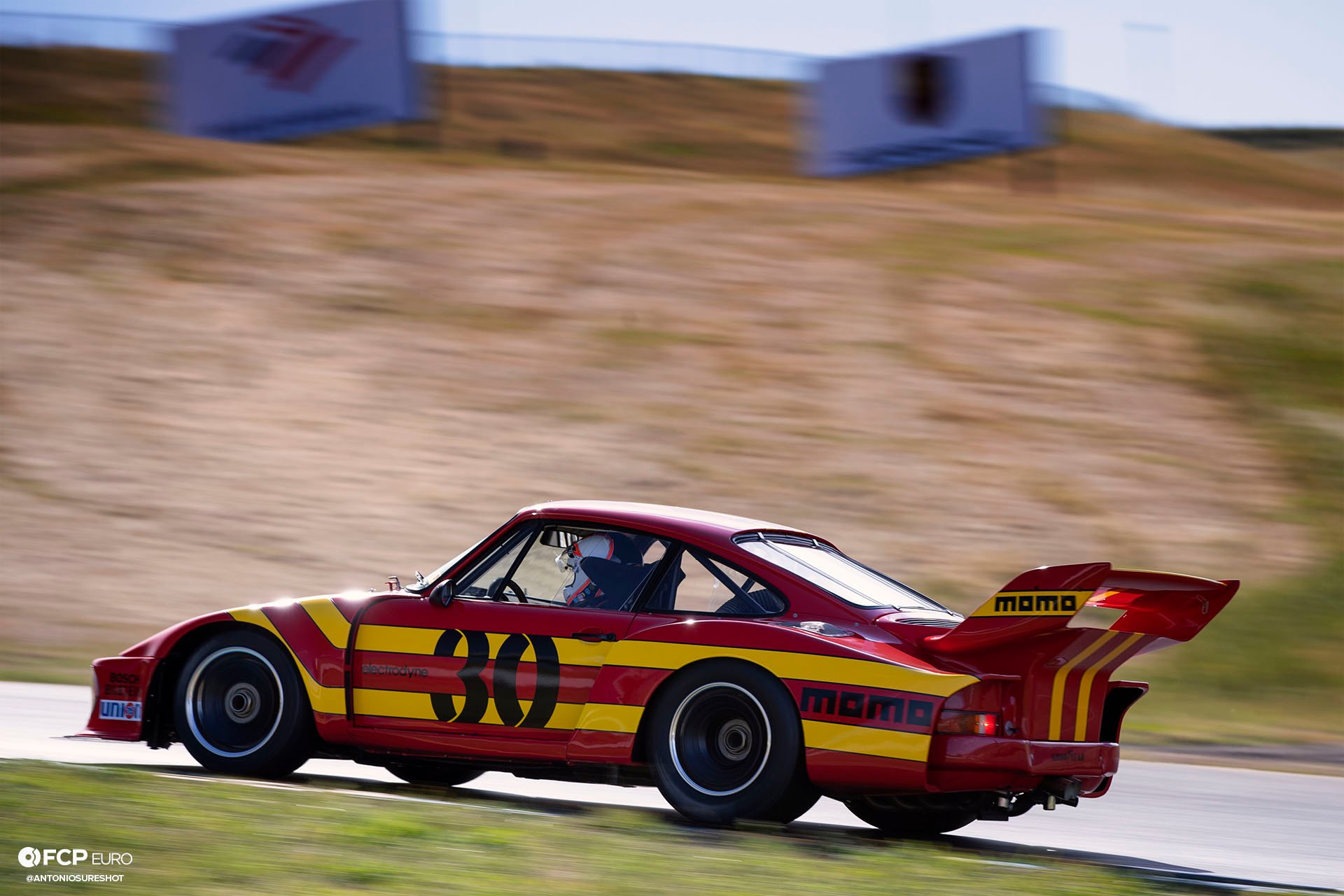 Moretti raced this Porsche 935 at numerous IMSA races in America, the first one in April 1979 at the Road Atlanta 100 Mile Winston GT IMSA race. Moretti finished in fourth place among numerous other 935s and BMW 320 turbos. 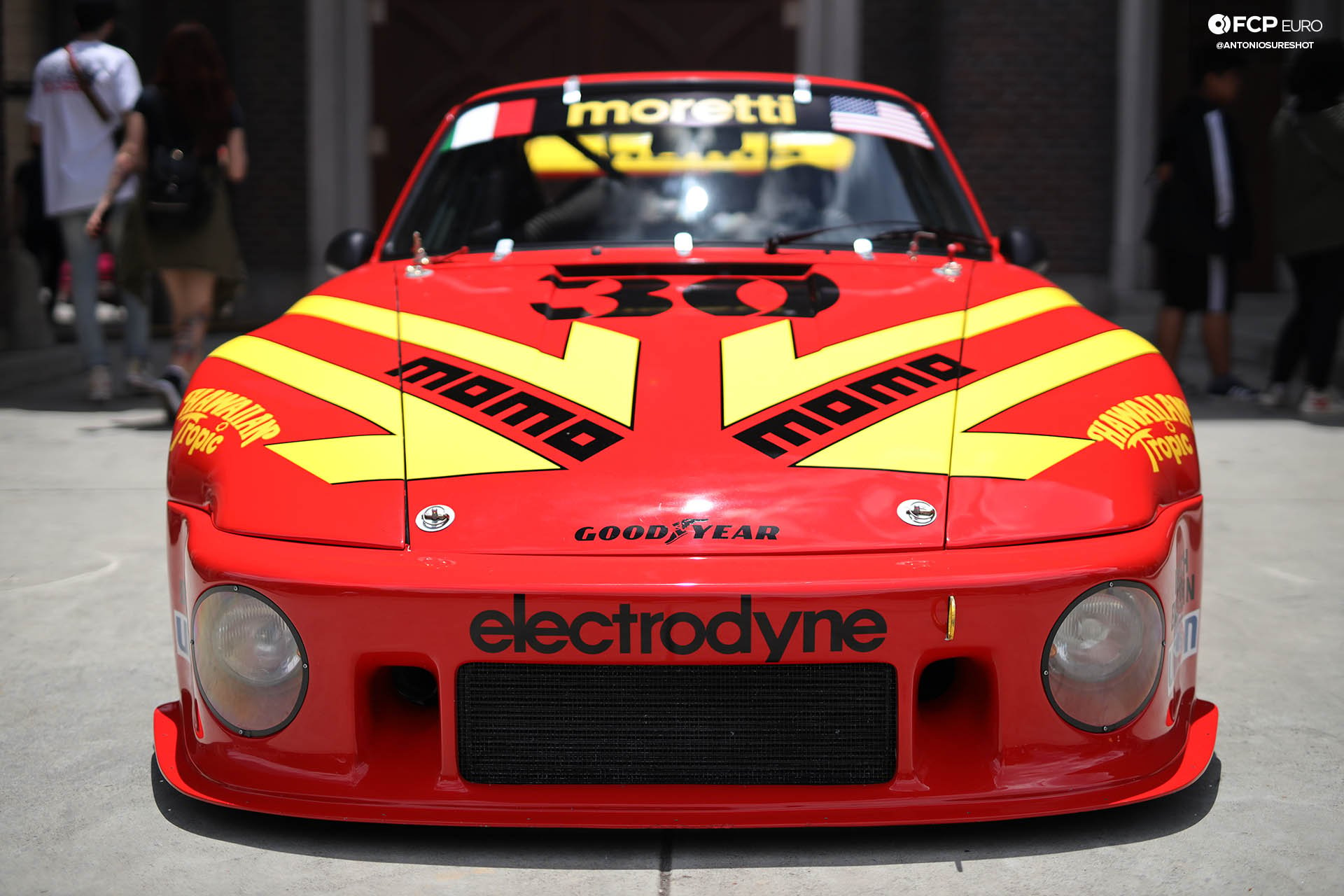 After campaigning in ten other races in the USA, Moretti shipped the 935 to Italy, where he competed in the Giro d’ Italia. Moretti finished third overall and took the top spot in the Group 5 category.

The following year, Moretti bought a 1980 Porsche 935J from Joest Racing, which was located in the Odenwald region of Germany. The new chassis became his primary vehicle in competition, with chassis 930 990 0032 now serving as his backup ride. He commissioned Joest Racing to upgrade the backup chassis in preparation for the new season. 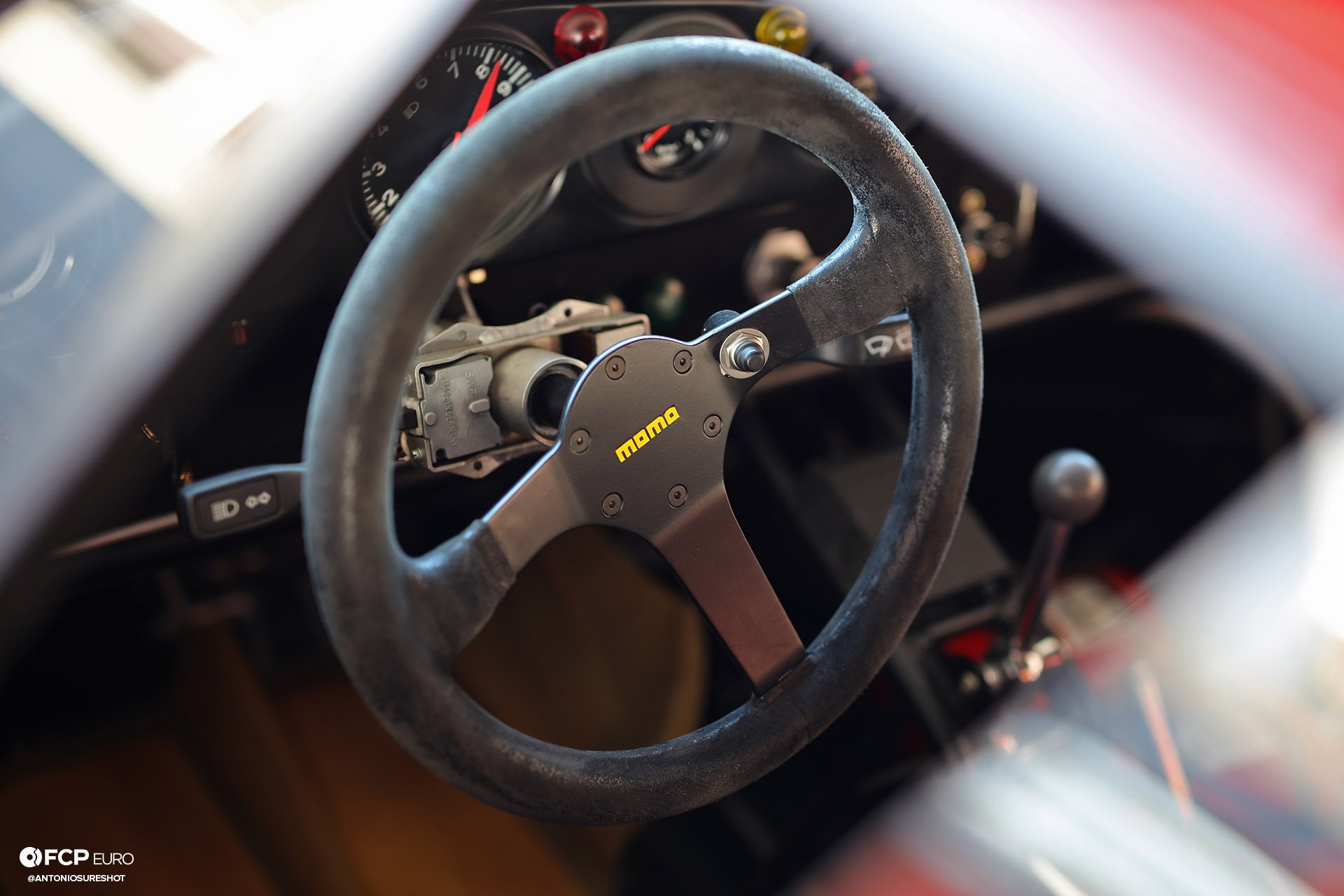 This is Moretti’s signature product, the Momo steering wheel. With a thicker, padded steering wheel covered in either soft leather or suede, many racers found the Momo design to be much more comfortable and an essential enhancement to the driver’s control surfaces. Simple, elegant, and functional.

The unmistakable and classic Porsche five-gauge array sits behind the Momo steering wheel in a standard Porsche dash. A mounting plate with the 935’s manual boost controller, a fire suppression release and brake bias adjustment take the place of what would have been a stereo head unit. 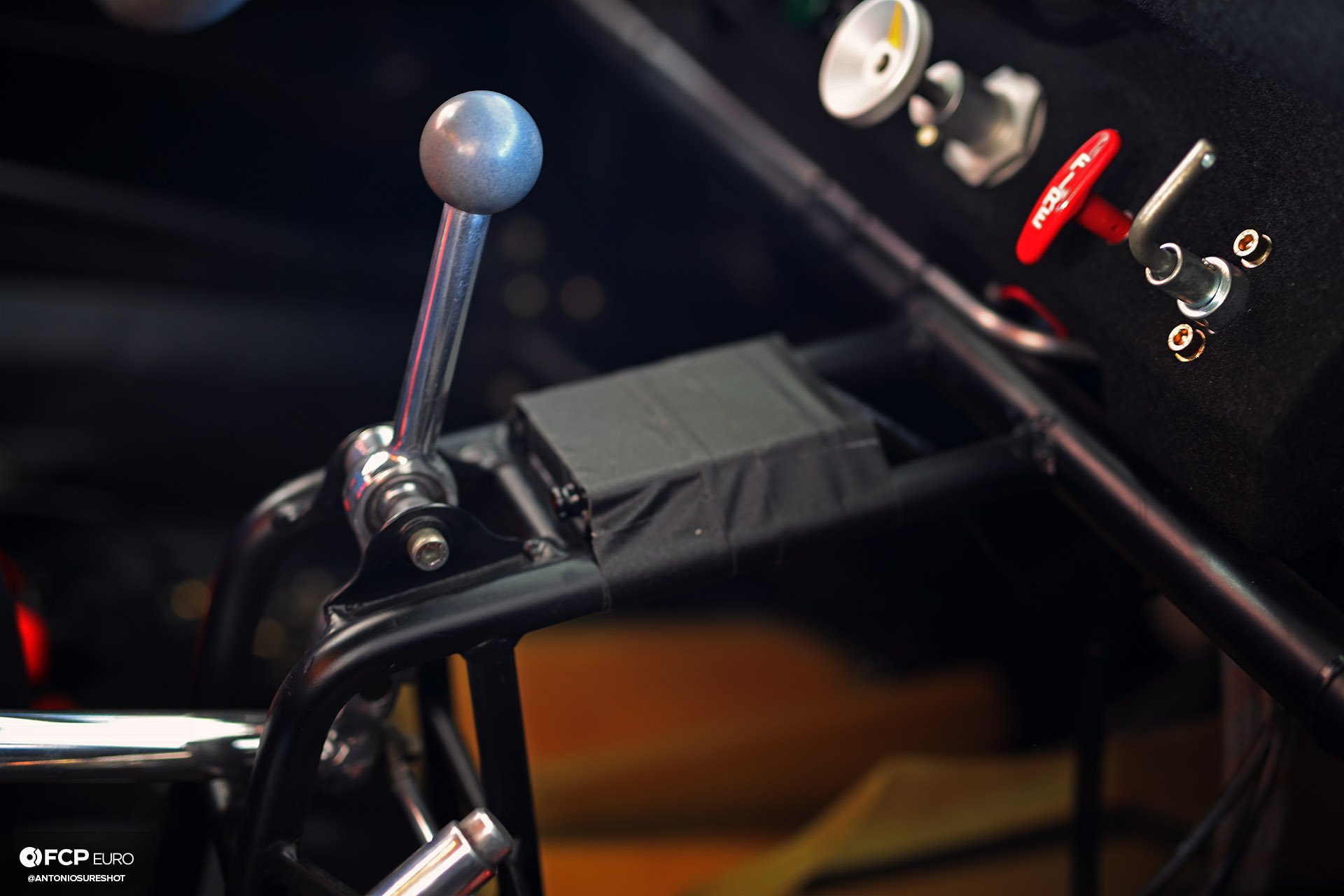 A custom short shifter cage and linkage are positioned within easy reach of the driver’s seat and align with the inverted 935 transmission equipped with an internal oil pump to ensure consistent lubrication of the gears. 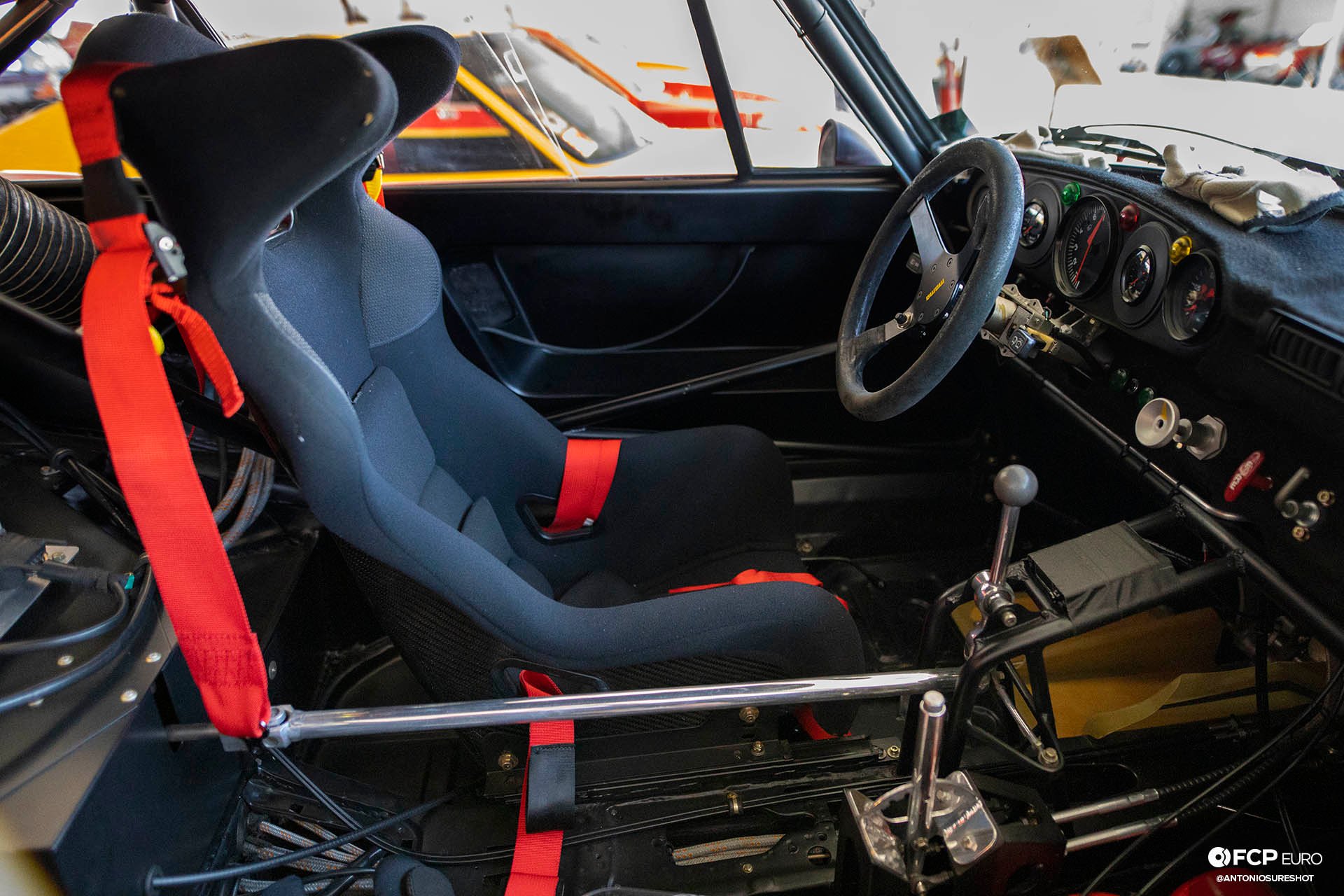 A contemporary OMP race bucket seat with a six-point racing harness secures the driver firmly behind the wheel. Compared to the typical Porsche shift linkage, this 935’s linkage sits much higher, due to the inverted transmission.

Since this 935 had been recently restored and race-prepped, the seats and harnesses needed to be brought up to current safety spec. This is one situation that “period correct” isn’t necessarily desirable, especially since this Porsche is not a museum piece. Interestingly enough, the current owner chose an OMP seat instead of a Momo seat. 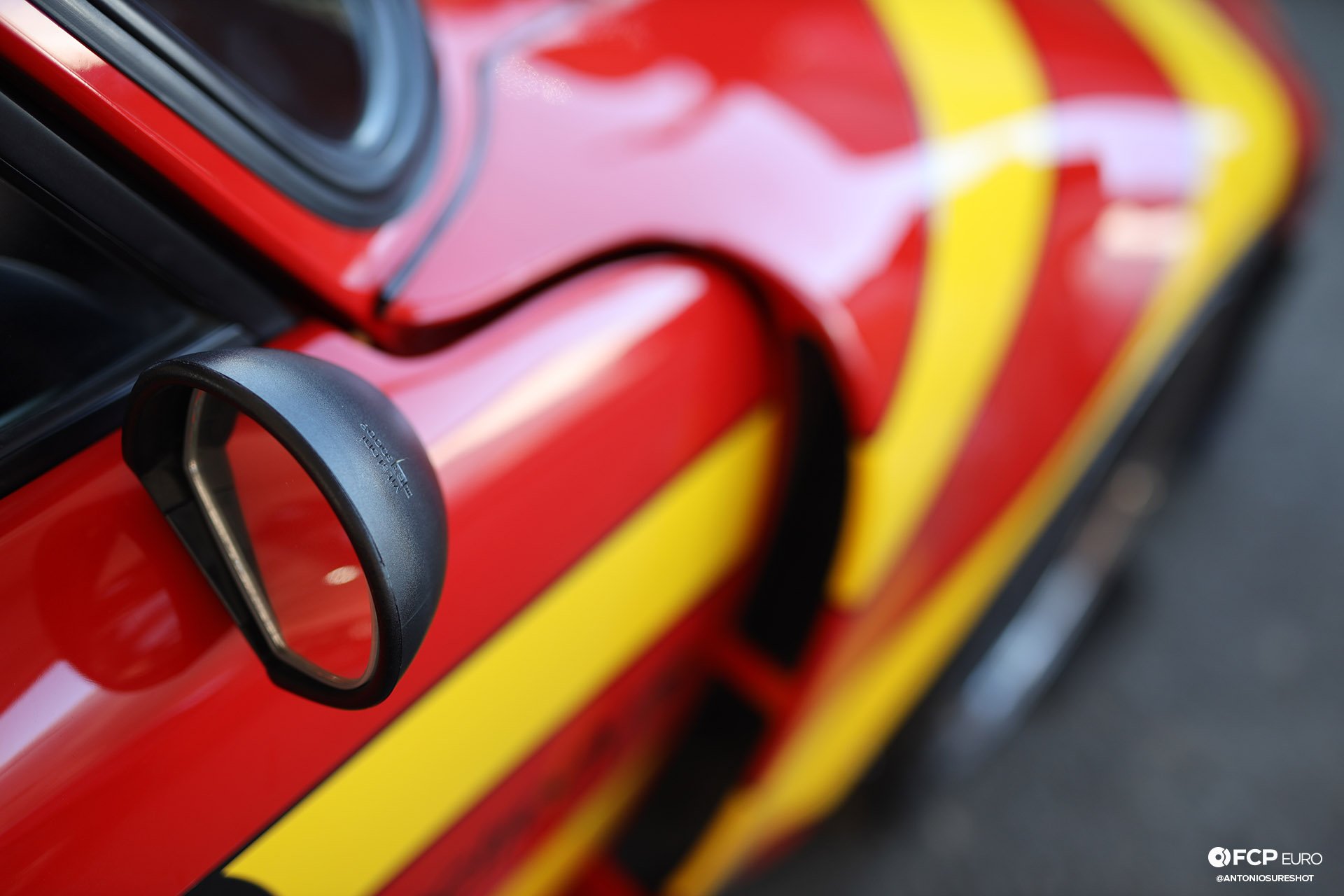 The 935’s wide front fenders are vented to release air pressure built up behind the tires for improved downforce. The black plastic Vitaloni mirrors on the door were a popular choice for aftermarket aero mirror used on many cars in the 1980s.

Symmetrical metal mesh NACA ducts atop both of the massive rear fenders channel cool, clean air to the compressor inlets of the twin turbochargers.

This 935’s 3.0-liter engine was increased to 3.2-liters and equipped with dual Joest Racing intercoolers. Once calibrated with more boost pressure, output increased to 700 horsepower. 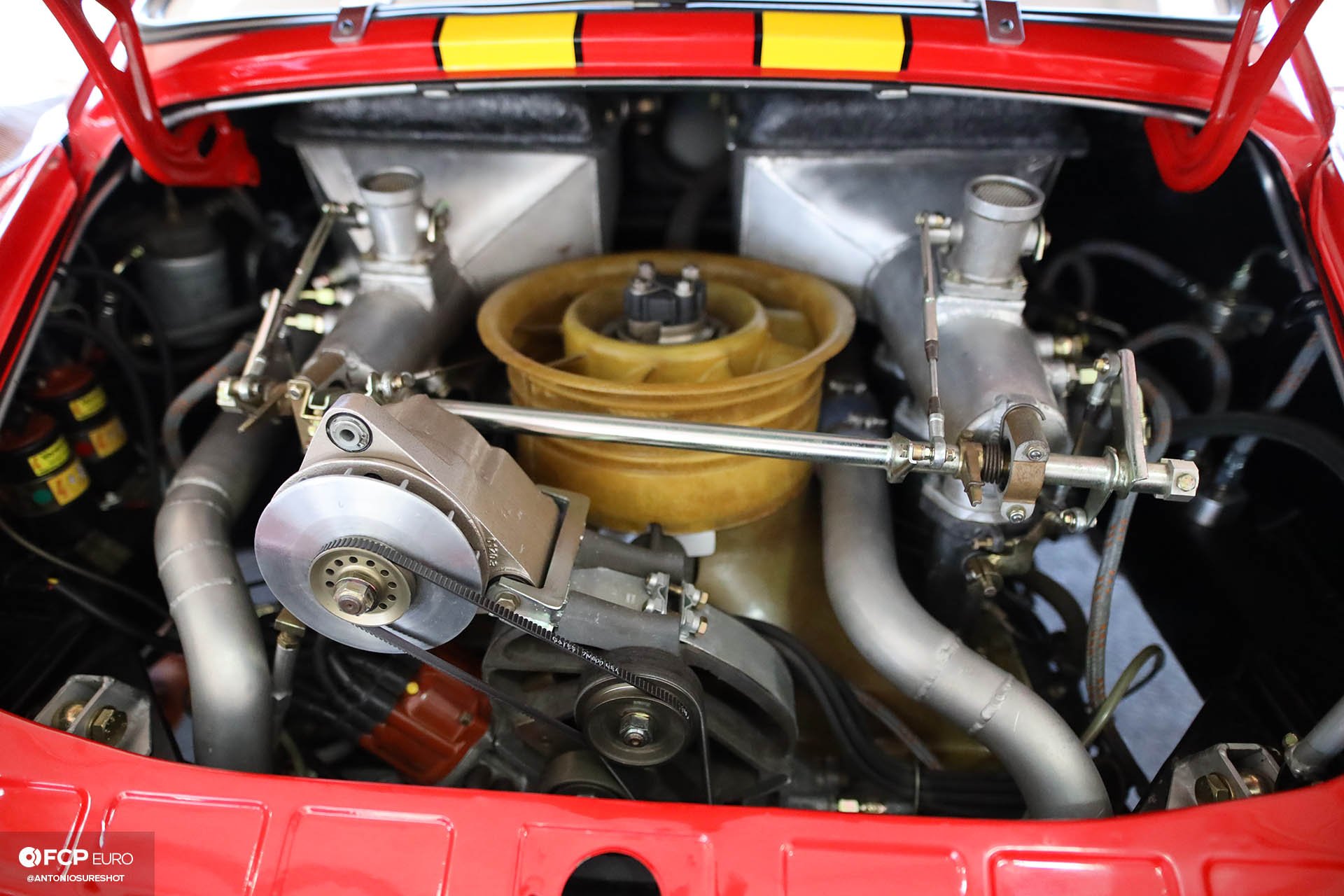 For those familiar with typical Porsche engine configurations, the engine fan usually faces the rear of the engine. By comparison, the 935 engine fan is positioned facing up, drawing air down through the engine lid vents and down onto the cylinder heat sinks for improved heat management. 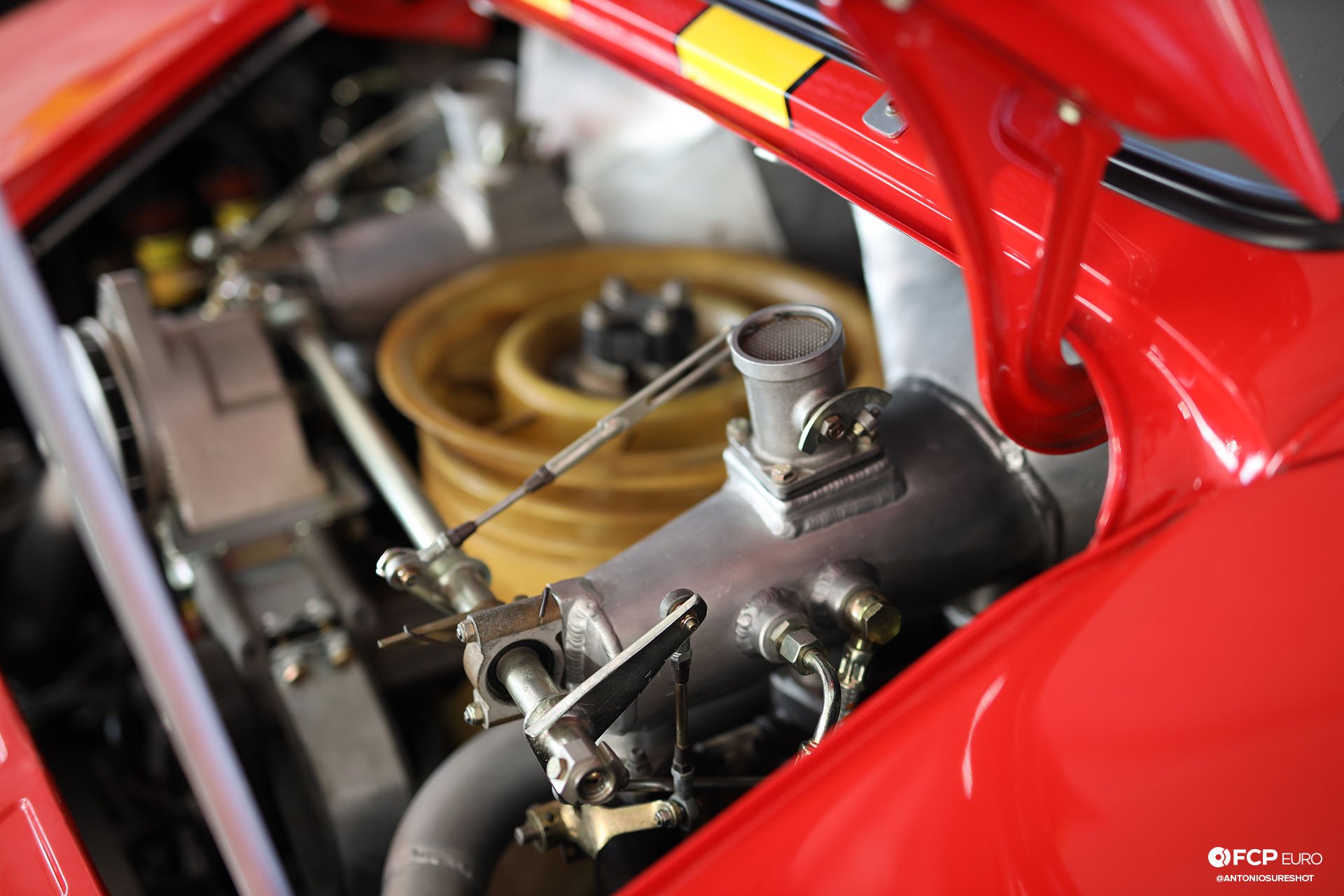 Hard linkage ensures that the bypass valves positioned next to the Joest Racing intercoolers release boost pressure in sync. 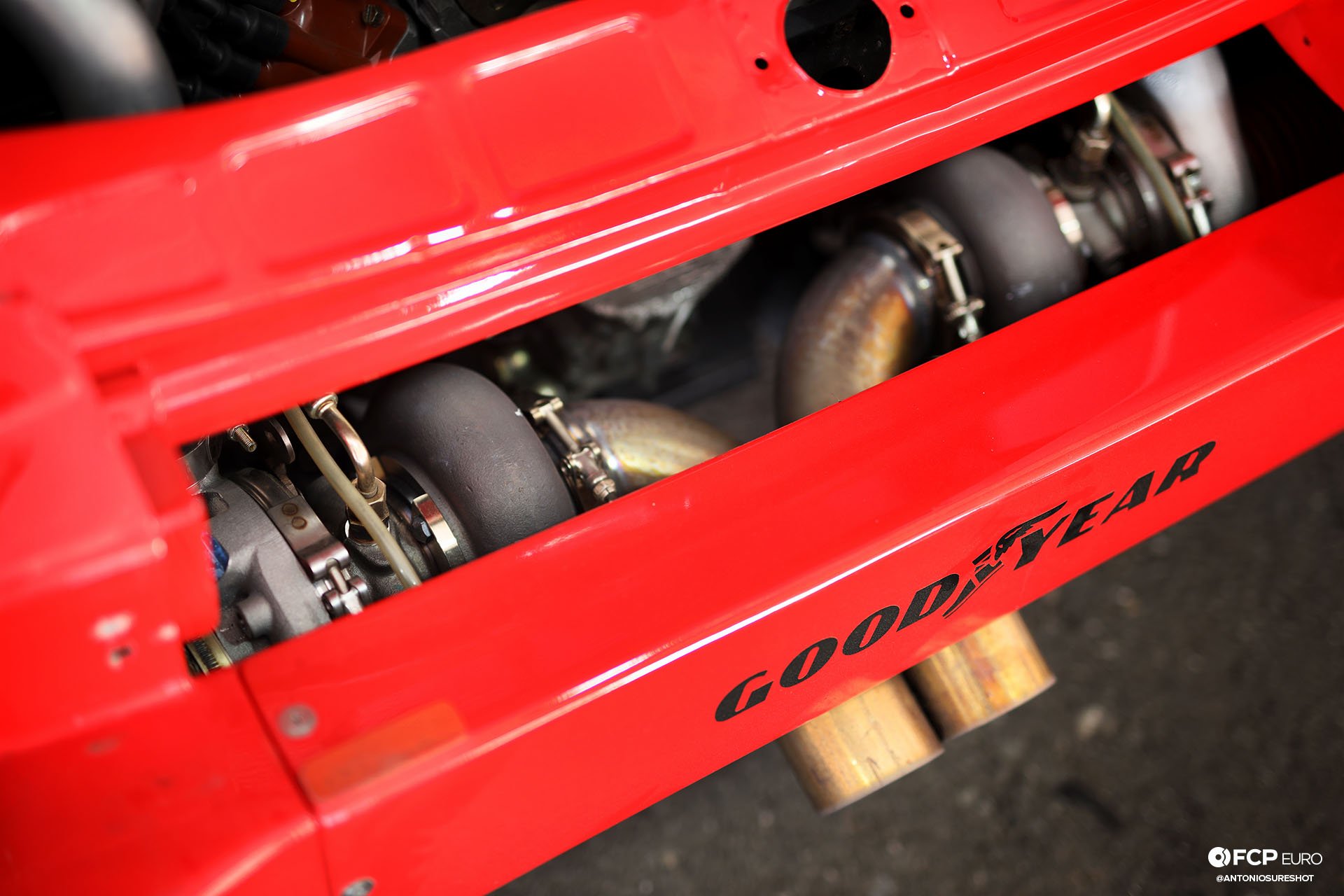 The twin AGP turbochargers reside behind the engine with unresonated turbine discharge pipes in a center exit configuration. To say that this 935 screams around the track is an understatement! 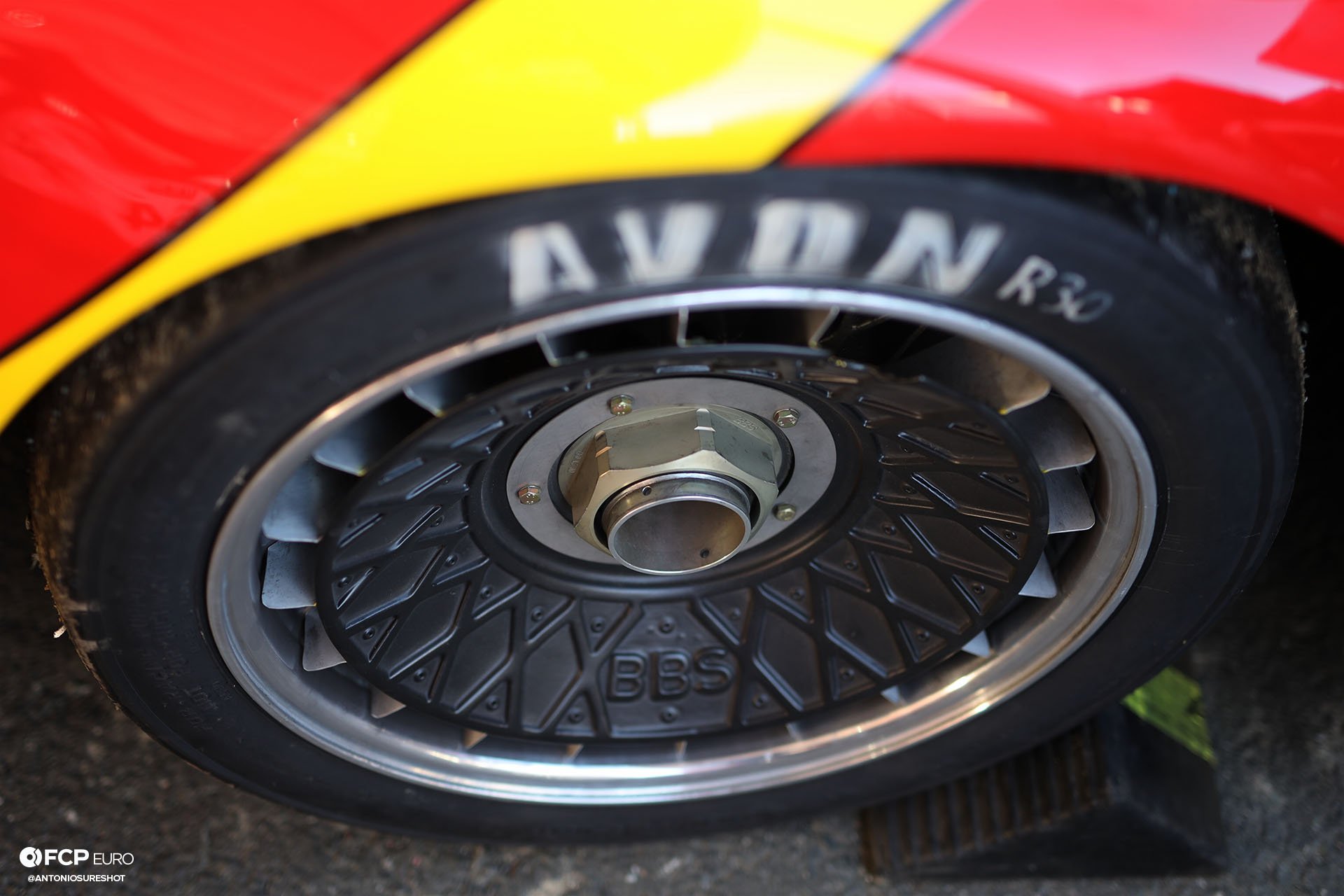 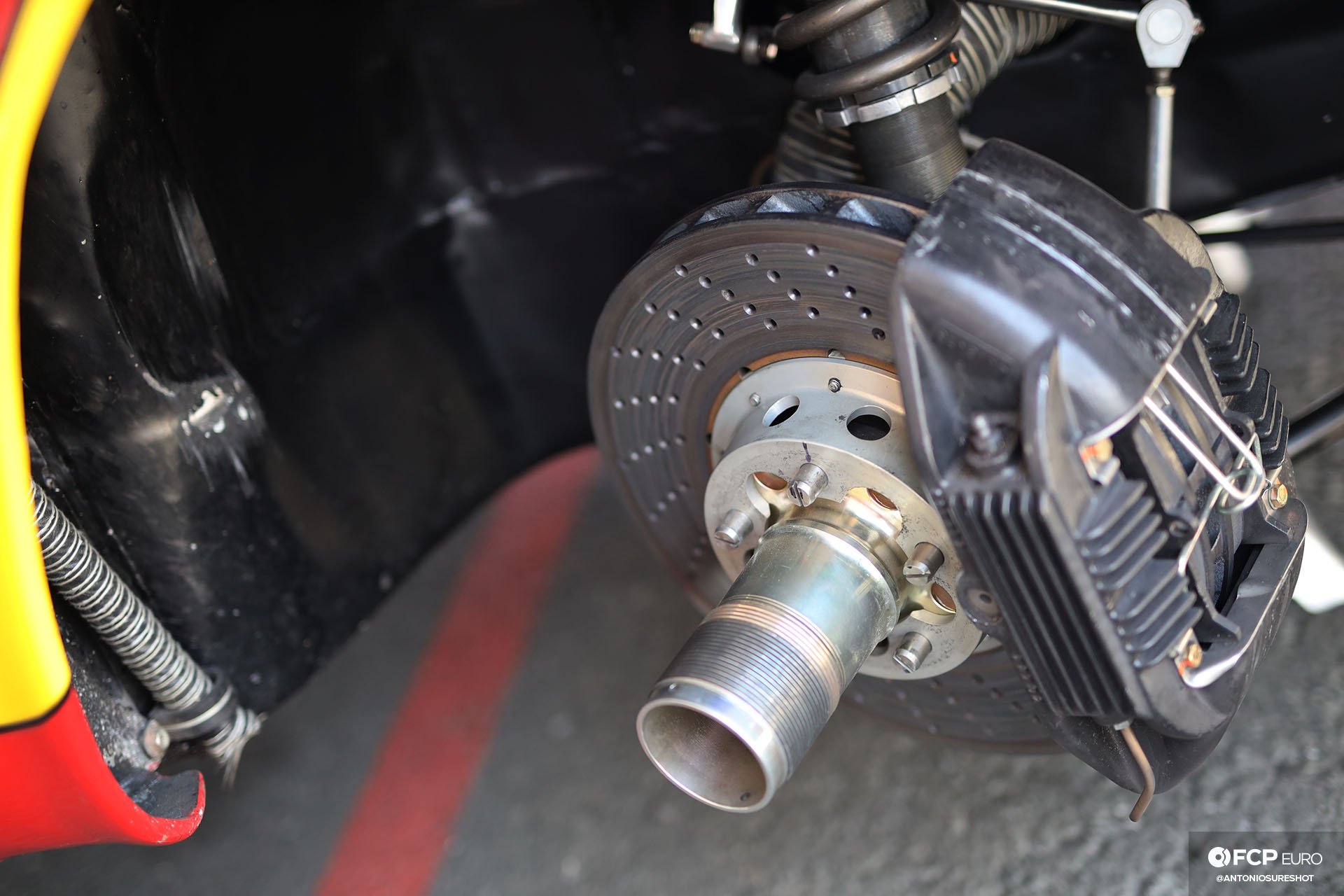 To help with brake heat management, the Porsche 935 brake calipers feature heat sinks, while ducting channels cool air to the back of the two-piece, vented and cross-drilled rotors. 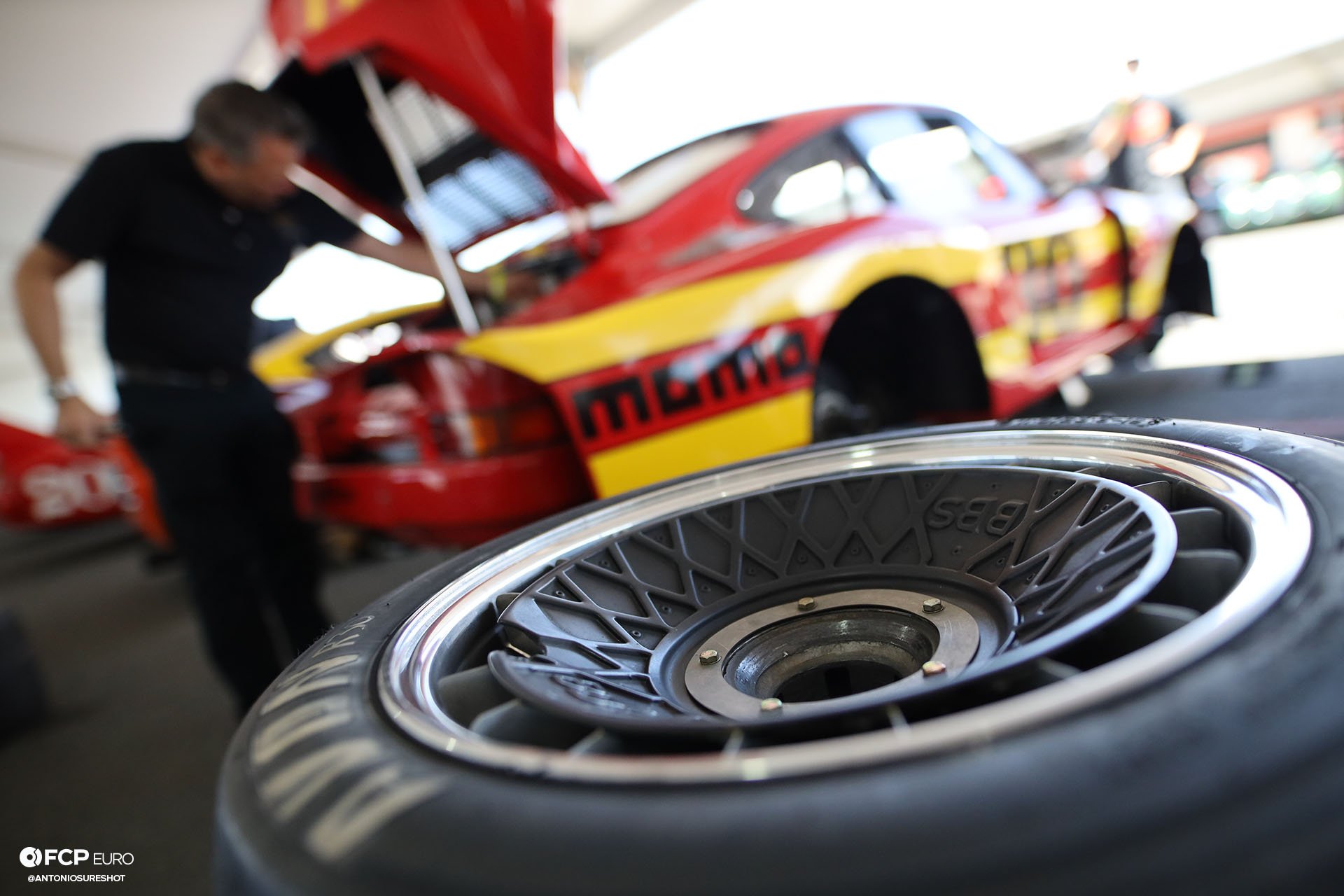 Although this Porsche 935 took a near 30 year hiatus from racing, it has returned to the track, attacking corners and shortening straightaways. 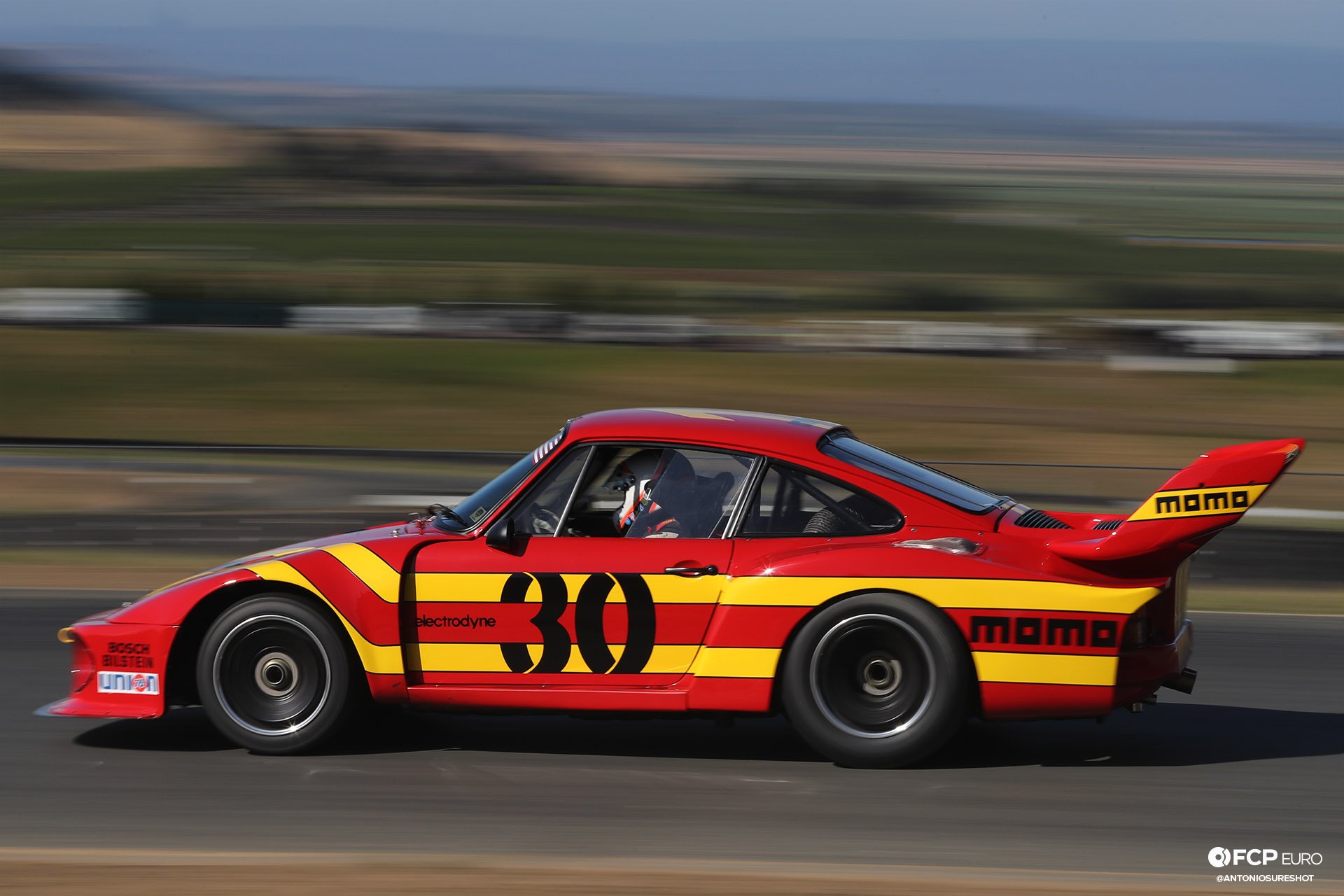 The sixth and current owner of this vintage racer is Alan Terpins. Like Moretti, he is an international businessman and gentleman racer. Alan’s previous racecar, a Porsche RSR, provided a balance of handling and output. When he got the opportunity to own this piece of history on wheels, he jumped at it. 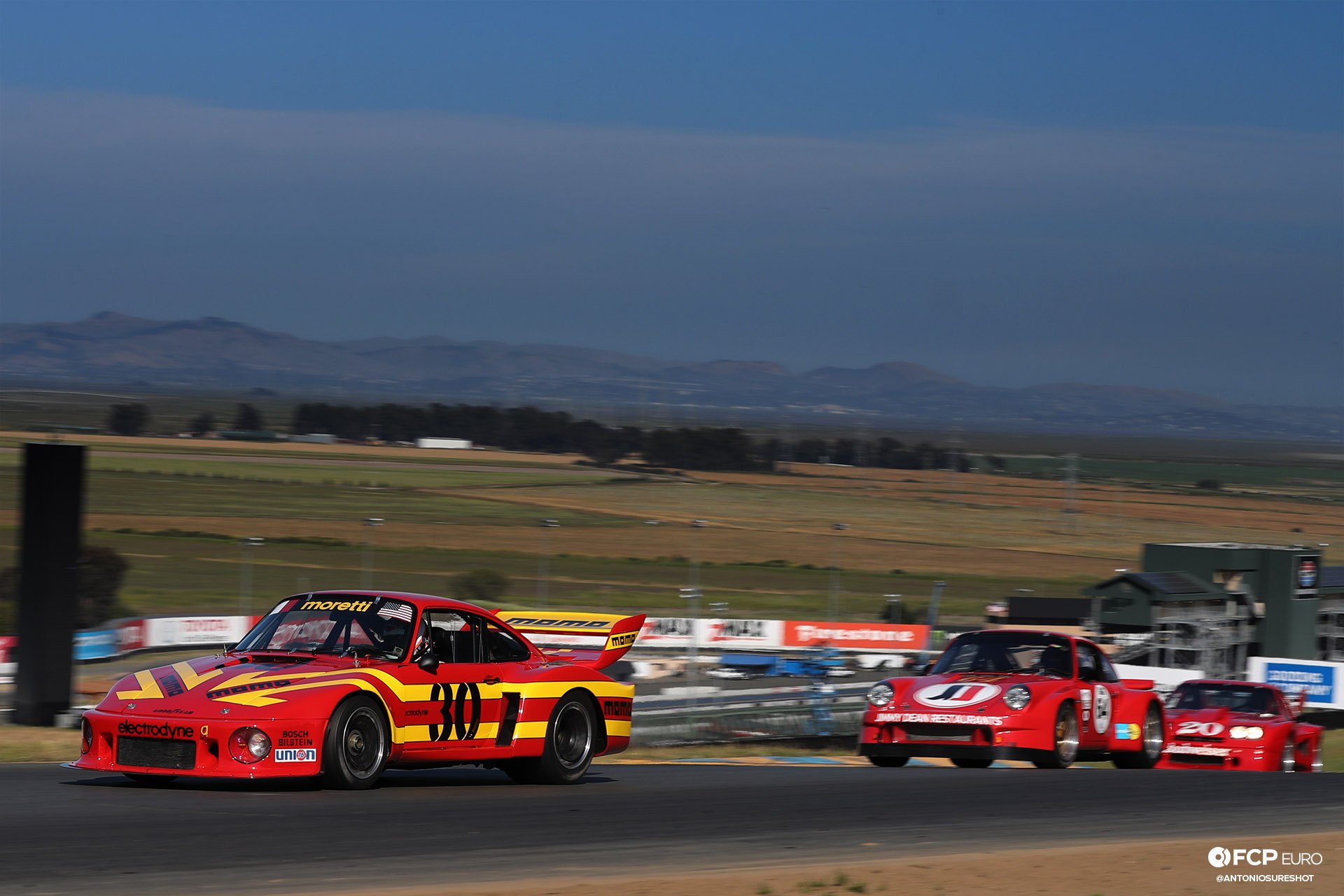 What he didn’t anticipate was the tremendous increase in horsepower that the twin-turbocharged 935 produced by comparison to the RSR. Alan commented, “This car is both amazing and scary. While you can never have too much horsepower, we dialed down the boost for my first trip to the track. This 935 is a handful, but it’s such a fun car to drive!” 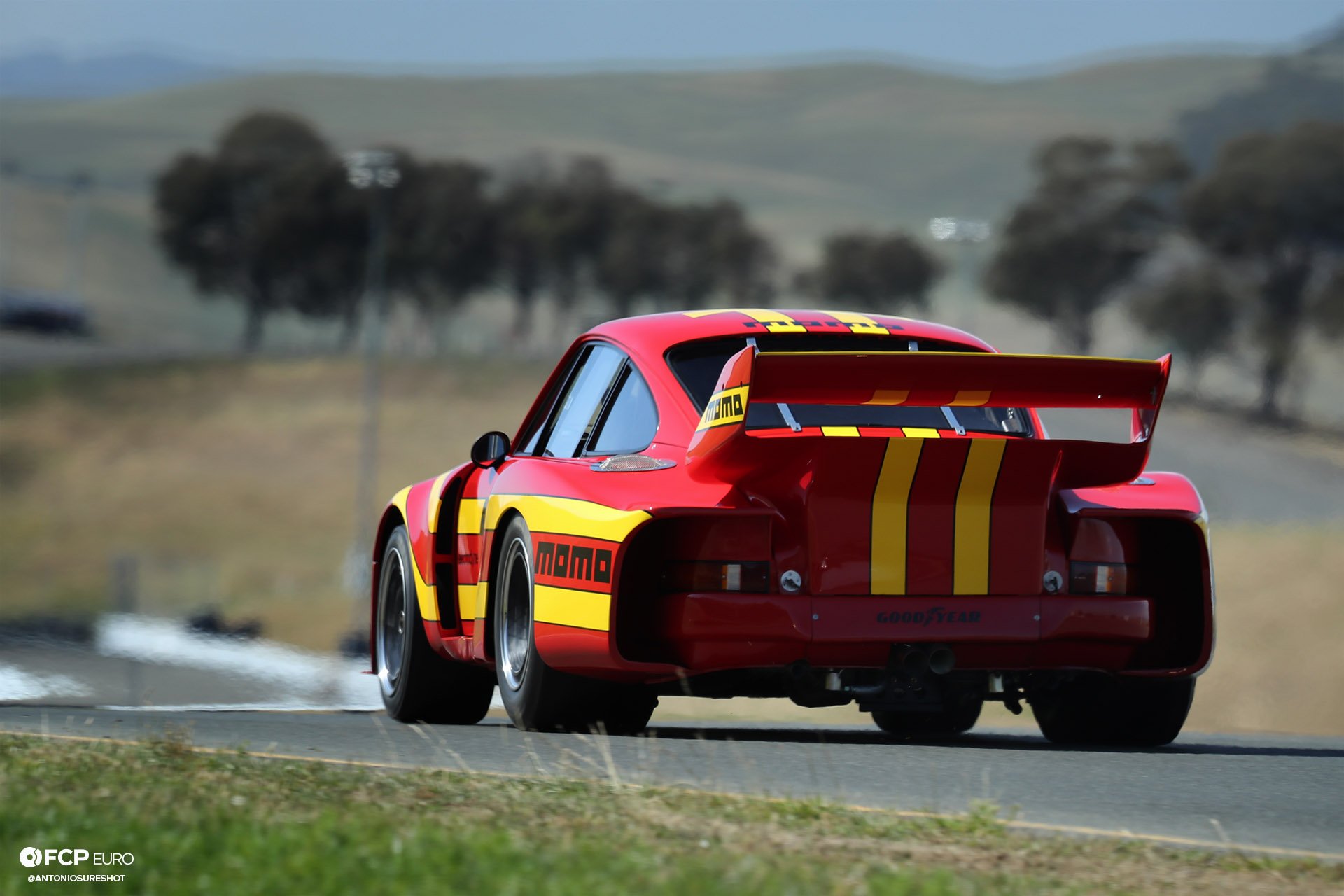 Restored and back on its wheels, Moretti’s legacy lives on with every event that chassis 930 990 0032 makes an appearance. Alan’s respect and enthusiasm for this Porsche gives great assurance that it won’t be mothballed into a collection anytime soon.

If you enjoyed Alan's 935, you can find additional Porsche-related content at porsche.fcpeuro.com, as well as more build features like this one, here. If there's anything specific you would like to see, or if you have any questions/comments, leave them in the comments section below.

Antonio Alvendia is an aficionado of cameras, rare wheels, 90s hip hop, and obscure aftermarket car accessories. He bought his first E39 Touring after seeing M5 Estates on photo trips to several racetracks and automotive museums in Europe. He is currently devising a plan to return to the Nurburgring to shoot the N24 race and drive the Nordschleife again. ••• Instagram : @MOTORMAVENS 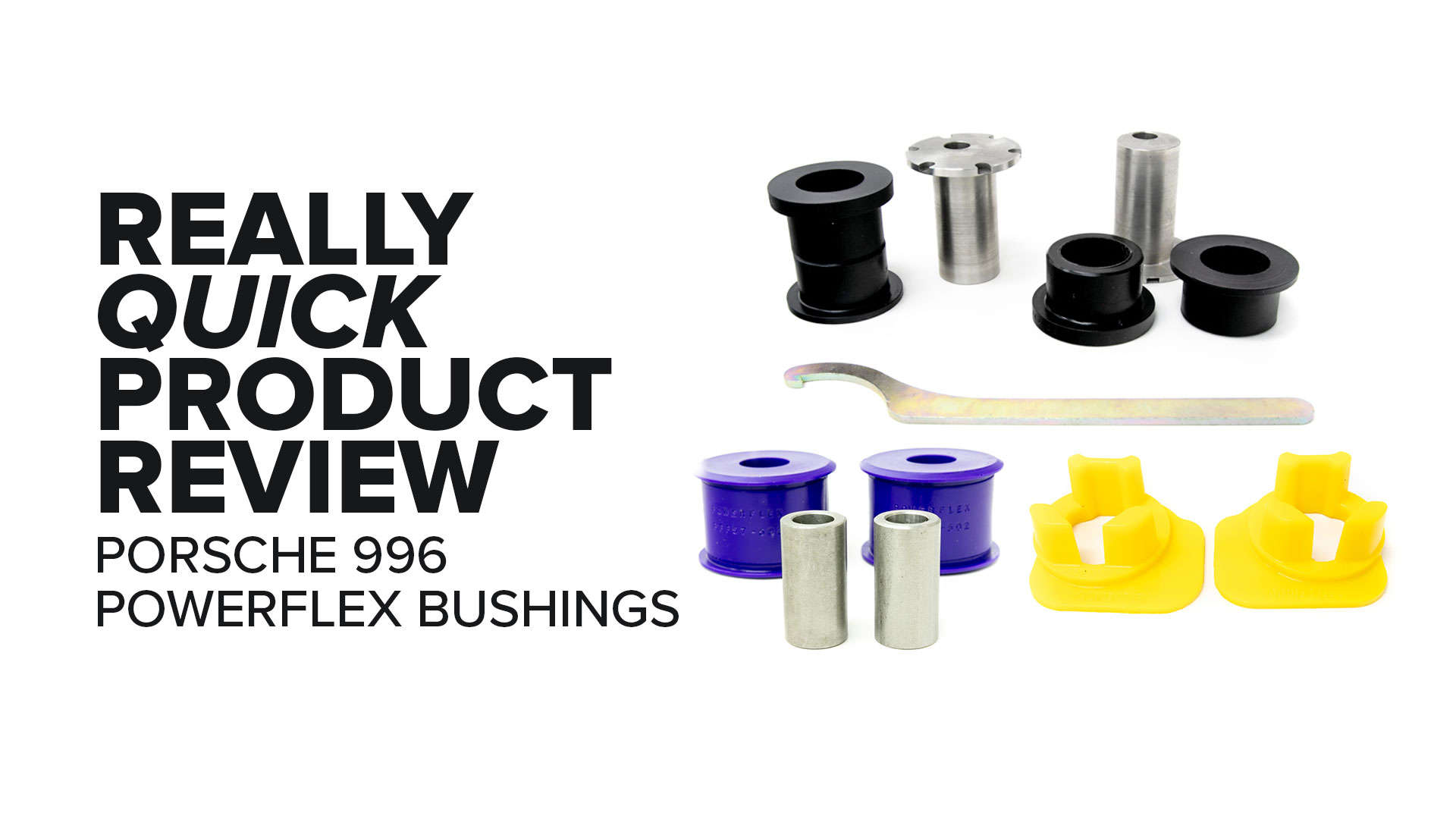 If you own a Porsche 996 911 and the suspension hasn't already been refreshed, it's probably long overdue. Over time, the rubber of your bushings degrades and quite literally falls apart. Depending ... 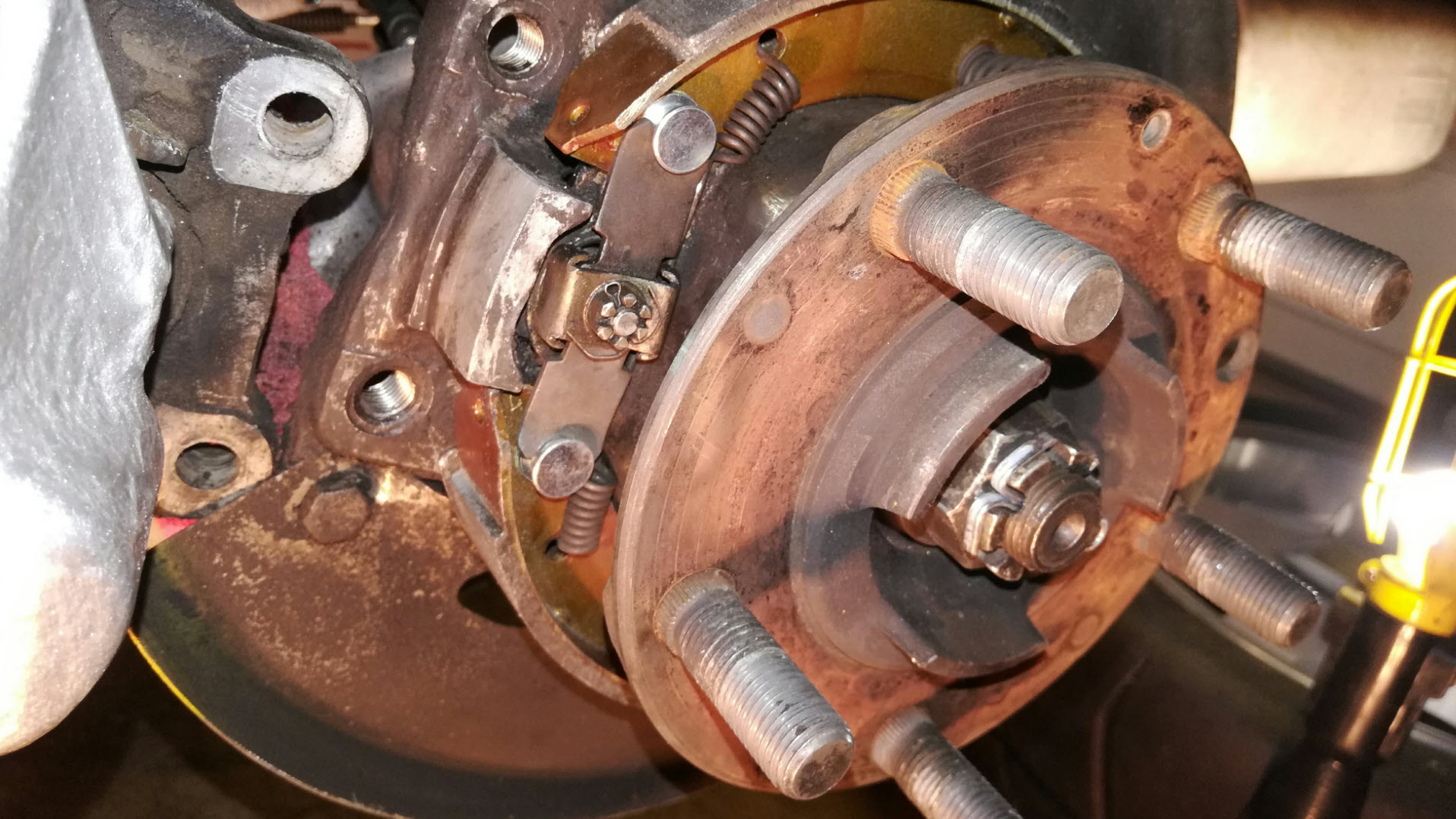 There's a good chance that if you pull the parking brake lever on your old Porsche 911, it will still try to roll away. Your air-cooled Porsche 911 has very small drum parking brakes on the rear hubs ... 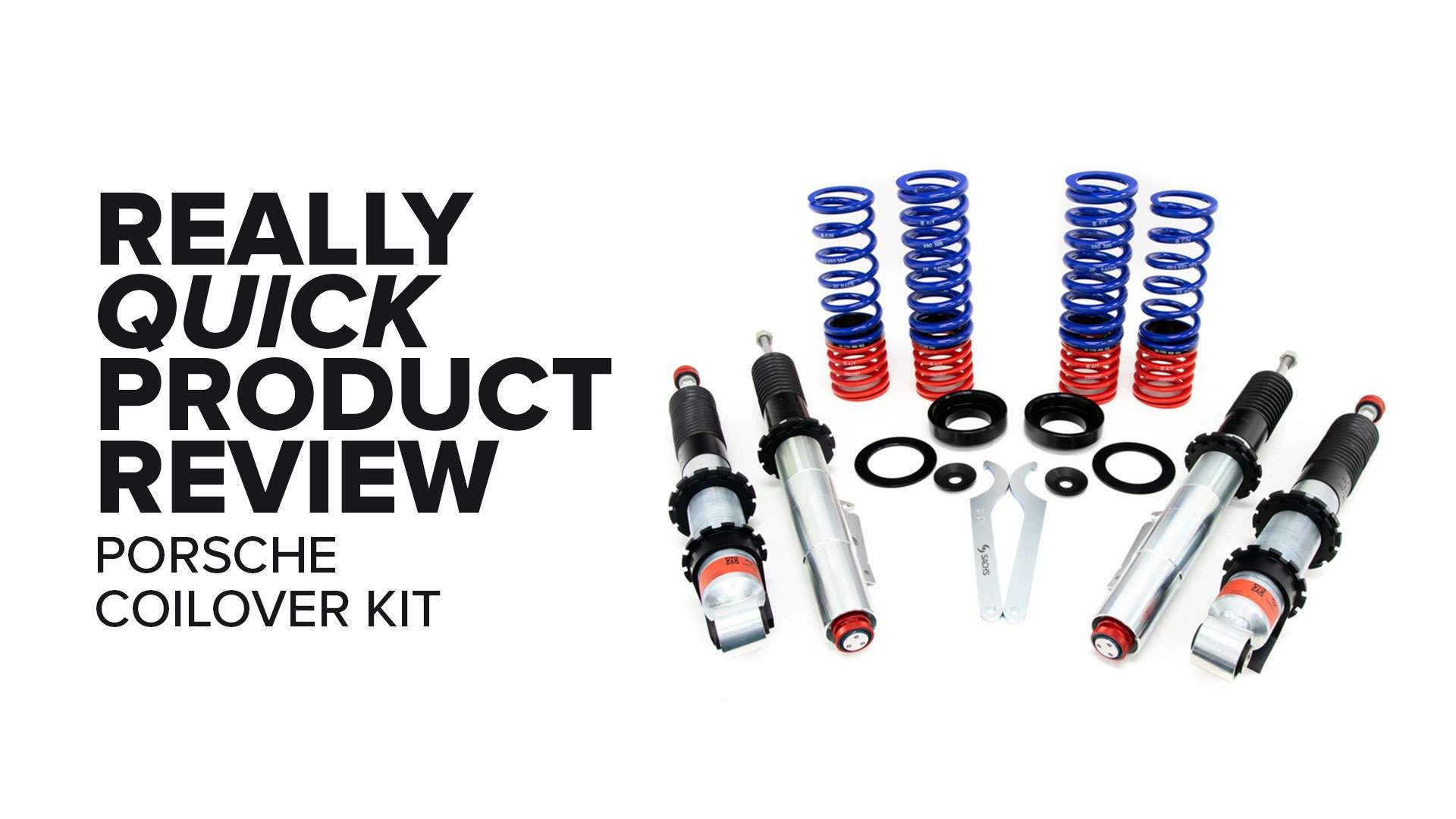 Are the shocks and springs worn-out and ready for replacement on your Porsche 996, or maybe you just want to close up that stock wheel gap? Rather than reinstall stock suspension, or drop it on ...

The Porsche 996 is well known for timing system issues. Over time, old plastic degrades and cast aluminum parts fatigue, which creates multiple points of potential failure. Ignoring the signs of ... 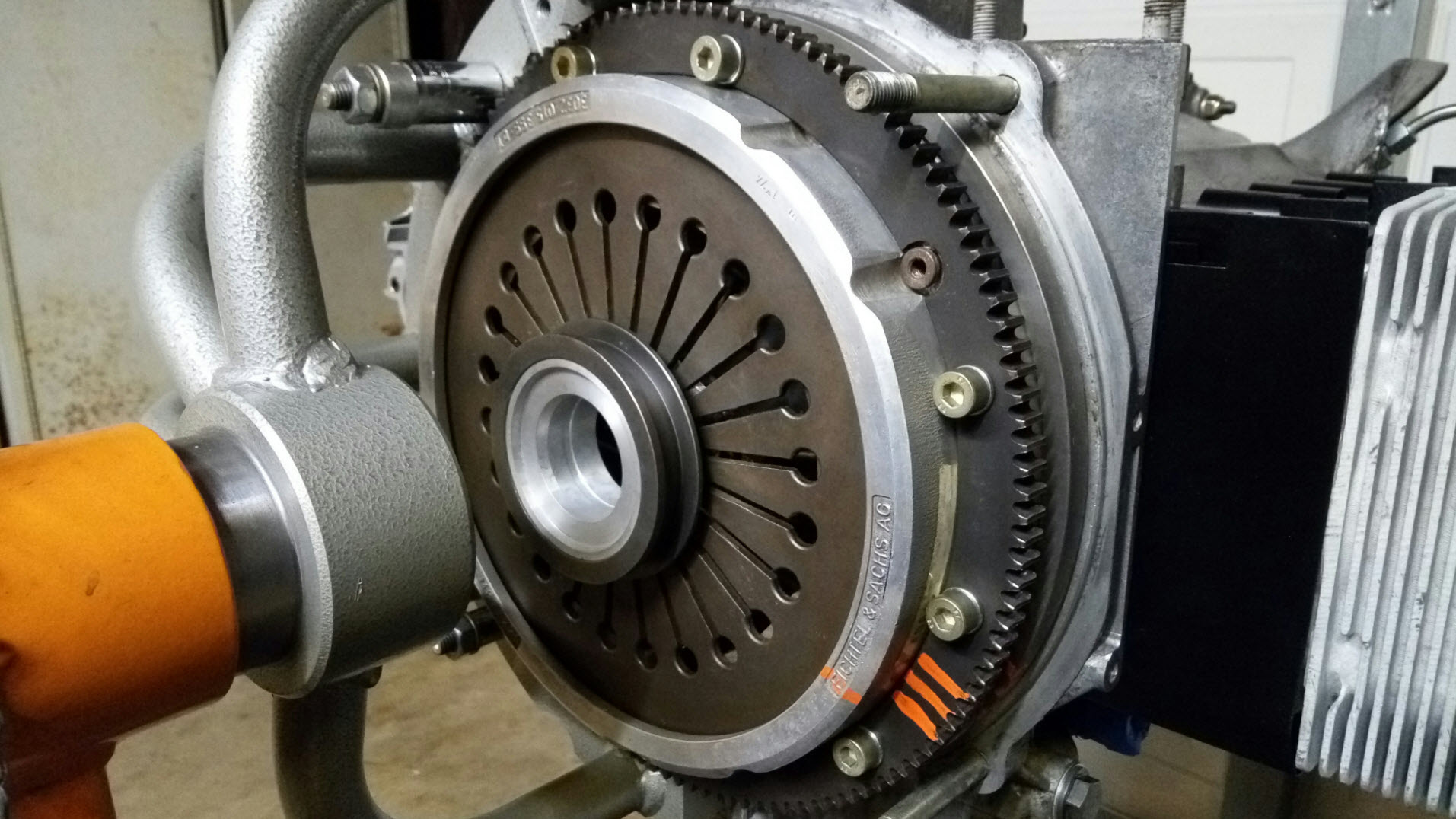 If you are having trouble getting into any gear on your manual transmission Porsche 911, it's probably time to replace the clutch assembly.... 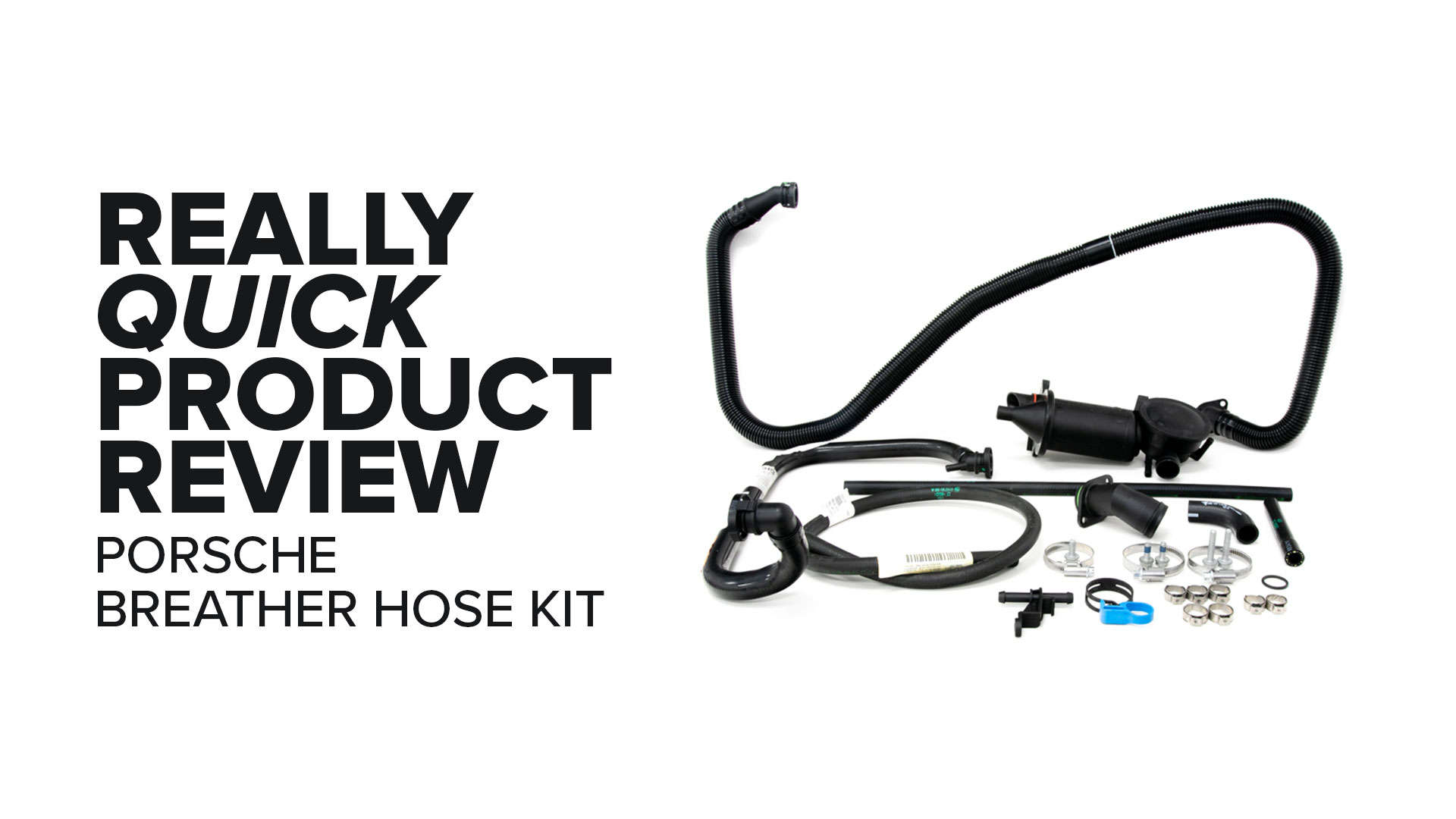 The crankcase breather system is critical to the function of the Porsche 996. If this system, also known as the air-oil separator system is failing and left unattended, can end up costing a lot more ...