What are the symptoms of a bad valve cover gasket on the BMW N51/N52N?

You can ignore the symptoms of a failing valve cover gasket for a while. However, if you let it go too long, it can result in costly damage. Some of the major symptoms are:

How long does it take to replace the valve cover gasket on the BMW N51/N52N?

I must stress that this is not a basic or straight forward job; it will require basic automotive skills and some finesse. Depending on the vehicle you're working on, you may have more or less stuff to move out of the way before you can access the valve cover. In this DIY, we worked on a BMW E92 3-series with an N51 engine. I was able to complete the job in about 5 hours doing it my first time, however it may take you more time or less time based on your experience.

How much does it cost to replace the valve cover gasket on the BMW N51/N52N?

If you go to a dealer or independent shop to have your valve cover replaced on your BMW N51 or N52N engine, you can expect it to cost you between $600 and $1000 in parts and labor. By purchasing the parts through us and doing the job yourself, you can easily save over $500 and it should only take a half day of your time.

This step is going to vary based on what car you own. For an E8X 1-series or E9X 3-series, you will start off by removing the cabin filter housing, AUC sensor (if equipped), strut brace (if equipped), engine acoustic cover, etc. Basically, this first step is to open the engine bay up and get the other equipment out of the way. On the N51/N52N engines in the E8X 1-series and E9X 3-series, you will find that there's a lot of stuff that must be removed before you can get to the valve cover.

This is what the engine bay will look like when everything is out of the way: 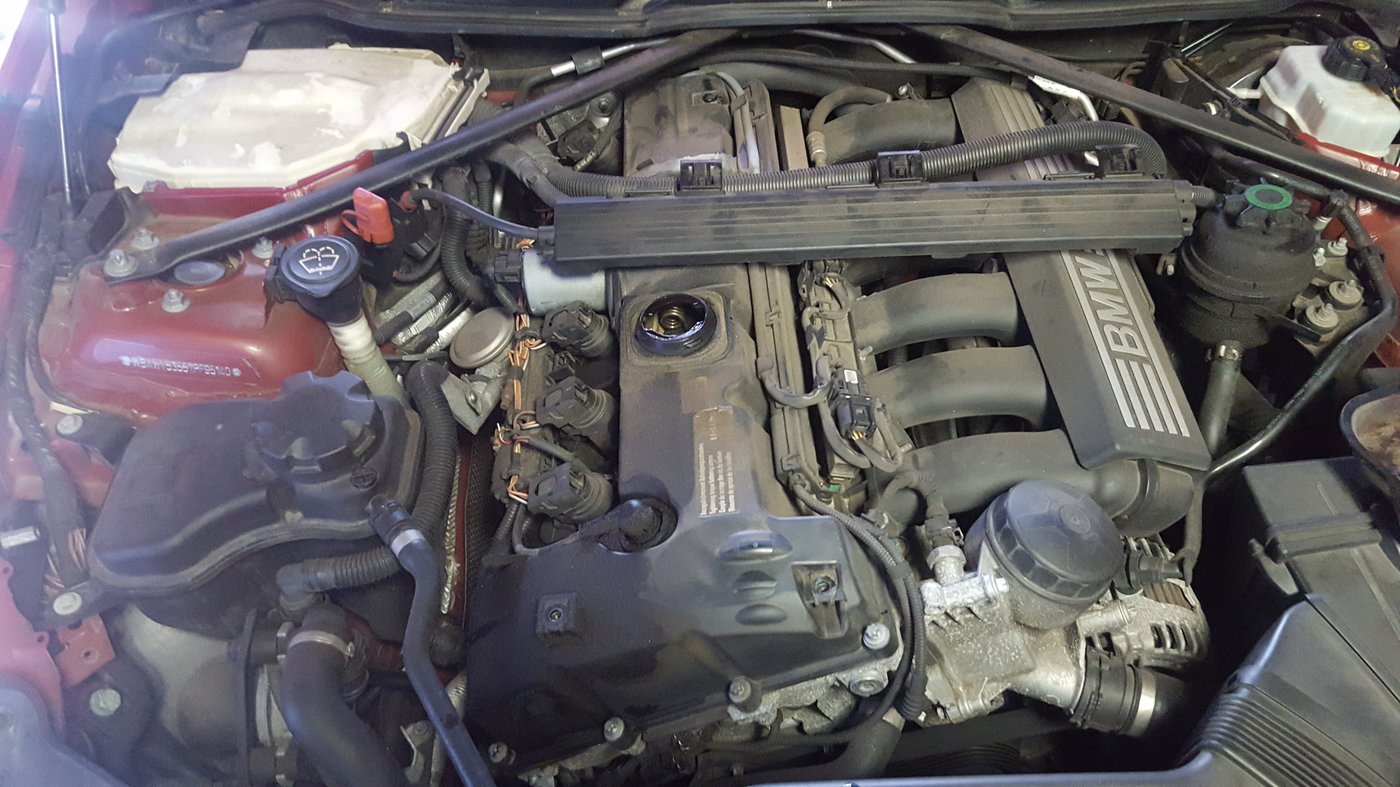 At this point, it's a good idea to disconnect the battery ground cable in the trunk to make sure you don't inadvertently short anything out as you will be moving harnesses and disconnecting a lot of electrical components in this job. All you need is a 10mm box wrench or socket on a ratchet. Once the bolt is loose, pull the terminal connector off the lead on the battery and put off to the side: 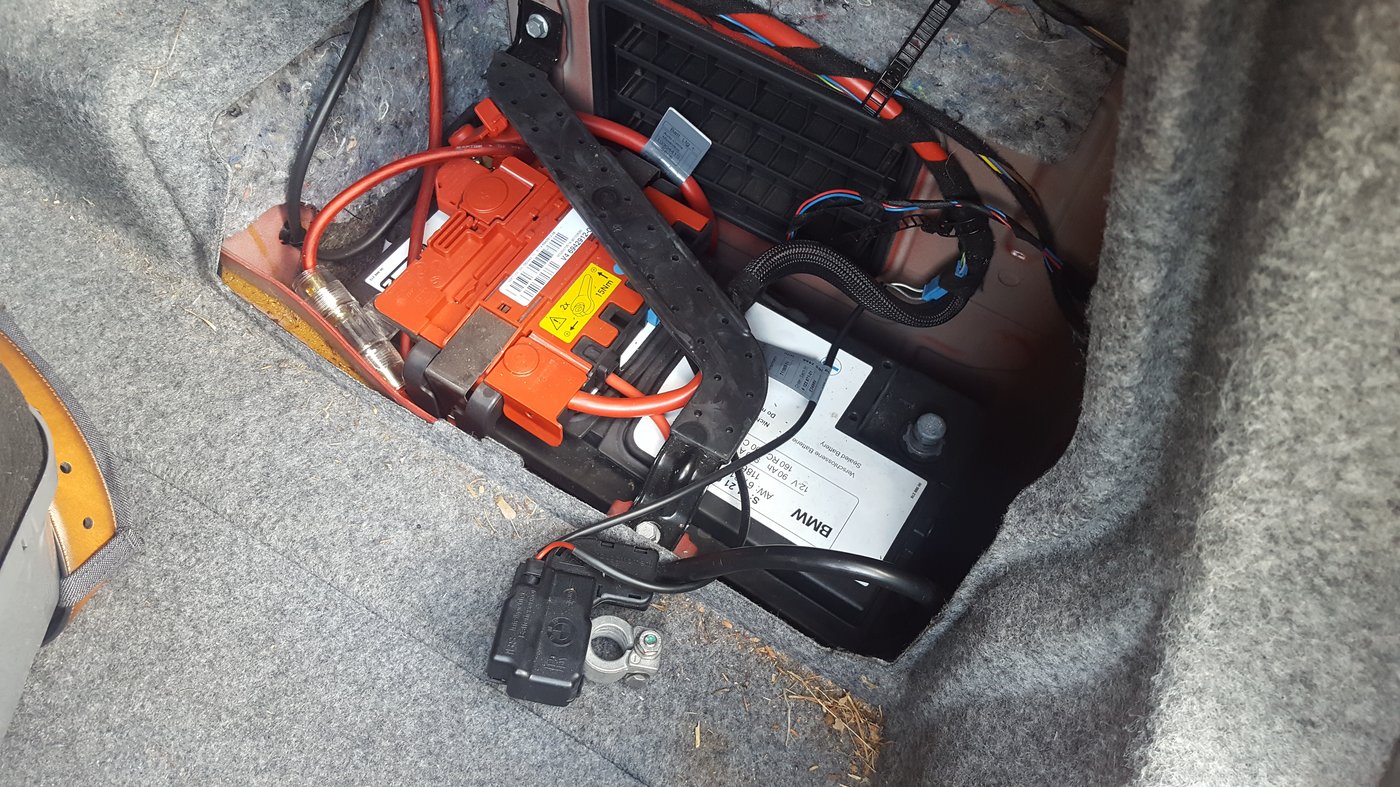 Step 3: Move everything out of the way

At this point, it's time to start disconnecting all of the electrical connections. On the intake side of the engine, you will need to disconnect the fuel injector harness, oil pressure sensor, oxygen sensor connectors, and anything else in the way. The fuel injector harness is one plastic housing with individual connectors that plug into the injectors. Using a small pick tool, pull the small metal clips up and back. Make sure you do not lose the clips as finding replacements in next to impossible. 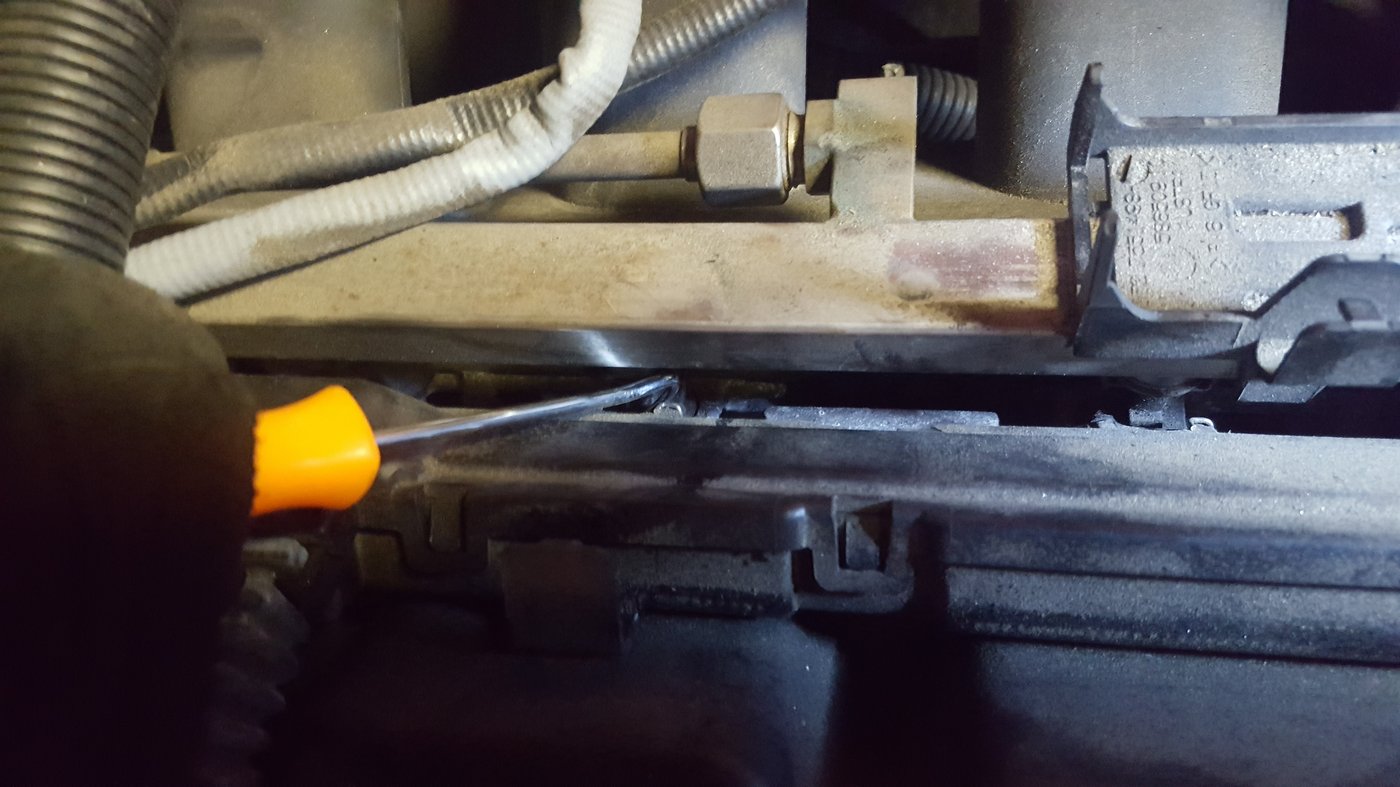 Once all the clips are pulled back, pull the injector harness up and out of the way. When doing this, make sure that there is not too much tension on other parts of the harness. If there is, trace the wires to the source of the tension and disconnect if possible. You will also need to remove the e-box cover on the passenger side of the engine bay. The locks on this cover slide into the unlock position, allowing you to lift the cover out of the way. You will have to slide the harnesses that sit in the box out of the way later on as well. 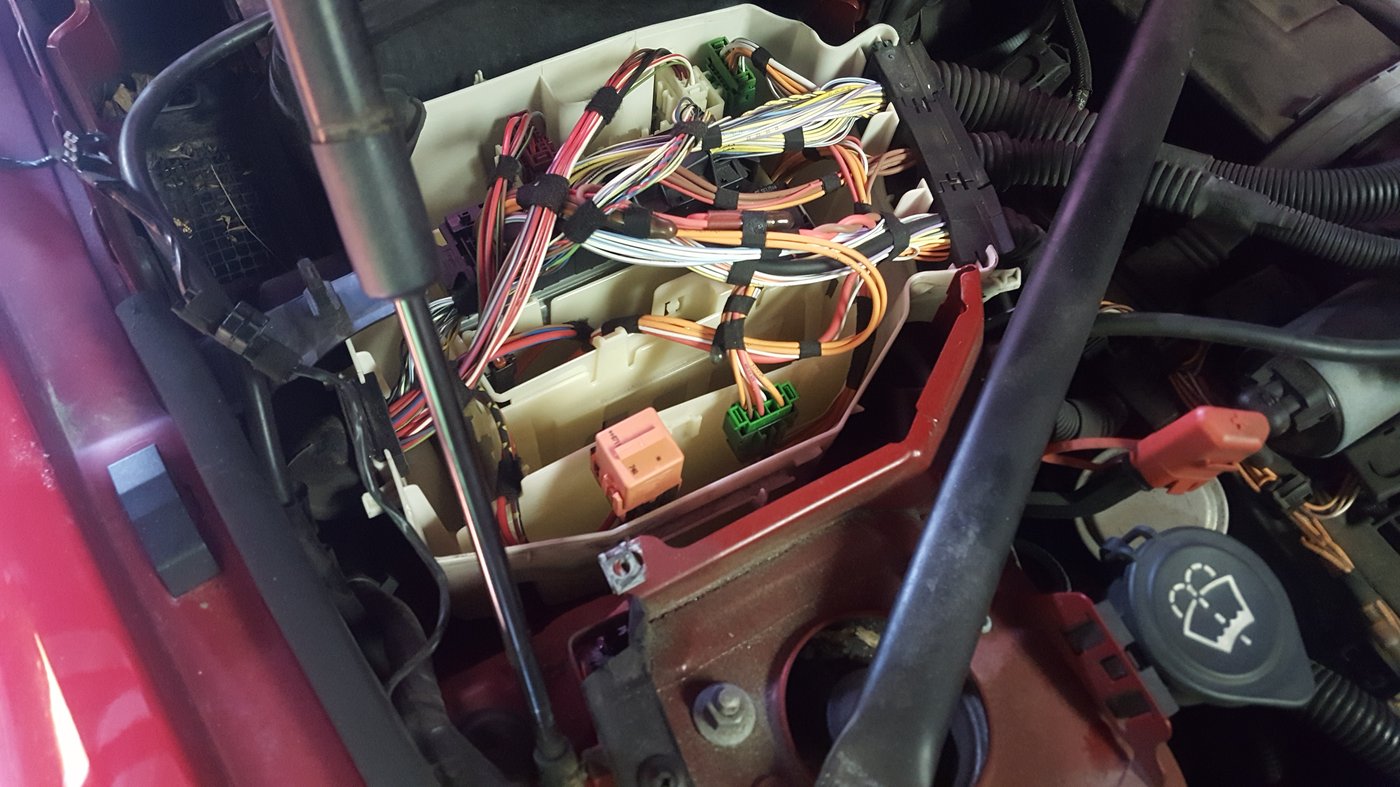 There is a breather hose on the back of the valve cover. Be careful when removing this as it can be fragile with age. Simply press the tabs inward with your fingers and push the hose off the nipple on the valve cover. If it's not moving, do not pry on it with any tools. Take your time and make sure you don't break the hose.

On the N51 and N52N engines, there are metal spark plug sleeves which help seal off the spark plug tubes. These sleeves are one time use only and must be removed to have enough room to remove the valve cover. Using a pair of snap ring pliers, squeeze the gap in the sleeves together and pull them out. This is what they look like when installed: 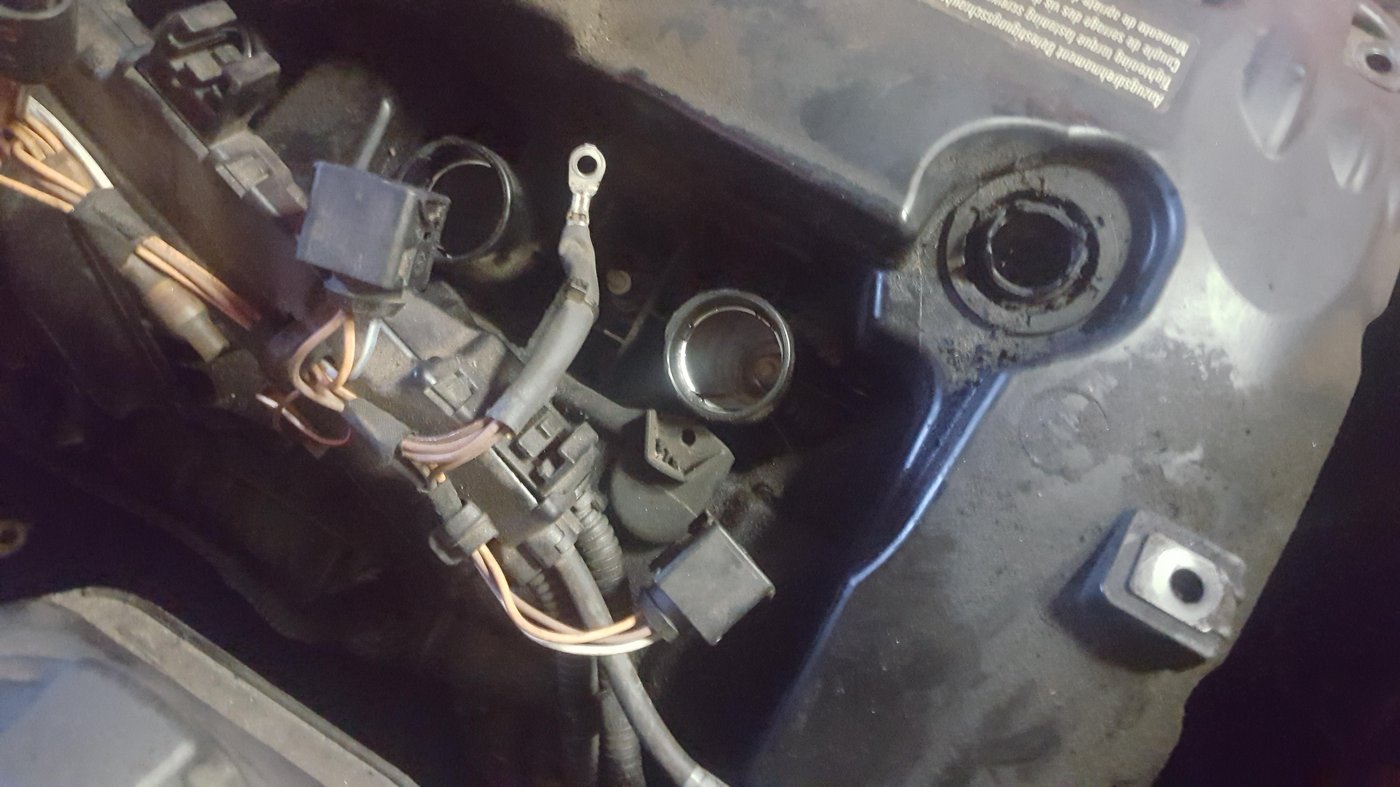 With everything disconnected and the harness moved out of the way, this is what your engine bay will look like: 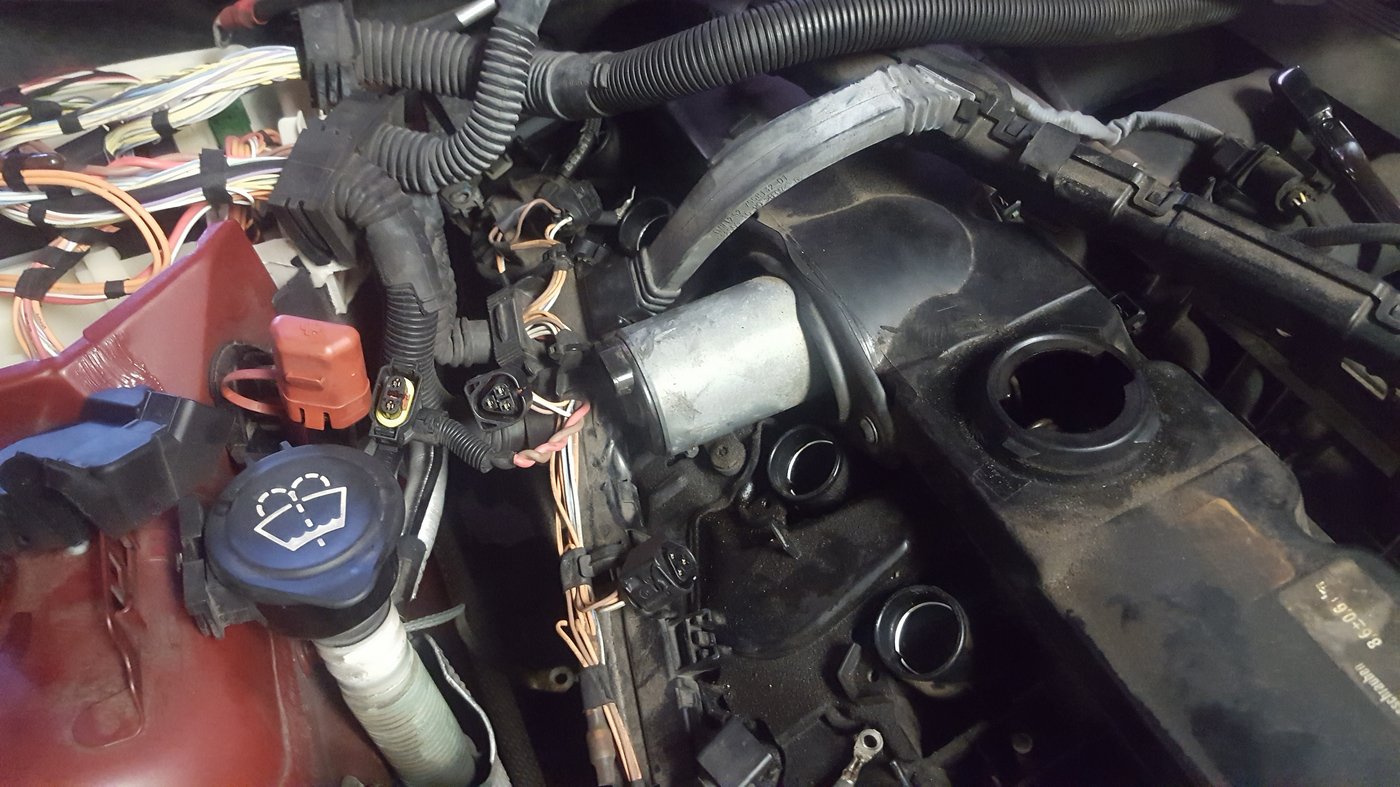 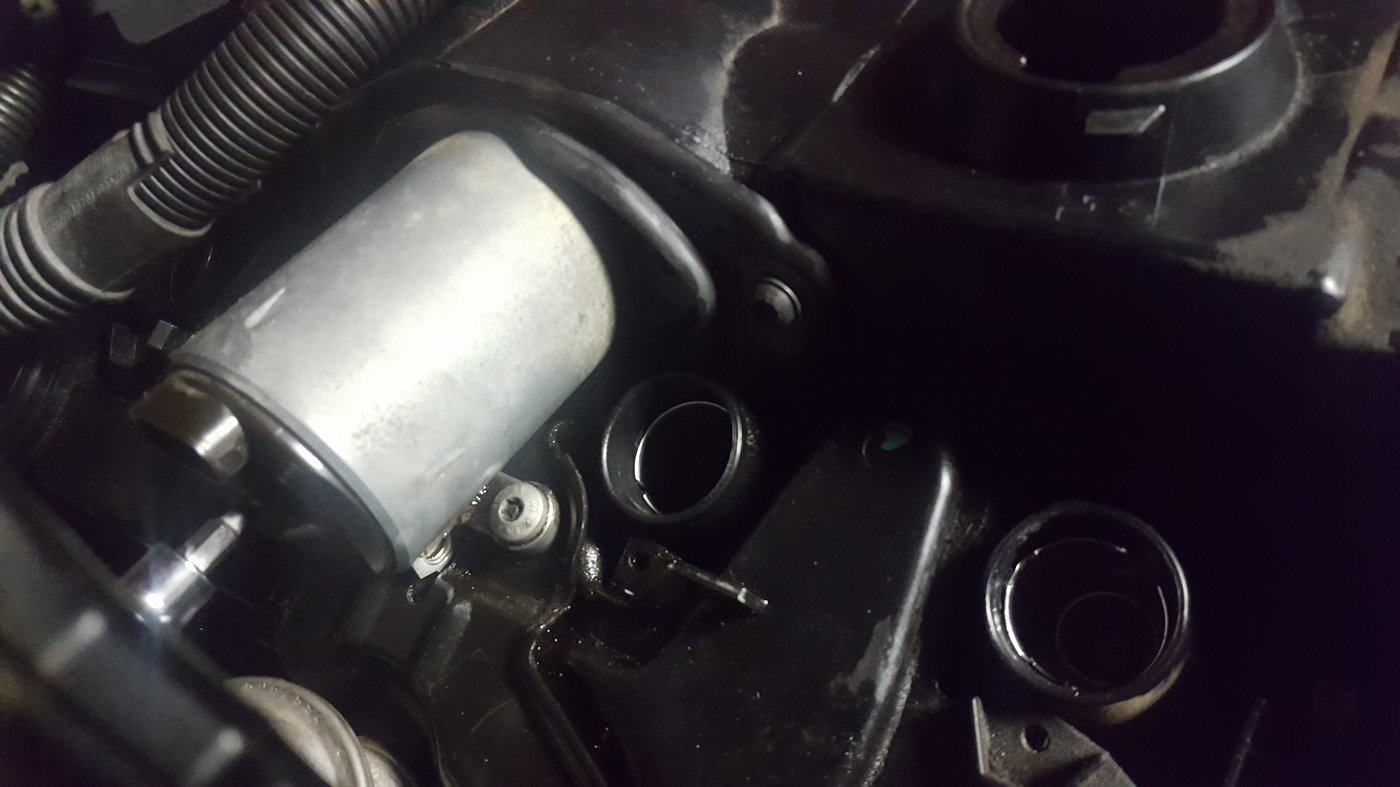 The valve cover is held on with a series of torx screws that sit around the perimeter of the valve cover. The torx screws in the back are going to be brutal to gain access to; this is where your universal joints and extensions come into play.

Pro-Tip: Do not drop your E8 torx socket when working on the back of the engine. Finding it will take a lot of time and will involve removing the under tray. Ask me how I know.

There are three studs in the center of the valve cover that can be removed with regular hex sockets. Make sure you have deep sockets for this as one of the studs is pretty deep. Two of the studs are grounding points for the ignition coil harness. These three inner bolts also thread into the cylinder head and help seal the valve cover around the spark plug tubes.

Note: On some vehicles the coolant expansion tank hose may be in the way. Simply disconnect the hose and put it off to the side.

The e-box and the windshield cowl interfere slightly but with enough finesse, you can get the valve cover out without damaging it or breaking anything else. Below is what you are left with when the valve cover is off the engine.

If you've ever wondered how the valvetronic system works, the motor has a corkscrew that turns which in turn changes the position of the eccentric shaft. This will either increase or decrease the lift of the intake valves. This is how it mounts: Here is a good video showing how the Valvetronic system works:

Have a break and pat yourself on the back. You have reached the halfway point in the job. If you're replacing the entire valve cover, you don't need to worry about these steps. If you are reusing the original valve cover, you will need to remove the old gasket as well as the three individual spark plug tube seals. This step is relatively straight forward.

First, clean the valve cover as best as you can. Brake parts cleaner works well for this. You will want to clean the mating surfaces on the cylinder head with lint free shop rags. Make sure no left over gasket material or oil is on the surface as it can prevent the gasket from sealing properly.

The replacement valve cover gasket has a tab on it with the short seven digit BMW part number. If you're having trouble orienting the new gasket, this tab is located on the intake side of the valve cover towards the front like this: 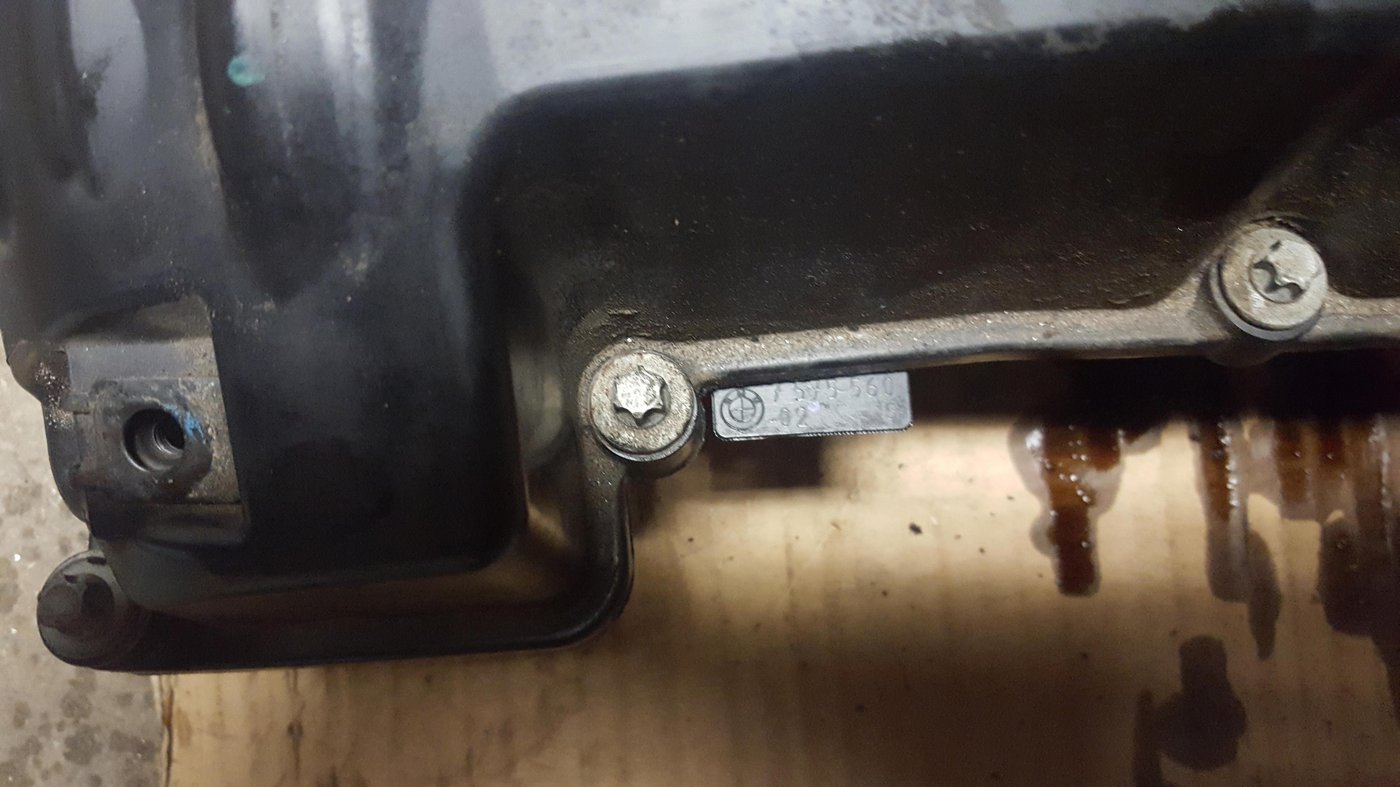 Push in the new spark plug tube seals. They only fit one way, so don't worry about mixing them up: 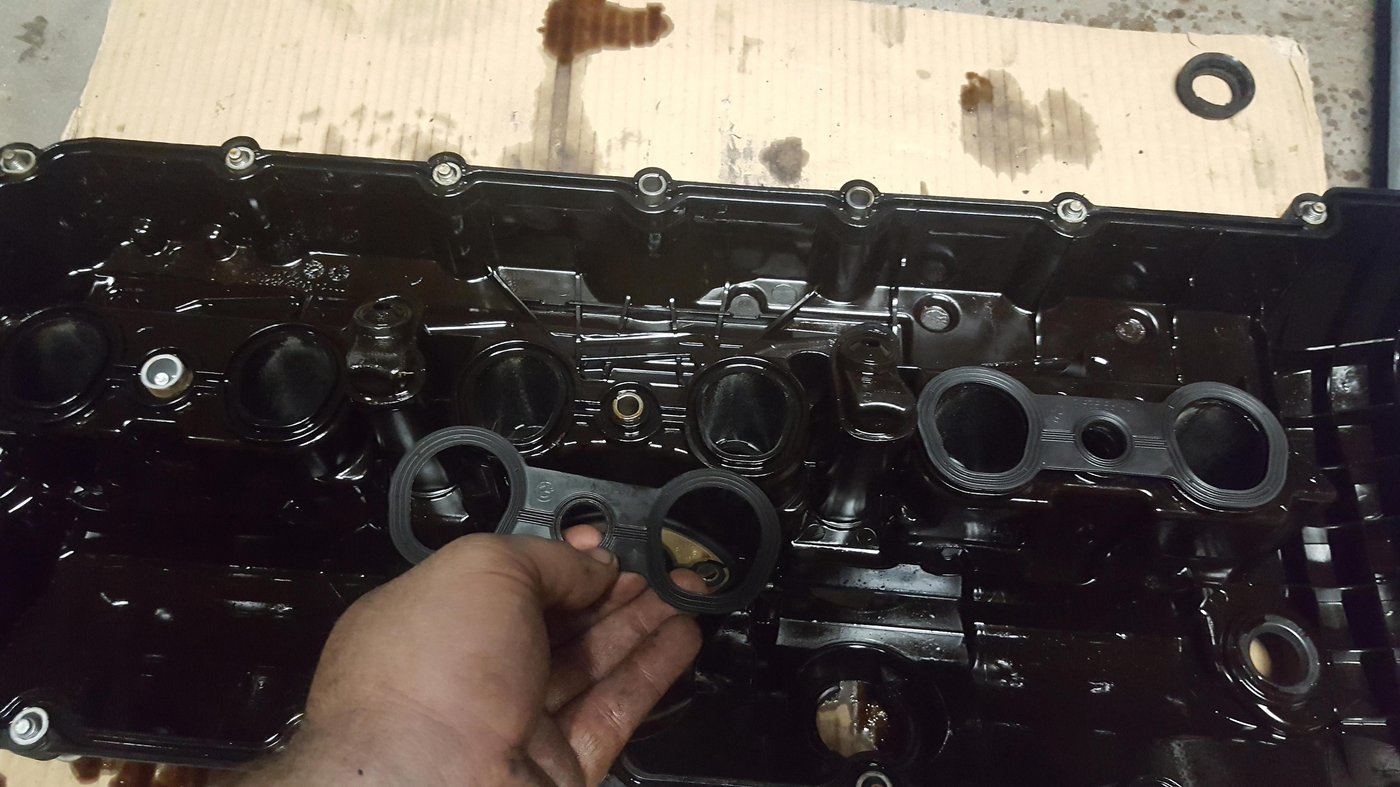 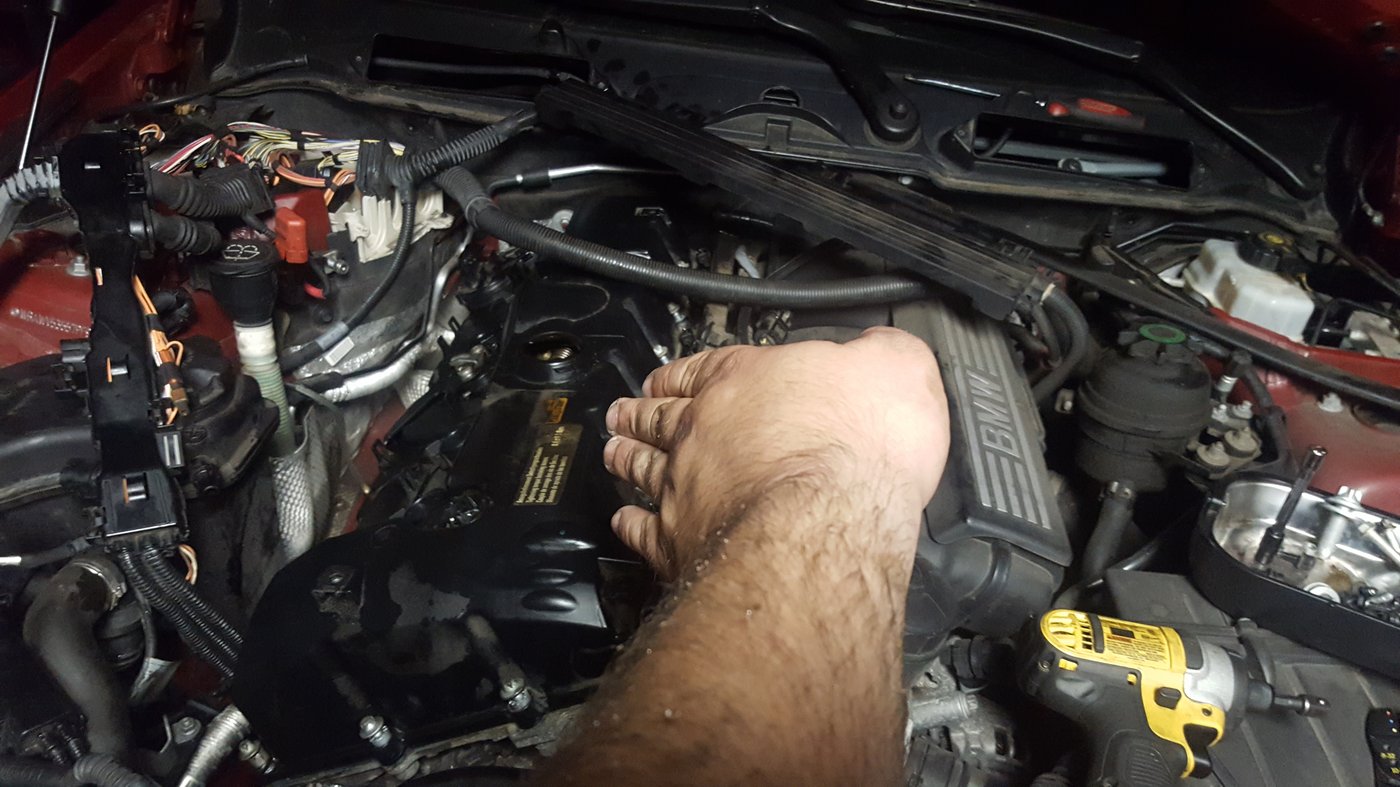 Step 9: Put it all back together

At this point, you're basically done with all the hard stuff. Make sure you reconnect all electrical connectors, reinstall the ignition coils, ground straps, secondary air injection parts (if applicable). You should be left with an engine bay that looks like this: 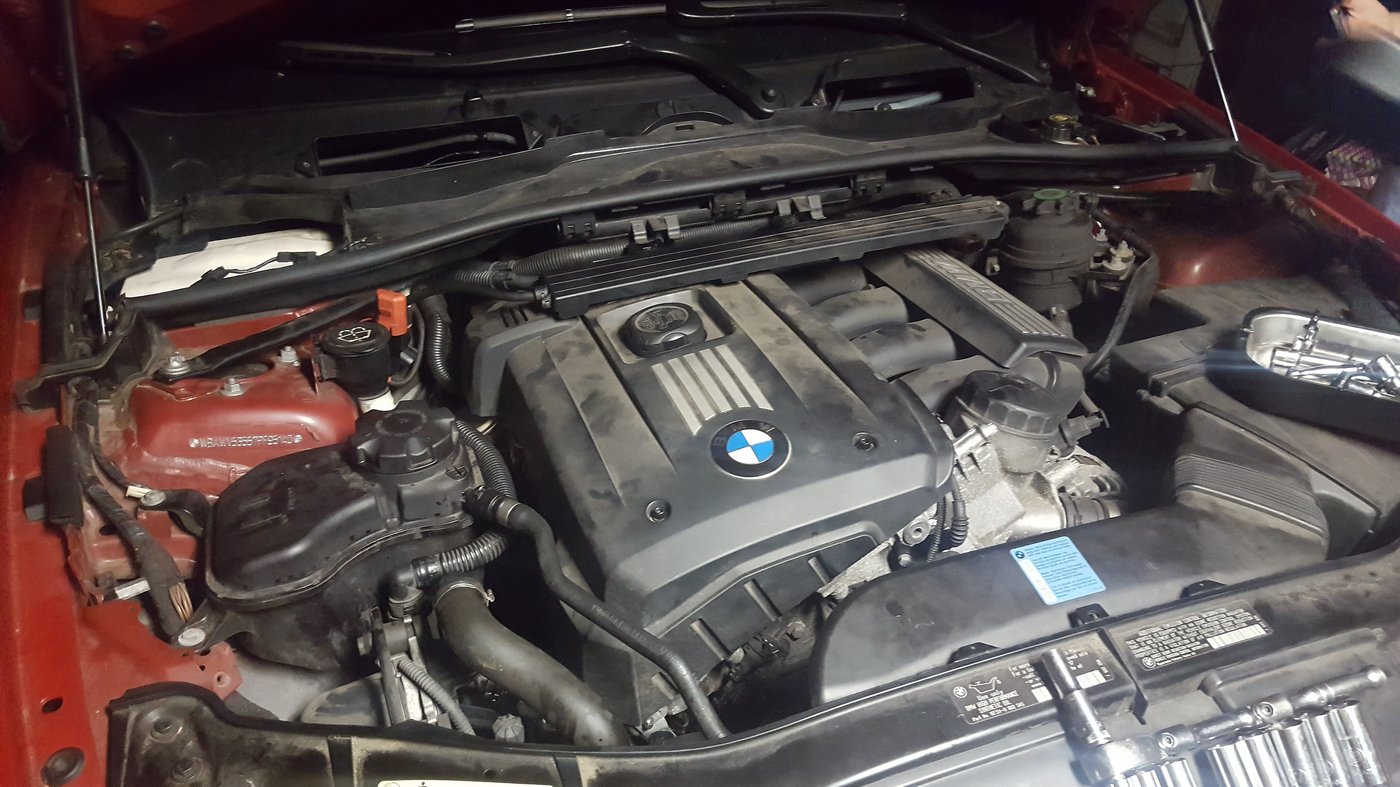 Now, reconnect the battery. If you have ISTA or INPA, now is a great time to reset the stop limits for the Valvetronic system. If you do not have ISTA or INPA, you can do this manually by turning the car on in accessory mode (position 2 no start) a few times. It will take a couple of days for the Valvetronic system to completely reset without a hard reset electronically, so you may notice some roughness when the engine idles. 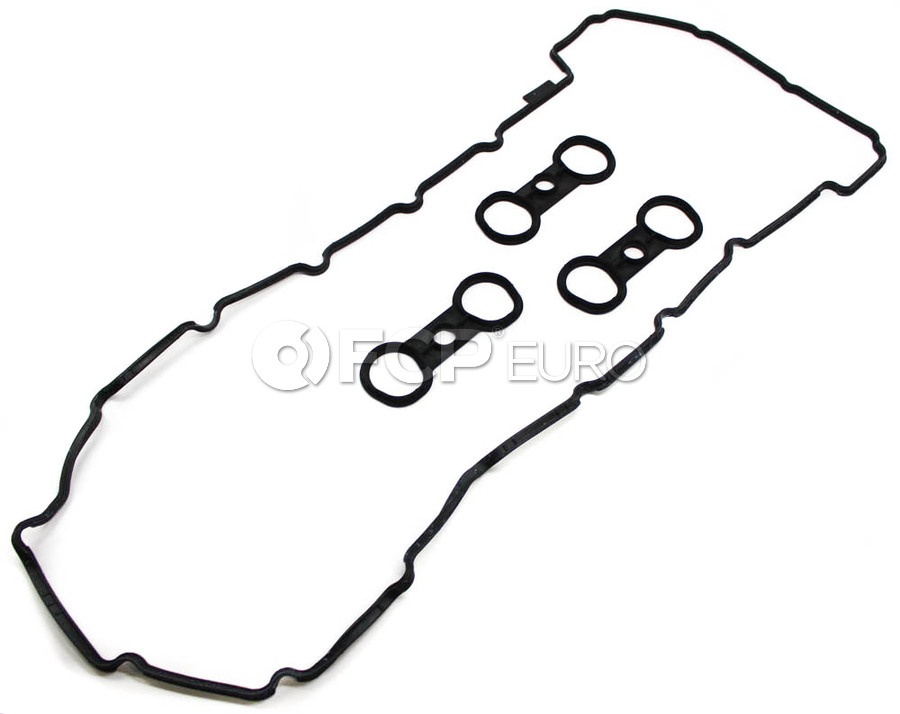 And that's all there is to it! If this guide was helpful, let us know in the comments. If we missed anything, also let us know!