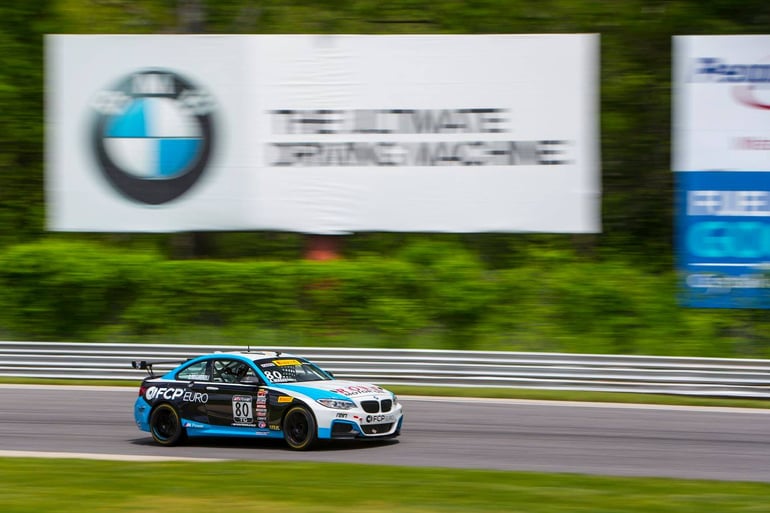 Coming off of 2 solid finishes at Mosport, we were feeling good about our Rounds 5 & 6 this past weekend at Lime Rock Park. However, I had never been there before, so we took the opportunity to attend the test day on the Tuesday before the Friday/Saturday race events. As I tried to figure out the critical ins and outs of this small 1.5 mile track, we were also working on setting up the car to be optimized for the almost-exclusive right-hand turns. By the end of the day, though, we felt like we were further behind than where we had started.
There were lots of big names joining in for this race at Lime Rock. Will Turner and Dane Cameron would be campaigning 2 BMW M235iR's (a factory race car of the BMW M235i), Randy Pobst would be driving a BMW, and local driver and reigning TCA Champion Elivan Goulart would be driving a Lotus Exige. The Lotus and the Audi S3 TCRs were viewed as the cars to have for this track that favors handling over power. We were targeting to finish in the top 10 for the weekend, out of this 32 car TC class field.

On Friday, we had a practice session that led directly into qualifying, so nothing more than a tire change would be possible between sessions. With Gary in attendance now, we were reworking the setup on the car to get it to work for us. The first practice already looked a little rough, with me coming in 12th. In qualifying, though, everyone dropped the hammer harder than us and we found ourselves starting in a disappointing 15th, right in the middle of the pack.

We made a couple other adjustments for the race and went into survival mode. I'd be starting alongside Will Turner and a couple spots behind Pobst. I got a decent start and found a gap up the middle of the straight that I tucked into, following the 370Z of Tony Rivera into Turn 1, passing Wittmer in the process. I pulled past Turner coming out of the Left Hander and focused forward. After the first restart after a full course caution, I made a pass on Pobst on the outside of Big Bend. A few laps later, I got past Ricca on the inside of Big Bend, while Liefooge fell back with an issue. Having moved up to 8th place, I was settled in and defending against a charging Nick Wittmer.

When a full course yellow bunched up the field again, I found myself behind Rivera. On the restart, Wittmer got aggressive, setting up for a pass on the inside of the downhill. This actually slowed us both up, allowing Rivera to pull a few car lengths gap. From there, I was in full defense mode against Wittmer. I was finding out where he was able to find a slight bit of time on me, though, and work on these areas through the race. Remember, this was still my first time at Lime Rock! Wittmer couldn't get enough of a run anywhere to execute a pass, and I was holding him off.

In the last laps, though, the next 4 cars ahead started battling each other, allowing us to catch them. On the last lap, I went to the outside of Big Bend (turn 1), trying to make a move around Rivera. It didn't work and I fell back in line, but entered the Left Hander a little tight and with a touch more speed than I wanted. It compromised my exit onto the Right Hander just enough that Wittmer was able to get his nose beside my rear bumper before I could cross back in front of him before the kink on the No Name Straight. That was it. He had the inside line into the Uphill. I tried to carry the speed on the outside, but he was pulling ahead at the top of the hill. Going into West Bend, I made an attempt to carry speed on the outside, but I had to lift on exit as Wittmer pulled ahead. I glanced in my mirrors and found Pobst making a move to my inside! Where the heck had he come from?! We went down the Downhill side by side. I carried as much speed as I dared on the outside, flinging up tire clag that was built up out there. As Pobst went rather conservative on the inside, it was enough to keep my nose ahead of his and come across the finish in 9th place. Quite a rewarding improvement over my starting position! As a team, we were thrilled with this result and looked forward to starting in 9th for the second race.

On Saturday, our title sponsor, FCP Euro, was hosting an employee gathering at the race. They are based in Connecticut, so this was a great opportunity for the team members to meet and engage with our Rooster Hall Racing team, watch some great racing, build comraderie, and promote their brand! Some 30 employee came out - about half the entire company - and most brought additional family members. The hillsides along the track were packed with a huge turnout of fans, and the FCP Euro compound was well-placed, overlooking the Left Hander. I felt a lot of pressure to provide a good show for them!

On the standing start for the second race, I easily pulled ahead of the Audi of Coupal. Filippi got by me coming through the Right Hander and I then had Grahovec on my tail. The Miata of Weisberg had a slight touch with Filippi that put him off, allowing me by. I got a better run than him onto the front straight, got to the inside of him through Big Bend, and pulled ahead going into the Left Hander. There next car in my sights was the Miata of Gallagher. I chased him for several laps before finally getting a run on him coming out of the Right Hander and passing going into the Uphill. He battled back, though, sticking his nose in where he saw an opening, bumping me through the sections where he was quicker. He got his nose inside of me in between Turns 1 and 2 of Big Bend and made contact with my RR tire when I turned in for Turn 2, putting me sideways. At this point, Eric called in the contact to Race Control. On our next time down the front straight, though, Gallagher sailed off the track with brake lockup, having apparently broken something when we touched.

Only seconds later, the Lotus of Goulart went off ahead of me on the entry to the Left Hander, after apparent contact with the Audi of Holton. He had a hard hit, which totaled the car, and brought out the full course caution. I was now up to 5th.

Between the last restart and the checkered flag, I settled into 5th place, opening up a gap to Filippi behind me, but also losing enough ground to the 4 cars ahead that I couldn't challenge for further improvement to my position.

To have come up to 5th, from an initial qualifying position of 15th, was a hugely gratifying result for us! This was significantly better than our target of simply breaking into the top 10 and the points scored have placed me 4th in the driver's championship at this mid-point of my rookie season. We have a break from now until we race in Rounds 7 & 8 at Utah Motorsports Campus on August 11-13.

After the autograph session, I had the pleasure of joining the FCP Euro owners, employees, and their families at their compound overlooking the Left Hander. Eric had brought the car up on the lawn in that area so that it could be viewed up close and personal. We must have cycled 100 kids through the driver's seat and half that many adults over the next couple hours! It was great to get to meet all the folks from FCP and see so much enthusiasm from everyone; not only for the racing, but for their jobs and the company that they work for. It is a great honor to be associated with such a progressive and passionate company such as FCP Euro.

Check out the full album on the FCP Euro Facebook page.