When you already have a vintage W108 Mercedes-Benz, how do you top it? By finding the RHD version and turning it into the ultimate classic of luxury European cars.

Jimmy Uria is no stranger to the classic W108 Mercedes-Benz. “I purchased this car about seven years ago,” he told us, “but I’ve had another W108 for about ten years now and have been a fan of them for longer.” His goal from the start, even with his first, was to create a vintage European VIP car. “My original plan for this car is what you see here, I just wanted to do this when I got that first one ten years ago.” 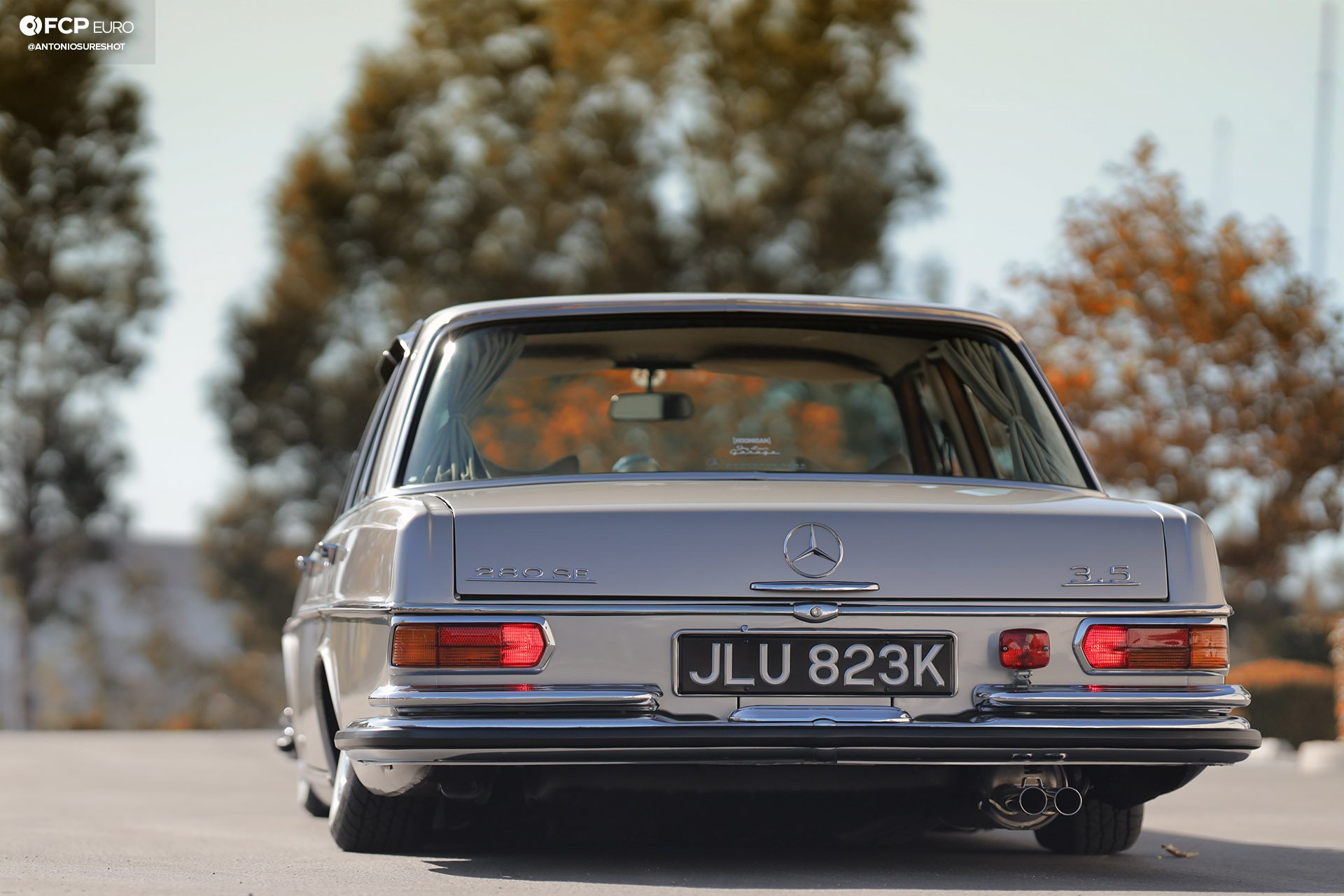 The most amazing part about this car is how original it is. We’re not just talking in terms of style and execution but in how much is still OEM Mercedes. The typical VIP-influenced build isn’t something that is restored to factory spec, but is customized with bright, pearl or metallic flake paint jobs or blacked out with all of the shiny parts gone. 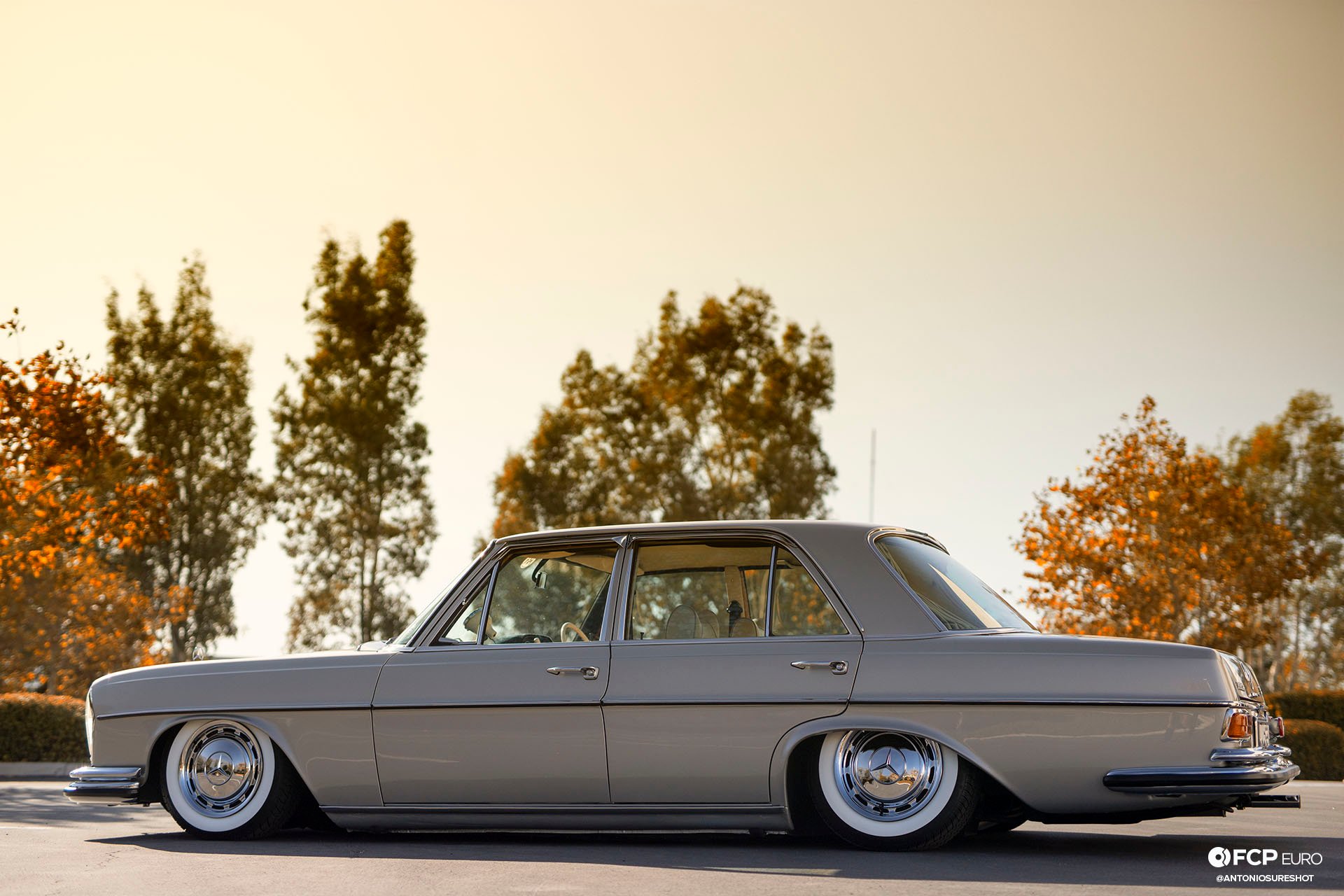 Instead, Jimmy’s 280SE has been carefully restored. Yes, it does ride on a custom air suspension system and drops far lower than it ever did in 1972. Even so, the body looks like it’s straight off the showroom. Though, you’d be hard-pressed to find another W108 with the 3.5-liter V8 in Silver-Grey paint. 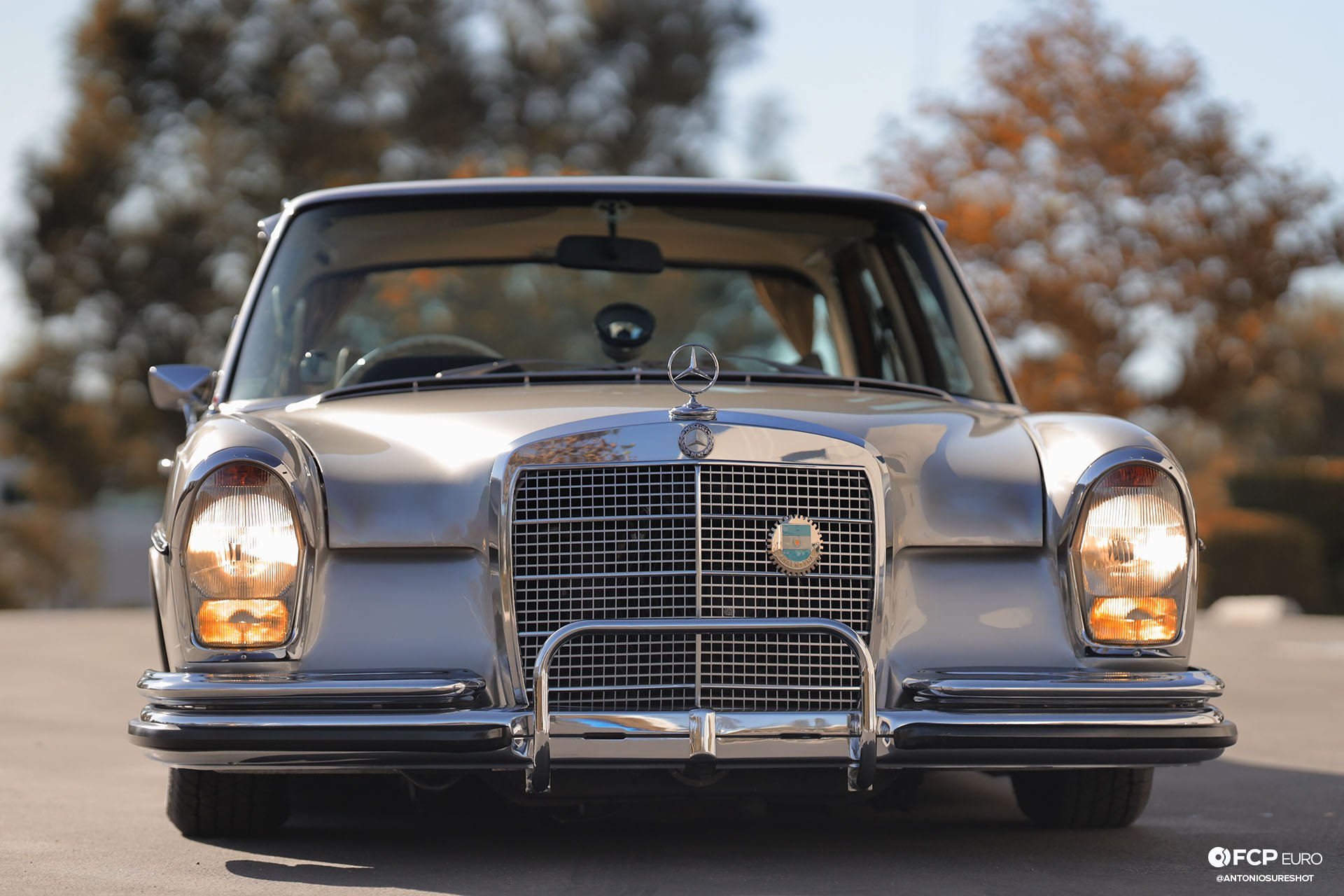 This is because the entire car was stripped down to its bare chassis and resprayed in that rare color combo and added XPEL Ultimate paint protection on top. Afterward, all the chrome was replated and polished back to its beautiful luster. It’s amazing that it just needed a respray when you consider that it was originally owned in Jamaica before being imported and registered here in California. On top of that, Jimmy also decided to remove the US-legal parts like the side marker lights, headlights, taillights, and bumpers. So, there is a bit of extra bodywork, but again it was done cleanly and you can’t tell it went through two conversions. 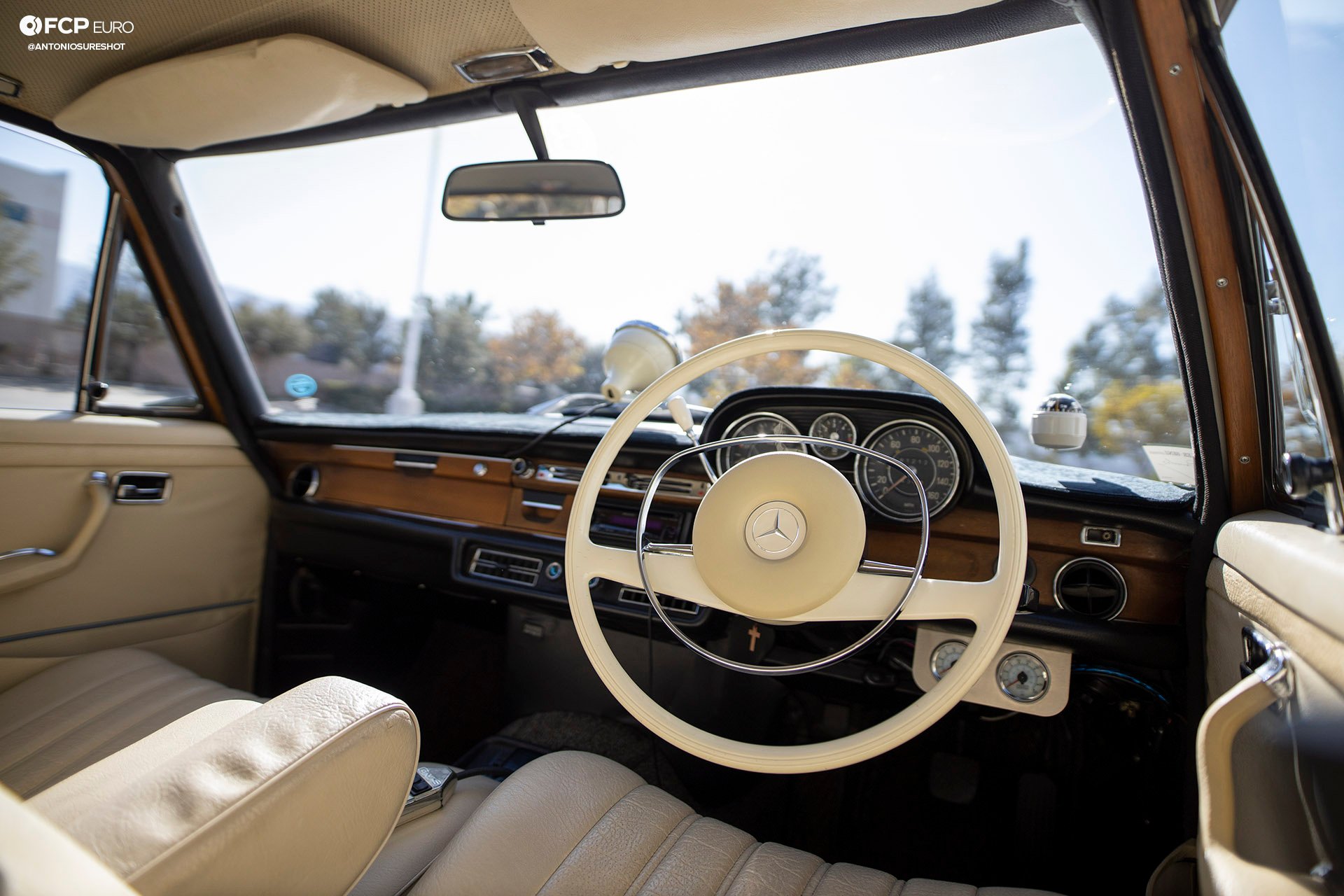 Inside you won’t find a crazy sound system or aftermarket seats. The head unit is upgraded but nothing else stands out from the original wood, parchment leather, and chrome pieces. Much like the exterior color, the parchment interior is just as rare for the Mercedes-Benz W108. 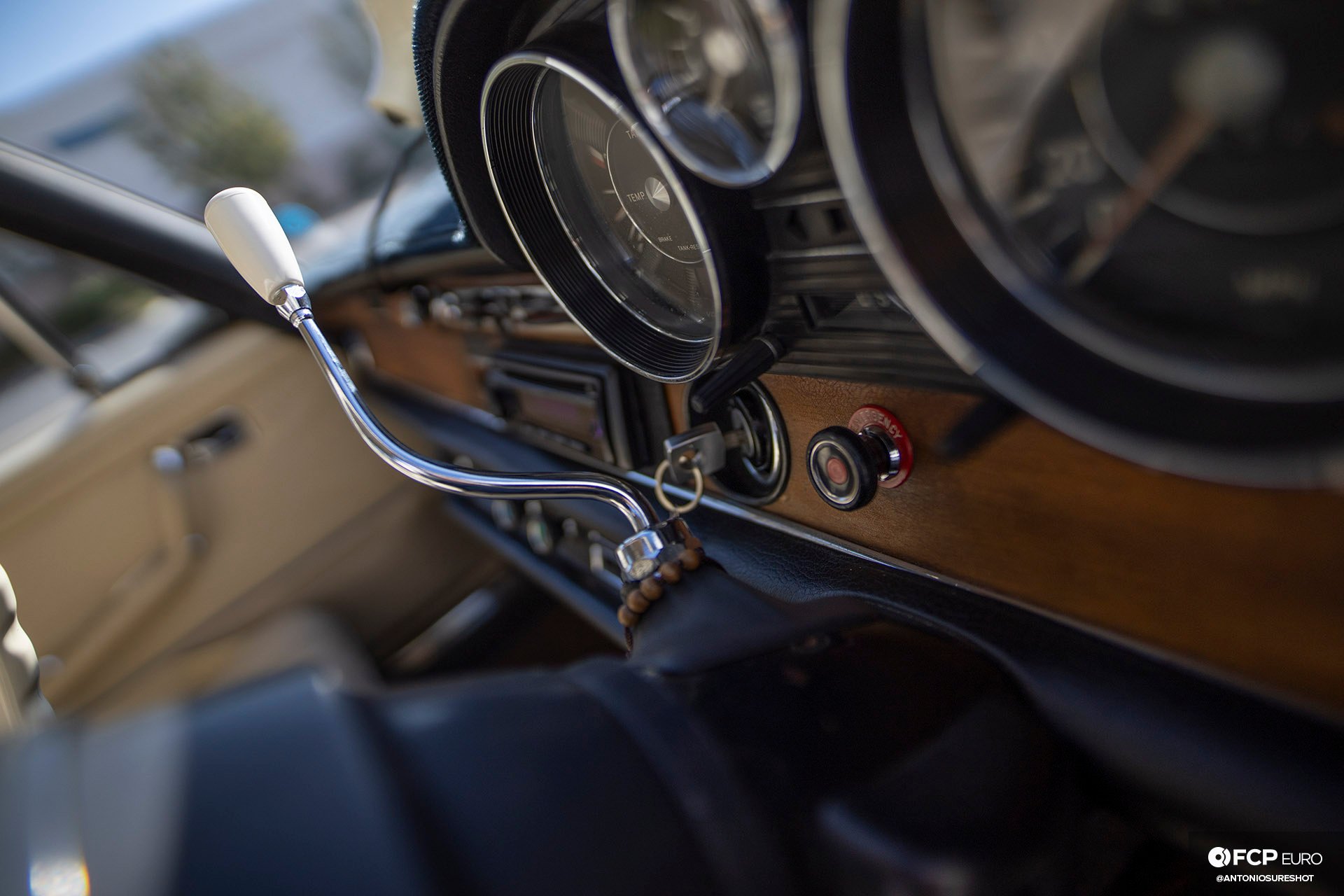 The gauges are certainly a timepiece of its era and reveal what changes when you have a car with a column shifter that is right-hand drive. “Park” is all the way right instead of left. Oh, and the shift knob is also OE ivory. The speedometer’s yellow marks give a visual indication of the typical speed limits of 35, 55, and 75-MPH. 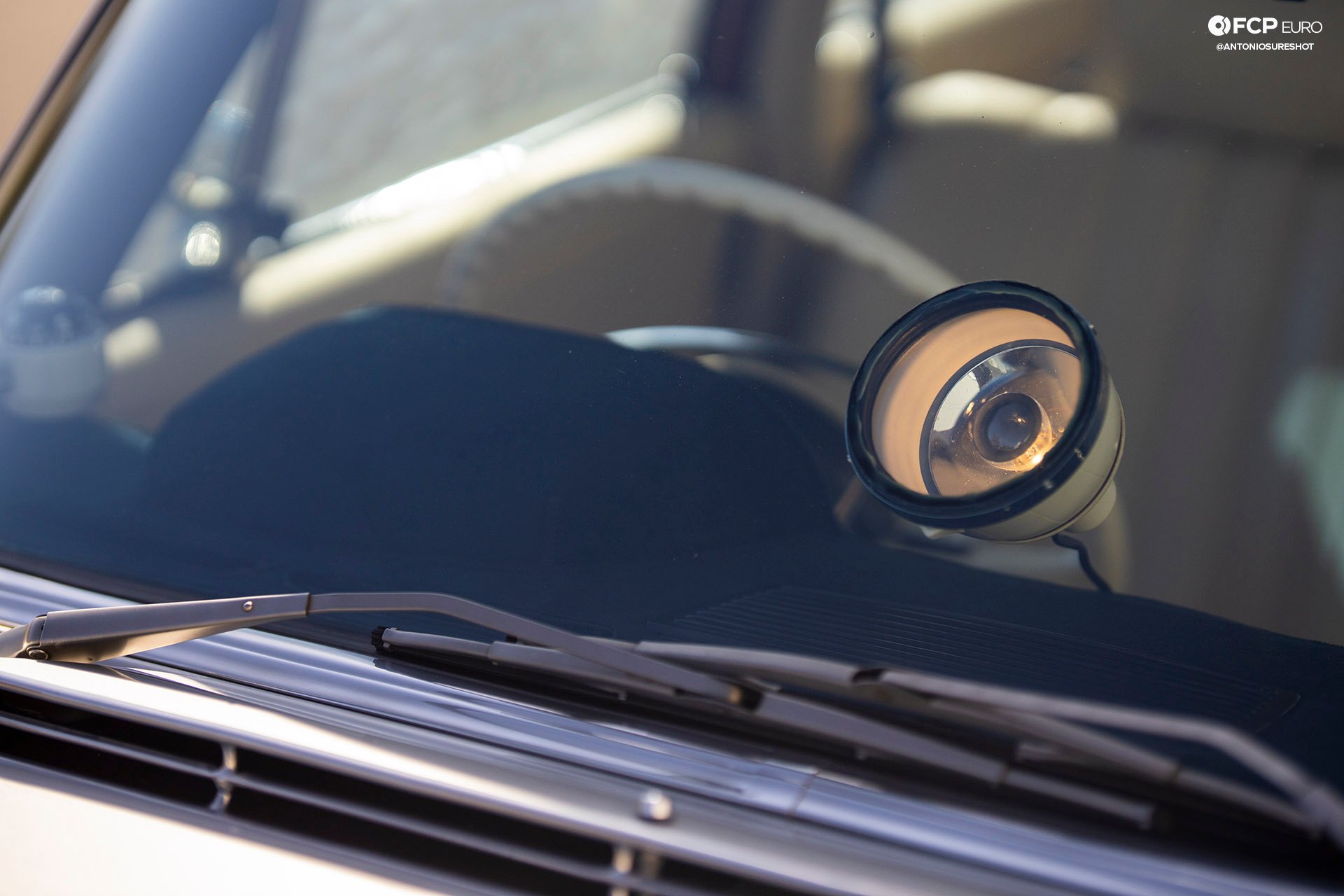 The dash features a suede cover, made specifically to protect it from wear over time from the sun's rays. Even though it covers the dash, it doesn't interfere with the rare, original Mercedes spotlight that's mounted dead center in the windshield. 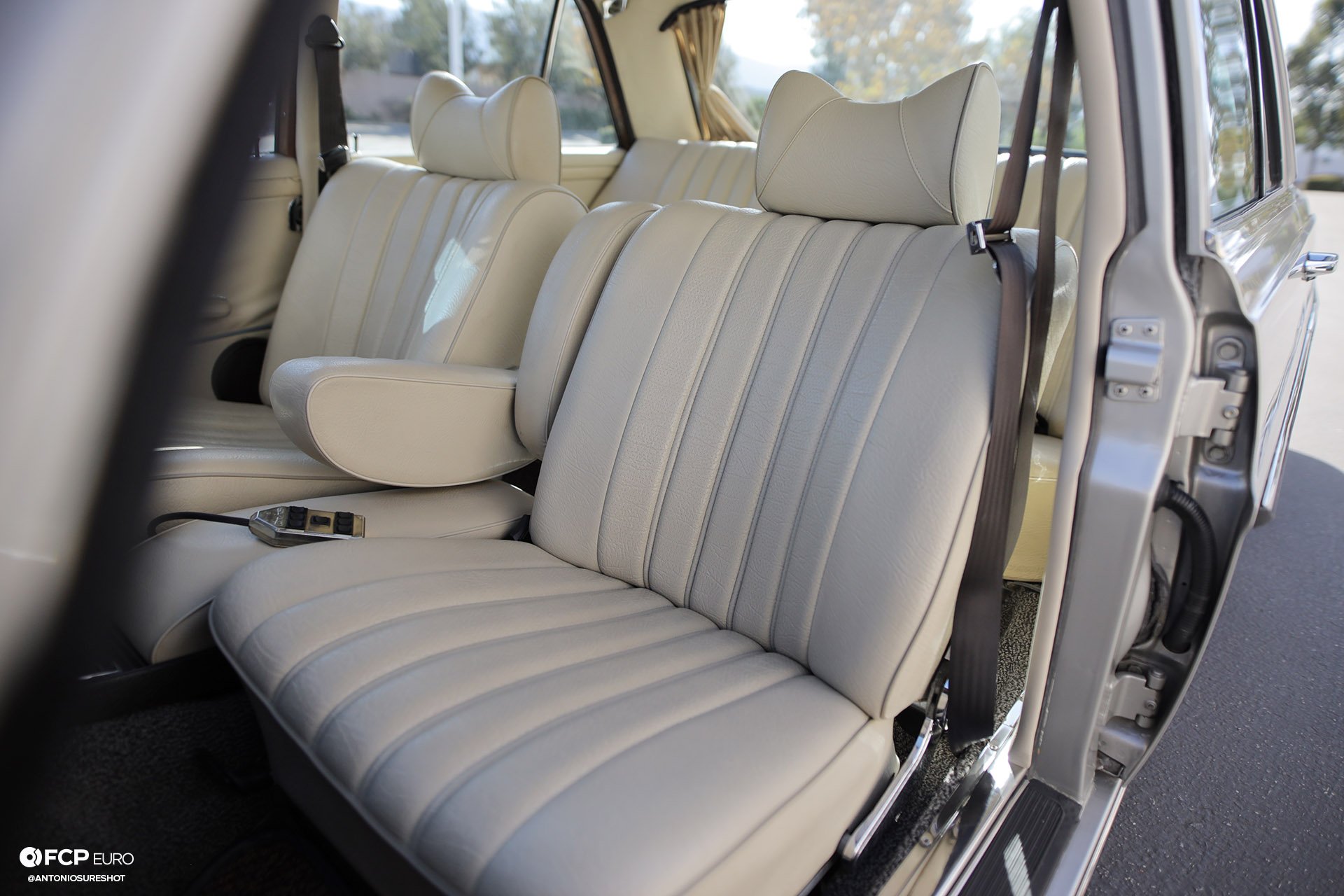 That Parchment leather is the original that came with this car, but Jimmy added OE Mercedes option parts that took a long time to source. The extended armrests, center seat adapter, ivory steering wheel, and many of the non-optional parts are all "New Old Stock" (NOS) pieces from Europe. That means that all of these parts were never opened or used by Mercedes-Benz dealers. They came in their original, but aged, packaging and had never seen the light of day until Jimmy found and installed them on to this 280SE.

You’ll also find interesting, but still OE, parts like C-pillar reading lights, original rear speakers. Again, this is a level of restoration you’d find in something going to Concours or about to be sold on the auction block for a six-figure gavel price.

The level of detail on this build is as astounding as the time Jimmy needed to acquire many of the rare parts on this Mercedes. Remember, this car was last sold in 1973 for the North American market and 1972 for the rest of the world. At best, the production on these parts would have been another five to ten years but stocking at dealerships probably would have been retained until 1985. Again, that is assuming the best-case scenario, but that’s also over 20 years before Jimmy took ownership of this RHD, California registered, vehicle. 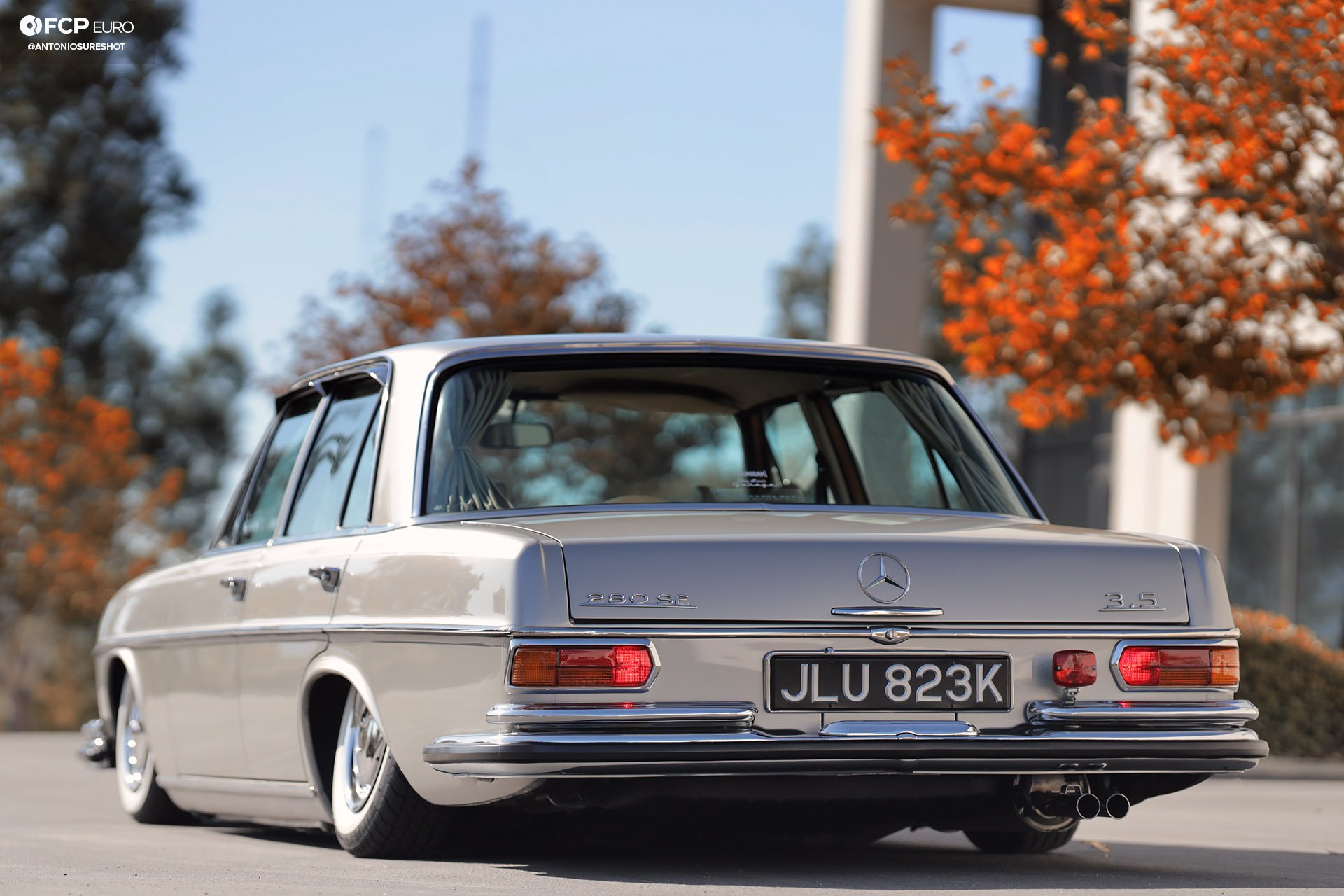 Even so, it is still a VIP-inspired car. It needed to get dropped but not stay that way if Jimmy needed to get over a speed bump or deal with the legendarily horrible side streets of California. You’ll find a tasteful addition to the rear trunk of a wood floor, but one that doesn’t interfere with the tool kit and wheel aid tool. This was needed to fit the five-gallon air tank and the dual Viair 480C compressors. 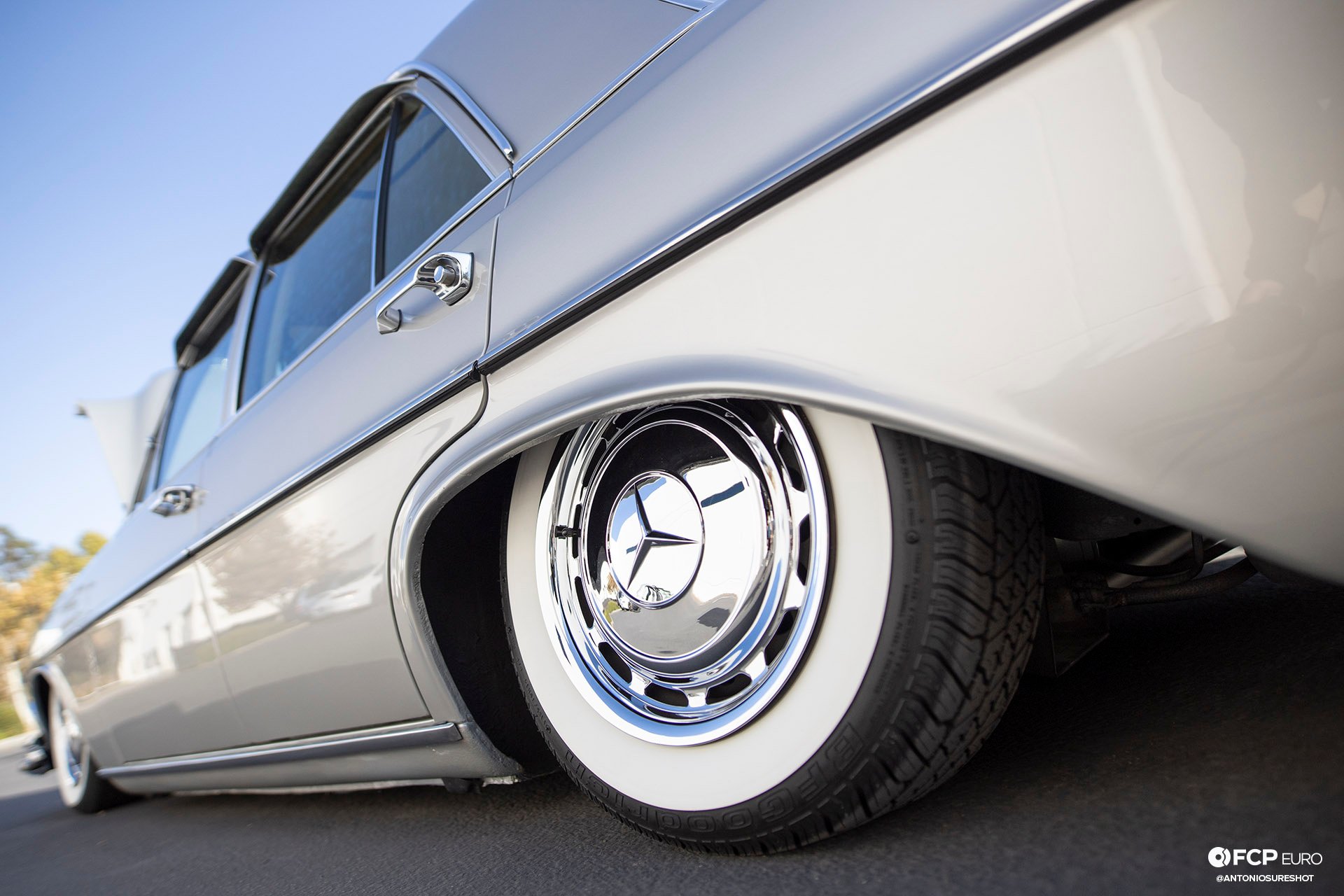 The air suspension system uses Universal Air Suspension airbags with their controller. It allows for full front, back, and side to side adjustments. You also can’t help but admire the OEM 14-inch wheels with original, triple-chrome hub caps and whitewall tires, which look just perfect on Jimmy's Benz. 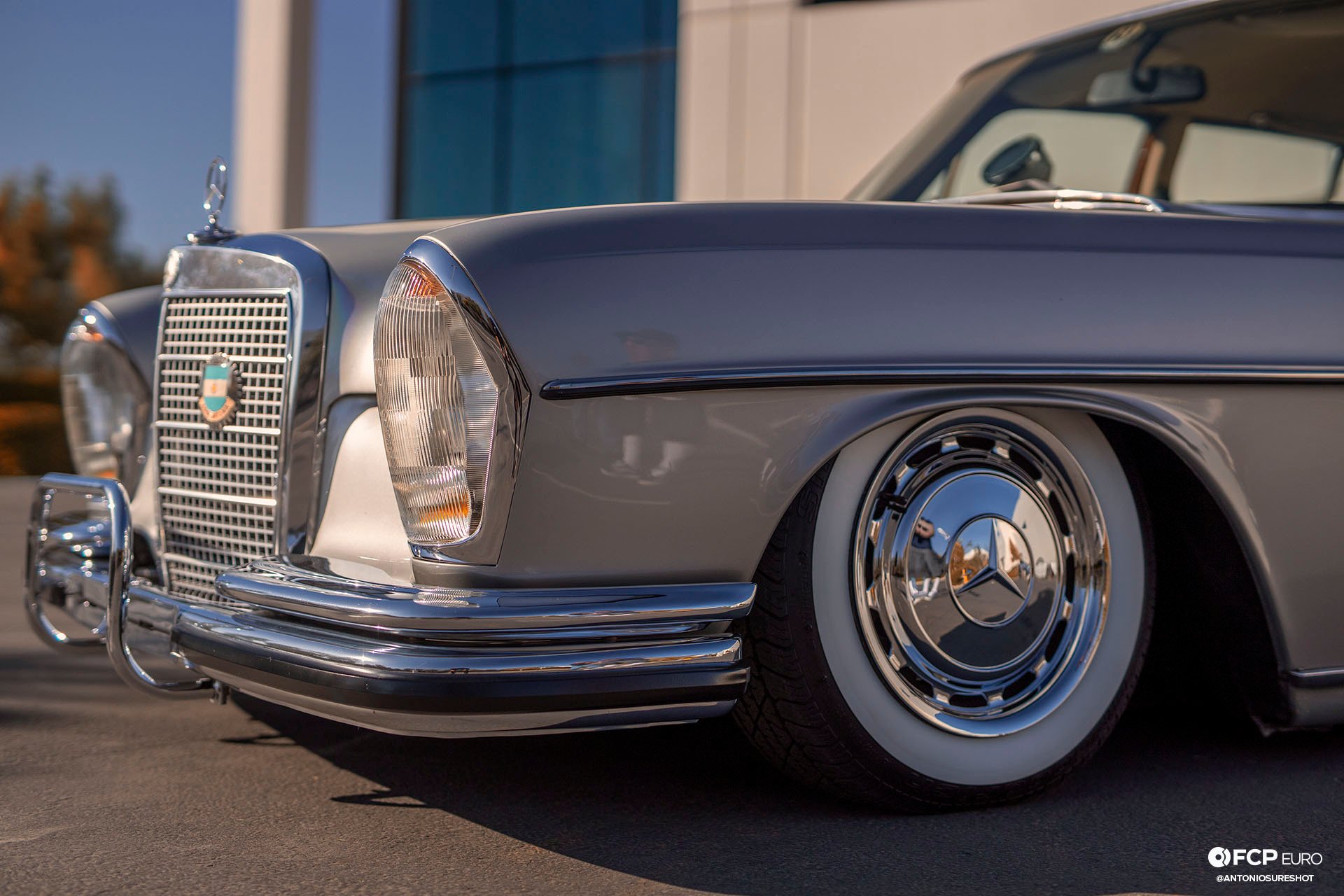 The headlights are not only the European version but also made for RHD. The right headlight has a specific cone shape in its diffused lens to modify the light beam. LHD beam patterns will have a more flood pattern on the left-hand side while the right is more like a spot pattern. RHD is the opposite of that, but since Jimmy’s car doesn’t use HID lighting, opposing drivers don’t flash him while he’s driving down the road. 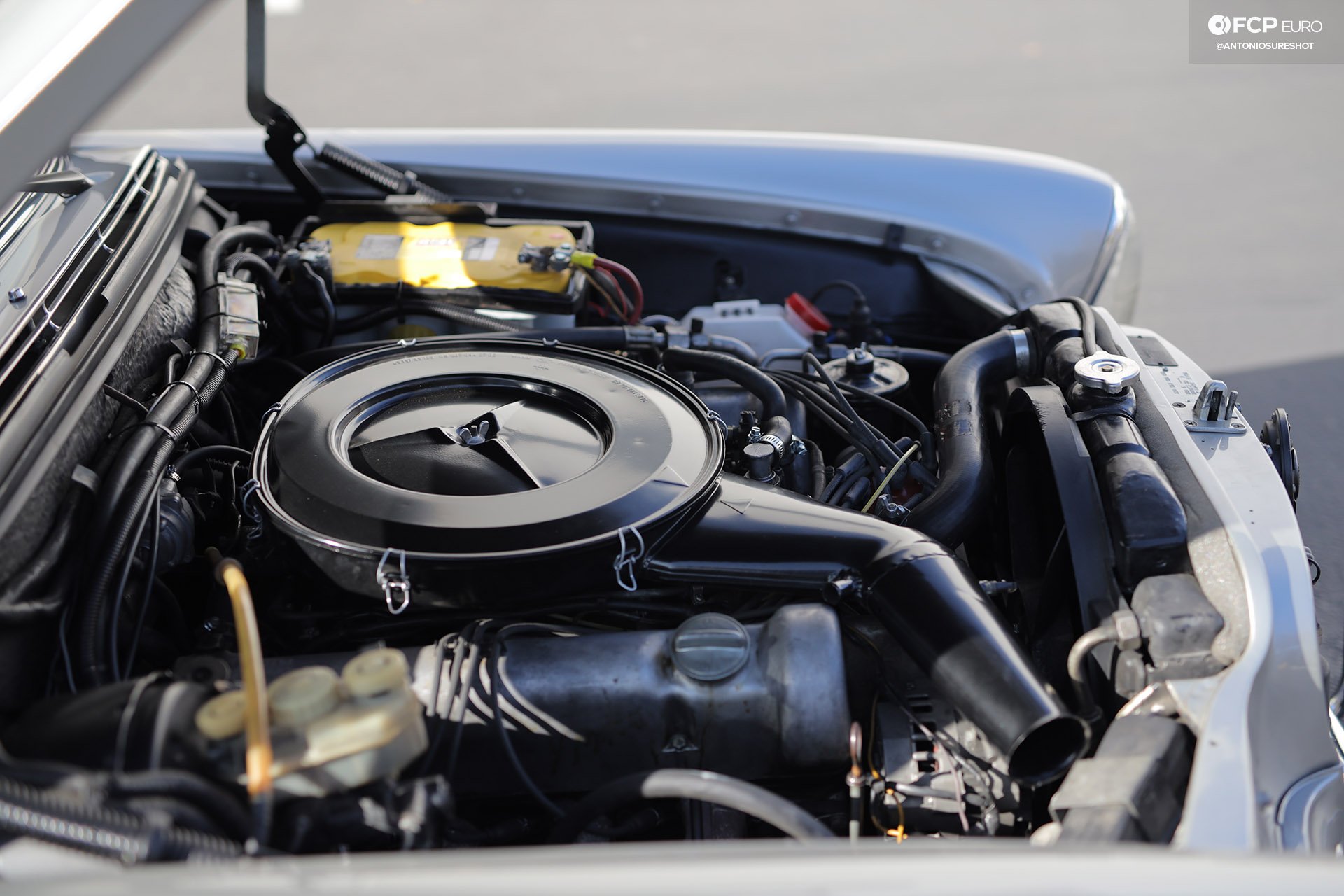 You’re also going to find a nearly original 3.5-liter V8 under the hood. We say nearly only because it does feature an upgraded alternator to help deal with the additional electrical draw of the dual Viair pumps. It also features an upgraded Pertronix II electronic ignition conversion, but everything else uses NOS parts.

We are fairly certain you’re going to have a hard time being upset with this car. Even if you are an absolute W108 purist, you can’t take away the time, dedication, and use of original Mercedes-Benz parts like Jimmy has. If you were to install the original suspension, it would likely be the greatest restoration you’ll find of any 280SE.

And that’s exactly why Jimmy did it. “No one has gone to the extent of trying to source rare parts and combine them into a car like I have,” said Jimmy. He did say that he wished he had found a car with better chrome and paint, but admitted that would have made for an even more expensive car, too. 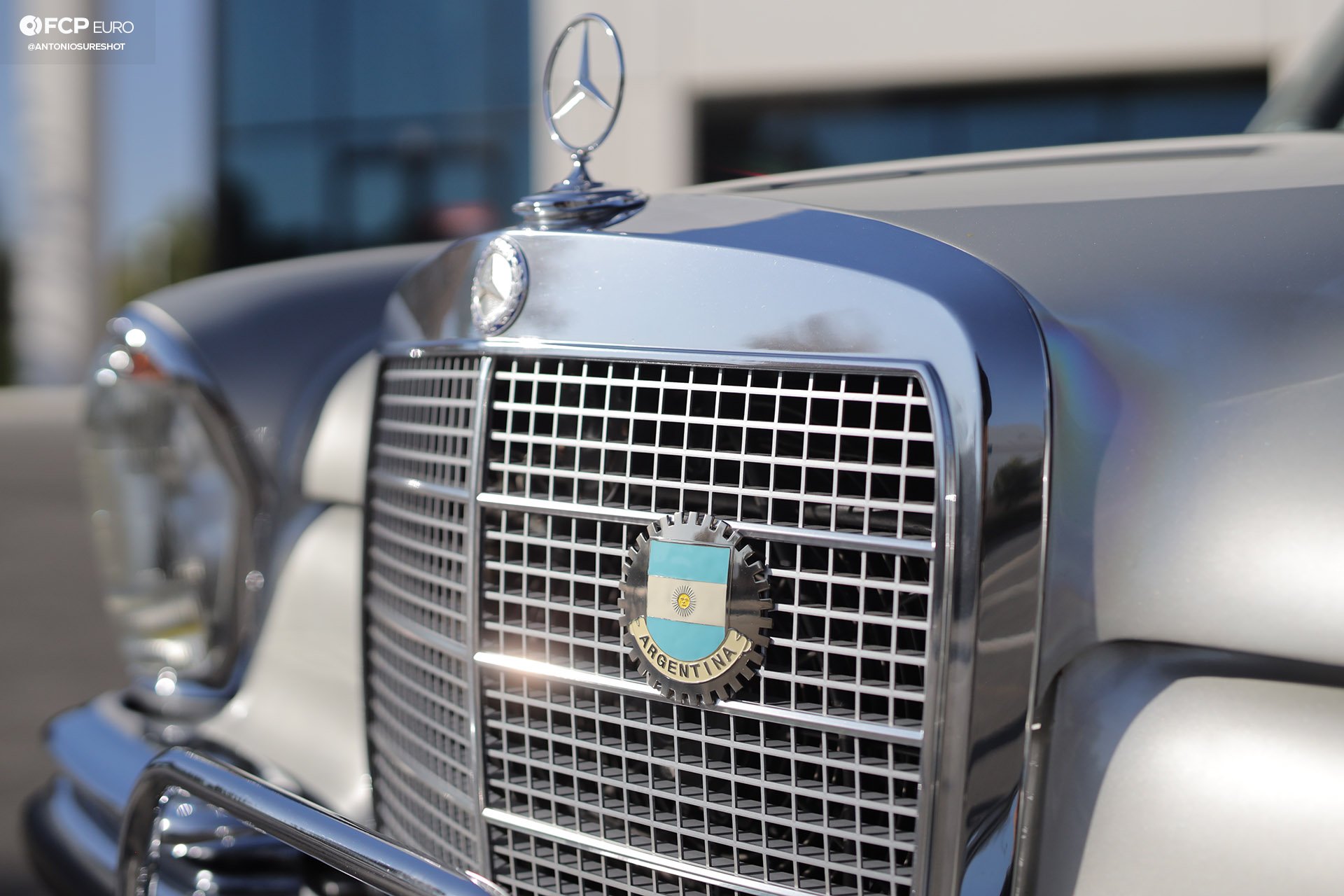 As we mentioned, the car was originally from Jamaica before being imported to California. However, you see an Argentina badge on the grille that stands above the optional, dealer-installed, grille guard. It’s there as an homage to his family heritage. 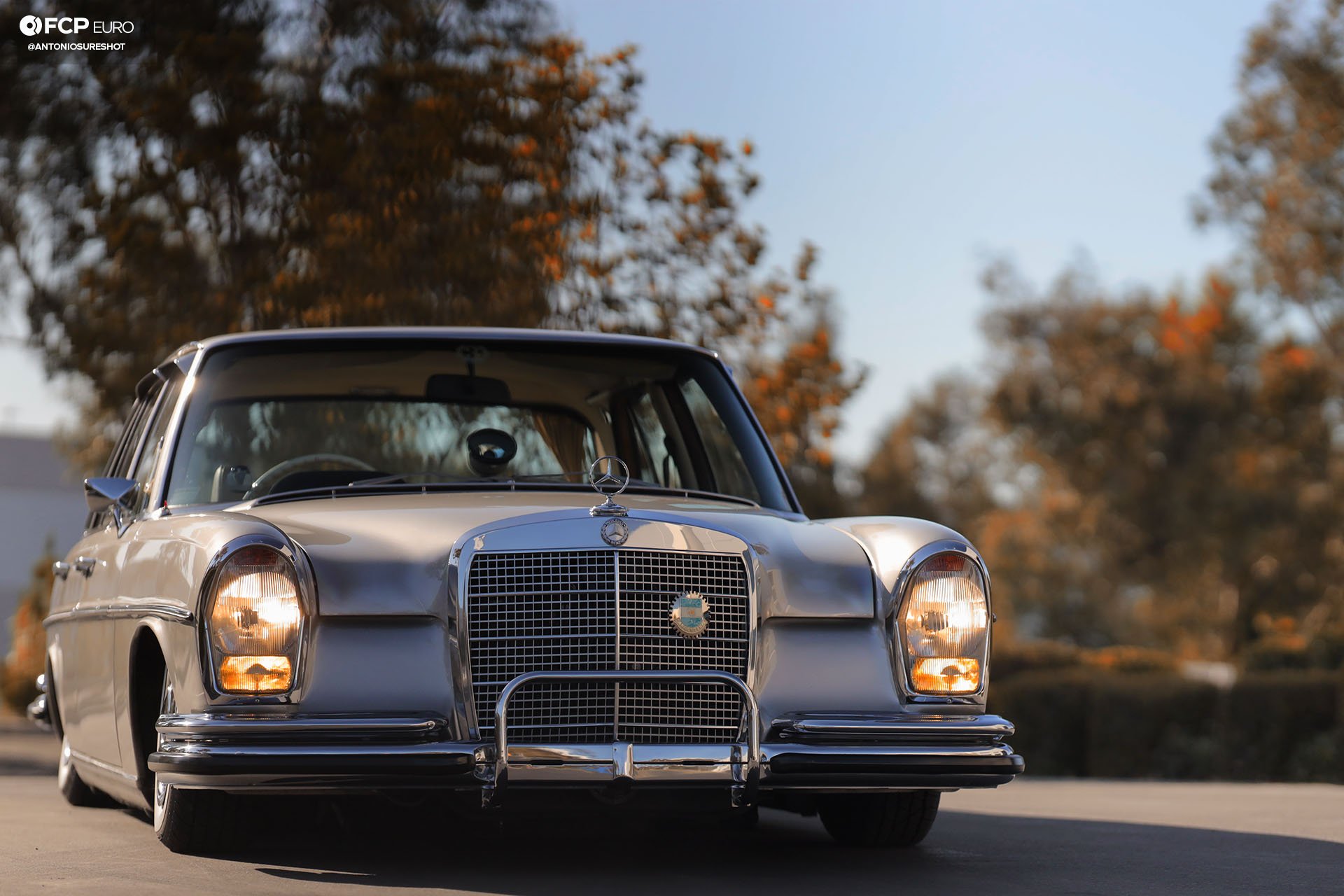 You’re not going to find another car like this. One that has been restored to this condition and laid out on its oil pan. This is a truly unique take on VIP and restoration. Could someone else do it? Sure, but they will also need to take the same amount of commitment as Jimmy did when making this 1972 280SE. We don’t expect that because it’s too easy to modify and too difficult to do a restoration. To combine both is a mastery of self-control that many lack and that’s why we’re confident we won’t see another car like Jimmy’s.

If you like this W108 Mercedes-Benz, you can find additional Mercedes-Benz content at mercedes.fcpeuro.com, as well as more build features like this one here. If there's anything specific you would like to see, or if you have any questions/comments, leave them in the comments section below. 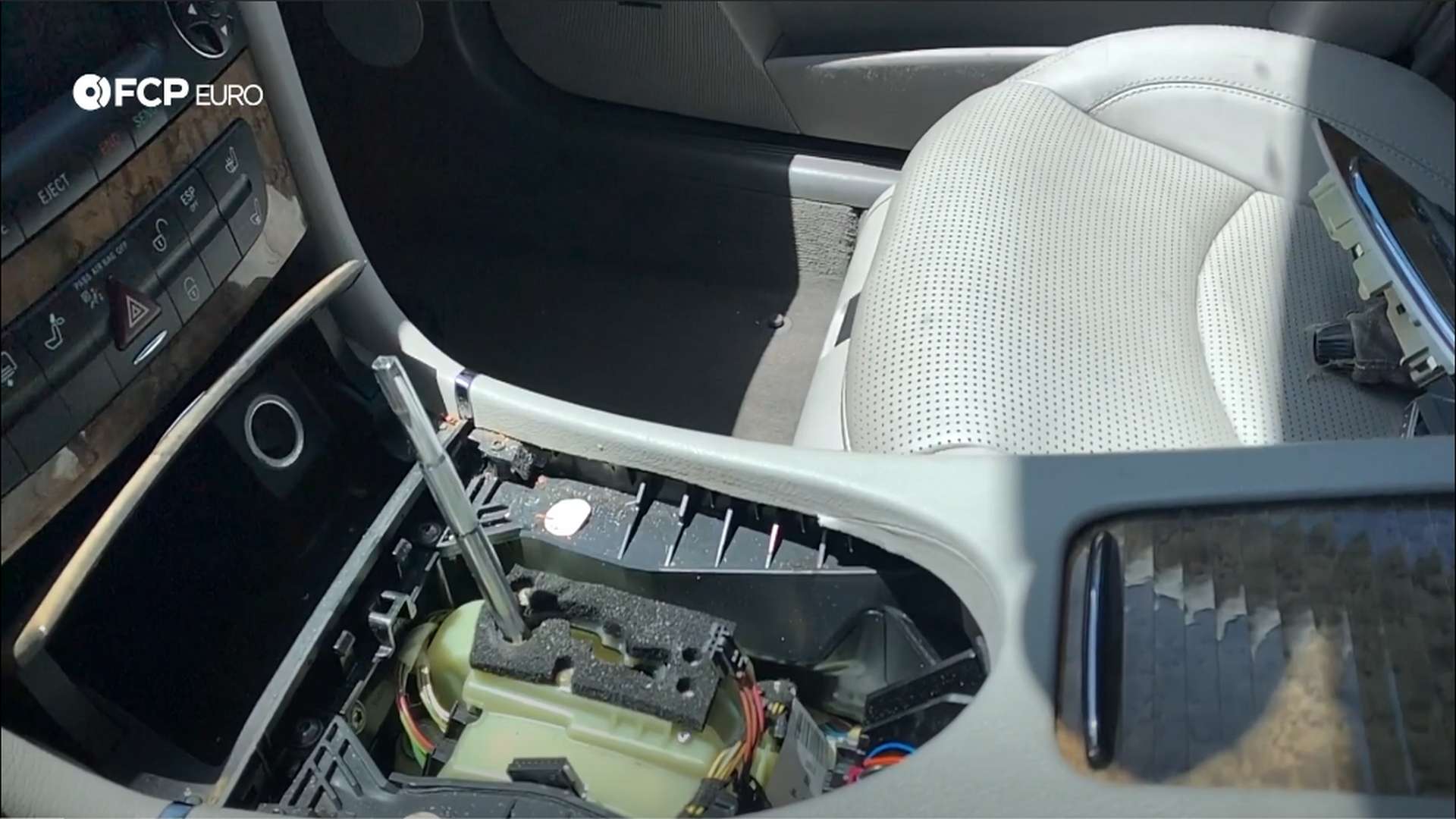