Devin De La Cruz is no stranger to BMW F30s. Ever since the first BMW 335i hit our shores in 2007, Devin has been behind the wheel of one. It was a matter of familiarity when he purchased this originally black Bimmer in March 2015. Like any enthusiast, a plan of a subtle build with a few nods to personality changes. Two weeks after bringing the car home, it turned into a fully modified machine. 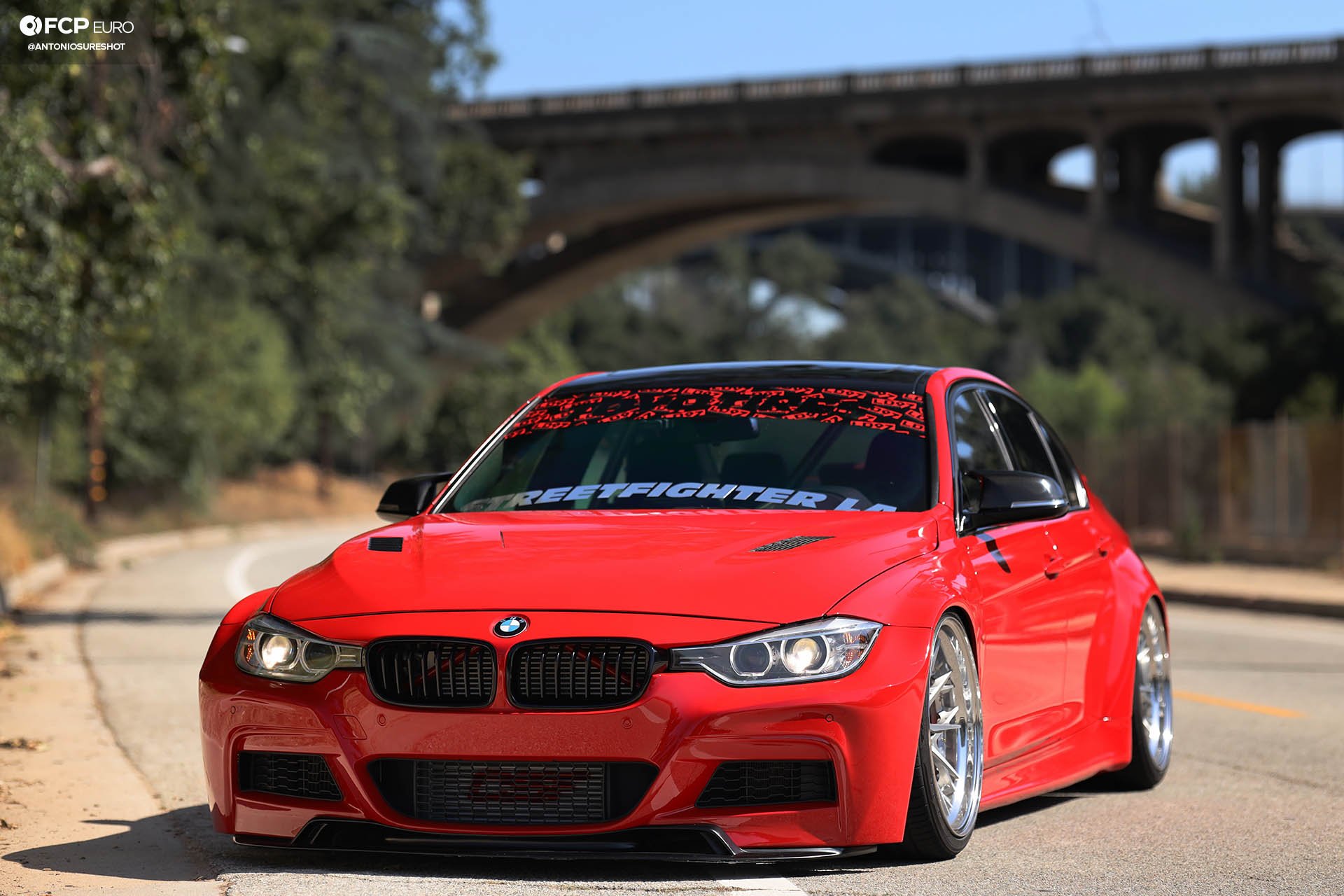 What makes this F30 unique is that it was one of the first to have a widebody kit on it. Devin had his hands in the development of the actual Streetfighter LA kit itself, and while he was the first to have it, it was almost a year gestational process, including having the car laser measured at SEMA's home office in Orange County. Starting with the basic shape of a pre-existing E90 kit, the styling accents were redesigned to be more harmonious with the F30's body lines. Now, after being an integral part of the design process, Devin is rewarded with being the only F30 sporting a Streetfighter LA kit, unlike inferior ABS units, is rendered in durable FRP. 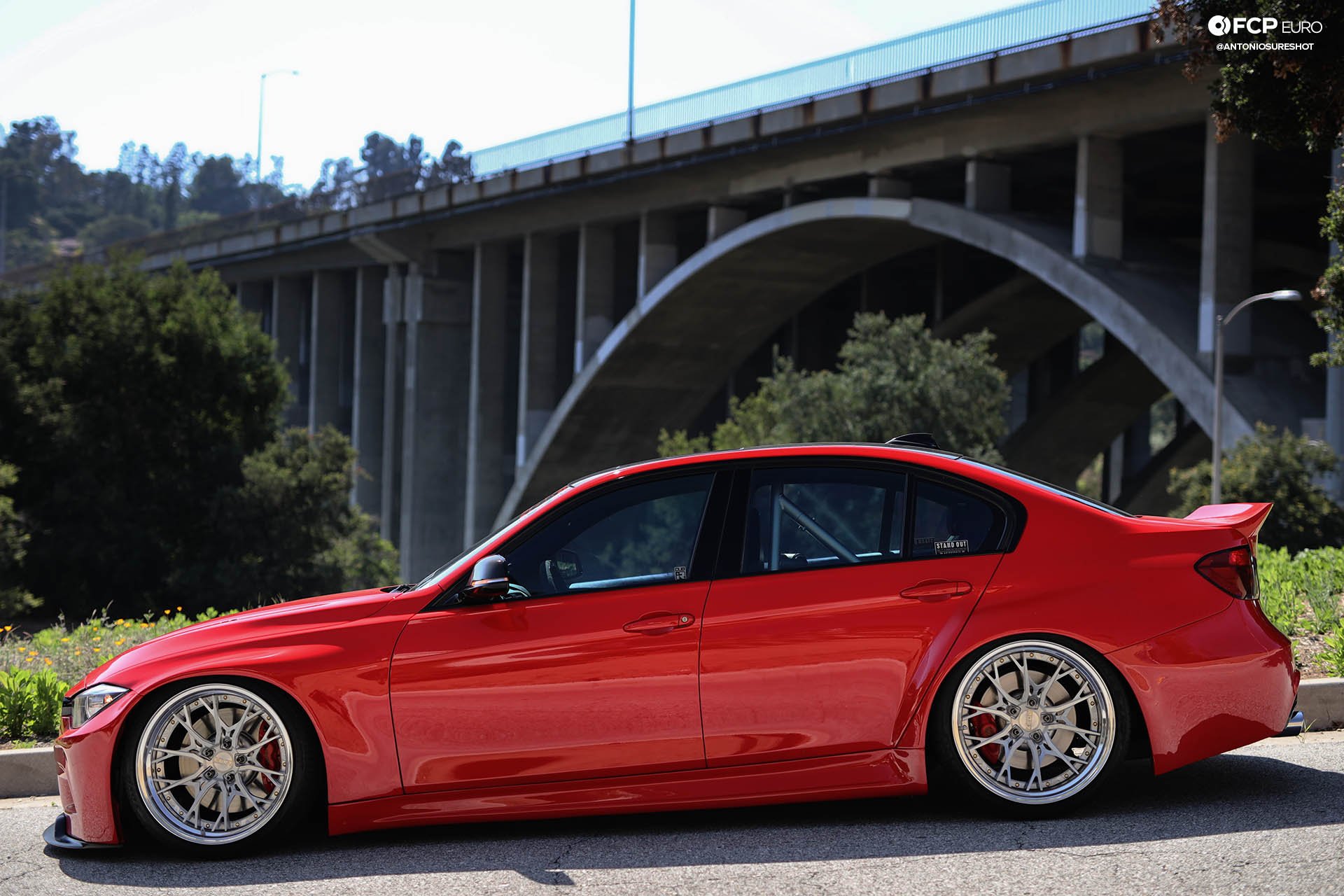 This is actually the third iteration of this red 335i. LT Motorworks, a shop located in El Monte, California, started two weeks after Devin bought the car. Yes, the same LTMW you can get all your Liberty Walk bodywork in this side of the Pacific. It was because of them that the 335i got the distinction of going to SEMA a few years back.  The car, however,  wasn’t always painted in the Ferrari Red "Rosso Corsa" color that was offered as an optional BMW color from the factory (yes, Ferrari red paint from the BMW factory), and with the SFLA kit on it like you see it now. The wheels, aero goodies, and the air suspension came just weeks after he had to satisfy his BMW itch. Like all builds, it actually was amazingly stock in the beginning.  He just needed a driver,  but being an enthusiast,  and having his buddies at LTMW egging him on,  things changed. Shortly after, the car had the distinction of being the first 335i with the Clinched F30 bolt on widebody kit in the United States. One of two, for those playing at home. The last version had Devin giving serious input to the Streetfighter LA crew, owing to his car being the first to debut SFLA's F30 widebody kit.

The BMW electronic performance steering wheel is a neat detail that those unfamiliar with the car can easily miss. Let’s rewind back to a time before airbags dominated the wheel hub. Concept cars and a few production cars of yesteryear had neat features, like clocks, or even gear selectors situated in the axial point of focus. Now, with the aforementioned airbag, that negates anything more than a horn button being placed there. The folks at Bavaria cleverly circumvented that. The top of the steering wheel is always within the driver’s periphery, and the least of their concern navigating a corner. Take note of the small LCD display in place of the yellow band associated with track monster steering wheels. That little screen can be toggled to monitor any vitals and is closer to you than a HUD would be. The wheel itself has lighted portions, that will change color in response to any vehicular dynamic. 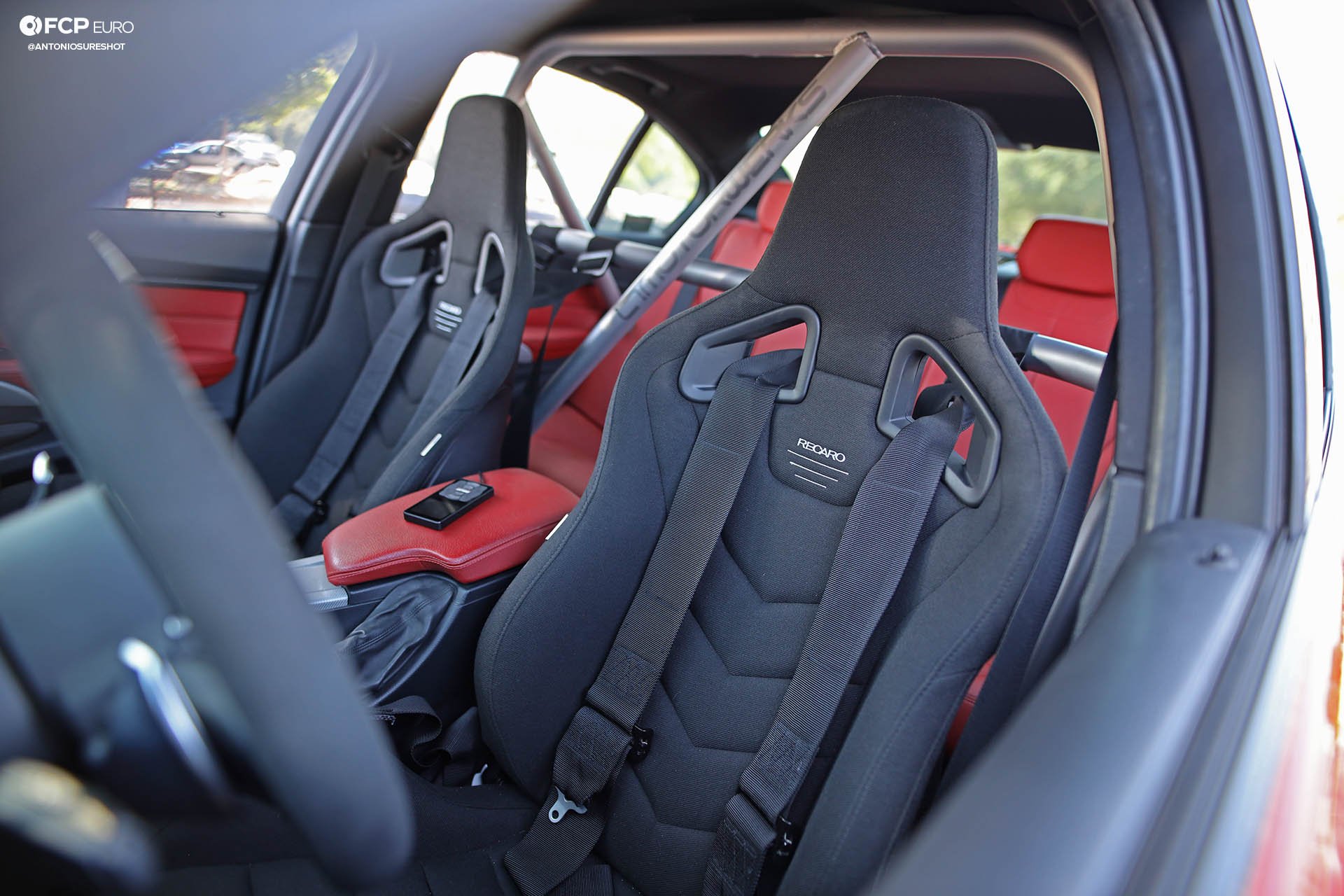 The Recaro Sportster GT seats pop against the red interior, nicely complementing the AutoPower 4Point Mount race roll bar. Devin is actually sponsored by Recaro, and if you look closely, it actually isn’t Alcantara, it’s cloth. Get in a car on a hot day, and you will understand. 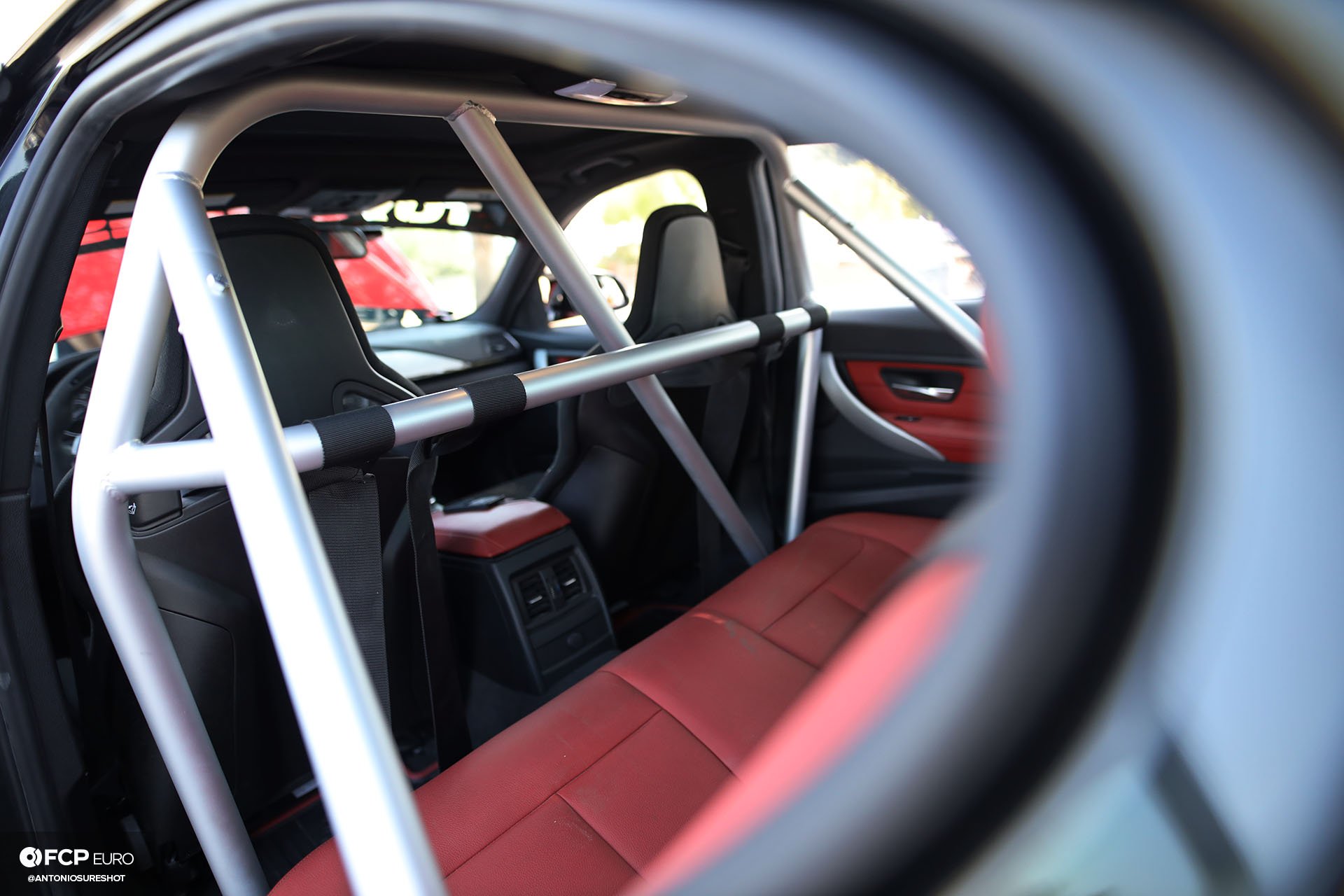 Functionality in a rear seat is hindered significantly with a rollbar, regardless of body style. Devin worked with Autopower to make the 4Point as aesthetically integral. That is an appreciative detail for any streetcar to take the time to make the cage look as sanitary as possible. It is unintrusive, hugging the body as close as possible while looking as factory as possible. Devin and the LTMW crew took great lengths to accomplish a tidy fit. This attention to detail is apparent in the way the bar fits against the upholstery as it pierces the rear seat cushion. Not content with hacking a large hole,  it is a tight fit, and the upholstery doesn’t buckle or wrinkle around the bar. 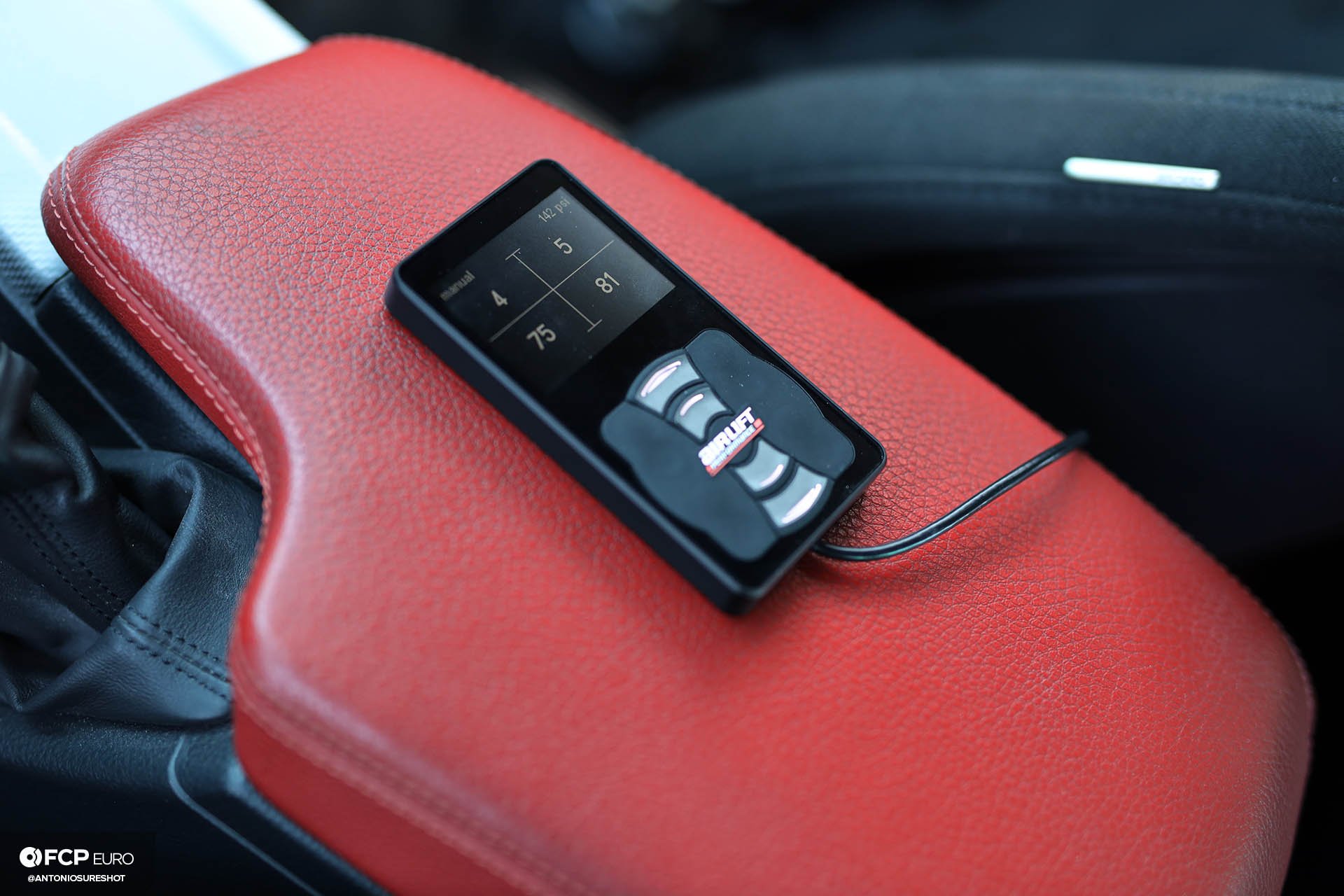 The suspension has been an integral component of Devin's build since the word go. The Airlift 3P system is always at the driver’s fingertips. The beauty of an airlift kit is the suspension ride height adjustability. One truly has the best of all worlds with bags. How many stanced cars can conquer speed bumps? 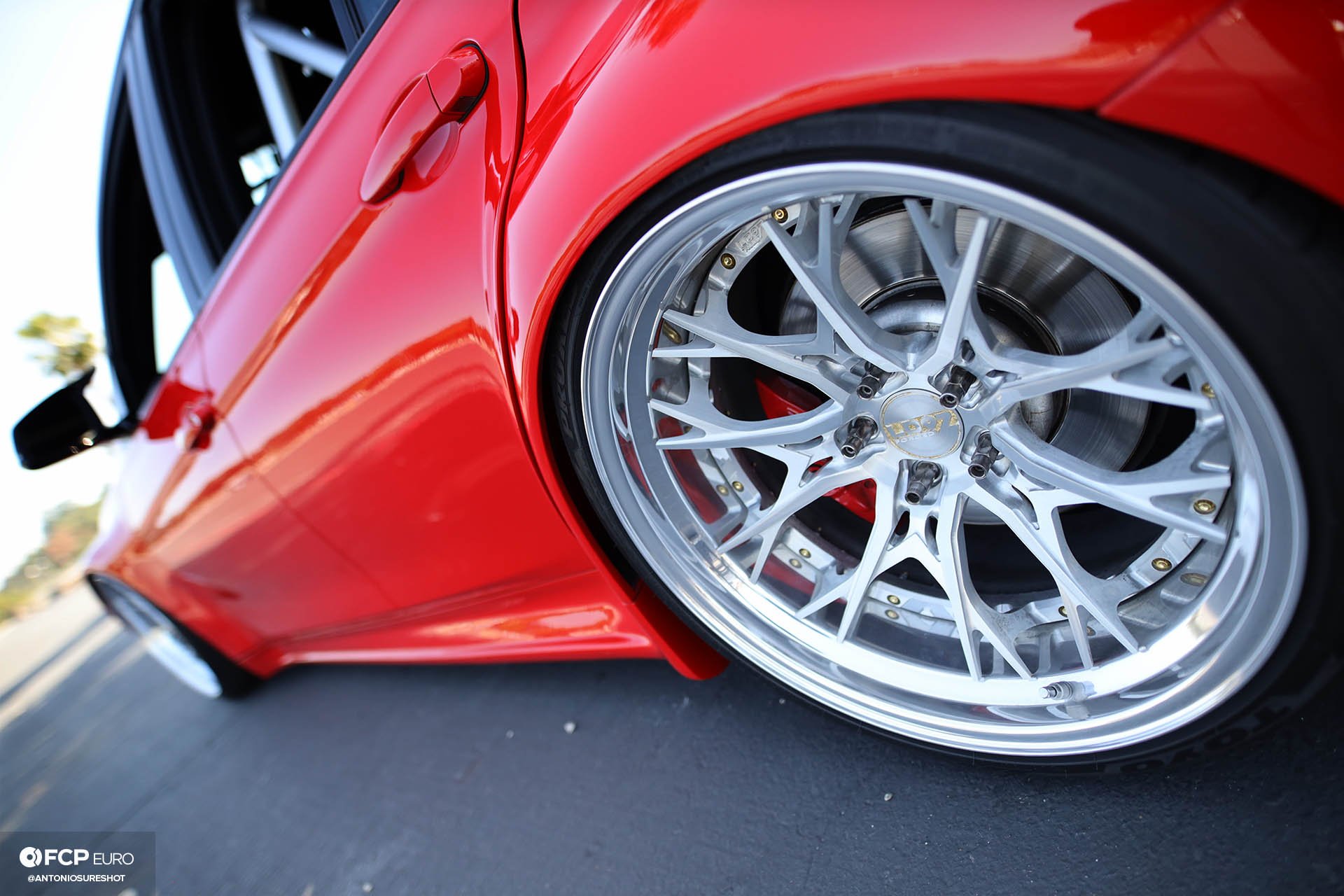 Thanks to connections from LTMW, Devin was able to work with LD97 Wheels, and their LD07 model couldn’t be a better pair with the Streetfighter LA bodywork. The twenties, eleven inches wide in the front, and twelve and half in the rear, provide plenty of support for the massive Toyo Proxes to transfer power and handling to the ground. The airlift kit does a sublime job of keeping the wheel wheels full of wheel and tire. 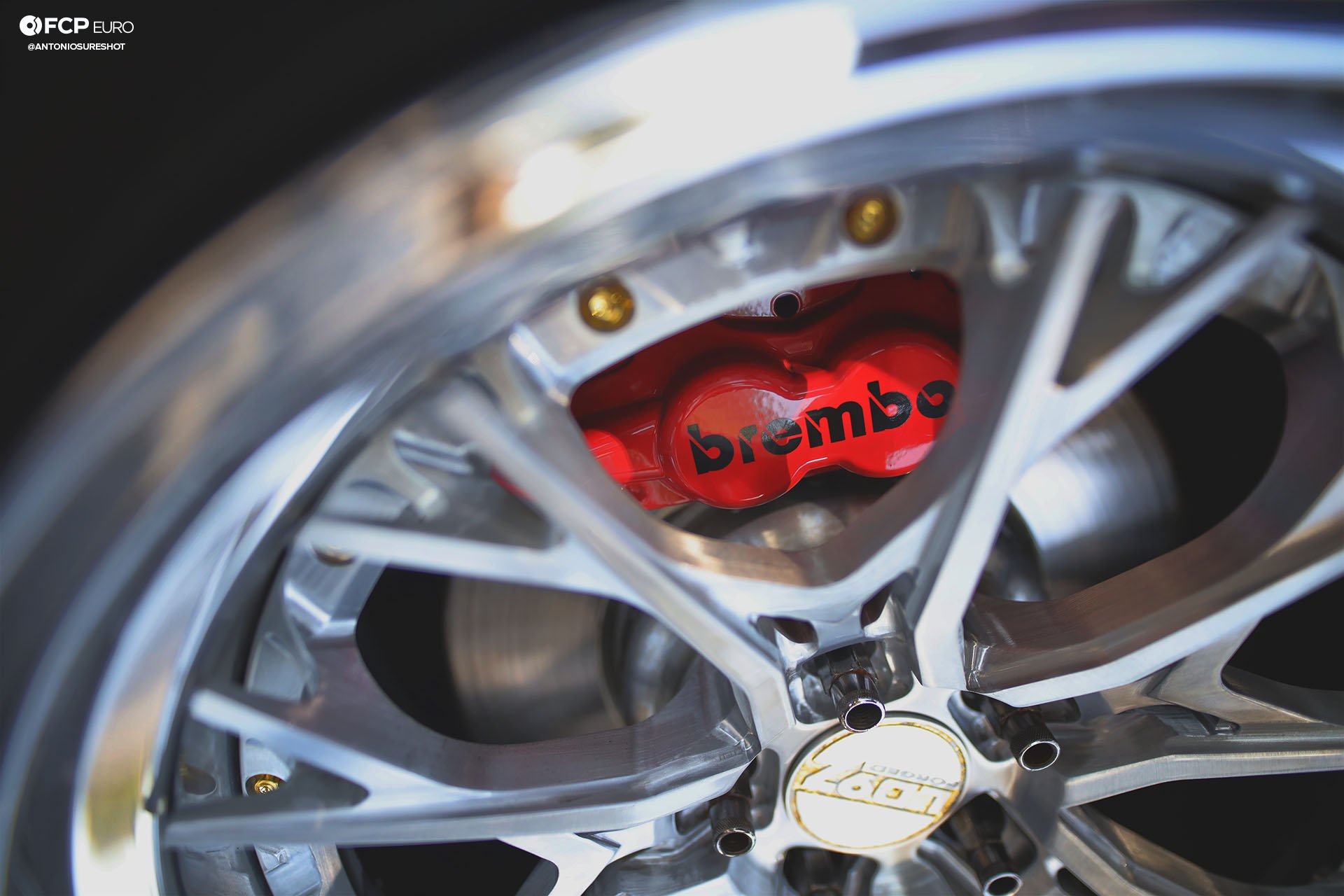 An obligatory mod is the M-Performance Brembo setup. BMW was among the last marque to adopt the calipers as a fashion statement, again, owing itself to technological advances in wheel architecture, and it doesn’t look like a concept leaving styling studios any time soon. Four-piston brake calipers have been seen on showroom floors for five decades, and it looks like only constant refinement is their future. PSA friends: rattle canning your calipers red to emulate this will not make your car stop better. 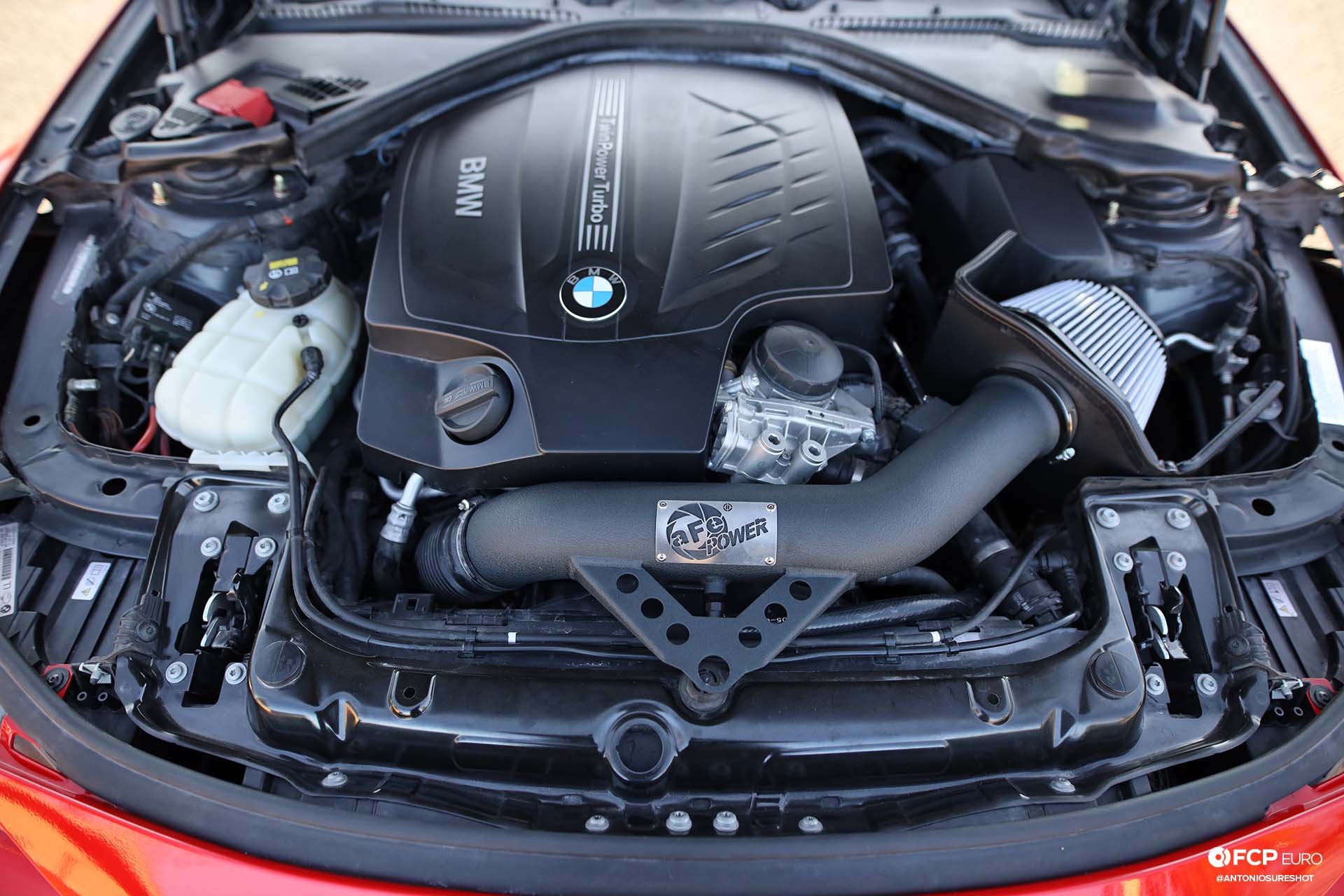 AFE Power, known universally in truck circles, also supports the BMW aftermarket sector as well. The N55 engine breathes a little easier thanks to an AFE Power Stage 2 intake manifold being fed by that twin scroll turbo that has been an N55 stable. The twin-scroll has been used by Mini for almost two decades, known for virtually zero lag. The AFE intake compounds the forced induction system, resulting in increased streetability, and yes, performance. 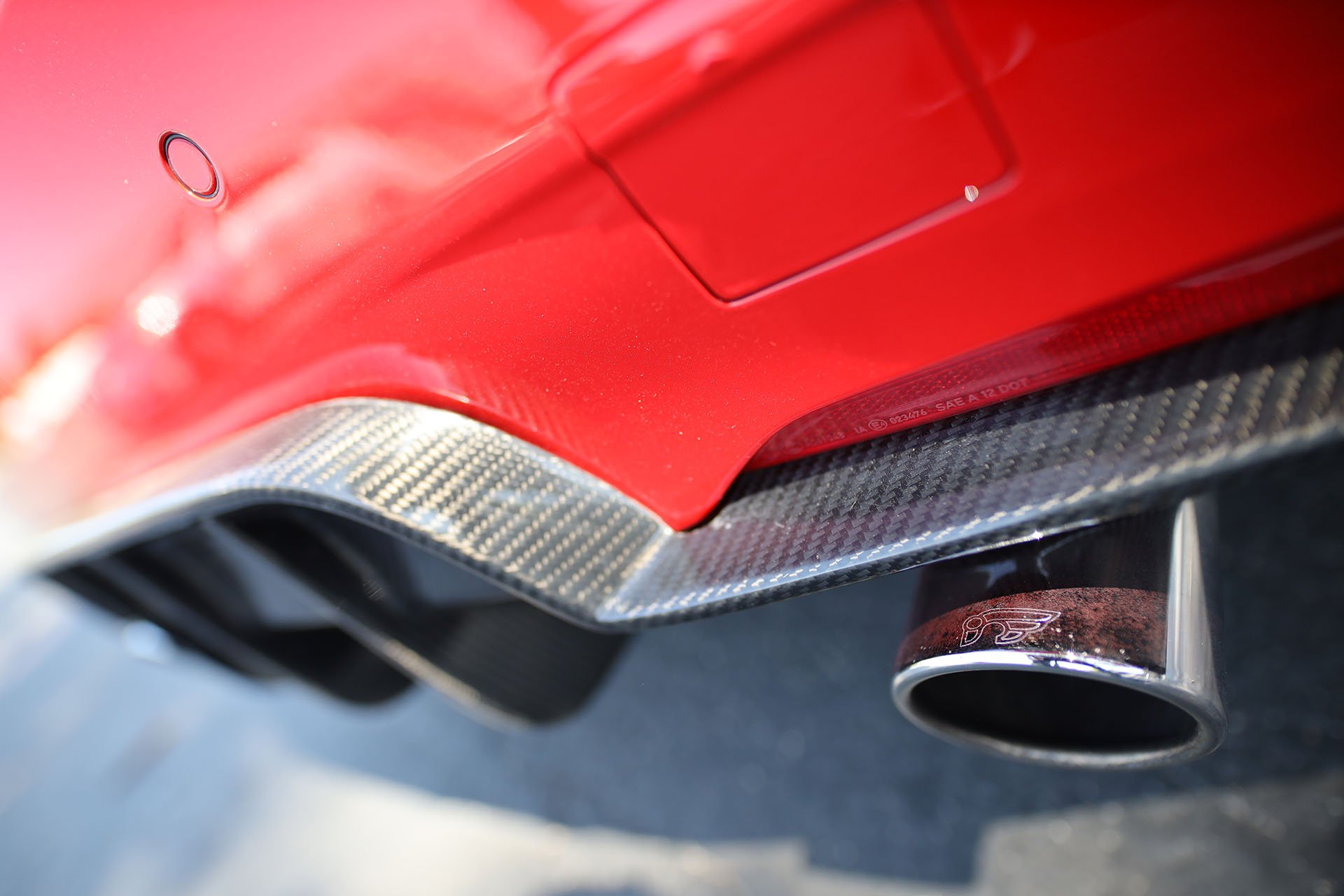 The IPE Valvetronic system terminates just under the Enlaes carbon diffuser. IPE is known among European tuners for its performance increase and that wonderful exhaust burble. Thanks to the variable valving, decibel levels can go from Illegal in the state of California to “No Officer, my exhaust is stock” at the push of a button.

Peeking out from behind the lower grille under the bumper is a high-performance radiator from CSF, which is an important mod for the longevity of any BMW engine.

Overall, there isn’t anything Devin would really change. Like any enthusiast, he had a vision for a theme this 335 was going to have, and he implemented it. He can rely on FCP Euro when the call comes to add to the build when the obligatory turbo upgrade happens, but overall, he’s pretty happy with the car. When you build a car to your liking, is there any chance to be unhappy with how it’s built?

If you enjoyed Devin's BMW, you can find additional BMW-related content at bmw.fcpeuro.com, as well as more build features like this one, here. If there's anything specific you would like to see, or if you have any questions/comments, leave them in the comments section below.