This 2007 Mercedes-Benz SL55 AMG surprises many who expect it to be just another R230 SL55, but Deino Dao’s AMG 030 edition isn’t just another run of the mill SL roadster.

The oval headlights, the “Kompressor” whine, and a 5.5-liter V8 – those are the classic Mercedes Benz signatures us older fans of the AMGs recognize quickly. Especially those round headlights as they were the uniting face of the brand of that era. They were certainly unmistakable as you watched the CLK roar around the tracks during the return of the DTM series in 2000. It’s part of the shape that brought Deino to like this era of the R230 SL55 AMG. It’s also not his first 030 Performance Package model, either. 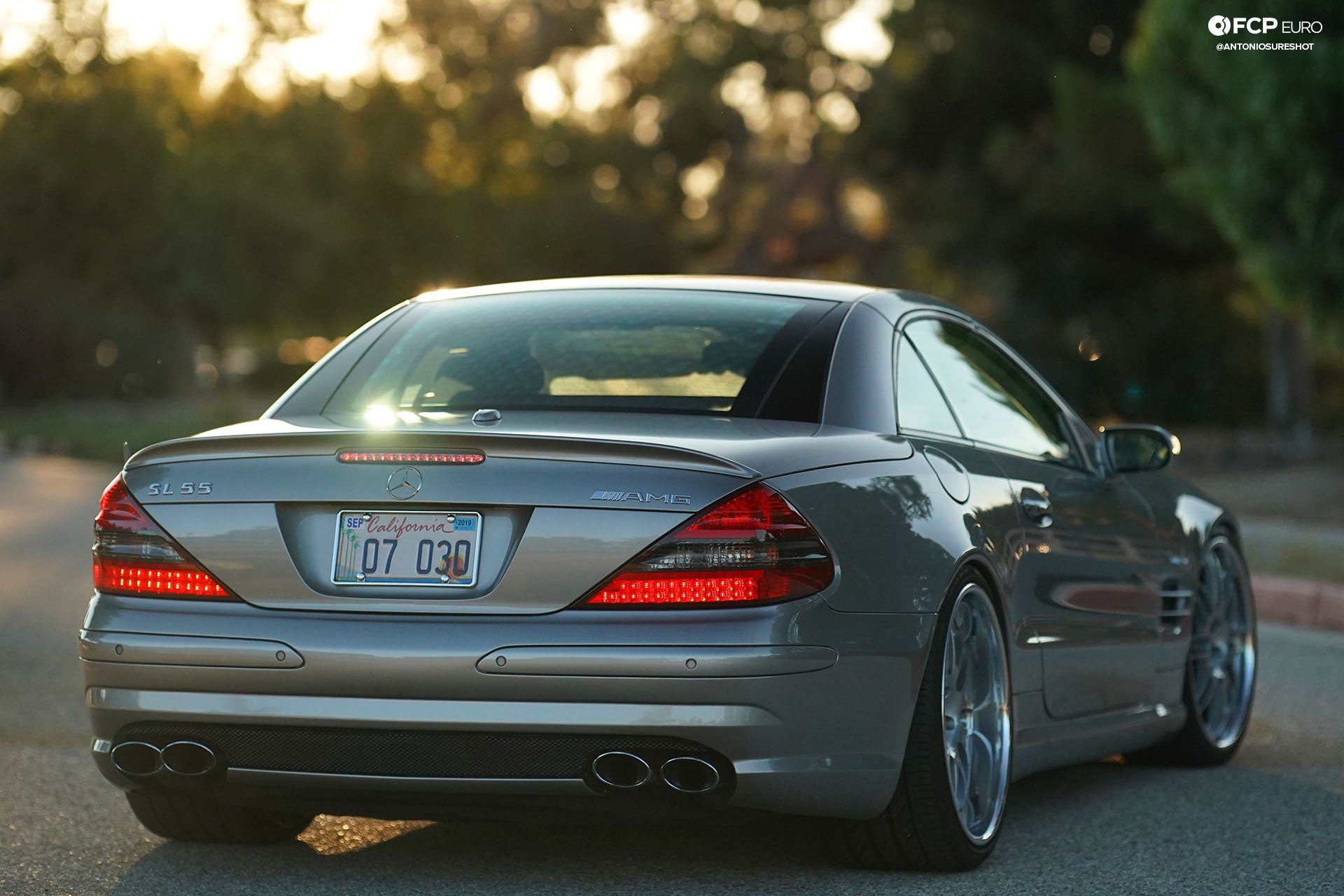 Unfortunately, his previous Mercedes 030 met a horrible fate after it was T-boned in the passenger side. “If it had hit the driver’s side, you wouldn’t be talking to me,” Deino gravely recalls. After getting it settled with insurance and lawyers, he had enough money to purchase one but wasn’t even sure if he could. As fate would have it, he would find it on eBay. 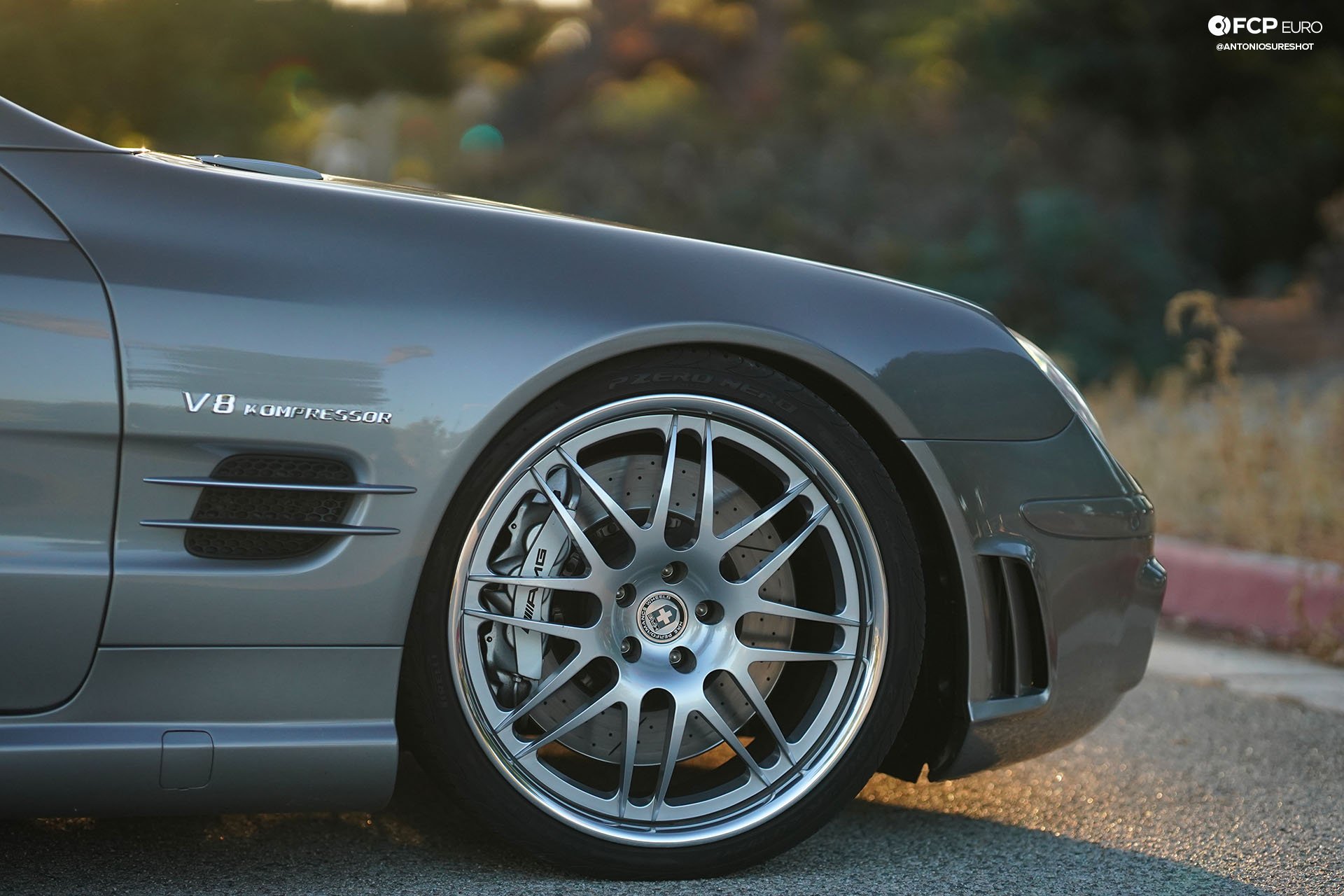 This was a fully optioned out 030, meaning it included the special travel bags that are made just for the SL55 and attach behind the rear seats. He contacted the broker again, sent a cashier’s check for the car and relocating it to California, and began minor work to it.

Even as he was just starting to get the feel for it, people were already impressed with the car. Anyone who thought he just added an SL65 bumper to his SL55 would be mistaken. “These 030s came with a similar bumper to the SL65,” Deino explained, “It was always part of the package with the 030s,” but the SL65 bumper was necessary for this particular car because the 030 package comes with an additional oil cooler just in front of the right front wheel. The “shark gills” on this bumper are functional on that side, and the other is blocked off from the factory.

The wheels on the car are the HRE 840R, a 20-inch diameter, three-piece custom wheel set made for Deino’s SL55. They wear a set of Pirelli P-Zero Nero tires on all four corners. The brakes are AMG-specified Brembo calipers with factory two-piece rotors up front. When Dao pulls in to meets, or anywhere he wants to drive his AMG, people assume he’s removed the factory, Nurburgring-tuned suspension and its Active Body Control. Instead, he’s added a LoMo M1 from Lowering Module. This gives him the ability to allow it to raise up above the factory height and even lower it further than the factory control allowed. It even allows for independent axle heights and is still programmable by the steering wheel controls and the instrument cluster, just like factory. 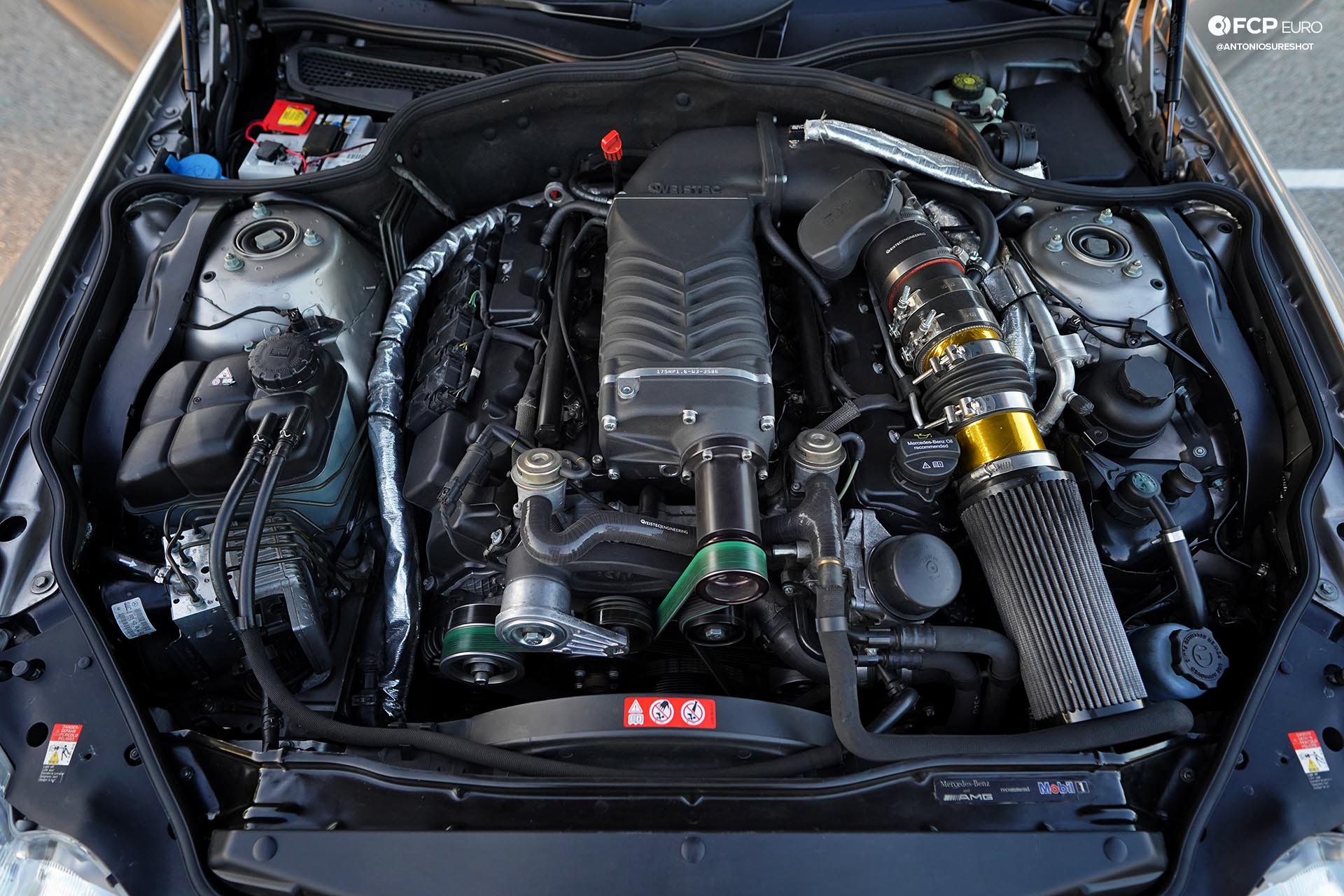 As mentioned earlier, Deino began to install some bolt-on parts until he came to a realization. Instead of just bolting stuff on, why not go further. So, the engine you see here isn’t the same as it left the factory. It also goes far beyond the Weistec 3.0-liter supercharger. “My goal was to take this fully optioned from the factory 2007 SL55 with the 030 Performance Pack – that was the last generation of the R230 – and max out its form and function,” said Dao. The stock engine only had about twenty-nine-thousand-miles on it before he took it out and opened it up. 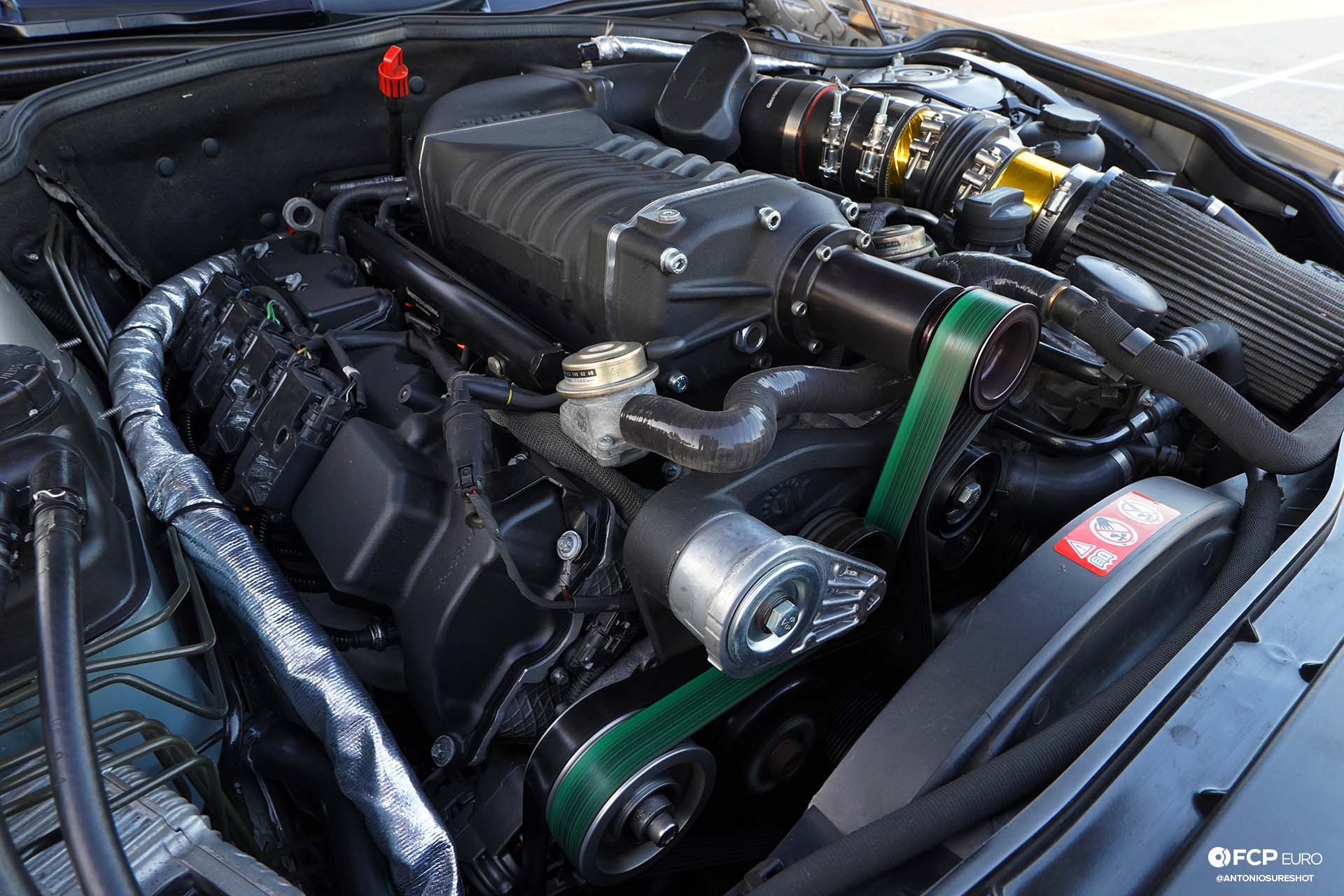 Inside this engine are a set of Darton Iron-Sleeves for the larger Carrillo Pistons and matching connecting rod set. The ARP head studs keep the CNC ported heads clamped down, even under demanding boost pressure, while the AMG SLR Camshafts flow the charged air in and out. The exhaust goes through a pair of Swaintech ceramic coated Kleemann mid-length headers, then pass through the Kooks Ultra Hi-Flow Green catalytic converters, and finally out a custom three-inch exhaust with X-pipe. Even so, the engine isn’t loud at idle or cruise and, best of all, the mid-length headers with catalytic converters means you won’t get the smell of raw fuel under heavy throttle usage.

The air is cooled before heading into the supercharger due to an AEM Electronics ProMeth system, with its three-gallon tank located in the trunk. The AEM pump sends the water-methanol mixture from that tank to the intake tube. The mixture then atomizes, which draws energy to go from liquid to a mist from the heat of the air in the intake tube and cools that air down. Just before going into the cylinder heads, the Weistec Heat Exchanger cools the now boosted air. The coolant for the supercharger heat exchanger goes to its own reservoir and the additional piping gives the system a larger capacity. “I see (air intake) temperatures about 40- to 50-degrees Fahrenheit (above ambient air),” says Deino.

Since then it was put back together, the car has been driven to about 35-thousand-miles. Not a lot, but those changes took some time to complete as the race engine machinist he hired for re-sleeving and honing the engine block to accept the new forged pistons really took his time on the build to make sure everything was done to spec. This didn’t bother Deino as he himself is very meticulous about how a build is done. It also means that his cars work with very little issues and no check engine lights. This is also thanks to the ECU tune by Jerry over at Eurocharged Performance.

The only light that does remain on is the tire pressure warning light. Unfortunately, the HRE 840R wheels don’t work with the Mercedes tire pressure sensors. You may fault him after explaining how particular he is, but he is rocking a set of beautiful custom wheels. 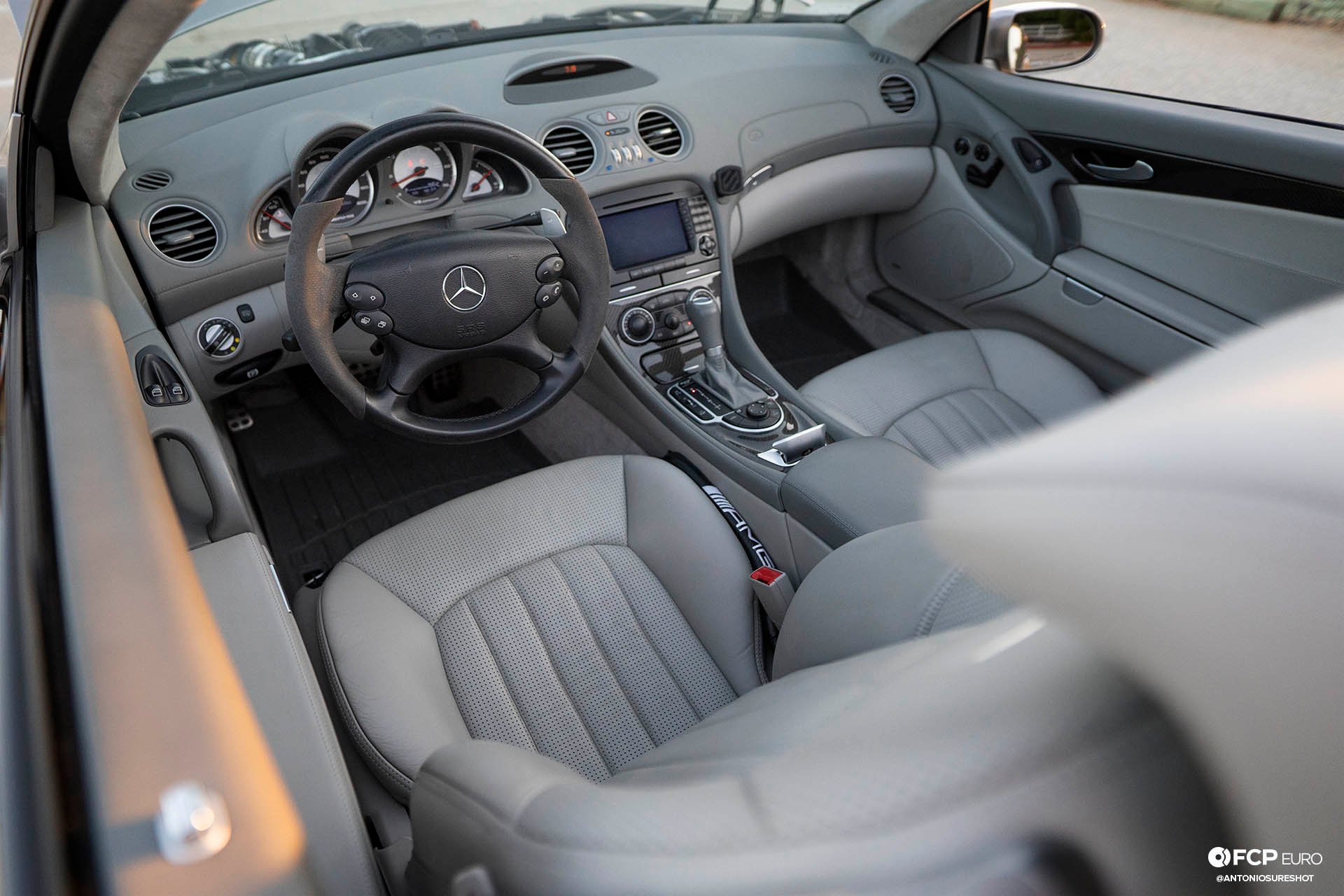 Another thing that separates the 030 Performance Package from a regular SL55 AMG is the use of suede on the steering wheel and Alcantara on the A-pillars, lower trim pieces, and in the retractable hard top. You’ll also find that this later version of the R230 AMG uses real paddle shifters over the buttons on the steering wheel the previous version had. 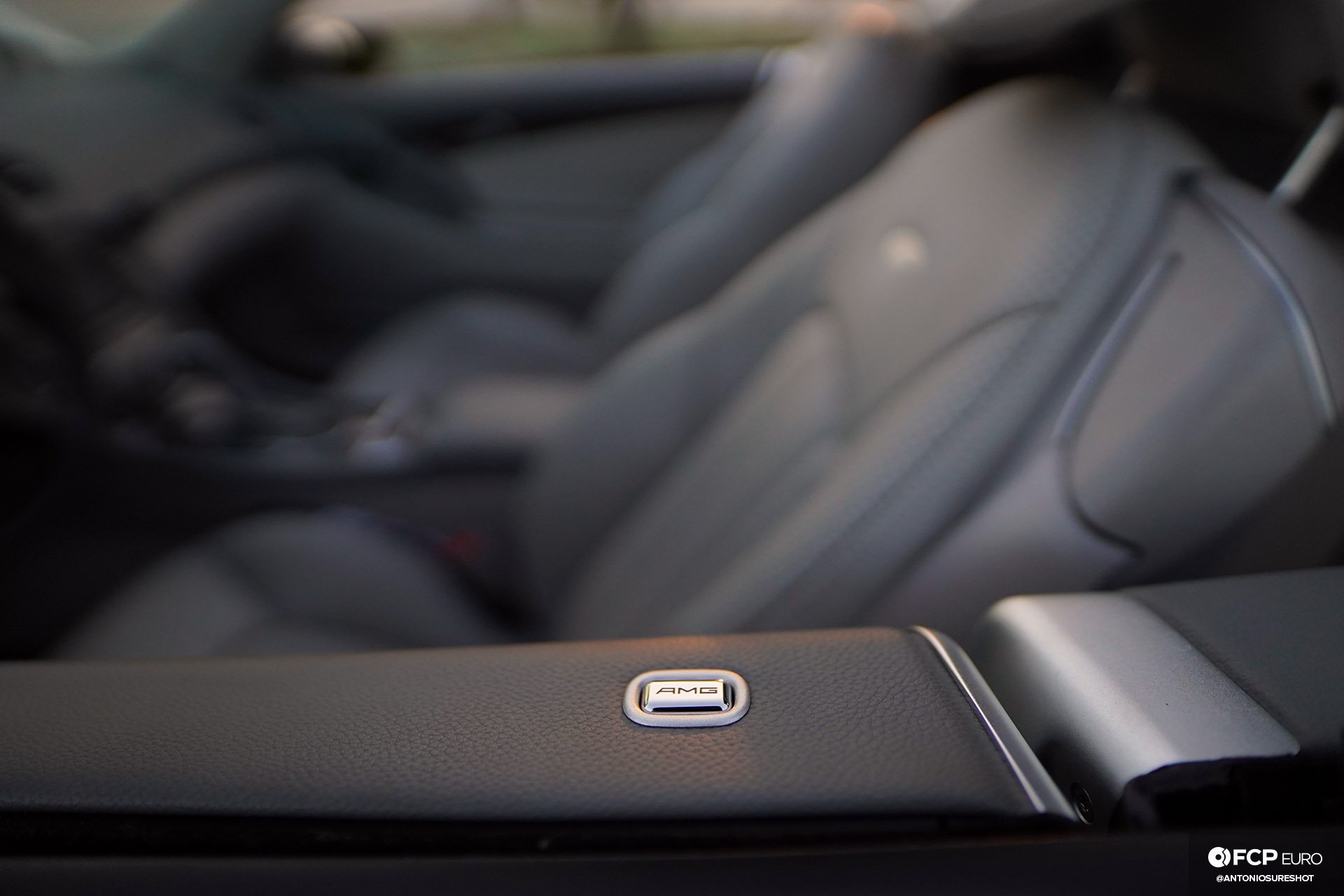 There are the AMG details found all over the car, so those parts remain. Though, there are some functional changes done that you once again don’t see. 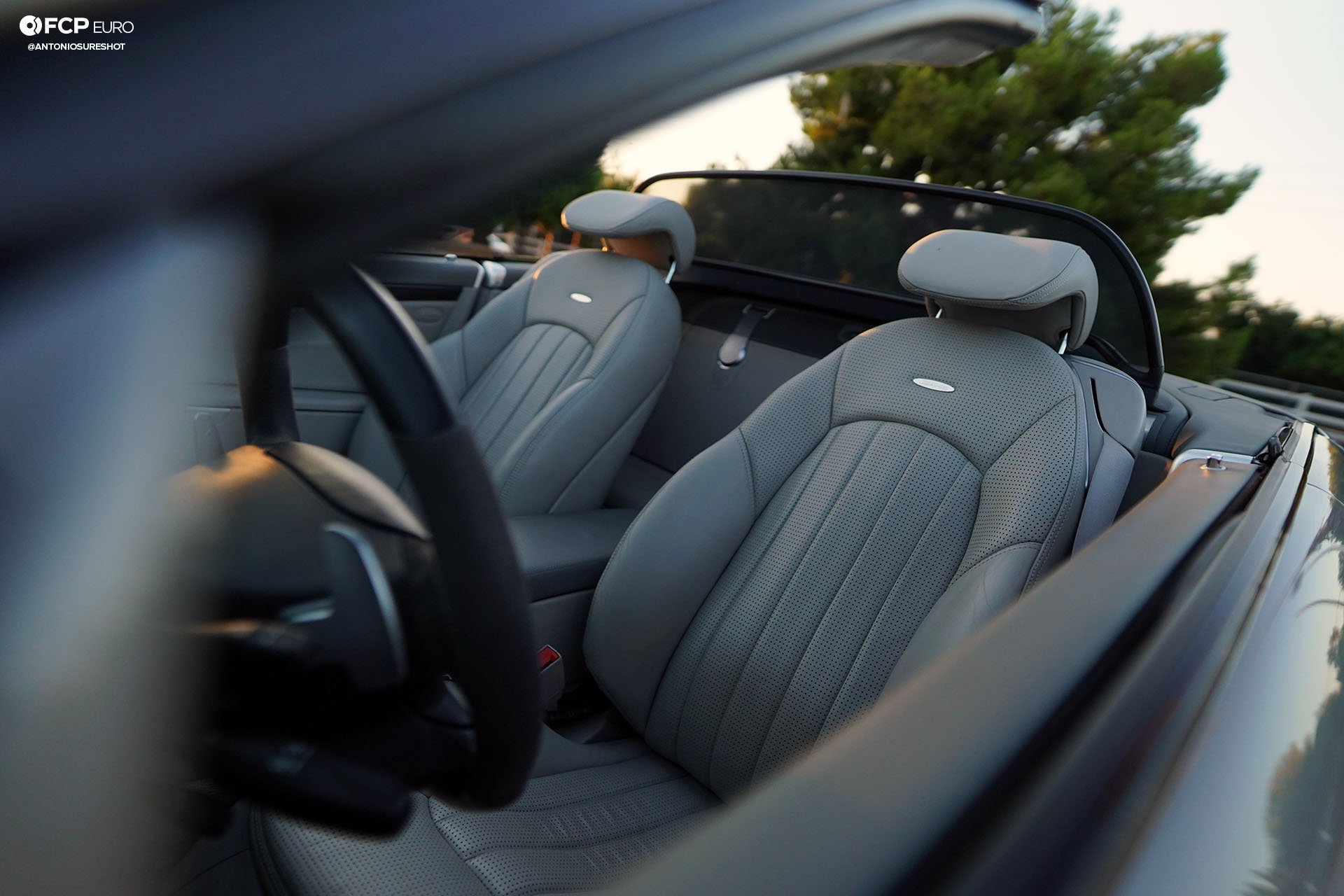 The seats don’t work like they do from the factory. With factory seats, when you push the memory return button with the factory programming, you must keep the button held all the way until the seat is done moving. Deino’s return with a simple push. The windows all go down with a single push, too, where the original Mercedes programming required you to push once for the front windows to automatically go down then push again and hold it down for the rear quarter windows.

Even the hardtop is programmed differently and, originally, you had to be at a stop for it to open or close and hold the switch until it was done. Now, he can do either up to 35-MPH with a single touch as well as one touch again to open or close all four windows. When you use the key fob to close the top, his SL55 will keep the windows open until he touches it again to close everything up. This is all thanks to the SmartTop Module and its ability to be custom programmed to how you want the interior to work. 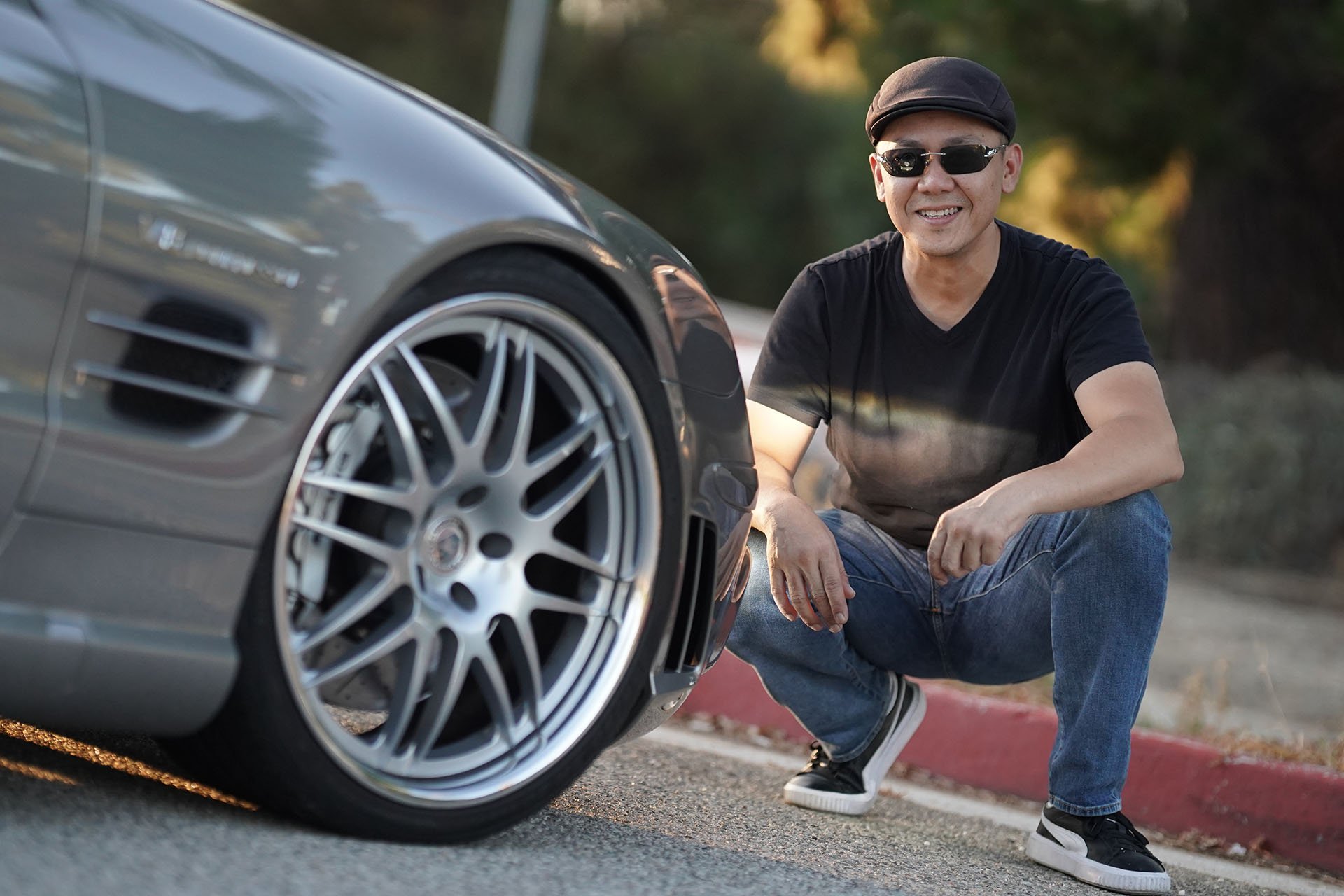 It’s hard to call any car a sleeper when it’s a factory performance car like AMG and especially so when it’s the 030 Performance Package like Deino’s. However, many people look at him and his car and think that it’s just a stock AMG. Even just to ride in it you wouldn’t know it was as powerful and well setup as it is with its East Coast Euro motor and transmission polyurethane mounts. It doesn’t rattle, it doesn’t smell, and the exhaust note isn’t far off from factory.

Both have a very unassuming nature to them. The exhaust betrays the beast lurking under that hood. After one sight of it working its anti-squat control and the Wavetrac LSD giving the rear tires the power they need to keep the tire’s bite going, they learn quickly. 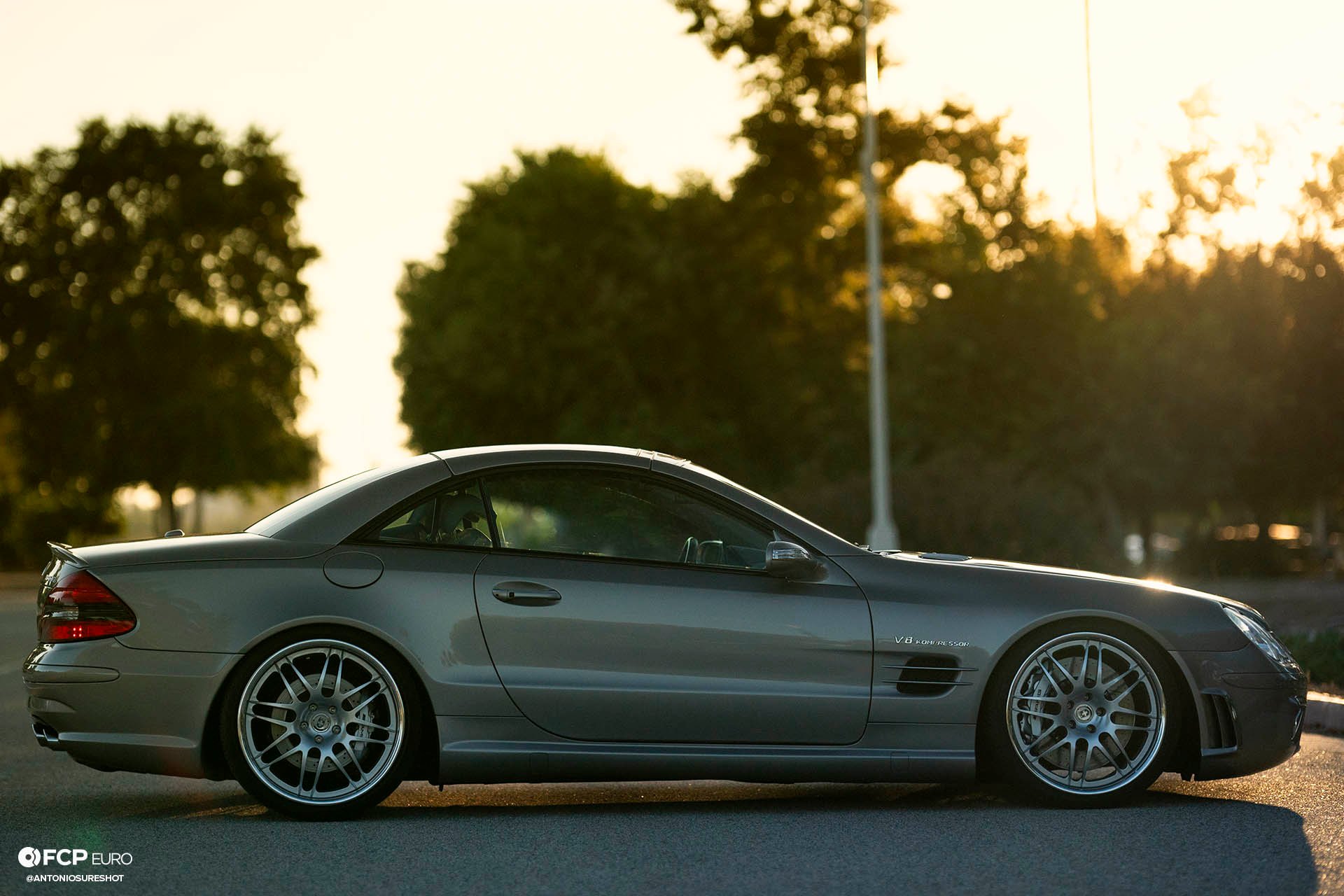 Again, sleeper gets thrown around like water in the ocean. The word doesn’t quite have the meaning it once did. We’d still argue that this is a sleeper by the original definition. Even though it is an AMG 030 version of the SL55, it still looks, feels, and even closely sounds like nothing has been done to it. It’s only when Deino Dao puts his right foot down do you realize just how special this car is and how badly you misjudged it by its appearance.

Isn’t that the very definition of “sleeper car?”

If you like this Mercedes-Benz AMG SL55, you can find additional Mercedes-Benz content at mercedes.fcpeuro.com, as well as more build features like this one here. If there's anything specific you would like to see, or if you have any questions/comments, leave them in the comments section below.