The FCP Euro motorsport team is in sunny Sonoma, California for rounds seven and eight of the TC America Championship. A new circuit for the FCP Euro crew, Sonoma Raceway provides breathtaking terrain and, of course, the associated challenges with a unfamiliar and unique circuit.

Sonoma Raceway is located roughly an hour north of San Francisco. Mountains, cliffs, and rolling hills all converge on the San Pablo Bay, making for scenic vistas and an almost exaggerated landscape. The circuit itself is carved directly into that very same landscape, creating one of the most picturesque and roller coaster-like tracks in the country. If you travel to one corner of the track, the elevation change is so extreme that you can see the entirety of the 2.5-mile course all from one spot. As a reference, there's a full 16-stories of elevation change from the highest point of the track to the lowest. Sixteen!

Wednesday load-in was unlike any others we have encountered so far this season. For starters, in somewhat-traditional California fashion, we sat in almost two hours of traffic getting to the track. Just four miles out from Sonoma, it took the team well over an hour to creep down the road at a snail's pace (pic below). There wasn't an accident, there wasn't an issue up ahead, just...traffic. It was this moment we all realized that everything we do–whether it's running out to the store, or getting dinner or even grabbing a last-minute part (you never know what can happen on race day)–has to be planned around the daily gridlock. 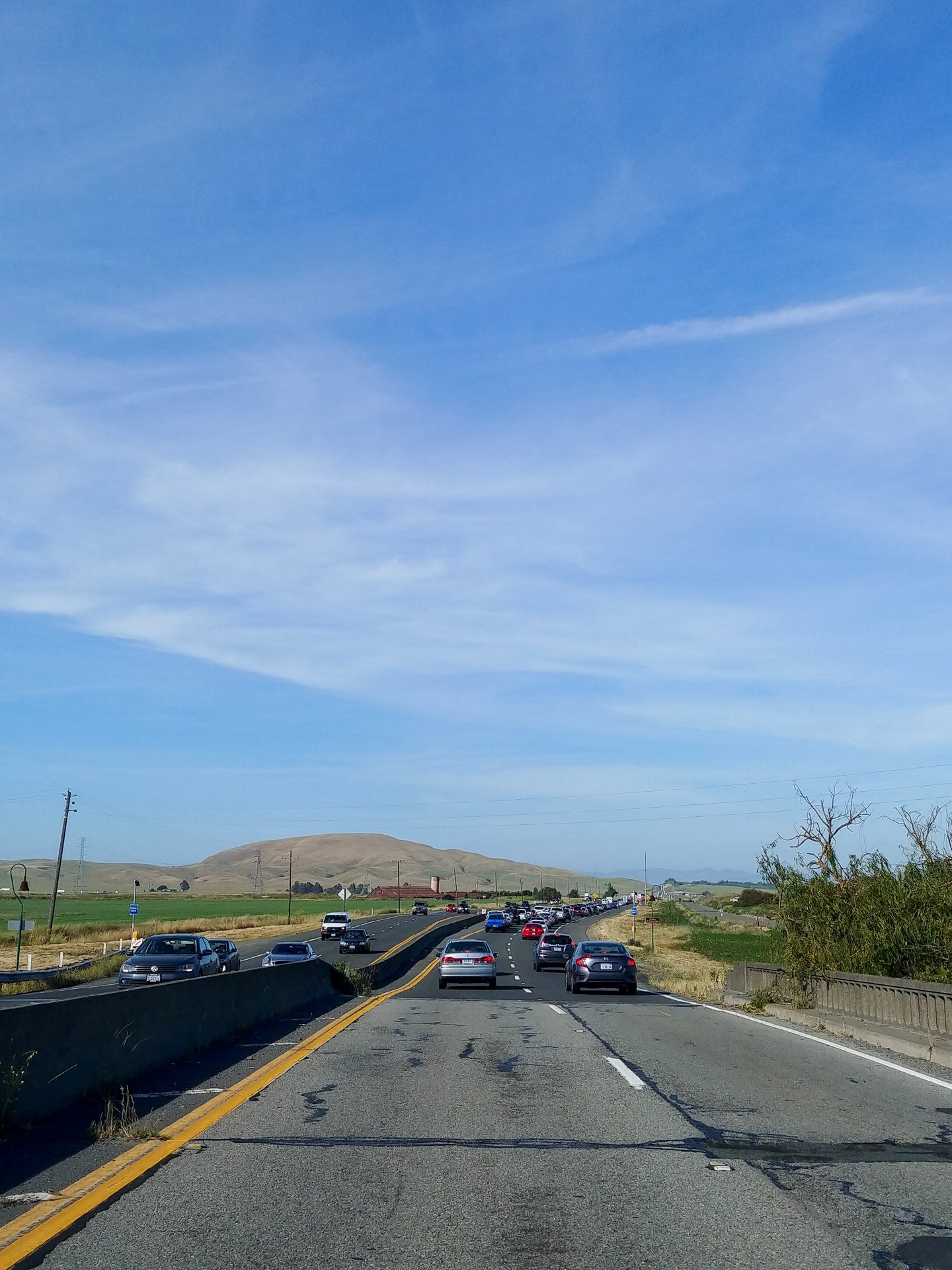 When we finally arrived at the track, load-in was delayed as well. Due to a track day that wrapped up late, half of the teams had to stage in a gravel lot up above the track, unable to begin the setup process for at least a few hours after arriving. Once allowed, The FCP Euro team along with the HRD team started the unload and setup process. The process went smoothly and quickly while trying to make up lost time—the only opposing force was the wind, which, unfortunately, still hasn't let up. Tent tie downs are key in situations like these.

During load-in, our drivers and a few members of the HRD crew went for a track walk. Track walks are imperative, as the subtle nuances are usually where you can make up (or lose) the most time, or where you could easily get into trouble. Understanding as much about the track as you can, and memorizing it is crucial to being competitive. During this time, myself and Ethan Roy, one of our Video Producers, went on our own track walk to shoot some b-roll for upcoming "The Paddock" episodes, as well as familiarize ourselves with the layout. Immediately, we noticed just how extreme the elevation changes are and how violent some of the sections of the track can be. Michael Roselli, our Content Director, somehow ran two laps of the track. Safe to say, he slept good that night.

Going back to how extreme the terrain is here, typically when attending a race weekend, the track rents out golf carts. At Sonoma, they rent you side-by-side ATVs instead. These make life one-hundred-percent easier as it would be near impossible to cover the track in its entirety without them. 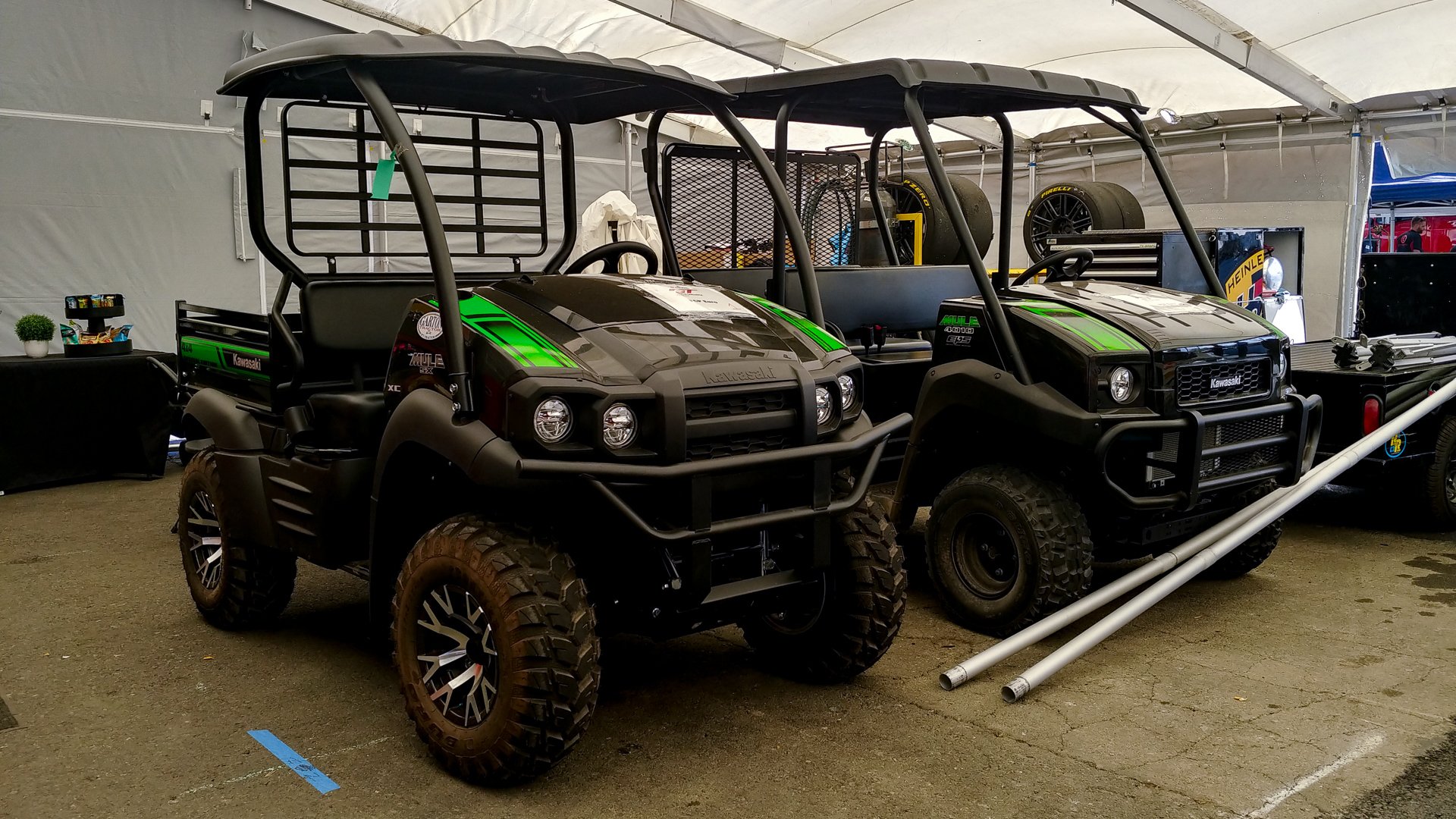 The last part of load-in and one significant one is our booth with the vendor displays. Nathan Brown, our Event Director, Andrew Johnson, one of our Catalog Associates, and Raul Ortiz, one of our DC Associates, worked on getting the truck unloaded and all of the supplies organized before the chaos (the good kind) of a race weekend ensued.

Most of the team wrapped up around 10:30 PM to head back to the AirBnB and start all over again in the morning. 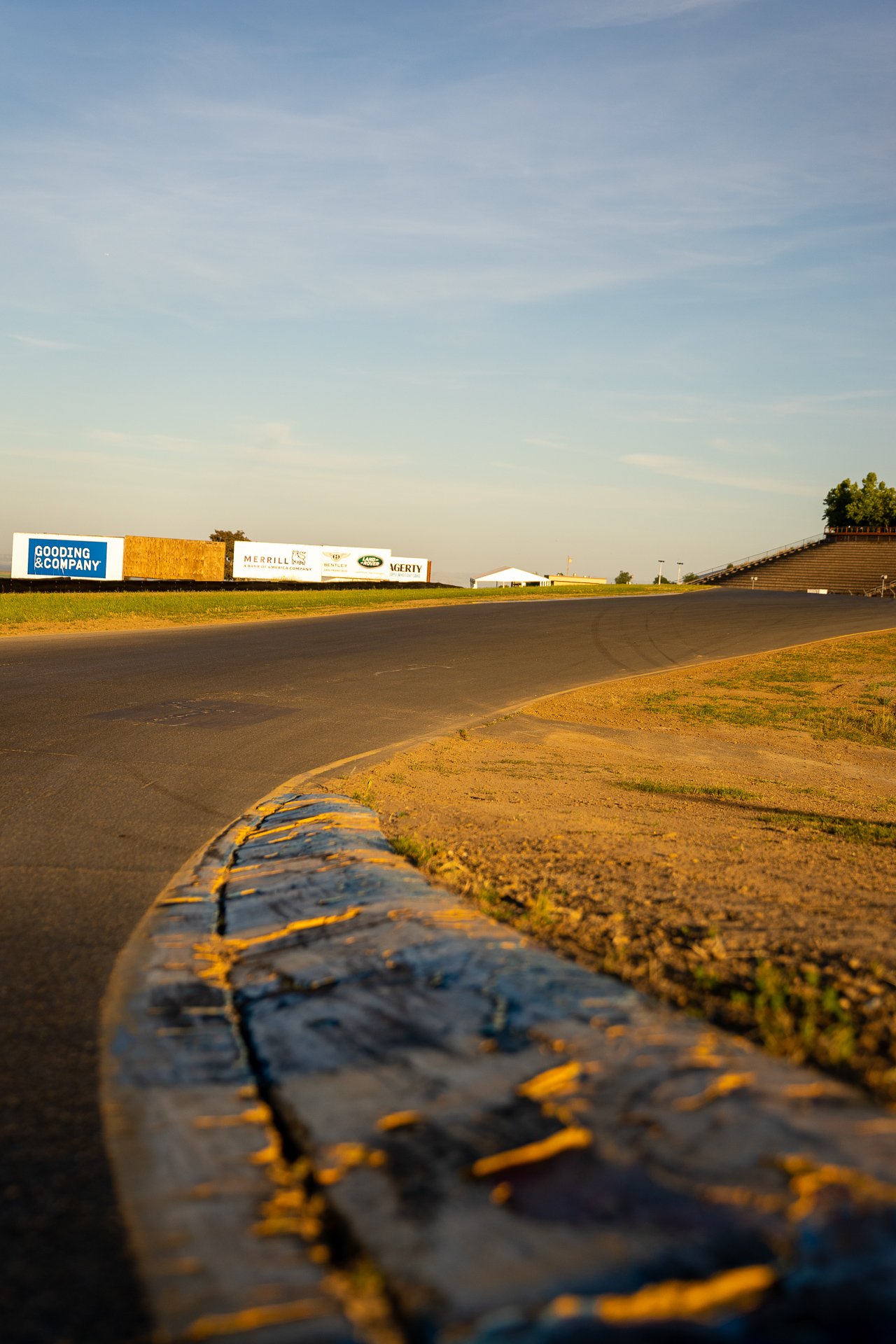 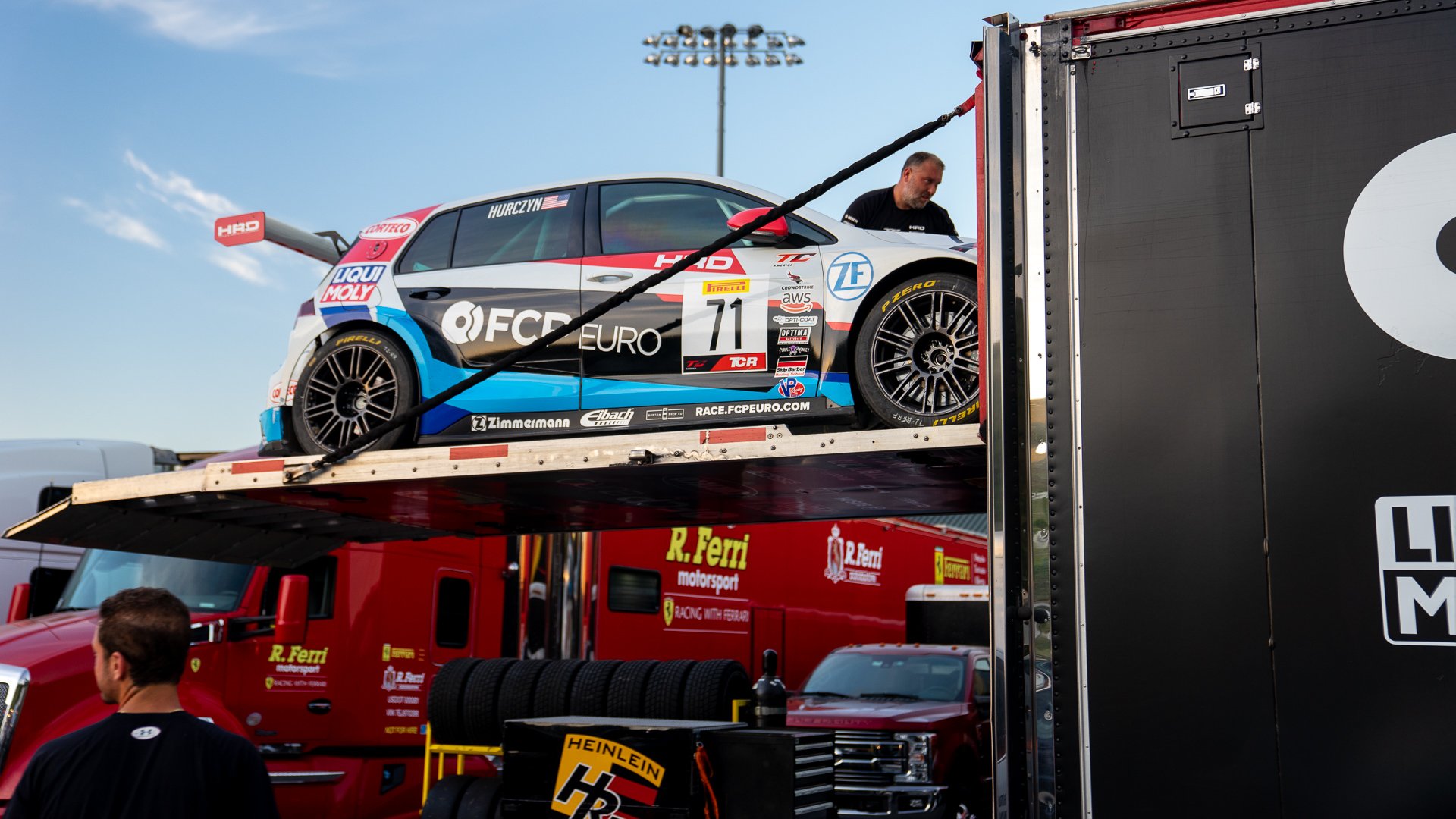 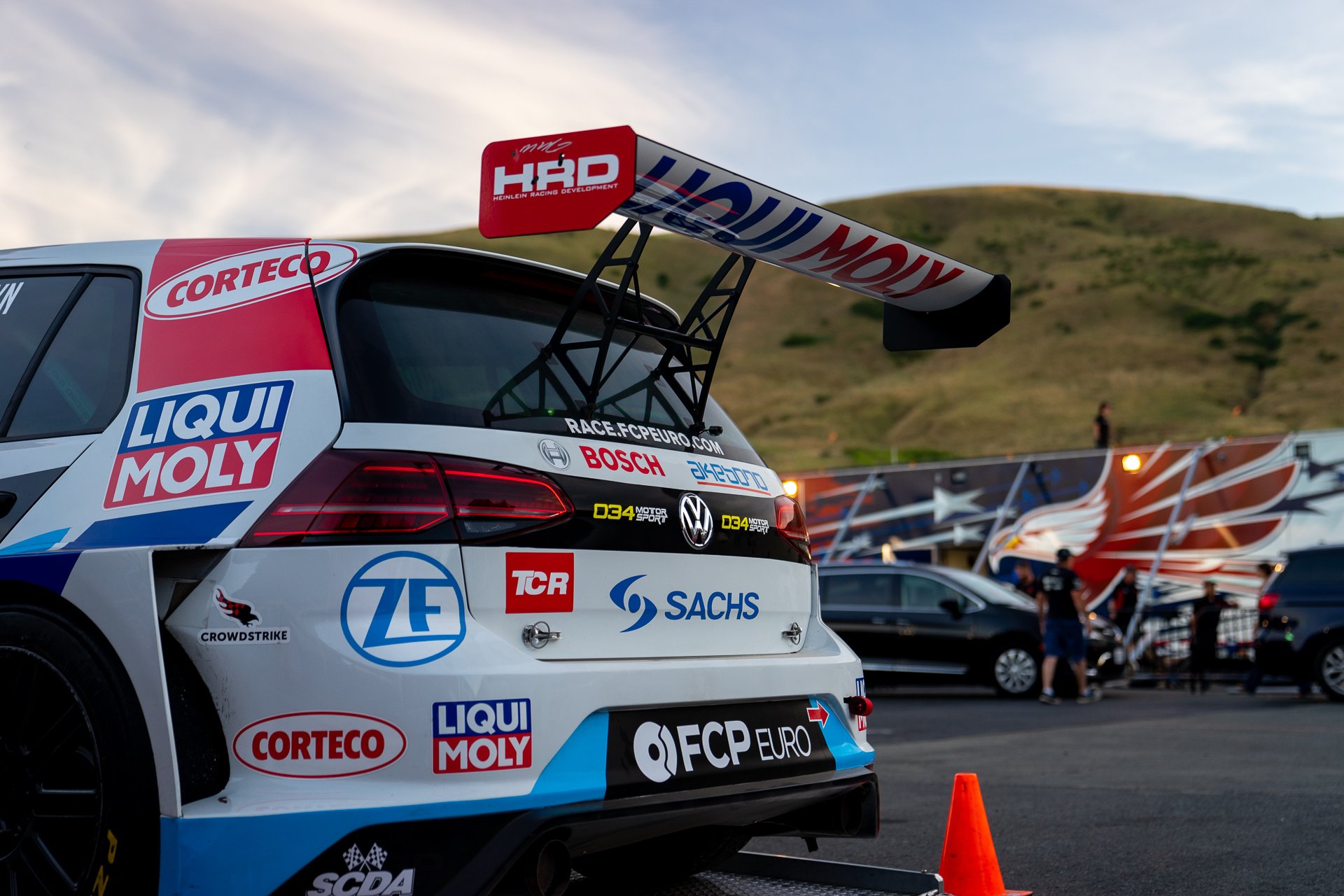 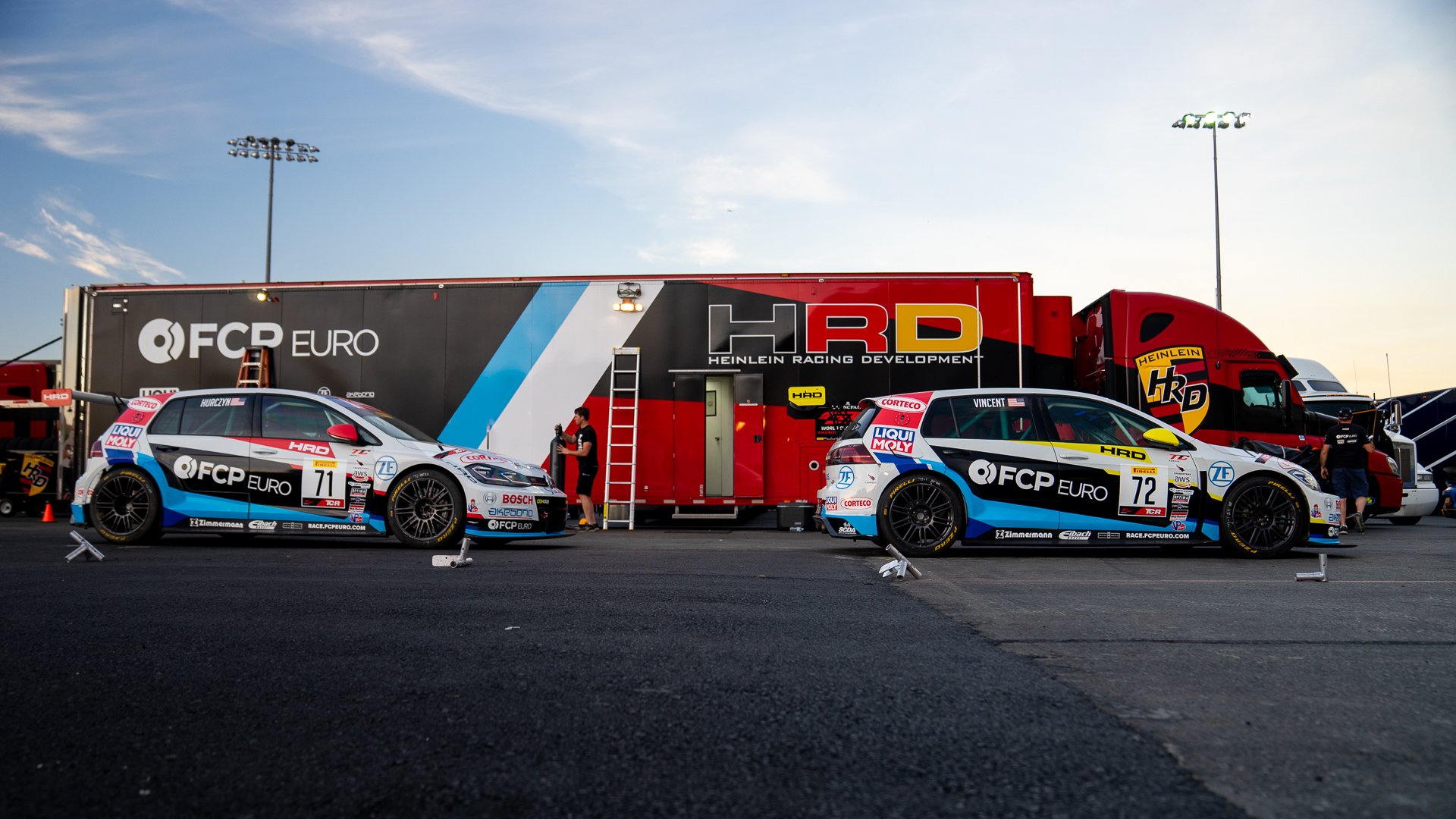 Thursday started off a little more relaxed after having completed the majority of the work; this was when the team fragmented, splitting off into their specific roles. HRD and Gareth Foley, our BMW Catalog Manager/Race Mechanic, started dialing in the initial alignment setups on the cars. Being at GRIDLIFE last week and giving over 120 spectator ride-alongs took its toll on the car's alignment. Also, being a very different track than the ones we've been at previous means the cars need very different settings. 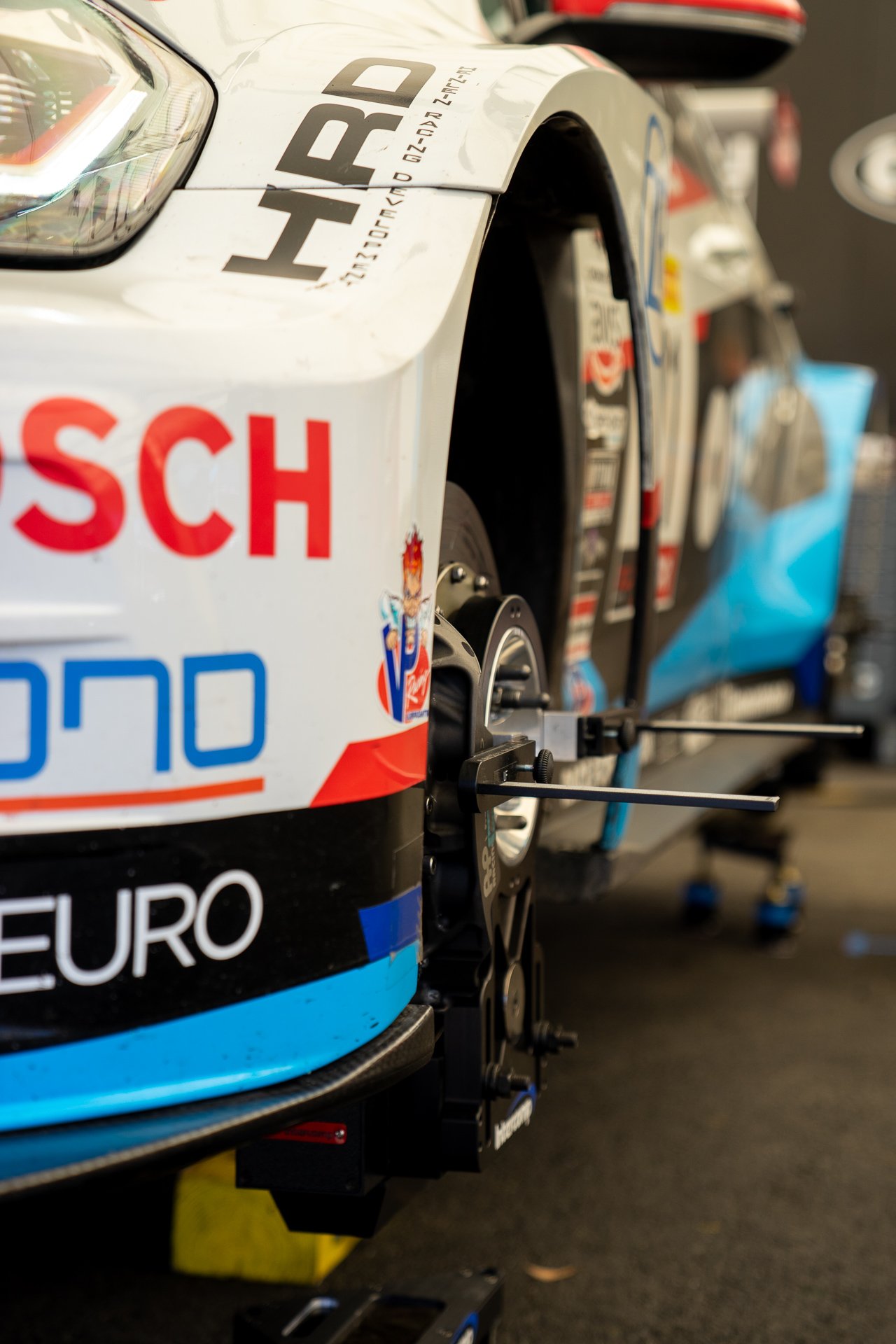 Mentioned above, Sonoma Raceway is incredibly technical with a lot of nuances. Elevation changes, crests, and long carousel-esque corners challenge both the cars and drivers. Even the track surface itself has various levels of grip, bumps, and cracks across its entirety. 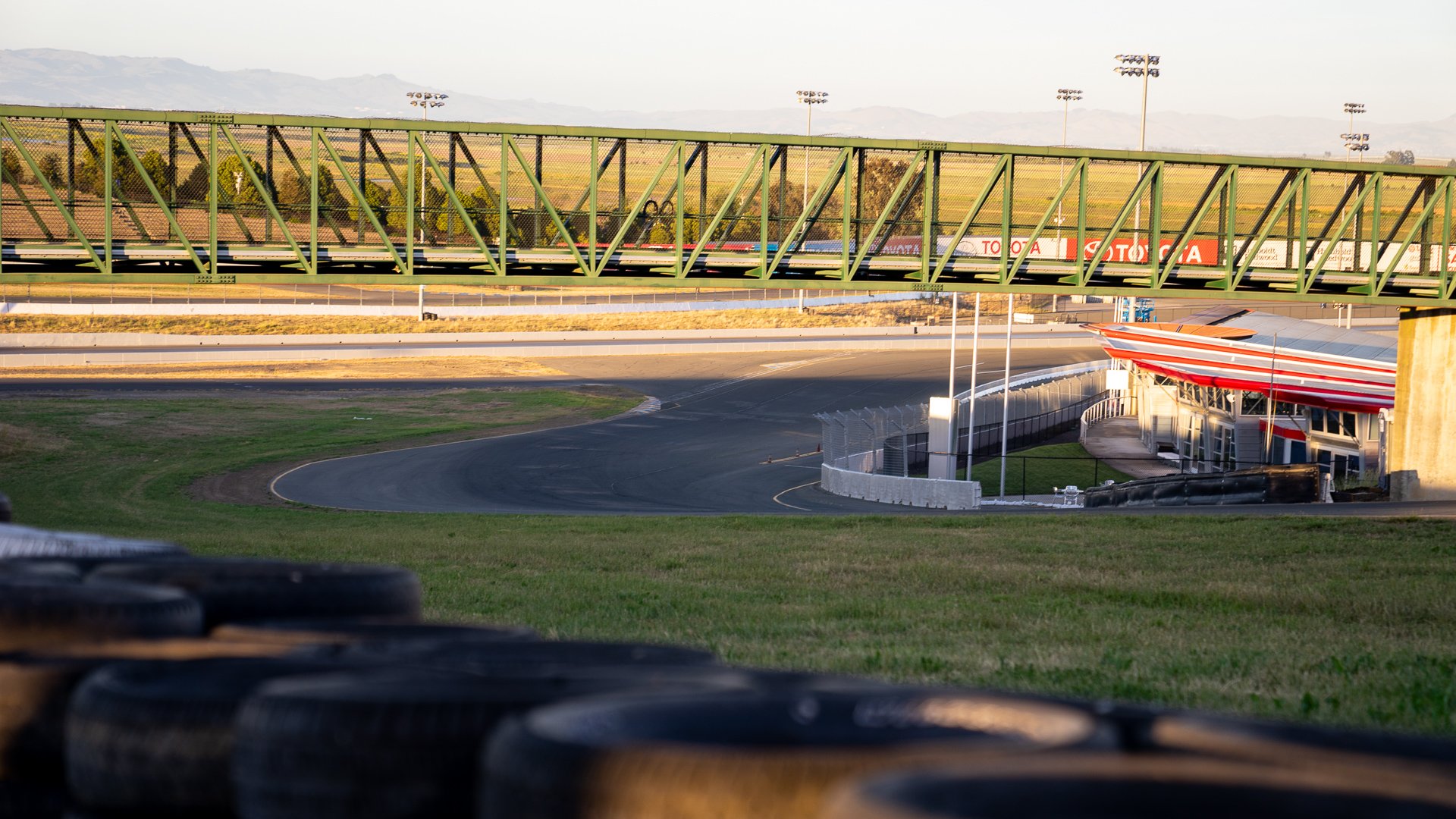 Once the cars were set up, it was time to hit the grid and go out for the first practice session of the day. Michael Hurczyn, driver of the #71 car, and Nate Vincent, driver of the #72 car both had their work cut out for them. Neither has driven a car around Sonoma Raceway, let alone the VW GTI TCRs. Such a long, technical track requires coming up to speed as fast as you can. Only having four practice sessions before race one, it was vital for them to make the most of each session. 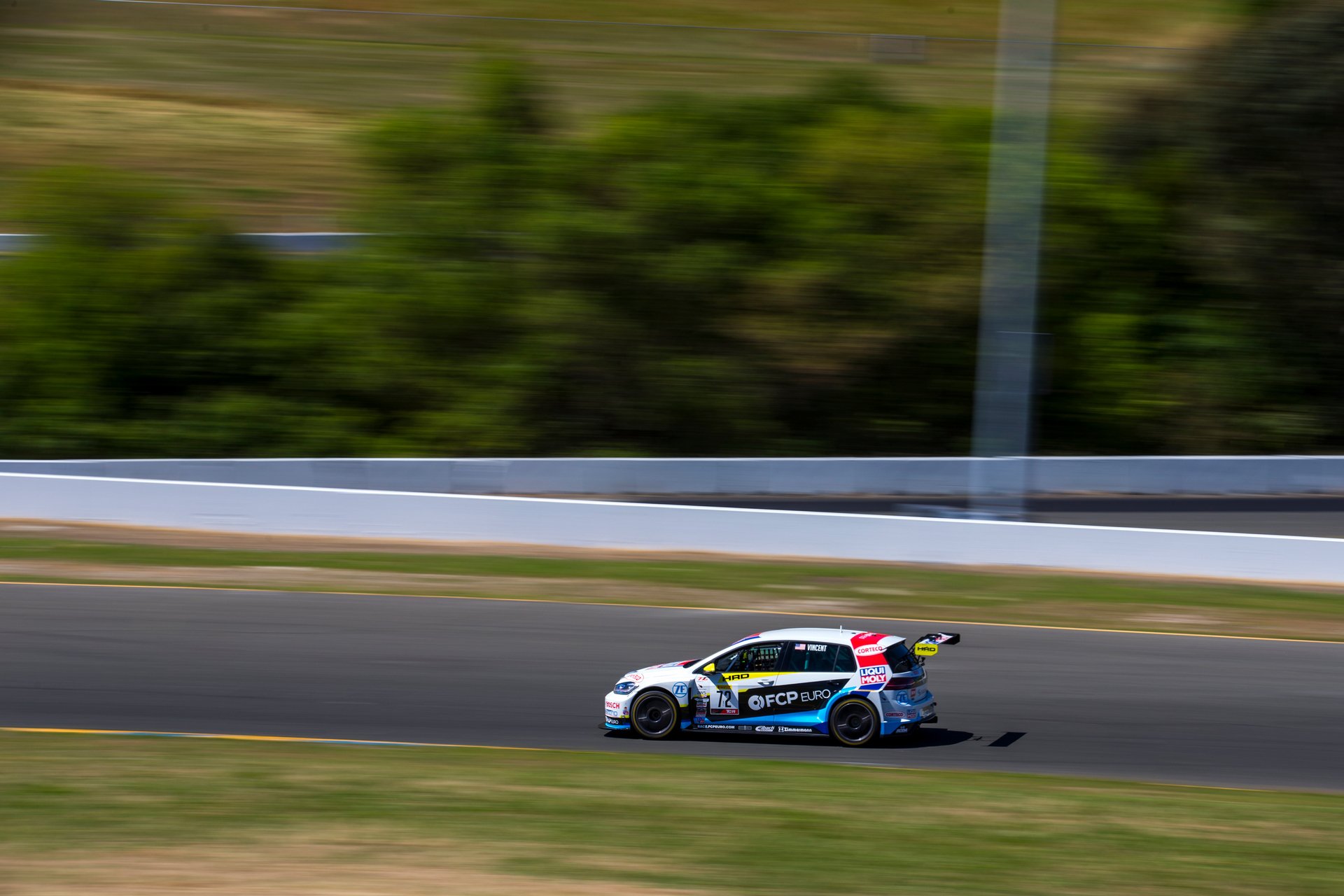 During the first session, elevation and downhill braking zones were getting the best of both of the TCRs brakes. Both drivers commented on how soft the brakes became fairly quickly, which is pretty much the opposite of confidence-inspiring. Immediately after coming back into the paddock at the end of the session, HRD had the cars up in the air. Gareth went through the brakes while other members of the crew made some more alignment tweaks. In the photo two below, you can see the new alignment blocks in use. These expedite the process and offer an incredible amount of precision. 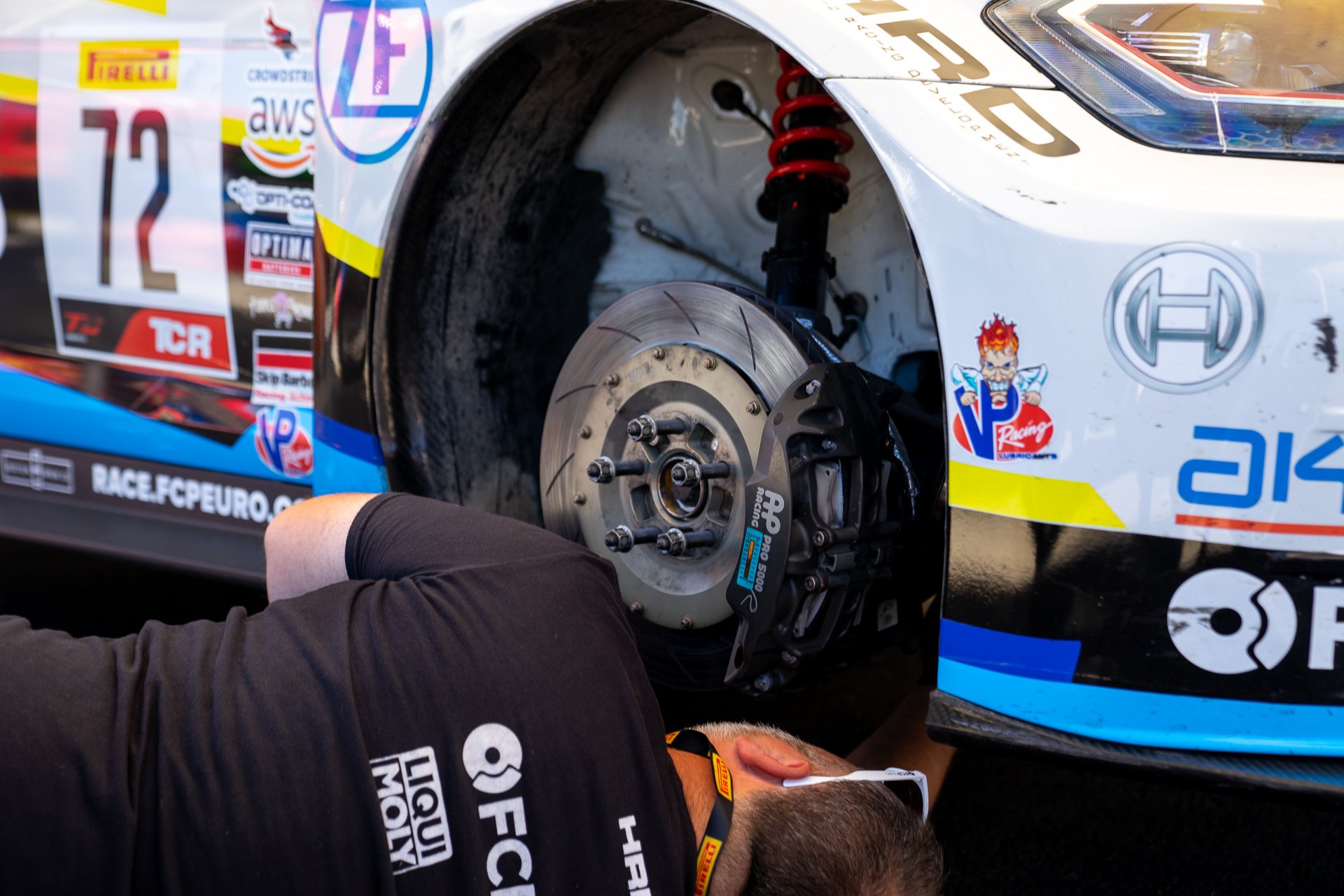 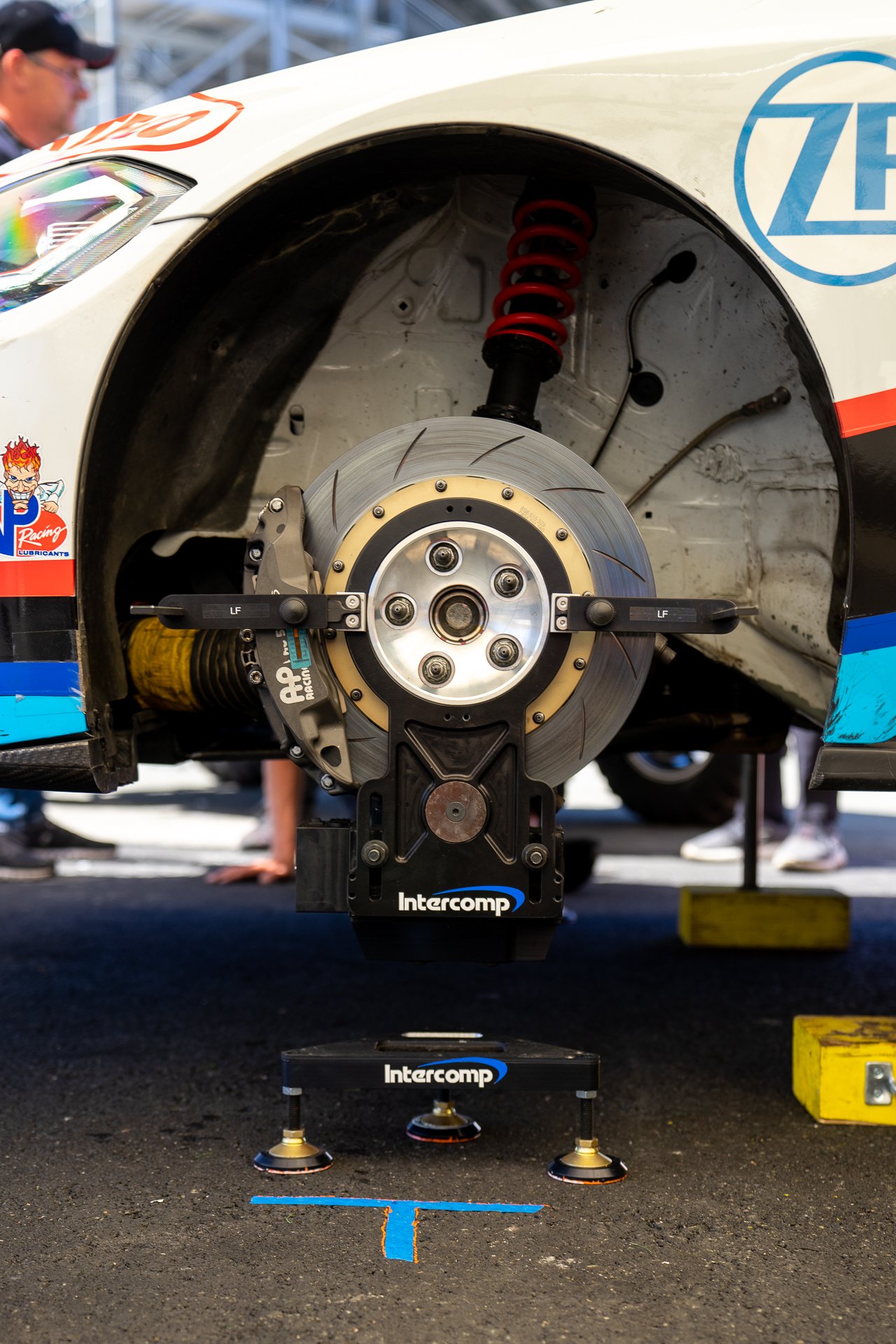 The morning raced by, and before we knew it, it was the afternoon. Gareth Foley and the HRD crew worked non-stop to have the cars ready for the ride-alongs and the upcoming practice session taking place immediately afterwards. With only a few members of the local media around for rides, Nate and Michael were able to give members of our team rides; this worked out well as additional practice time. I was able to go out, and all I can say is that wheel-to-wheel racing here will be unlike any other track I've been on. There are numerous blind sections of the track that are technical at the same time. I can only imagine what going through them at 100MPH bumper-to-bumper will be like. 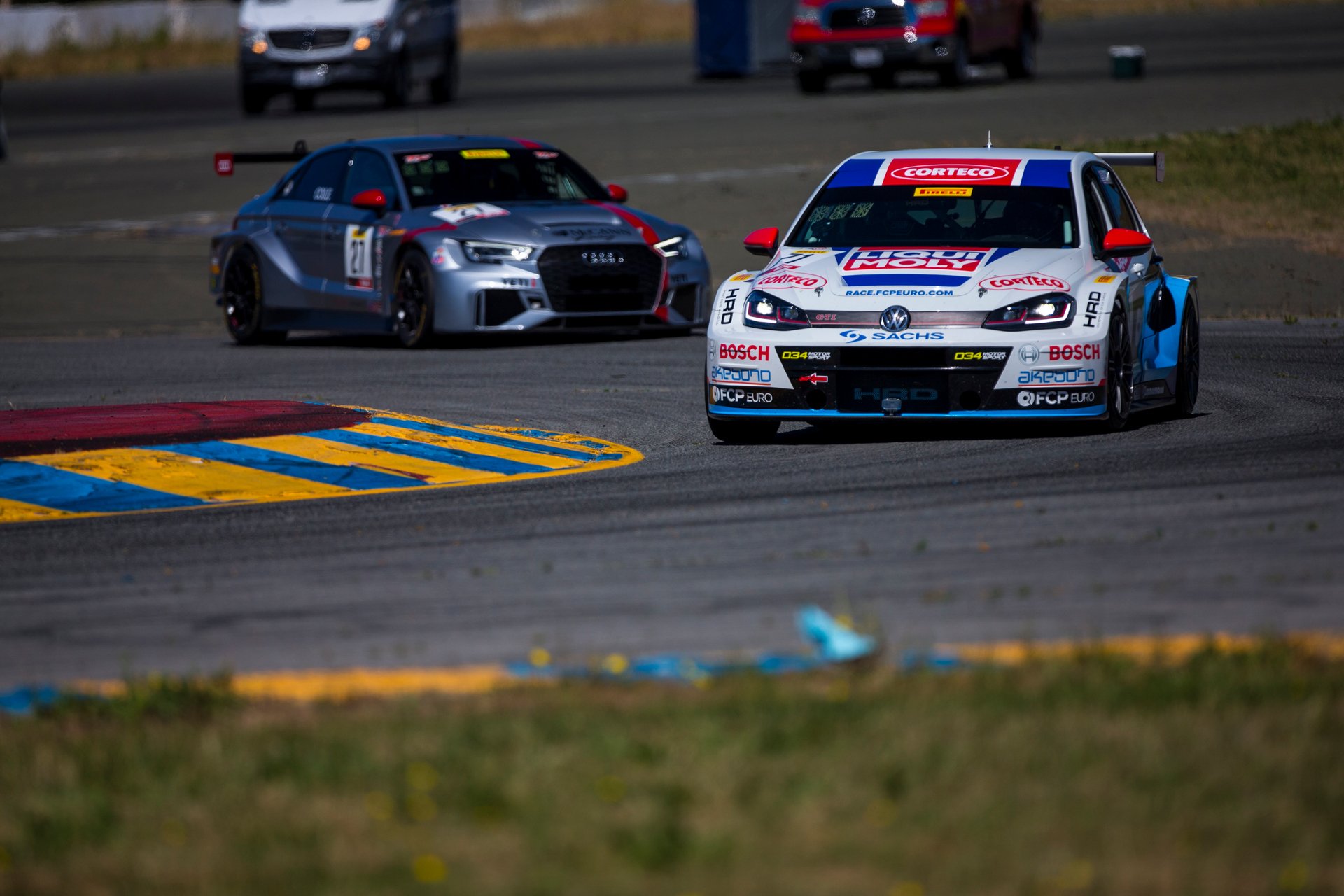 Practice session two came to a close, but we couldn't leave for the day just yet–the annual SRO photo shoot was taking place at dusk with every single car in the field. This provides the one and only opportunity to photograph them all, together, for marketing and promotional materials. The photo below is just a snapshot of the TCR/TC field, as we couldn't actually stand near the corner of the straightaway as we'd be in frame of the series photographer's shot. 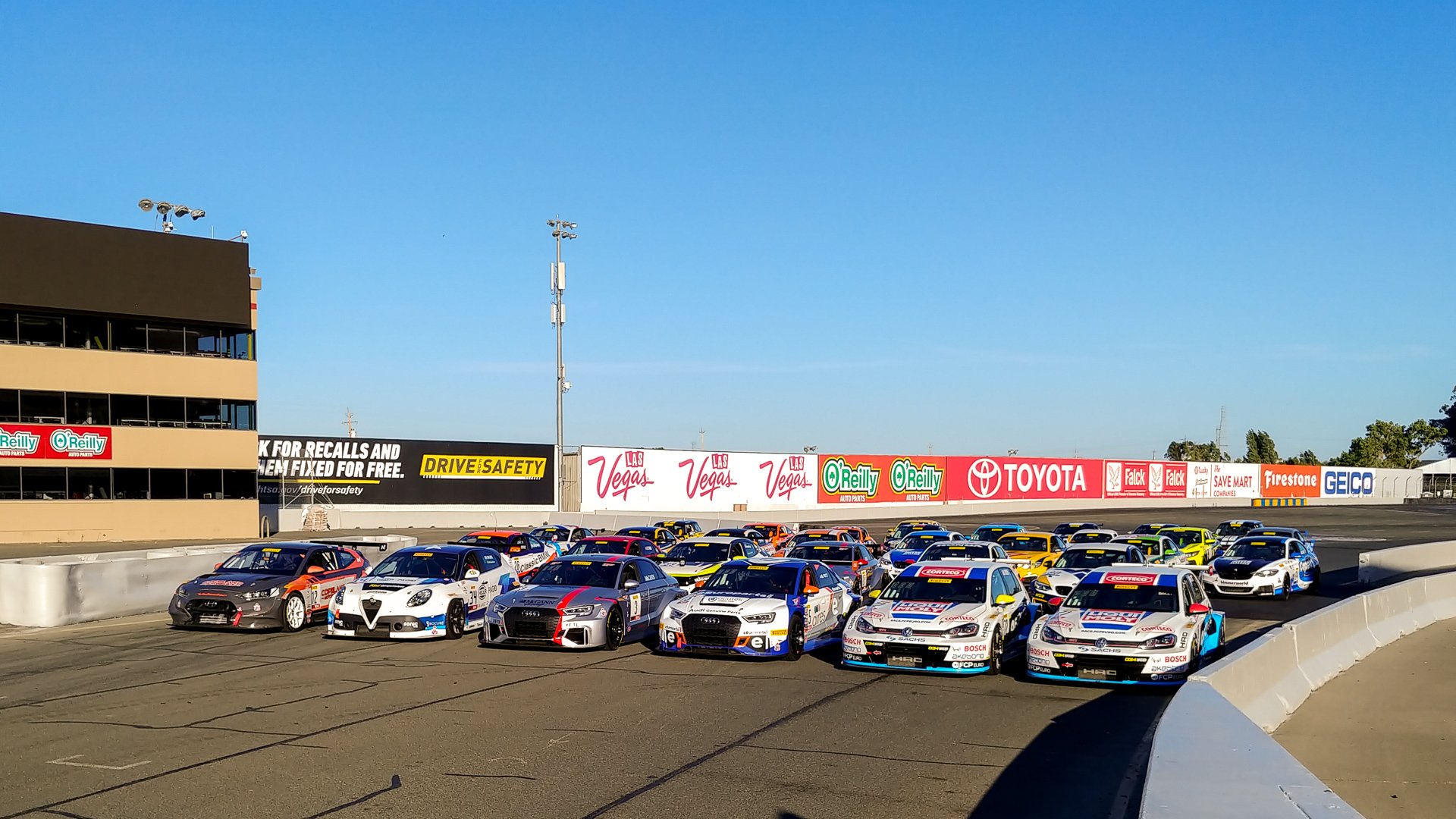 Immediately following the photoshoot, Gareth and HRD had the cars back under the awning, fueled up, sticky tires on, and ready for the morning ahead. 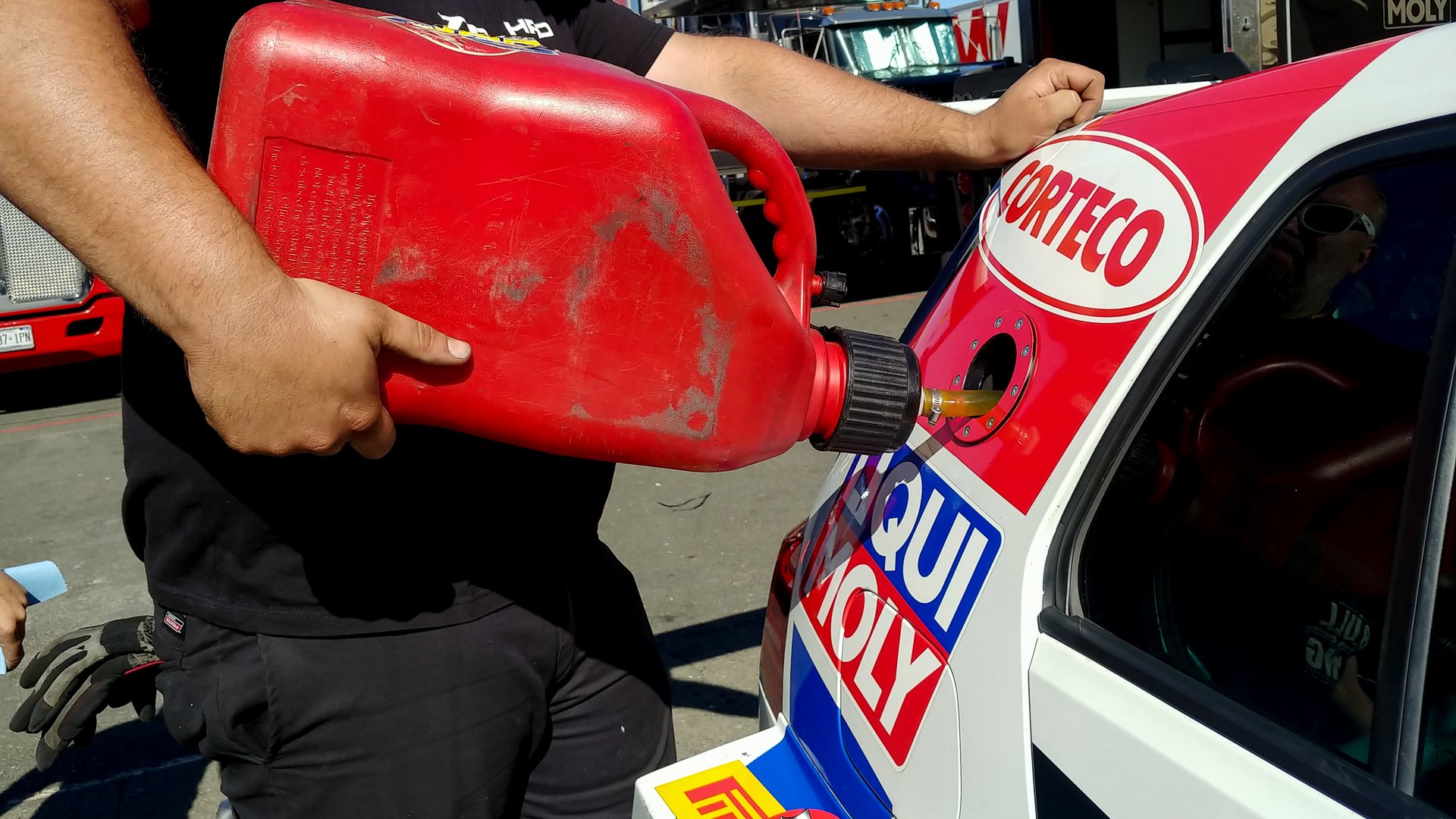 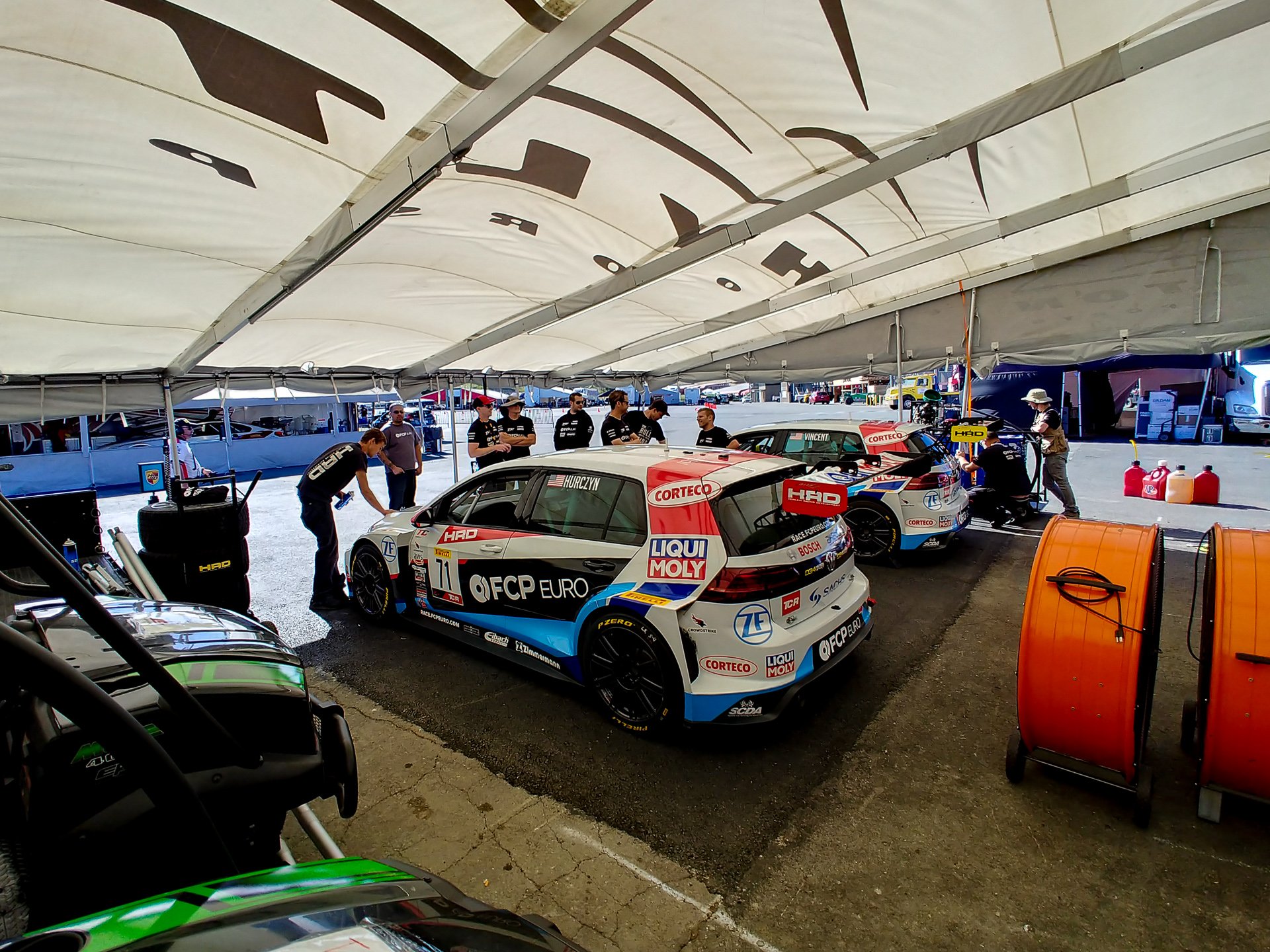