When it comes time to purchase a replacement part for your older European vehicle, such as the Mercedes-Benz W123 models that will be discussed here, there often isn't much of a decision making process involved.

If you need suspension components, there are usually high quality and reasonably priced aftermarket parts available from manufacturers like Lemforder. Brake job needed? You can easily get your hands on parts that are made by the original equipment manufacturer, such as ATE, directly rather than paying the big bucks for "Genuine" parts. In some cases, like when dealing with your car's automatic climate control, only rebuilt parts are available - no one makes the parts new anymore. And in still other cases, like certain window seals, specialty bolts, etc. the only option is the dealer's parts counter.

On the other hand there are a few parts on these older cars where there are almost too many options, each with their upsides and downsides!

Just one such part is the rear axle on the W123 models made by Mercedes from 1977 through 1985. Brand new axles are still available from the original OEM manufacturer, and of course you can find inexpensive aftermarket copies, however these axles are so well built from the factory that markets have popped up for re-builders and DIY'ers have gotten in to rebuilding them as well. Additionally, some have taken to pulling them from parts cars or the salvage yard and installing those still good used parts in place of their failed axles. All of these can be valid options depending on your budget, the condition of the rest of the vehicle, and your long term goals.

With all of that in mind, lets look at those very options in more detail so you can approach this decision making process with some insight! While Mercedes-Benz no longer offers "Genuine" axles, you can still get brand new axles built just like they were back in the heyday of the W123 by purchasing them from the OEM manufacturer, a company called GKN.

Upside: These are going to be the highest quality replacement part for your axles as one can find. If you plan to keep your car for many years to come, and it is in overall good condition and likely to hold or increase its value as it ages, then installing brand new axles from GKN might be your best option.

Downside: Price, period. A pair of axles will cost you well north of $1,000. That said, if you purchase them from FCPEuro you will be backed by a lifetime guarantee - they will be the last axles you'll ever buy for your car!

As with most parts on older cars, the aftermarket is flush with choices. You can even get brand new aftermarket axles on Amazon.

Upside: Price. Some are available as low as $95! Aftermarket axles are going to be, by far, the least expensive new part option. Otherwise, one upside of certain aftermarket axles is they are built in the more modern homokenetic style (pictured above). This design allows the axle to be unbolted from an input shaft which is permanently installed in the rear differential. This allows the axle to be replaced without having to open the rear differential.

Downside: If you have been in the DIY community for very long you have likely seen too many examples of aftermarket axles that are noisy right out of the box, that begin to leak grease/oil shortly after install, or that have fitment issues. While the price may be tempting, are they are worth the gamble? But hey, at least with the homokenetic style they are easy to swap out often!

The original axles installed in older Mercedes were very robust, well designed, and long lived. The most common failure is that, with age, the rubber boots protecting the joints split. If caught early enough, before damage is done, the axles can be rebuilt. There are many suppliers that rebuild these axles, often available through your local auto parts store. Others are online only dealers.

Upside: Price, at least compared to new OEM. Rebuilding old parts saves the company doing the work a lot versus building new parts. In addition, the rebuild is using the same, durable parts installed on the car at the factory and just refreshing the rubber boots, grease, and maybe replacing the ball bearings.

Downside: First, there is usually a core charge. If your old axles are badly damaged the rebuilder may not take them as a core replacement, meaning you're out that money. Even if they are eligible for cores, you'll be out the core charge for a while as you wait for it to get refunded. Additionally, as with any rebuilt part, quality varies greatly between rebuilders. Rebuilt axles from your local auto parts store are more likely to have quality control issues.

Pictured below is a rebuilt axle from CVJ Axles, the author's personal favorite rebuilder, next to an axle that was just removed from a car due to a torn boot. The old axle will be sent back as a core to be rebuilt and used again another day. 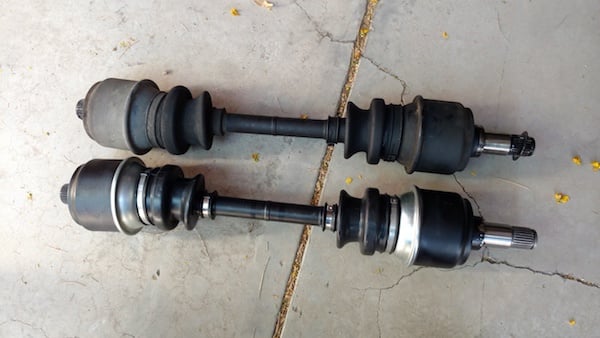 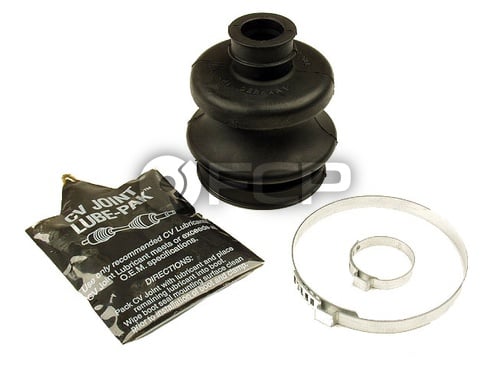 Given the nature of the durability of these old axles, it stands to reason that some DIY'ers would want to undertake the effort of rebuilding their own axles. It can save some money, and be an interesting learning experience.

Upside: The parts are definitely inexpensive. You can get the inner and outer boot kits together for less than $50 here at FCPEuro.

Downside: Lots of hard and greasy work, as well as the need for some special tools like a hydraulic press to separate one of the joints, and a crimp tool to properly seal the can on the outer end. Due to this, doing your own rebuild will be more of a project of interest and passion than one of practicality.

These axles have been shown to last 300, 400, or 500,000 miles as long as the rubber boots stay intact to keep dirt and moisture out of the joint. As such, some DIY'ers have taken to pulling axles with intact boots from parts cars or from the salvage yard.

Upside: Price, more than any other option, as this may be the cheapest option of all. A salvage yard in Tucson, where the author lives, lists axle shafts at only $30/ea.

Downside: Labor, since you'll be pulling axles several times over to first get the used part and then to pull and replace the axles on your car. Also, as is the nature of any used wear part, you will not be able to gauge how long the used part will last. The rubber boot could split in a few years, or it could split next month, leaving you back where you started.

With those options laid out, you can go forward in to the murky sea of axle options with the power of knowledge! Feel free to share your experience with any of these options in the comments.

Nicolas lives in Tucson, AZ where he spends his weekdays as an emergency manager, and his weekends working on cars, either his or his friend's. He has a passion for old cars, which he indulges through the classic W123 Mercedes-Benz, and for fast cars, currently an E39 540i M-sport.