Despite their understated design, it’s still easy to spot an Audi in a crowd - just look for the four interlocking rings displayed prominently on the grille. This simple, unadorned logo is as synonymous with the brand as the three-pointed star is with another certain German automaker.

Some might think the four rings may have something to do with Audi’s penchant for all-wheel drive. Others might surmise it has origins in obscure German history or folklore. Both would be wrong. The explanation behind Audi’s symbol is a much simpler one - but no less fascinating. To tell it properly, let’s take a step back to late nineteenth-century Germany at the dawn of the automobile age.

If one man can lay claim to kickstarting the brand we know today as Audi, it’s August Horch, born in 1868 in the West German city of Winnigen. Horch was hardly yet a teenager when the Machine Age began to take off, which no doubt fed his love for all things mechanical. After a short stint as a blacksmith’s apprentice, he began studying engineering at Mittweida Technical College.

By the time he was in his 20s Horch was armed with a degree in engineering and a talent for engine building. For the last few years of the 19th century, he worked with Karl Benz, learning all there was to know about motorcars in an era when they were still homemade novelties for the wealthy and eccentric. In 1899 Horch left Benz to work for himself. 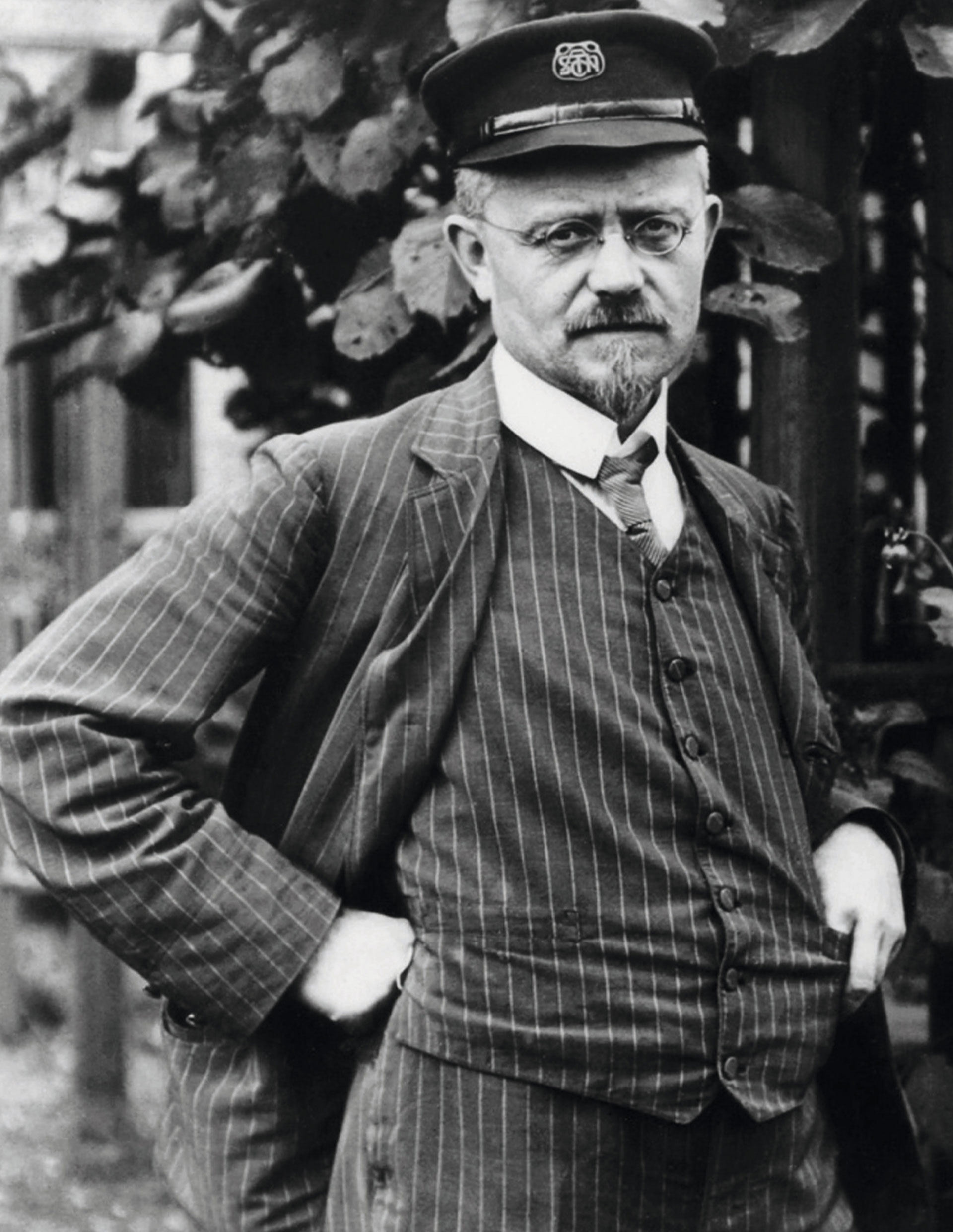 By 1902 Horch was building his own automobiles under the name of Horch & Cie Motorwerkes. Things were going well until a spat with the board of directors led Horch to leave his eponymous company to set up another venture. There was a bit of a dilemma, though: his prior company barred him from using his name for his new business. To skirt around this, the son of a business partner recommended the entrepreneur turn instead to the Latin translation of his surname. Horch took the advice, and thus in 1910 Audi was born.

As Horch was getting Audi off the ground, other engineers and entrepreneurs across Germany wanted to try their hand in the new, exciting automobile industry. Similar to the United States, numerous small outfits popped up throughout the Rhineland to give motorcar and motorbike production a go. Among these were DKW and Wanderer. 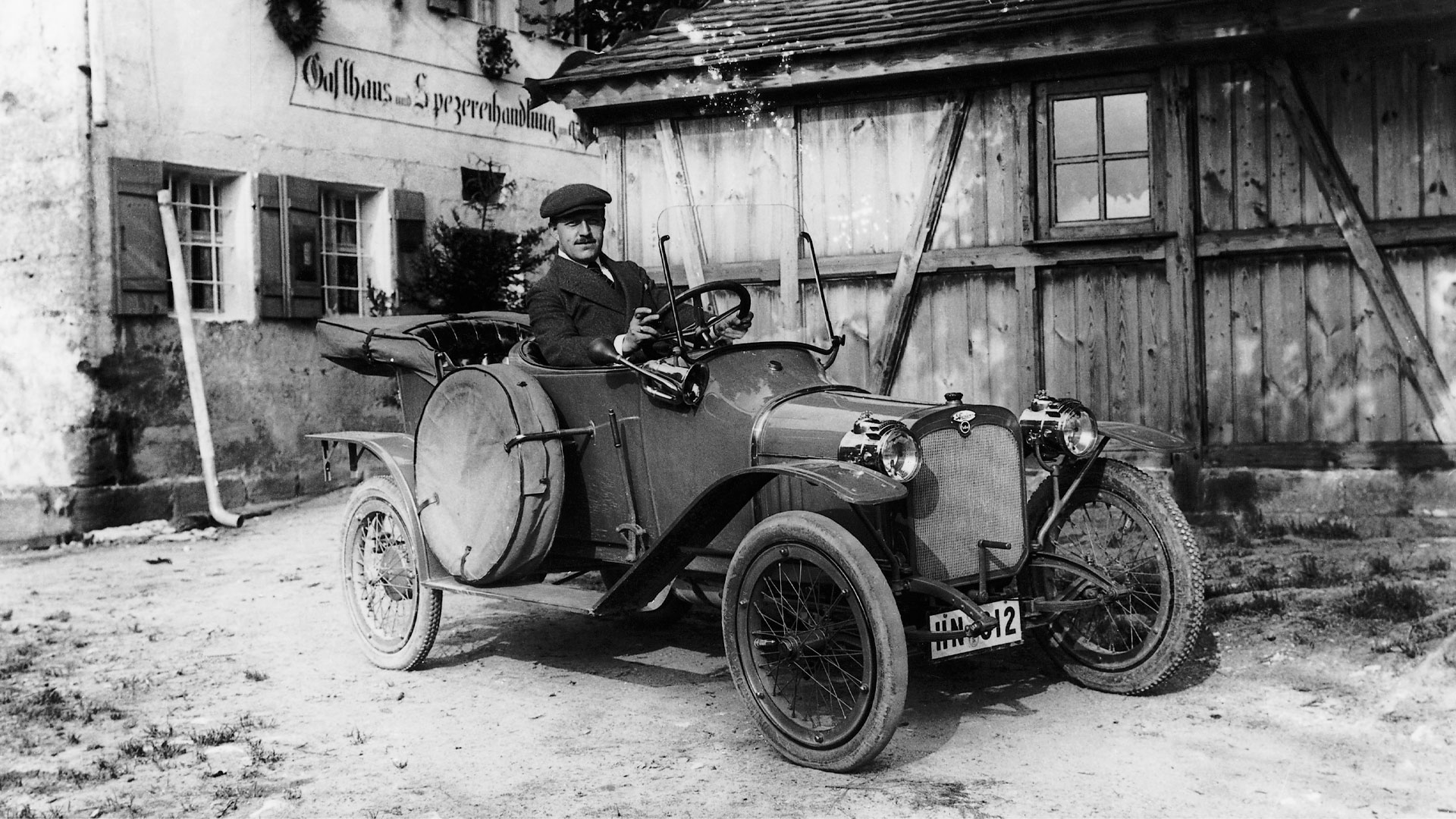 DKW was first incorporated under the name Rasmussen & Ernst in 1902. After spending its first two decades building various parts for vehicles and other machinery, the brand found what was to become its niche in building motorcycles; at one time in the 1930s, it had been one of the largest such manufacturers in the world. Car production came along in 1928 and took on a reputation for being sturdy, dependable, and affordable.

An early Horch racing car. August Horch can be seen at the far right, leaning against the car.

Wanderer can trace its roots back to a bicycle shop founded in 1885 by Johann Baptist Winklhofer and Richard Adolf Jaenicke. Within a few years, the two mechanics began manufacturing their own bicycles under the Wanderer name, and by 1896 had ventured into motorcycles. The company built its first car in 1913.

By then, tensions were high across Europe, and World War 1 had begun by the following year. After the war, Germany struggled financially with war reparations and hyperinflation. To combat the economic uncertainty, DKW spearheaded a consolidation plan among some of the more viable small, independent German automakers. The brand first acquired Audi in 1928, and the onset of the depression in 1929 led to the further acquisition of Horch and Wanderer by 1932.

An early iteration of the Auto Union logo

Like the General Motors brand portfolio, the four united companies were ordered in a hierarchy: DKW was the volume marque, Wanderer played among the mid-priced brands, and Horch and Audi were the luxury offerings. A new name, Auto Union, reflected the status of the newly conjoined brands, which together amounted to the second-largest automaker by volume in Germany at the time.

A New Logo is Born

With the four brands freshly united under the Auto Union banner, a new logo was necessary. The prevailing design was surprisingly simple and effective: each logo of the four acquired brands was encased in an individual ring. Those rings were lined up with slight overlapping, Venn-diagram style. It represented the unity and individuality of the four unique brands that now found themselves working together. 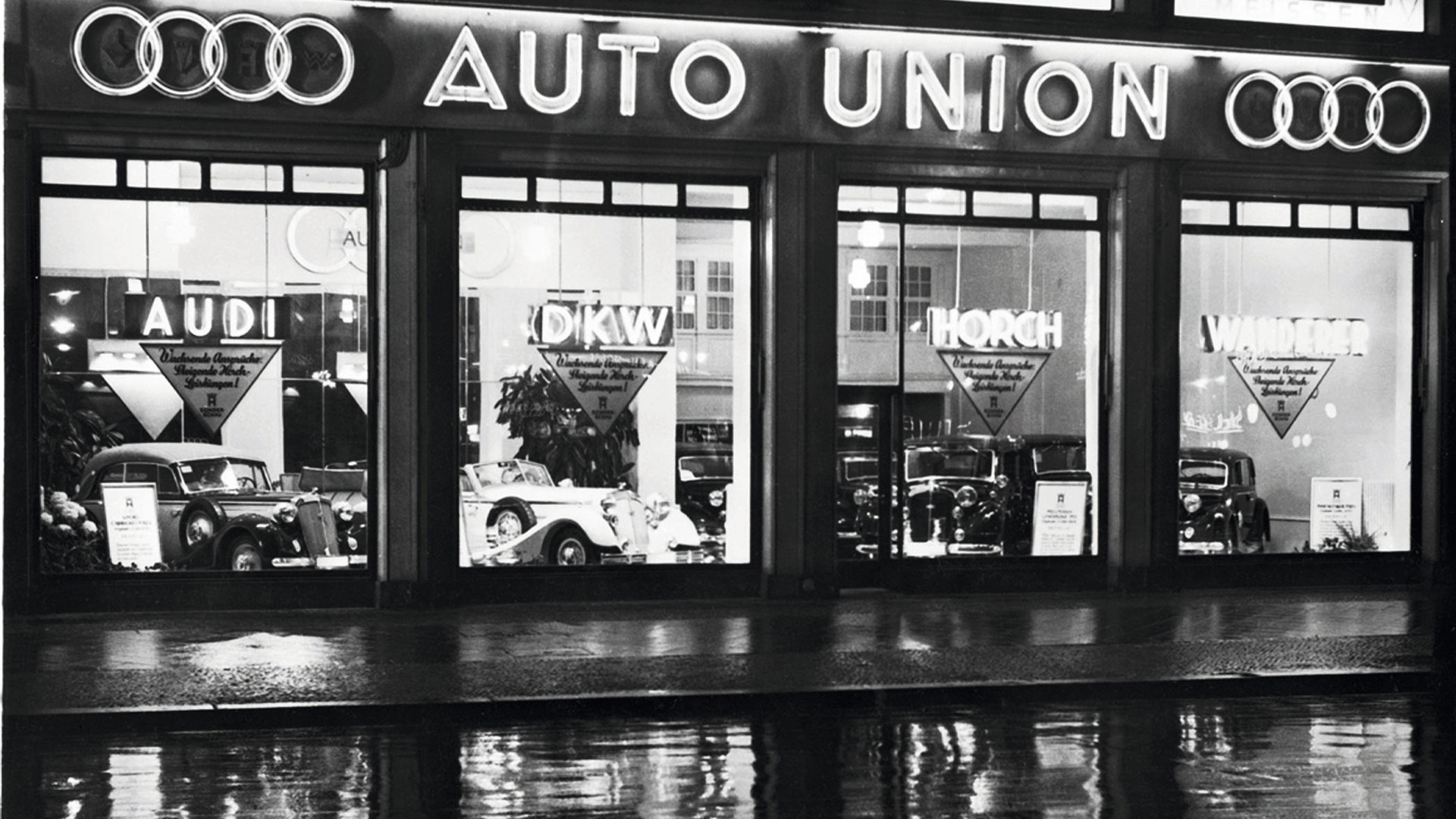 At the time, however, the new logo was only used to represent Auto Union, the corporate entity—each of the four brands continued to market their own products and use their same well-known insignias. The only pre-war vehicles to ever wear the interlocking rings were the iconic Silver Arrow race cars of the mid-1930s—frightfully fast and powerful signs of Germany’s newfound ambitions in the nascent Nazi era.

When war once again embroiled the globe, Auto Union quietly ceased manufacturing Audis, whose sales for many years had been dismal at best. The Wanderer name was likewise retired after the war ended, and the severe poverty of immediate post-war Europe meant that luxury vehicles like Horch were entirely inappropriate. By the late 1940s, DKW was the only Auto Union brand actively marketing new cars.

What Happened to Auto Union?

As the 1950s came to a close, Auto Union found itself in tough financial straits, leading Daimler-Benz to acquire the company in 1959. The new owners quickly figured out that the assemblage of Auto Union brands weren’t profitable and were further hampered by DKW’s association with antiquated two-stroke technology. Despite utilizing some of Auto Union’s factory space and even investing in a new four-stroke engine for DKW, Mercedes wanted out. 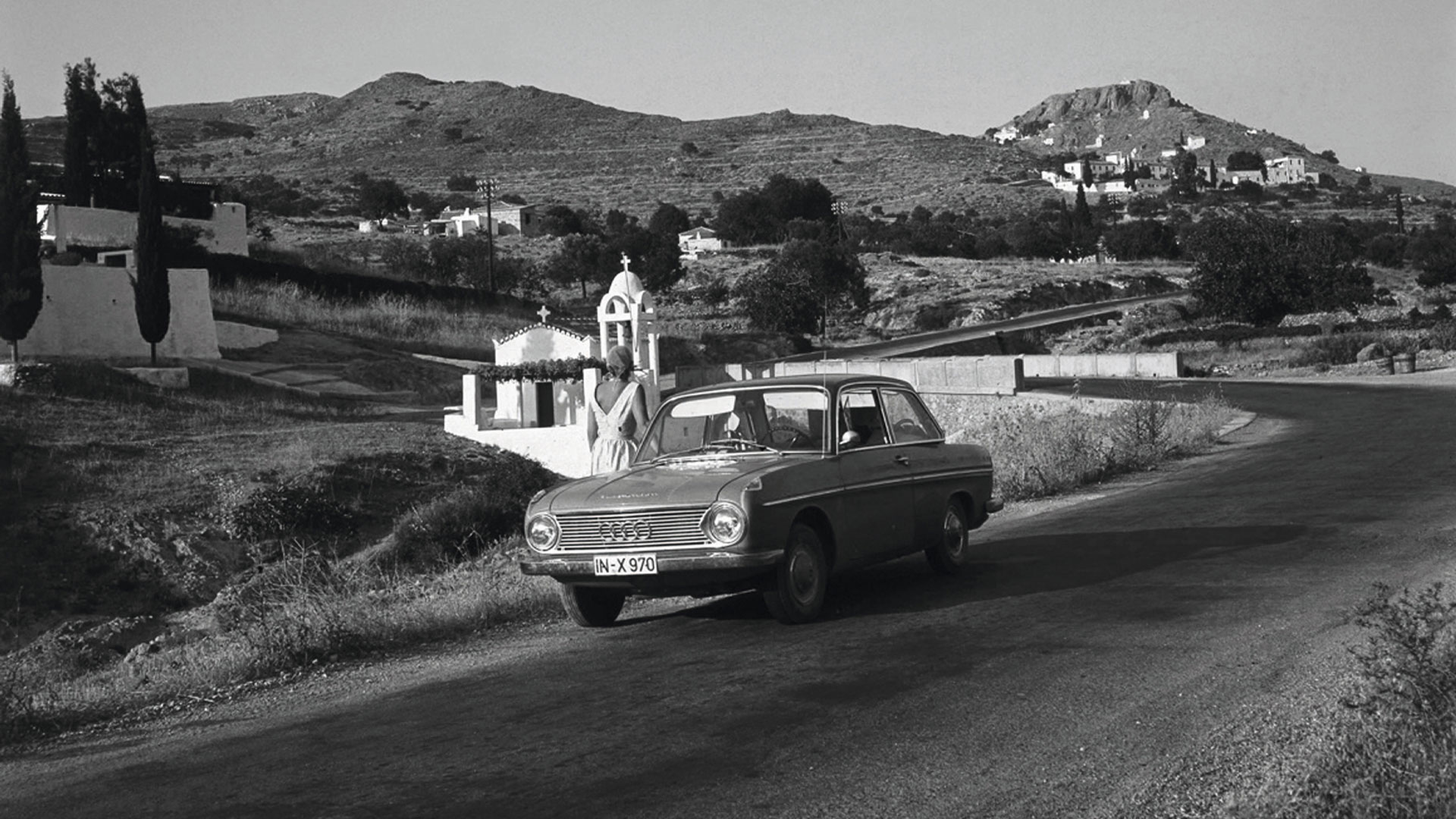 By 1964 Auto Union was sold again, this time to Volkswagen. By then, the Audi and Wanderer names had been dormant for well over 20 years, DKW was down to selling one two-stroke powered economy sedan, and the rights to Horch remained with Daimler-Benz.

The new four-stroke engine, however, was part of the deal. Volkswagen, eager to get this engine into production, dropped it into what had been the last DKW product, the F102. The old car with the new engine was then rebranded as an Audi to avoid negative connotations with the DKW name. This humble, dowdy sedan was the first car to bear the Audi name since 1939 - and the first Audi to wear the four-ring logo. 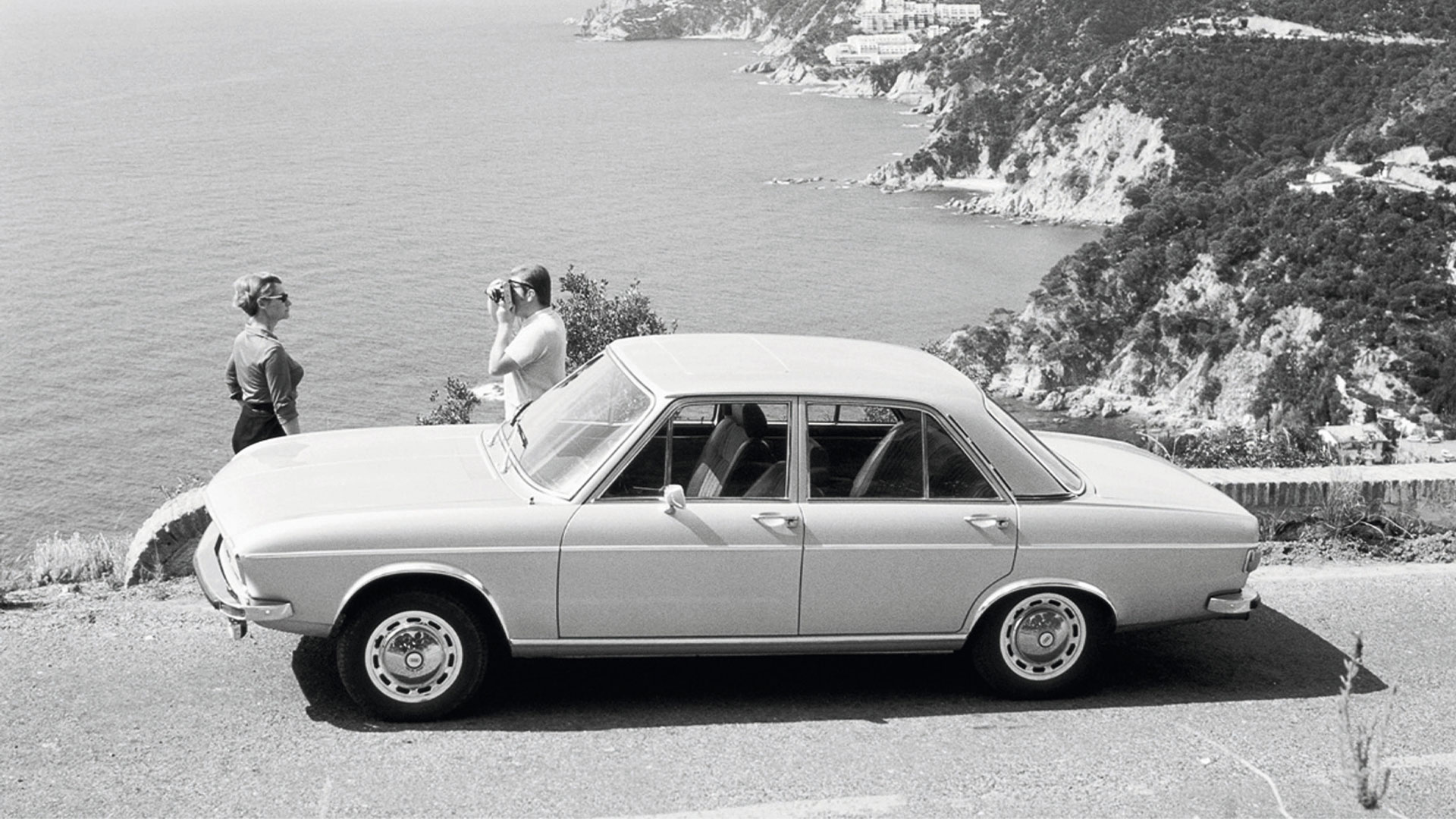 While consumers became acquainted once more with the Audi name, Auto Union engineers quietly developed the 1968 Audi 100—the first properly new Audi. It was a sensation and paved the way for the future of the brand.

After the Audi 100, the other brands that had once made up the Auto Union empire became lost to history. Even the Auto Union name mostly went away, with Volkswagen using its own name for corporate and legal purposes. However, Auto Union hasn’t entirely disappeared: the name continues to live on as a subsidiary of Audi responsible for their intellectual property and heritage operations.

Since the Audi 100, the brand has continued to grow and mature under the tutelage of Volkswagen. It first came into its own in the 1980s with the then-novel all-wheel drive models such as the Ur-Quattro, made famous in Group B rally racing; followed up with the first high-performance RS model in 1994 - the RS2 Avant - and the first-generation A4, A6, and A8 sedans in the late 1990s.

Audi is now a luxury powerhouse, a brand that can go toe to toe with the best manufacturers from any country. Yet all models still wear upon their hood the four interlocking rings that signify the brand’s humble roots in yesteryear’s Germany. The iconic logo can now rightly take its place among the most renowned corporate symbols and insignias. 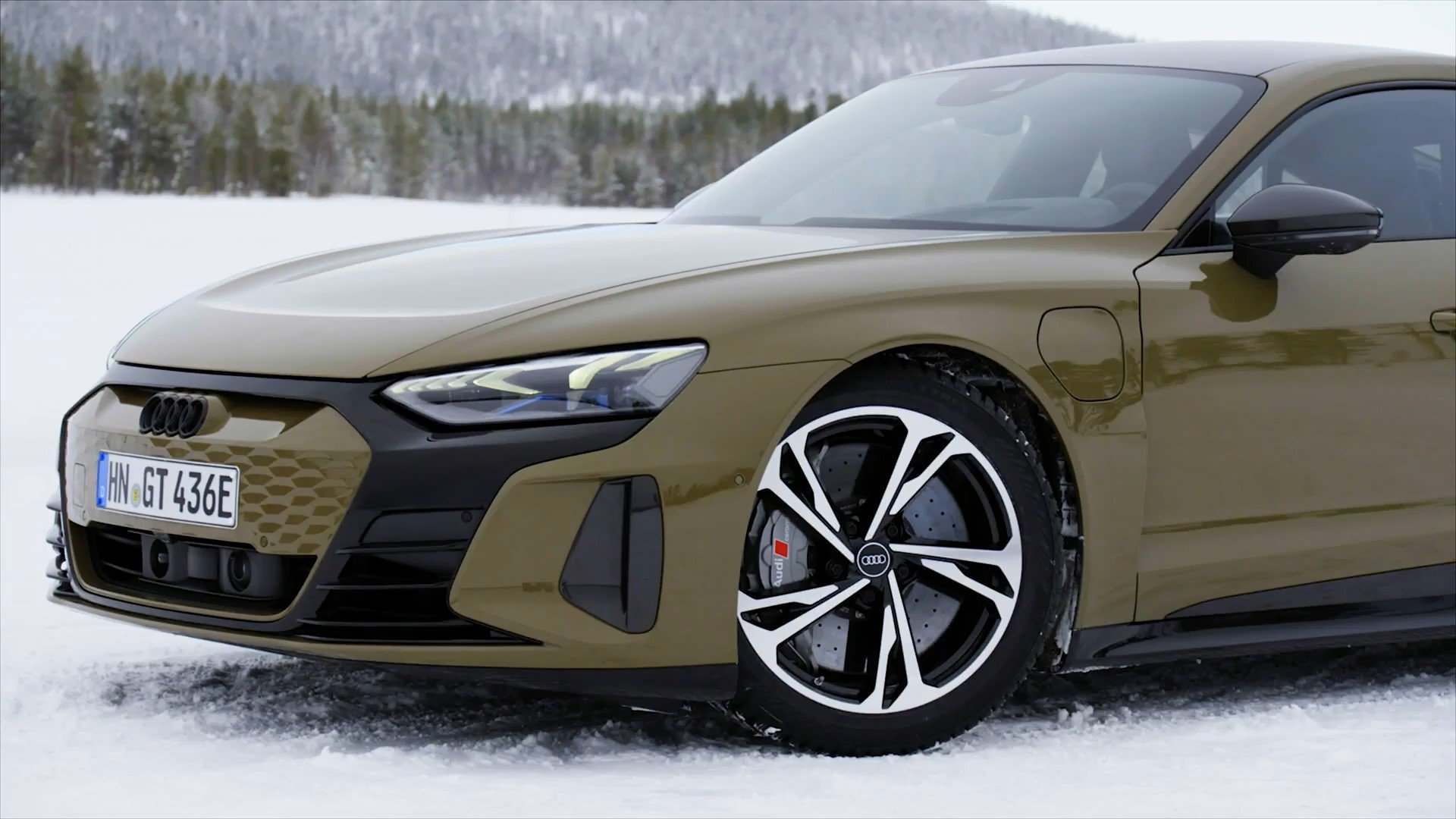 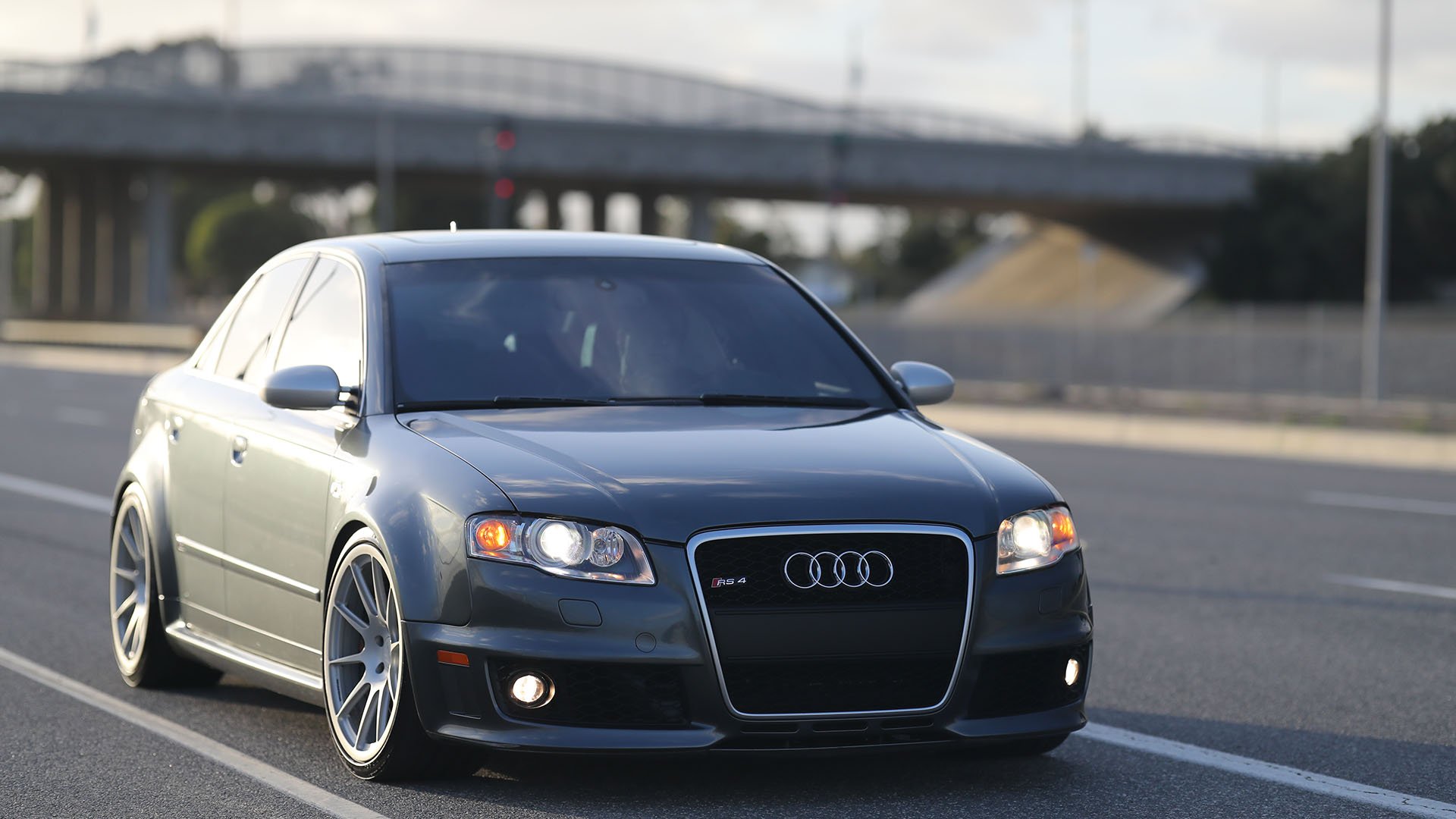