Years before working at FCP Euro, I worked at Home Depot in the hardware department. I didn't know it at the time, but I acquired a skill there that would come in handy when working on my BMW E30—rekeying.

When I got my E30 the central locking system was in good shape, the trunk and passenger cylinders worked perfectly. But I couldn't even fit a key into the driver’s side lock, neither of the two keys that came with my car fit.

A quick google showed me the way to release the backing plate that holds the lock in place, and it took about three minutes to pull the lock from the door.

Inspecting the lock it became clear that the reason I couldn’t fit a key in the lock was because another key had broken off in the cylinder. No big deal, pull the key out and the cylinder is all good! Unfortunately while disassembling the lock it became clear there was some severe damage to the lock mechanism as pieces of the arm crumbled in my hands. Additionally, and worse yet, the key had sheared in such a way I couldn't get even the thinnest jewelry pliers to fit.

Getting the key out at this point meant I could read the tumbler sizes and make a rebuild slightly easier than risking other damage by pulling another working lock apart. 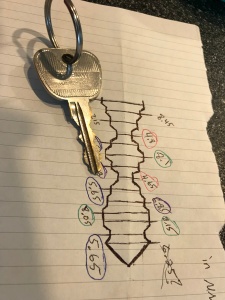 Apparently BMW locks were designed by a masochistic German puzzle designer. Unlike a household door lock which has pin-shaped tumblers, the tumblers on an E30 lock are donut shaped, meaning you can’t get a tumbler in or out while a key is in place. So when you can’t get the key out at all, you’re completely out of luck. Also, tumblers are fitted from both sides—in normal and “special” shapes. That means there’s about 12 million key combinations for a now $1600 car. At this point, I wanted to install a door knob.

I went for a complete rebuild of the lock. The rebuild kit from BMW includes several sets of normal and special tumblers along with their respective springs, grease, and all other components associated with the assembly.

While I waited for the delivery I got to work on the keys. Wanting to do as much upfront work as possible to make rekeying simpler, I took both of my keys (worn to different sizes) and a set of calipers and got measuring.

I measured each cut from the tip to the shoulder and marked it down. Then the same with the next key, eventually averaging the sizes (in hindsight I probably should have taken the maximum size because keys will never wear down to a larger size), and identifying which were equal depths.

Key cuts of equal depths meant the tumblers would be the same size (assuming they originated from the same side of the cylinder) and would make assembly easier. Luckily, it did.

When my kit arrived I reviewed the components and started to guess and check on the first size. Identifying the first size would narrow down the options for the second, and third as well. It took roughly 15 minutes to get the tumblers on both sides correct and start assembling the lock. This video was an invaluable resource as I went through the process.

As I put it back together I tested, and retested the key installing alternative tumblers to smooth out the action as I did so. One of the final steps in reassembly is a rolled pin that you hammer in place, wanting to avoid removing the pin, I was very careful to use smooth tumblers, even if they were different from my initial measurements. Everything was spinning freely so I installed the pin.

Idiot that I am, I didn’t test the second key. So whereas the action was smoother with the one worn key, the second wouldn’t spin at all. So I popped out the pin and returned to my original measurements. This allowed both keys to spin well.

"Measuring twice is no good if you don’t follow your own advice."

Once fully reassembled I returned to the door and fought the awkward positioning of going armpit deep behind a window regulator to fit the backing plate in place again. 20 minutes of struggle and a scratched up forearm got it in place. 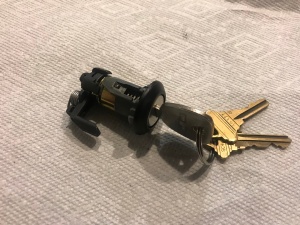 Excited to test the lock I stuck the key in the open door and turned it to the right to lock it. All the locks in the car sprung down, my heart lifted. Not a second later, they all sprung back up. Tested again, same thing. Tested in the trunk lock, same thing.

I figured I must have installed the cylinder wrong causing a strange tension somewhere that was making the system back off not unlike a garage door opener with a safety closing mechanism.

A quick search on the forums lead me to this thread which disclosed that the central locking mechanism will immediately unlock if the driver's door is open.

Verified! After closing the door, the entire mechanism worked, from any lock and either key.

With the entire system working and some other parts on order, it was time to return to something more aesthetic. Something that plagues a lot of these cars, something so deeply annoying it’s probably caused more accidents than rogue squirrels. A flaccid sunroof crank.