This Is What A Sub-$5000 Mercedes-Benz AMG Looks Like

If you’re at all familiar with the current car channels on YouTube, you might have noticed a new trend in the past couple of years. Creators like Samcrac, Hoovies Garage, Tavarish, Rich Rebuilds, and B is for Build have been buying salvage title cars at auctions with the intention of rebuilding them. Sometimes the goal is to bring the cars back to their former self, other times it's to make them look like they're straight out of Mad Max.

Earlier in the year, we featured Samcrac's Porsche 996 911 rebuild, which for the total cost, resulted in a remarkably nice car. Once again, Sam won himself another German luxury sports car⁠—instead of Porsche though, it's their Bavarian brother. A 2003 Mercedes-Benz E55 AMG.

When Sam emailed me about his most recent car purchase, and I read that the purchase price was  just shy of $5000, I never expected it to be in as good of shape as it sits. I mean, $5000 barely buys you a beat-up Hyundai with 100,000 miles, never mind a German luxury sedan that had a price tag of $75,000 when new. Like every project before, he got this E55 AMG for an absolute steal.

From the rear 3/4 of the car, it looks flawless. Even sitting in an auction lot for who knows how long, the black paint still shines. The real problem is when you get to the front as you can clearly see from the photo below. It looks like this Mercedes ran into and over something, taking out the front bumper and cooling components. Surprisingly, so far it seems that the frame remained unharmed in the accident. 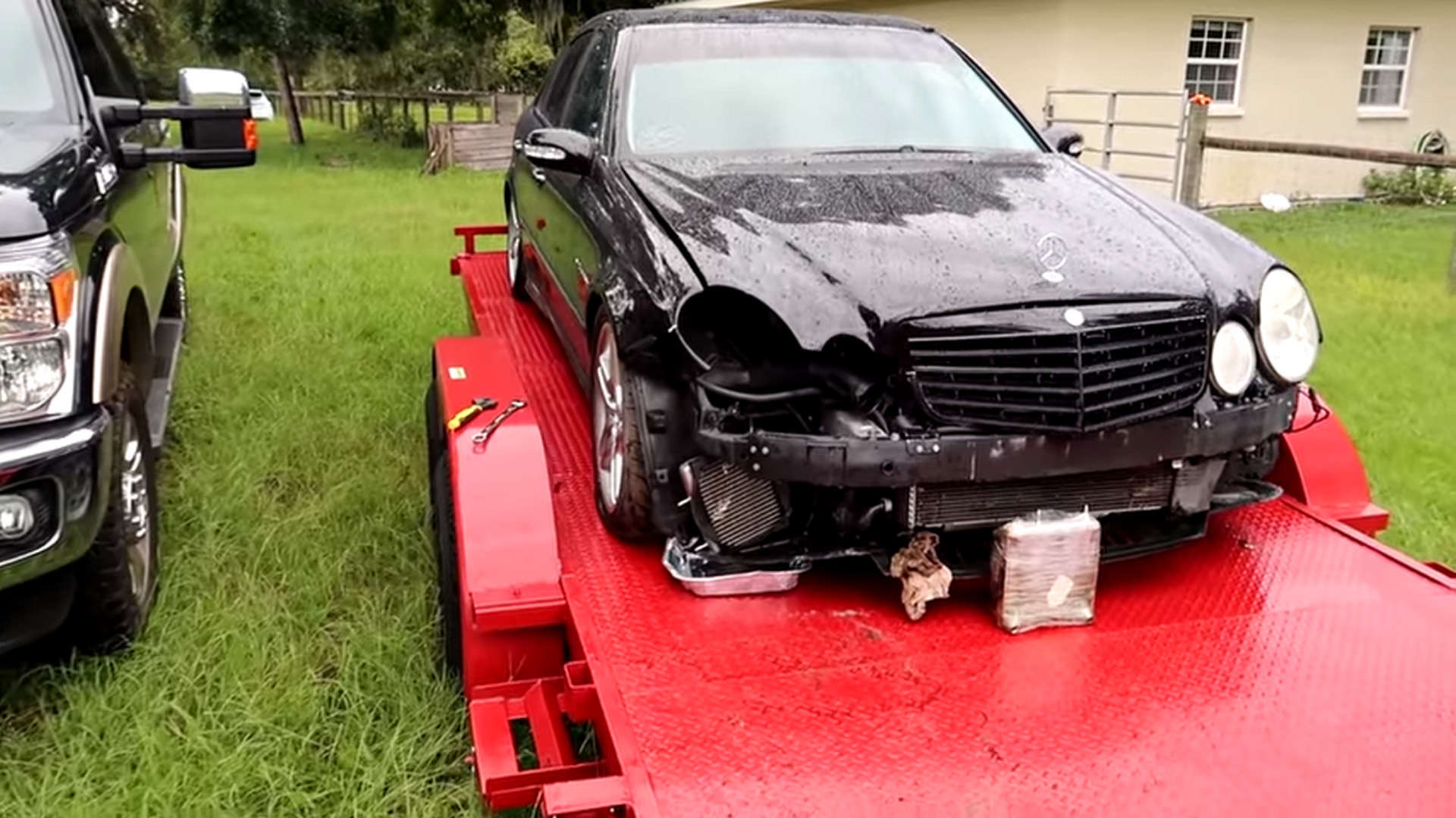 Anyone with a Mercedes-Benz AMG can tell you that one of the best, and worst, features is the factory air-ride suspension. When it's working, the car manages a balance of capable handling with cloud-like cruising comfort. When it isn't working, it can leave the car undrivable and is extremely costly to repair/replace. Well, that's the case with Sam's new purchase. Somewhere in the air-ride system, there was a leak causing the car to be completely aired out, laying low on the ground. Instead of trying to repair the system, he replaced it entirely with one of our convenient coilover kits and all of the parts needed to adapt it from air-ride.

There's still a lot to be done to get this car back to its former glory. The cooling system will need a complete overhaul, and you can't ignore the towering amount of bodywork that it seemingly needs. If Sam's previous projects are a sign of what's to come, we'll see a fully functioning, like-new, Mercedes-Benz E55 AMG back on the road again very shortly.

If you want to see more of what Sam's doing, you can check out his channel below. Don't forget to subscribe to get all new videos pushed right to your inbox.