Turbocharging a car usually means that it becomes less reliable, but Kameron Baker’s 1989 BMW 325i E30 demonstrates that time and tuning can break that stereotype.

“I got the E30 in 2007 as my first car,” explains Kameron Baker about his 1989 BMW 325i, “it was $800 and had about 90k miles on it at the time. I wasn’t really looking for an E30 or even a BMW, but it caught my eye and fit the high-schoolers budget for a first car.” At the time, it just wasn’t the BMW to own and most people wanted the E36 or something else completely different. Now, thanks to social media, the BMW E30 is the car to own. “After watching a few YouTube videos of Swedish and Norwegian turbo E30s that were able to do rolling burnouts on the freeway and beat super cars in a straight line, I knew I wanted something similar.” 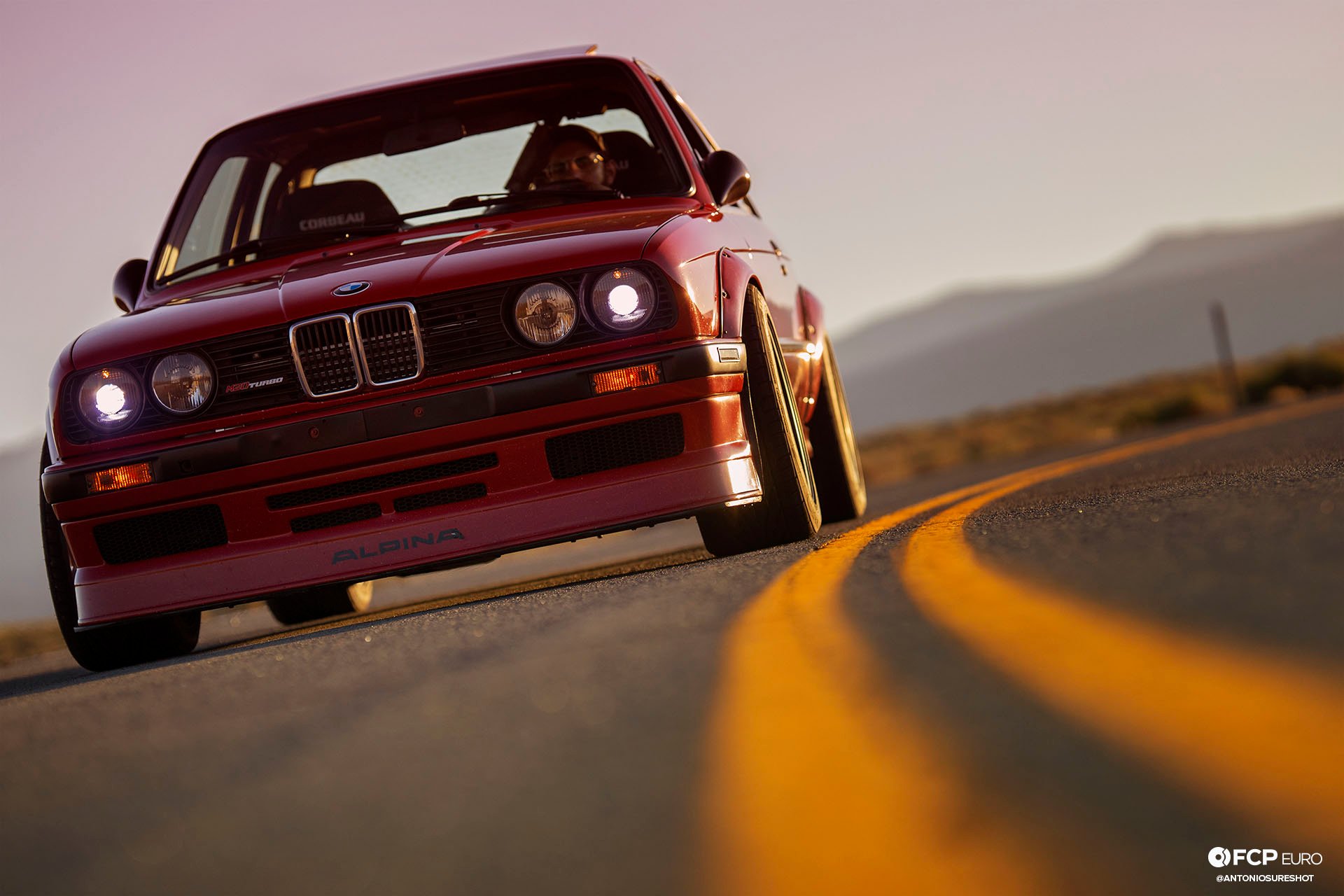 As Kameron entered college, he was collecting parts between the time his head was in the books. However, the goal then and now remains the same: make power while keeping it reliable. “I’ve had several different setups,” he explains, “I’ve probably gone through four or five different sized turbos, several manifolds and intercooler setups, but I’ve always just aimed at making the E30 as fast as it can reliably be. Finding the reliability part was tougher than making the car go fast. The factory M20B25 six-cylinder can really take whatever you throw at it as long as you tune it properly.” 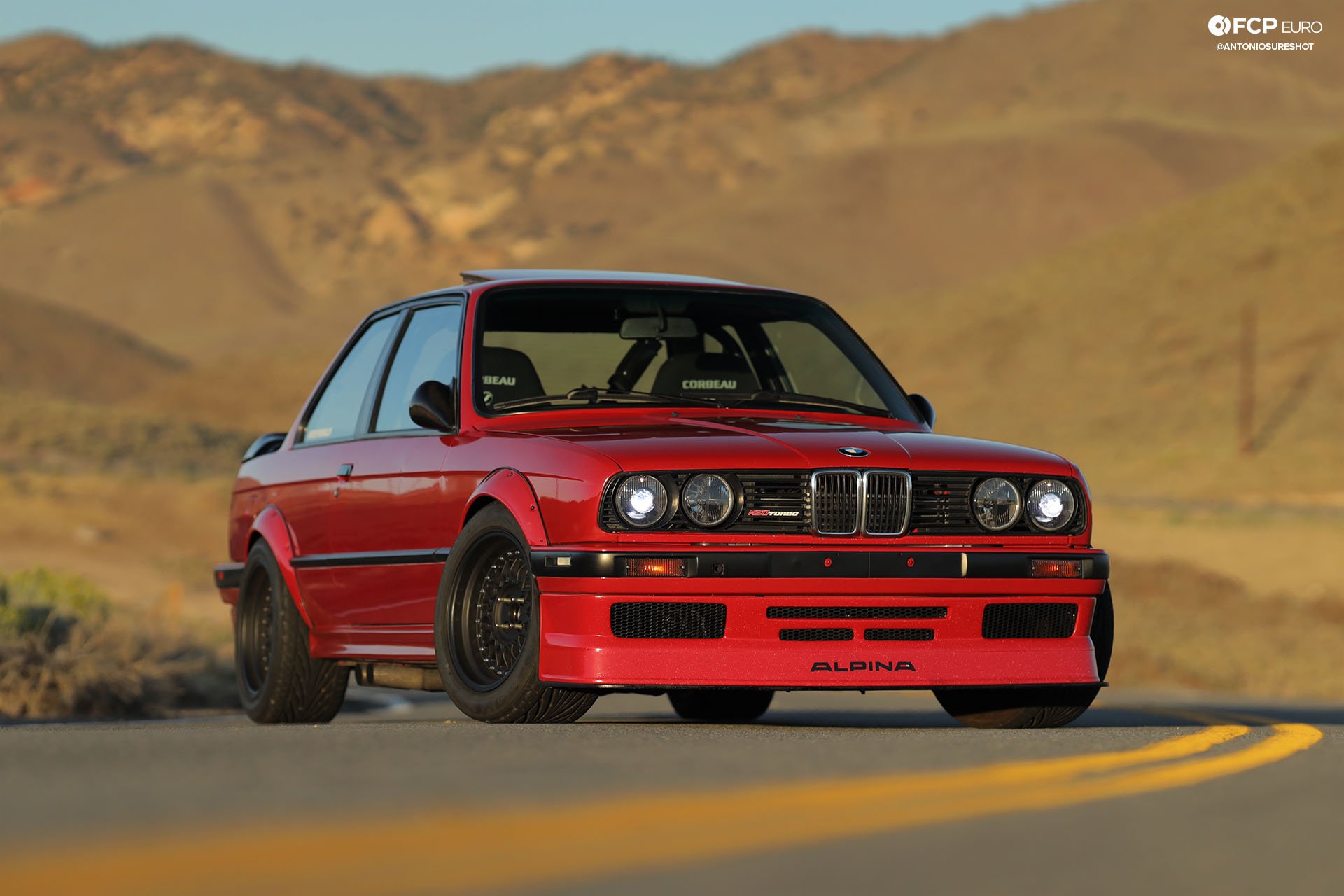 Power wasn’t Kameron’s only goal. It had to look good while going fast or standing still, and he achieved that by a mix of off-the-shelf parts as well as custom touches. The front valance is from Alpina but a custom front splitter was added. The fenders are widened with a set of custom Kamotors (his tuning and performance company) fender flares that house the 16x9 mesh wheels. Under the front wheels is a UUC Big Brake Kit with a pair of 11.75-inch diameter rotors clamped down by a set of Hawk HP-S pads. 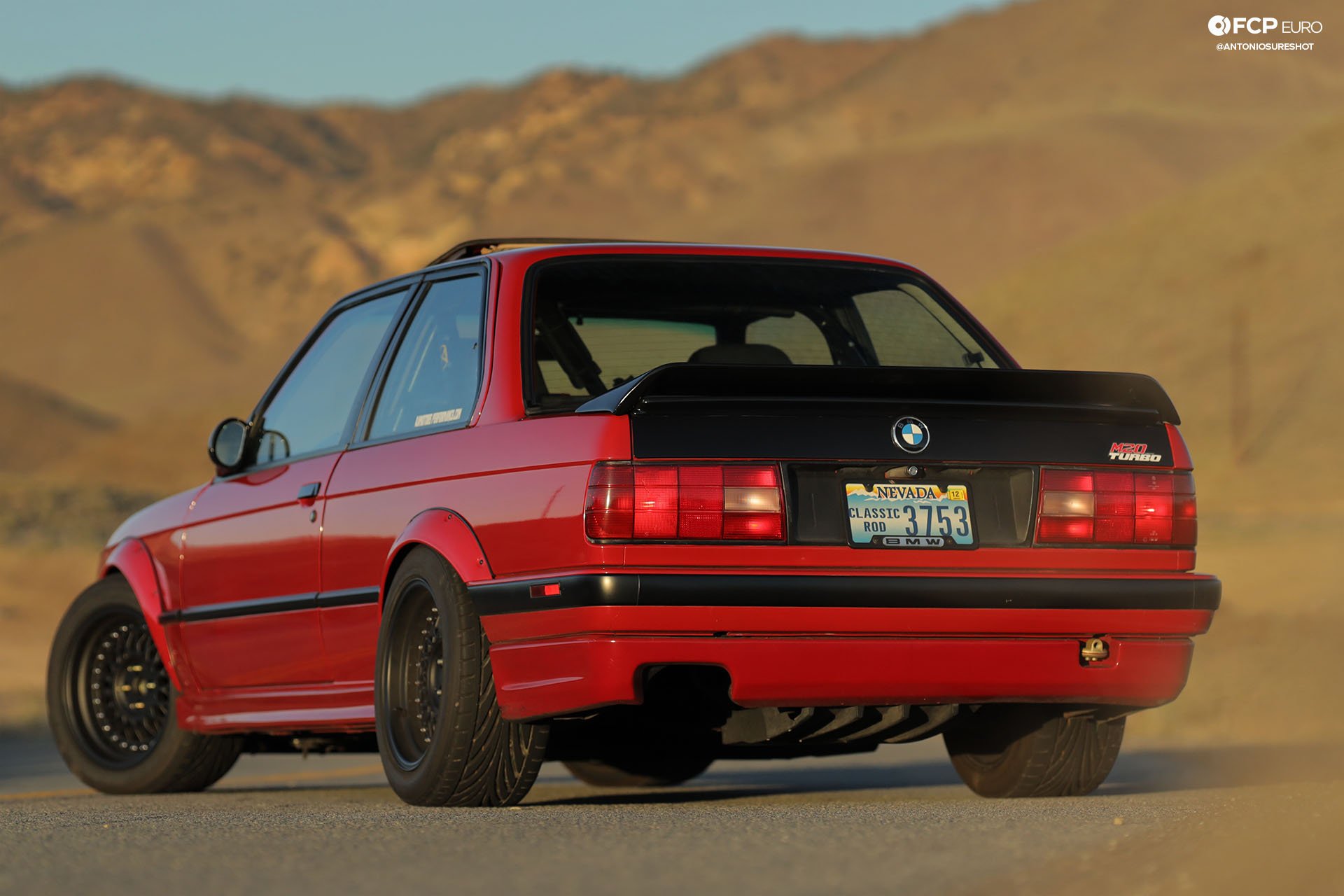 The Toyo Proxes in 245/45/R16 all around do their best to control the torque coming from the 3.73:1 ratio rear differential and its clutched LSD. 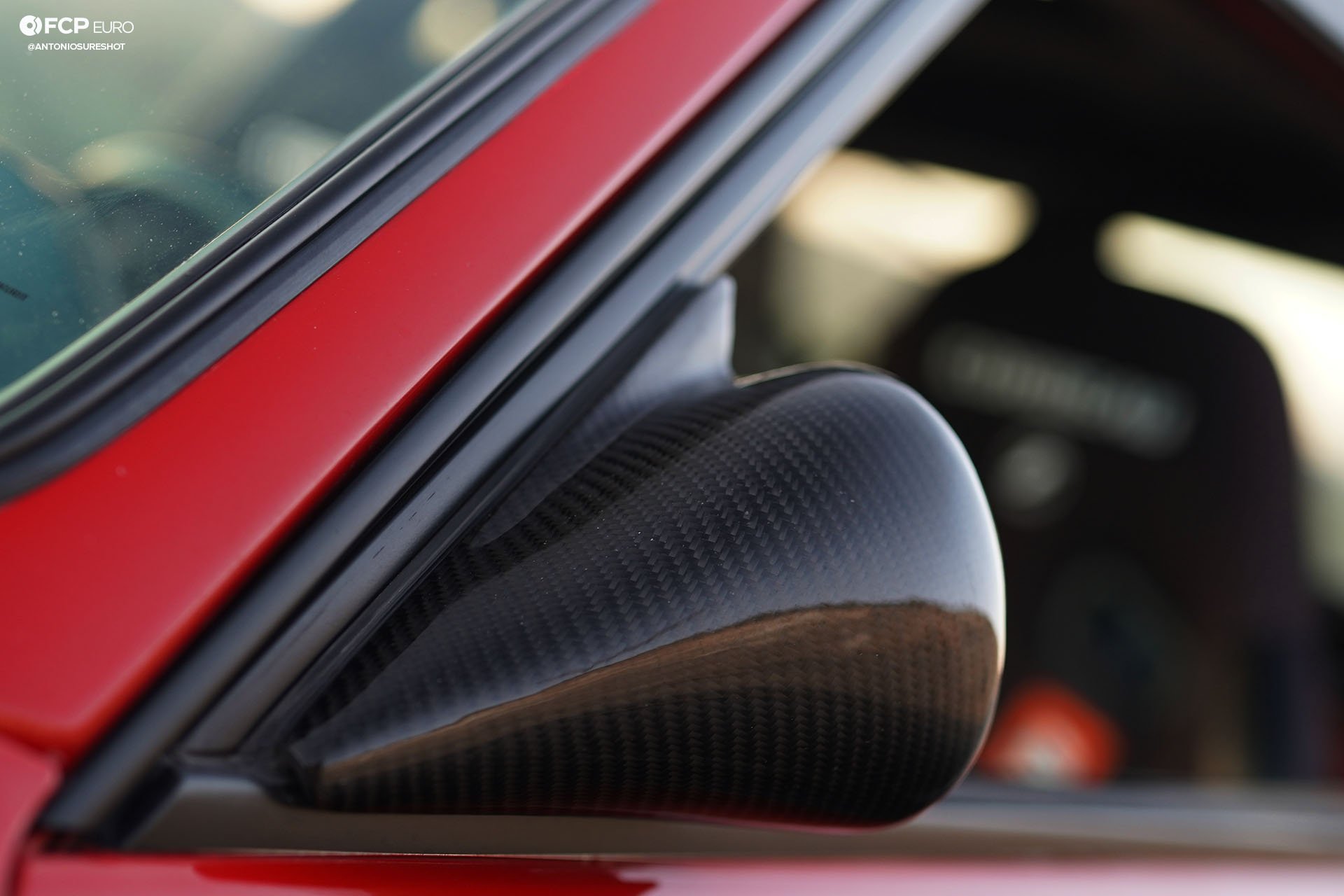 Other custom touches to the body include a pair of carbon fiber rally style mirrors while the Zender side skirts reduce some of the space between the ground and the rocker panels. 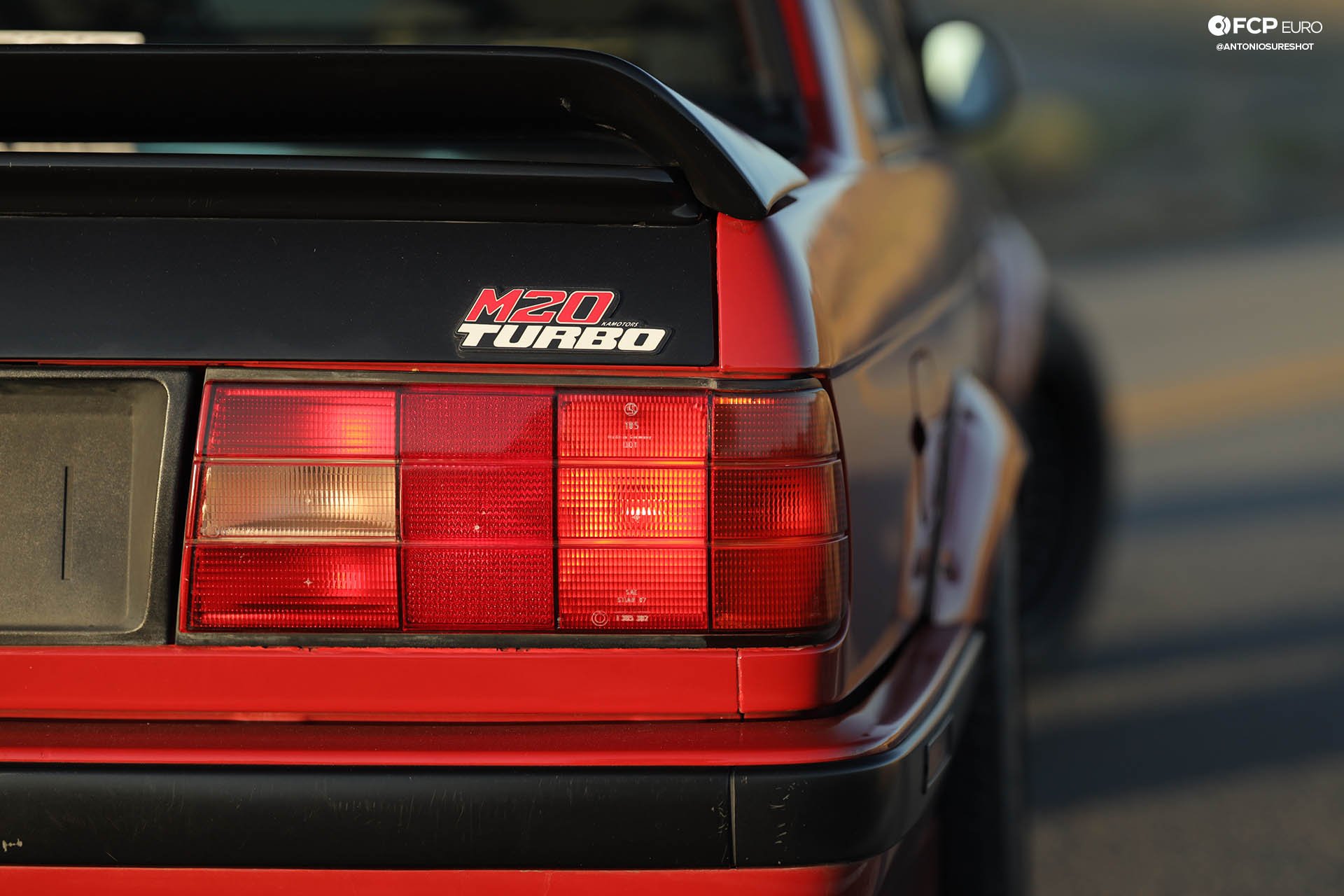 The decklid is stock but features an AC Schnitzer double spoiler while the rear bumper is from Hartge. The “M20 Turbo” badge was custom made by Kameron. This is not a sleeper by any definition, Kameron wants you to know what his hard work has earned him. 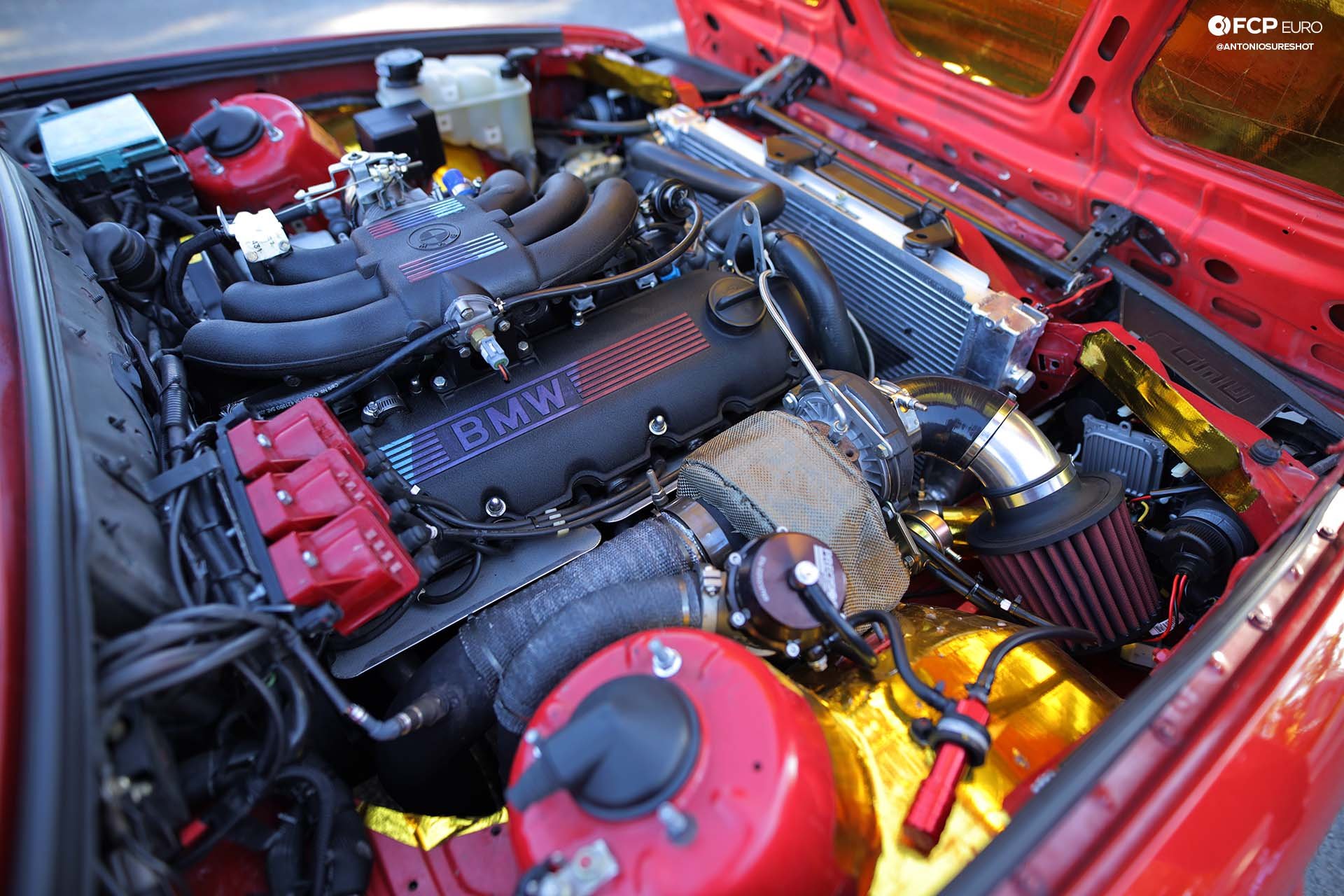 The engine is the M20B25, the same 2.5-liter engine that came in this E30 coupe. It’s definitely not factory, if that GT28-like turbo didn’t give it away. The head has seen some work with porting and a new pattern camshaft with heavy-duty rockers. A set of ARP Head Studs clamp the head to the block with a Goetze head gasket holding in the boost pressure. 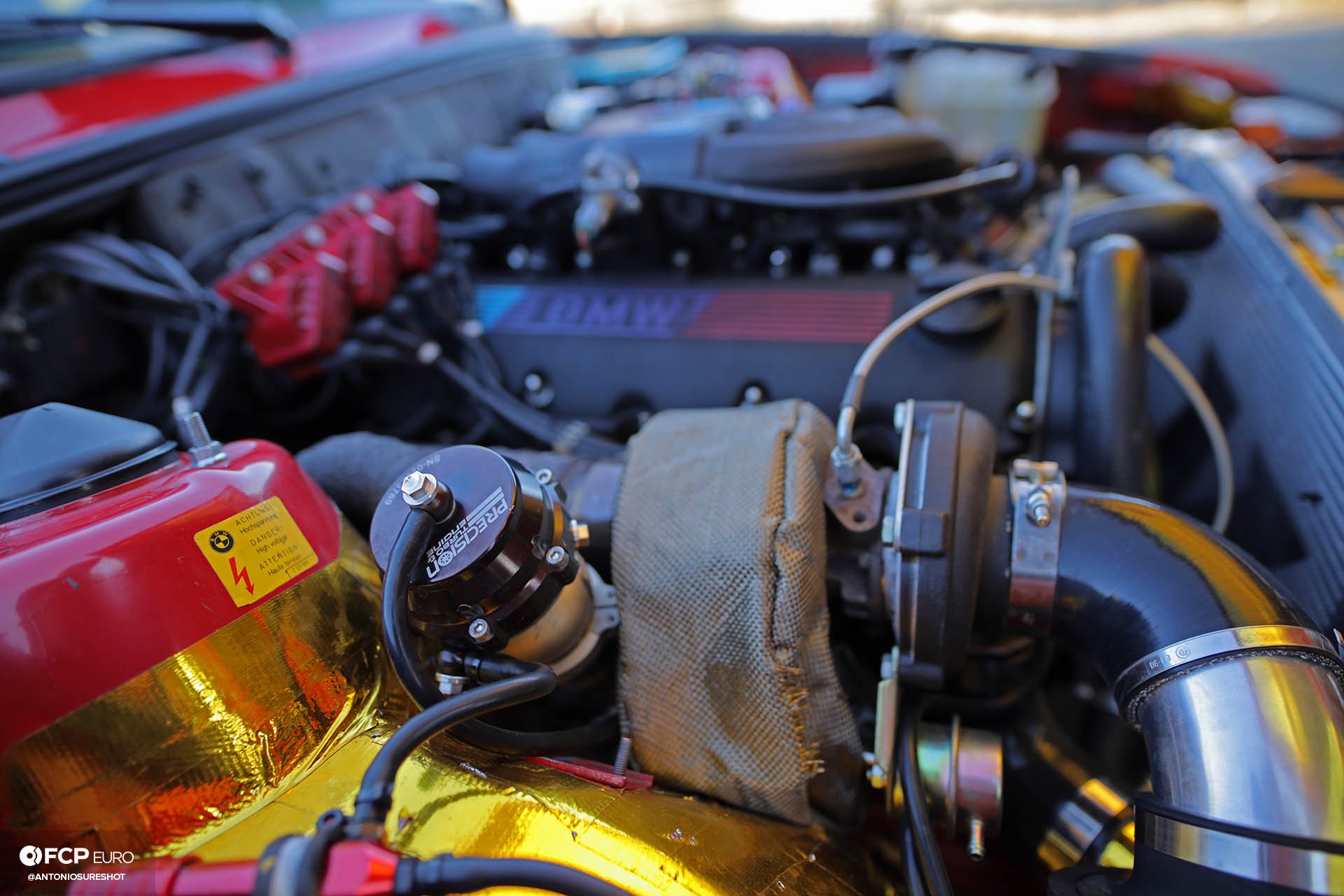 The bottom end, however, has been the same since it was first turbocharged in 2011. It just hasn’t had the need to be changed as the M20 rotating assembly does a great job with boosted applications. The turbo is a custom made Kamotors Budget Brawler kit. Again, the turbo is close to the same size and mapping as the GT28, but this current version runs a Precision Turbo 46mm wastegate to 15-PSI of boost. That can change if he decides to want to run a different setup, including adapting to an integral wastegate turbocharger.

“The car is setup so I can easily test other turbochargers and setups as the custom exhaust manifold works with both internal and external wastegate setups,” explains Kameron. A set of 60-lb/hr Deka fuel injectors with a custom mapped MegaSquirt 2 on a wasted-spark ignition setup has pumped out 401-horsepower and 380-ft-lbs of torque to the wheels according to the Mustang Dyno he used for tuning. Not bad for a 2700-pound car with a 2.5-liter I6. It sends its power to the transmission with an RHD Engineering seven-pound chromoly flywheel with a Clutchmasters FX400 clutch. 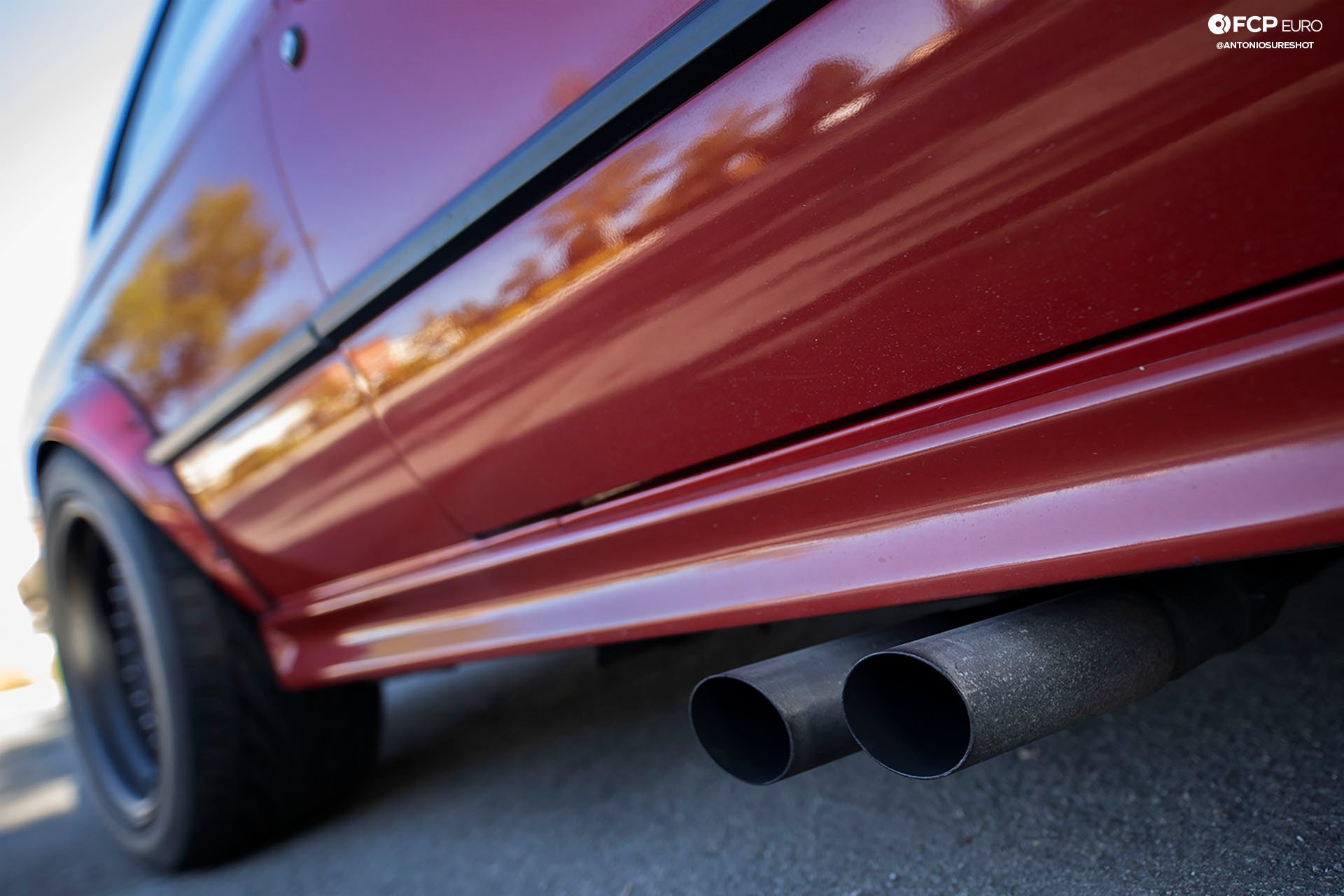 The turbo downpipe and wastegate exit out of the passenger side of the car with custom exhaust piping. 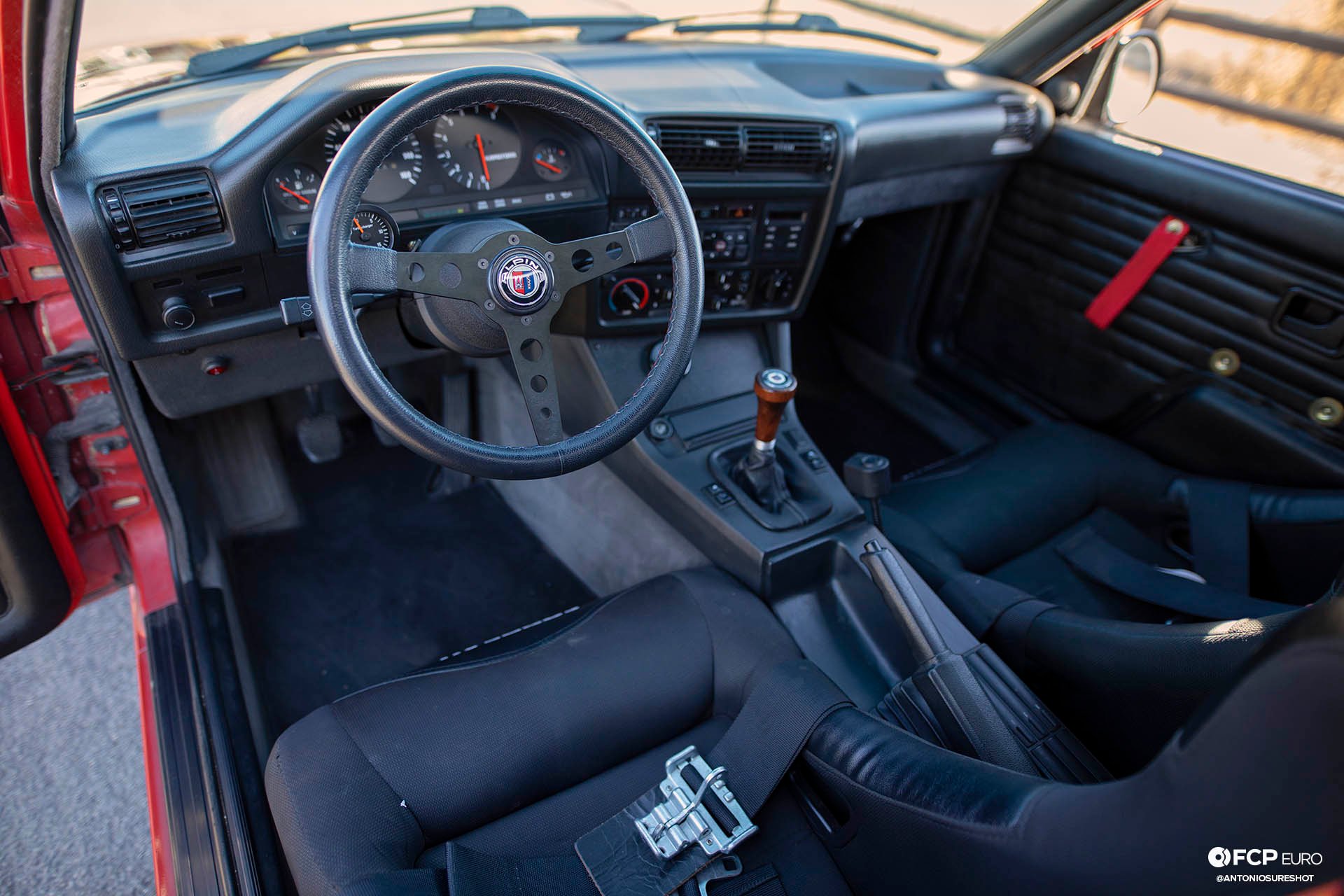 The interior is mostly stock, but there are touches to let you know this is Kameron’s BMW E30. The first thing you notice is the Renown steering wheel while he shifts the Getrag G260 five-speed manual with an Alpina wooden shift knob. 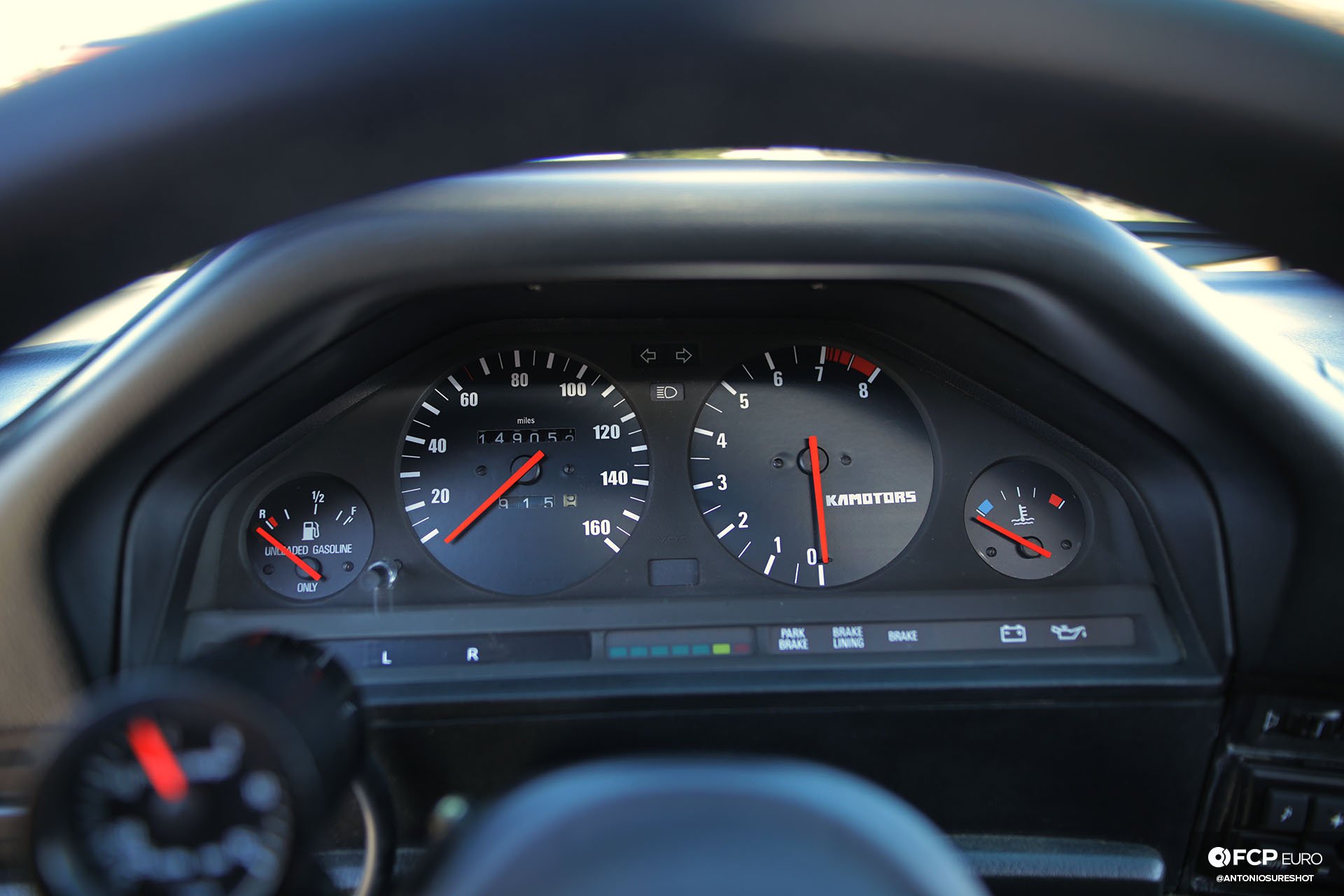 A nice, but personal touch comes from the Bavarian Restoration gauge cluster. They allow you to add your own logos or touches, so Kameron had them add the “Kamotors” logo on the tachometer. They can do more, depending on what gauge you’re sending them, but its most popular is adding logos like Kameron’s, while also doing repairs and/or restoration to the cluster. 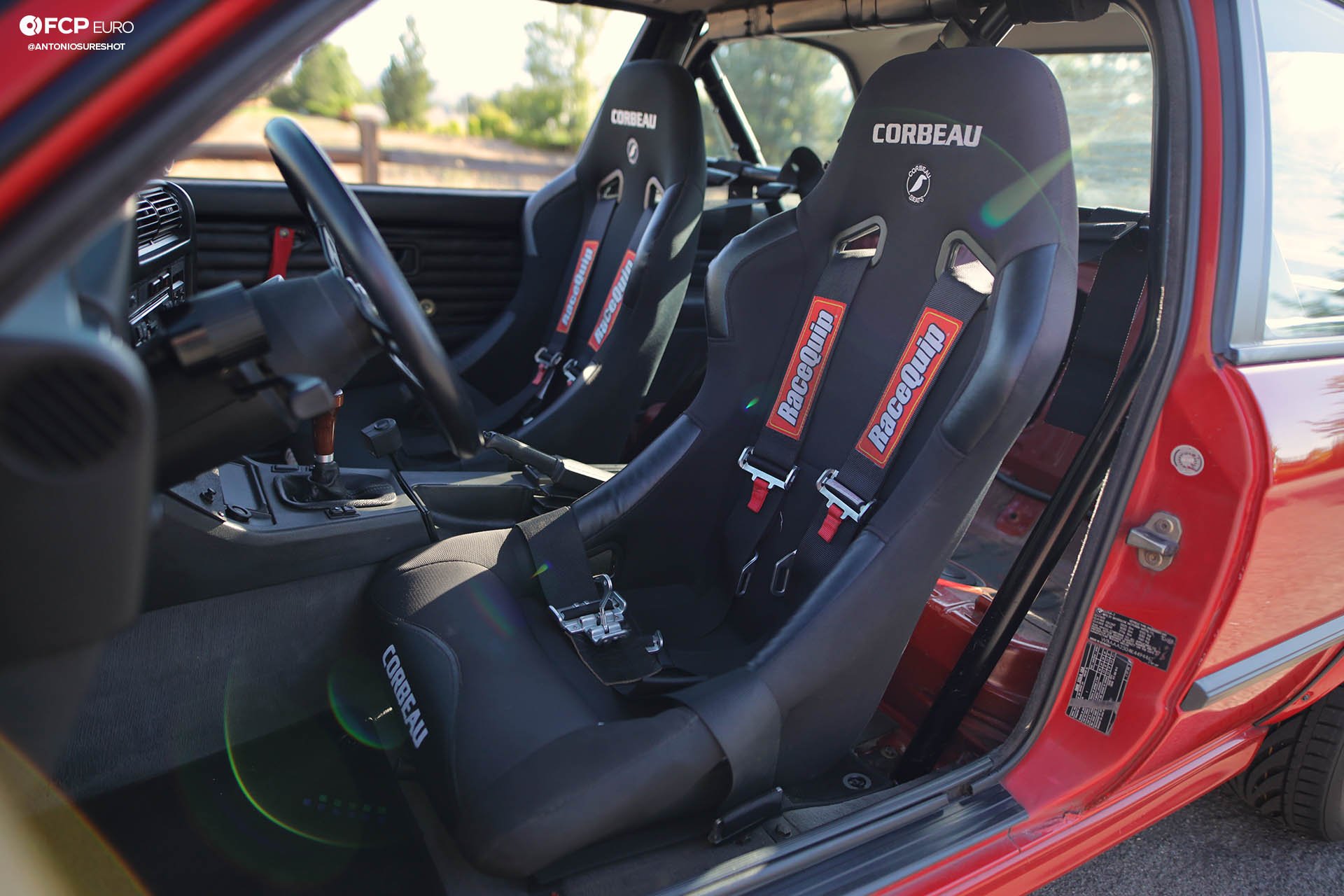 The BMW E30 features safety items, too, like the Competition Cages Roll Bar considering he uses this car on autocrosses and weekend drives around local curvy roads. This means it’s also safer to use five-point Racequip harnesses as it includes a harness bar. The roll bar will also keep the roof from caving in, meaning the shoulder harnesses aren’t an issue like they can be in cars without a bar. If you’re using a five-point belt in car without a roll bar, you could be injured worse as your body won’t be able to move as the roof crushes down. You should also use a set of five-point harness with a seat made for them, so that’s why Kameron is using a pair of Corbeau Forza seats. 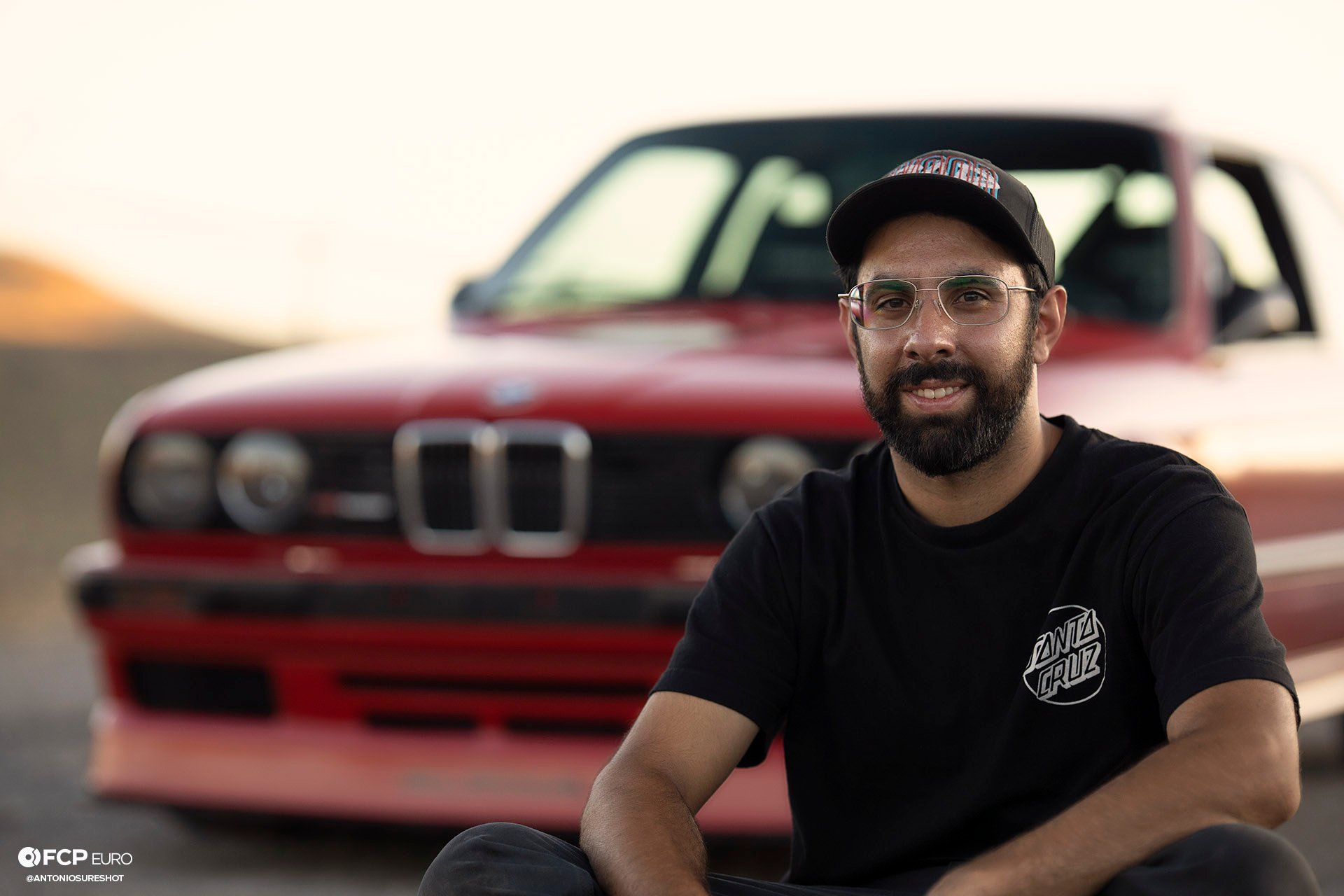 If there is one thing Kameron really wants to do, it’s restore the rest of the interior. “I really want to completely redo the exterior,” he told us, “strip it down get it repainted and put the interior back closer to stock with OEM insulation, rear seats, etcetera. E30s have gone up in value quite a bit since 2007 so it’s actually worth doing it up real nice in the future.” His advice to other BMW E30 owners? “Don’t cheap out on parts,” he says enthusiastically, “do lots of research and in the end your car will treat you right. Too many times have I seen people throw together a turbo setup without proper fueling and tuning and then blow something up.” 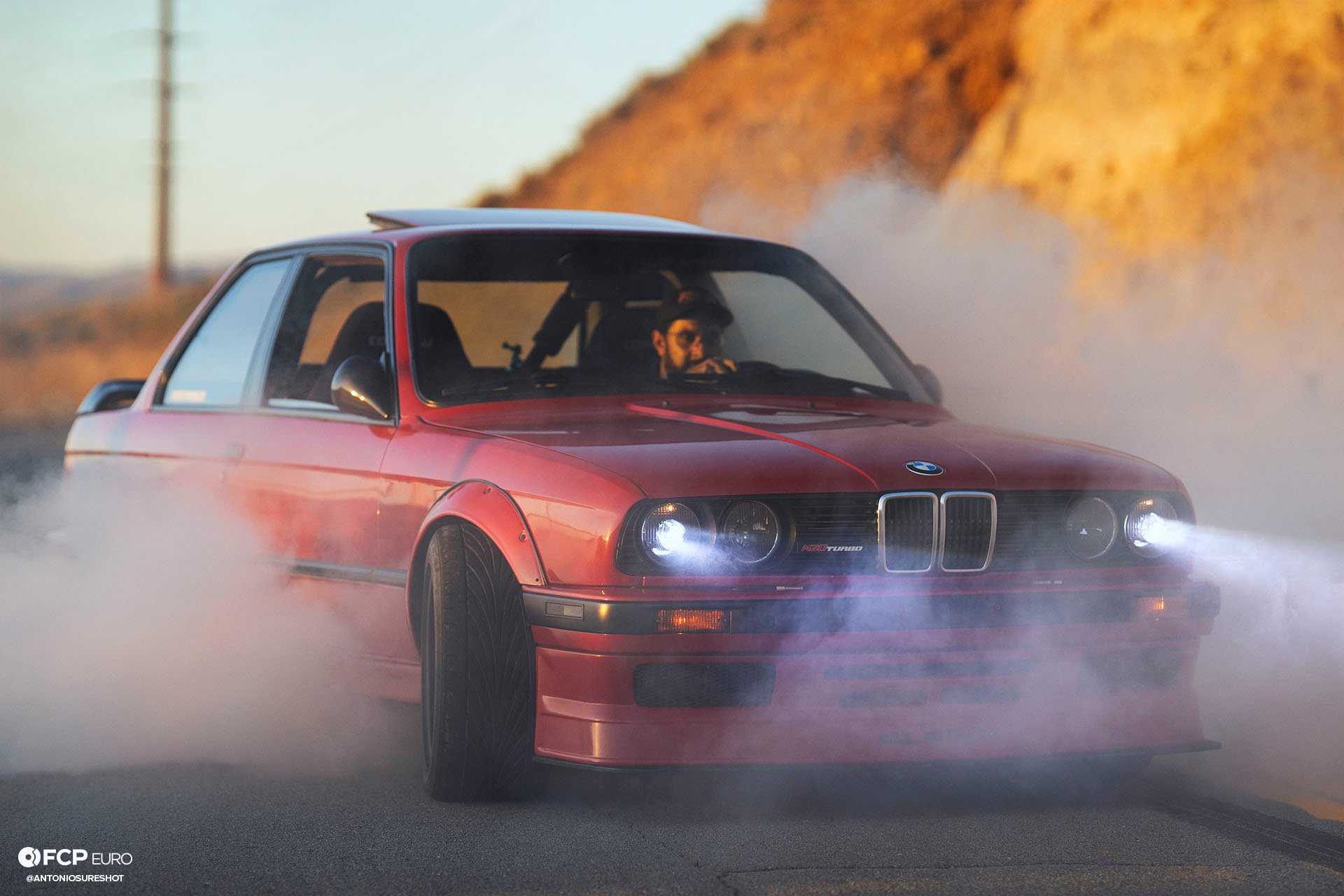 If the proof of the pudding is in the eating, then this shot of Kameron peeling out with a proper amount of tire smoke should be a good demonstration. The fact that he’s owned this E30 since high school with the same bottom end should nail the message home.

If you like this BMW E30, you can find additional BMW-related content at bmw.fcpeuro.com, as well as more build features like this one, here. If there's anything specific you would like to see, or if you have any questions/comments, leave them in the comments section below. 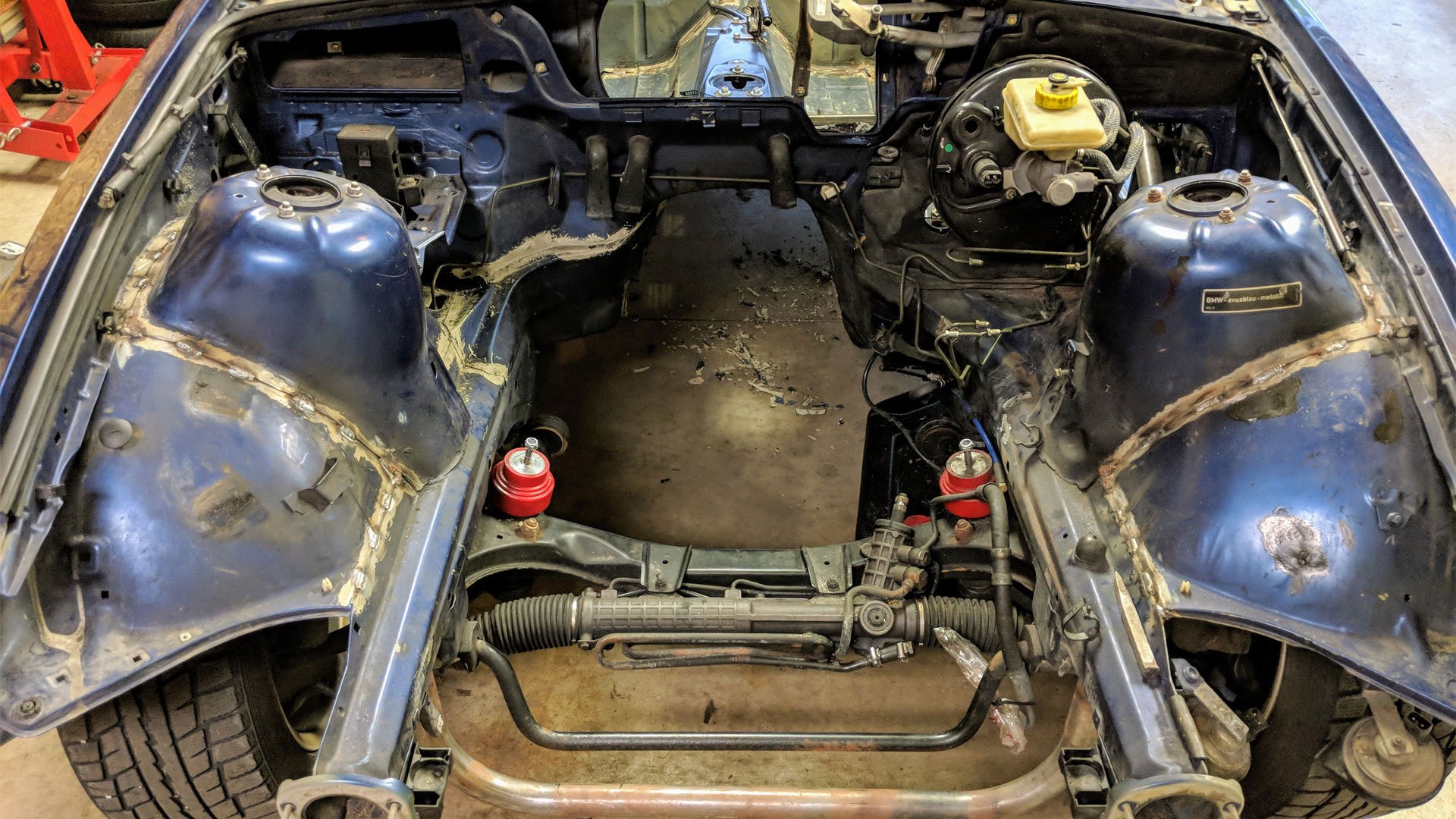