We'd all probably give up on our dreams after life-altering changes. David Hatmaker did the opposite with his amazing Mercedes-Benz E320 Estate with a full E55 AMG swap.

We know what you might immediately think by looking at the front of this 2001 Mercedes-Benz E320 Estate. You’d probably assume it’s some guy that has more money than you and spent it on a custom S210 and uses the plate to park closer to the store he’s driven to. Well, there is a reason the saying goes, “don’t judge a book by its cover.” David Hatmaker is in a wheelchair, but that didn't stop him from building this amazing car in his garage. 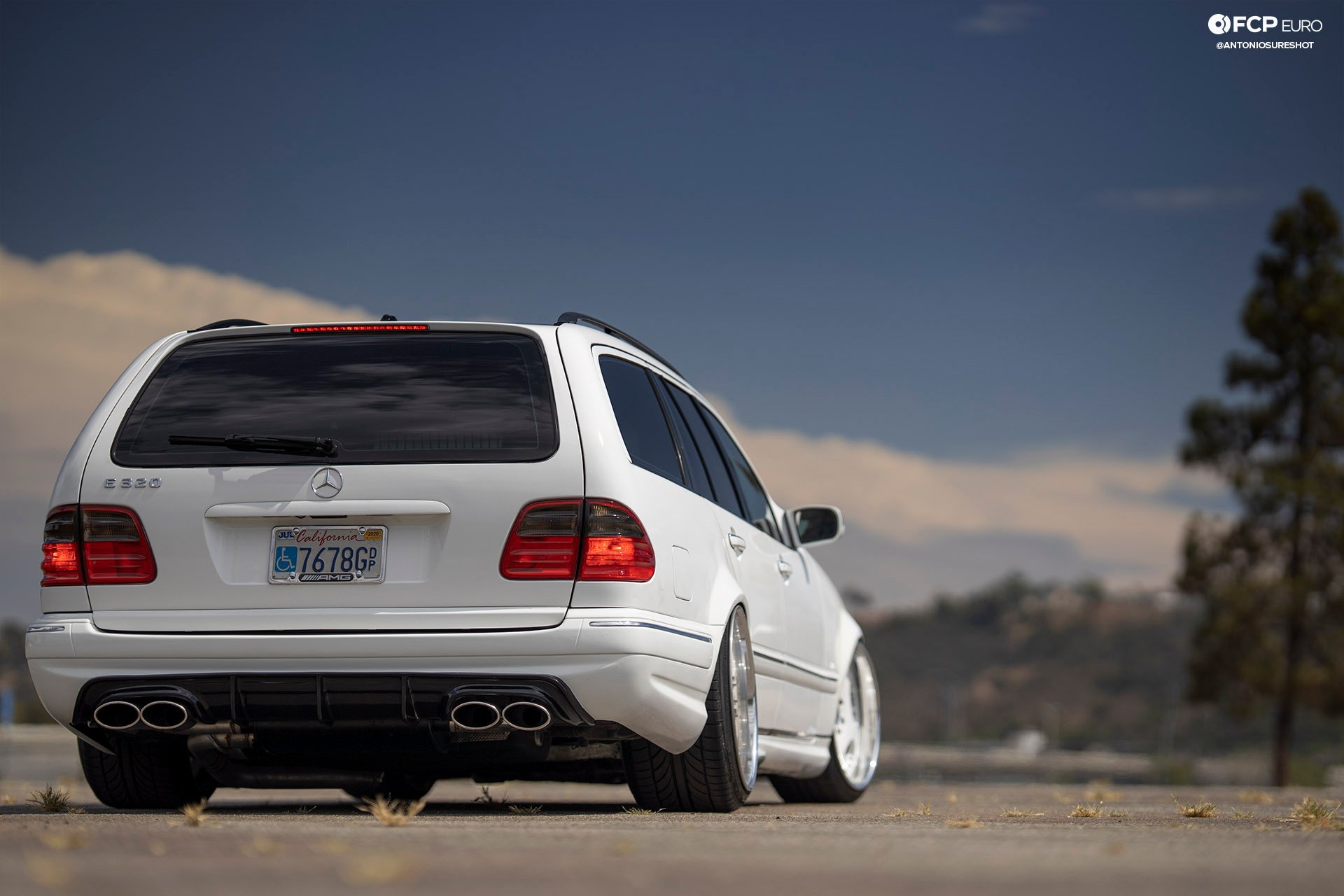 “It’s my garage build, and I am paraplegic,” explained David, “However, there are about a half dozen of these E55 wagon conversions in the United States now. Mine is the only one with white exterior and java interior color combo, and not a single S210 AMG came with this color combo. It also has all-metal widebody fenders and custom-built, generation correct, three-piece Wald wheels with air ride suspension.” 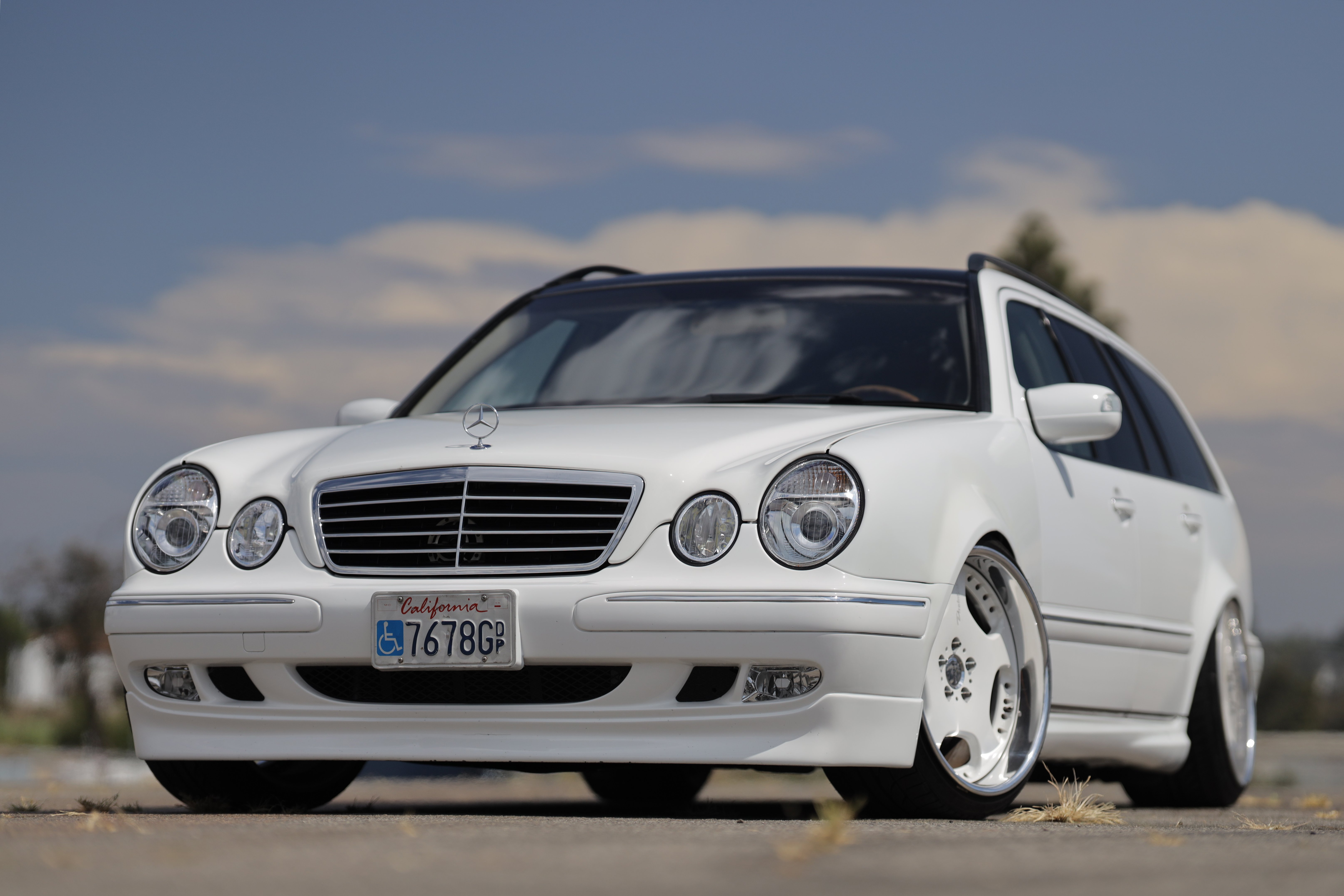 The amount of work done to make the car look this good is incredible. That Brabus front lip is a slight enough detail that some might not even notice, but one that just works so well when you do. They also don’t detract from the look of the W210 E55 AMG side skirts, either. Those UlteriorMotives SV2 two-inch wider front and rear fenders blend in and look factory thanks to being all metal construction with careful bodywork. It’s a clean look all around that you can’t achieve with most widebody kits on the market today—certainly, no bolt-on flare ever will. 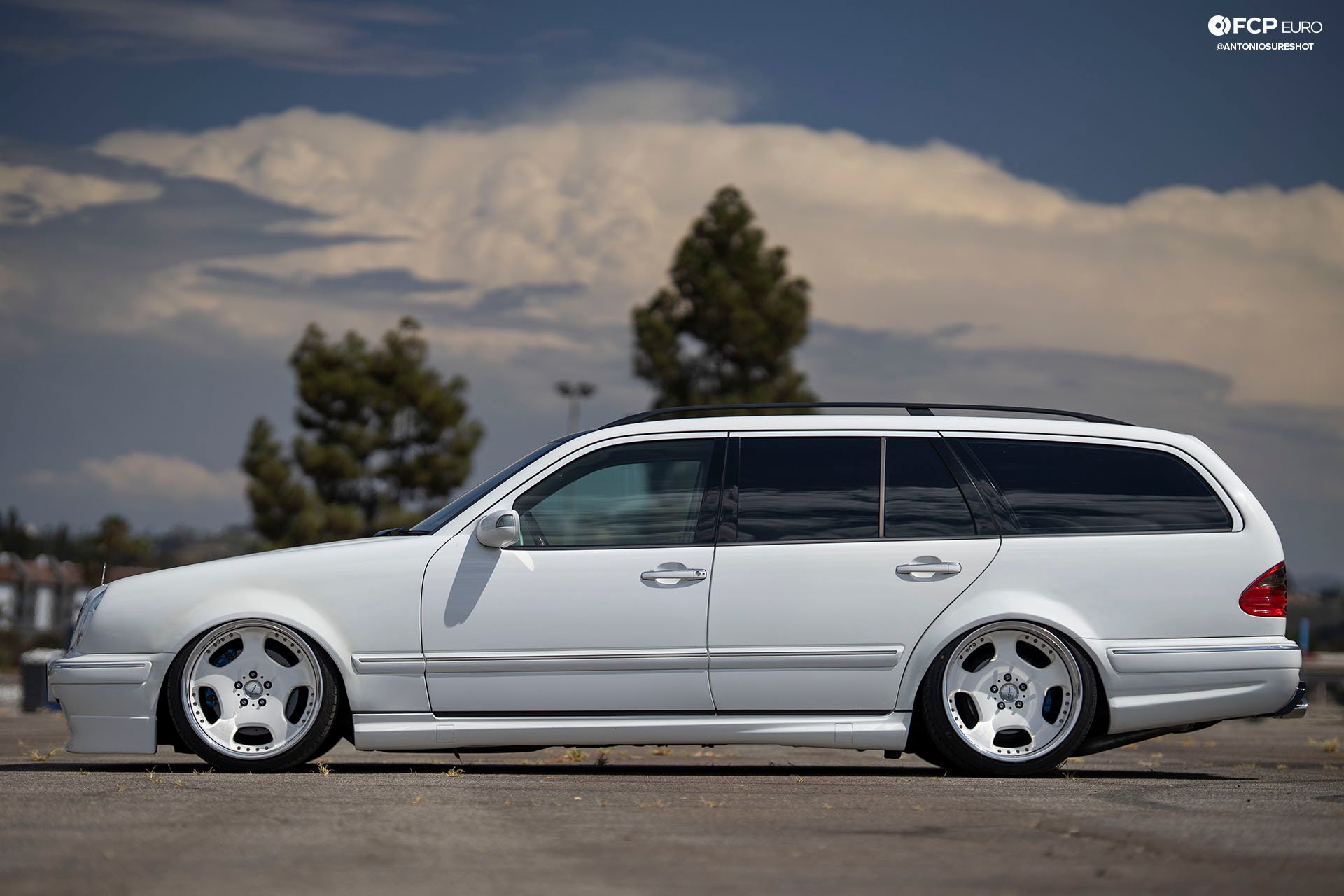 The car gets its ride height with a set of Slam Specialties SS-5 double-bellow air springs on each corner. The rear struts use Bilstein B8 Sport monotubes that measure out at 46mm in diameter. The fronts are K-Sport 32-way adjustable struts. The upper strut mounts are made for the airbags by BC-Fabrication. However, in doing so, the factory hydraulic self-leveling rear suspension was also removed; it doesn’t work with the Bilstein struts. 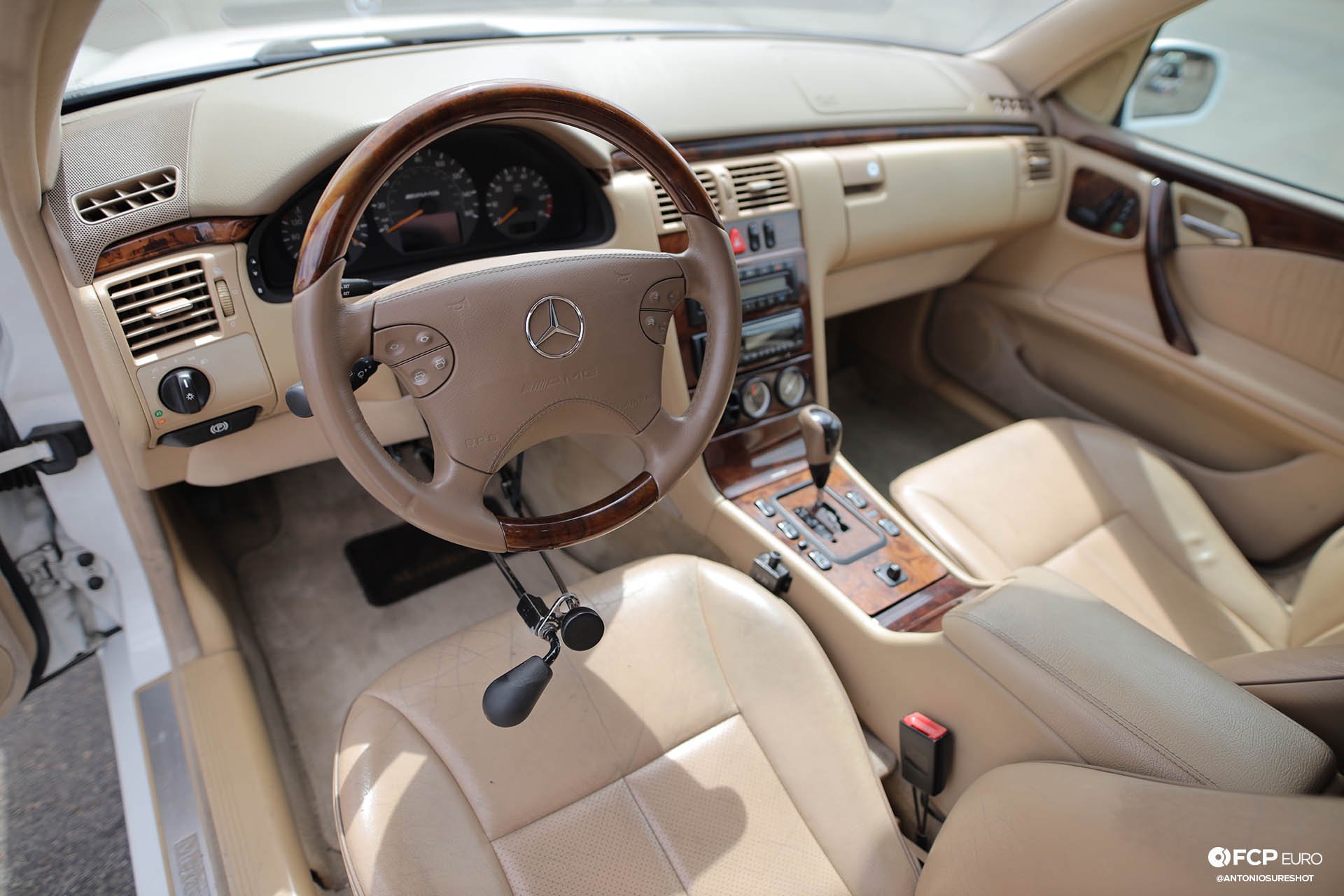 Inside, you’re treated to that java colored interior. It’s a nice contrast to the typical black interiors we see in these custom cars. It’s not a race car, it has no reason to be black. The steering wheel was swapped from the AMG and features burl wood on the top and bottom of the wheel. 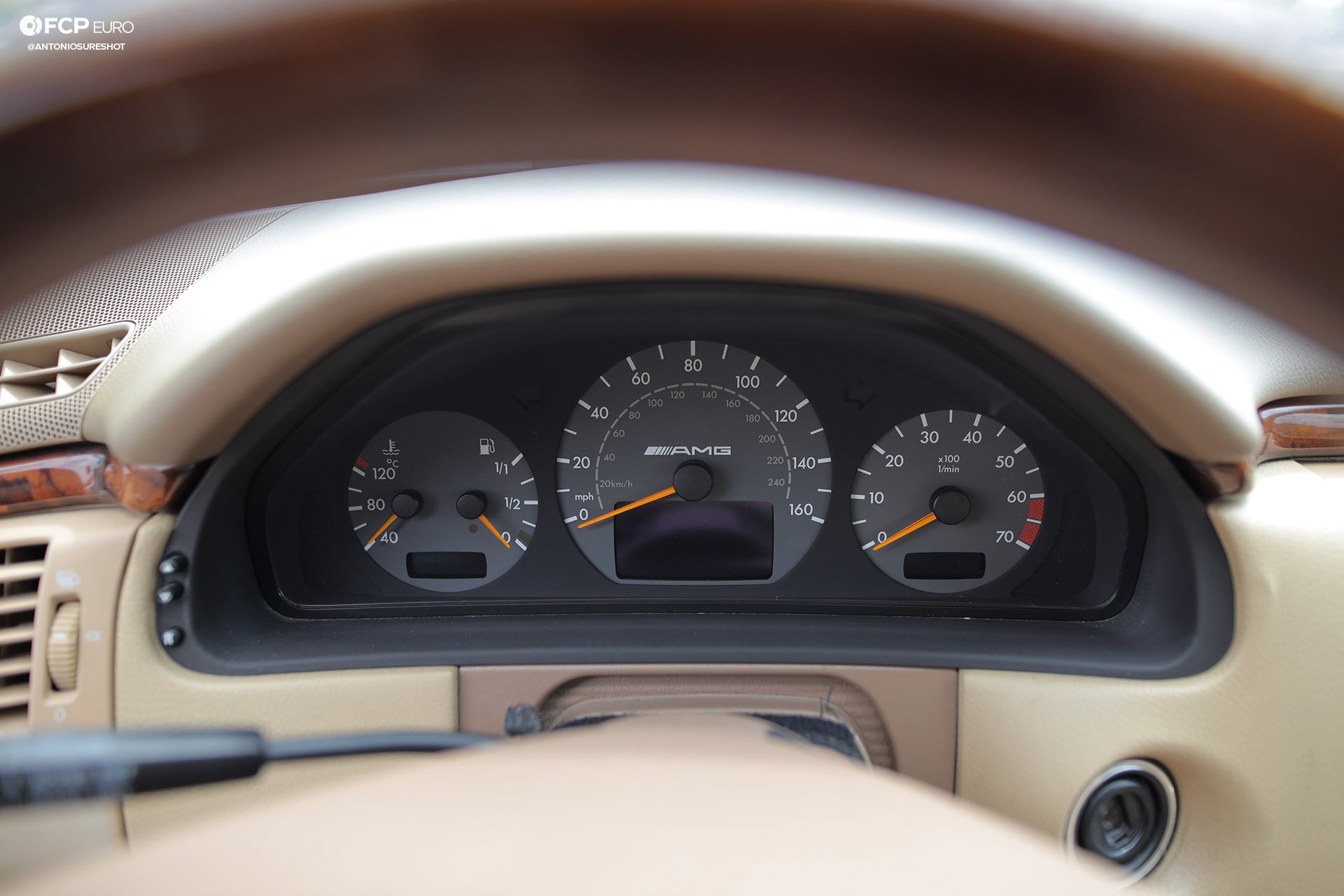 The reason you’re seeing the “AMG” logo on this Mercedes estate is because of the full E55 AMG swap performed on this chassis. The engine change wasn’t easy, which we’ll get into later, but it required changing over to the E55 relays, dashboard, ignition modules, and other electronic parts due to the DAS2 immobilizer. Without those changes, the ECU would not allow the engine to start. 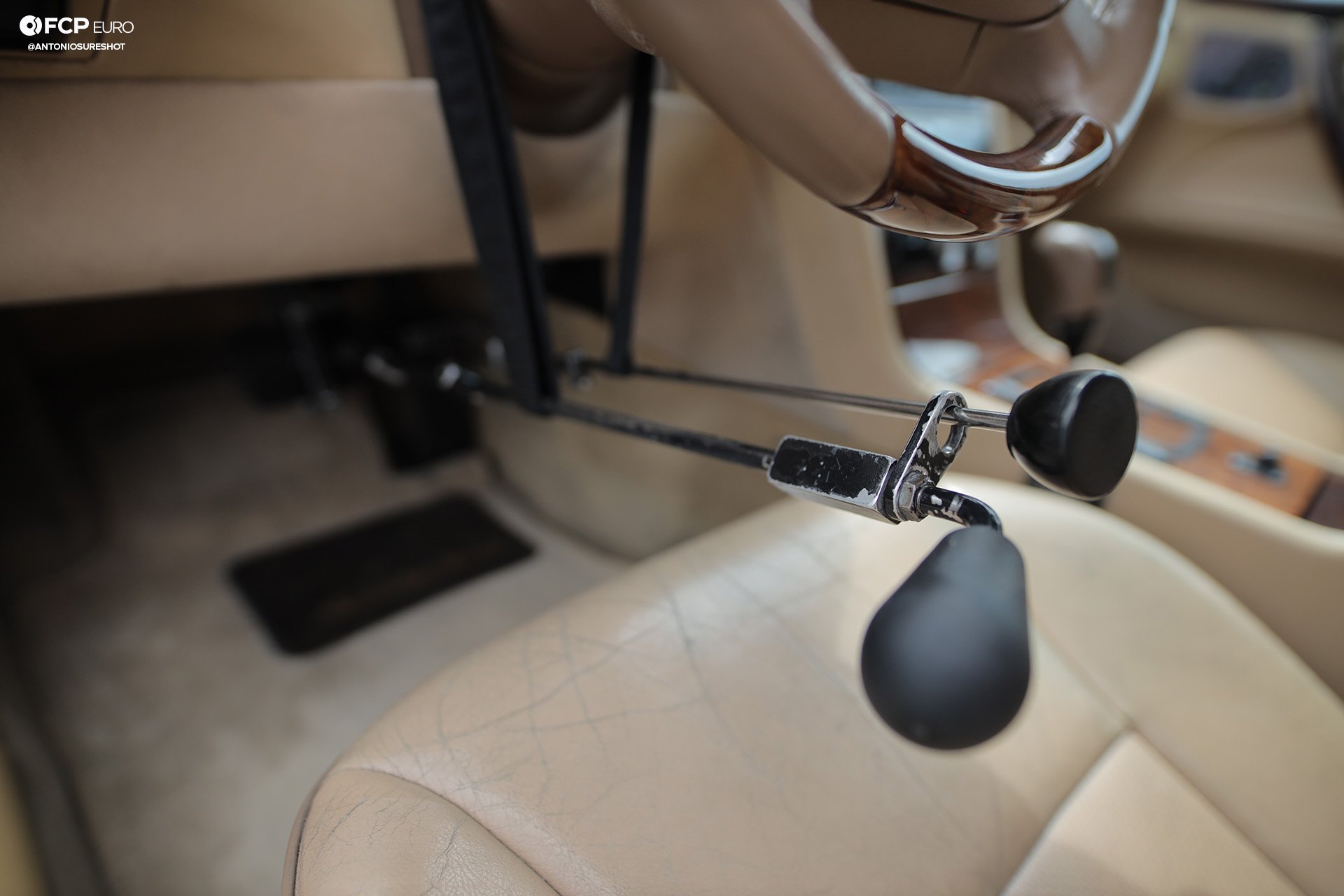 Despite not having use of his legs, David is still able to drive this Estate by using these portable hand controls. The left knob controls the brake pedal and is used with your full hand. The right knob initiates the accelerator by pressing your thumb down, then rotating the entire unit towards the right. The strap just helps hold it in place. This is designed so that it can be removed from the vehicle and used in another while also meaning that the vehicle doesn’t need to be made specifically for it. In most cases, these hand controls are permanent and can require extensive modification to the pedals, steering wheel, and column. 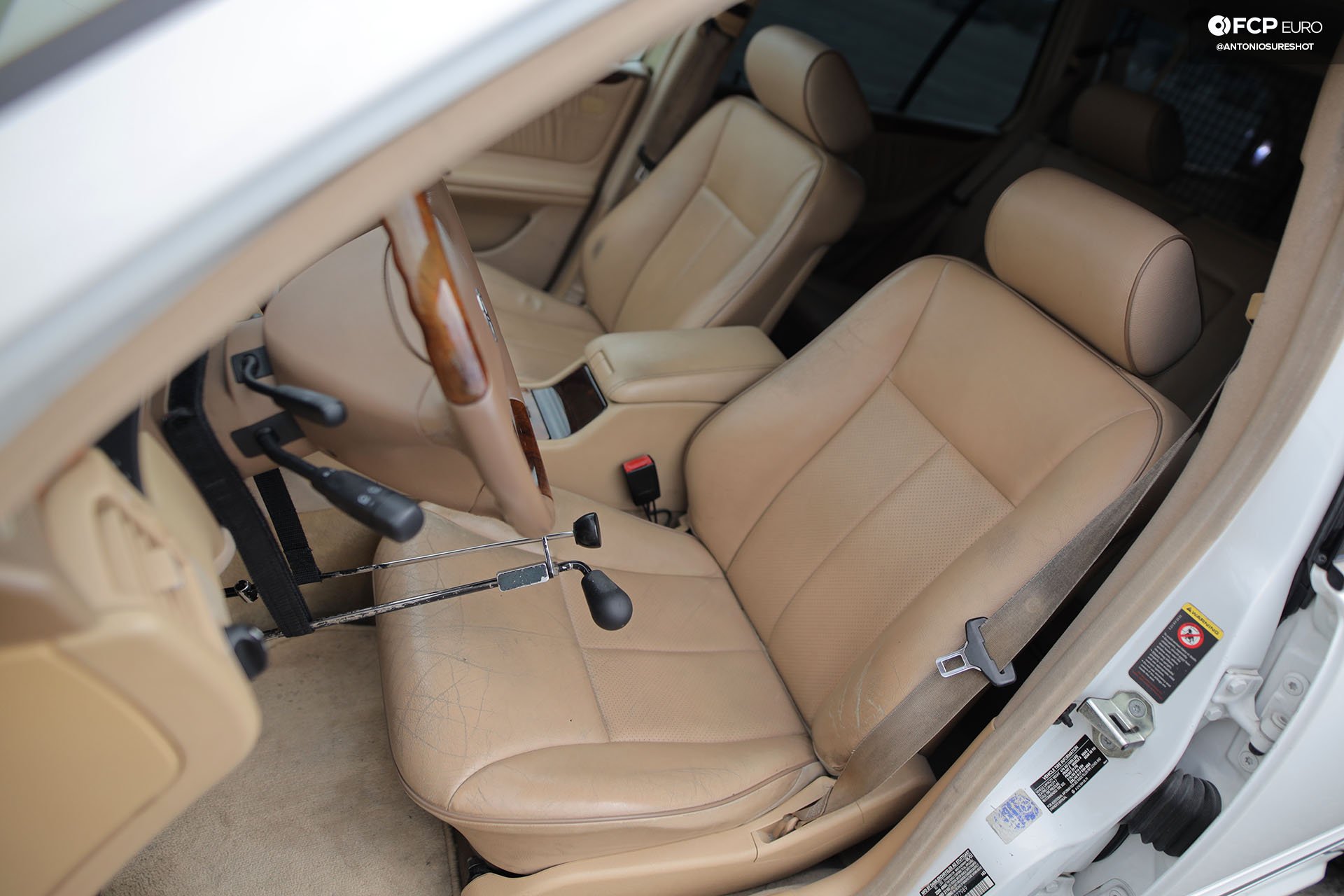 However, that’s it as far as assistance goes. The seats are factory Mercedes and are original to this E320. 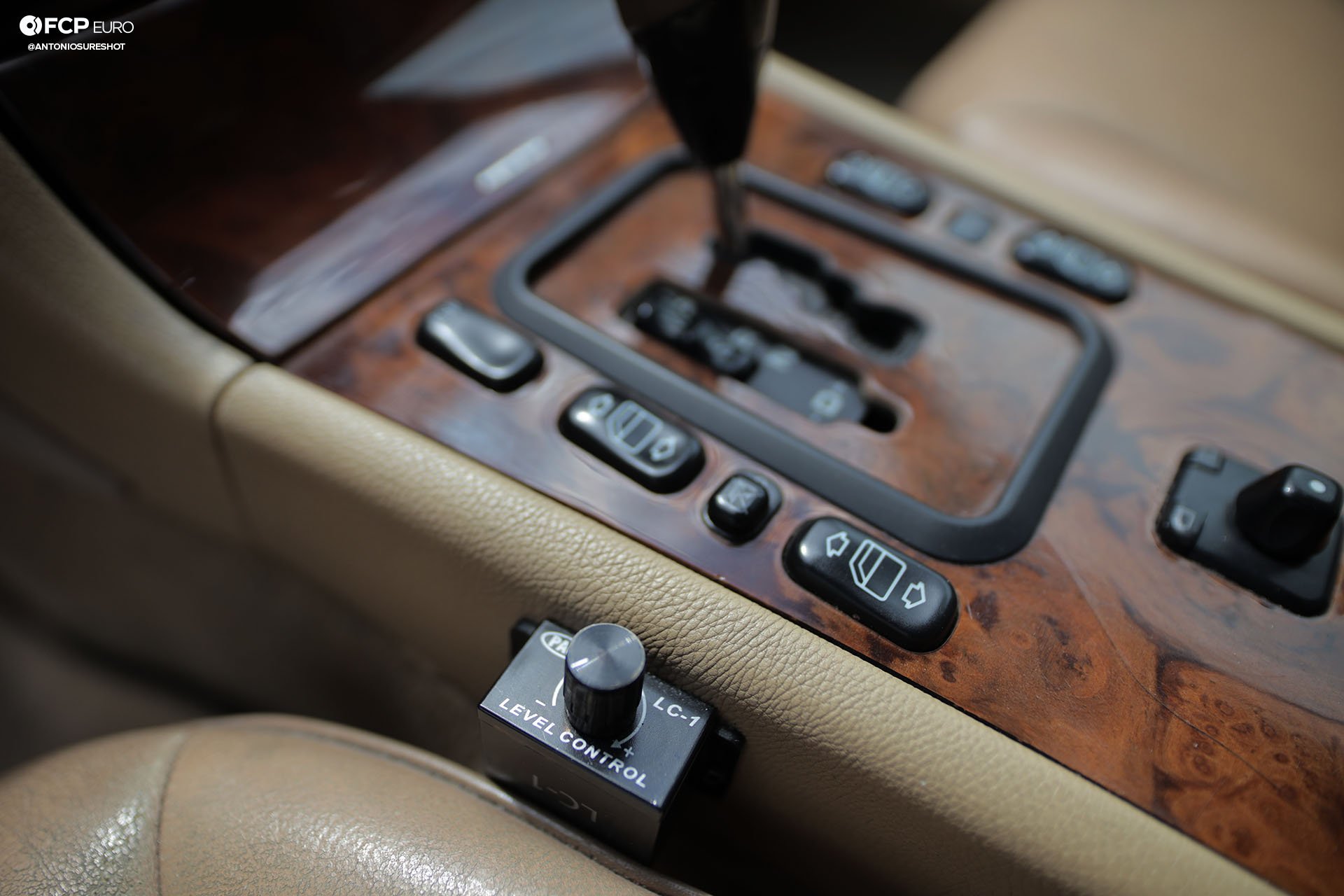 If you’re not much of an audiophile, you probably assume the “level control” is for the suspension. However, its all for the control of the Pioneer SW2002D2 eight-inch subwoofer, which receives extra power from an Orion Cobalt 800-1 monoblock amp. 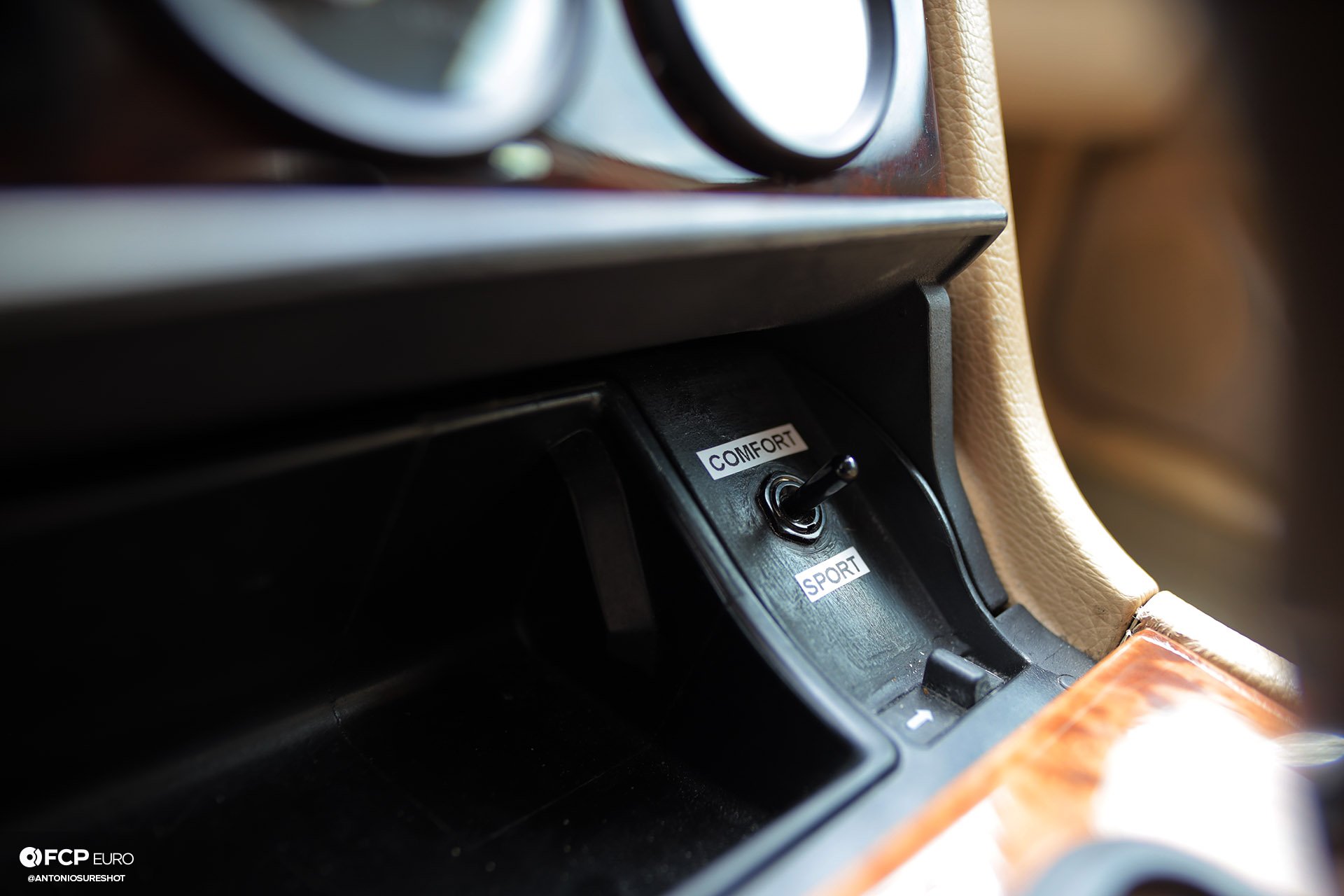 The exhaust features a cutout and is controlled via this switch, which is where the cigarette lighter used to reside. 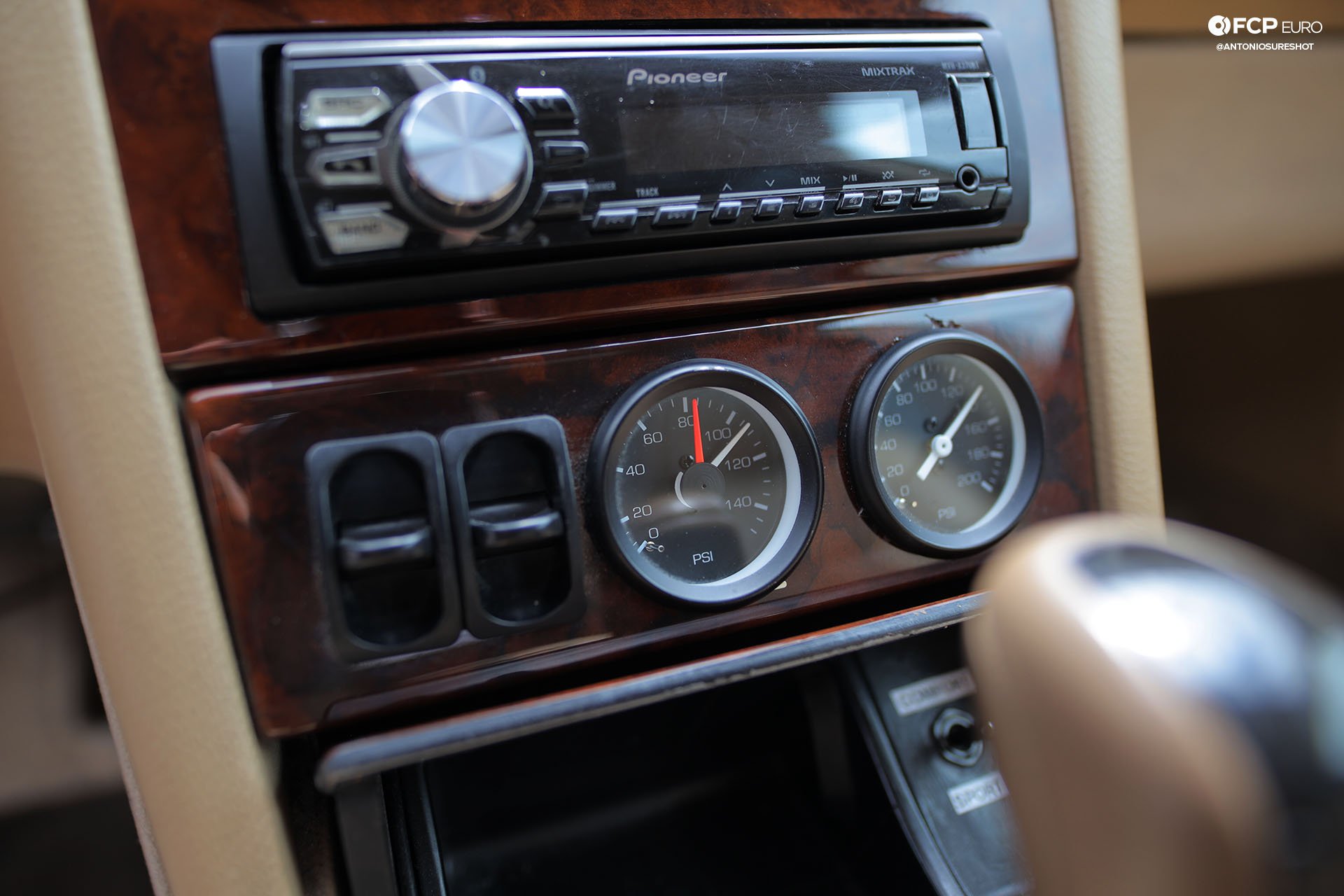 The audio mentioned earlier gets its signals from the Pioneer MVH-X370BT Bluetooth head unit, and the single DIN size is perfect for replacing the OE Mercedes stereo unit. A pair of Air Lift Performance paddle valves, set to the left of these EXTA dual (each needle indicates each axles bags) and single (tank pressure) needle analog pressure gauges, control the pressure sent to the bags for manual ride control. However, the air ride management controller usually monitors and adjusts the pressure automatically, without David’s input. 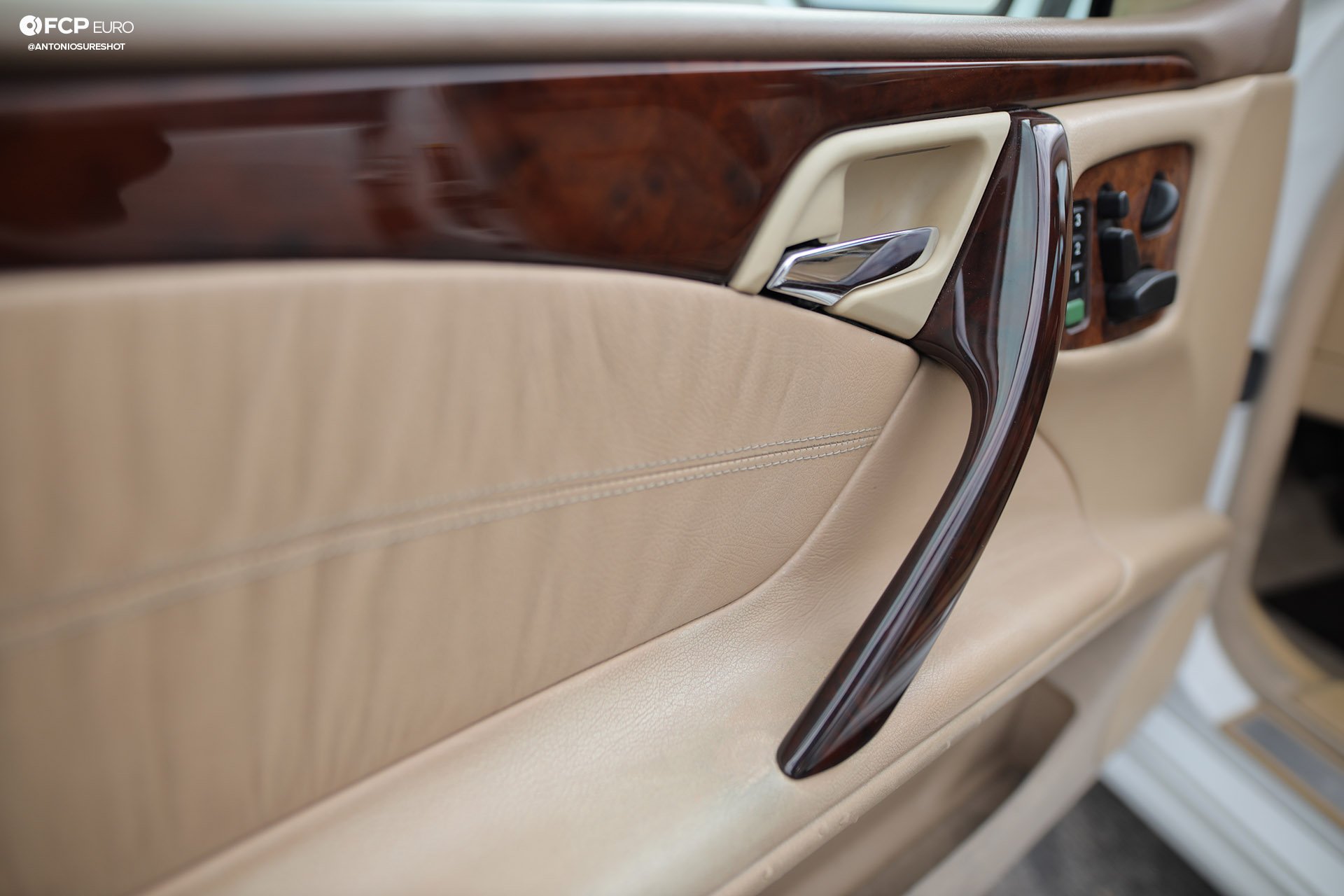 The doors haven’t had much done to them, but a set of Renntech burlwood door handles work well to complement the rest of the wood trim of the Estate. Inside those panels, though, are JL Audio C2 Component Speakers which are matched in the rear doors, as well. 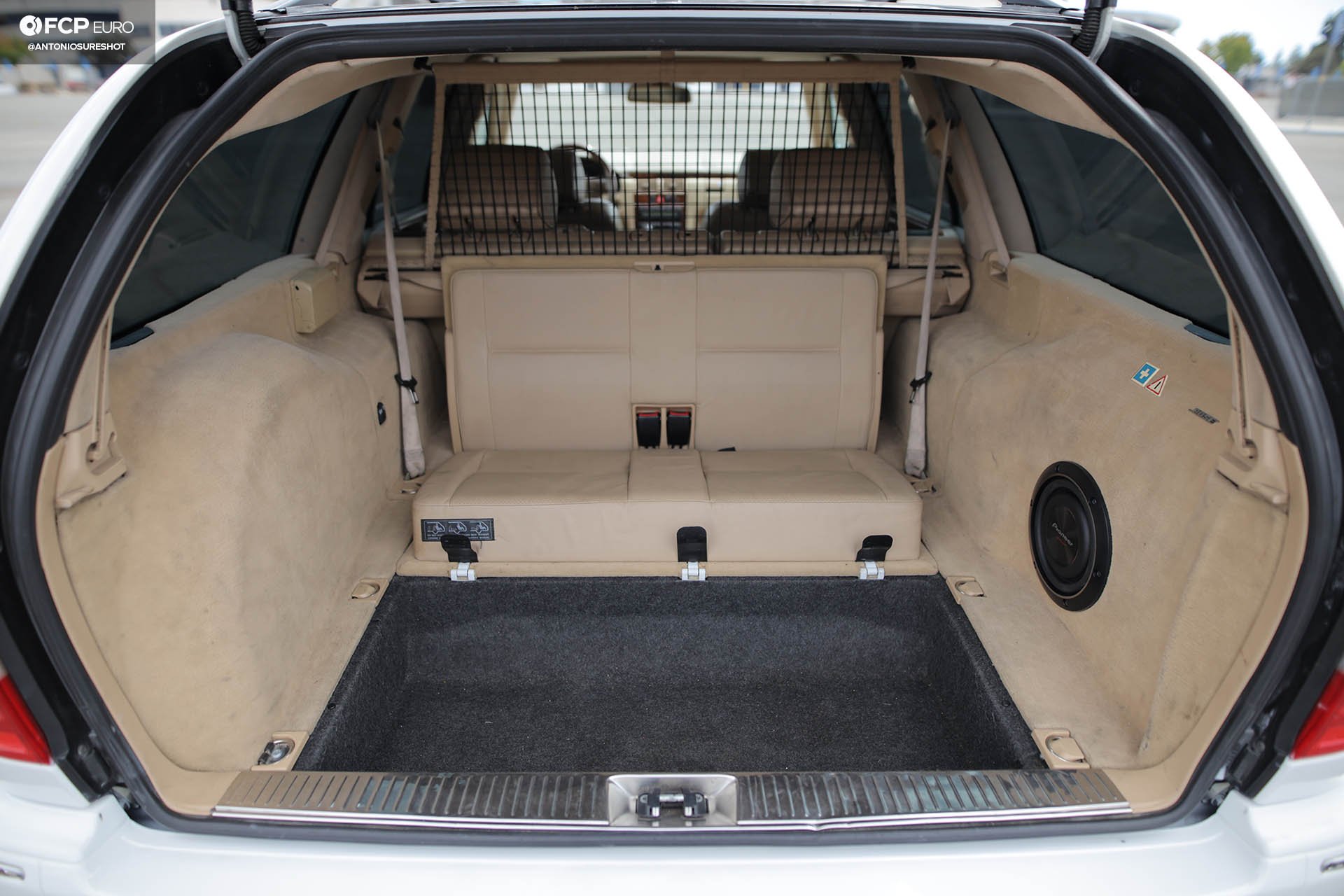 The great thing about the estates built by Mercedes Benz is how much room you have to install parts and have them hidden away. You wouldn’t suspect that the subwoofer and amp were installed in that right quarter panel. You can’t even see the Viair 444c air compressor back here, nor know where the Air Lift Performance five-gallon air tank was hiding. Those are under the left quarter panel where the spare tire used to reside. 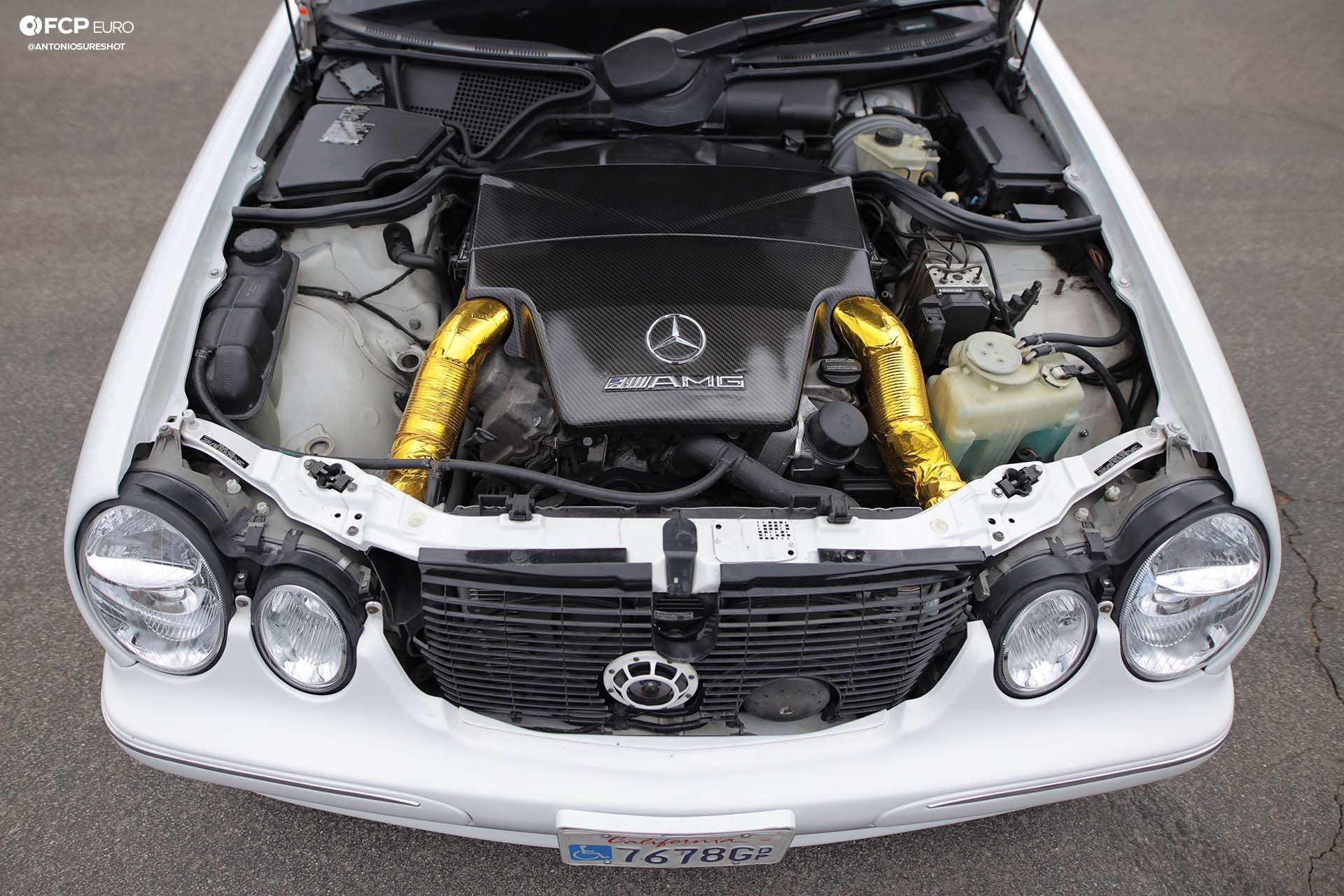 The engine and transmission came from the Mercedes-AMG E55 and is a full swap from head-to-toe, so to speak. As mentioned earlier, it needed to be. “My original plan was to dismantle the E55 AMG sedan and swap everything over including all of the ignition modules, related relays, and necessary electronics to make the car work,” said David, “I knew that these Mercedes used DAS2 immobilizer technology to run.”

Even then, it still wasn’t a straight swap. He goes on to explain, “However, once the engine and trans were pulled, I found a mismatch in wiring harness types between my donor car and my wagon. This would lead me to have to change the donor V8 engines upper engine harness to the later Bosch ME2.8 from the earlier ME2.0. This also meant needing an all new ECU, TCU, and coil packs, most of which I was able to find from a crashed 2001 S55 AMG... and actually, I ordered new replacement coil packs from FCP Euro once I learned about their Lifetime Replacement Guarantee.” 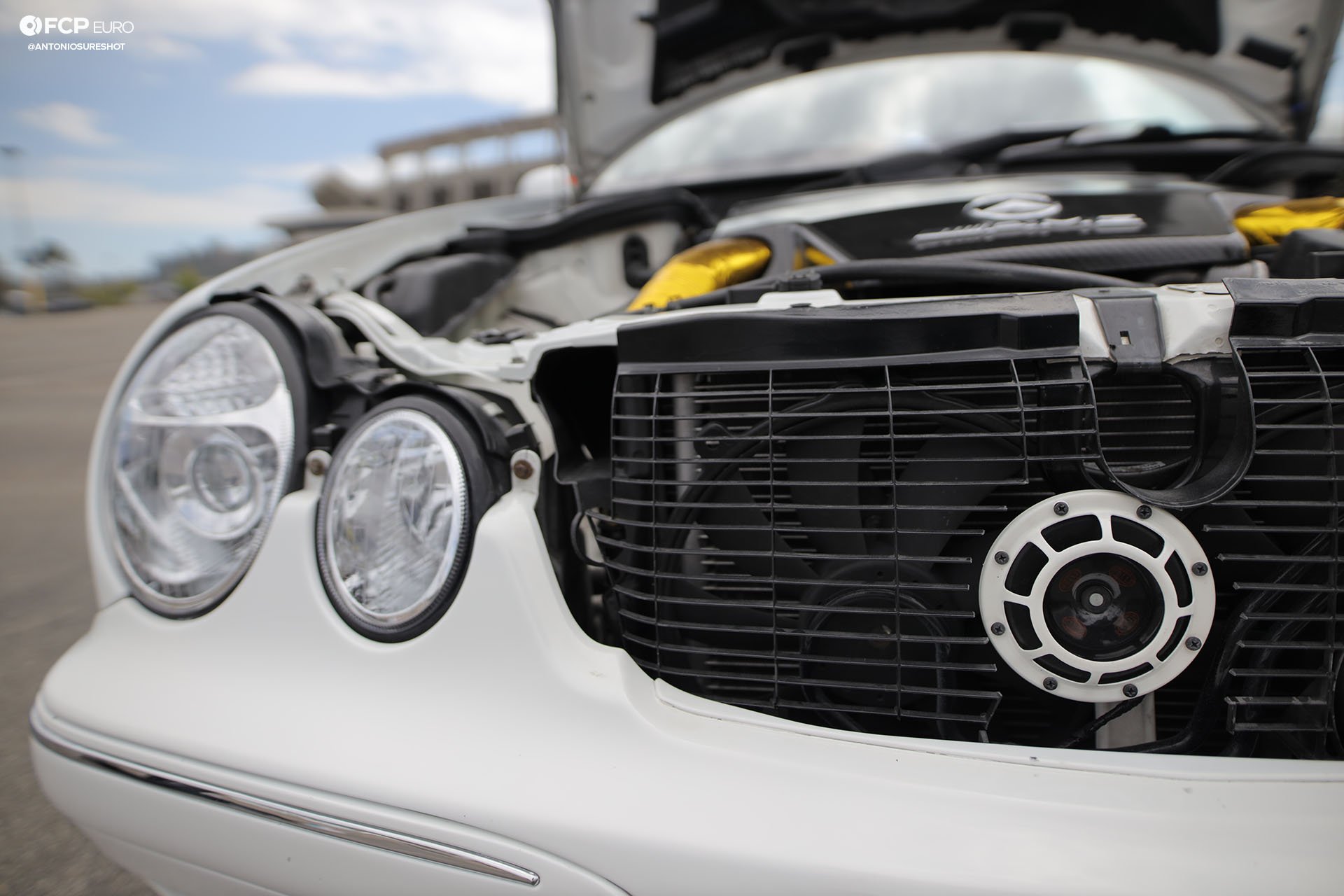 If you want to make sure you’re heard by a person randomly walking across the street with headphones on, you need a really loud horn. You can’t get anything better than a Hella Supertone horn until you go up to air horns. 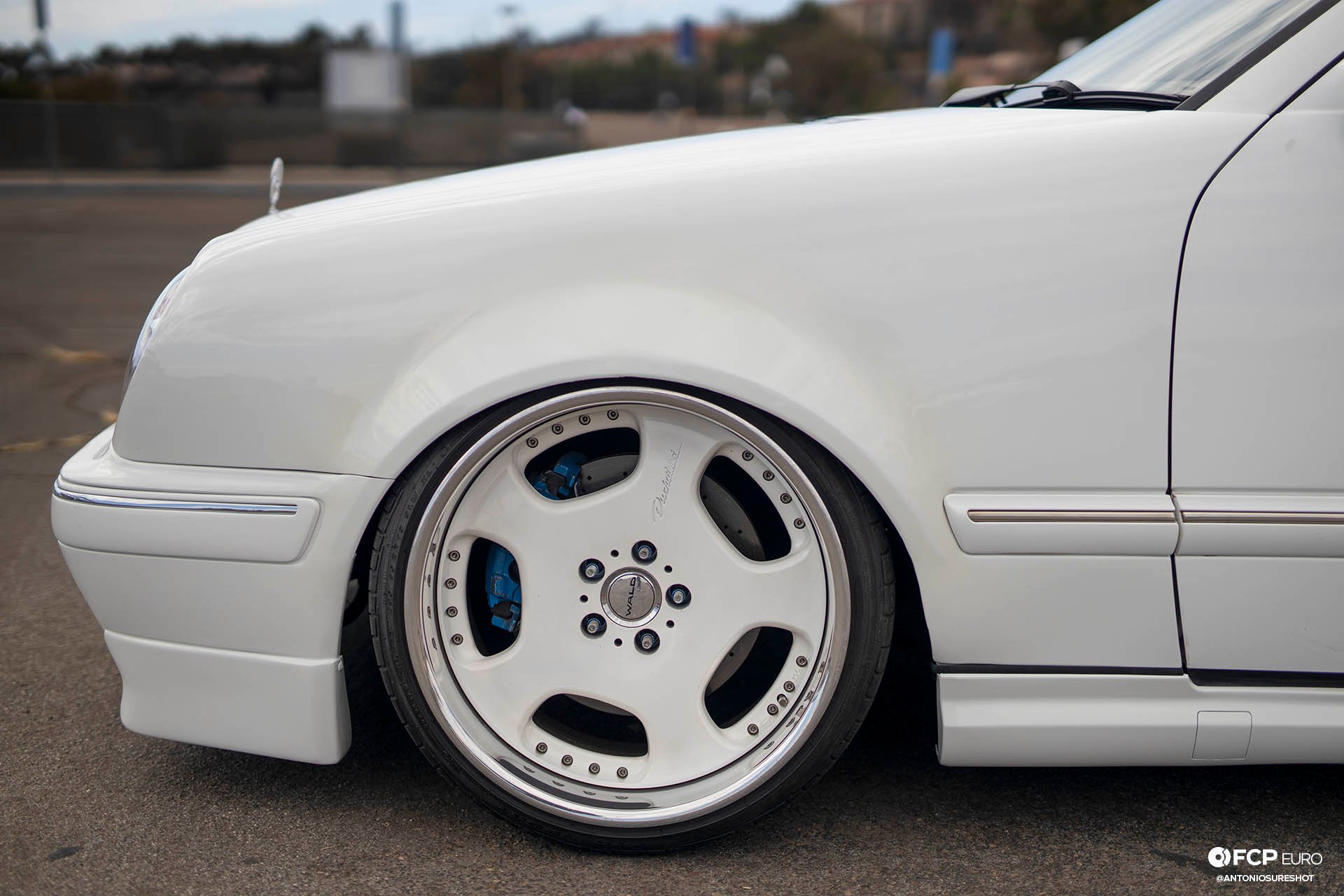 The calipers hiding under those wheels are Mercedes W210 E55 AMG parts with Stoptech Sport Drilled rotors in the front measuring out to 334mm. The rear rotors are AMG 300mm units, but Akebono Euro Ceramic pads clamp down on them with little dust or noise. 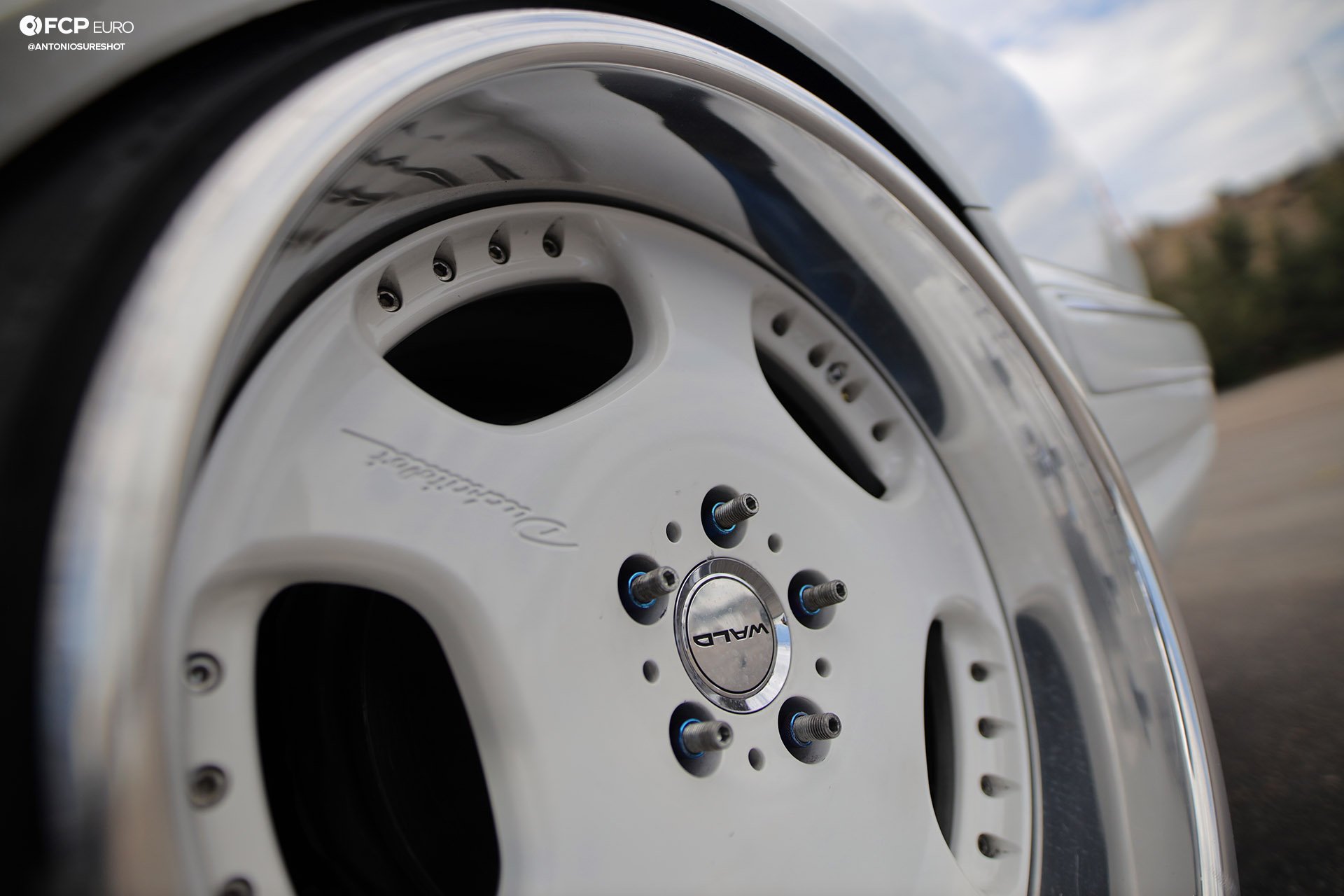 Finally, lug bolts have been tossed away for a set of H&R Quick-Safe studs that are 90mm long in M12x1.5 thread pitch. This allows the Muteki SR48 lug nuts to be used instead. 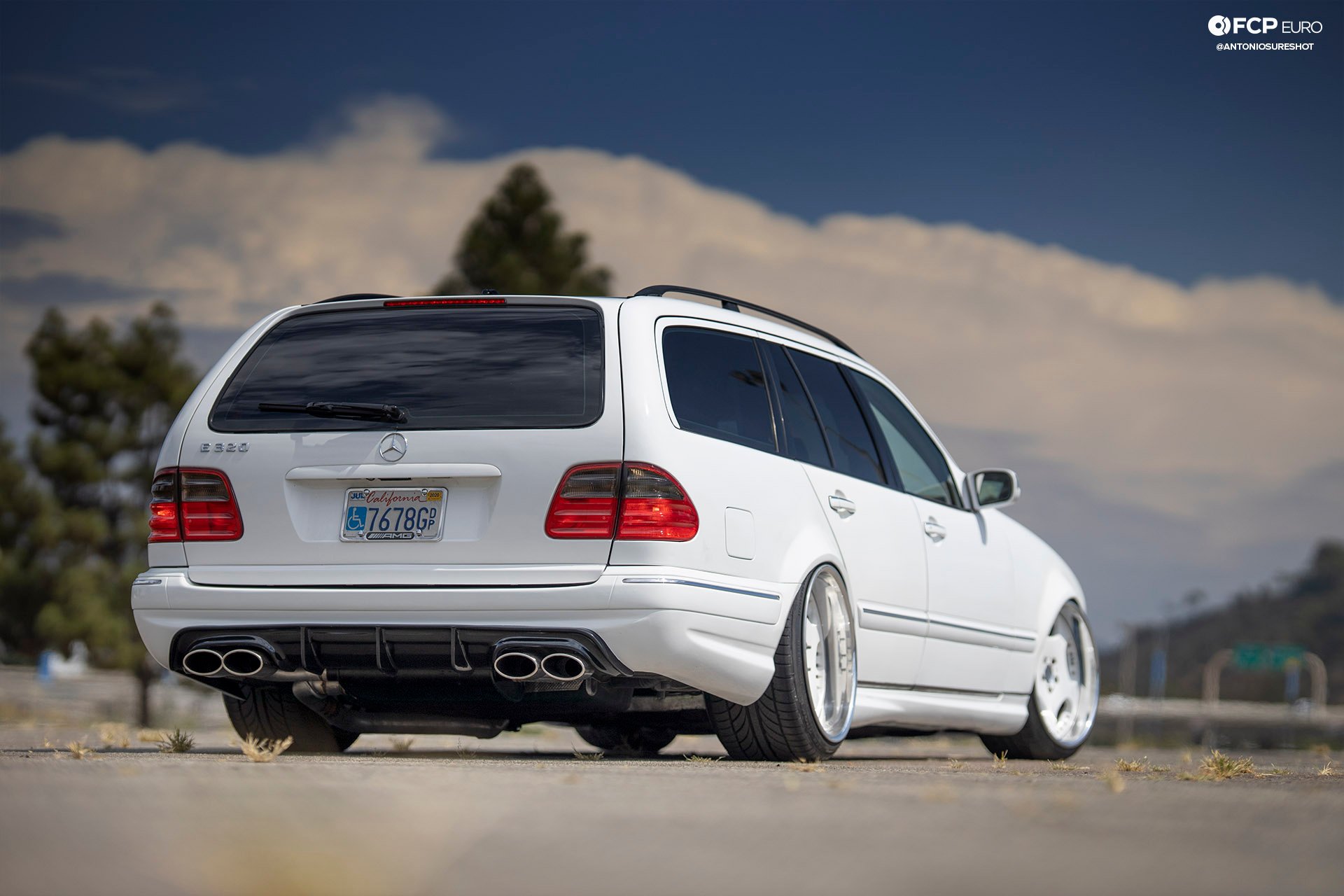 Once you close that hatch, you begin to realize just how clean this Estate really is. You start to notice that there are different parts added to this E320, the smoked AMG taillights are kind of given. Then you see that the rear diffuser looks like something from the W211, but that wouldn’t make sense with the W210 AMG rear bumper. It’s been molded to fit the AMG bumper. 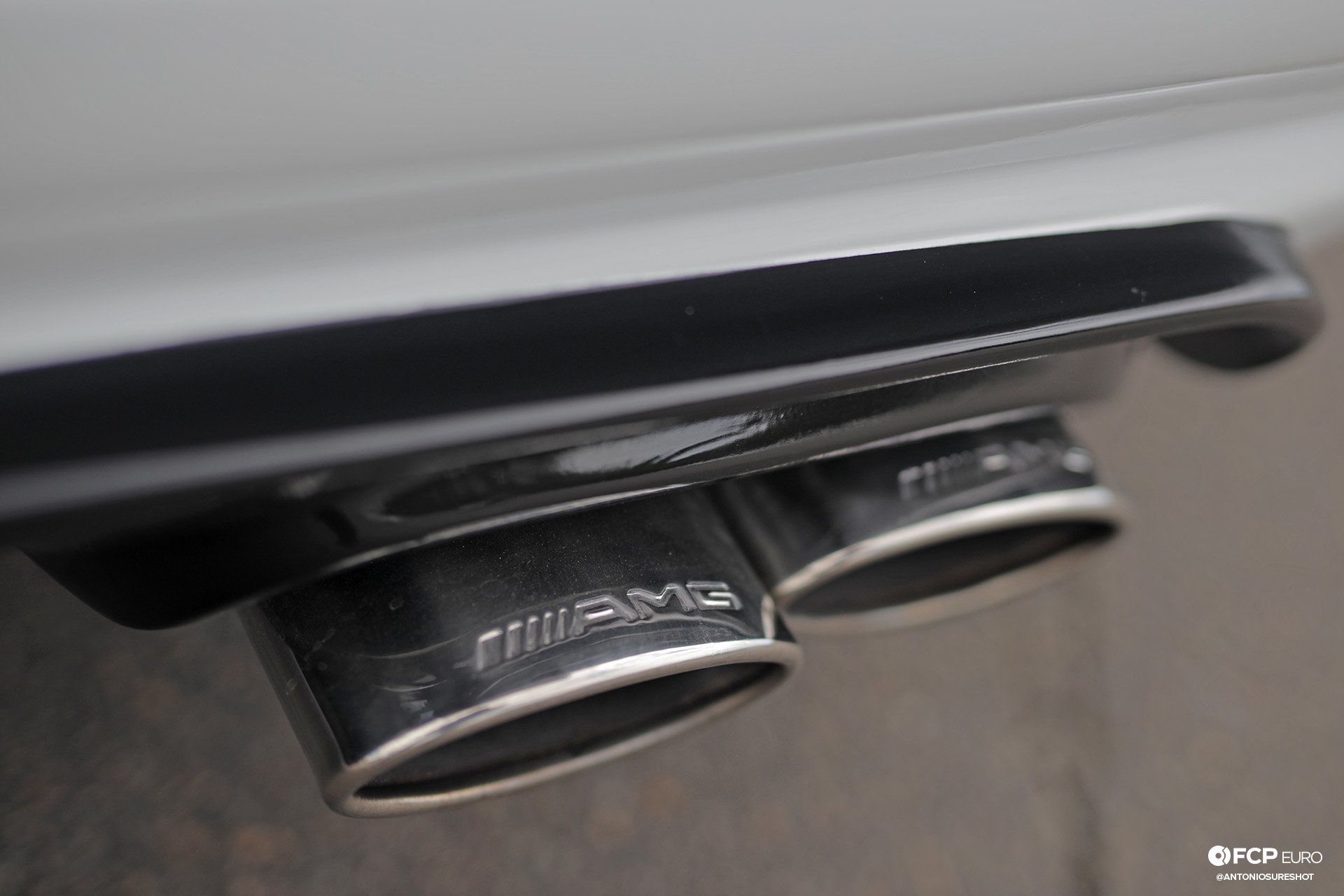 Then you see that those quad exhaust tips are AMG parts yet fit so well to the rear diffuser bumper. 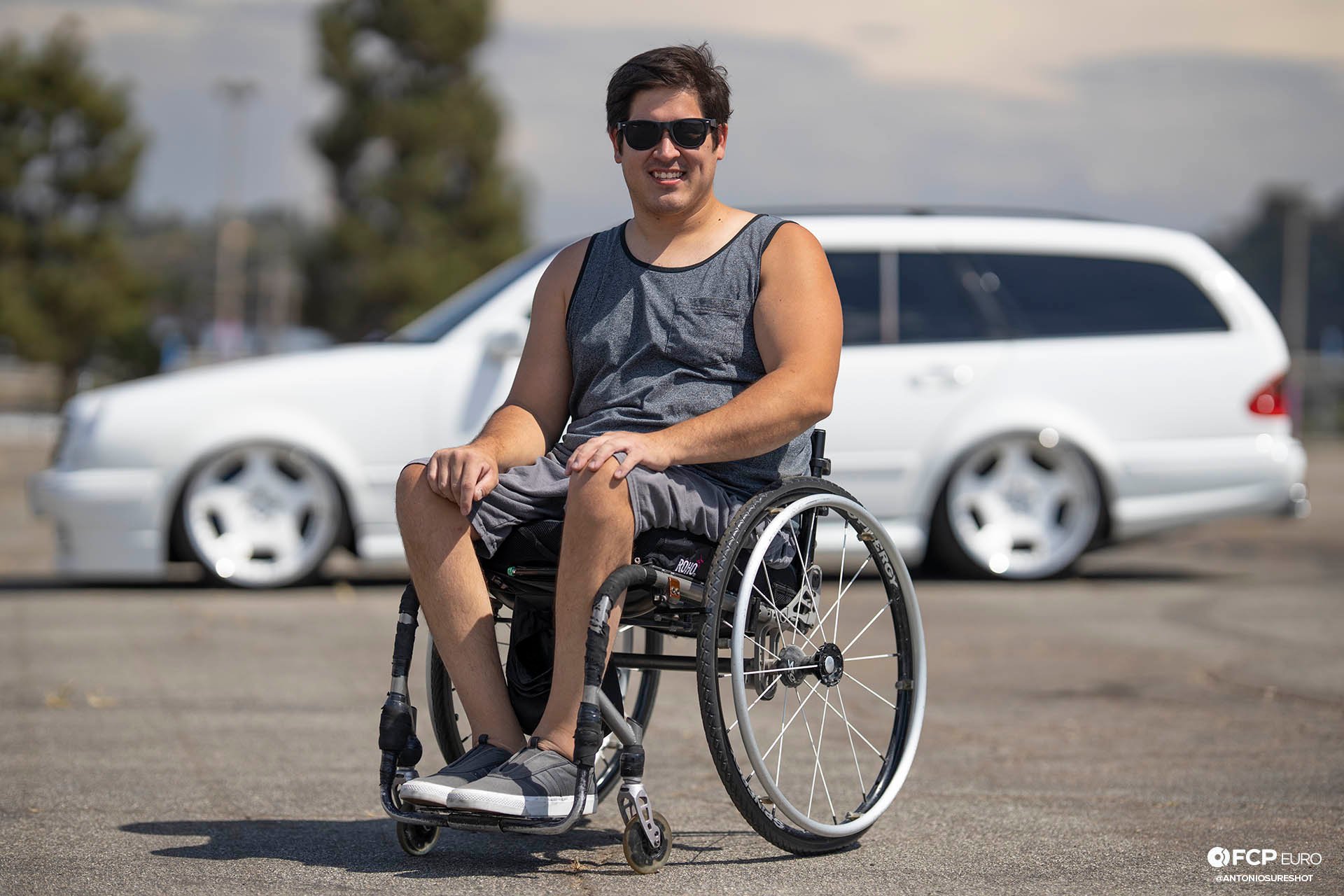 However, its what you haven’t seen yet that truly doesn’t click together yet. David, while strapped to this wheelchair, built this car in his garage. The paint, bodywork, swap, all of it was done by him. There are people who are probably reading this article right now, who would pay someone to do all of this for them. Who would most likely give up the moment they face a small challenge like the harness issues he ran into.

Even with those challenges, he’d still do it again. “Absolutely would do it all again. However, knowing what I know now about AMG swaps and how to find donor cars for cheap through salvage auctions, I would likely buy a later model AMG donor car that would have come with the M113K 5.4L Supercharged V8 variant for the swap. But it would not be generation correct for the MB purist out there. Mine currently is all generation-correct swap.” 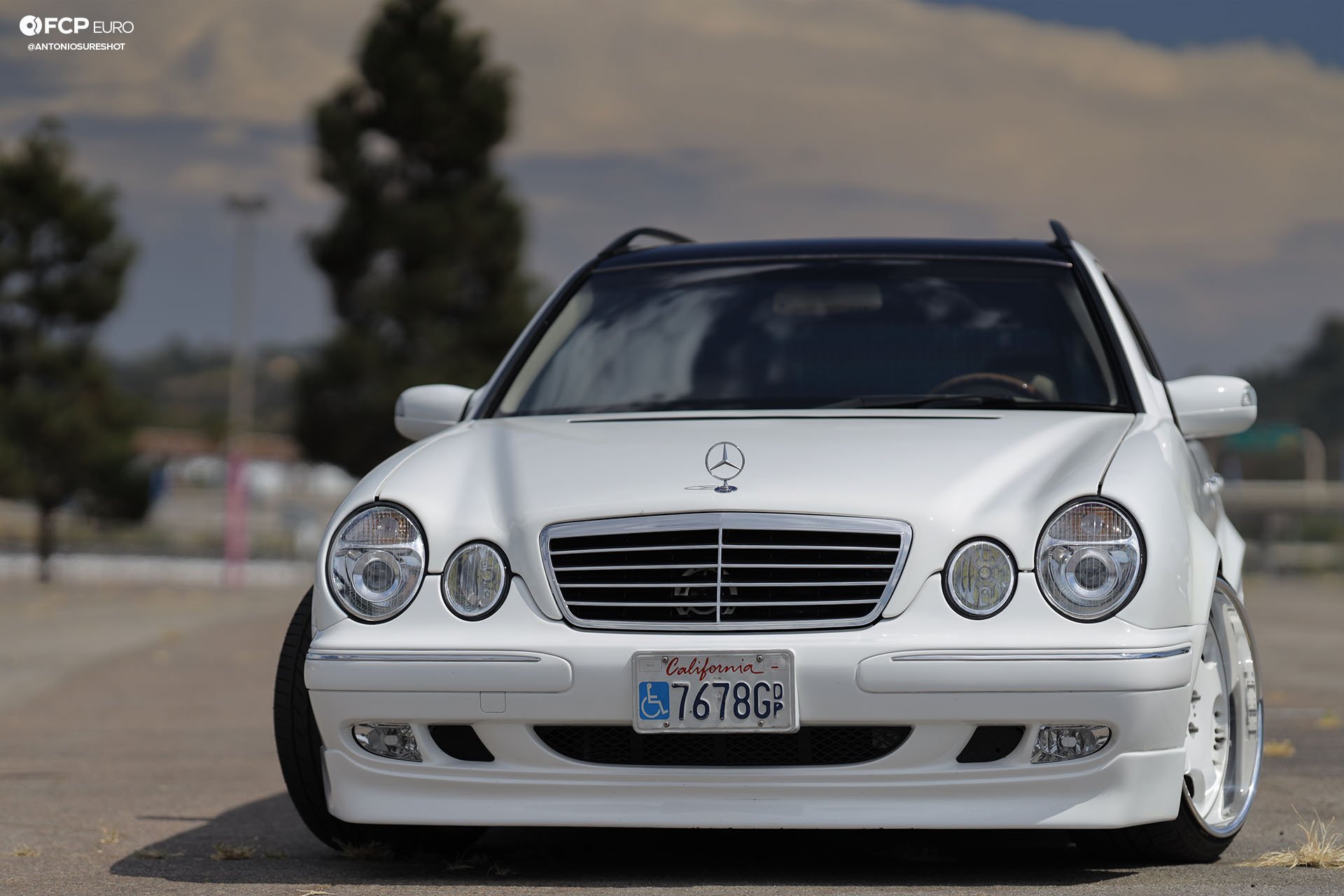 Despite all of that initial hardship of the build and being in a wheelchair, this estate came out like someone did this for a profession. This is just his hobby as he works as a real Estate agent full time. “The biggest enhancements that made the most contribution were the complete E55 AMG drivetrain swap as well custom metal widebody fenders,” said David when we asked what he had the most pride in with this build. “While these may not seem like much to many, these were performed as a DIY garage project of mine. I’m not a car builder by trade,” David explained, “It’s a driver and not built to be a show car, too.” 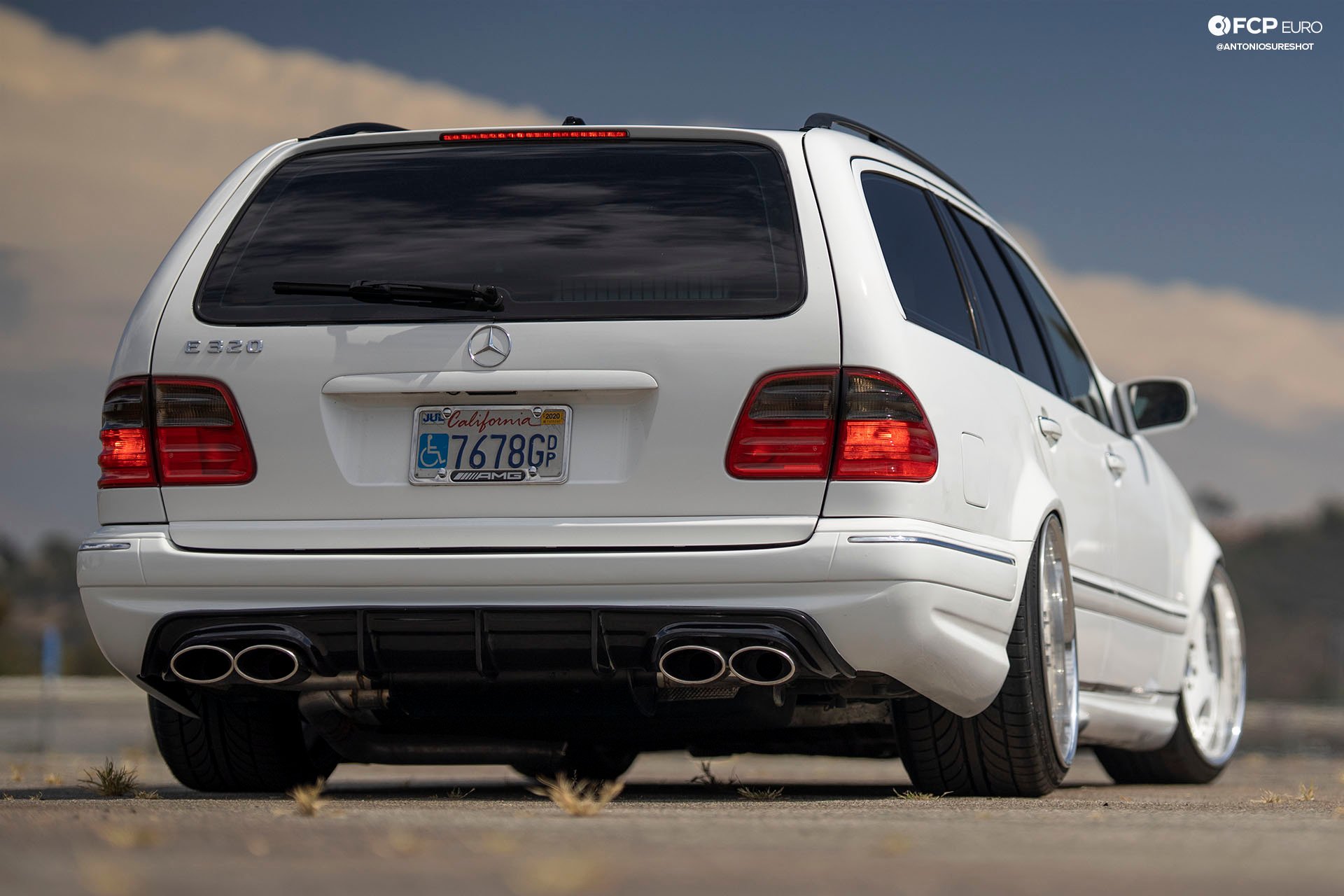 Even if it wasn’t built to be a show car, his work has still paid off. He’s taken the top three at the 2017 Wuste European Car Festival in Las Vegas and Best Custom Mercedes at the 2017 Mercedes Benz Exklusive Show in Long Beach, CA. The real reward, though, aren’t the accolades. Its show that no matter what has happened to you in your life, there isn’t an excuse to give up. If you ever feel that way just remember that David built this car while forced to be in a wheelchair.

If you like this Mercedes-Benz E320 Estate, you can find additional Mercedes-Benz content at mercedes.fcpeuro.com, as well as more build features like this one here. If there's anything specific you would like to see, or if you have any questions/comments, leave them in the comments section below.