Modified Volvo builds are a rare breed, but this 940 Turbo Wagon goes even further with its lifted suspension and 30-inch off-road tires.

When it comes to unique and modified cars in the US, you can’t get more distinctive than a Volvo. It’s a brand known for safety here in the States, and isn't typically connected with a deep history of racing—at least not as deep as BMW and Mercedes-Benz performance cars. We realize that Volvo race cars do exist, and can certainly recall the days of Volvo’s ice racing or touring car racing history, but Connor Lopes’ 940 Turbo Wagon went in an entirely different direction altogether out of need. He went with a lift and a set of off-road tires in an overlander-style build. 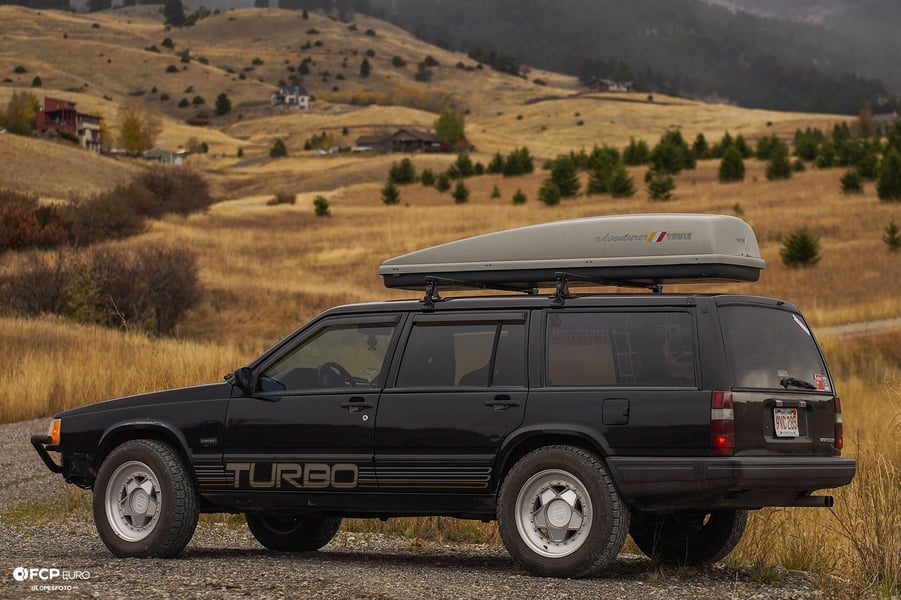 “I purchased my Volvo wagon in July of 2018,” said Connor, “It was a one-owner car from Arizona, and the owner before me drove it back to his home in Maine.” Once that owner reached his home, he decided he wanted to concentrate on his other cars instead and sold the 940 to Connor. “I was looking to buy a station wagon that I could use to haul all my belongings from my home to my school, Montana State University.” He then decided to sell his Toyota pickup and a Volvo C70 T5M and purchased this wagon with the money he raised. 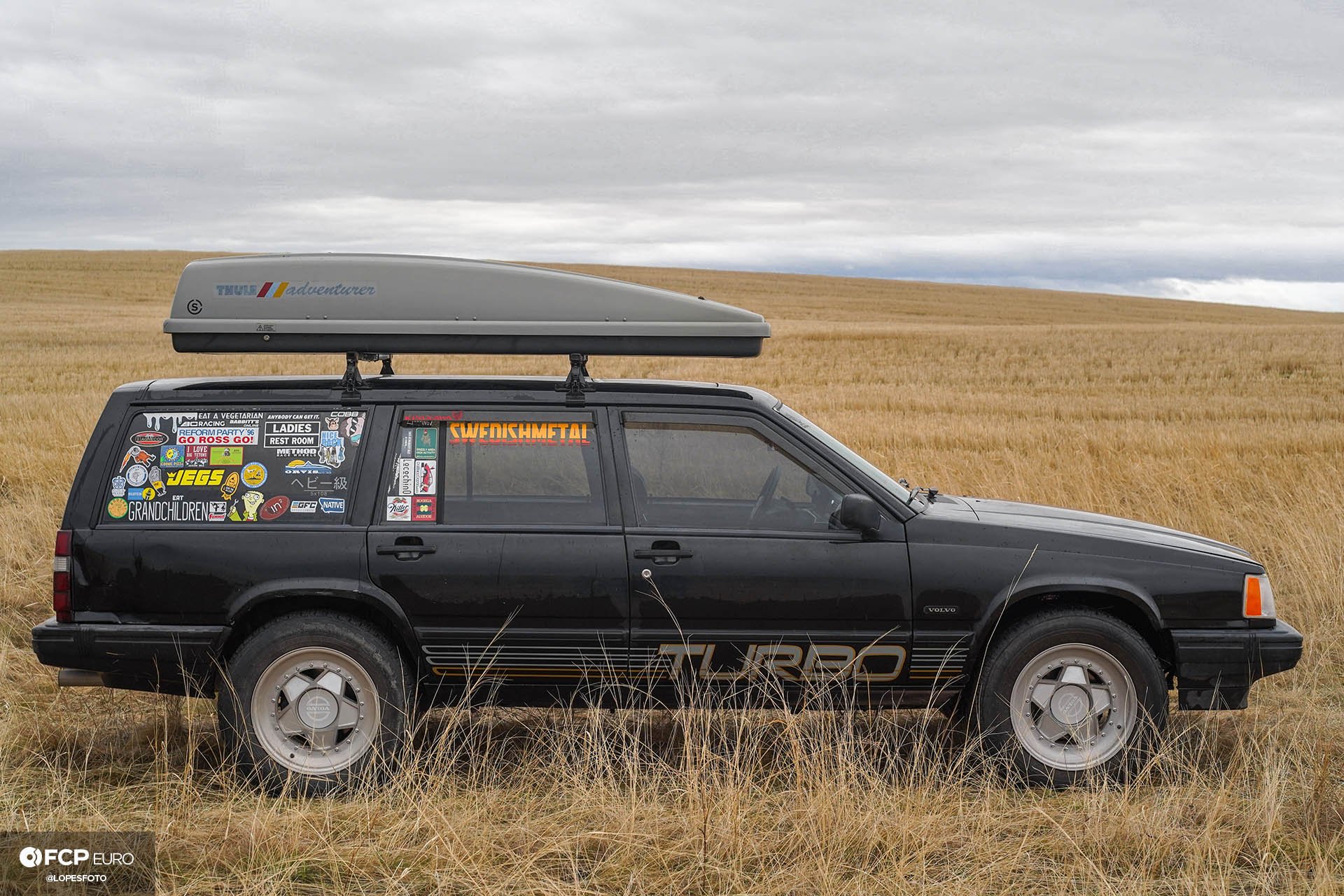 It actually started out in a "pavement performance" direction at first, as it had lowering springs and HRE wheels with low-profile tires. In fact, the parts were all installed within a week of his purchase. However, upon reaching Montana, Connor realized two things: he missed having some off-road capability his pickup had, and many of the roads were not friendly to a lowered car.

“One day,” explained Connor, “I decided to drive up Livingston Peak Road. As it got bumpier and the ruts got deeper, the exhaust scraped on the ground more and more.” He decided this wasn’t going to work and began to figure out a way to lift the 940 Wagon without degrading its performance. 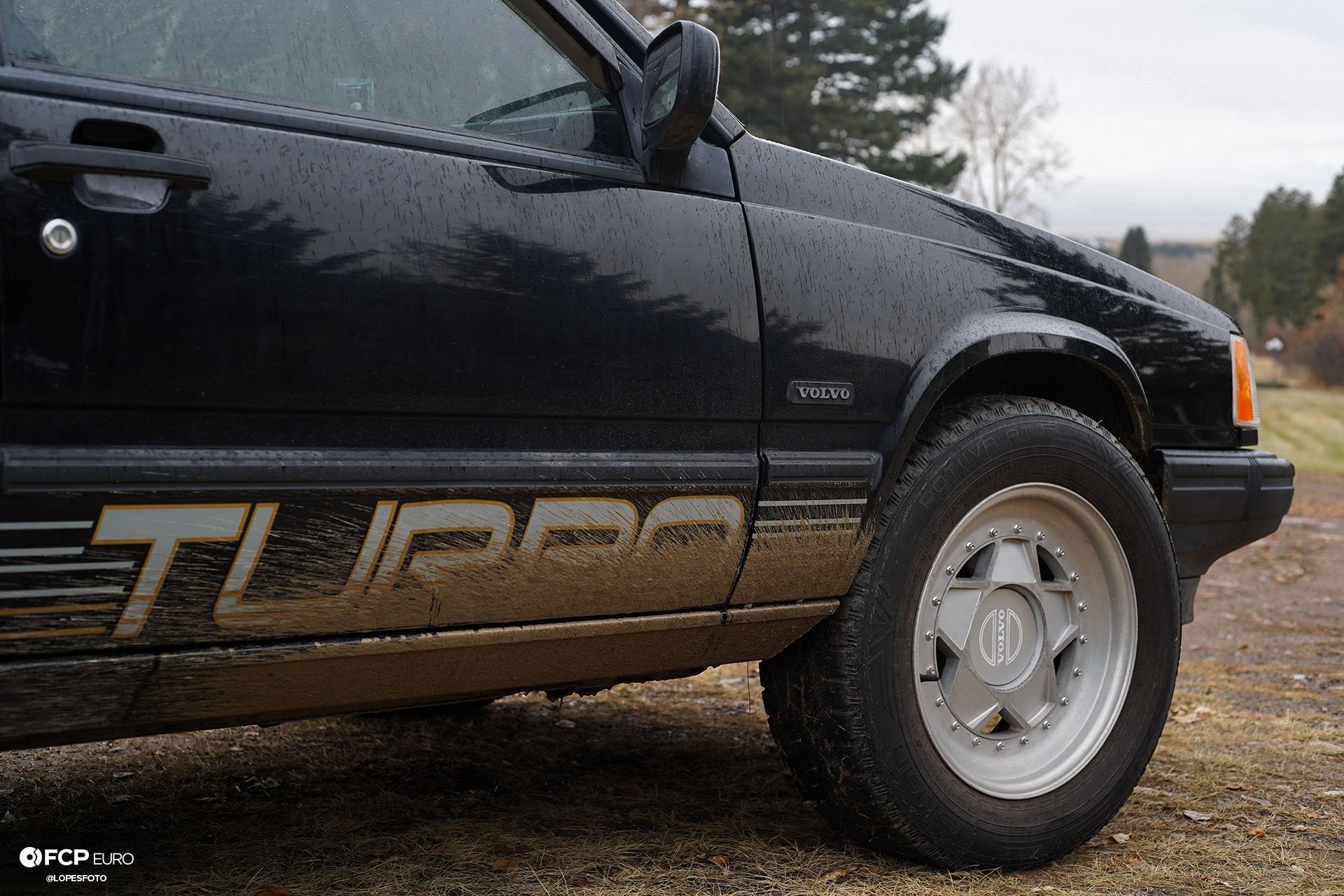 First, the suspension needed a lift, but it needed more than just a return to stock height. It needed to be higher than that. He didn’t want to use spacers to achieve the lift, as many other overland-style cars do. Connor purchased a set of BC Racing Coilovers for the front end and set it as high as he could get it. For the rear, he used a set of IPD overload springs with Bilstein Heavy-Duty shocks meant for the Dodge Dakota. For additional rear lift, he also used BC Racing adjustable spring seats that are mounted to the rear axle as well as an IPD adjustable Panhard bar to keep the axle centered to the chassis.

Yes, those are HRE 505 wheels in 17x8 +10 sizing. This is a fitment spec originally meant for the Ferrari 308 GTB. Interestingly enough, the Ferrari 308 and the Volvo 940 Wagon both share the same bolt pattern. However, instead of skinny summer tires, the 940 wears a set of Nokian A/T all-terrain tires in 245/65R17. It’s a metric equivalent to a 30-inch diameter tire and perfect for off-roading. It also uses a set of rebuilt Volvo calipers, but uses Brembo rotors and Brembo brake pads for improved stopping performance over the stock pads and rotors.

Another important part to have on any off-roading vehicle is a locking differential. For Connor’s 940 Wagon, he chose the Eaton G80 MLocker mechanical auto-locker. It detects wheel-speed difference–usually around a 120-RPM difference–by use of a centrifugal pawl mechanism that’s rotated by the cam plate. This mechanism acts as a governor and is why the G80 also has the unofficial name, “Gov Lock.” 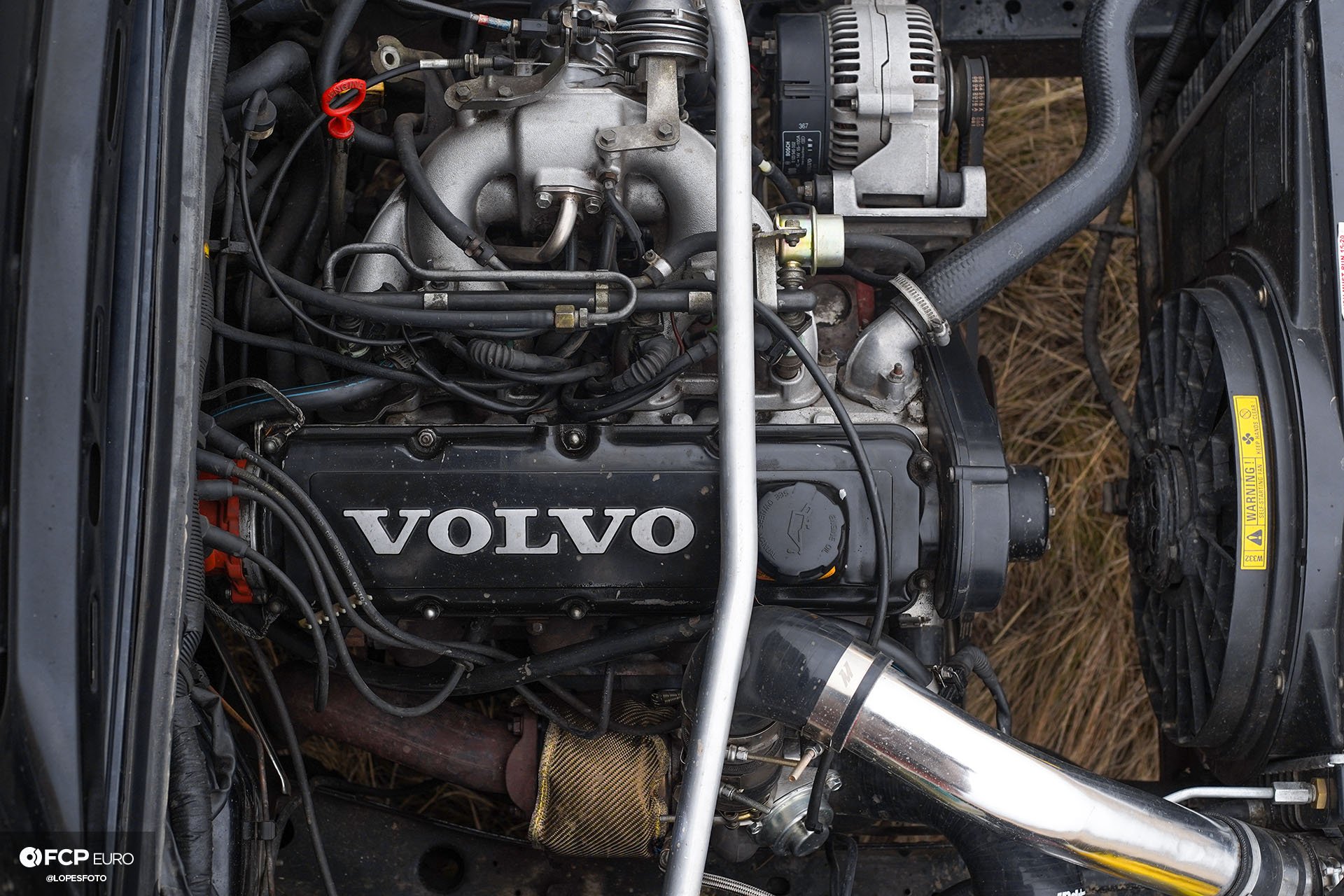 If you’re going to go off-road in Montana, you need some extra grunt to tackle the mud and snow you’ll eventually encounter. That and finding a way to make up for the lack of air at higher altitudes. So, the B230FT 2.3-liter engine has a turbocharger upgrade. The original snail is swapped out for a TD04-19T with a DO88 front mount intercooler and 2.5-inch diameter charge piping. 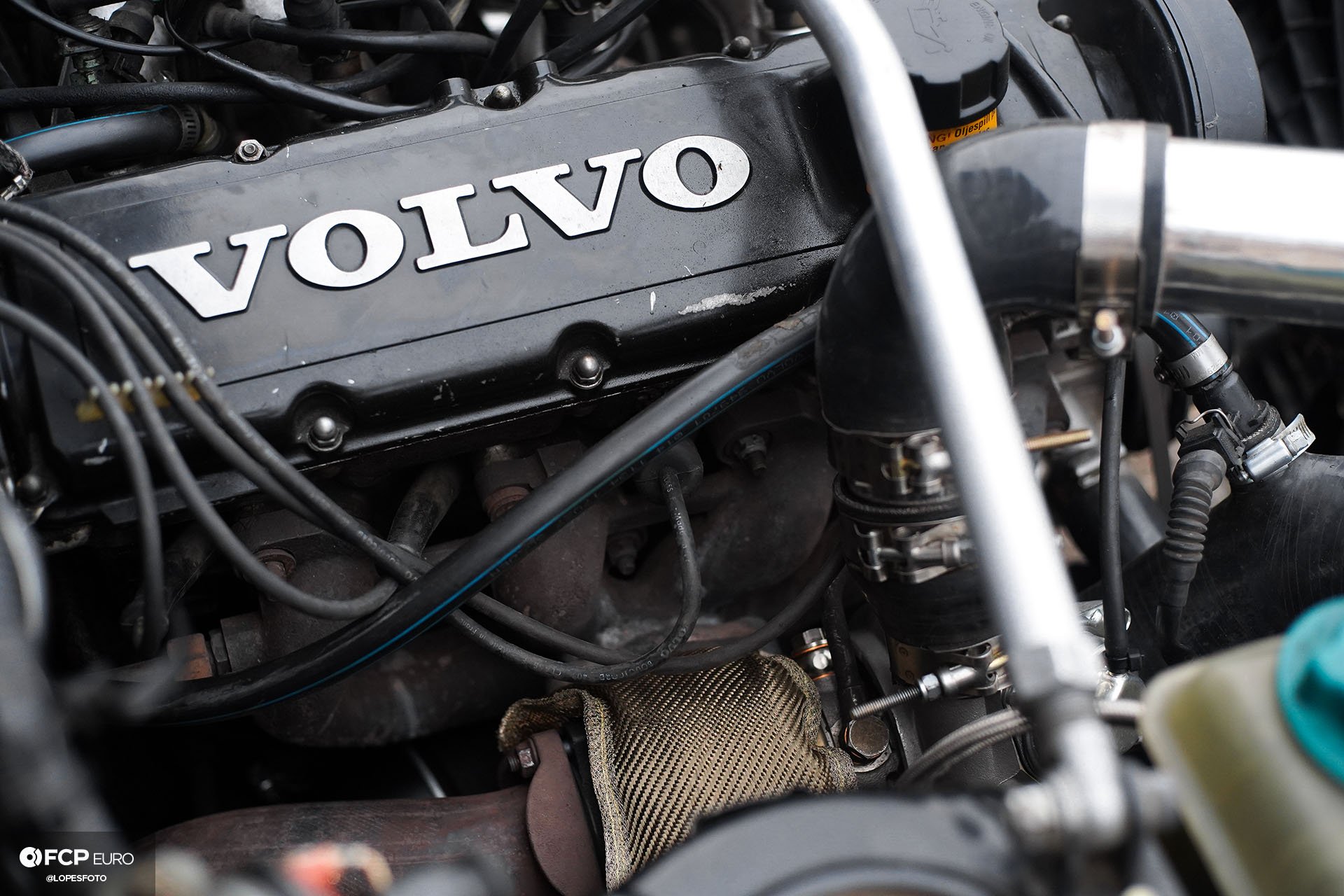 The ambient air is sucked into the turbo through an AEM Intakes Dryflow filter attached to an IPD silicone intake. The spent air is then shot out of a 2.5-inch turbo-back exhaust system with a Flowmaster Super 44 muffler. A manual boost controller keeps the wastegate closed until it hits 11.7-PSI.

You might also notice the RSI strut tower brace just over the engine that's there for additional front chassis rigidity. 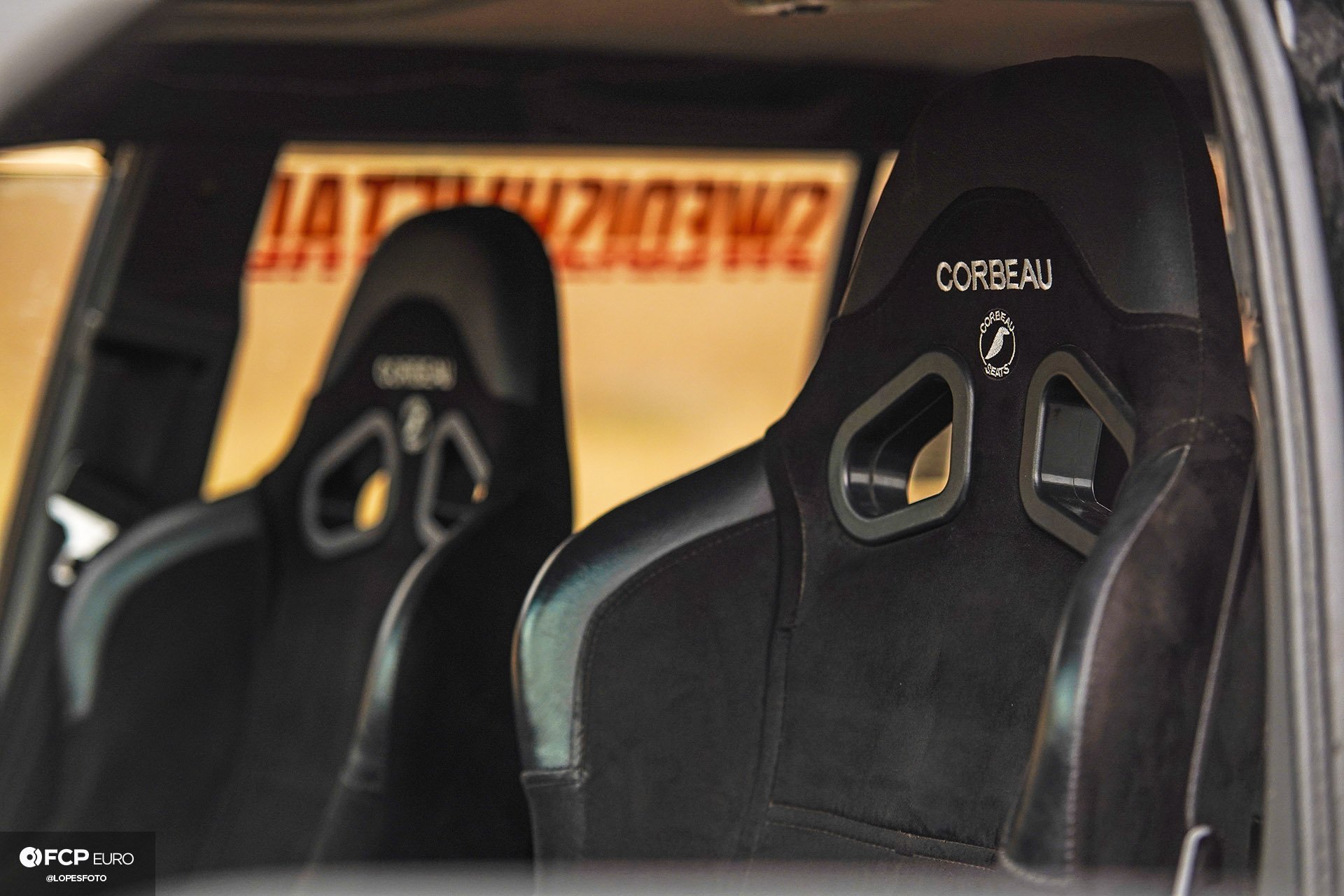 Moving to the inside, Connor and his front passenger sit in a pair of Corbeau A4 suede seats, but use the stock set of seat belts for daily driving duties. 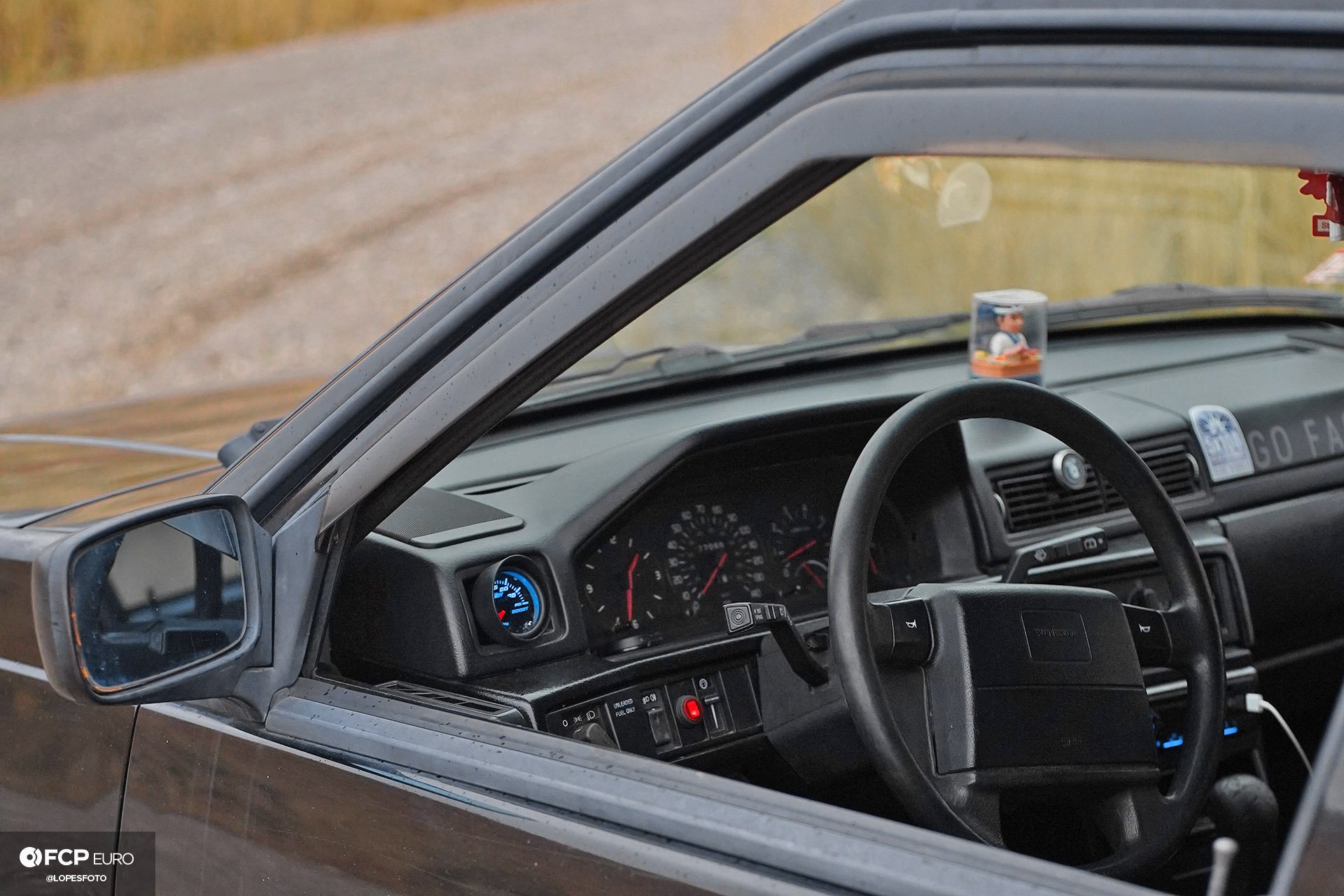 To keep tabs on the boost pressure, Connor installed a Glowshift boost gauge as well as an AEM Electronics Air/Fuel Ratio gauge. 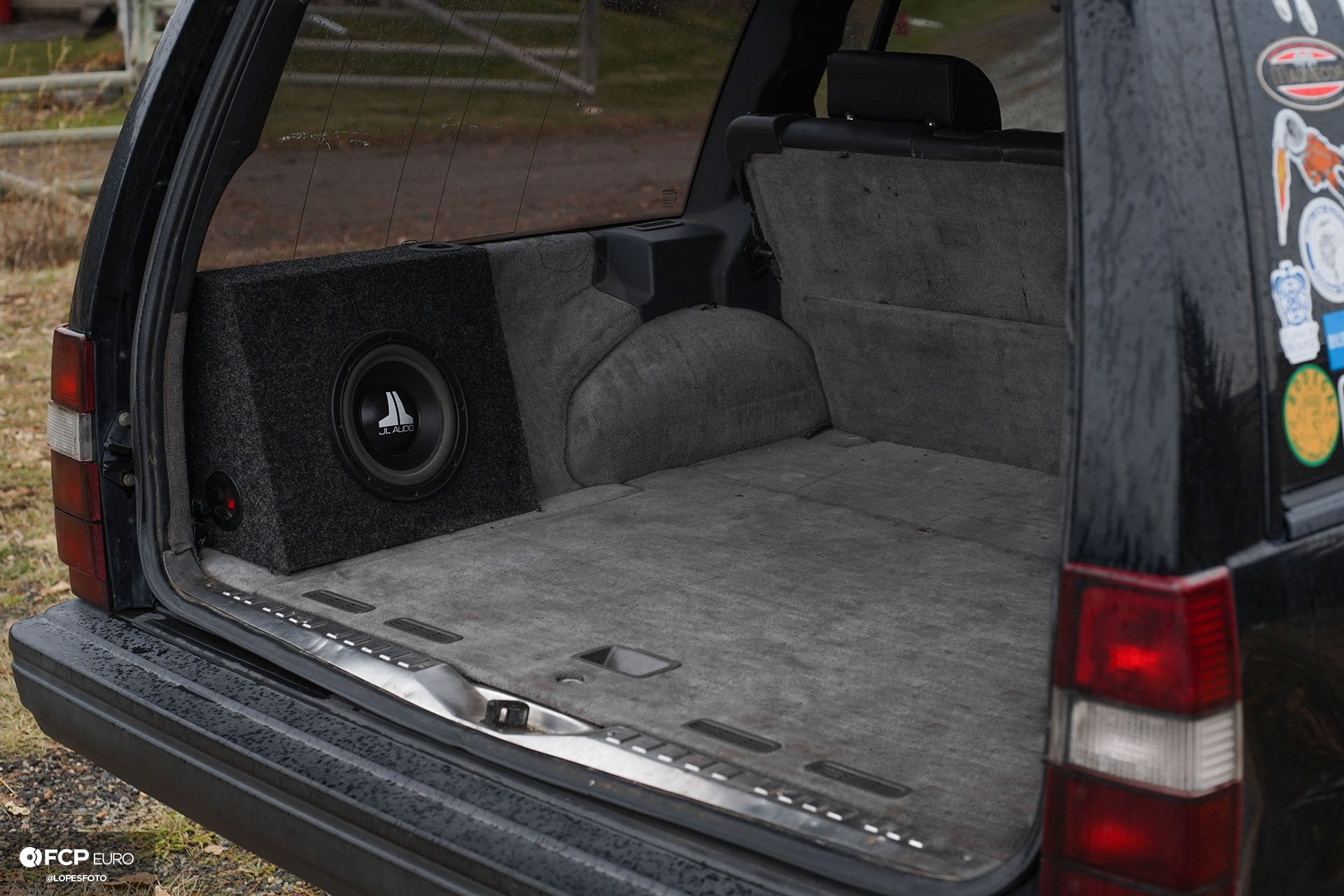 What's an off-roading trip without some music? Connor supplies that with a Pioneer 6.1 sound system. That system is mated to a JL Audio 10-inch subwoofer in an enclosure in the cargo area. The great thing about owning a station wagon like the 940 is you can add something like that enclosure and not lose any room in the cargo area. 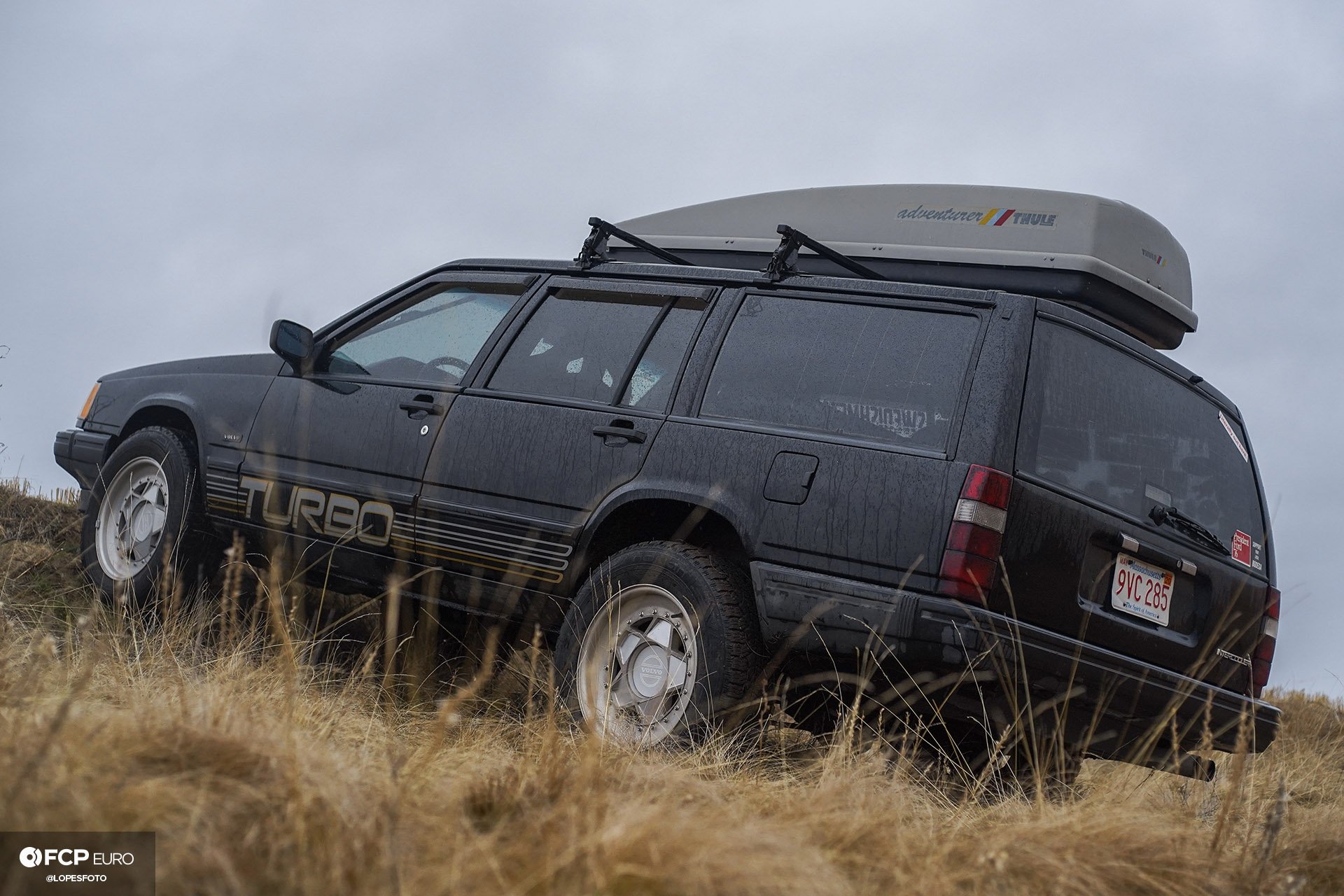 For some additional utility and period-correct looks, Connor added a classic Thule Adventurer roof box to the roof rack. He also added a pair of Swedish Metal “Turbo” side stripes for further period-correct performance claiming appearances. 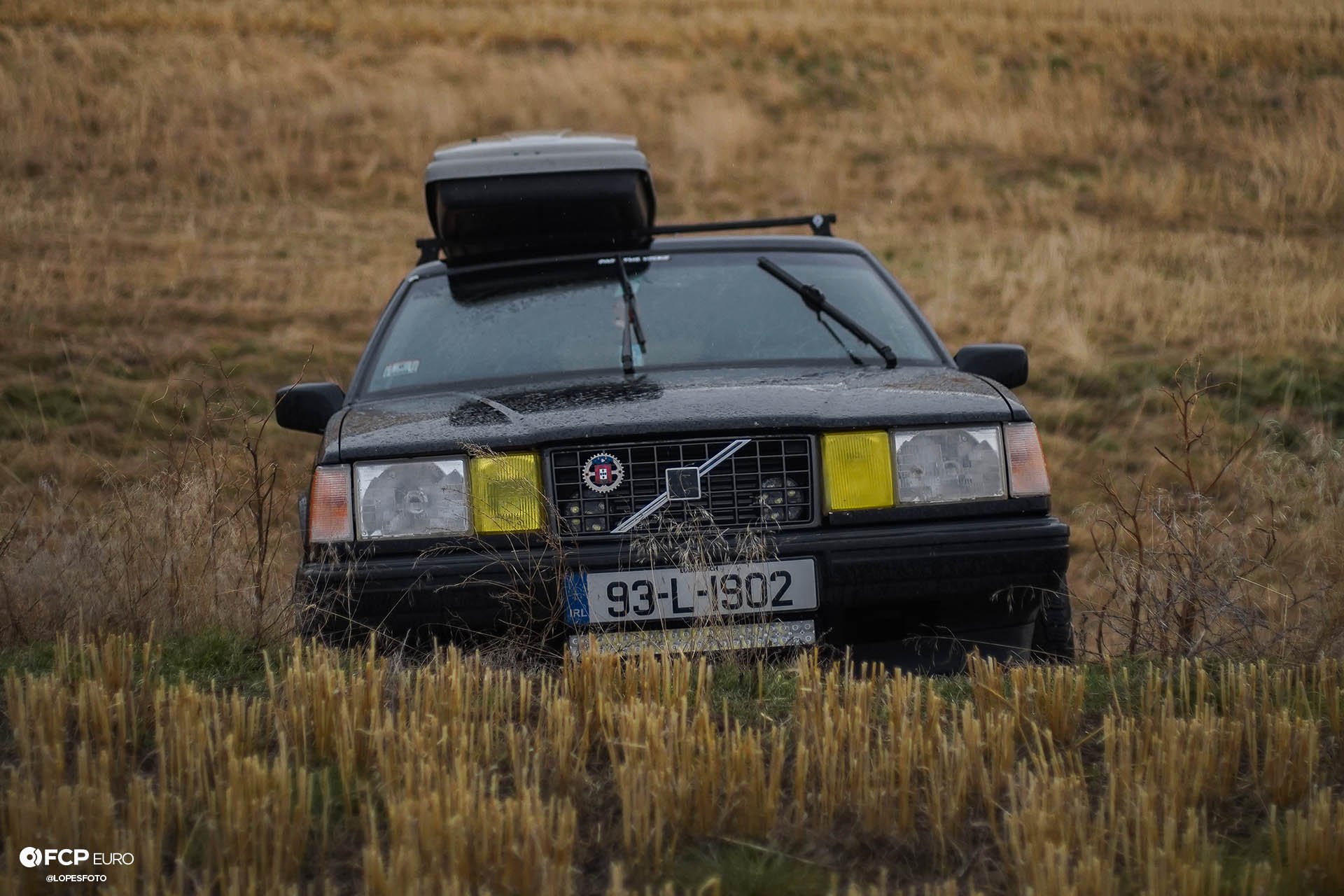 The 940 Turbo Wagon certainly grabs attention wherever Connor goes. It’s not just for the fact that it’s a lifted Volvo but the fact that most people in Montana traffic don’t recognize it at first. “I’ll have random non-Volvo enthusiasts wave me down in traffic and ask how I made a Jeep Cherokee sound like that,” laughed Connor, “That and having fellow enthusiasts tell me they’ve never seen anything like it brings a smile to my face.”

If he were to start another Volvo 940 Wagon project, would Connor build it like this wagon again? “I would absolutely do it all again,” he said. There is one thing he would have changed, though. “The only aspect of the process that I would alter is removing some of the doubt that existed around the project,” Connor explained. Fortunately, he had good friends and fellow enthusiasts to keep pushing him to build the overlanding Volvo wagon. 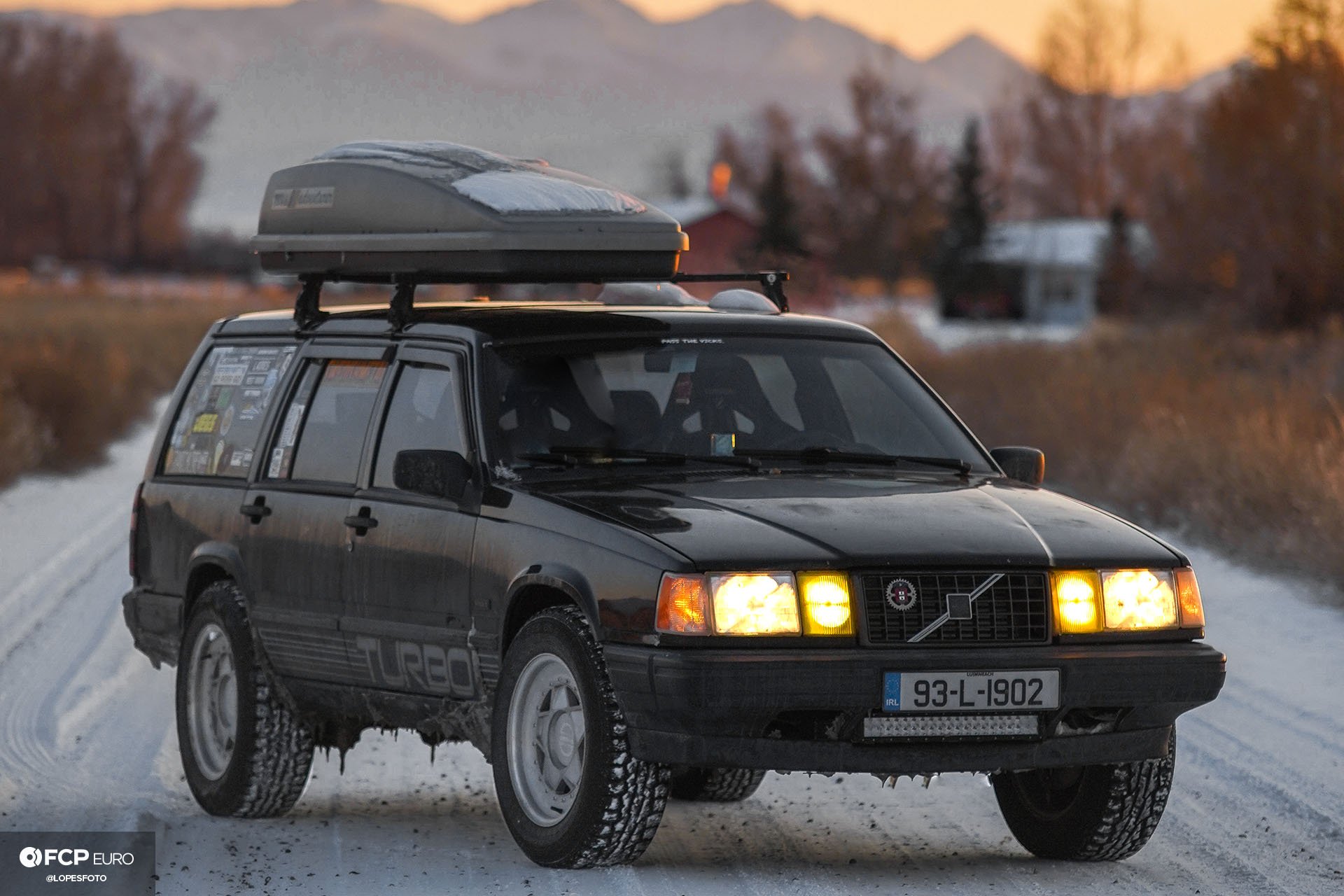 Perhaps building a Volvo will continue to be a unique experience here in the US, but to make one into an overlander is guaranteed to turn heads. While Connor didn’t initially go there with his 940 Turbo Wagon, driving in his new home state proved that a slammed car isn’t perfect everywhere. Giving it a suspension lift and taller tires not only made his life better on those rutted Montana roads, but it also gets the attention of people who aren’t even car enthusiasts.

Making new friends and helping create a new fan base in an area not known for car performance, let alone Volvos—at the end of the day, that’s what matters most. Creating a new automotive family where one didn’t even exist and spreading the love of the automobile. If it takes a lifted Volvo wagon to do it, we don’t think we can argue against the results.

If you enjoyed this Volvo 940 Turbo Wagon, you can find additional Volvo-related content at volvo.fcpeuro.com, as well as more build features like this one, here. If there's anything specific you would like to see, or if you have any questions/comments, leave them in the comments section below.