When it comes to enthusiast-owned automobiles, Volvo is a brand that frequently goes overlooked. The P80 chassis in particular is most often associated with well-dressed university professors and wealthy parents bringing their children to soccer practice. Nick Belmonte decided to take that stereotype and bag it, along with his own Volvo S70. 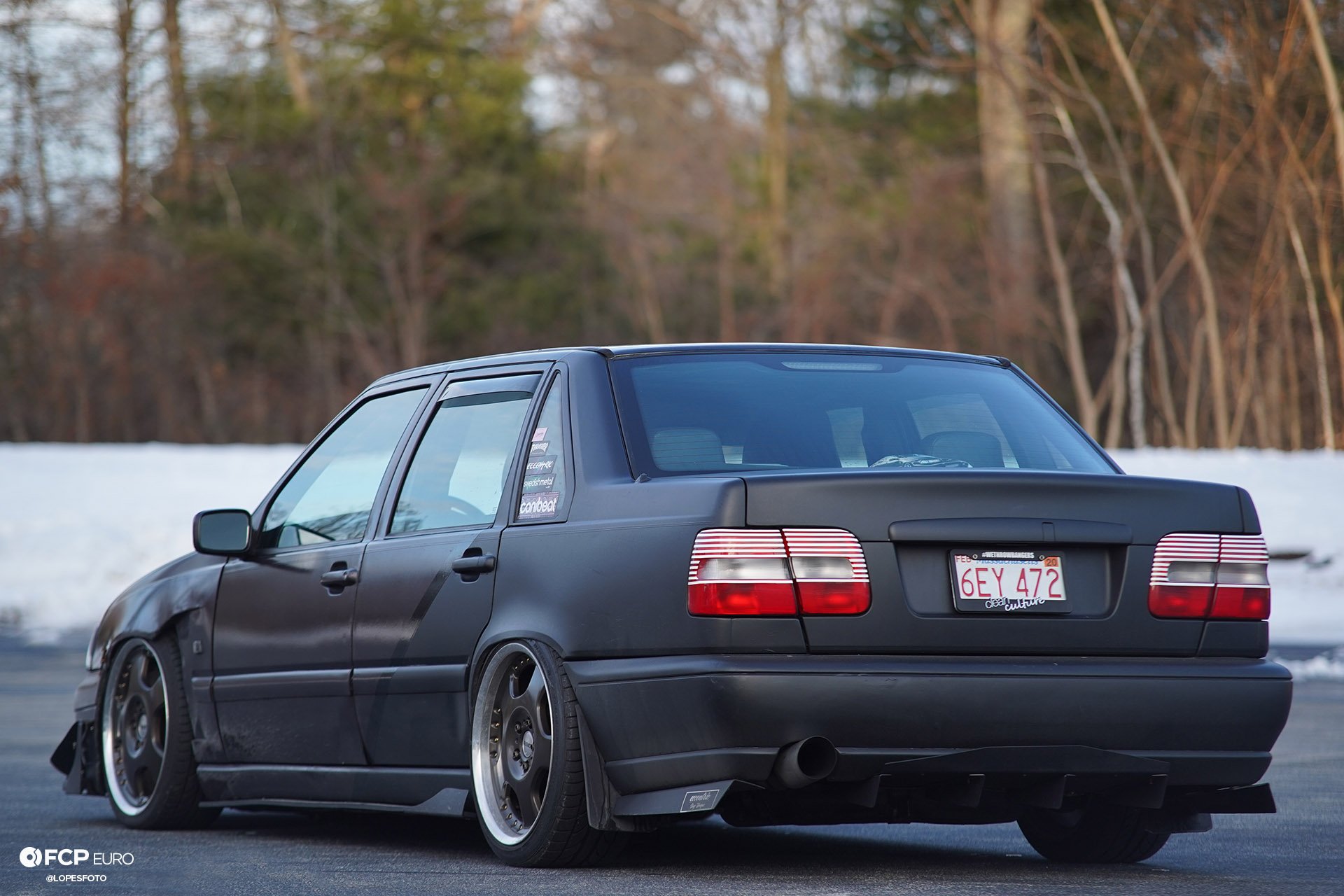 Nick’s first car was an automatic/naturally aspirated Volvo 850 sedan, and it was the car that initially piqued his interest in all things Volvo. He enjoyed the 850 as a daily driver, but soon learned about the potential of the famous Volvo 5-cylinder turbo engines, and began searching for one to call his own. Shortly after graduating high school in 2015, Nick purchased a bone-stock, high mileage 1998 Volvo S70 T5M. 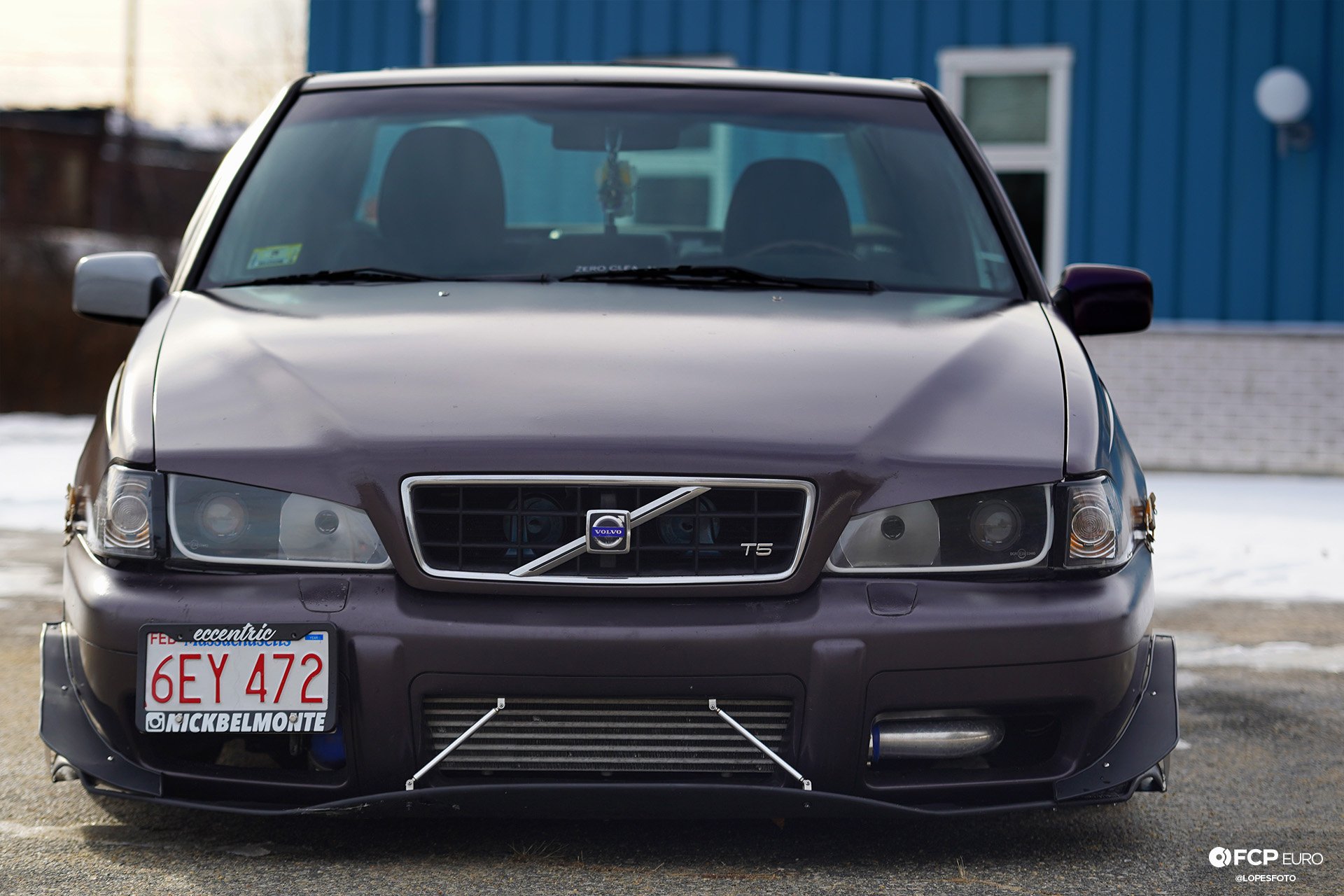 Over the next five years, he gradually built his dream Volvo. His goal for the build was to combine performance and stance, without eliminating the functionality/reliability he needed in a daily driver. He had no initial vision or plan for the build; instead, gradually modifying the car based on whatever new ideas he could come up with. 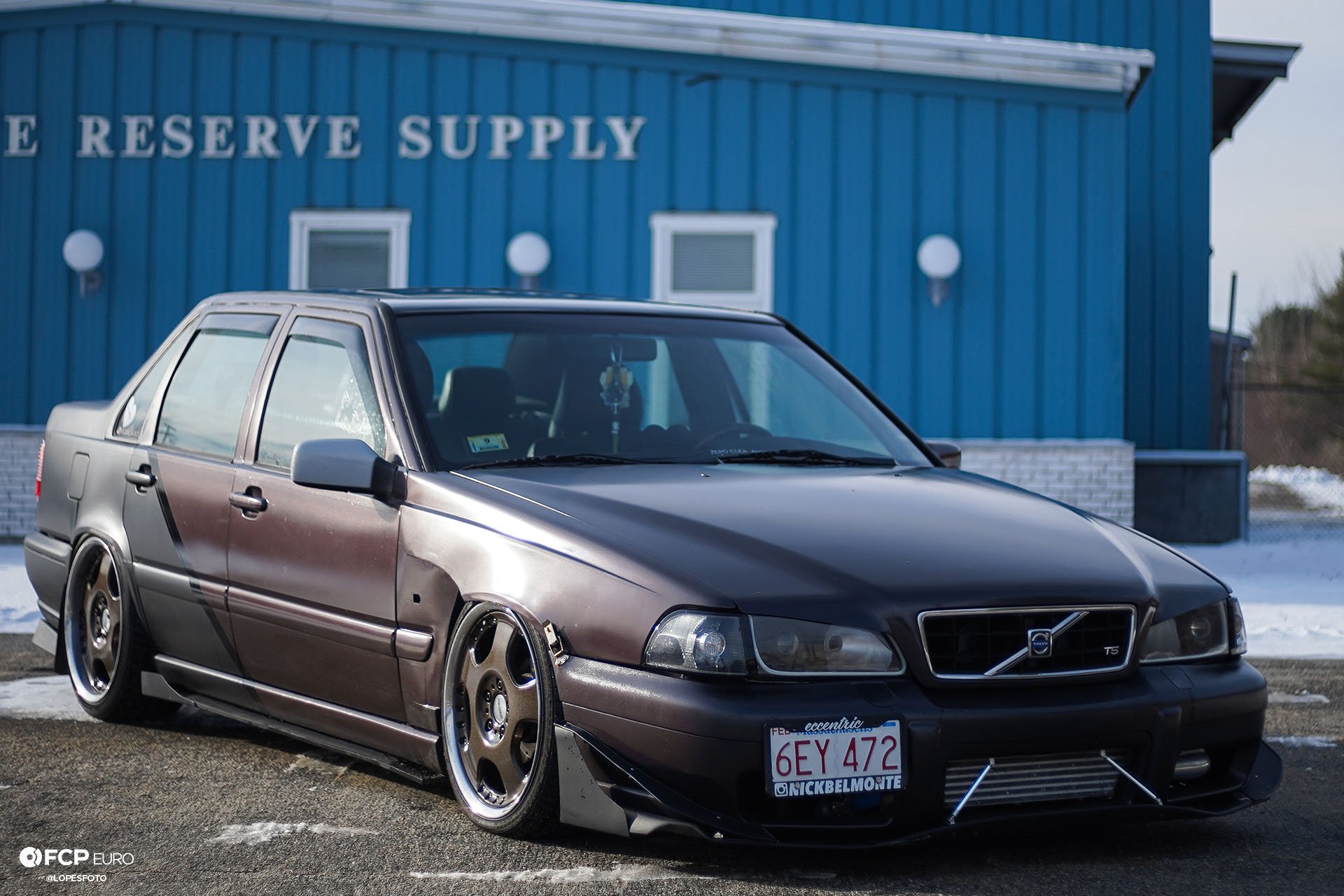 The exterior of this Volvo sedan is hard to miss - it grabs the attention of most every passerby who happens to spot the car. A Scion FRS lip with custom canards adorns the front of the car, along with a Boser-style hood that gives the custom-built LED headlights a significantly more aggressive look. 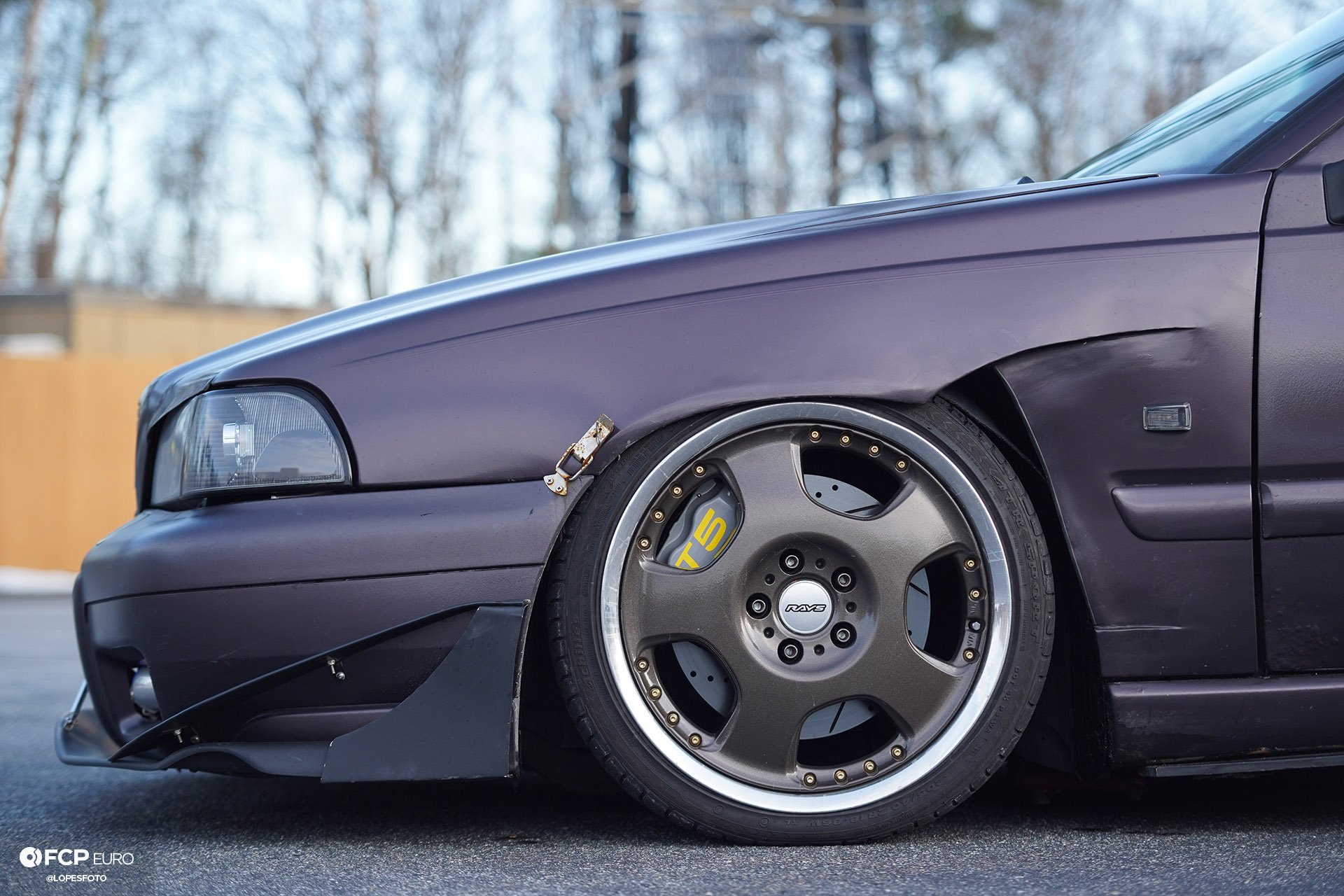 Custom widebody-style fenders allowed Nick to squeeze a staggered set of 2-piece Rays V-Pieza wheels within the wheel wells. Behind those rare JDM wheels reside a set of S60R 4-piston calipers with 330mm rotors on all four corners. A set of custom side skirts and rear diffusor with side winglets ground the car, giving it the stance it always deserved. To finish it off, Nick dipped the entire car himself - with half of it done in Volcanic Black and the other half in Matte Black. 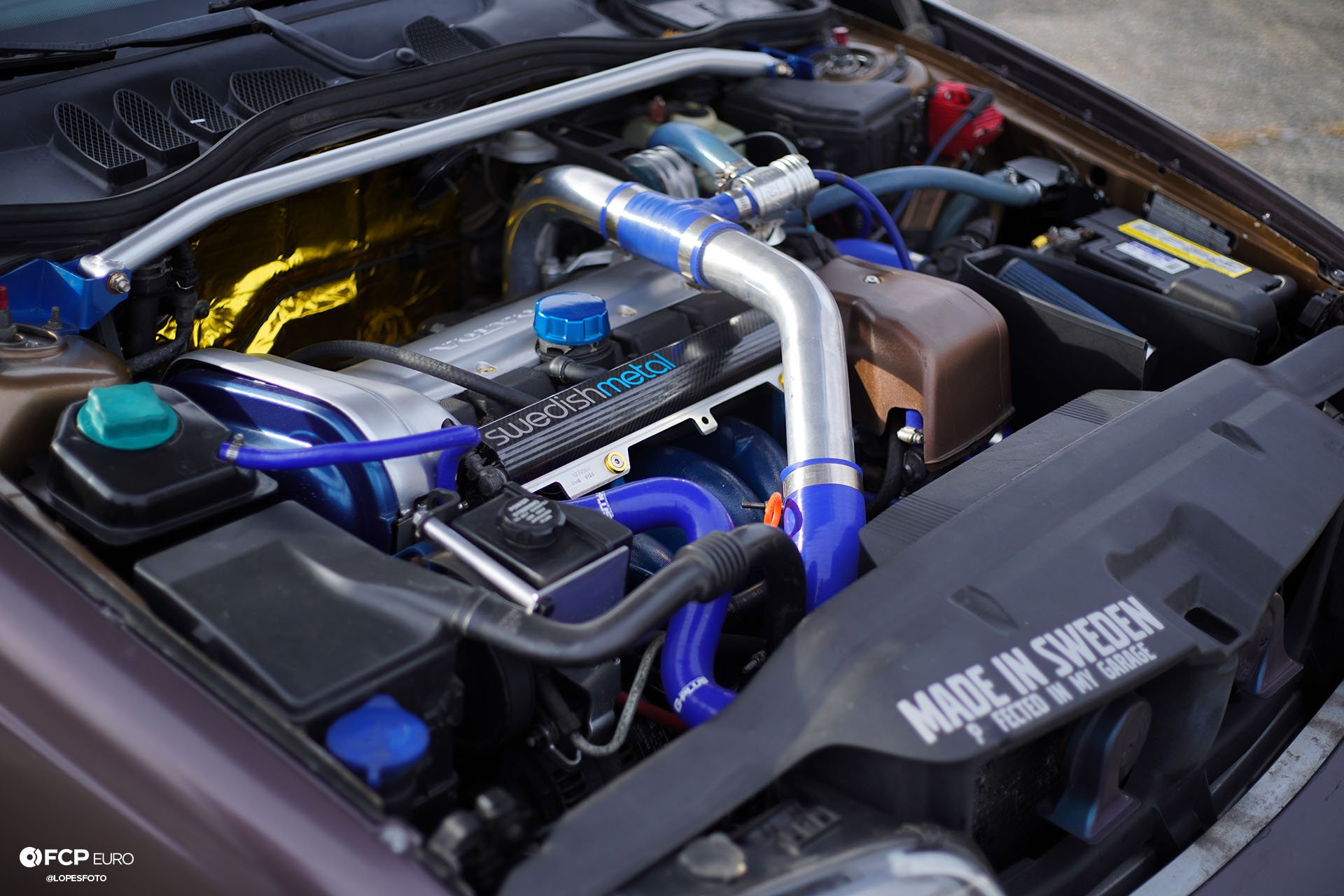 When it comes to the engine of this vehicle, Nick left no stone unturned. He swapped in a lower-mileage B5234T3 RN motor from a 2001 C70, and got to work. He installed a 3-inch catless downpipe and a 2.5 inch straight pipe to help achieve the exhaust note he wanted. 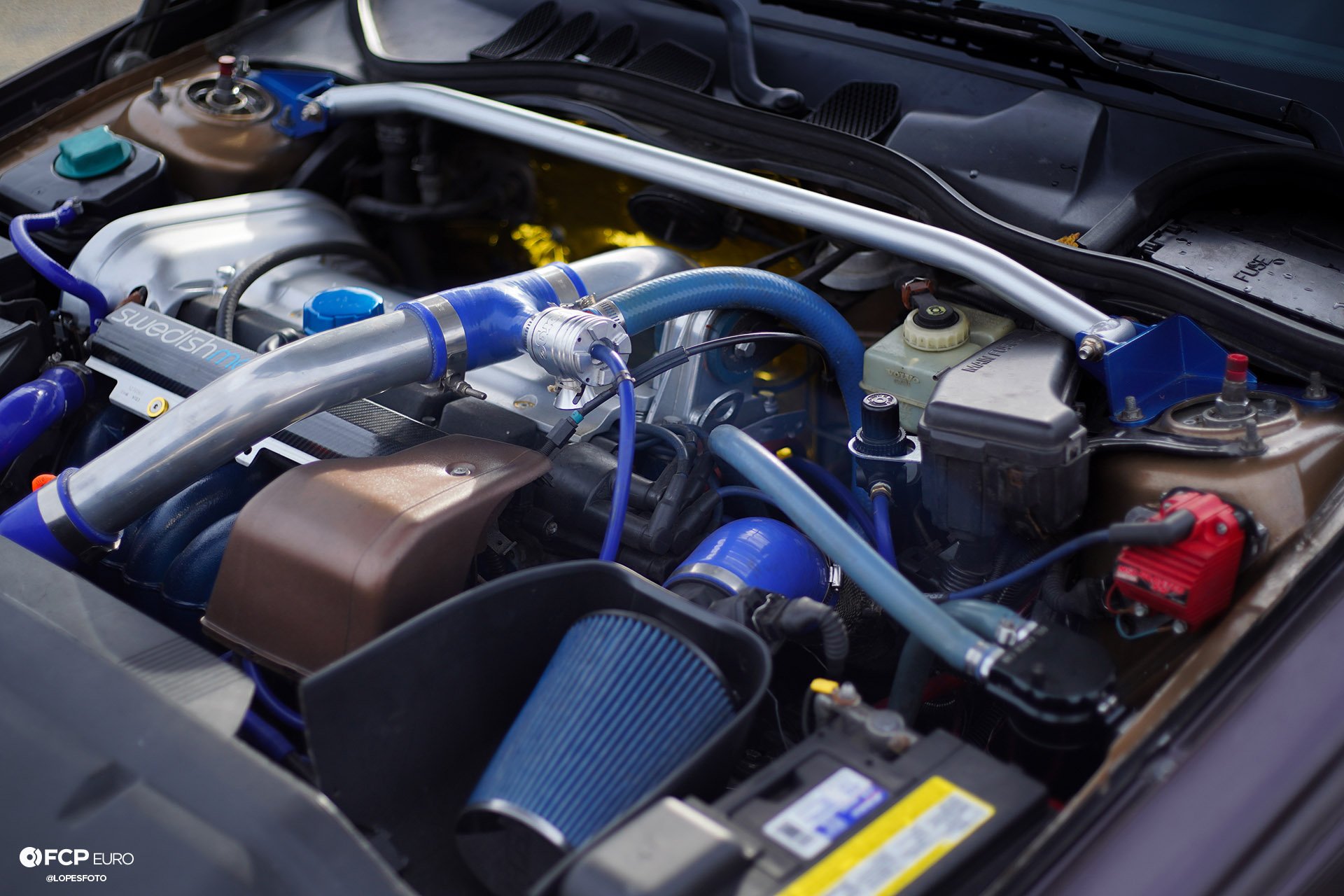 In order to allow the car to breathe more efficiently, Nick installed a Volvo R style exhaust manifold, NA model intake manifold, custom front mount intercooler, AEM fresh air intake, Volvo 960 throttle plate, Forge Motorsport splitter valve, and a Turbonetics boost controller. IPD supplied the build with a Stage 1 ECU tune, which helped tie all of the engine modifications together and allowed the engine to run a modest 17PSI in every gear. During the engine swap, a Sachs Clutch kit was sourced from FCP Euro, and the original dual-mass flywheel was resurfaced at a local machine shop. Additionally, a poly torque rod mount, new motor mounts, and a Snabb short shifter were installed to help handle the additional power.

The car was initially lowered on cheap coilovers, but Nick eventually decided to take the suspension a step further - installing a one-off, entirely custom air bag suspension system. For the front, he installed a set of CX Racing coilover struts with custom-fabricated brackets to mount AirLift universal air bags. 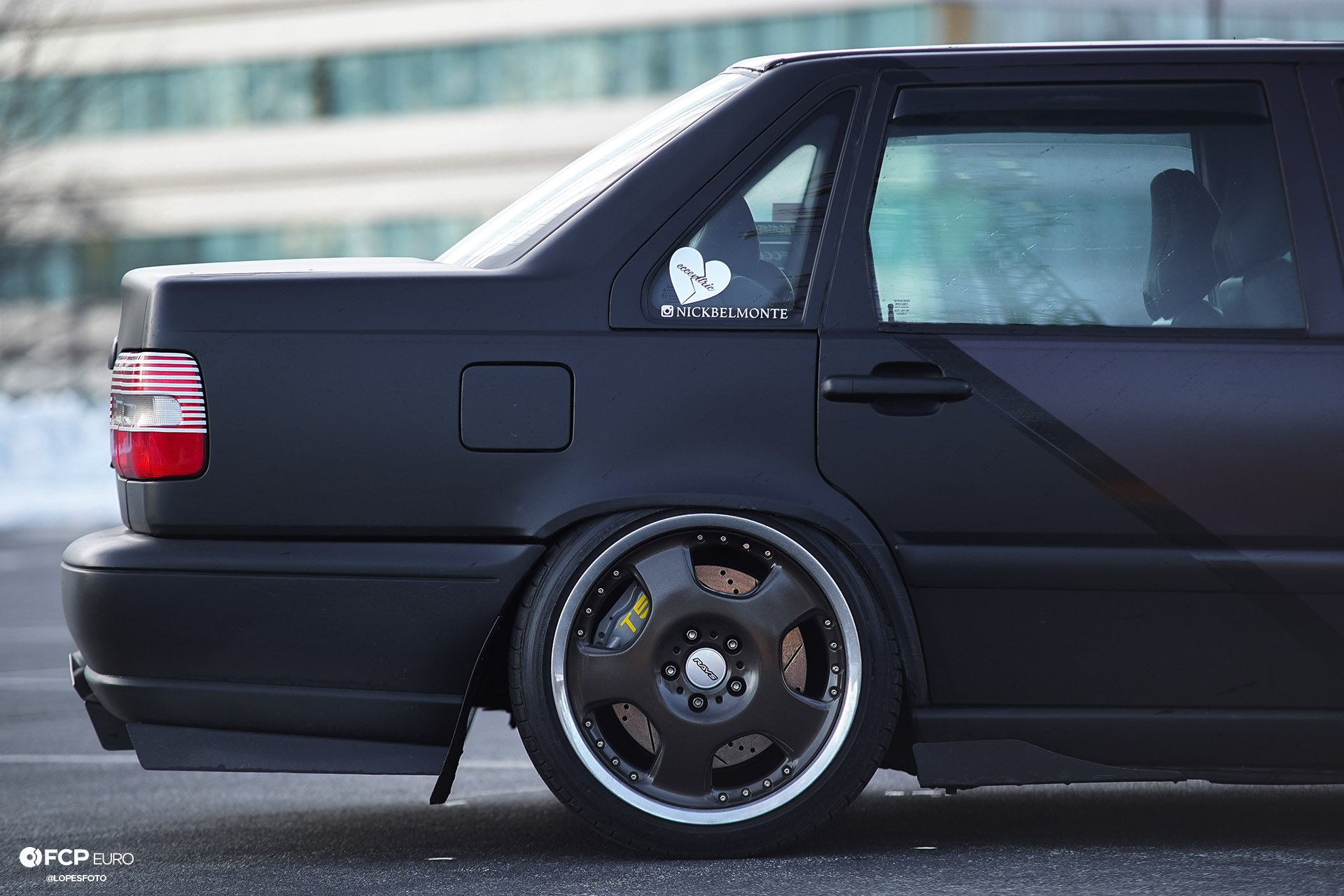 For the rear, he ended up installing Koni Yellow shocks and custom-fabricating brackets for mounting AirLift bags. An OBX front strut brace, a C70 convertible rear chassis brace, and Mookeeh camber plates help to stiffen up the chassis, while allowing for additional alignment adjustment. To bring this 20 year old Volvo back to its former glory, Nick sourced a set of control arms, CV axles, sway bar end links, poly subframe bushing inserts, delta links, and rear shock mounts from FCP Euro to refresh the rest of the suspension. 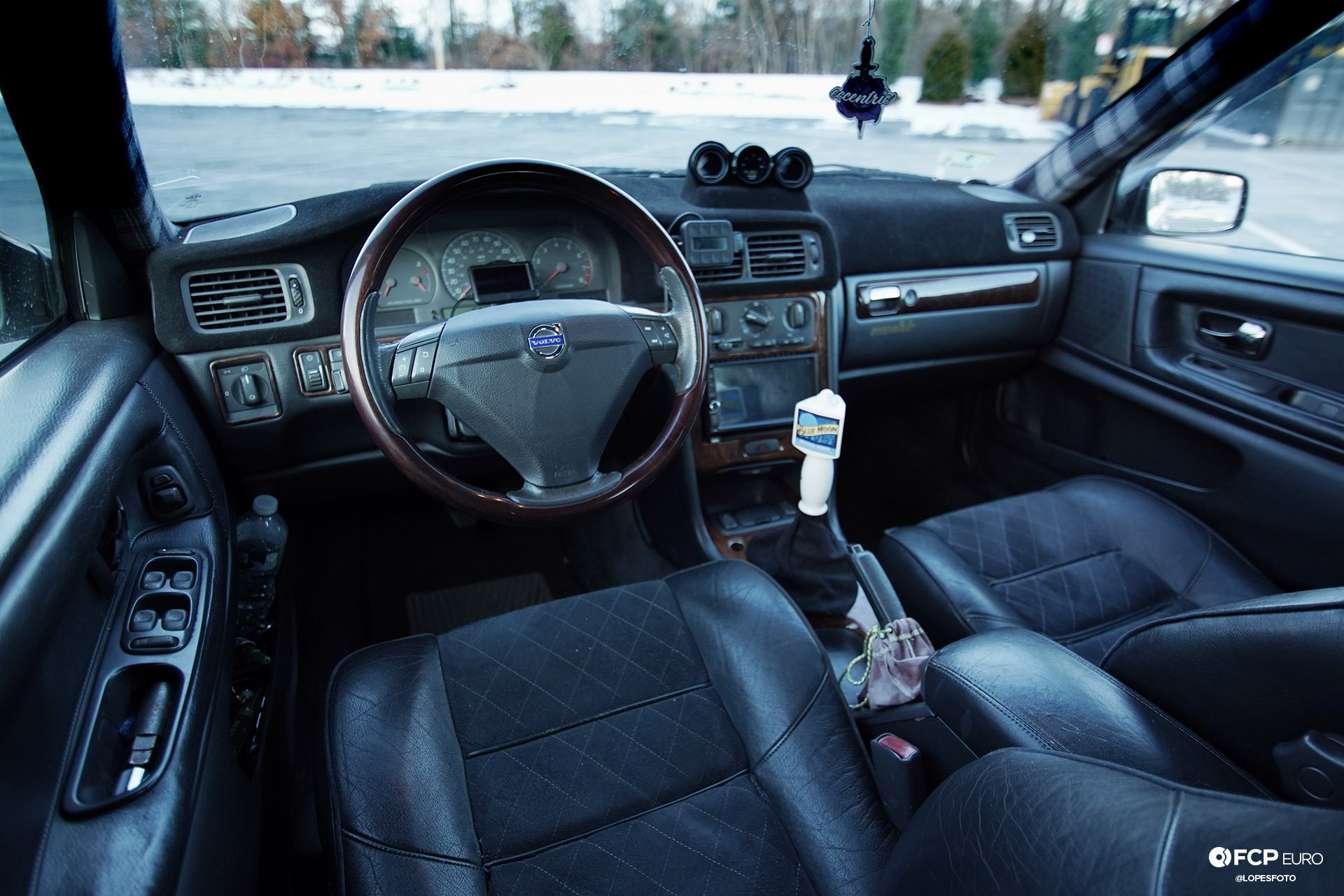 When looking to spice up the interior of this ex-family sedan, Nick decided to install a set of Alcantara front seats out of a 2000 V70R. A wood grain steering wheel from an XC90 was installed next, giving the interior a more luxurious and high-quality feel. 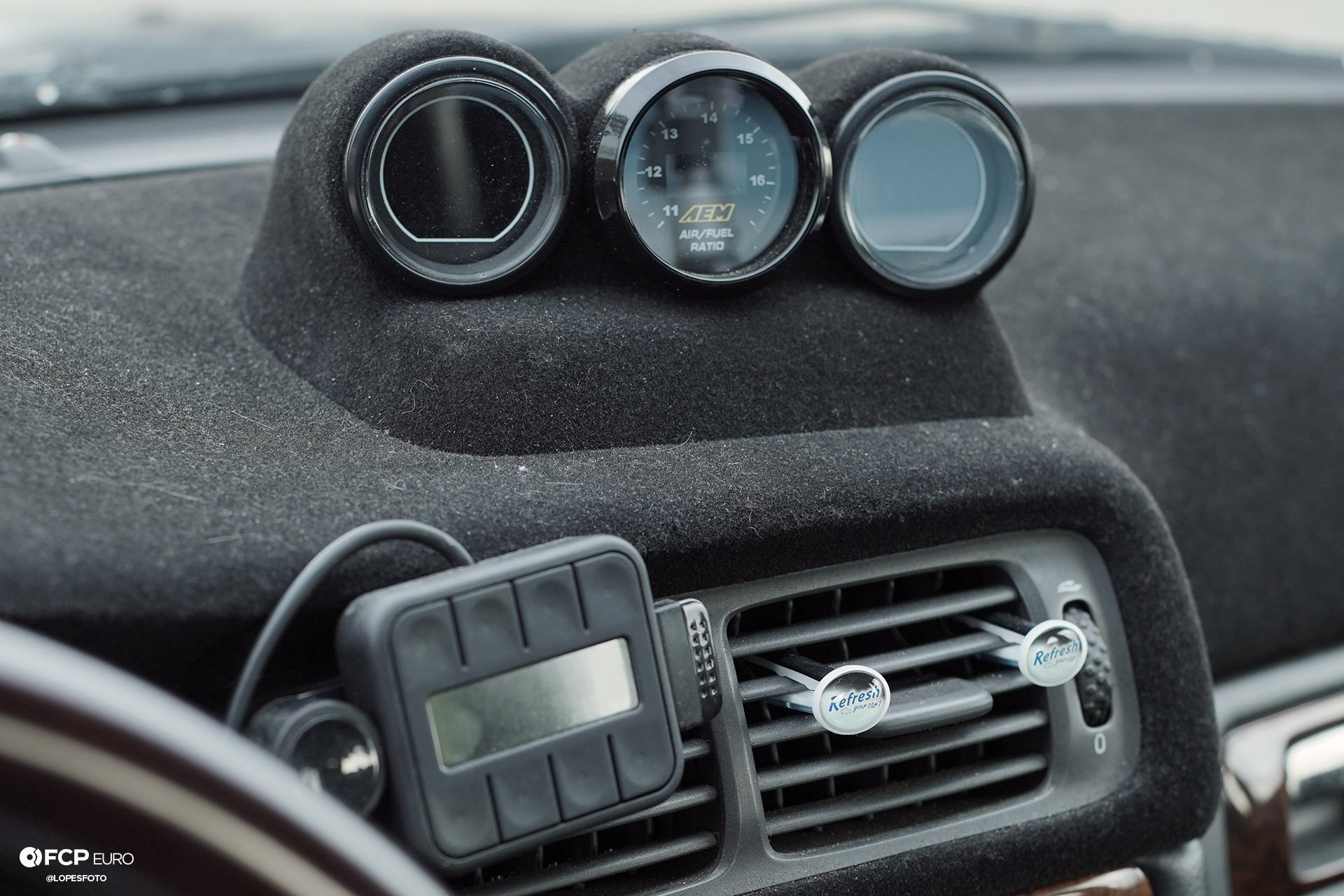 Nick then went to work building a custom, one-off molded, gauge pod to cover the no-longer-functioning middle dashboard speaker. He filled the empty gauge pod with boost, oil pressure, and the air/fuel ratio gauges in order to monitor the car’s vital information. 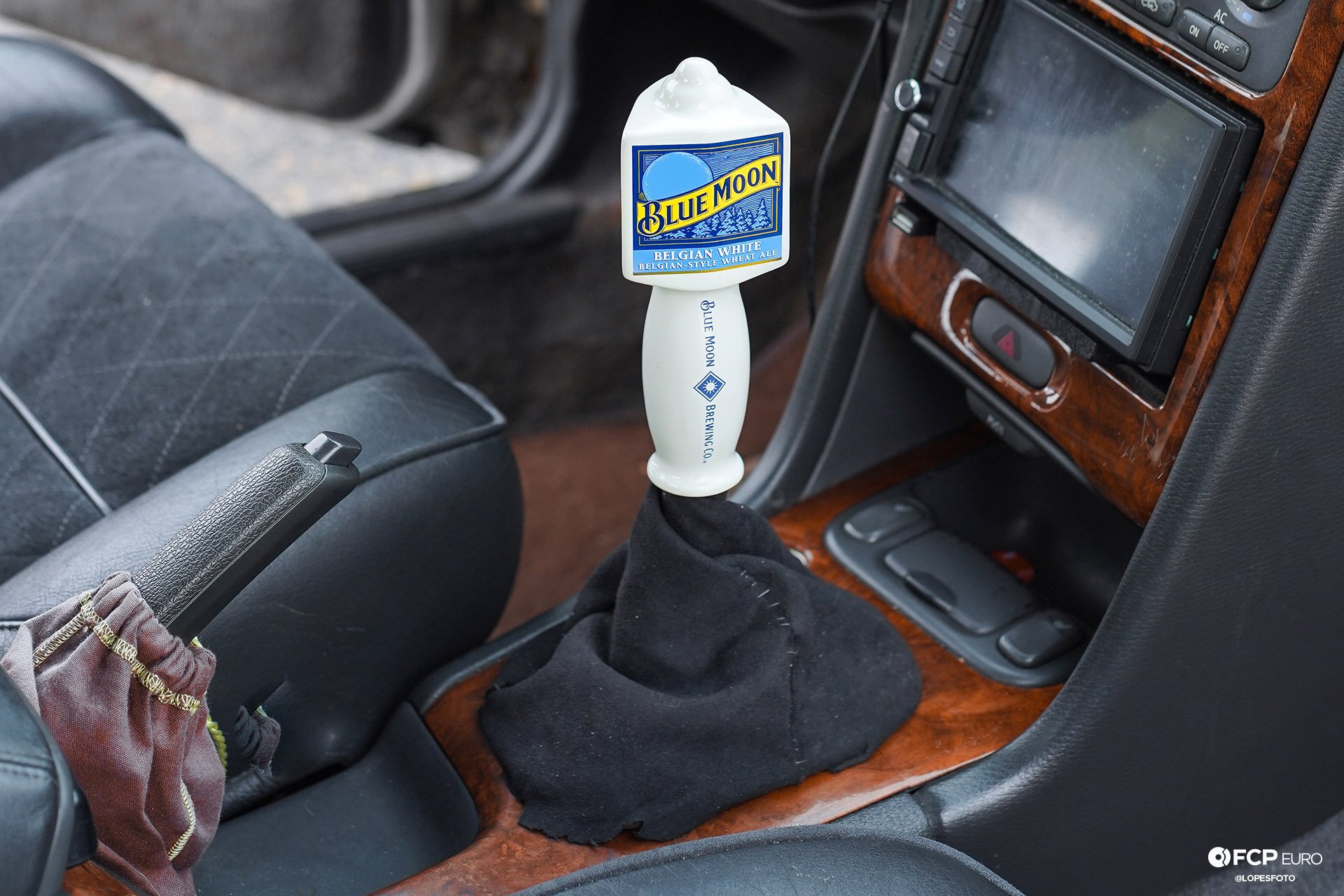 The interior was finished off with an AirLift control module, a crown royal shift boot, and a custom Blue Moon tap handle shifter knob. 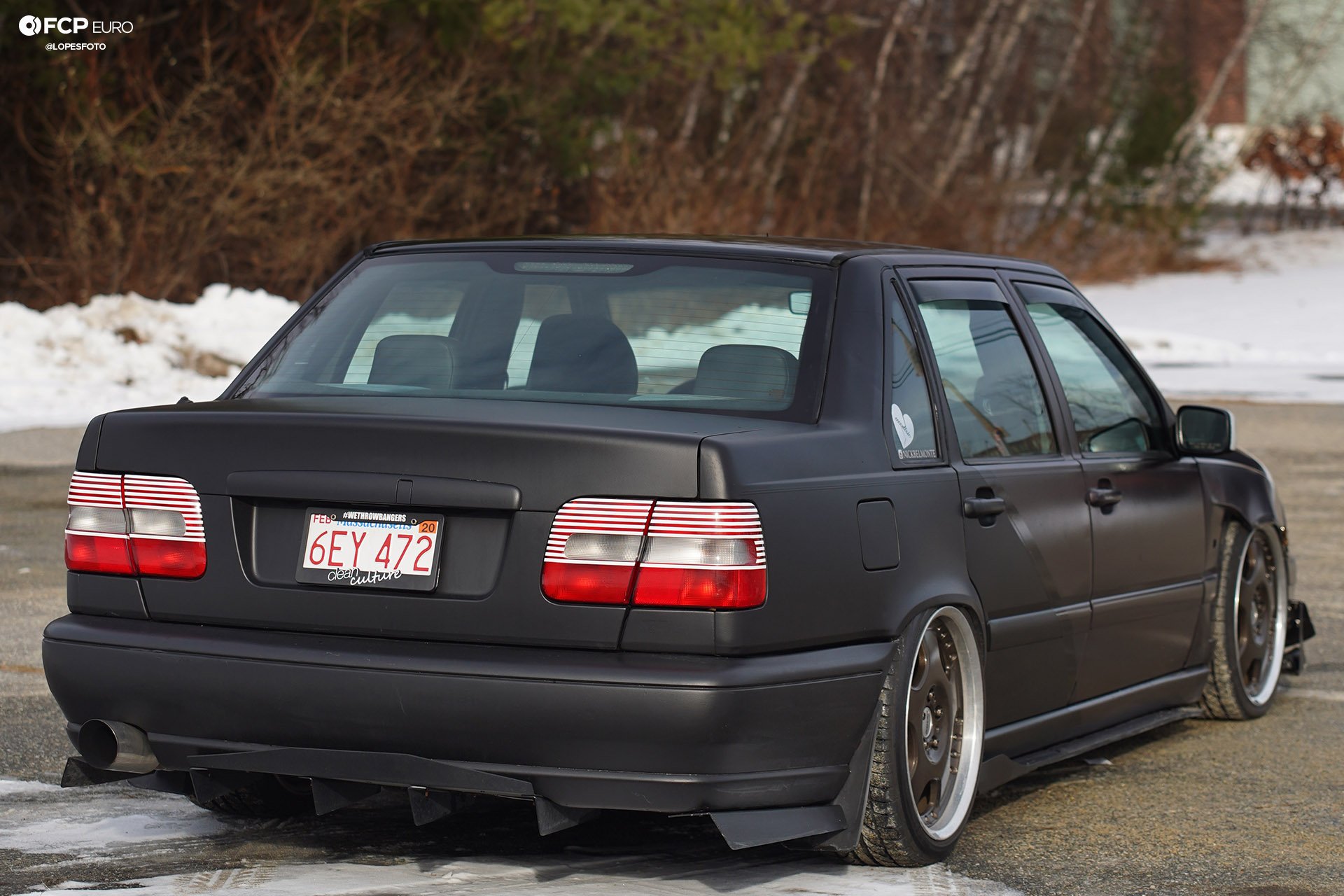 Nick reportedly never ran into any major setbacks during the 5 years he spent building this car. The most difficult modifications were getting the P2 S60R big brake kit to fit properly, and installing the air suspension system. Without the help from fellow Volvo enthusiasts from all around the country, Nick says he would have never been able to finish these two projects on his own. He admits that he never expected it to go as far as it has, but he certainly seemed to be enjoying the car in its current state. 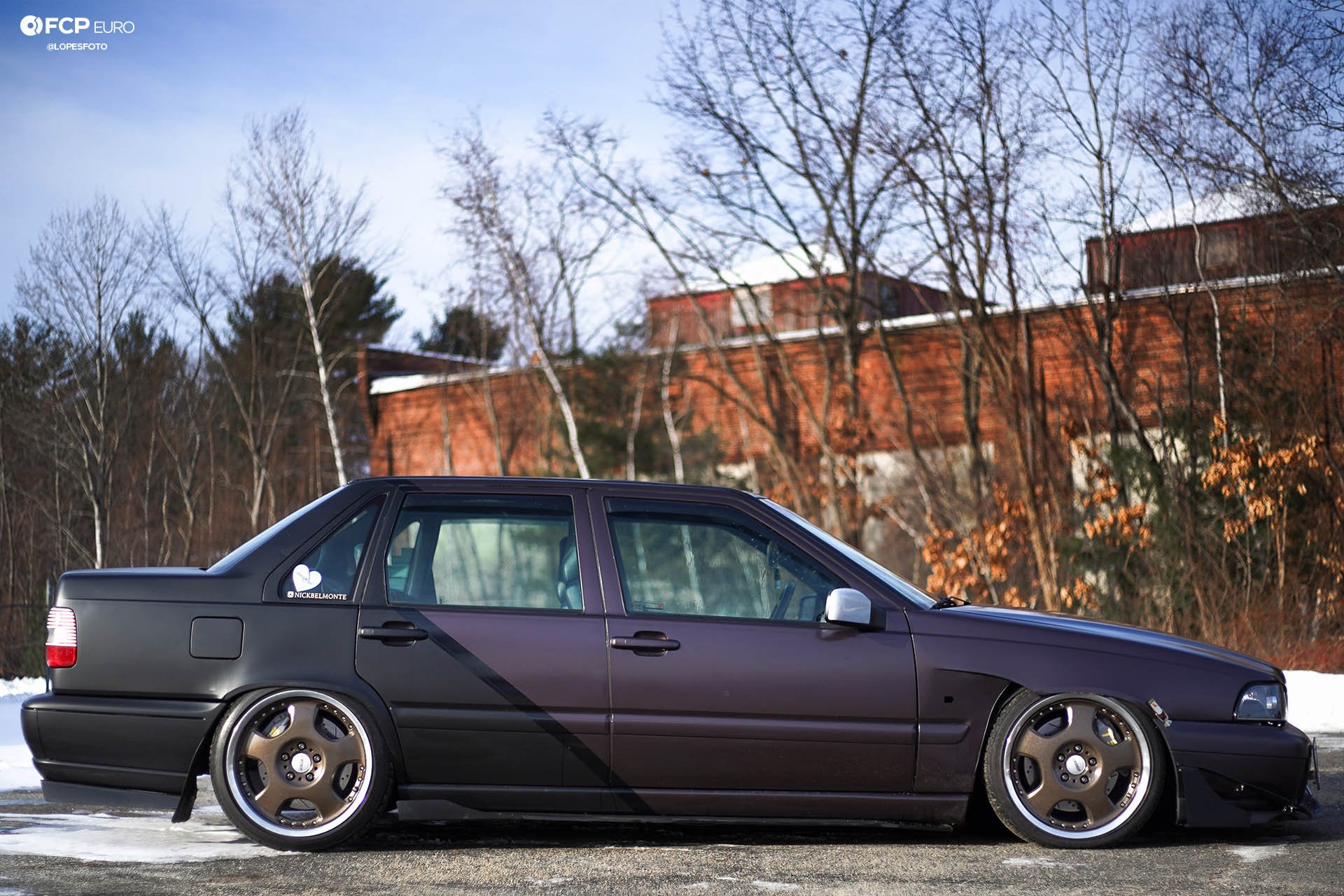 In the near future, Nick plans to mount a set of 18x8 Work LS105 wheels on the car, finish up the tune he’s been working on with Sovvagn Motorwerke, and continue cleaning up the engine bay (relocating the battery to the trunk, rerouting vacuum lines, etc). Homebrewed builds like these are what FCP Euro customers love to see: home-built, über-unique, long-term projects that allow the owner’s passion and devotion to shine through.

Story and Photos by Connor Lopes

If you enjoyed this Volvo S70 T5M, you can find additional Volvo-related content at volvo.fcpeuro.com, as well as more build features like this one, here. If there's anything specific you would like to see, or if you have any questions/comments, leave them in the comments section below.