There is a seductive attraction of a widebody and one of the finest is Liberty Walk. This rare kit certainly gave this Mercedes-Benz AMG C63 a more powerful appearance.

Nielson Ballon wasn’t looking for a C63 when he was car shopping in 2017. “I wasn’t in the market for an AMG,” he told us, “but I was searching for a vehicle that would accommodate my family.” He and his wife looked at two-doors, four-doors, and even SUVs but nothing caught their eyes. Then in March, they went to a local Mercedes-Benz dealer and was shown a 2012 AMG C63. “I just fell in love with the body style,” Nielson explained, “there are straight lines that are no longer on the newer AMGs, its black color, and just everything else about it was pure sex.” He had walked away, wanting to sleep on the decision but his wife egged him on to purchase it. It's hard to argue with your significant other, right? 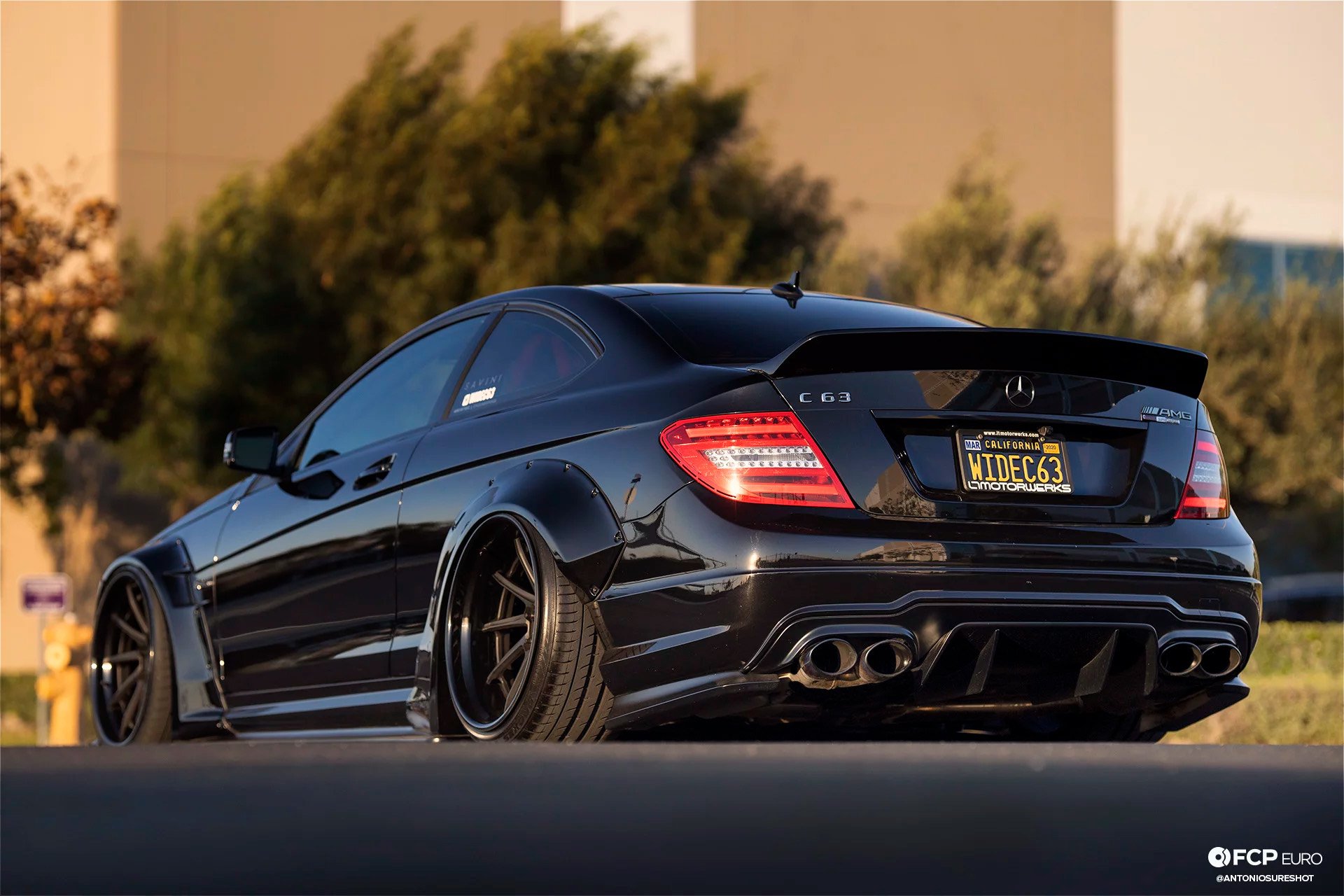 Nielson was quite happy with the stock AMG for about a month, but that’s when the mod bug bit him. It was just basics like coilovers, wheels, and deleting most of the chrome, but then he joined AMG SoCal Lounge – a Facebook Group just for AMG owners in Southern California. He was hooked after attending an event they put on as he recalled his own past in the car industry.

It wasn’t long after that meet when he decided to meet up with Long Tran of LTMW. It was Tran who then introduced him to the world of Liberty Walk. Nielson was convinced and made it into a SEMA Show car with LTMW’s expertise. “It was only six weeks until the 2017 SEMA Show,” Nielson said, “but it was Liberty Walk or bust.” 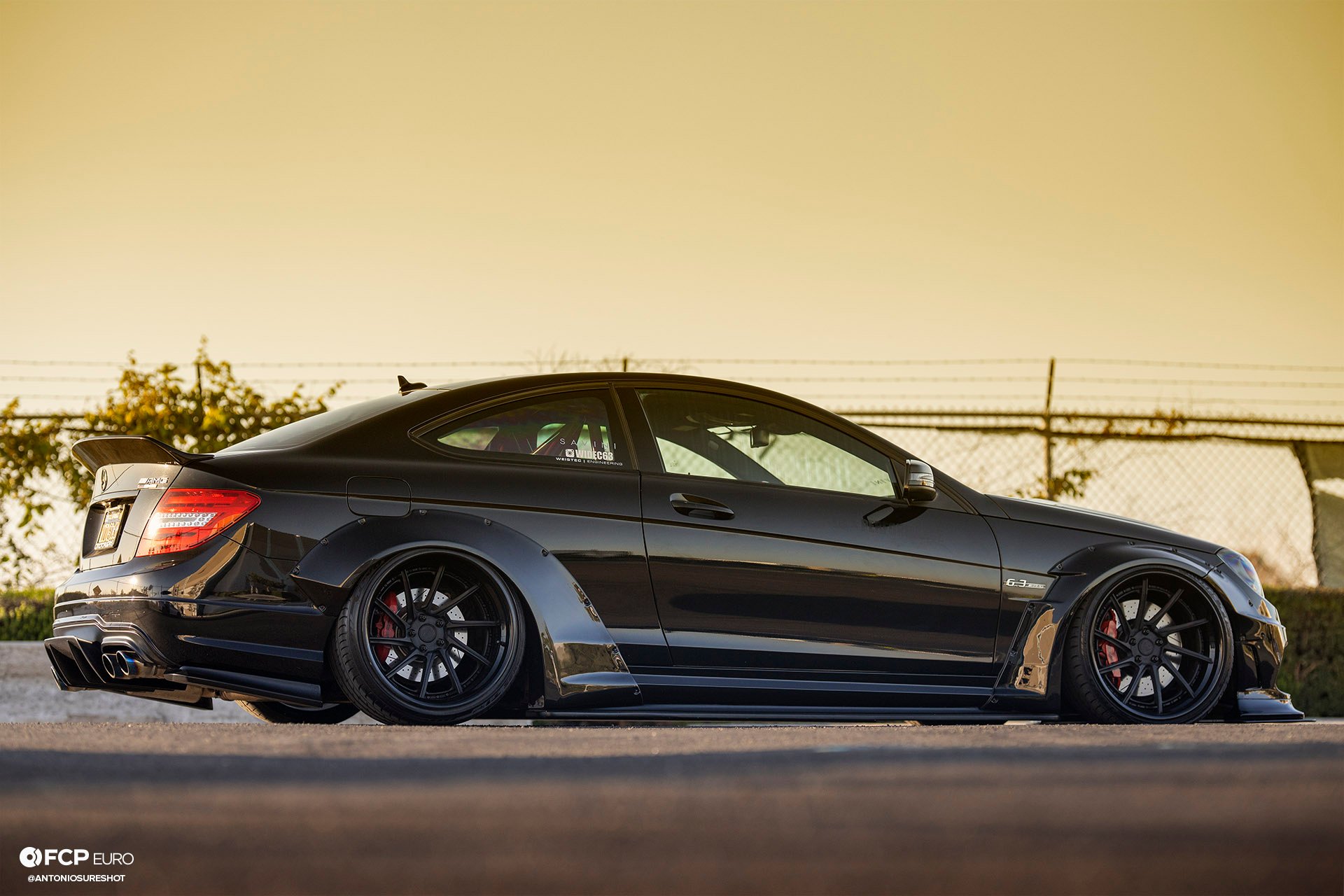 When it comes to a Liberty Walk kit, there is nothing sedate about it. However, it does bring about images of insane race cars that we had seen in the DTM in the past. Flares that allow for much wider wheels with deeper lips and aggressive offsets than the standard AMG body would ever allow. The body lines of the kit match well with the lines already established from the factory but make no qualms about it being wider.

The custom set of Savini Black di Forza BM15-L in Satin Black just ooze out some additional class with a 19x9.5 front and 19x12 rear staggered wheel setup. They are also wrapped up in a set of Toyo Tires Proxes tires. The front tires are stretched a bit but the rear stretch is more visually pronounced.

Because of their high-performance focus, there isn’t much you can do to improve the looks of any AMG interior. It’s driver-focused with touches of carbon trim everywhere. We’d argue that AMG creates some of the best looking interiors in the market. Therefore, when something is added, it catches your attention. That’s why you’ll notice the Air Lift Performance suspension controller mounted to the dashboard. We’ll speak more on that in a moment. 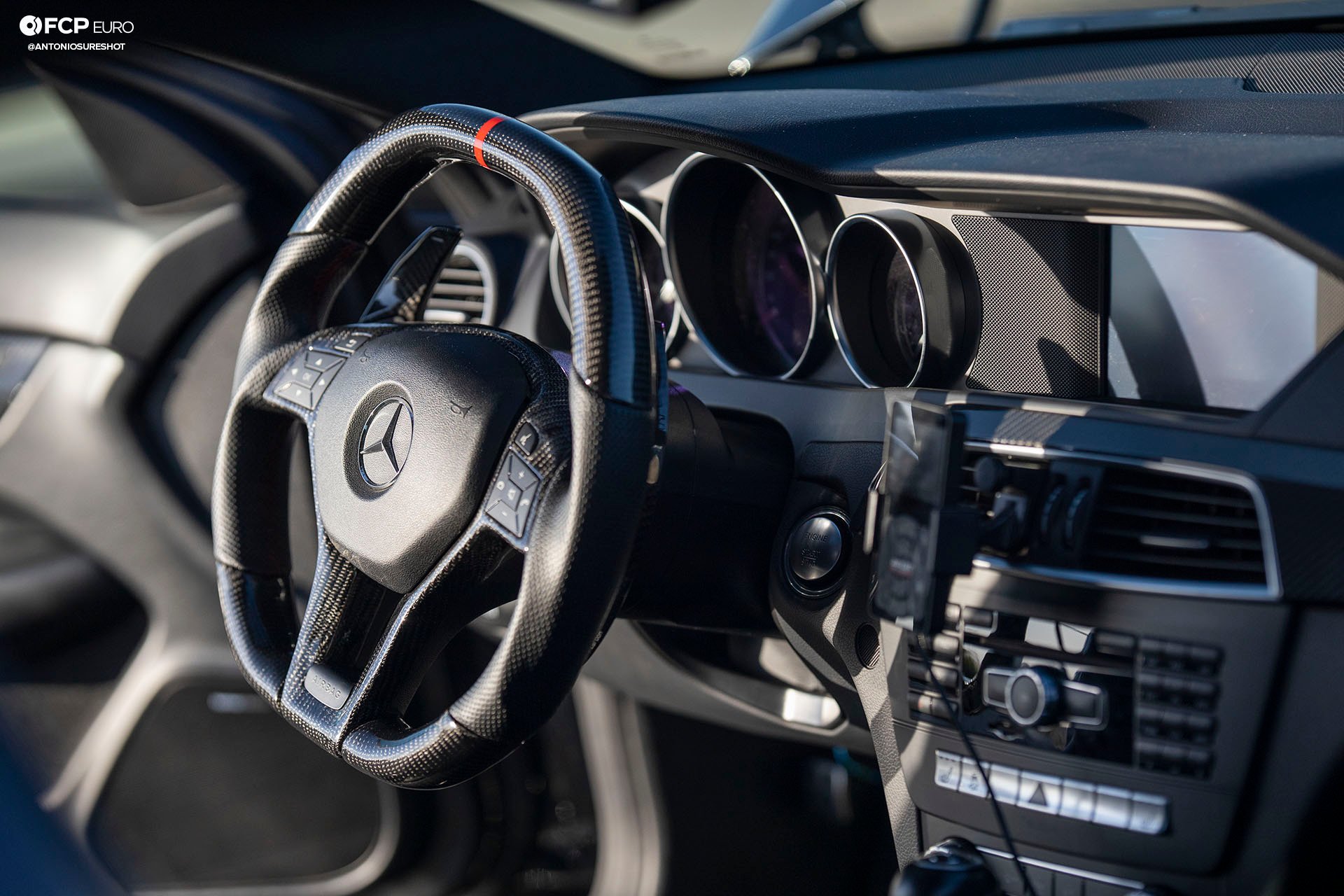 Every time you hold on to that steering wheel, you are reminded that AMG makes racing vehicles. This wheel isn’t completely stock, though, as RevoTech Motorsports worked their magic to add even more racing designs into it. Its flat top, bottom half, and spokes are covered in carbon fiber, accentuating the race car design from AMG. They even included the red stripe at the top, a feature that allows the driver to easily count steering wheel turns and when it is pointing straight up. 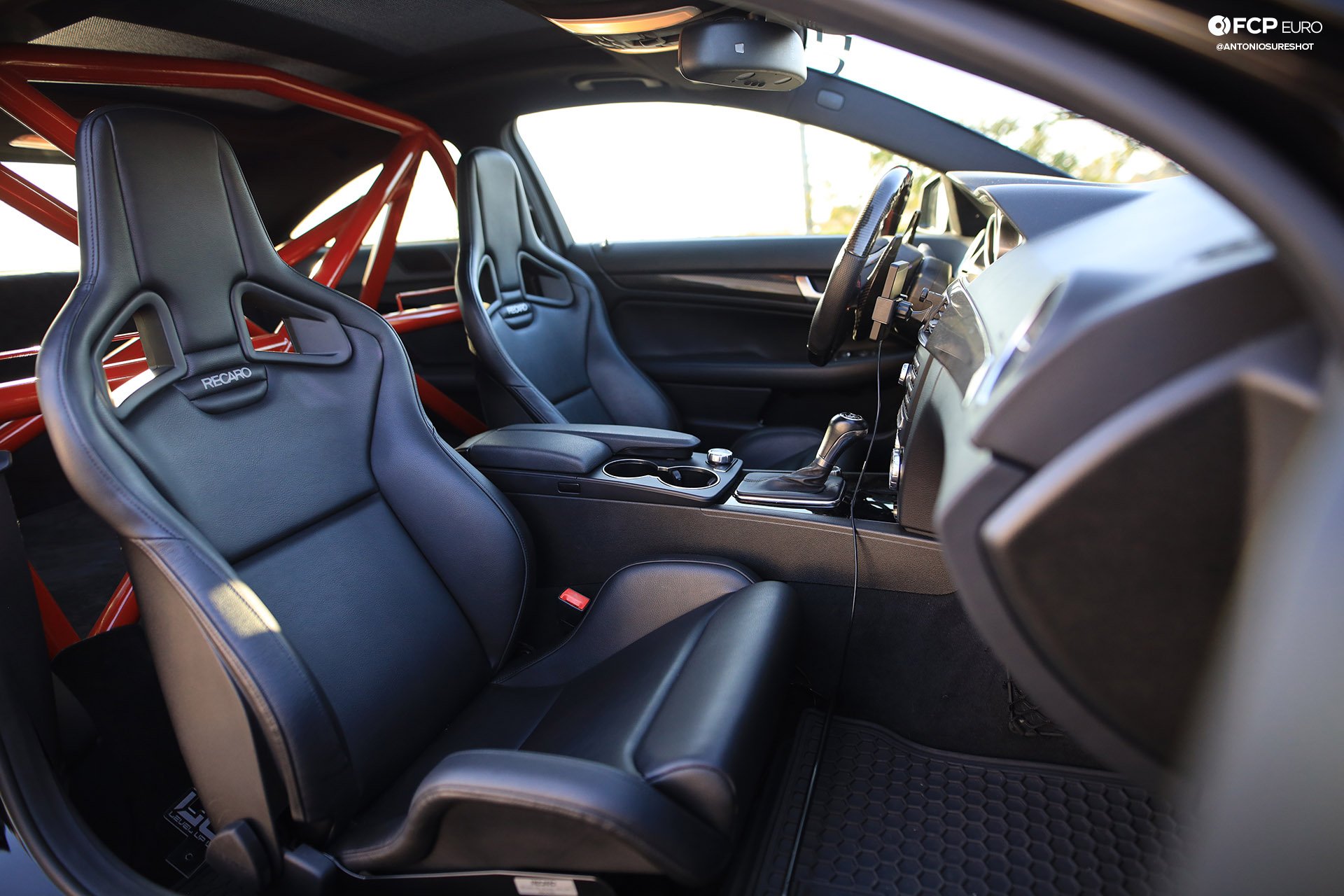 Those Recaro Sportster CS seats are made for high-performance and spirited driving but still allow their occupants adjustability for comfort. The rear seats, however, are replaced with a custom Studio RSR delete panel along with a roll cage coated in red. 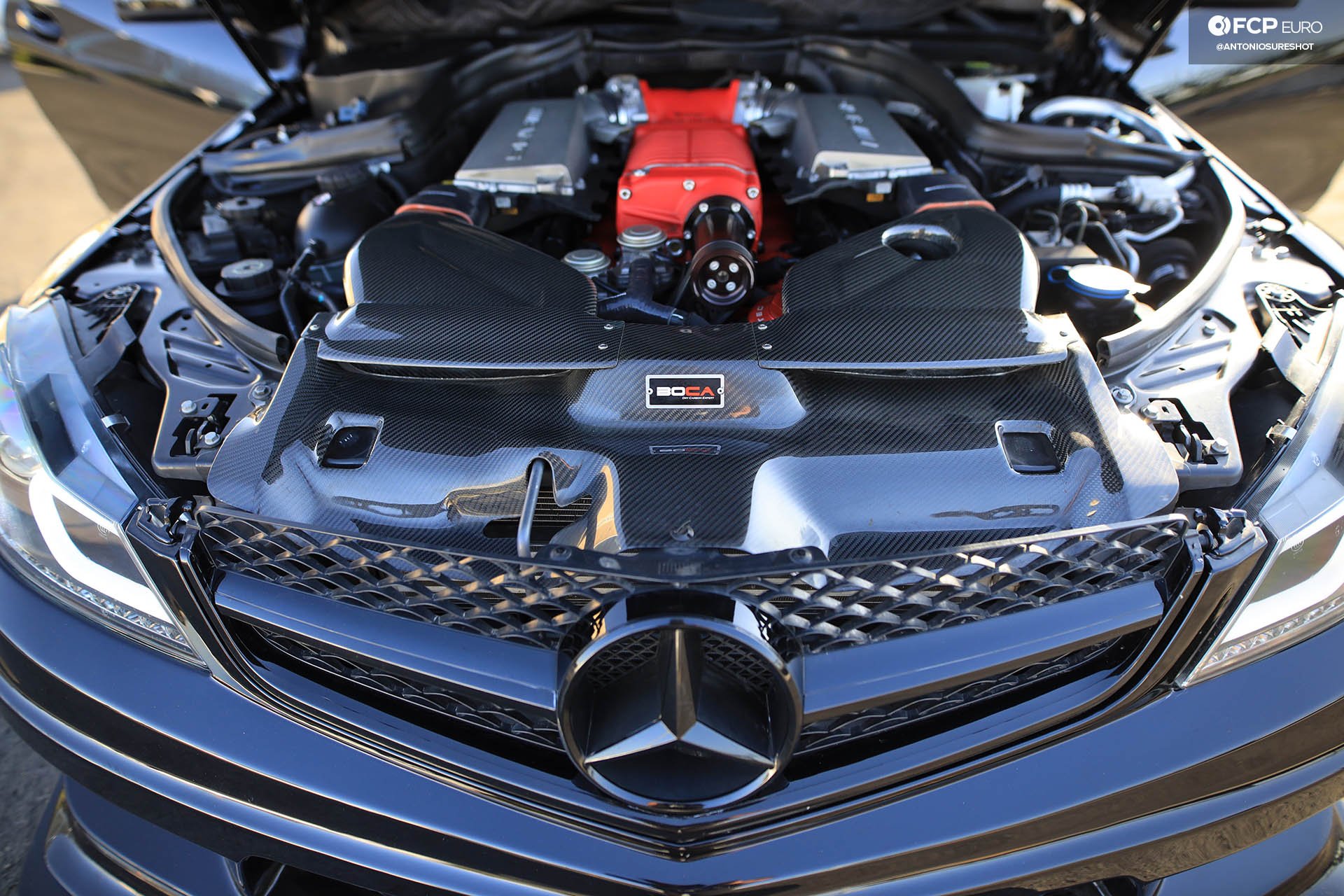 You’ve no doubt seen the Weistec decal on the windshield from the very first image and we can tell you it’s not there for nothing. Topping the AMG built M156 is their stage-three supercharger, which includes an integrated heat exchanger in the manifold to cool that supercharged air. The lines run from the back of the engine valley to a heat exchanger in the front bumper. 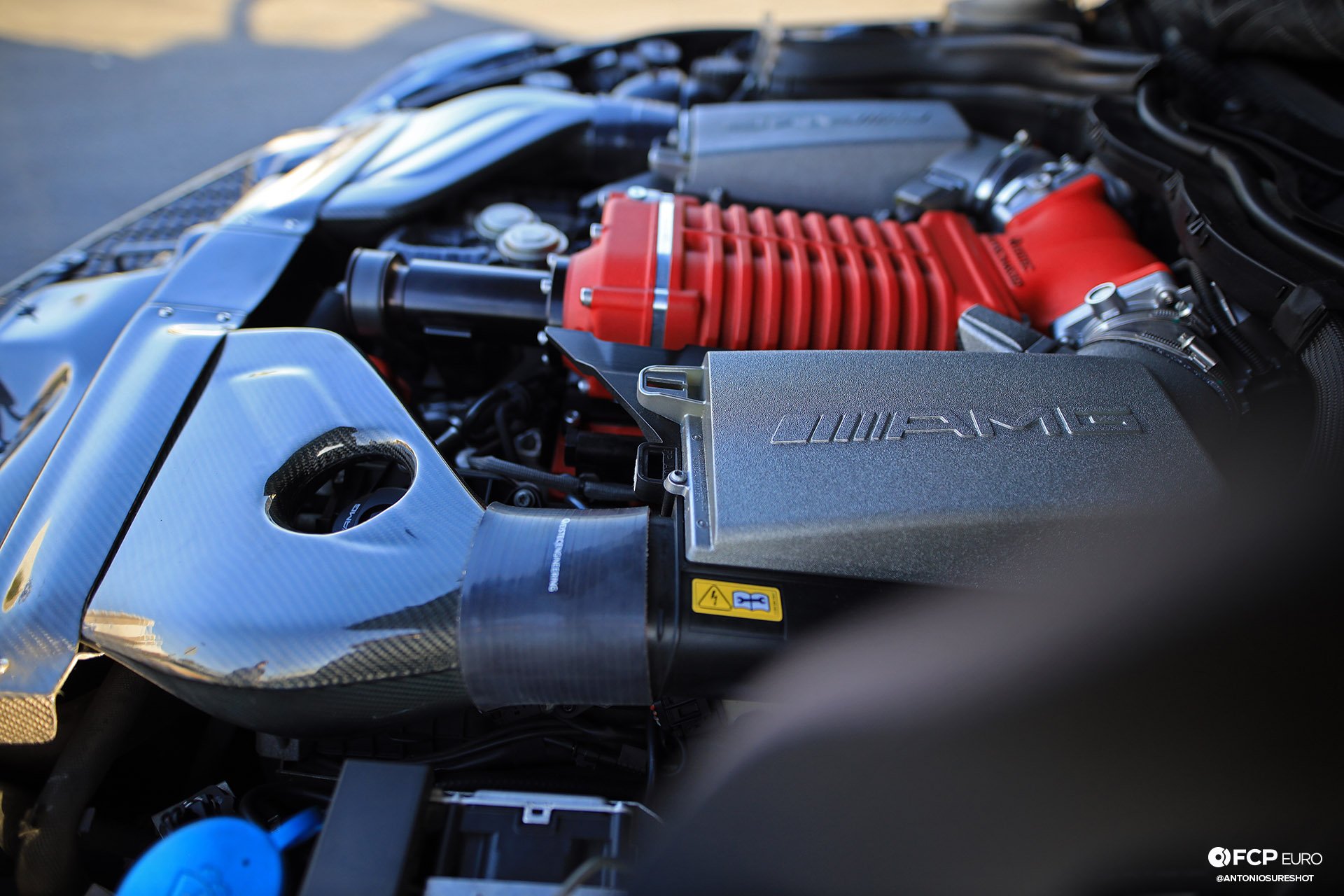 It’s made to also work with the factory dual airbox setup, which is enhanced by a Boca Design carbon fiber air intake system. This beautiful looking carbon setup is fully functional as it draws air from the grille’s upper section straight into the airboxes. 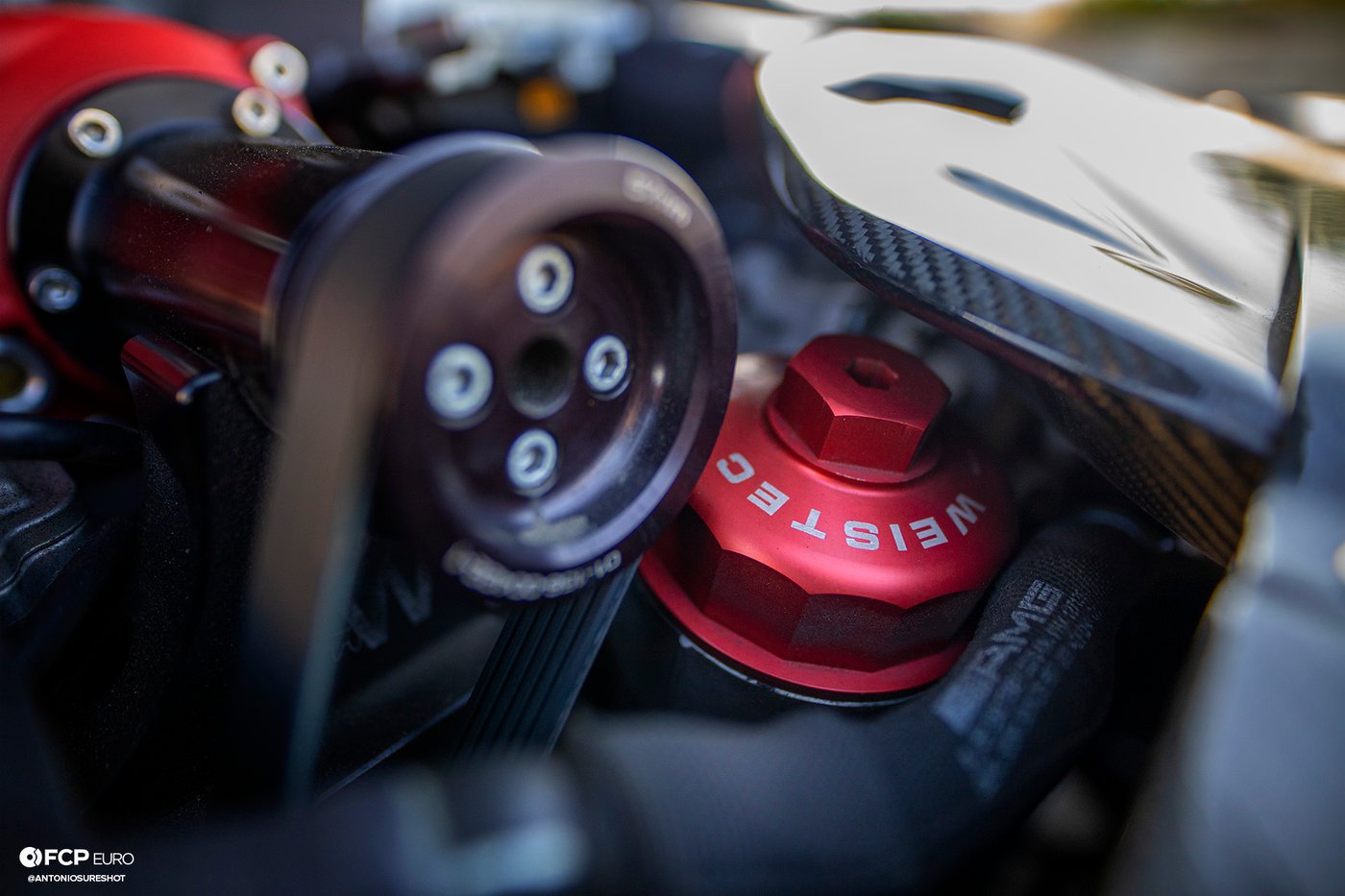 The combination of the Boca intake and Weistec supercharger kit make this C63 push out about 700-horsepower to the wheels.

In the trunk, a Diamond Audio subwoofers and amplifiers were custom-installed by Al N Ed’s Auto Sound in Encino, California. They also went the extra mile with a custom enclosure with LED lighting to draw your attention to them. The Mercedes emblem that was etched out in polycarbonate between the subwoofers is also lit by the LEDs in the subwoofer box.

As mentioned earlier, there is an Air Lift Performance suspension controller mounted to the dash. It keeps the bags of their C63 air suspension kit inflated for the right comfort and ride height for driving the horrible roads of Los Angeles. However, when the air is allowed to fully escape, the C63 lays all the way down to the Liberty Walk rockers. 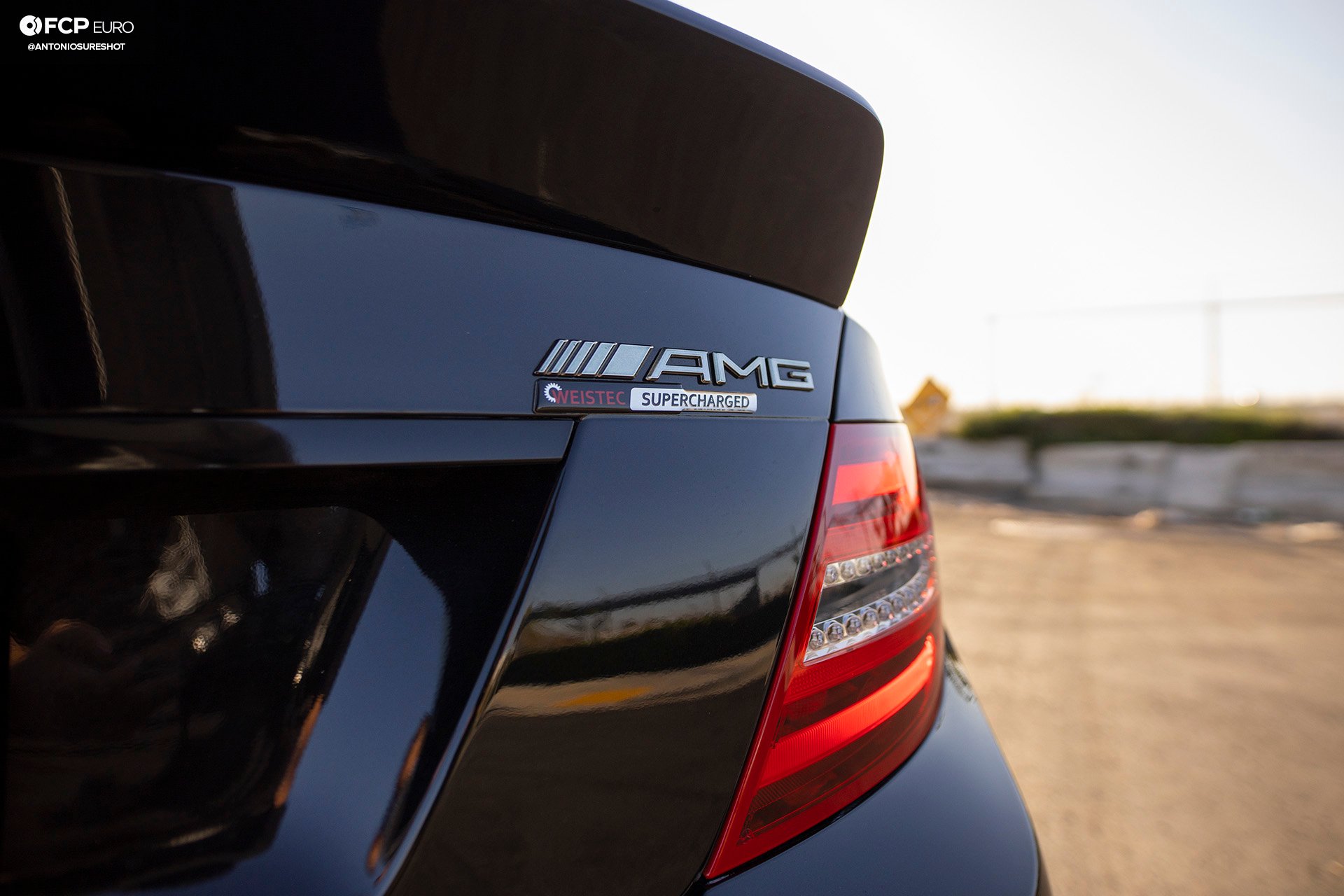 You’re also fully warned that this AMG has far more power than it had when new. Not only would unsuspecting drivers have to miss the Weistec decal on the windshield but this “Weistec Supercharged” badge that sits proudly under the AMG logo on the trunk lid. 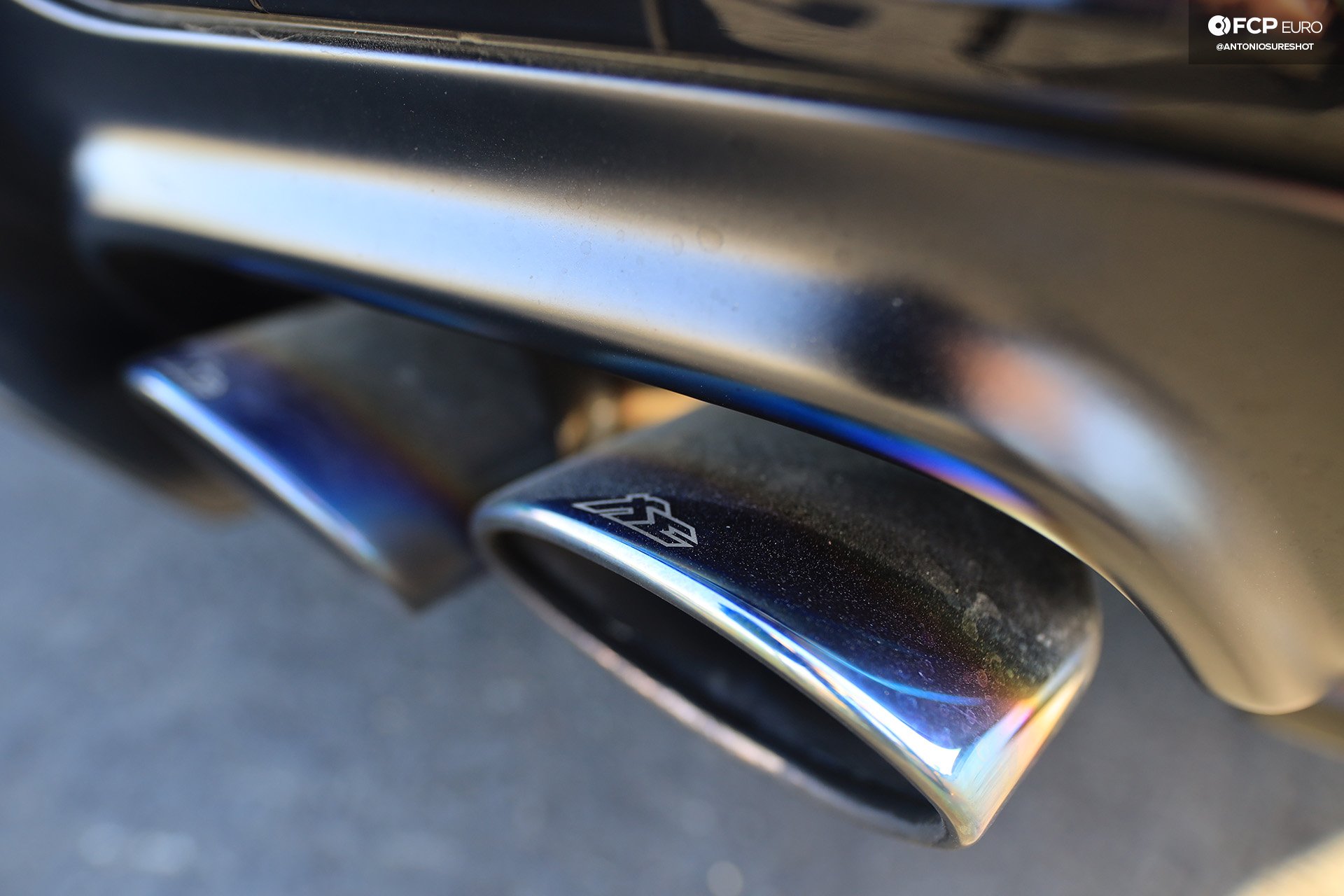 They would also have to be deaf. You can’t help but hear this AMG roar beautifully thanks to its FI Exhaust system. 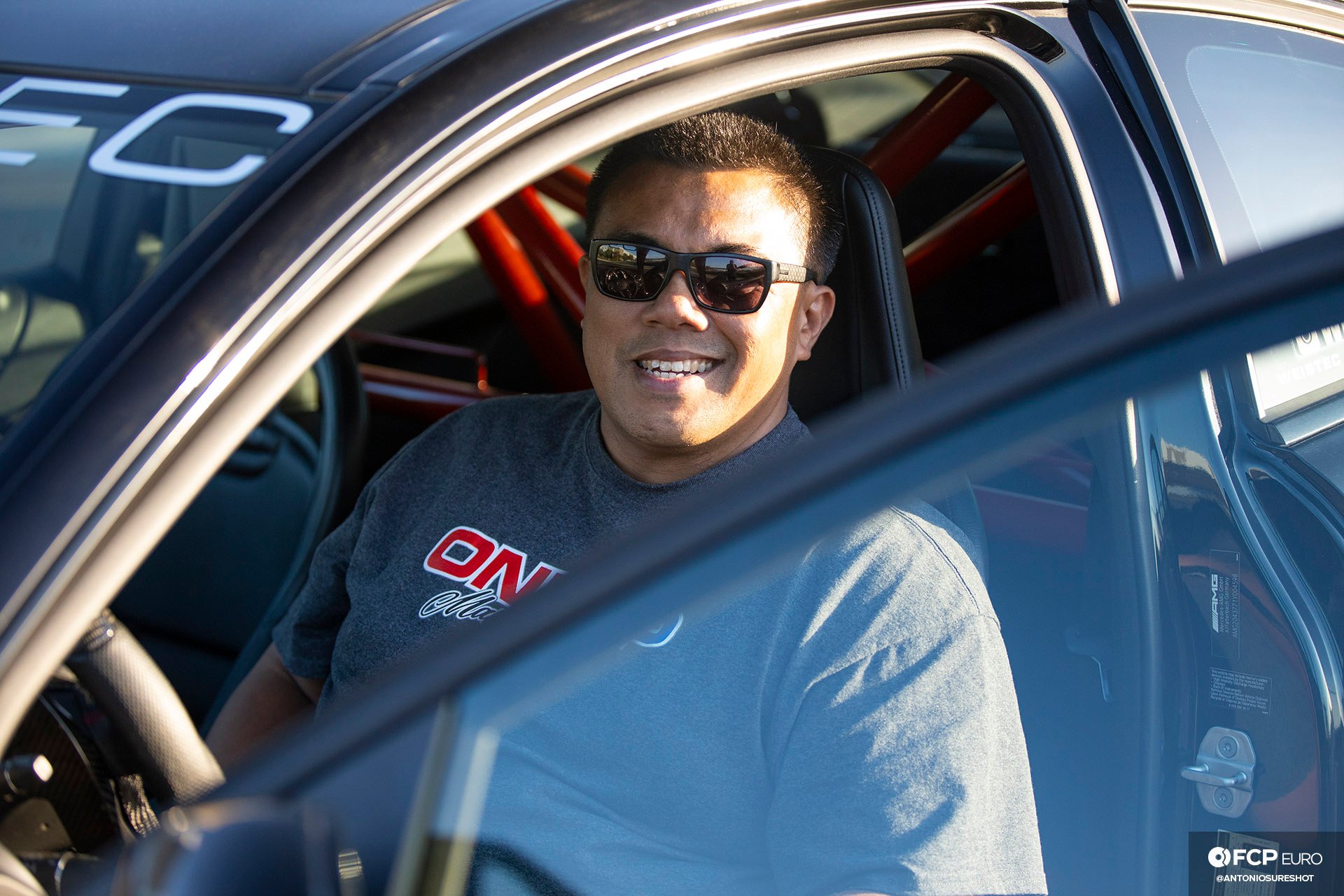 “The high points of this build,” says Nielson, “is meeting new people and reconnecting with old friends in the car industry.” It’s also been a rather smooth ride for him but that also comes with experience. This AMG C63 isn’t his first build, “There haven’t been any low points of this build but you also must know what to expect before committing to this type of thing. My first full build back in the late 1990s taught me that.”

Nielson says he doesn’t have many more mods planned for his C63, “I’ll probably remove the roll cage and rear seat delete after the SEMA Show. I’d love to let the whole family enjoy the car, too.” While Nielson wasn’t looking for an AMG, it still found him along with the need to make it unique. With this being one of only two AMG C63s in the US to install a Liberty Walk kit, he’s achieved that and more.

What’s best is that it has the power to match those looks along with the credibility of being a SEMA Show car. This is how a SEMA car should be, something that accurately depicts the power, performance, and drivability of the products it represents. Nielson’s C63 does that in spades while in Los Angeles traffic.

If you like this Mercedes-Benz C63 AMG, you can find additional Mercedes-Benz content at mercedes.fcpeuro.com, as well as more build features like this one here. If there's anything specific you would like to see, or if you have any questions/comments, leave them in the comments section below. 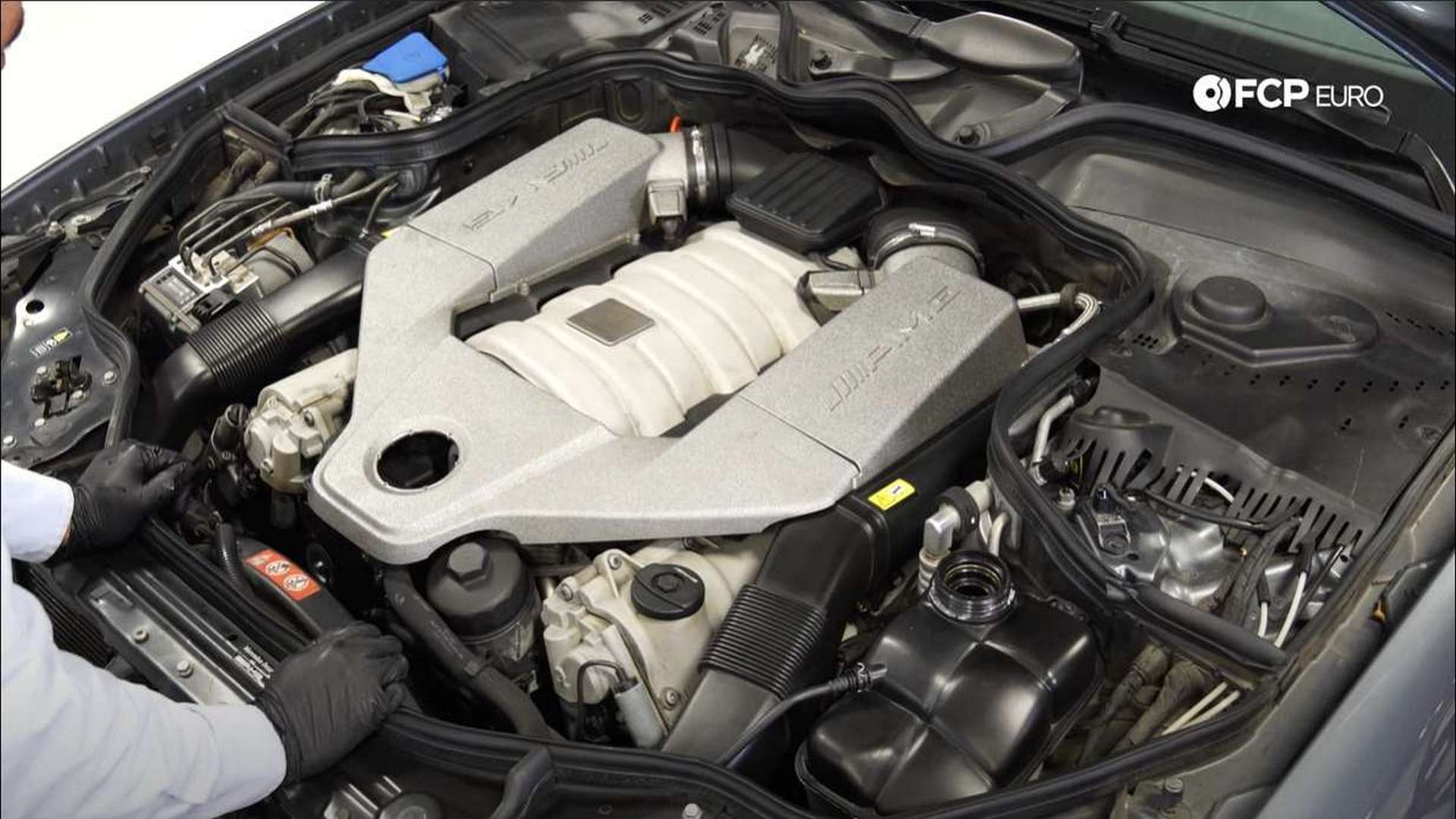 An engine should always be brought to its normal operating temperature before being leaned on in anything more than easy driving. This is especially the case with high-performance engines, such as ... 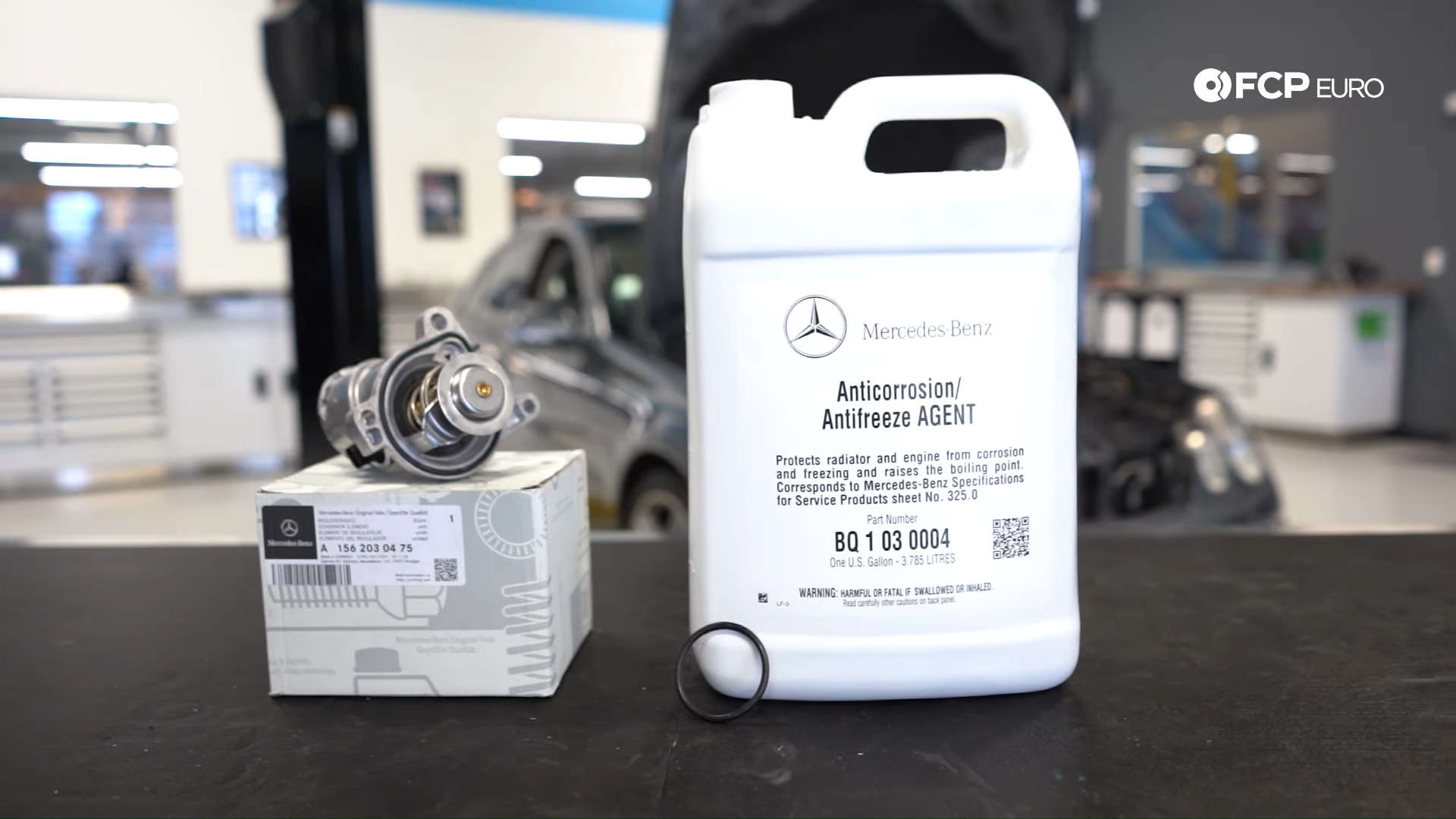 A thermostat is a simple device that regulates coolant flow through the engine. When cold, it will stay closed, stopping coolant flow to help the engine come up to temperature faster. Once up to ... 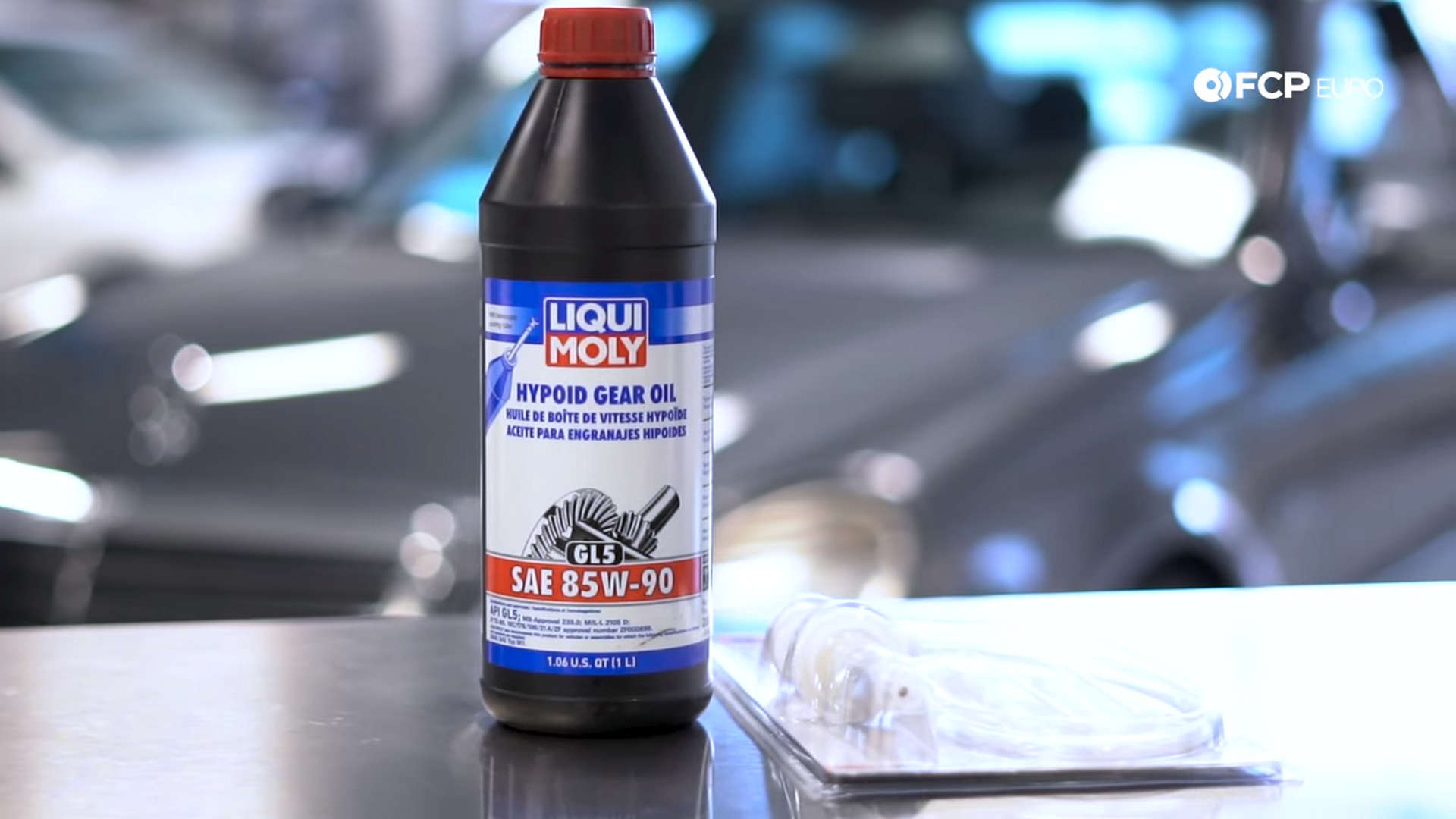 The differential is an often overlooked component on vehicles that requires regular maintenance. Something as simple as regular fluid flushes can keep your differential functioning optimally for the ...

If you're finding oil spots underneath your Mercedes-Benz, don't panic—it's probably not from your valve covers or oil pan. It's most likely your oil cooler gasket that is extremely easy to replace. ... 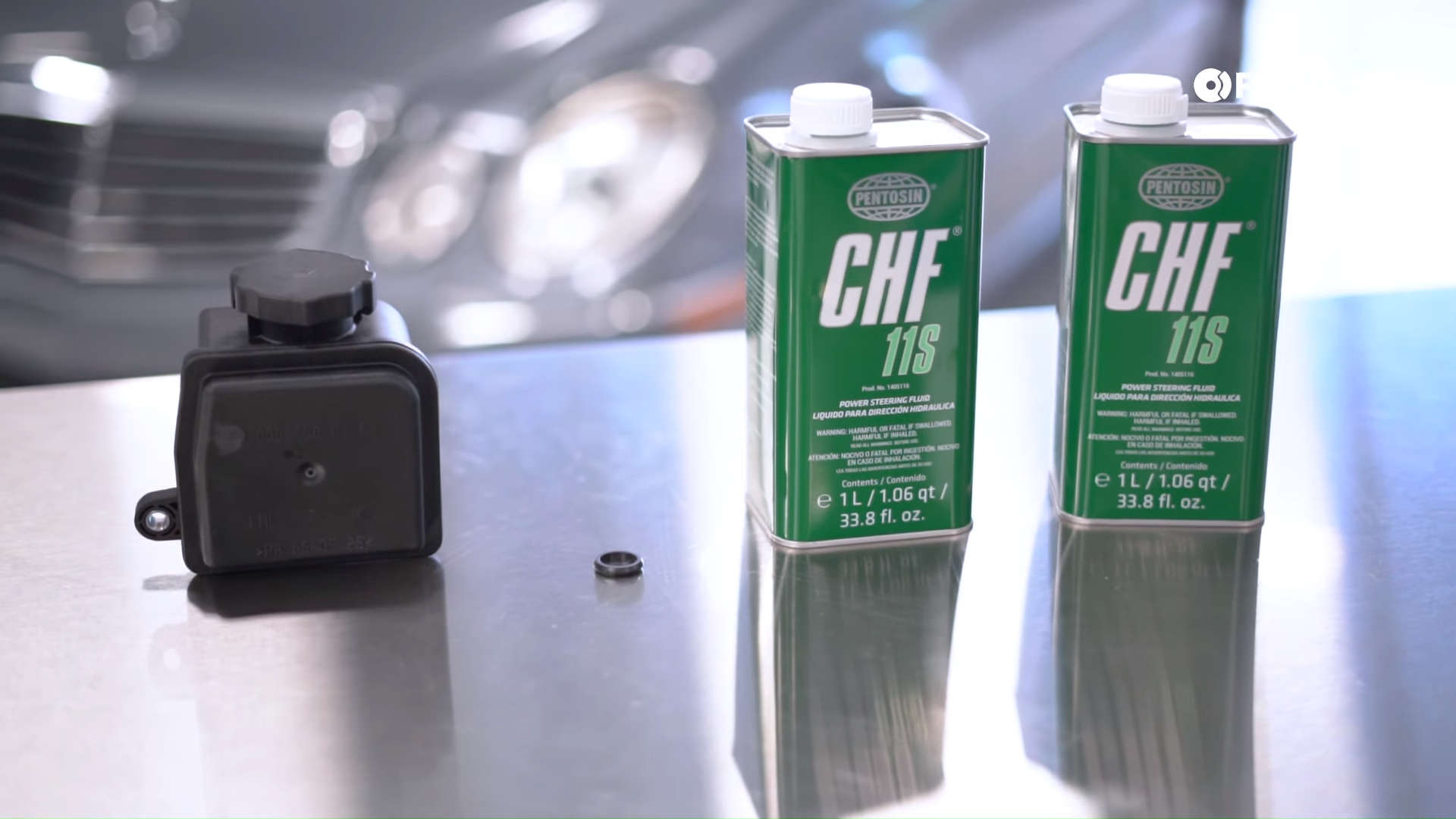 The power steering fluid reservoir on Mercedes-Benz models with the M112, M113, and M113K engines feature an integrated filter. Over time, this filter can become clogged and cause problems with your ... 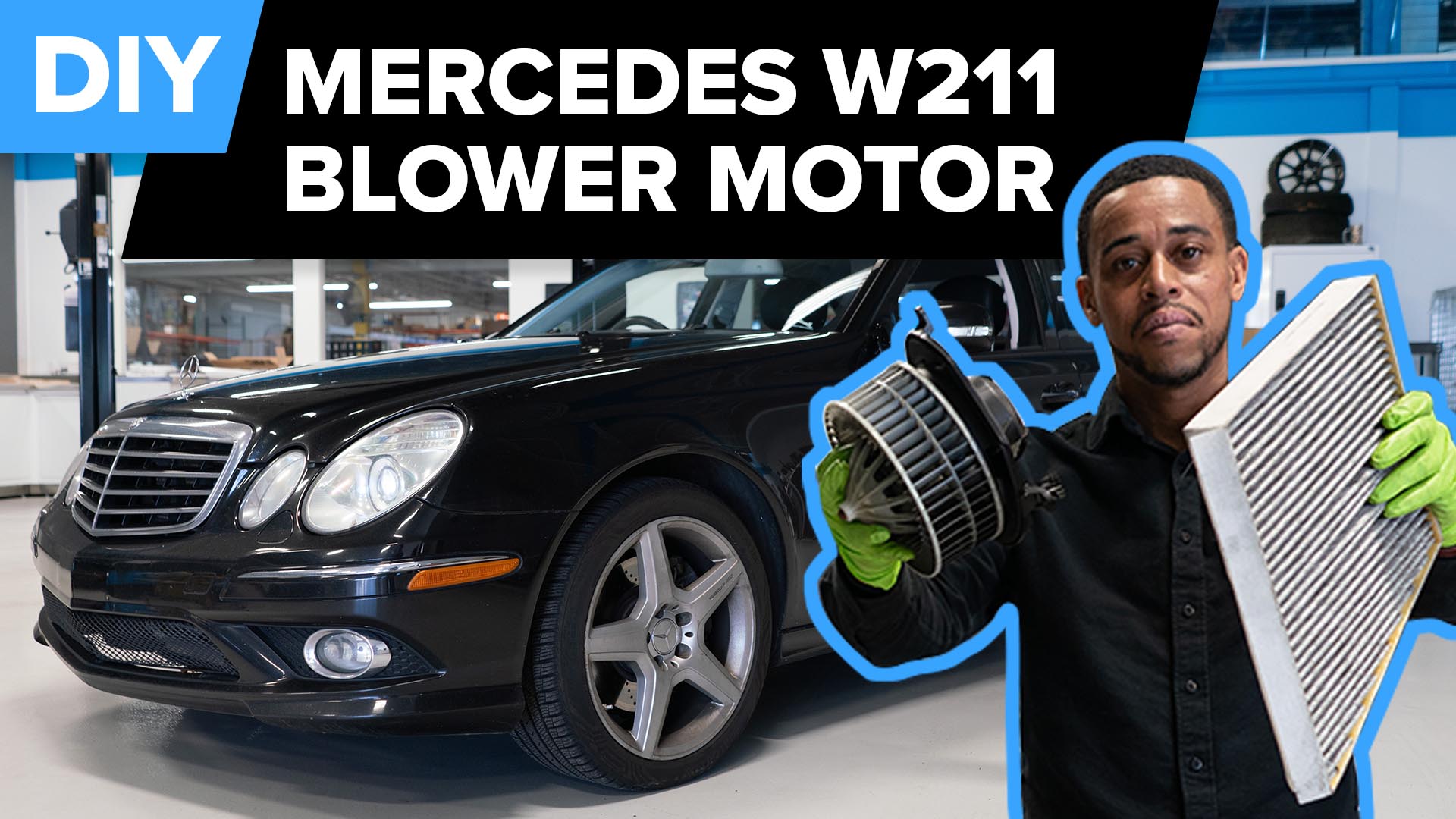 The blower motor is an essential part of your Mercedes-Benz's HVAC system or any car for that matter. It distributes hot or cold air through the ventilation system of your car. If you're experiencing ...