I spotted my beloved disaster sitting on a rural used lot instead of ancient pickups and rusted out Jeeps. “$600 Bad Transmission” was scrawled on the windshield in white paint pen. Truth in advertising.

The 1992 525i Wagon’s body was good, but the paint was awful. The engine fired right up, but the transmission showed no initiative whatsoever. The interior is surprisingly good for a car its age. My plan was to fix it up on the cheap. Real cheap. Painfully cheap. A little more than 12 months later, here’s how it has been going and what I learned along the way:

So cheap that it doesn’t matter how bad I screw it up:

At $600, I can quit this project anytime I want. In fact, my used BMW parts guy tells me I could sell the interior alone for $800. So my new mantra every time I work on this car: “I can part you out and make money. Give me just one excuse and you will become about 30 eBay listings and my wife will get her garage parking space back.” Knowing that I could always punt the car for a profit has given me the confidence to try projects that I might not attempt on a nicer car: I swapped the transmission with the help of a buddy and and some visiting relatives, I am getting ready to do my first-ever head gasket job, and I am even going to try painting. It’s a $600 car! I can do whatever I want to it.

E34 Cars Are Actually Fun To Wrench On

Compared to my E39 wagon, which is rather similar but somehow much more complicated, the e34 is a really fun car to work on. It has good space under the hood, it has a minimum of hoses and wires, its new parts are pretty affordable, and there is a lot of crossover with the popular E36 platform when dealing with engine and driveline work. 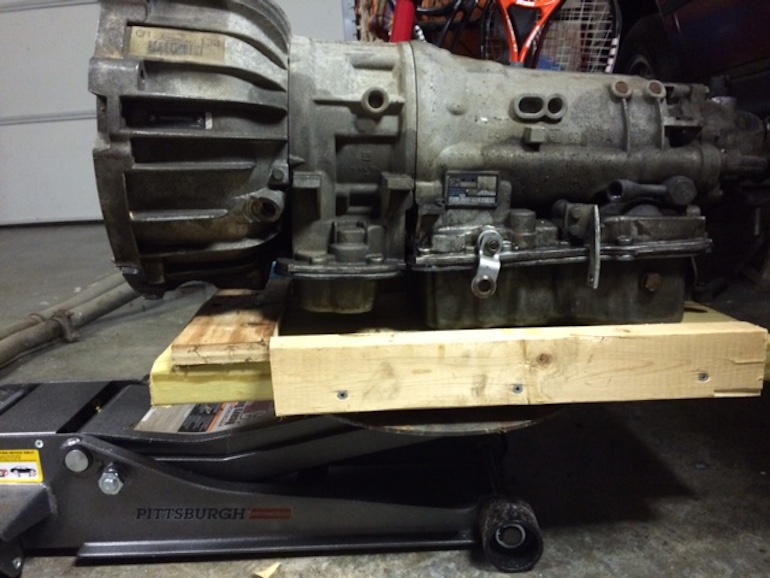 Mercy is a Destroyed Transmission

When I got the car home, I first set about pulling the transmission pan. What a disaster. I found everything from fine metal shavings to huge chunks in there. (A later tear down found an assortment of failed bearing races and chipped planetary gears.) I was actually glad that the pan-full-o-metal diagnosis was so easy. I read many long and drawn-out stories on the message boards of owners trying to track down that one iffy solenoid or a cracked trans computer wire. Not my car. This transmission was lunched, and I knew what I had to do to fix it. 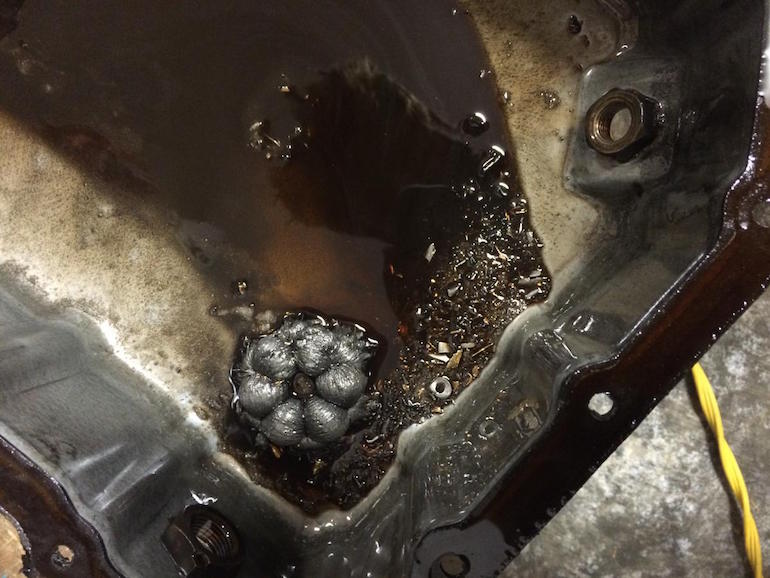 I found a BMW dismantler about 1.5 hours from my house, and they were able to sell a test-driven transmission from a 1993 525i for $300. It came with no warranty, but they did let me pull the ATF pan to inspect it for chunks and debris. For about $800, I could have bought a complete used manual transmission swap kit, but I could not see spending more than the purchase price of the car on just the transmission. If I decide to hold onto the car, I might consider it. Though it’s a good highway transmission, the 4L30E Transmission transmission is brutally dull in stop/go driving.

I Learned How to Spot a Stalled Project

By the fall of last year, I was moving along with the transmission removal, but then life hit: My dog had a spinal injury and needed surgery and rehabilitation. Then I discovered coolant pooling in two cylinders,from what appears to be a blown head gasket. I was demoralized and stopped working on the car for a couple months. Pretty soon I was using the wagon's interior to hide my kids’ Christmas gifts, and the body was being used as a shelf in my garage. I kept tripping over the used transmission, too—all signs that my project had stalled.

I Learned How to Jump start a Stalled Project

I made a spreadsheet and added up what I thought I could sell the parts of this car for: Somewhere between $2,000 and $3,000. But someone on the forums convinced me to try using a bottle of silica-based head gasket sealer. For $35 plus an hour of my time, I figured it was worth a shot.I won’t say it fixed my engine, but it got it to stop spewing white smoke. The car still has low compression on two cylinders, but the engine was driveable enough to proceed with putting the transmission back in. It drove for about 1,000 miles on the fix-in-a-bottle before the head gasket could no longer be ignored.

Over the Christmas Break, I spent a few nights wrenching furiously with my nephew and brother-in-law to get the replacement transmission reinstalled and hooked up. Here is video of its maiden voyage out of my garage.There were many times that I did not think this would happen:

My Original Budget of $1000 was unrealistic

So far, I am probably about $1,300 into the project,including the car. I am self-taught when it comes to fixing cars, so the price does not nearly come close to hinting at how much time I have spent with this project. If I were trying to do this for profit, I would have lost my shirt along time ago. This is purely for fun, because I am constantly learning what I'm capable of repairing. I strongly recommend a $600 beater to anyone who wants to learn how to work on cars themselves: You probably can’t break it any worse than how you bought it.

Stay Tuned: I'm attempting my first ever head gasket job (complete with unexpected problems!), and I may even try painting this thing.