It’s March 17, 2022, at Sebring International Raceway and Trevor Andrusko is getting behind the wheel of the #55 FCP Euro AMG GT4 for the third time ever. “Radio check, radio check” comes in from Race Engineer, Nate Vincent, his first time occupying the role. As Andrusko and Vincent scan their competition before the start of the race, teams with more experience, better equipment, and faster cars share the same grid. Yet, thirty-five minutes into the race, Andrusko and Vincent are as confident as ever in their potential to finish the race in the top five, only to have it completely washed away an hour later.

Why the sudden change? Race strategy - an immensely complicated and calculated guess as to what will happen in the race, and how it can make or break a team’s weekend.

This past weekend at Sebring International Raceway was one of the biggest events on the world racing calendar. Four completely separate racing series shared the same eighty-year-old facility at the same time to create an unforgettable experience for fans, crew, and drivers alike. The prestige, pressure, and requisite stakes for the weekend among all competitors in every class were high.

Race strategy, in its simplest form, can be defined as an “educated gamble” within the rules and regulations of the particular series that every team is racing within. Since sprint races, as an example, only run for roughly forty minutes, cars have enough fuel within their tanks to make it the entire race without refueling, making pit stops unnecessary. In this case, more emphasis is placed on race pace (having the driver and car go as fast as possible) along with tire management (ensuring the tires don’t wear out too much before the checkered flag).

Endurance racing, however, is a much different challenge. Since race duration varies between two hours and twenty-four hours, teams have to refuel, change tires, and change drivers in order to stay competitive at the front of the field. When you pit, and how you pit, is where the complicated game of guesswork and gambling come into defining a race strategy. 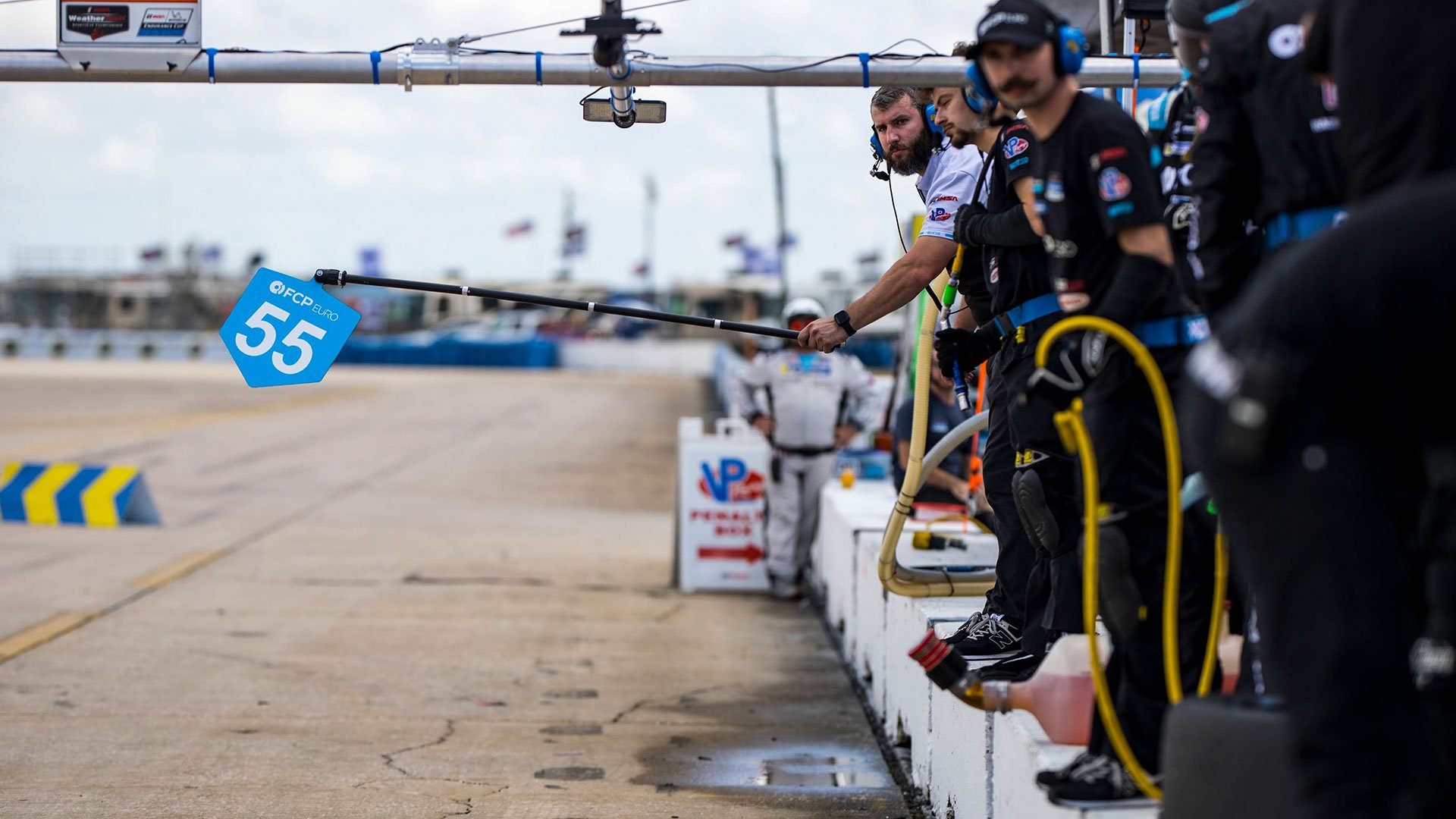 Imagine a scenario where every car had the same fuel economy, tire wear, and the race went uninterrupted from green flag to checkered flag for two hours. Most teams would do a pit stop around the sixty-minute mark (halfway) into the race to change drivers, tires, and fuel up to make it to the end of the race (IMSA does its best to ensure no car can make it to the 60-minute mark on green flag racing, adding additional complexity to the race strategy). 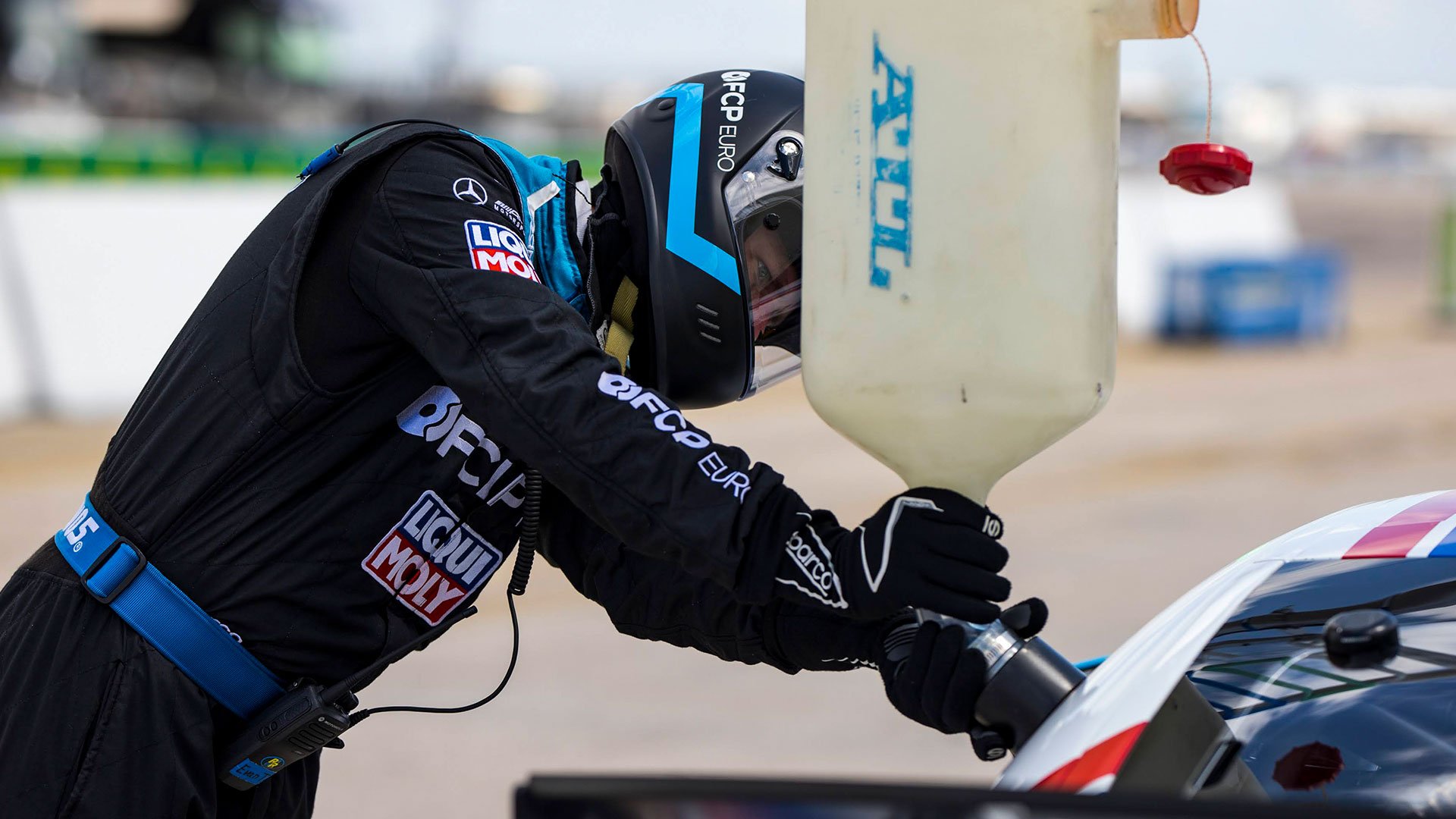 Endurance racing, however, is anything but that perfect scenario. There are dozens of variables that influence strategy within a team’s control, and a handful that aren’t.

First off, all cars burn fuel and tires at different rates, forcing them to pit at different times depending on that usage. FCP Euro’s AMG, for example, lasts fifty-five minutes at race pace until it has to refuel, but a Camaro GT4 might last only fifty minutes, with a Cayman lasting longer than the Mercedes. Depending on track conditions, vehicle setup, chassis geometry, and driver style, all cars wear tires differently which also influences when and how teams will pit. Where drivers are in the lineup, and how hard they’re pushing the car will also influence fuel and tire degradation. A car that’s defending for the lead at the front of the pack, for example, would use more tires and fuel than someone who is drafting behind.

Crashes, most notably, are the biggest thing that influences strategy outside of a team’s control. Full-course yellows slow the field down, conserving fuel and tires, extending the time a vehicle can run without entering the pits. Weather is another unpredictable variable, which could cause teams to change their strategy entirely depending on when and how much rain will fall. And yes, of course, teams can use data like weather forecasts and statistics regarding when and how many yellow flags will happen during a race, but ultimately it’s just guesswork.

So, how did all of this actually translate into what Andrusko and Vincent were feeling at the thirty-five-minute mark? 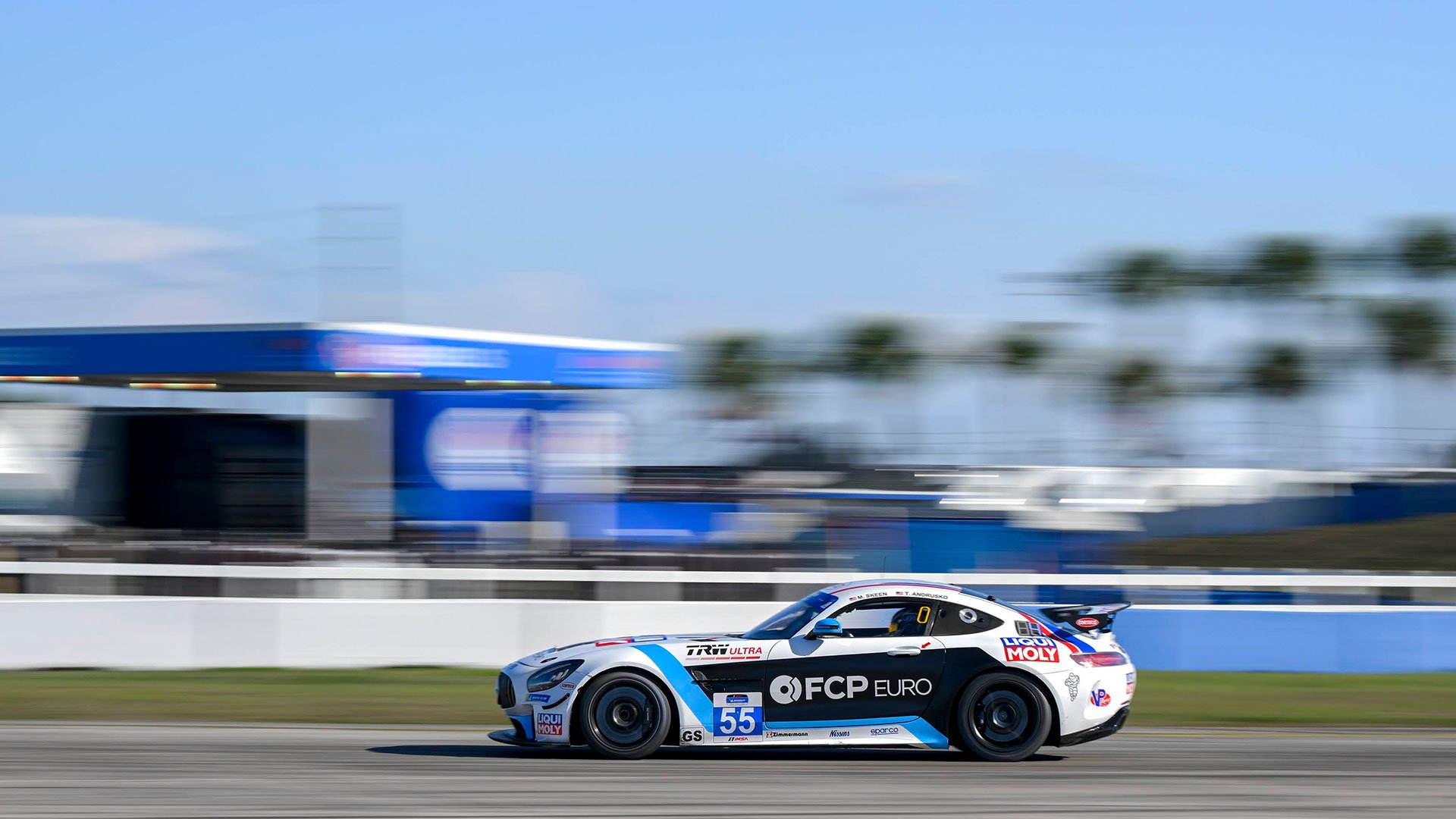 FCP Euro’s #55 AMG-GT4 is relatively moderate on fuel consumption, being able to run for (ironically) fifty-five minutes at race pace before running out of gas. Since this weekend at Sebring had the most cars ever entered into the Michelin Pilot Challenge, chances were high the first half of the race would be littered with crashes and yellow flags. The team strategized that, with a strong starting driver like Andrusko and a fuel-efficient Mercedes, they could focus on conservation to target a single pit stop changing tires, drivers, and filling up with fuel to get them to the end of the race. If no crashes happened in the second half of the race, they could rely on the single stop to carry them all the way to the checkered flag, ahead of teams that stopped twice. After Andrusko qualified eighth, the team was off to a good start.

With a strong stint from Andrusko running in the top-ten all morning, Mike Skeen entered pit lane under a third full-course caution in the #55 AMG in third place, exiting it in nineteenth. When any team pits they'll normally lose track position, but so long as other teams have to pit, that position can easily be regained. The gamble that FCP Euro took was the hope the rest of the race would be under green. If this happened, competitors who pitted earlier in the race would be forced to pit again and top up for fuel, otherwise, they’d run out before the end of the race. If there was a crash or a yellow flag, it’d give the field a chance to slow down, conserve fuel, and make it the full race without an additional pit stop.

With just ten minutes left in the race, one of the cars in the GS class lost its brakes and went into a wall, causing the late full-course yellow that FCP Euro hoped wouldn't happen. Since the impact and requisite damage were so bad, it prolonged the yellow, allowing teams to save even more fuel. Since other teams didn't pit, FCP Euro's hopes of gaining position with pit strategy vanished, and the attention shifted to just speed alone. Skeen valiantly climbed from nineteenth to fourteenth, but failed to crack the top-ten by the time the checkered flag flew at the two-hour mark. 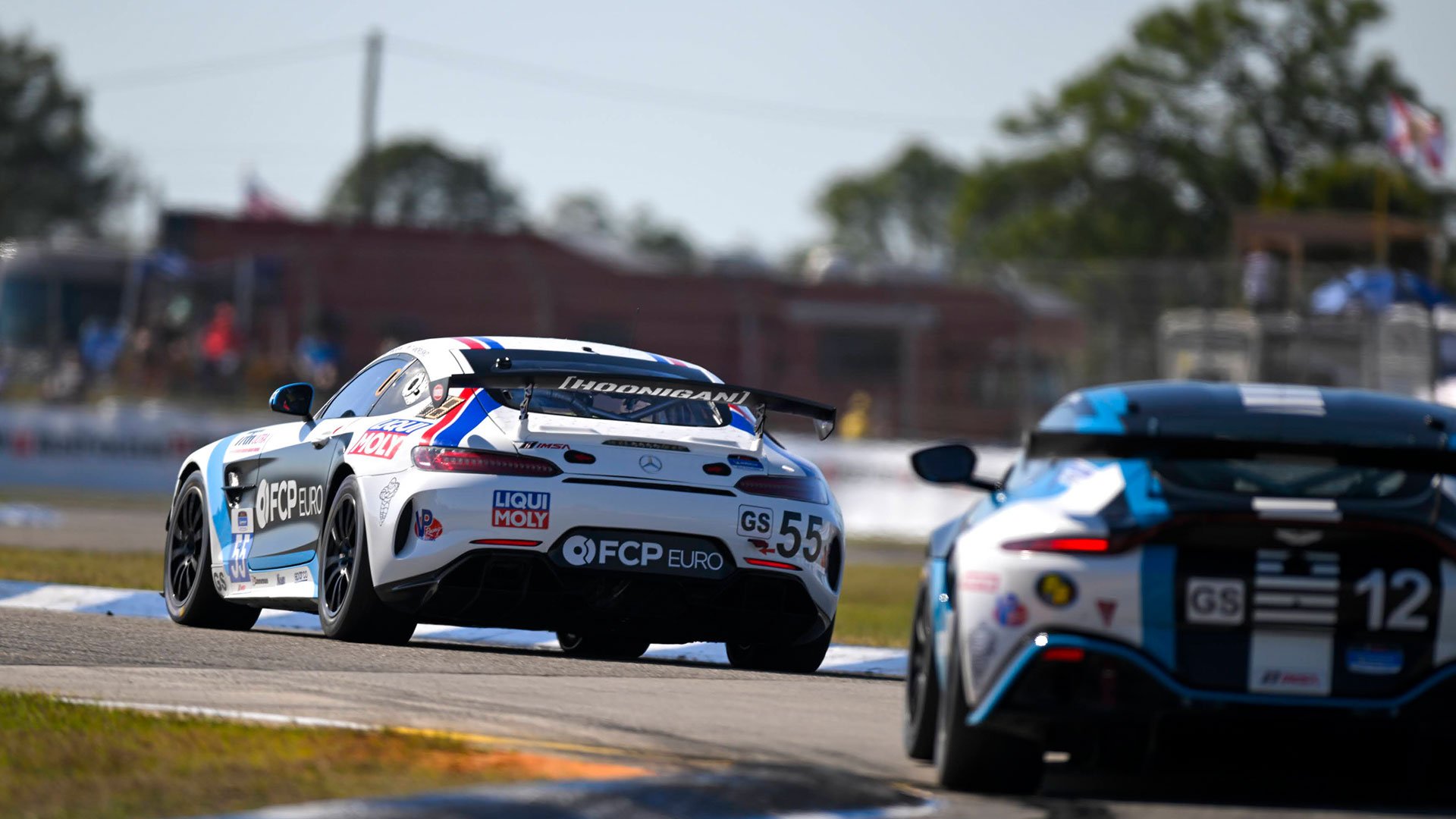 For this weekend, in particular, FCP Euro’s strategy didn’t pan out. The team still showed strong pace for their first showing, and brought the car back home in one piece, ready to improve for the next one. In racing, that’s a victory in itself.

Yes, endurance racing is vastly more complicated, and risky than the sprint races FCP Euro used to participate in. But those same risks that make it harder to win, also make it more likely to win, and truly give all teams a fighting chance at a top-ten, a podium, or even a race win. For a relatively new team like FCP Euro, all those risks are worth taking.